In this episode, Jeremy Clarkson is in Sweden driving the new Lamborghini Urus SUV, James May is at the Eboladrome trying the Alpine A110 sports car, and Richard Hammond profiles Scottish racing driver Jim Clark, arguably the greatest racer of any generation.

I would say Jim Clark tribute was awesome & to see Ayrton Senna paying respect to him was quite emotional. The rest of the show with car reviews was average especially the Lamborghini urus felt like the older episode with the Ferrari ff. Alpine A110, James may ruined it. All I can say the show was generic, with less comedy & more of a car show.
M

This was a considerable improvement over the last few episodes. No cringe-worthy comedy, interesting cars, and Richard Hammond's tribute to Jim Clark was superb. It's actually shocking how tonally inconsistent this show has become.

Finally... a Good episode.
I wish, that the show was more consistent like this.
Jim Clark tribute was very good.

I thought this was an overall satisfying episode, the highlight of course being the outstanding Jim Clark tribute, no doubt. They still know how to do it. I actually read up a bit about him because of course I knew his name but that was it. I had no idea he was such an icon at the time and beyond. Too bad that they didn't mention his probably best race, the 1967 Italian Grand Prix in Monza, where he was lapped due to a puncture, and still fought his way back to the top, only to be stopped by a faulty fuel pump. In the end, he still made third place.

Jeremy's shenanigans in the snow were also entertaining for me but I had a bit of a problem with James' review of the Alpine. He seemed to be unenthusiastic with the test and sorry but I'd bet money that he wasn't doing the drifts himself. Somehow such reviews don't fit James, that's not the kind of car you associate him with. It's what I'd consider a review mismatch between car and reviewer.
H

MacGuffin said:
He seemed to be unenthusiastic with the test and sorry but I'd bet money that he wasn't doing the drifts himself.
Click to expand...

Of course it wasn't James doing the drifting. Whenever there's drifting in a James review you never see him do it from in the car and you can never see the driver from the external shots. It's been done several times before including Top Gear. I actually liked his review of the Alpine and thought it was better than Jeremy's review of the Lambo, which was still half decent. Hammond's Jim Clark Segment was obviously the star of the show and the best thing from series 3 so far.

For me, this was more of an earlier old Top Gear type show and was better for it. Liking the guest segment being removed as well. Give it an 8.

I've always thought the original A110 was one of the coolest, best-looking cars ever made, and when I saw the new one, I was fairly happy with the look. Nice to see James' take on it, despite already having seen Chris Harris burn one up a long time ago. Predictably, Clarkson and Hammond whined about it afterwards.

Richard's rant about the horse was pretty amusing. Plus, it made Conversation Street feel a little longer than usual, which was nice.

Good to see the Urus, though my interest in it went down a lot when it went from good looking concept to the nearly-the-same-but-they-uglified-the-front-which-is-the-most-important-part! production look. I generally don't care about any SUV...but it's a Lambo, so there's always some interest there. It was impressive going up that hill. The race was somewhat pointless and definitely juvenile. Good review overall, though.

I had a quick go at improving the front end a bit... 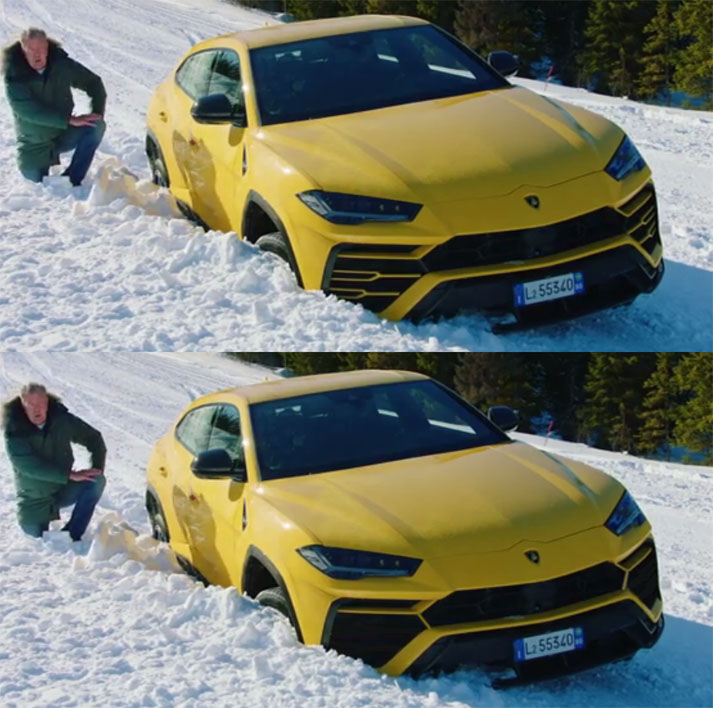 Minimal change, but I like it better. Would be easy to do for real, I would think.

The feature on Jim Clark was outstanding. I'm not up on my F1 history too much and I really appreciated it. What an amazing driver!

I'll give this one a 9, mostly for the mini-documentary on Clark.

Great episode, even Dicky was enjoyable.

If I'm being picky, James pixelated/frosted windscreen during the drifting is a bit annoying.
Last edited: Feb 8, 2019

Great episode! Not that there hasn't been any better in the past years, but this was quality. Two solid reviews, interesting conversation and a fantastic historical segment whose duration I hardly noticed; it really grabbed my attention fully. This is what the show should look like. It was that much better than many other episodes that I had to award it a full 10.

Best episode of this season, and maybe best of the last 2 seasons.
Big fan of the A110, and the historical film on Jim Clark.

This has to be the best of the series so far. We have 13 or so episodes to get through so who knows where things could go from here. This is the most traditional Top Gear episode minus the cool wall and SIARPC. I need more episodes like. Conversation street was really good if a bit side with Hammonds quite specific story. Regardless, 10/10 for me. The Jim Clark bit brought a tear to my eye. Really enjoyed seeing Abbie in a different environment and hope she gets more screen time with special VT’s like this one. I was hoping to see a Range Rover do the same hill for a comparison instead of a “just take my word for it” with the Urus.

Solid episode, maybe the best of GT so far

Just felt like proper, old school TG. I know they are trying to please a dumbed down mass audience but more like this and less of the bollocks from last week would be appreciated.

Finally got round to watching it and that really was a great episode. Memorable, in fact; something that seems to be quite rare these days with TG or TGT. I was won over by the A110 in James' video, I know it's an old car now but relative to the original it may as well be brand new and I don't remember it being described the same way anywhere else. I totally get the theory and I'd buy one to sit alongside my Smart if I could afford it.

Somehow the ape pulled off and informative and entertaining video without making me throw things around the room. The ski slope challenge was a bit daft and the shot of him stuck in the snow was with the car facing downhill but the race at the Cockodrome made up for it. It's actually an impressive car, no matter how stupid I think most modern super-SUVs are.

The Jim Clark film was epic, one of the finest segments they've done. I enjoyed the geeky details like how they had lots of original footage but in high resolution rather than grainy postage stamp clips. It could've got boring if they went through 1966 and 1967 but those details are available elsewhere, this seemed perfect.

Now let's see them fuck it up this week...

I’ll be honest, i thought alpine was like RUF, modded Porsche’s. Oh how I was wrong.

Jim Clark bit brought a tear to my eye.

If the GT guys stumble down here at some point...

This was worth me logging in to this site to say how great the episode was.

I know you're making a 'show for everybody' and having episodes to appeal to the 8 year olds, the 18 year olds and so on... but this 'episode' was utterly brilliant. I don't care that the car has been out for awhile or that Jeremy doesn't know how to stand up in snow. Everything just... fit. It was entertaining, it was informative, it was well shot - nothing lingered past its' best-before time. Just a crisp, sharp episode. The penis track was a 'quick, cheap laugh' as opposed to the setup for a 25 minute joke that gets un-funny past 30 seconds as is the case in some other episodes.


I loved this episode. I don't want to watch any others for awhile and just let this one sink in. Best episode of the grand tour so far, all seasons inclusive. This was worth the prime membership for the year all on its own.

Very much better than expected. After the previous episode, I was about to never see another ep of TGT again, but positive opinions in the chat convinced me to try this episode. I was not disappointed.

My favourite episode of this season so far, because there wasn't a single bad moment anywhere in the show. The Alpine review was a much welcome change from all the super-expensive supercars they've been testing since the start of the show. My views of the A110 are the same as May. It's a no-nonsense sports car for true petrolheads and not for posers or badge snobs. I was expecting a comparison between the A110 and the Alfa 4C in conversation street seeing how they're very similar in so many ways, but maybe they forgot.

Speaking of conversation street, Hammond's horse rant suggested that something hysterical had definitely happened at some point in his life involving horses.

The Urus review was my favourite, mainly because of the location, and partly because it actually made me like that car a bit. I mean I still hate it but I hate it less than before. And hearing the Urus raping the revlimiter mid-drift while chasing the 911 Turbo on snow was my highlight of the show. Even the track with its special corner names was, for once, worth a giggle.

The Jim Clark tribute was beautifully done. Which goes to show that no matter how cringe-worthy and unfunny the other films are, when it comes to historical films like this one (and the Lancia vs Audi and Ferrari vs Ford films) they just won't mess about and bring out everything they have to make as good a film as they can. I got to learn so much about Jim, Lotus and F1 of that era in general. You could extend this from 20 minutes to 1 hour and pass it off as a documentary and nobody would say this was from a comedy car show such as GT.