The hole stopped the bolt from coming out the normal way
Click to expand...

Regardless, very nice work to date!

The hole stopped the bolt from coming out the normal way
Click to expand...

Regardless, very nice work to date!

Regardless, very nice work to date!
Click to expand...

The hole was on the other edge of the bolt hole. The chassis rail had a cylinder with threads in it for the bolt. You can see it still on the crossmember in the before picture(bottom of the member). The rust hole was located so that when you tried to open the bolt the inside snapped off the chassis rail. That tiny hole was in the worst possible spot. I suppose I'll cut out a bigger square piece out and make the holes for the bolts again. No sense in putting tiny patch next to a tiny patch.

I got over to a local scrap metal place for some steel. Keep in mind I needed about 5cm x 5cm. This is the smallest piece they had.
I'll be giving half of it to a friend. 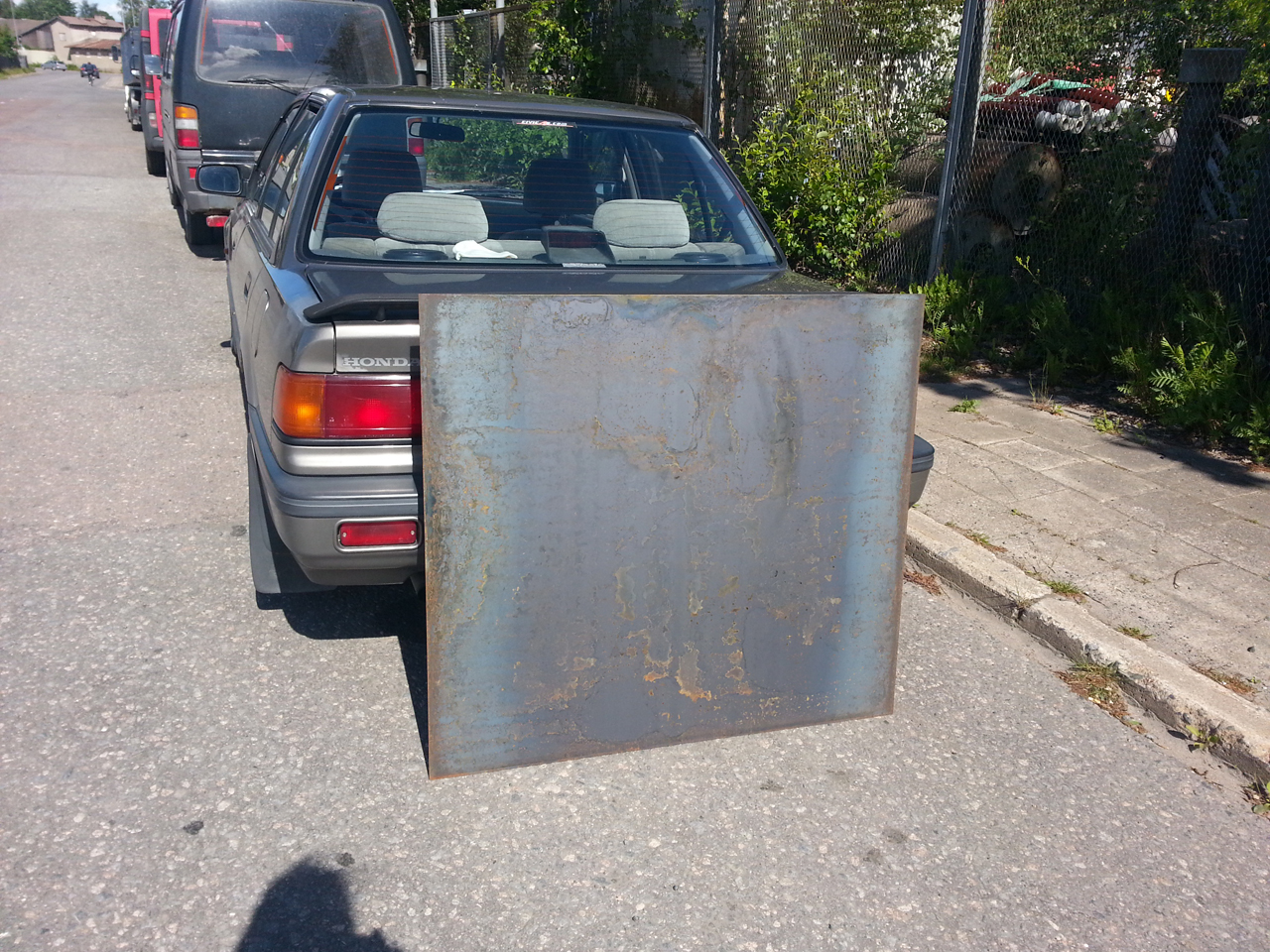 Got it sorted. A few days ago, been lazy to post(as always).

The problem was arond one hole. This particular part of the car I had a friend of a friend work on back in 2008 and he didn't do a very good job rather surprisingly since he is a professional. Patch work complemented with bondo. With the friend I had giving me a hand we both agreed that the best thing would be to deal with the problem properly and not just the rust around the one bolt hole. Sadly I don't have a before picture, and even the after one could look a bit cleaner. The 2mm sheet metal was a mistake, since as it turned out they used 1mm metal. Getting the piece welded in was harder than it should have been. But it's there and it won't be falling off!

The piece. This is after we had tacked it in to get the bolt holes right. As said, bigger than was needed. But at least it's done properly. 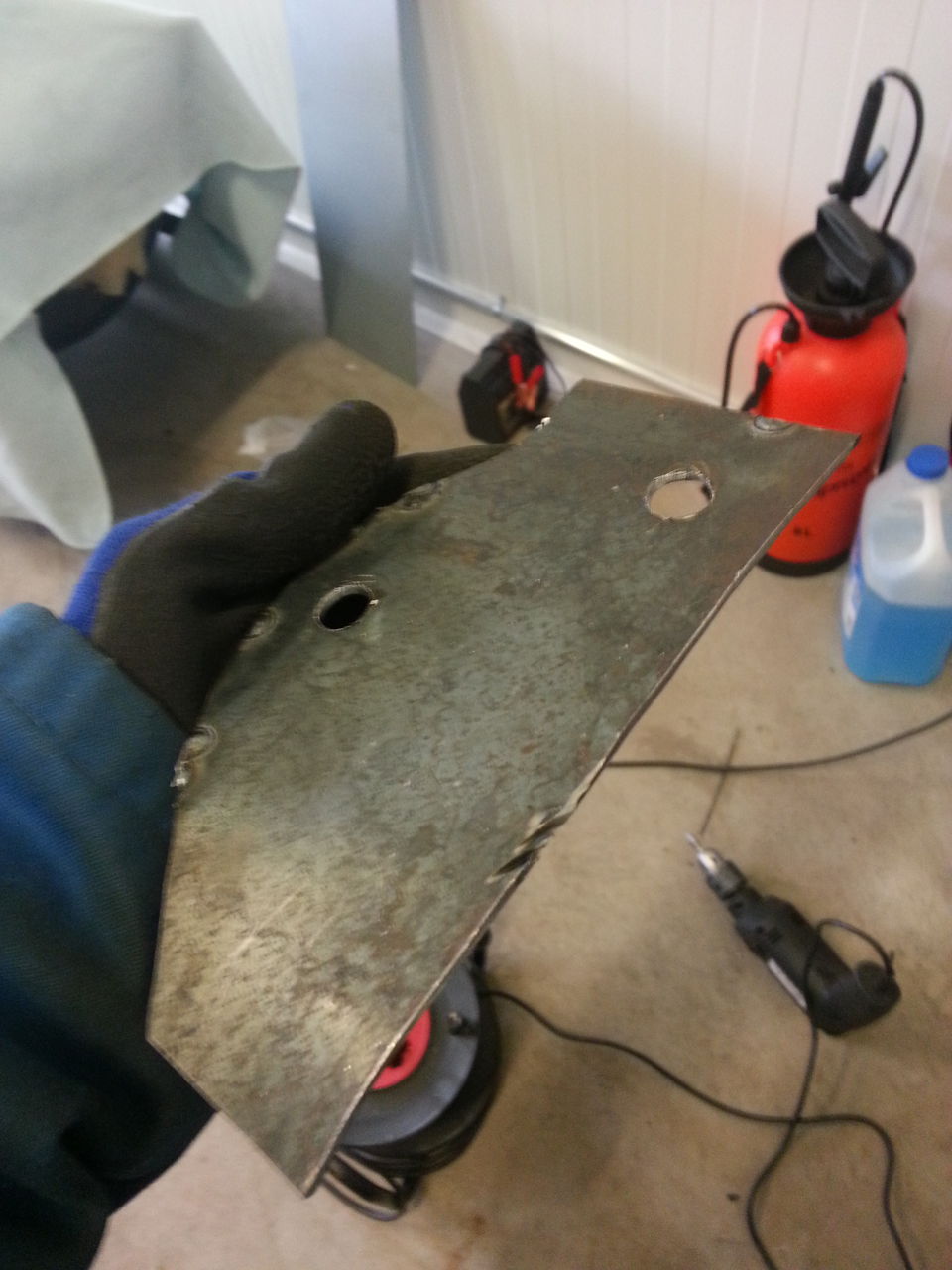 In the car. Painted and rust proofing dripping out of it. That shit was like mercury. 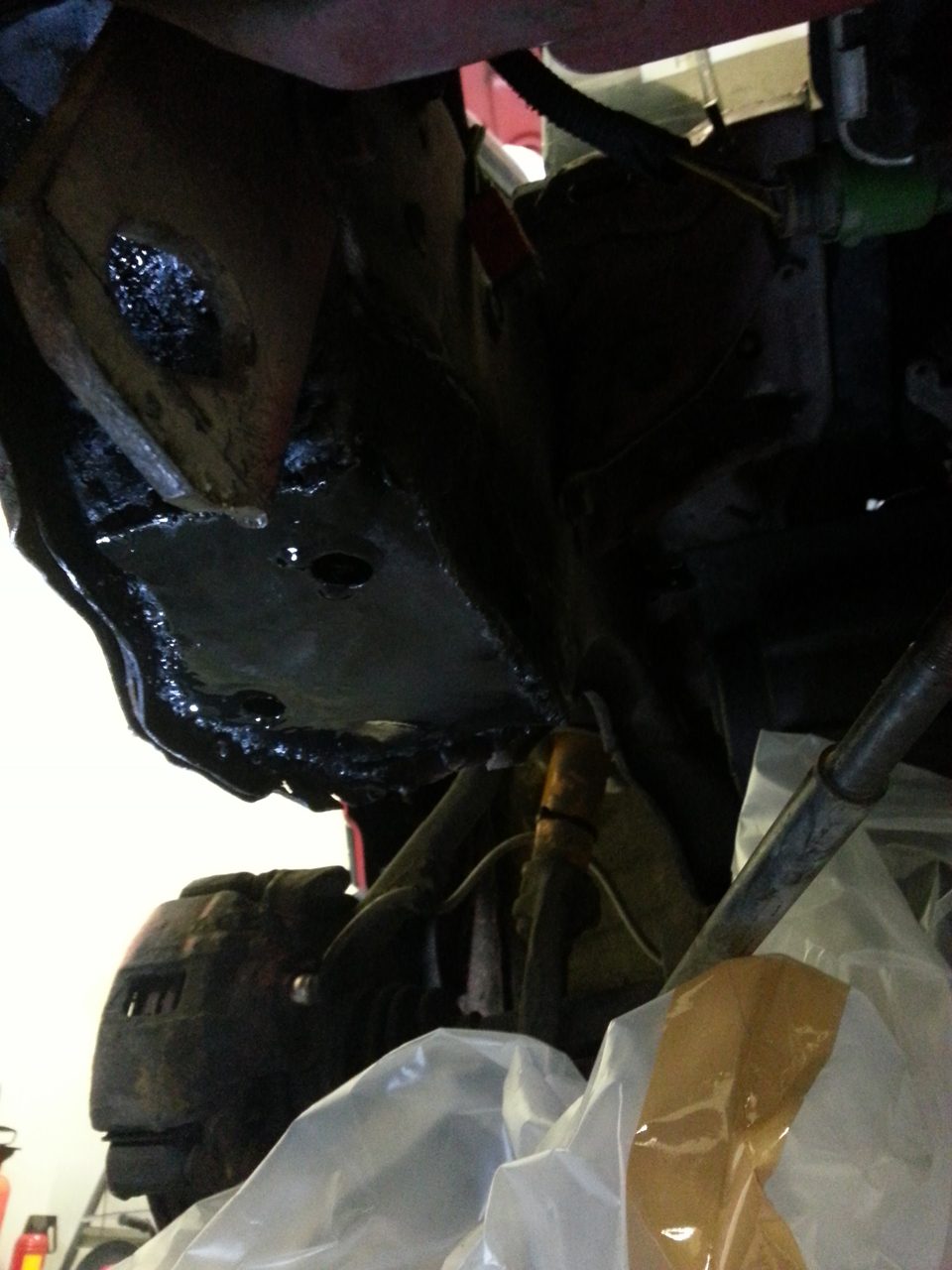 Now, if anything decides to rust through, it'll be the rest of the beam, leaving a pristine patch of beefy metal!

What are you using for rustproofing?

jibduh said:
Now, if anything decides to rust through, it'll be the rest of the beam, leaving a pristine patch of beefy metal!

What are you using for rustproofing?
Click to expand...

I was about to point out that the patch will probably be the last thing to survive.
I used a product made by Tectyl. Can't remember the exact name, but it was tectyl none the less.

I forgot to mention that 3 weeks ago they ripped the tarmac out from in front of the garage and re paved it with cement. And said that it should not be driven on for 3 weeks or so. So when I had time on my hands me and a friend of mine took the good 'ol grinder to the left opposite side chassis rail. And while it looked good I found a little rust there as well. So naturally I did something about it while we had everything out out the way. I made a patch, made the proper holes and started welding it in. Just that the nozzle on the welder said "no more" and I had to stop. Since it was 1am and I was out of .8 nozzles we called it a night and headed out.


"action" shot my friend took while I was struggling to find a drill bit in the garage that was not complete garbage. 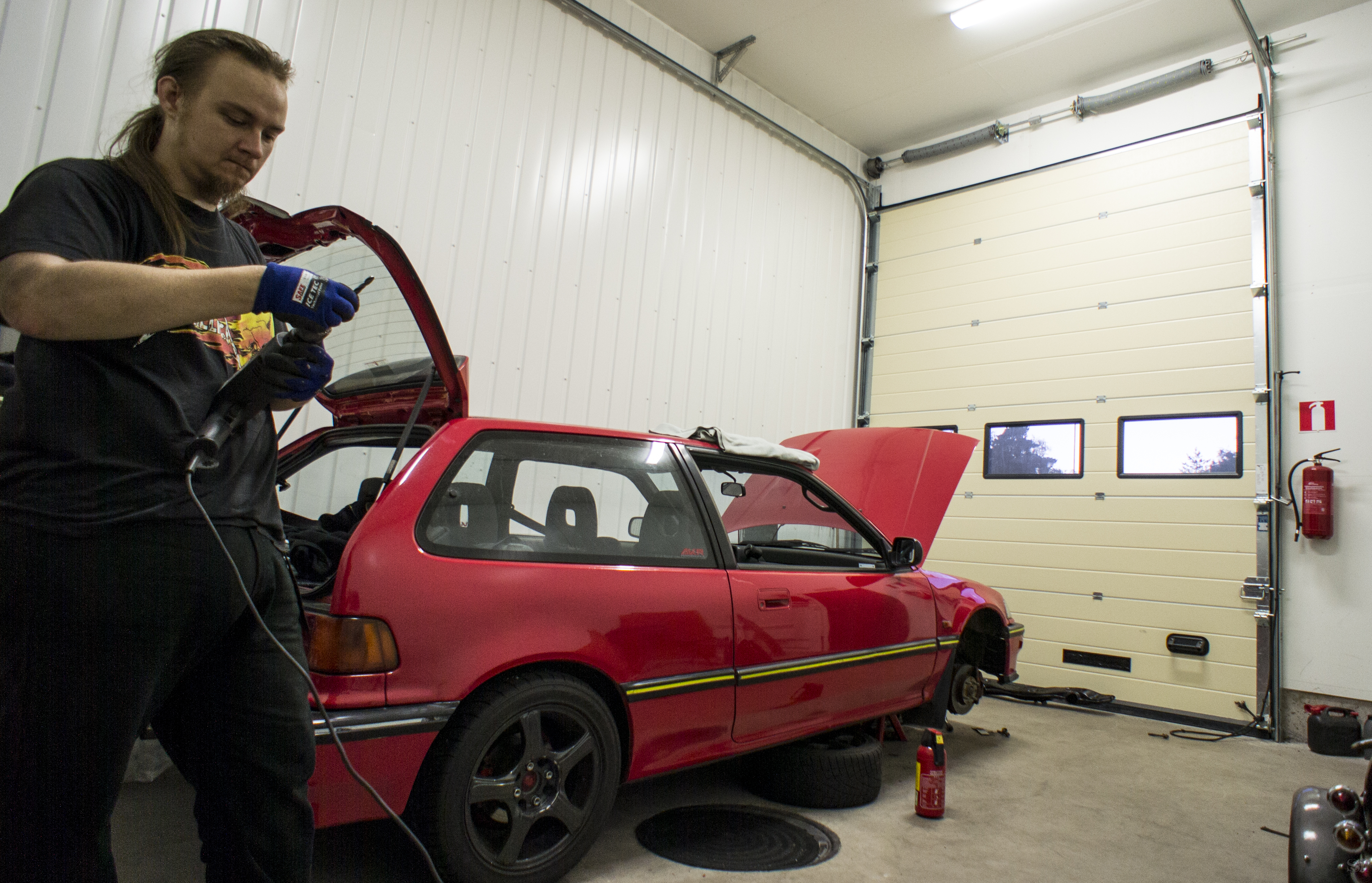 [e]You can also tell I'm about to get it inspected because the rear seats are in!
Last edited: Jul 11, 2014

Does everybody on your street have to park a ways from their garege in that case lest they be blocked in?

Also, that seems like a rather odd inspection requirement. Safety related?

jibduh said:
Does everybody on your street have to park a ways from their garege in that case lest they be blocked in?

This is a building with nothing but garages. They recently built the whole place, now they fixed the ground in front of the garage. No idea why they wanted us to keep off the pavement. The garage "complex" has a parking lot right next to the garage doors.

I missed this question. The car is still a 5-seater. Legaly I could just have the seatbelts back there and it would be legal. However, I don't need the attention in the inspection and the seats take less than 5 minutes to throw in. When I get a peoper set of fixed racing seats I will register it as a 2-seater.

Our welder broke nearly 3 weeks ago. I got it back on friday and yesterday withe the help of a friend we got the other side welded up. I put on some zinc spray and left it to dry. Next time I'll put on some black paint and put the thing back together.

Ah, that makes (some) sense. Presumably registration of a 2 seater (implied weight class, whether accurate or not) will be cheaper but insurance will be higher (2 seater being more sporty than 5)?

The insurance will stay the same. It's just a matter of the legal work involved and it costs more than a regular inspection. They want an extra charge for changing that little number in the paperwork. I get 70% off the price of the insurance anyway(years on the road with no accidents give out % every year). It's not that expensive. It's more about not needing to do it yet since the front seats are OEM "half buckets".

Paperwork example: The bastards want 13? every time I take it off road use, or when ever I take it back in to use. If you happen to loose the 2nd part of the paperwork it'll be an other 13? on top of that. Add the fact that in the same time I'll be taking the other car off/on it'll double the price again. The extra inspection or (modification inspection as it's directly translated) is 40? to 100? depending on what the change falls under. Wonderful business that.

Why not declare on/off road online? Only 4? that way.

I paid 20? to get Buick registered for 6 people, even though the original marking of 5 was the inspectors fault anyway... The list price for it was 60? but the dude said himself that it would be a legal robbery for just changing one number on the papers.

But I was wondering, why would you register it for two anyway? I see no advantage on that.

luokyio said:
Why not declare on/off road online? Only 4? that way.

I paid 20? to get Buick registered for 6 people, even though the original marking of 5 was the inspectors fault anyway... The list price for it was 60? but the dude said himself that it would be a legal robbery for just changing one number on the papers.

But I was wondering, why would you register it for two anyway? I see no advantage on that.
Click to expand...

I have to look in to the online part at some point. I heard it was cheaper, but that's a good deal cheaper. If you have fixed back racing seats(something I plan to do at some point) they will give you grief for not getting it registered as a 2-seater. And you can legaly remove the rear seat belts(more weight off the car).

I finally got some help in putting the bulkhead back in the car. It's a 2-man job and all of my regular helpers have been busy or away from the city on vacation. My brother was kind enough to give me a hand. It's not back together and back on four wheels. I will try to get it inspected next week

Passed inspection!
This thing was road legal last time december 31st 2012! Got it past inspection with one minor fault.

A friend of mine took some pictures after I gave the car a good scrubbing. He tried some things and while he said they didn't turn out as he liked, I think he still did a good job. 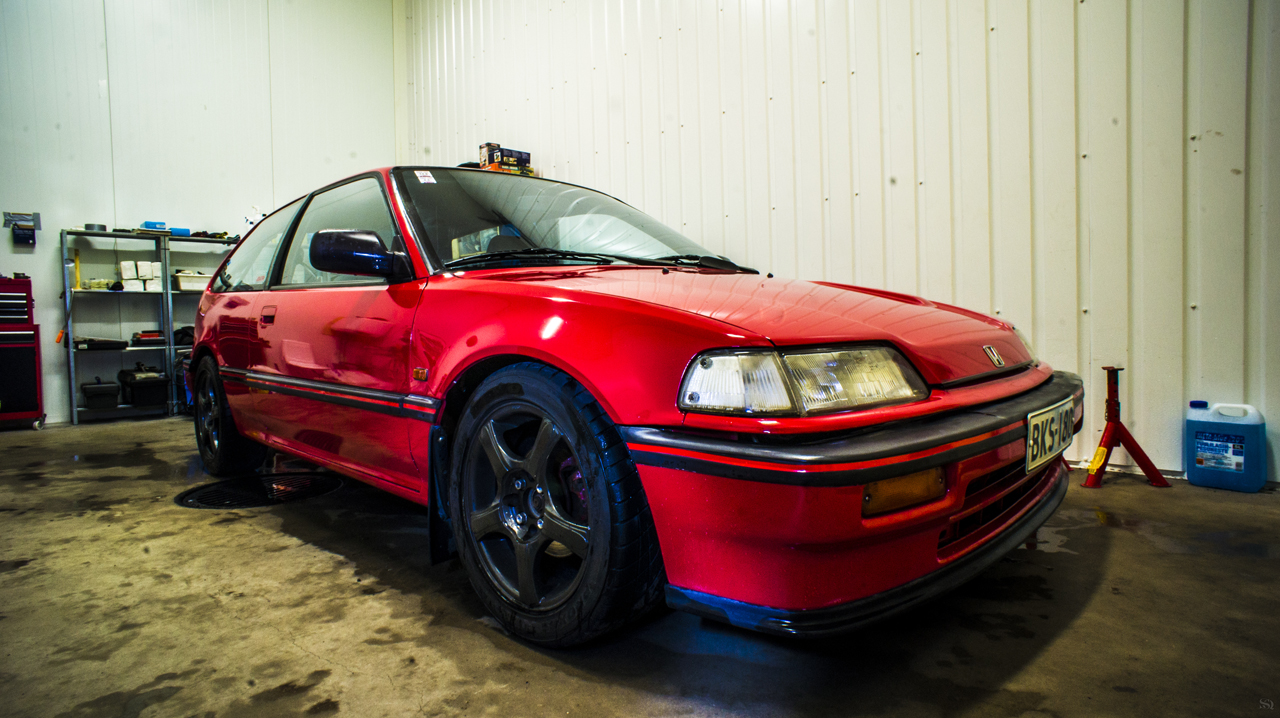 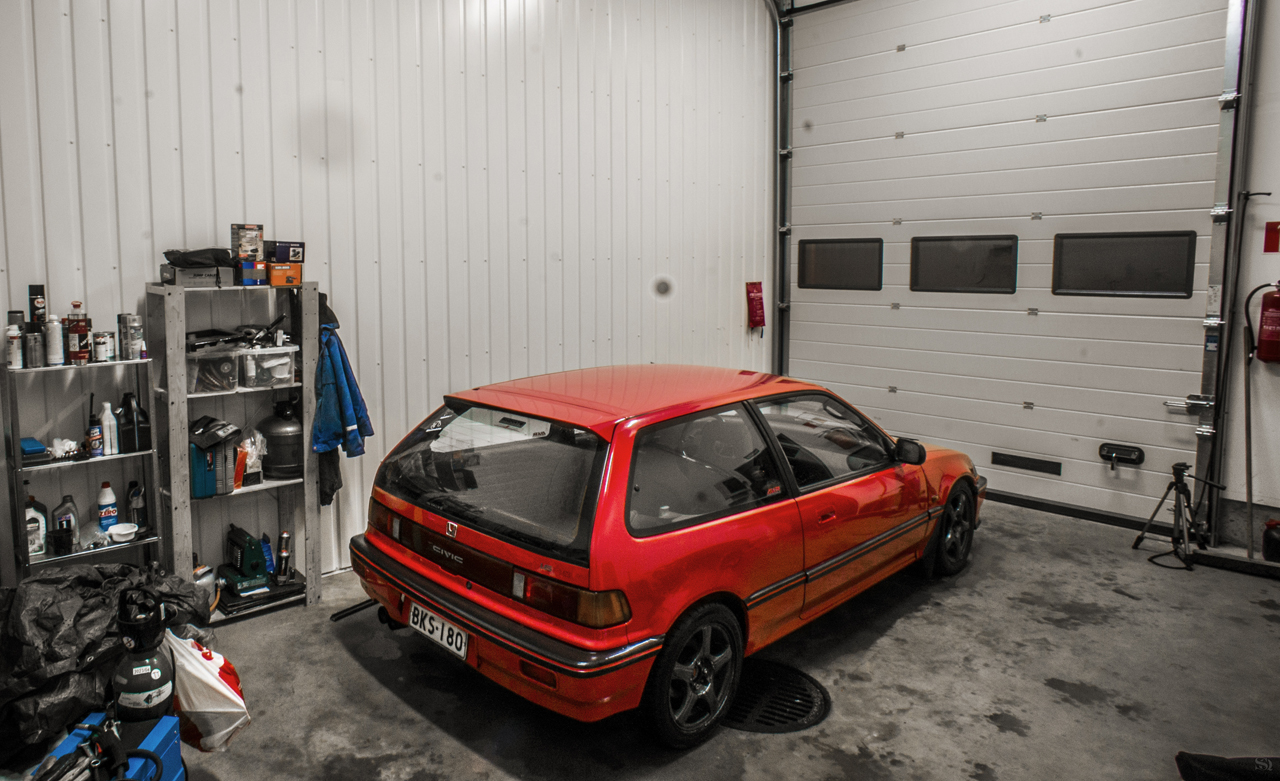 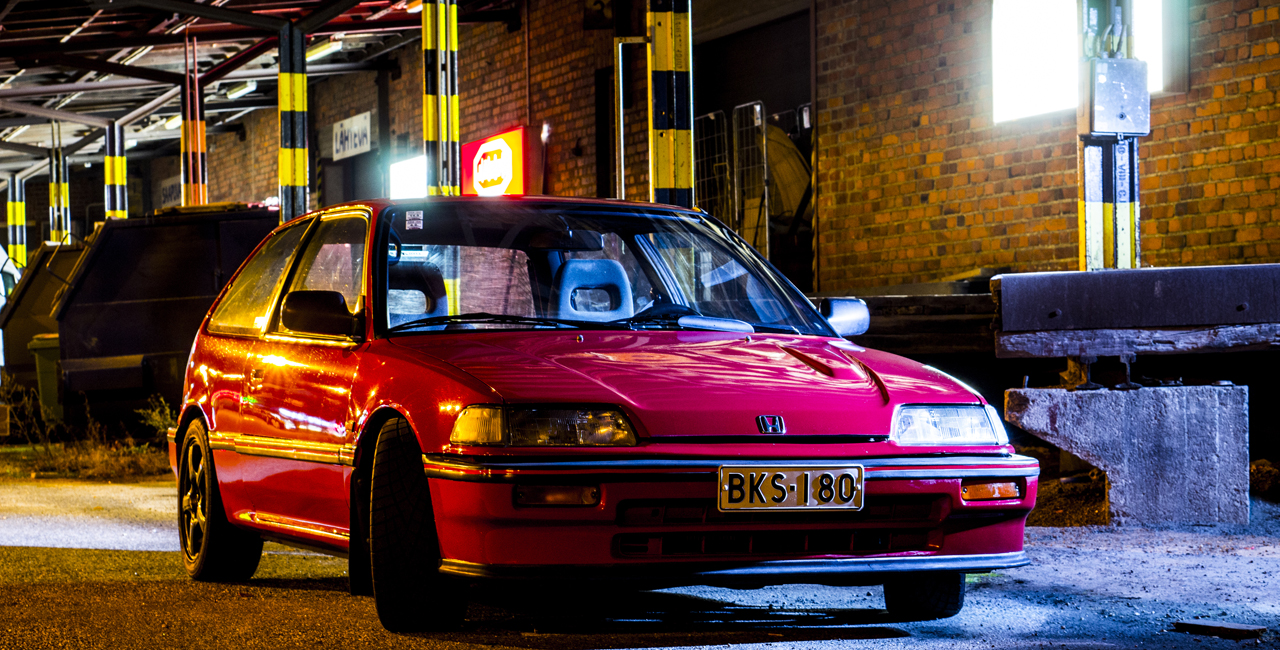 I want a ride in that next time I'm in Turku!

Just let me know when.

While yesterday at ahvenisto went well for the most part, I did find some new things I need to get sorted. First off the suspension now works as it should. This leads to a problem that I rly need a better seat. On my regular track it wasn't that bad but on a track like ahvenisto I was struggling to keep my self in place.

Also, I managed to overheat my oil. As a result I need to change it(ofc) and readjust my valves. These dohc D--series are sort of sensitive, they go out of adjustment easily. I think I need to add a gauge or two to keep an eye on things.
You must log in or register to reply here.
Share:
Facebook Twitter Reddit WhatsApp Email Link
Top