Much to my surprise, it passed inspection!
A coupled of things the inspector pointed out(but didn't fault me on) was that my front discs were 1mm under the limit(14mm instead of 15mm) and that before my next inspection I would need to replace the drivers side upper ball joint. Both simple and cheap to fix. On the hatch I've cracked cheap discs on the track but on this one I know the cheap discs and pads will work just fine. 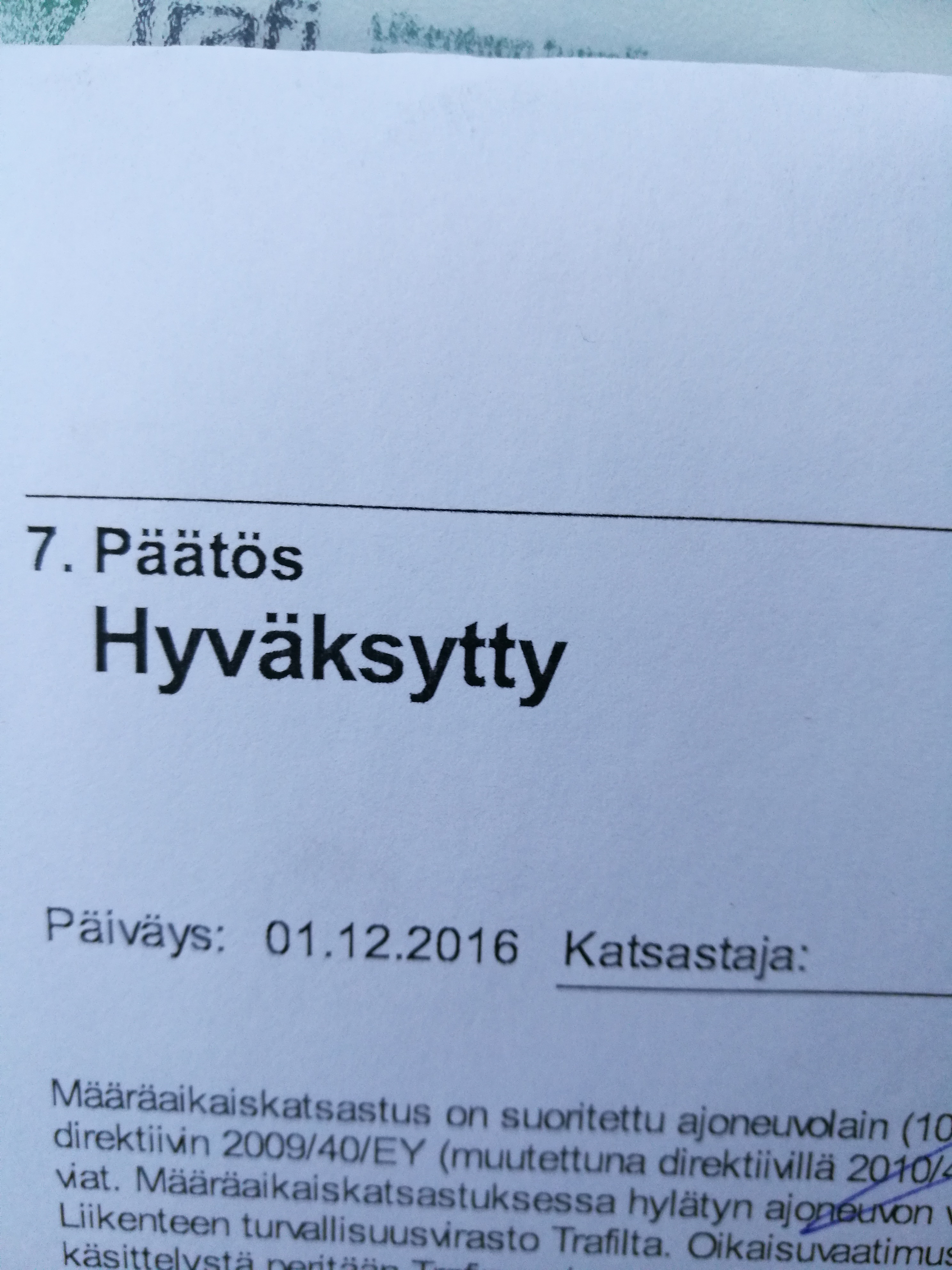 Now winter can come. Just in time for the winter tires being required by law(and common sense)

Not exactly todays information, but the hatch failed inspection on two issues.

The left side E-brake cable is stretched too much, the braking power is insufficient(over the limit by 3%) and an upper right ball joint. The latter I can fix easy and it'll take about thirty minutes or so. The cable though is hard to change as it's in a PITA location and you can't see anything much less get your hands in there. While that I can do, getting the cable has proven to take a bit more time than I thought. Every place has cables for the lesser models with drums. These had 4x discs as stock, while the same cable is used in the more common sedans as my sedan, the cables are no longer common items in stock(surprise. )

Well at least we got running water in the garage now. Gave the old girl a much needed wash, polish and wax. After a proper wash some Mequiars ultimate for the roof and hood, then a good protective wax. 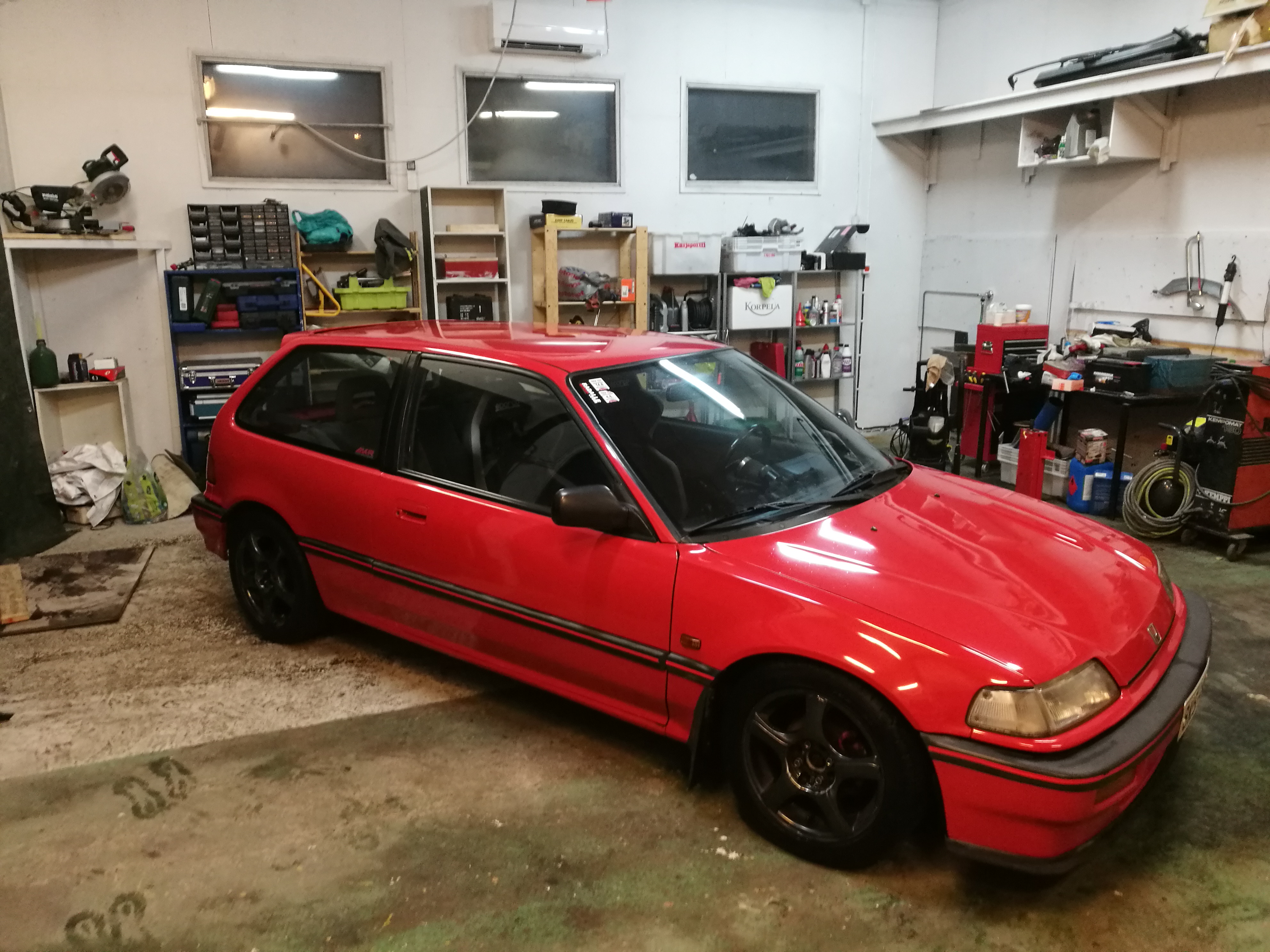 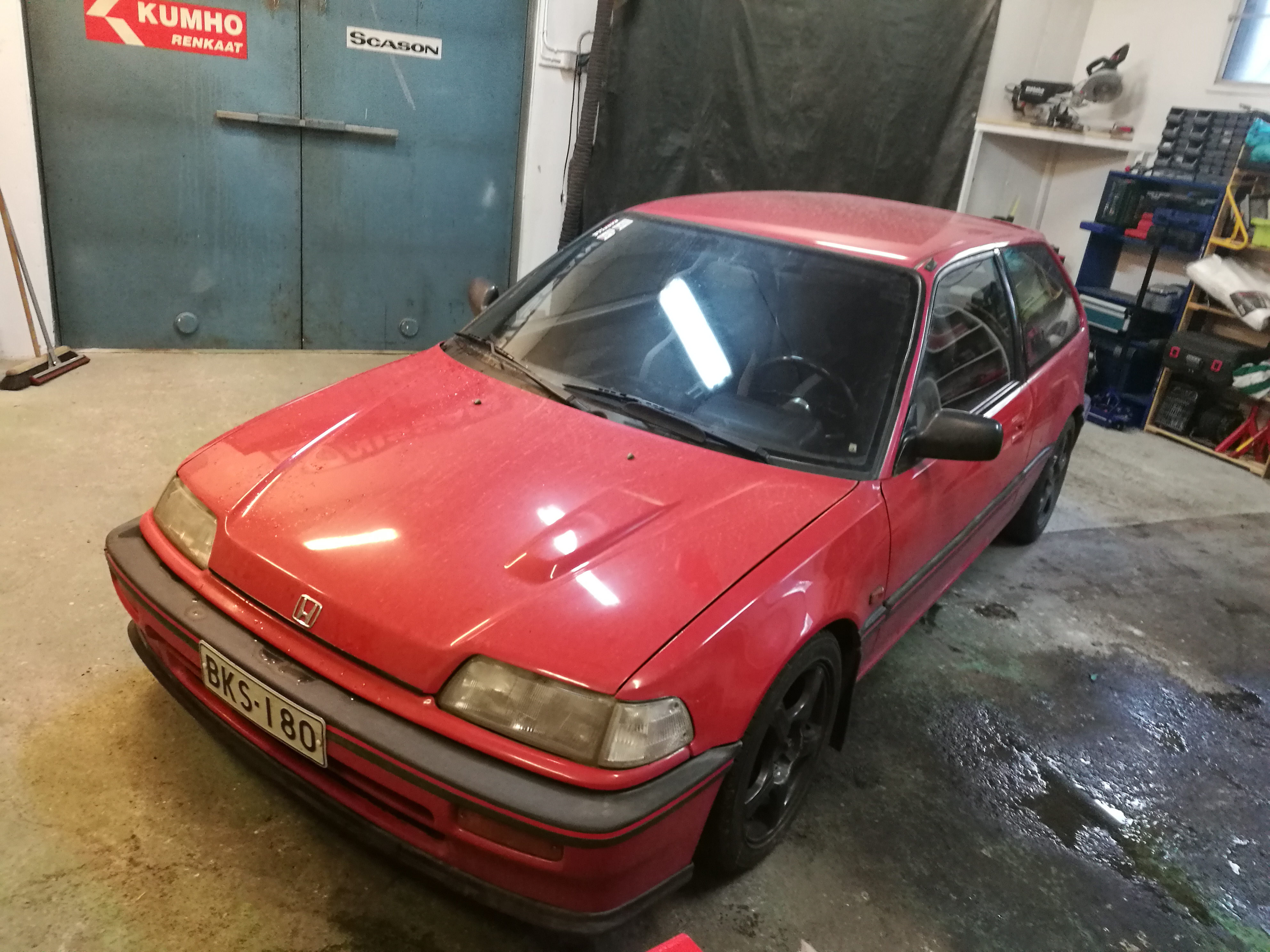 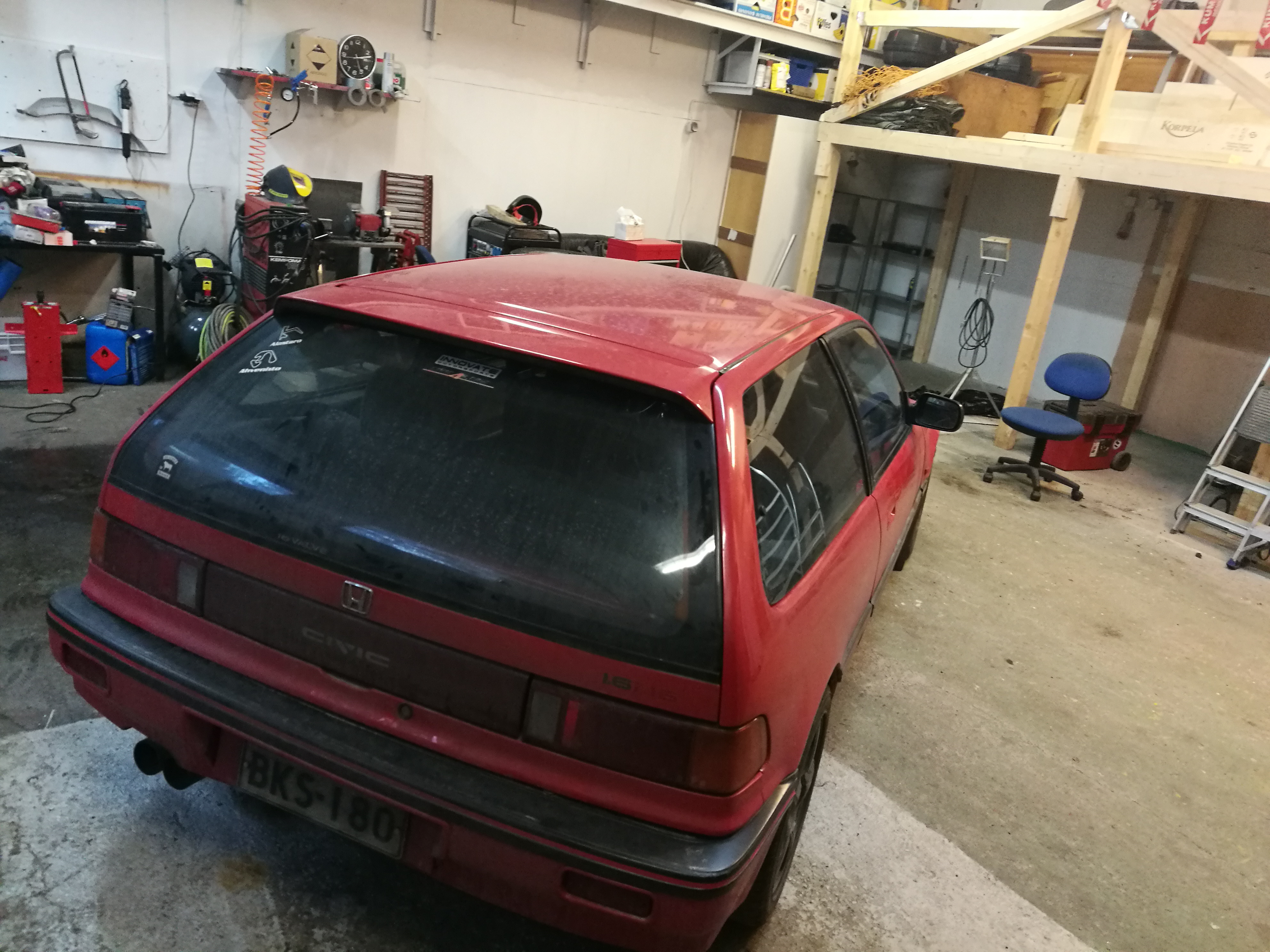 So facts are that this car sat unused and untouched for about two years until I had it inspected late last year. I had decided to put my time and effort in to someone else. Admittedly I should have done different. Getting back in it after a few years is like going back to 2006, I remember why I bought it and why I still have it.... and that I still had maintenance to do.

Before I could get it on the road last fall I had to do that e-brake cable and that upper ball joint. With these fixed I headed to the inspection station only for them to fail me on a single lower ball joint! That 20€ part swapped it was legal again! Being late fall 2018 at the time I didn't get to enjoy the car much before snow fell and I had to store it away again!

I had to drive it to the garage in the snow since it looked like the crap was down to stay. Not fun with semi-slicks I can tell you. 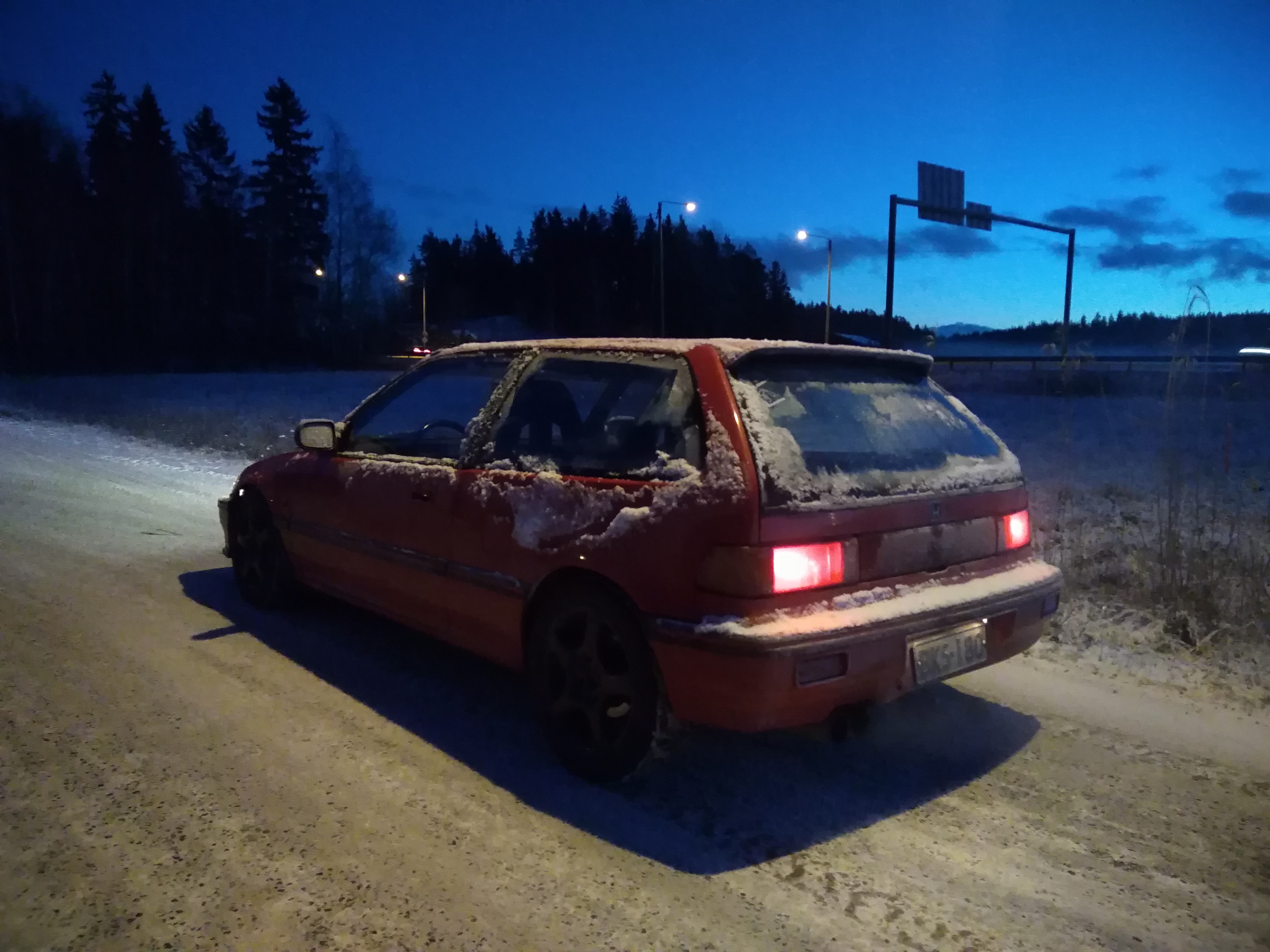 When spring arrived the car was legal - but I had a very important thing to sort out and that was the timing belt. The old stock one was way too loose since the head had been decked 2mm and the tensioner was no longer up to the task of taking that much slack out of the belt. I also had to clean up the timing side after an oil filter explosion I had just before I put the car away for two years. The new belt was out of a Mitsubishi 4G64 engine. The belt was the same size with the exception of being one tooth shorter! Just what I needed! 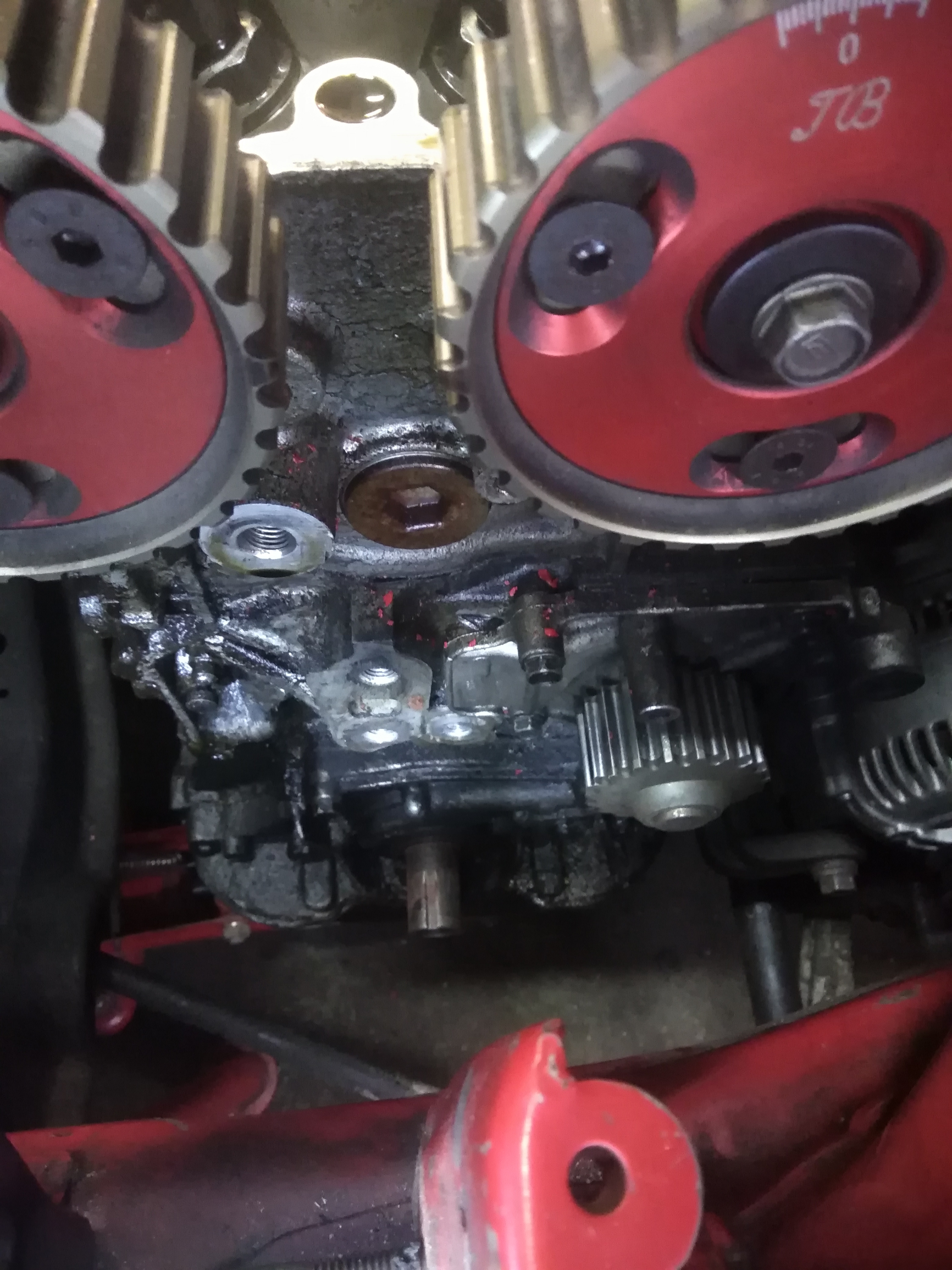 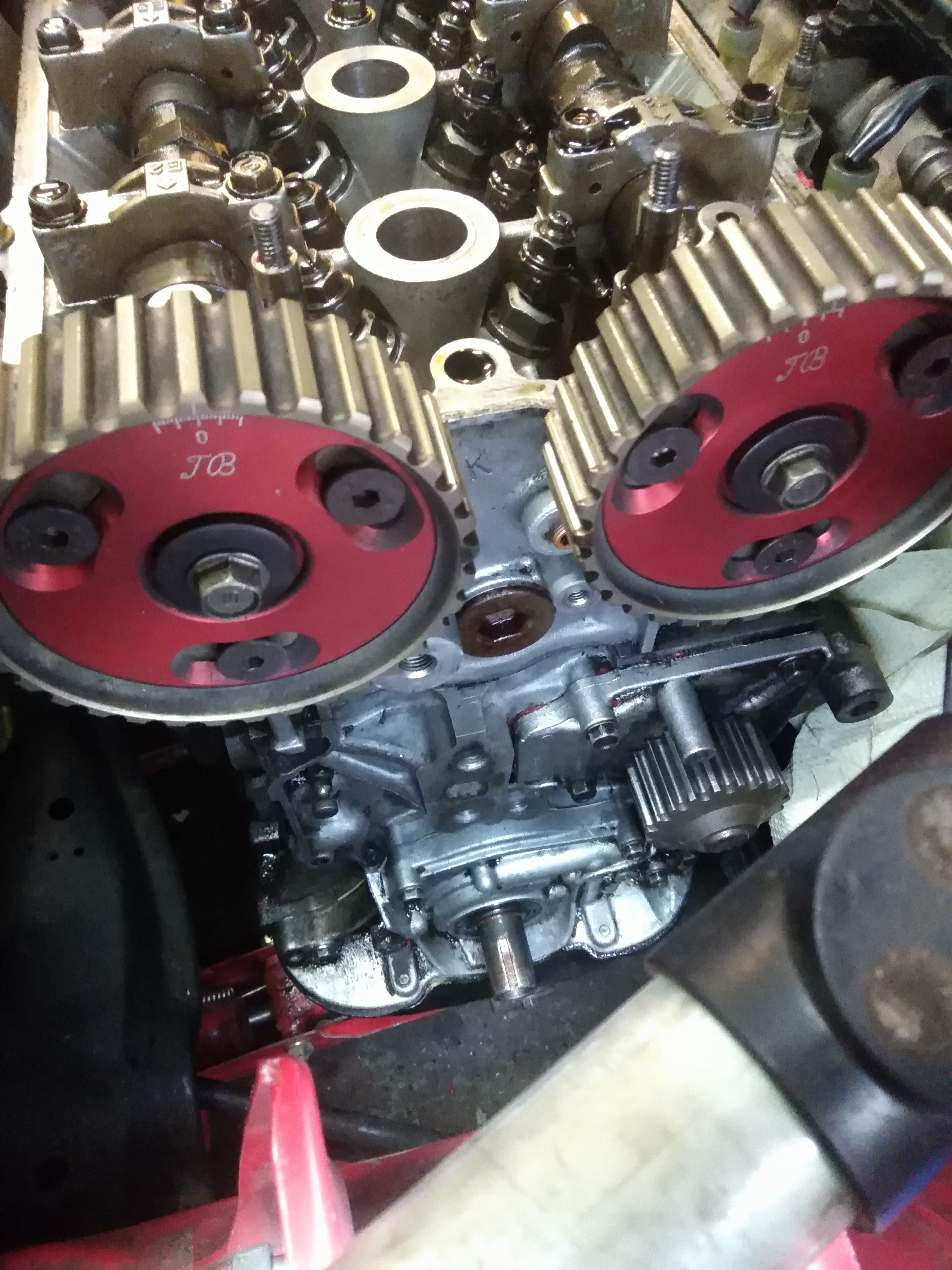 The once again faded red paint had to be polished up again. It's never going to be perfect but I can deal with it being faded. 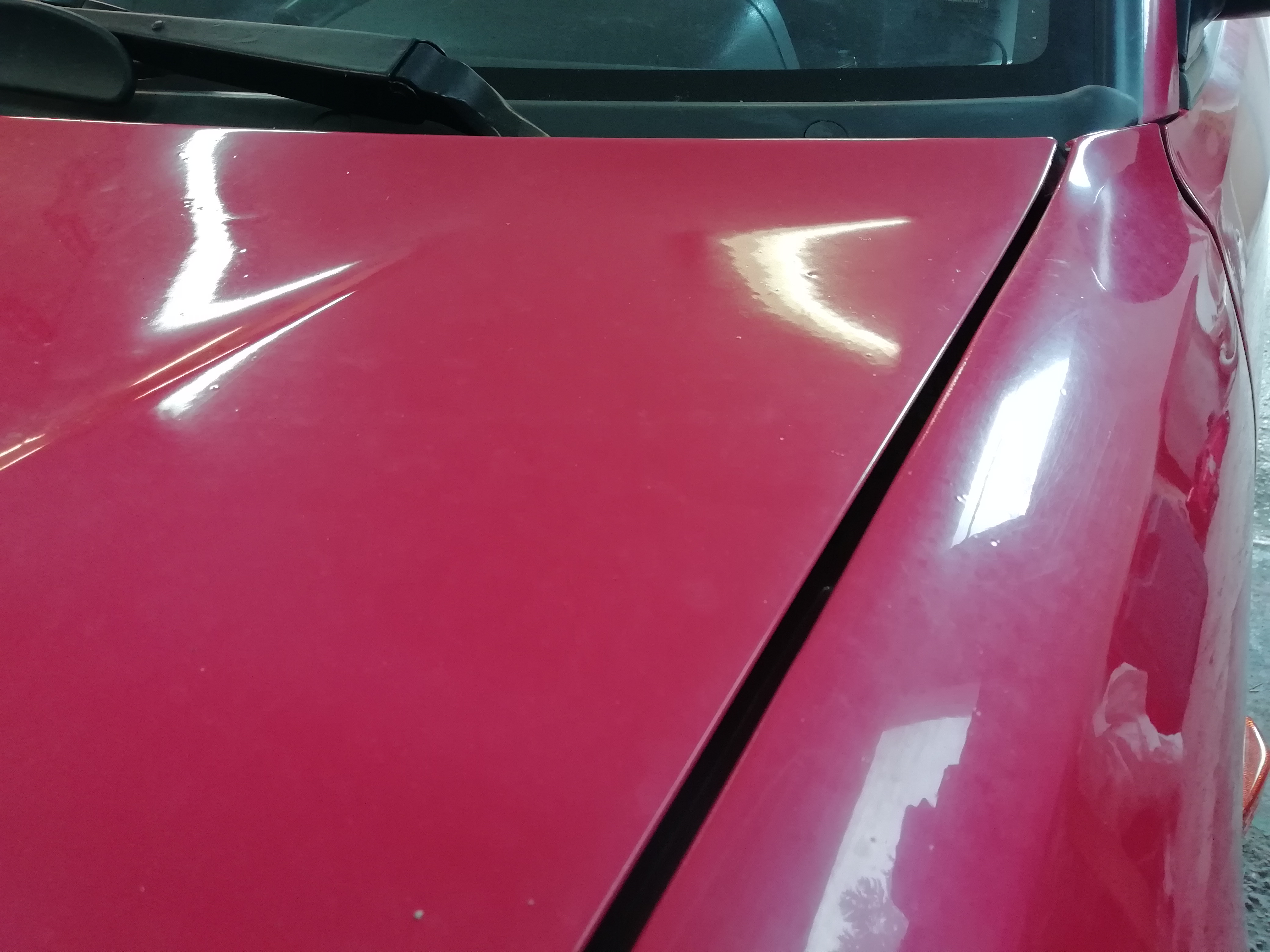 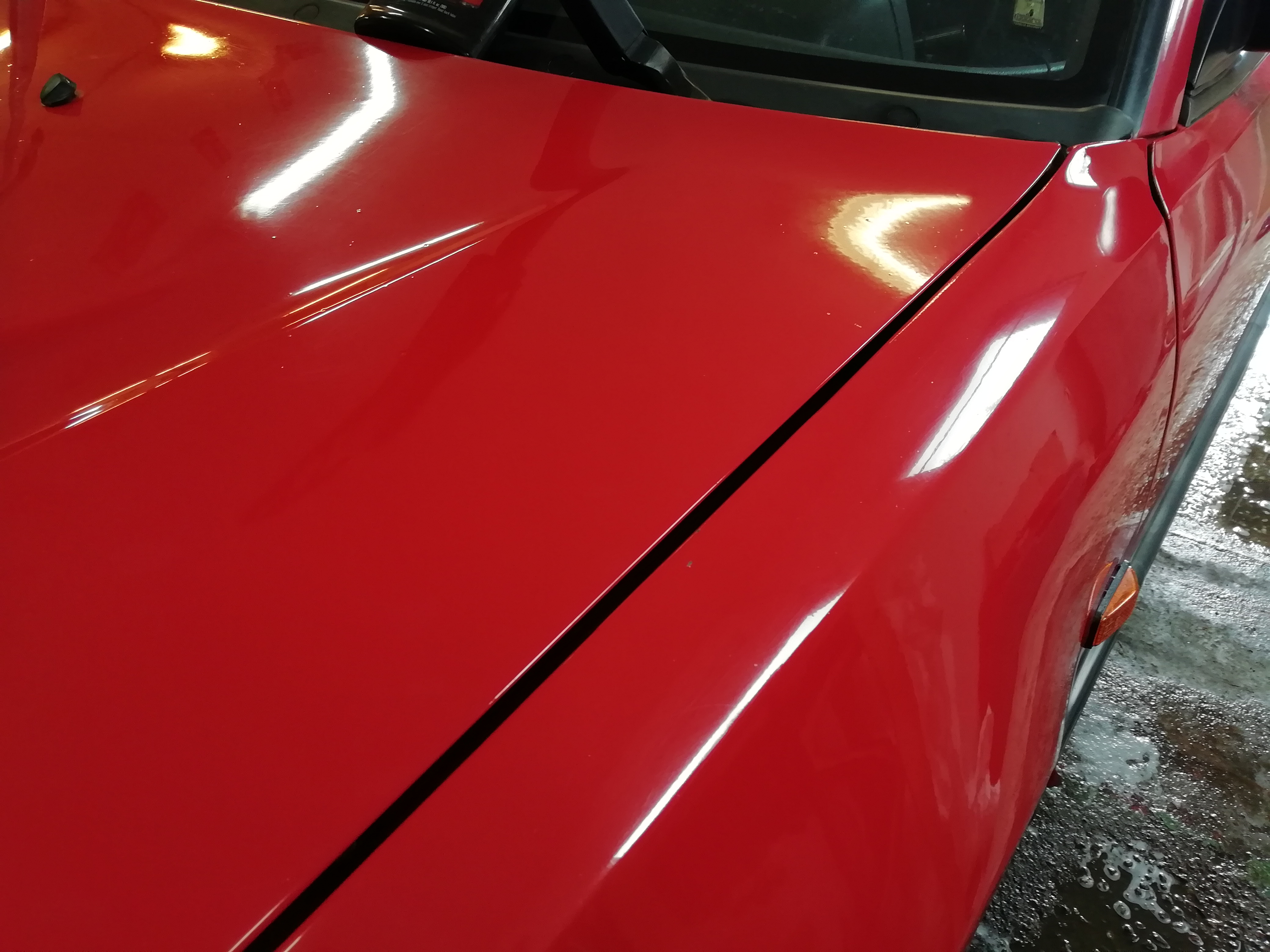 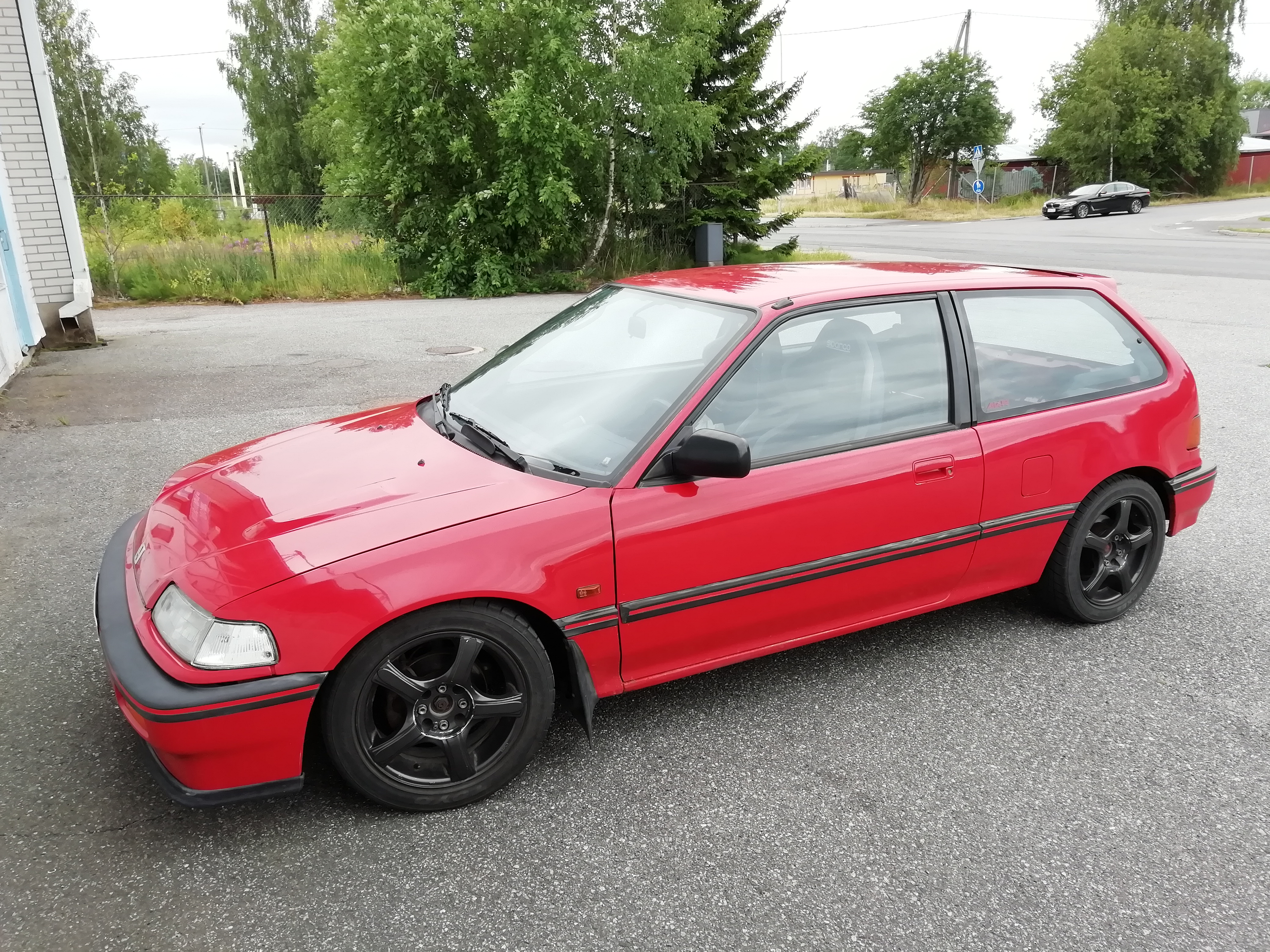 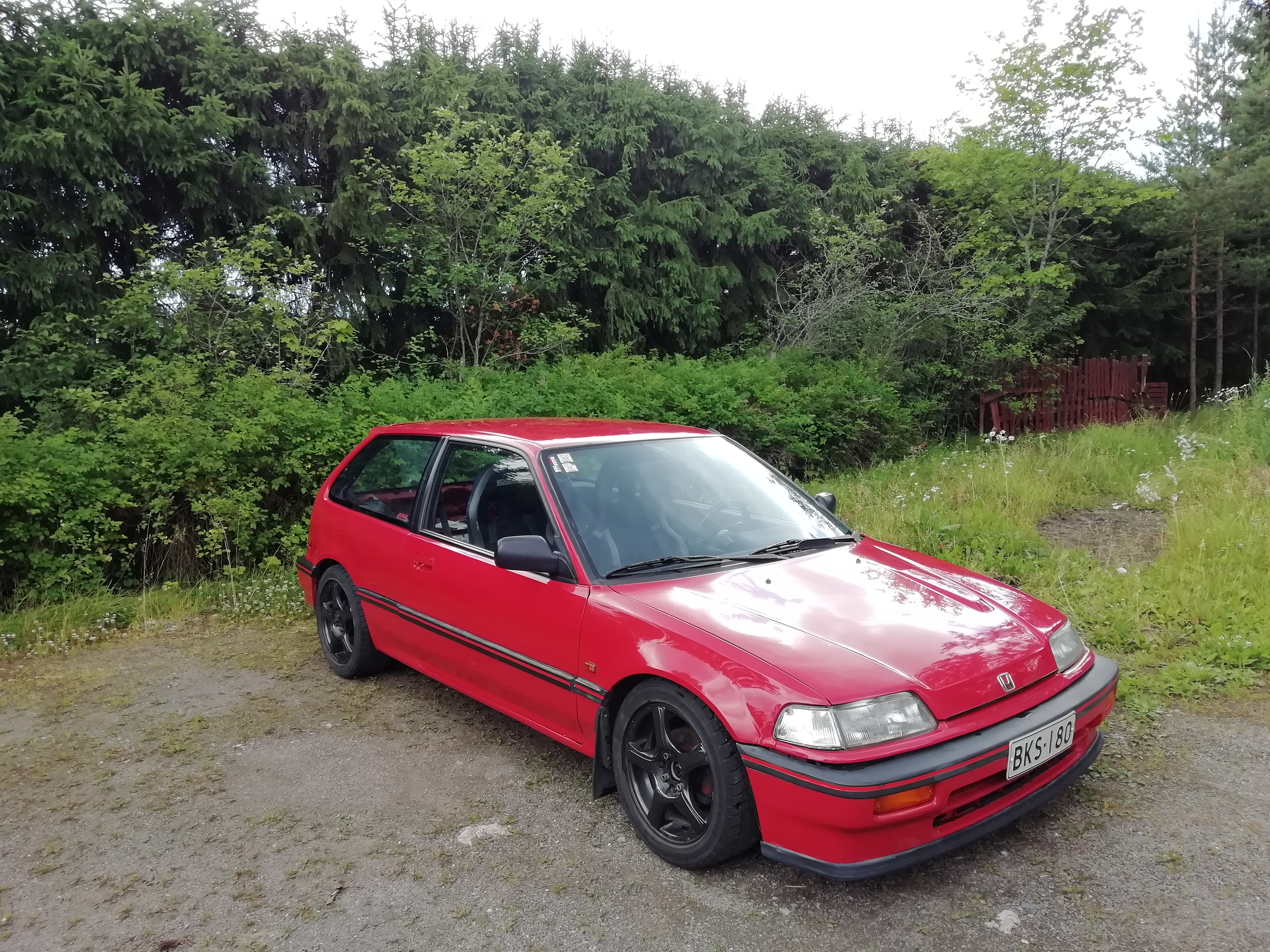 After that I took the car for it's first time out to a classic car event and it did the roadtrip flawlessly. To my delight they had reserved parking for cars older than 30 years. I was shown a spot on the front parking lot and did't have to park half way across the city! Only problem on that whole trip was that my ass was no longer that used to the sparco seats so it took some time for my ass to get calibrated to sitting in them for longer periods. 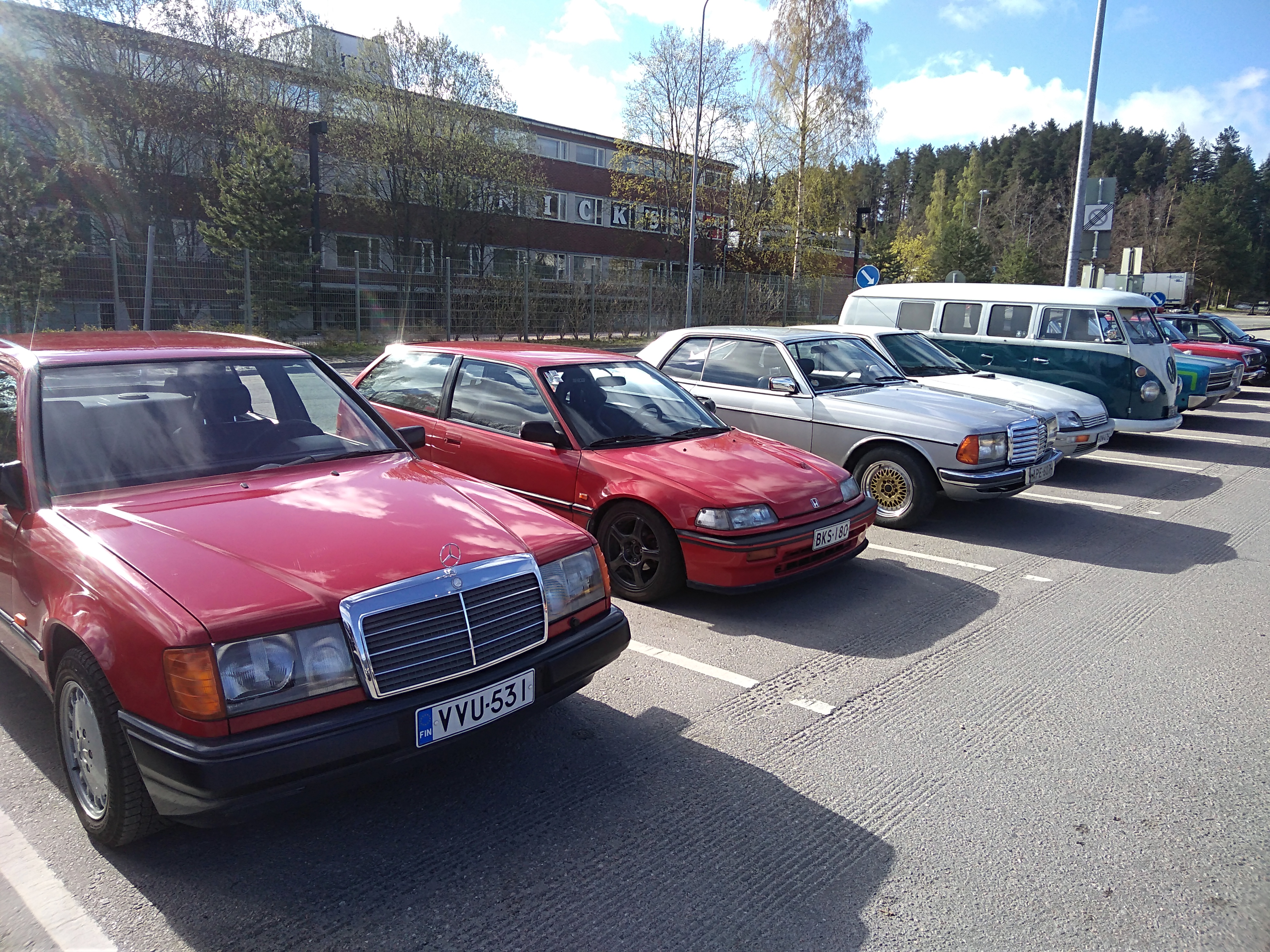 Whoa
Impressed by how much difference the polishing did to the paint.

And it was all done by hand. We do have a machine for the job, but I prefer to do it by hand so I'll not burn through.

Seeing pink cars polished back to red is incredibly satisfying.

For sure. And it's not like it's all that much work. Some hours of work and it takes years off.

On my way home from Galanttis place and the ringmeet, a bearing started to make a slight grinding noise. Nothing too big but noticeable. Then on the following week on my commute it would start to become a bigger noise every day and eventually it was howling like the hound of Baskerville. And this is with only commuting (45km). These bearings are at least 16 years old and have been through thousands of laps.

The car sat for a while since I was mostly away from home and on the bike. I diagnosed the problem and new parts should arrive tomorrow.
Ideally, I would have gotten a whole new control arm, but they're not available so a bearing kit will have to suffice. I also don't have a press of any kind so the actual pressing in has to be outsourced. Thankfully in my line of work I know all of them so I have someone taking care of that already - once I take the suspension arm and the bearing to them tomorrow. 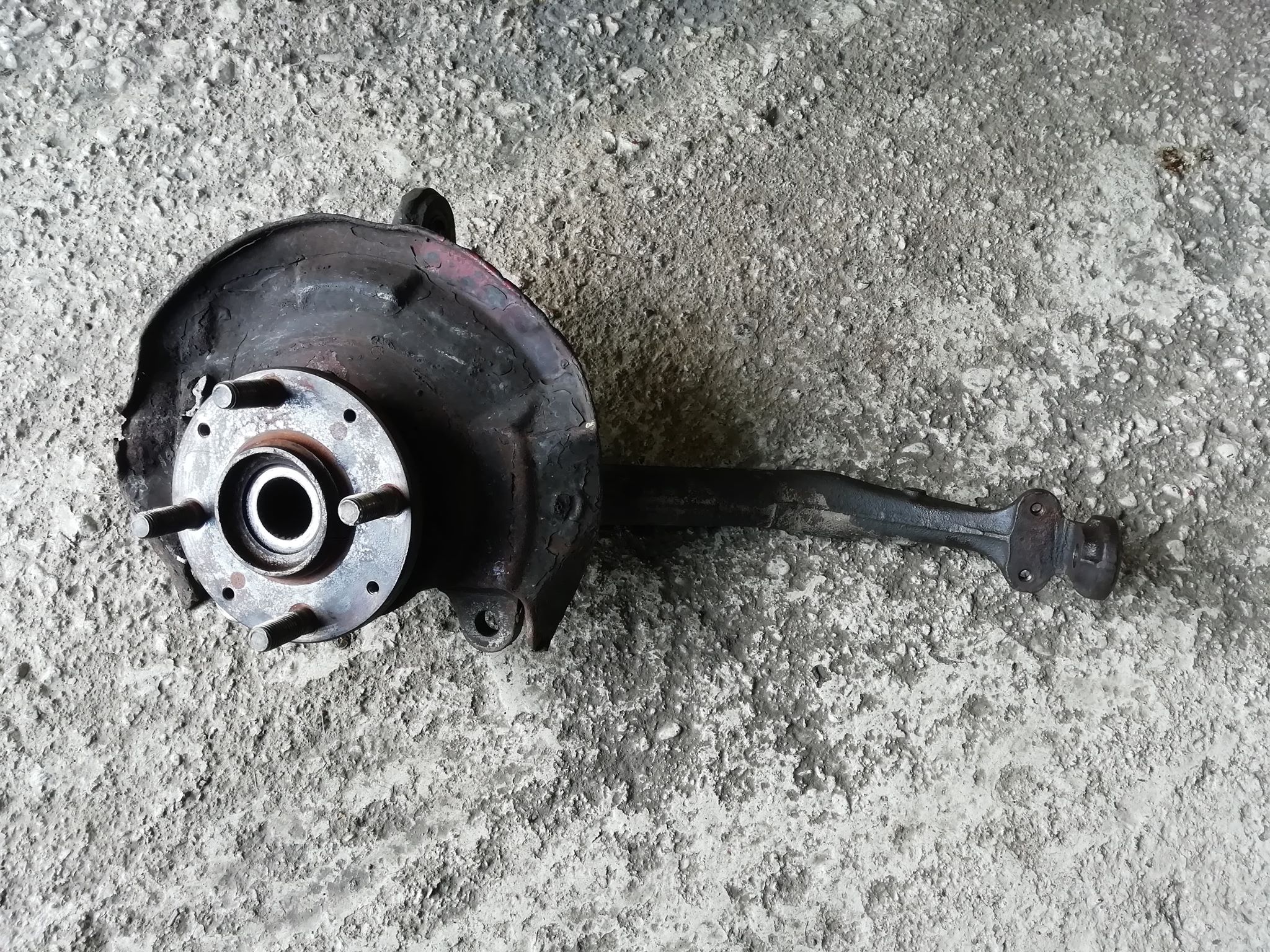 The noise. Oh that's so done.

New bearing showed up this morning, along with some much needed seals for the winter beater. I promptly took the hub and bearing to a friend who pressed it in during the day. Picked it up after work and then put it back together.

No more noise, all is quiet! ...well as quiet as a car with no insulation or carpets can be.
I did notice a failed exhaust hanger. The exhaust now moves a bit too much and touches the car in tight cornering. I'll need to replace that asap.

So I had the car inspected last week(MOT for you UK ppl) and it failed. One fault was found on the whole car, lower ball joint. On the hub I just had off. I probably broke it taking it off.

A few tips were given to me on what I should keep an eye on, but only that one fault was found.

I once again realize this should have been a tread of it's own. Perhaps I'll one day split them.
So I've not rly even seen this rotbox since may. Mostly because I've been in the hatch and my brother has been driving this heap. He called me the other week and told me it needed some seals for the valve cover. I knew about some of these being bad but just hadn't ordered them. The seals needed replacing was the valve cover seal, and the donuts around the spark plug holes. 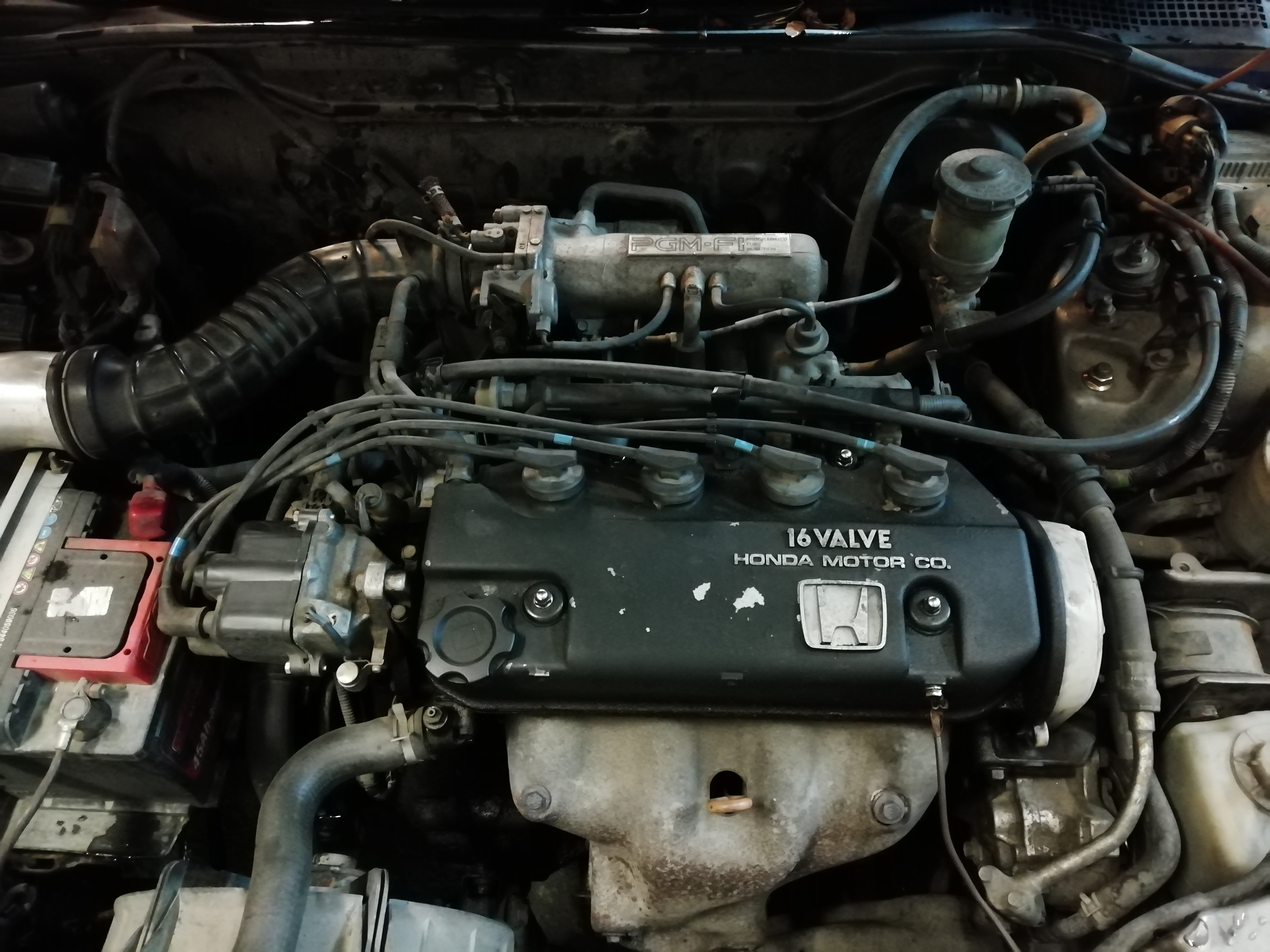 Valve cover off. It needs an oil change bad. It was last done in spring. 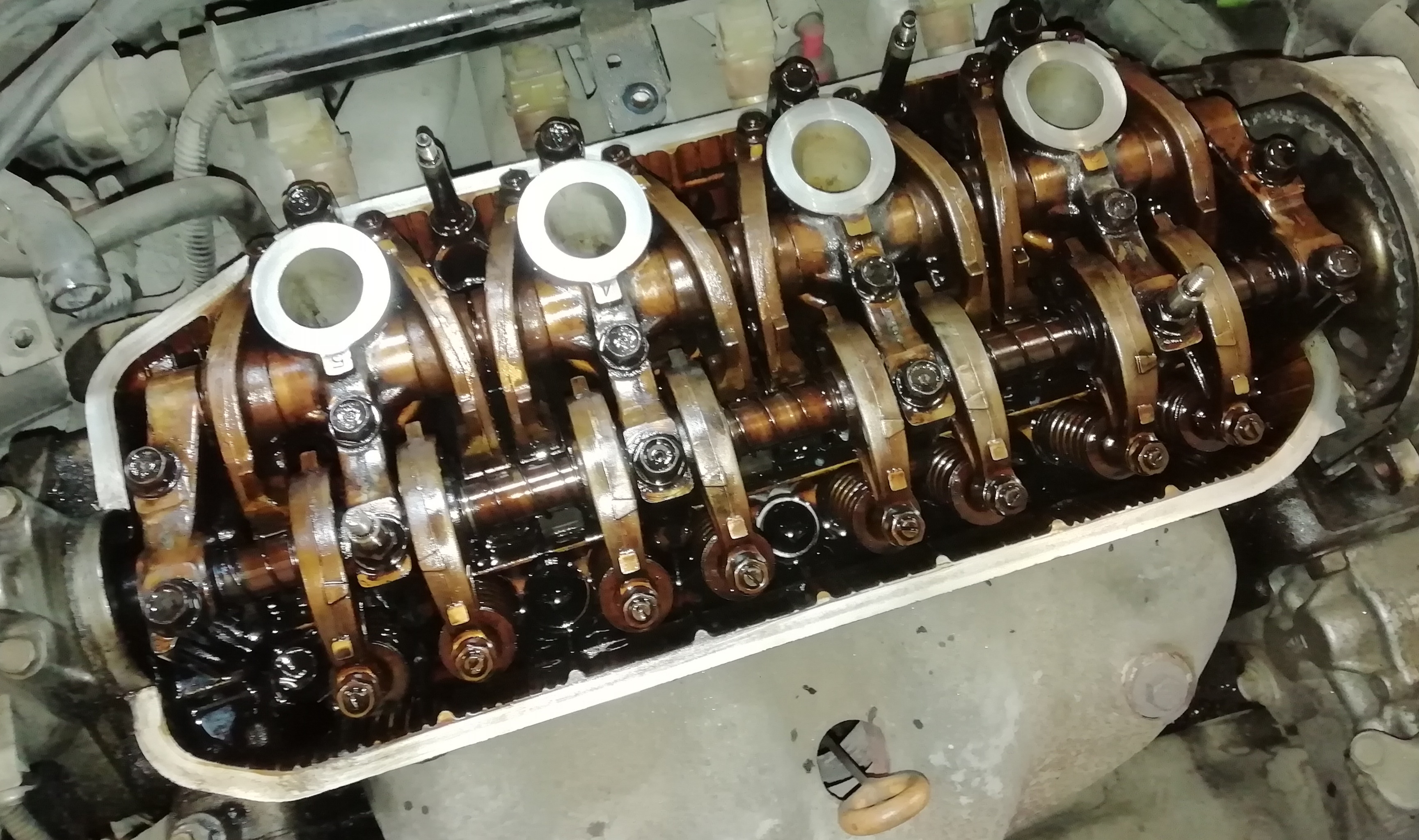 Mostly the fault was these seals. Clearly older than time itself since they had lost all elasticity. 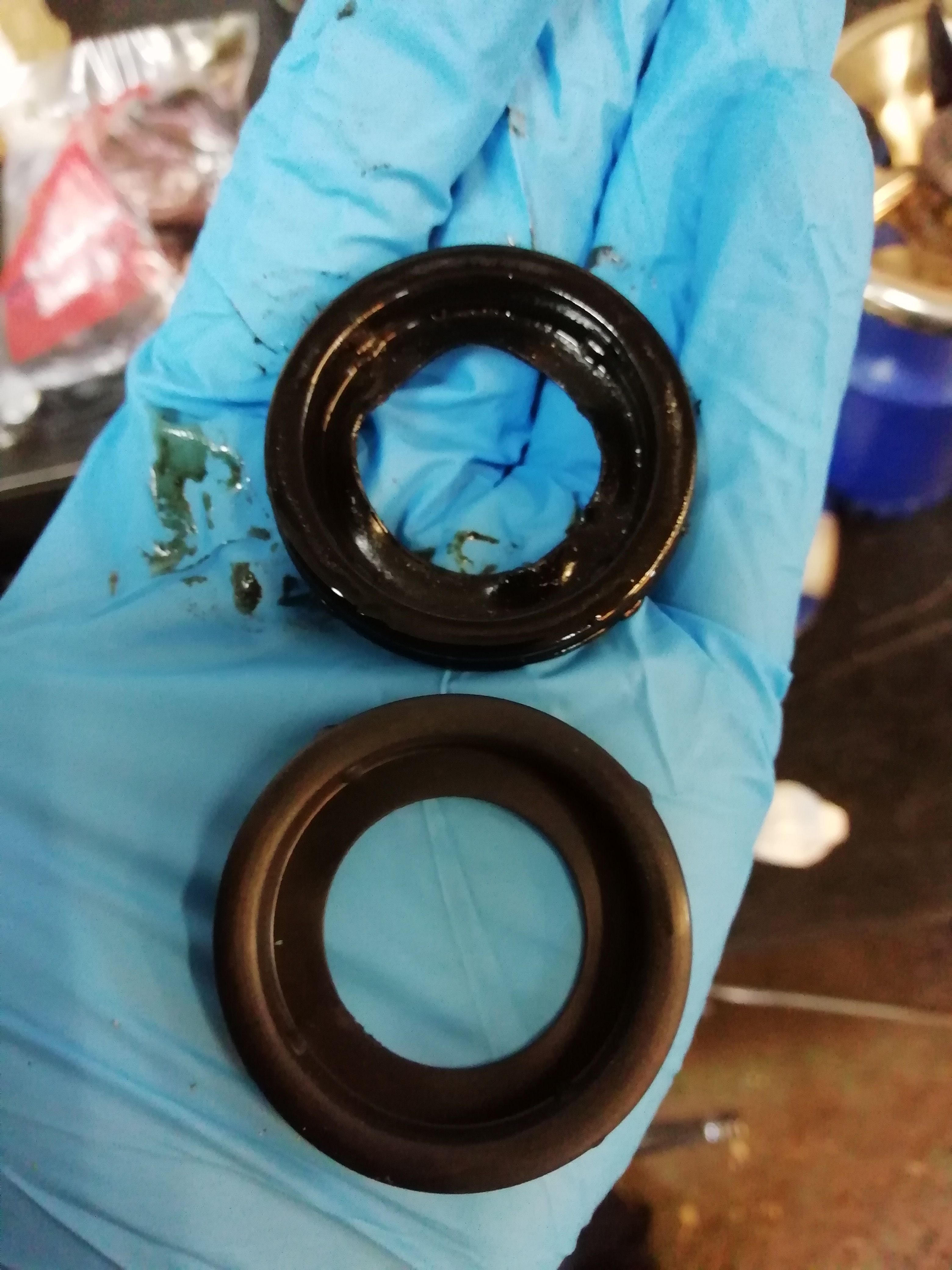 Then just because it could. On the way home the radiator failed. So I'll be taking one from work then it seems. 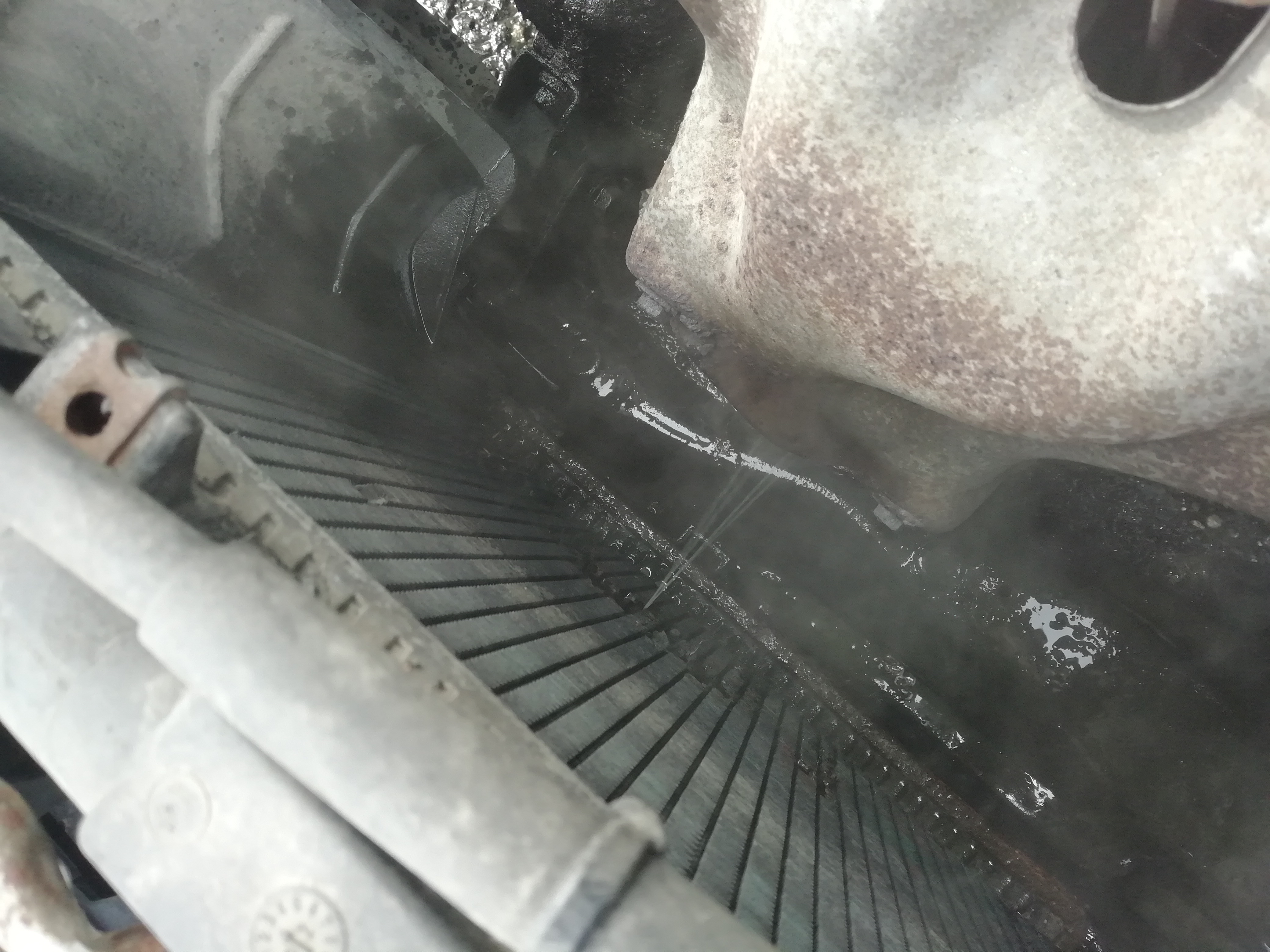 The joys of working with auto parts?

Redliner said:
The joys of working with auto parts?
Click to expand...

It does make life a little easier. I ordered 4 sets of the top end seals for the sohc engine and sold 3 stets off to friends before I even opened up the set for my sedan. Ofc. I am getting a good deal on the radiator as well.

Cheap temporary solution done to the radiator. So it's probably gonna last the rest of the lifetime of the car.

I don't expect the sedan to pass inspection late this year, and depending on the faults then cars story might end. Time will tell.

Hatch inspected and legal for an other year!
I also ordered a set of front strut rod bushings for the crossmember I had off a few years ago. One of them has gone bad and I'm changing all of them.

Anesthesia said:
I don't expect the sedan to pass inspection late this year, and depending on the faults then cars story might end. Time will tell.
Click to expand...

Much to my surprise... it did! Pictures taken, car up for sale. Some interesting trade offers have come my way - nothing actually worth it yet.

The "to do" list on the hatch for the winter is fairly straight forward. The bushings already mentioned need replacing. Brake discs and pads should get replaced and the brake fluid needs to be changed. The tires also need replacing. I also got some oem replica door decals these had on some japanese versions of the car. Always wanted a set. Now I found them. One of the very rare things I'll do purely for aesthetics.

The bushings are on the end of the parts circled. The only actually broken thing on the car at the moment. 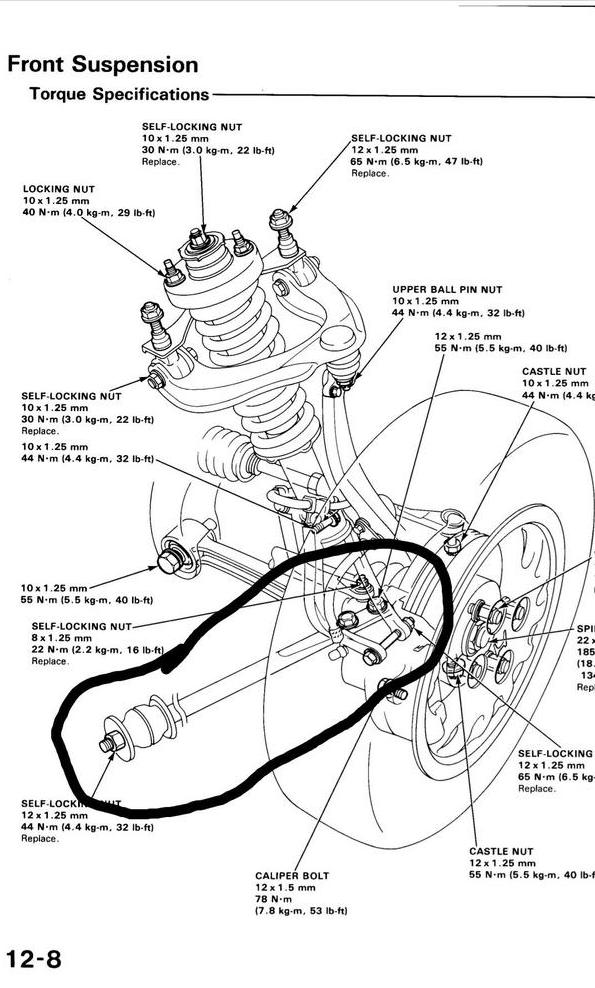 Awesome car! Polishing made a huge improvement on the paint.

bonoel said:
Awesome car! Polishing made a huge improvement on the paint.
Click to expand...

Thanks. It's always a work in progress. The paint could always be better but it's good enough for how old the car is(paint is not as old though).

Some things already done. I managed to "wheeler delaler" some spare rims I'll paint some other color and put tires on before spring. I also got my decals fort the doors I ordered ages ago but only showed up recently thanks to the postal strike we had going on over here.

A few more things I've remembered that I "have to" deal with before spring, but we'll cross that bridge when we get there and start actual work instead of putting some stickers. on.

I noticed I've got a spare trim piece to go under the lights that's not bent(there is a slight bend in the one on the car) that I might paint and put on as well. I also need to put an inner fender on the drivers side. As it is now it throws dirt and rocks in to the fender, engine bay and door opening(it's hollow). Some proper cleaning to be done in the wheel well, fender and door jam to get all the crud out.


The wheels. If I end up using these I'll paint them up some other color. Near, if not the stereotypical "aftermarket alloy wheel" of the 00's 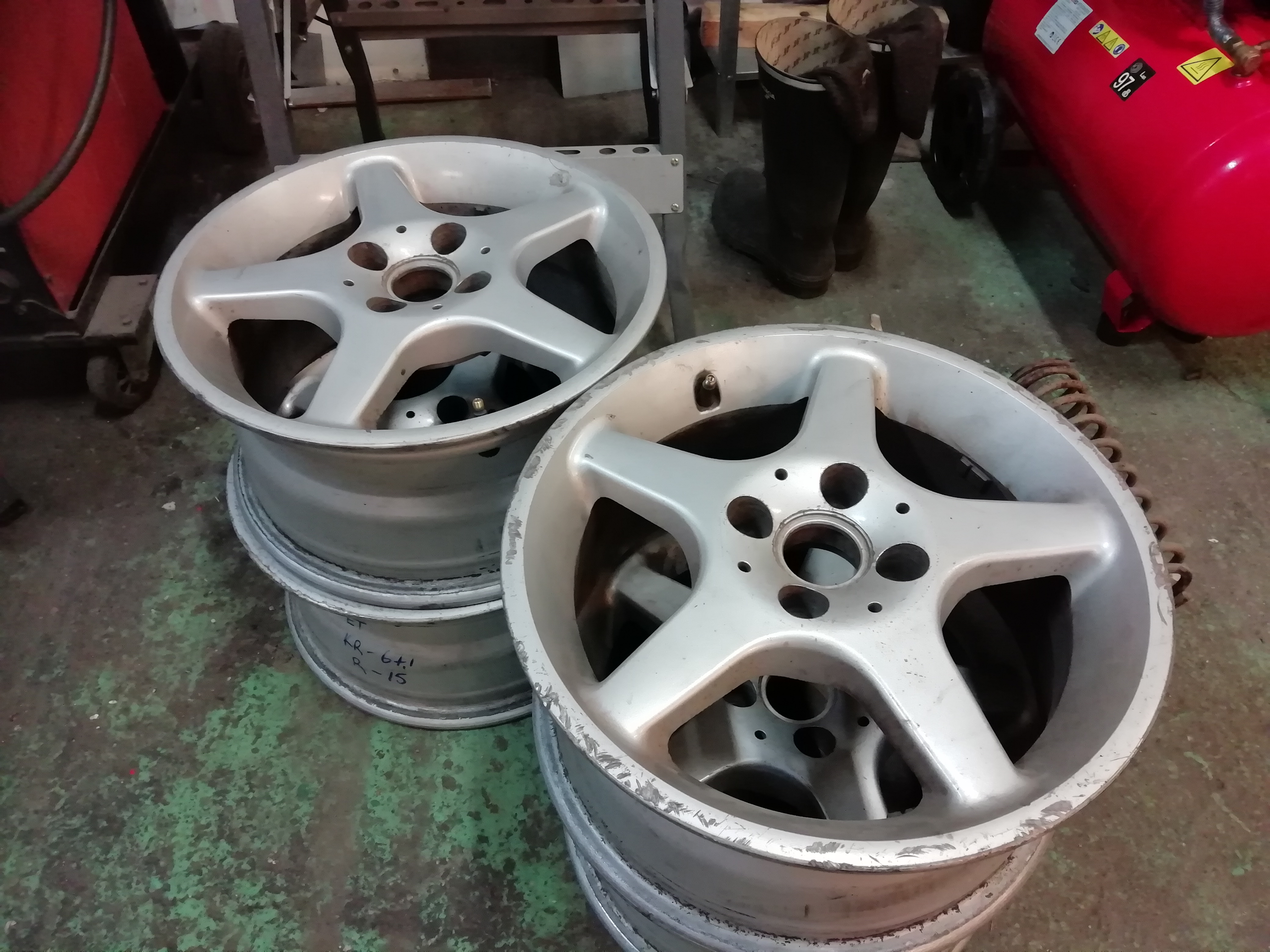 The decals. Probably not to everyones liking, but IMO the european models should have had this from the factory. 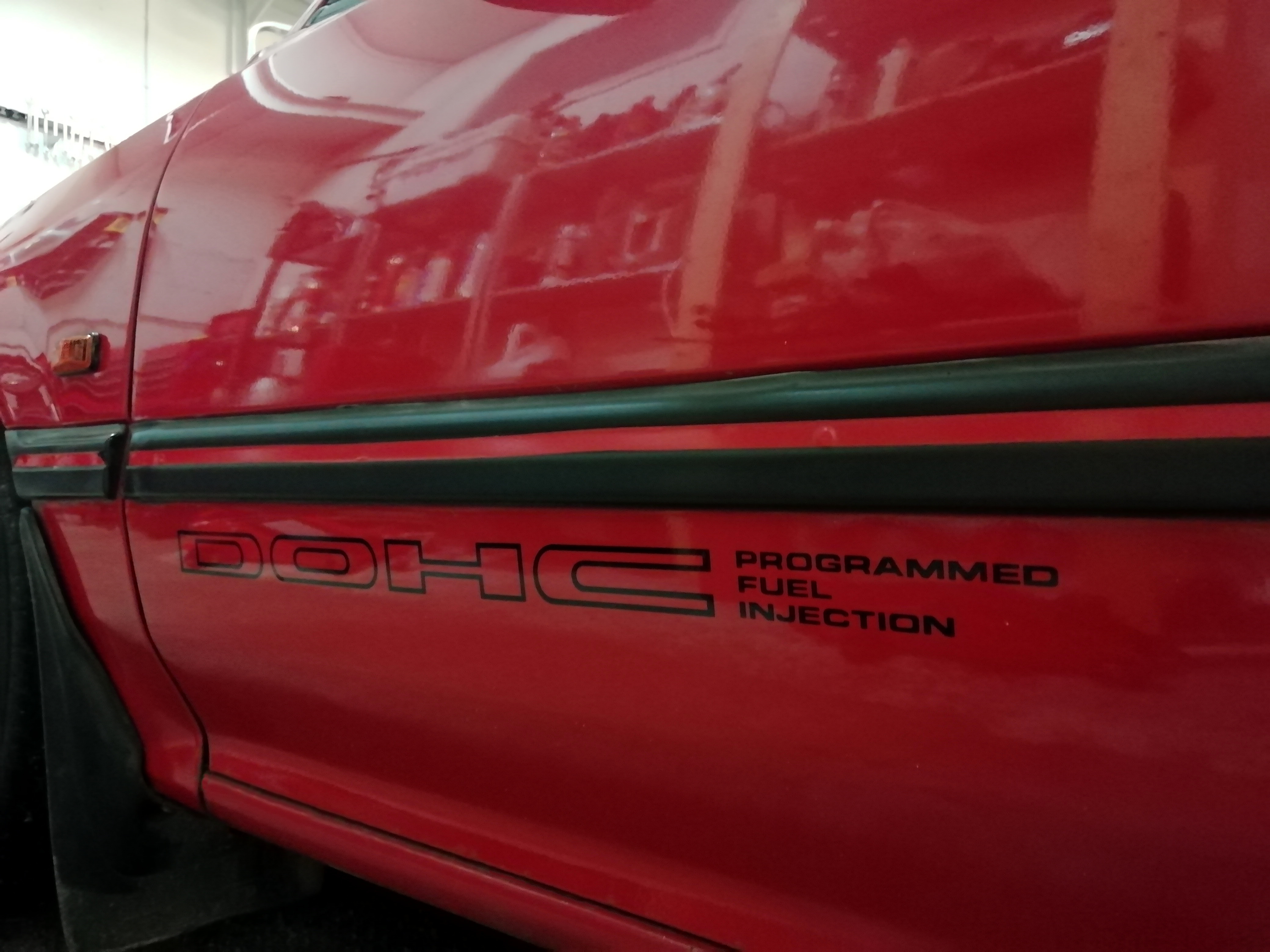 Side profile. My phone could have done a better job at capturing the details. But it's not a camera after all. 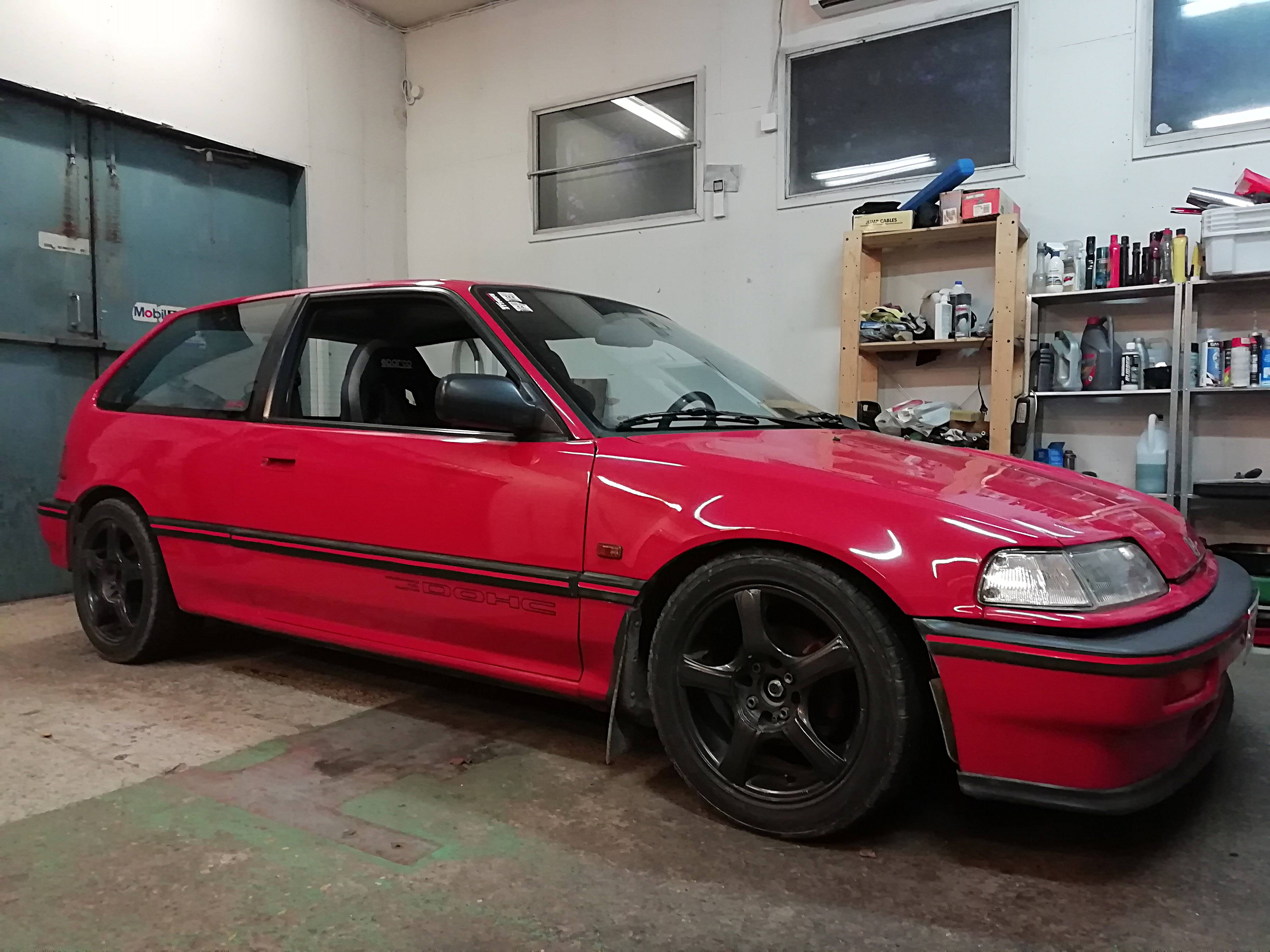