I'd say it's built in similar fashion to the European counter part. It's a steel ladder frame with plywood and studs. Just like a house, but all stapled together.

Just wondering how on earth a brand new V8 pickup can be too weak to tow it.

Did you run the track in the truck?

Didn't really get a chance. They had equipment on the track, so I just putted down to the finish to make sure the timing system was working.

Another trip for a timing system install. A little over 800 miles this time. I'll have to go back in a couple weeks when they finish everything that was supposed to be done this week.

Truck is nearing 20,000 miles. Nothing bad to report other than a creaky drivers door panel. I'll also need new tires in the next 3-4k miles as I have neglected rotating them.

Didn't know Frontiers could drive straight up a wall while pulling a trailer...

The trick is the wornout BF Goodrich tires...

Not sure what happened there.

A few days late, but I thought I'd update everyone on one year with a 2014 Nissan Frontier. I bought the truck last year on September 13th. It had 3,030 miles as I rolled off the dealer lot. In the past year I have put over 30,000 additional miles on the truck. There have been multiple oil changes, a set of tires, three sets of wiper blades (I threw out a set of Bosch with only about a weeks use as they didn't work very well), one flat tire and really that's been all to ownership. There is a small squeak when you hit a bump or are on a rough surface. I can't seem to pinpoint the noise, but if I get time tomorrow I'm going to work on that problem. It's a good truck that seems to deal with anything I can throw at it...

The mileage will slow this year, hopefully, as I am not doing as much timing system work as I did over the past year. That's a good thing really, I didn't buy a new truck to wear it out for another person's company. I hope to outfit the truck for some light overlanding/camping over the next year and take it for a tour of the desert southwest in late 2016. Dragging along a wife and kid in this adventure should be interesting.

Anyway, here's a couple photos of the truck since the last set in March.

This was a track near Muscle Shoals, Alabama called North Alabama Dragway. It was very old school having been updated sometime in the mid to late 1970s. The tower was meant to mimic the NASCAR tracks of the day. I was called in due to some very dodgy wiring. I got them up and running, but it needed a total rewire. Not just timing system, but high voltage as well. Found lots of bare 110v wiring while I was doing my low voltage repairs. 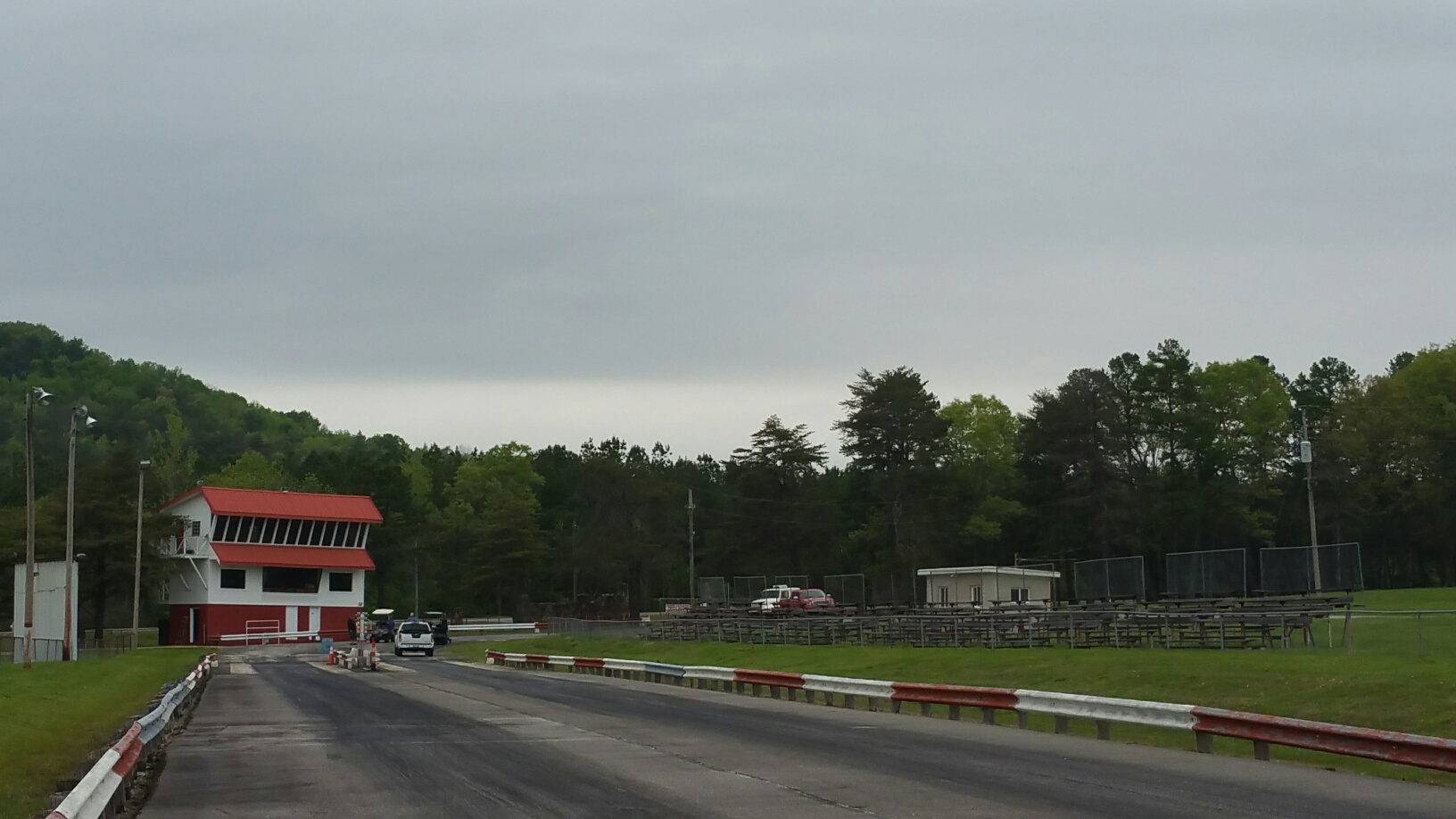 Two white Nissans. Which is faster? 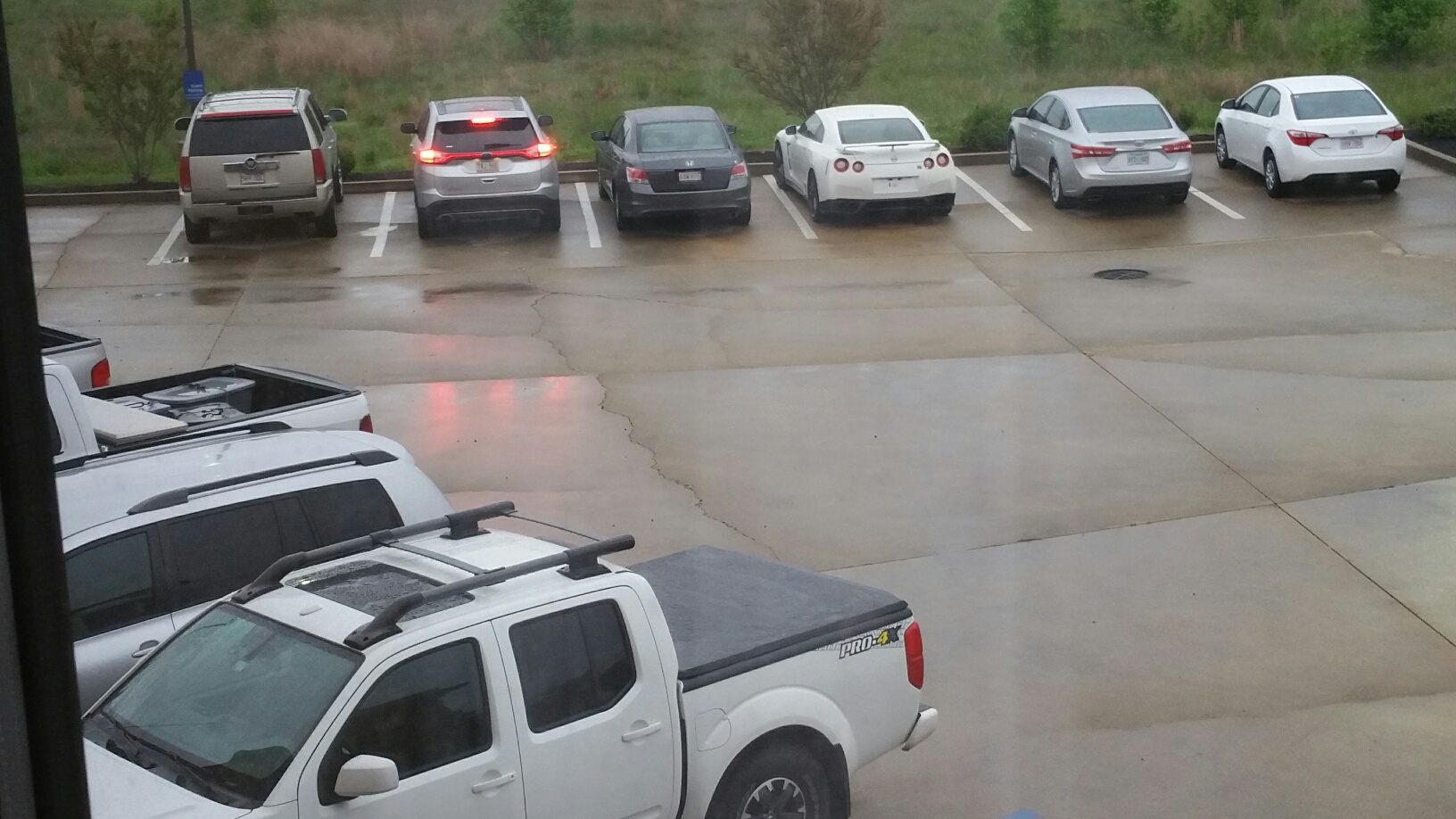 Doubles as a driver and a service truck. Here I was replacing the fuel driver module on our ambulance. 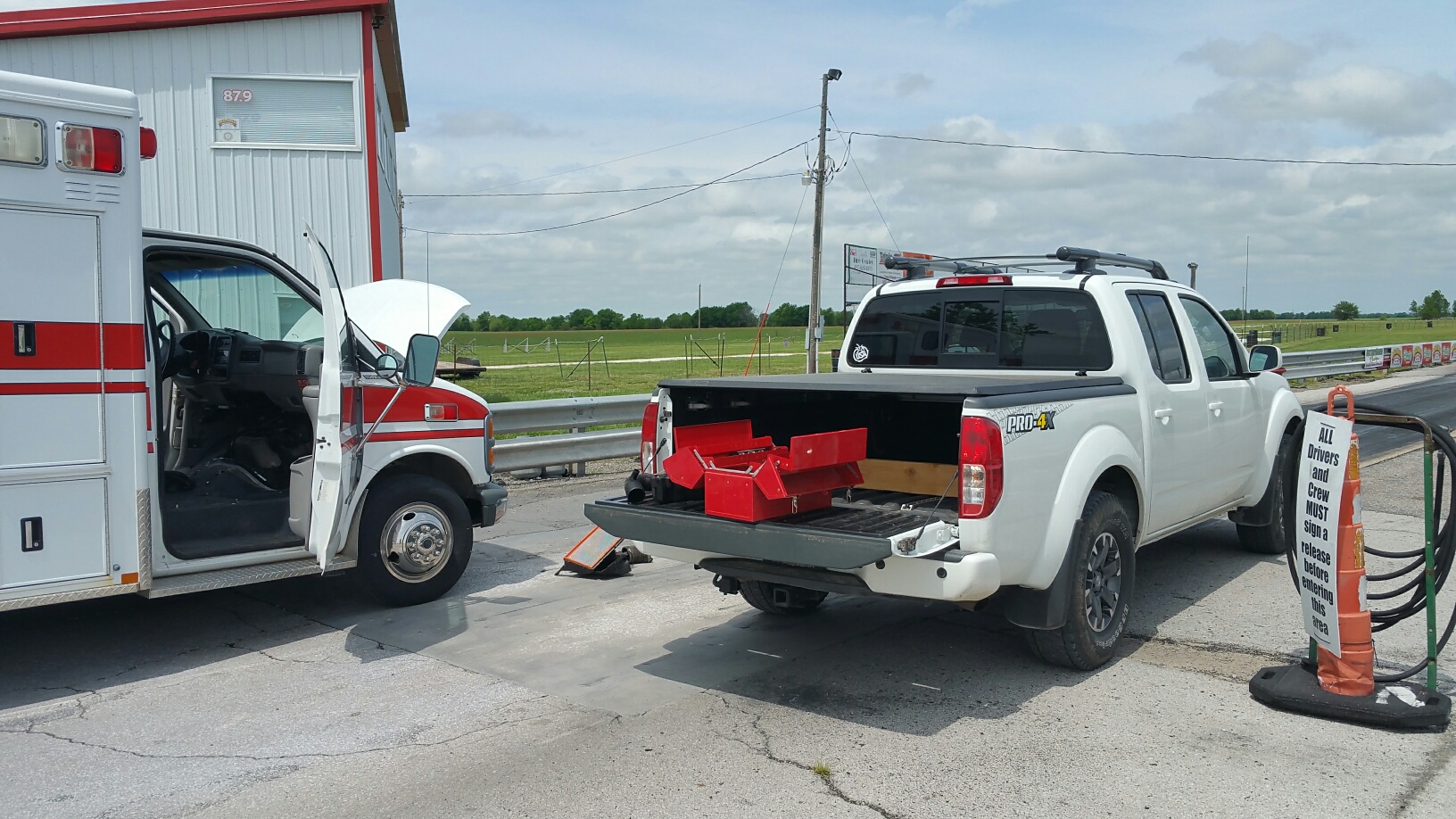 My two fun off-road machines. The bike was picked up used this year and is a 1999 Schwinn Homegrown 4-Banger All Mountain. 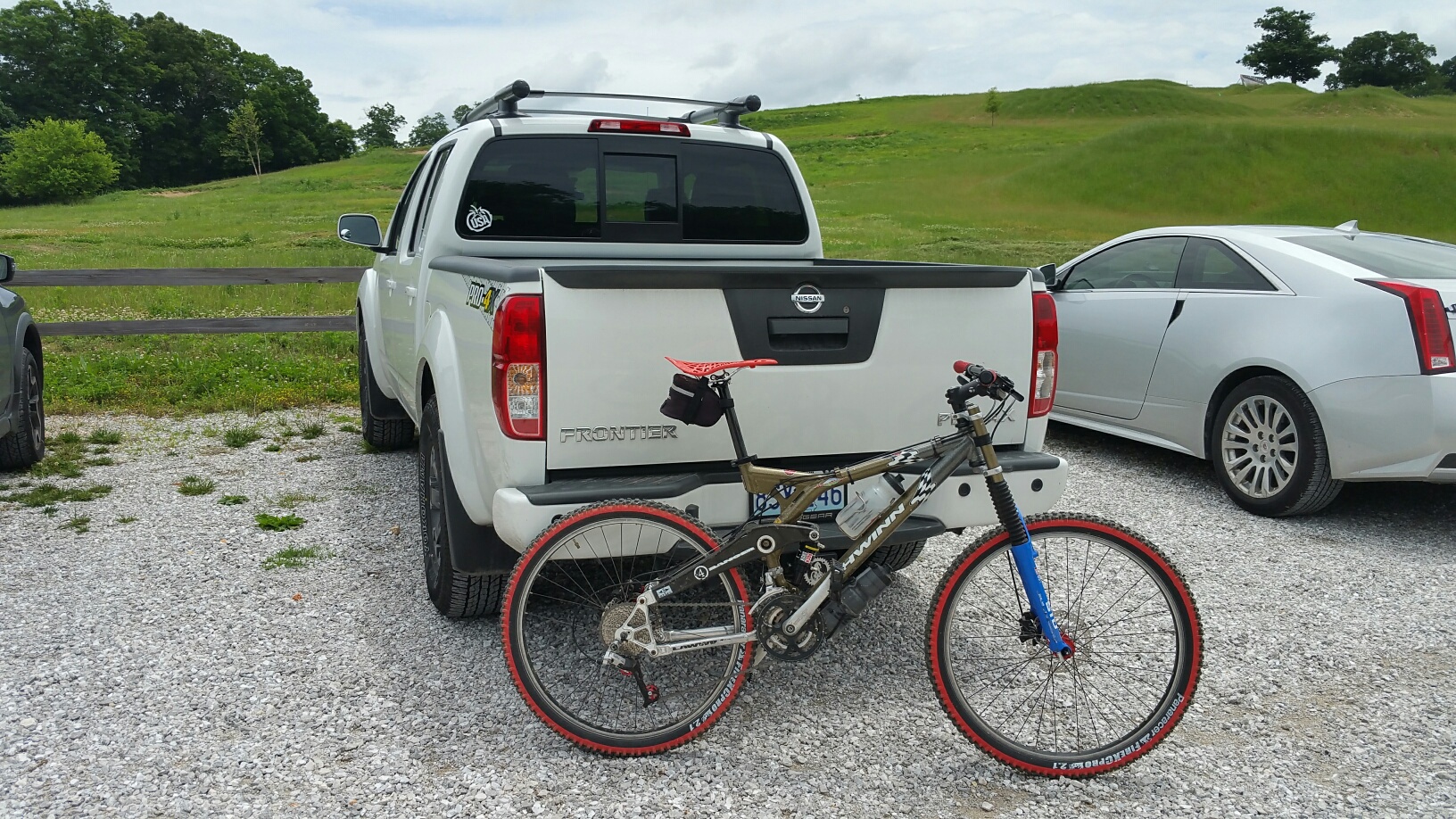 One of the many vehicles I have towed over the last year. It still doesn't run. I hope to fix it this winter and build it into a fire truck for the race track. 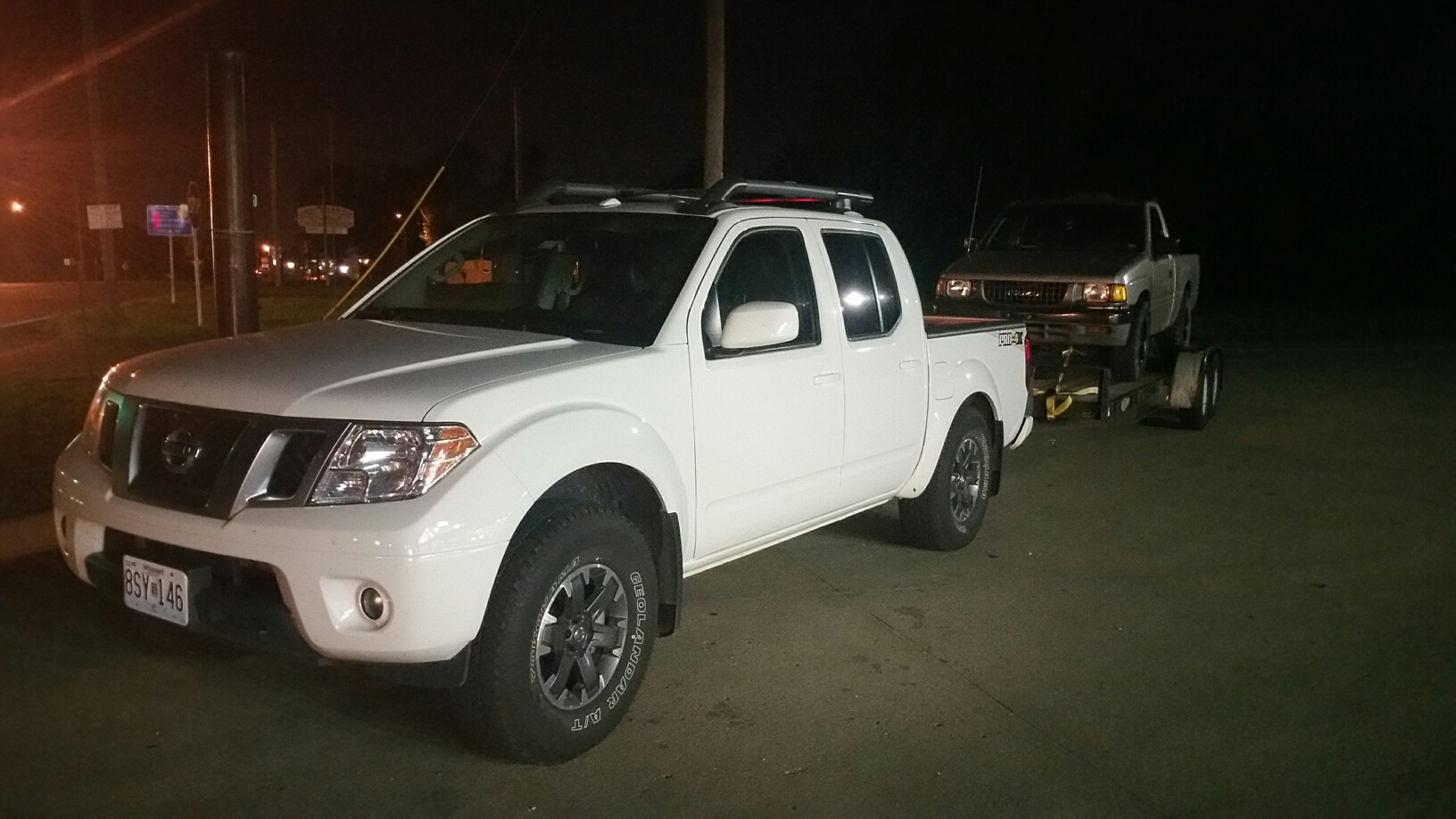 This shot is from tonight. Got bored and drove around on the country roads looking for flooded spots. Yes, I was that bored. 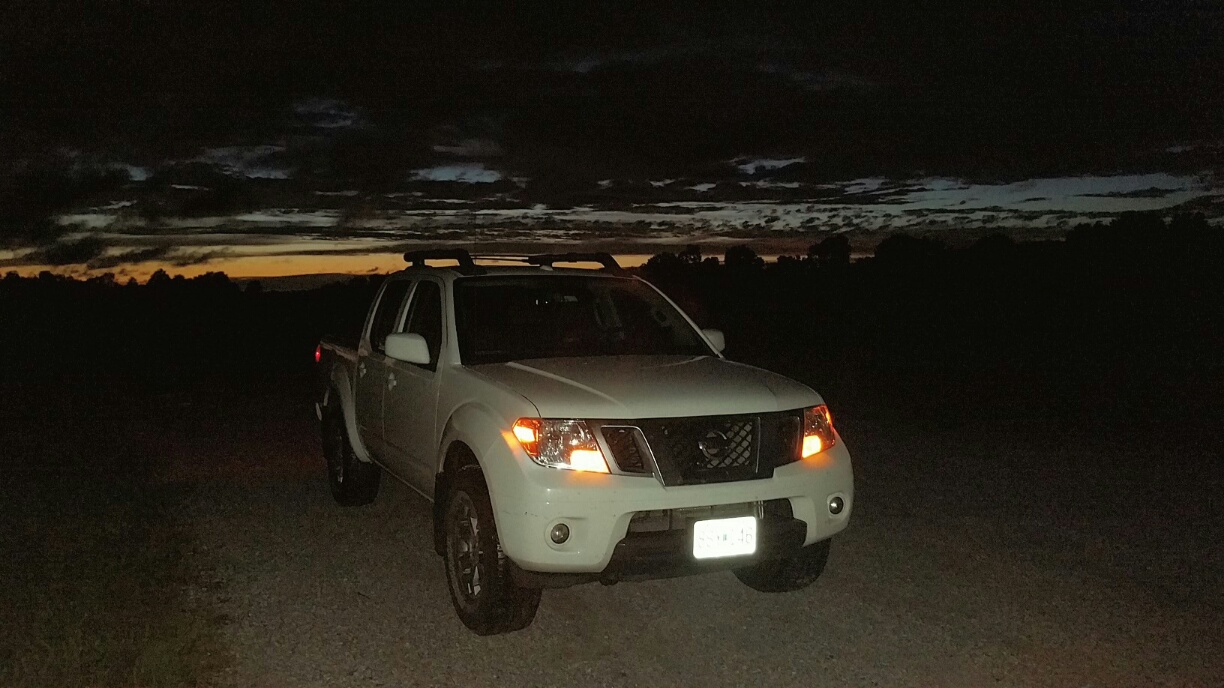 Bonus shot from tonight's drive. That's a farmer's flooded field. I didn't drive through it, I would have sunk up to the rocker panels. 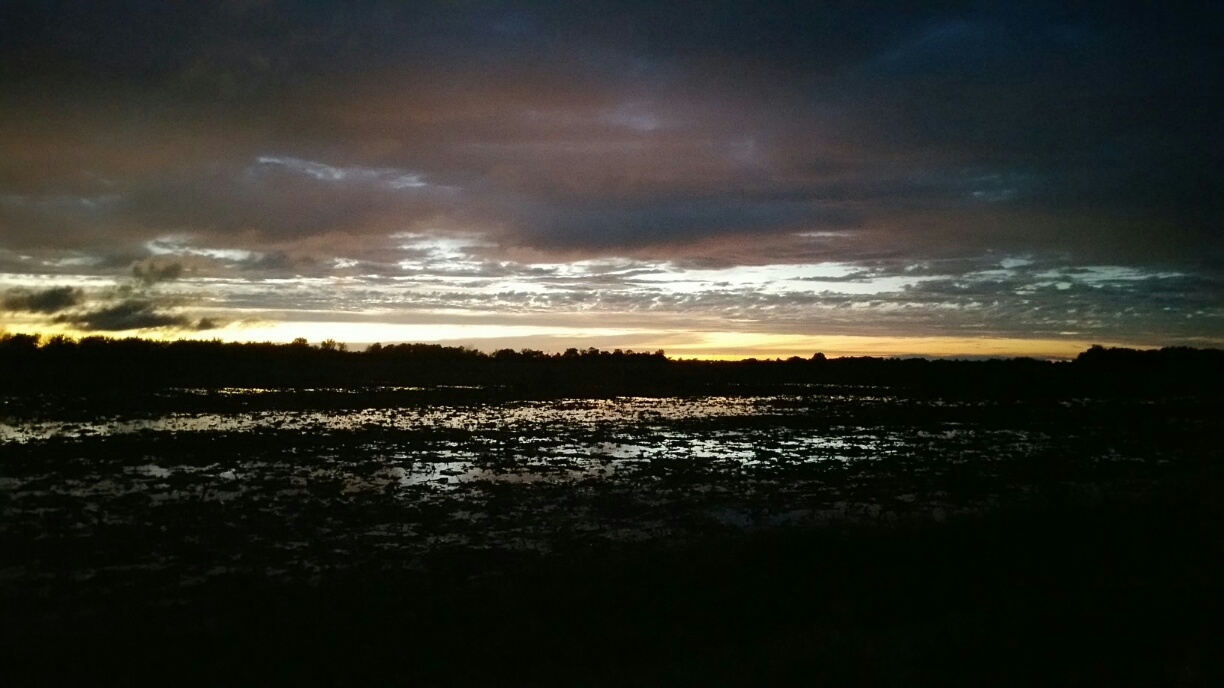 Depends on the terrain

RdKetchup said:
Depends on the terrain
Click to expand... 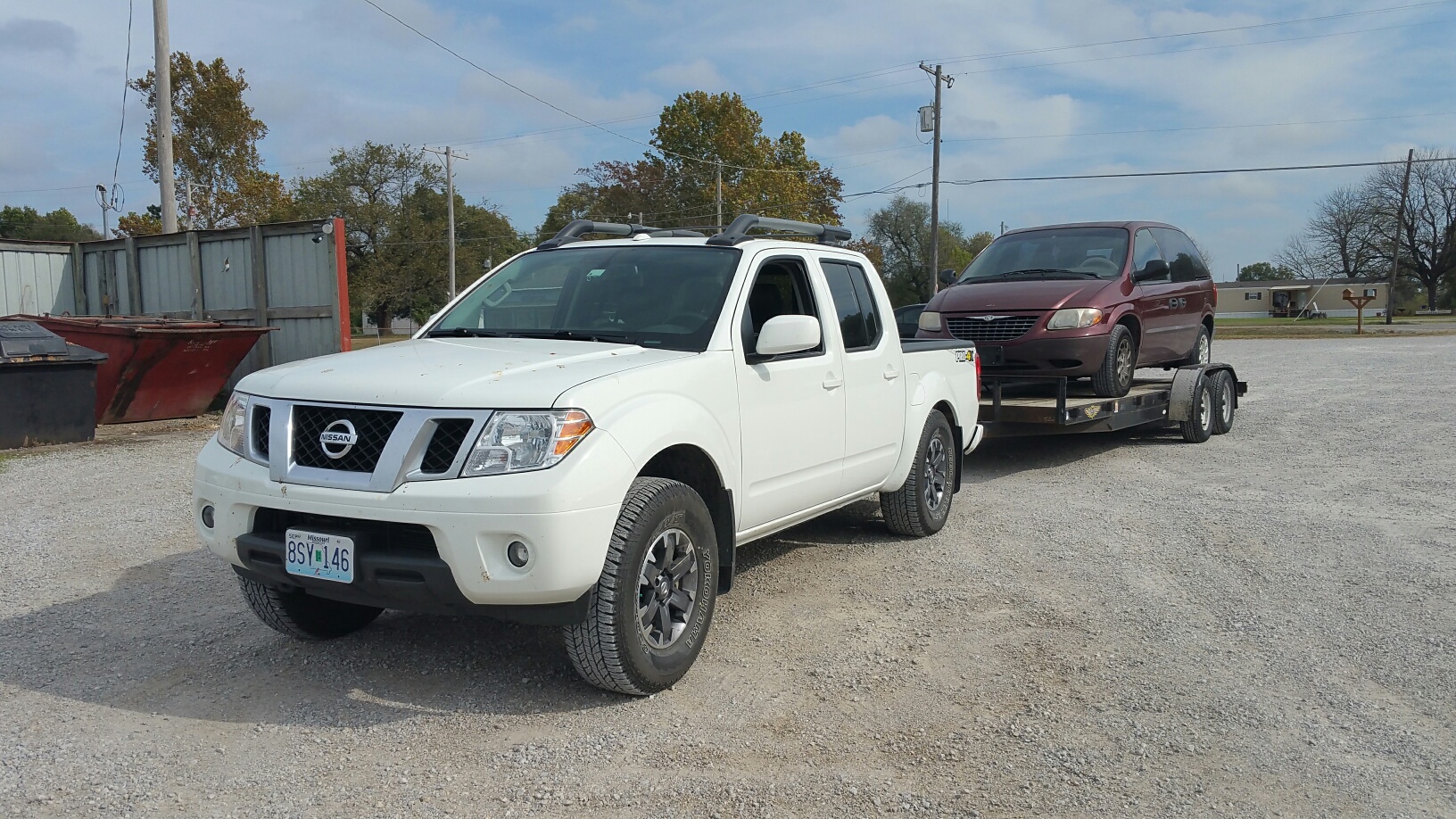 Frontier to the rescue of a friend who's Chrysler mini-van's water pump shot craps.

Craig, were you running from the cops in Missouri again?

Weird they let him go that long.

Another set of Craig's board so let's get the truck dirty photos... 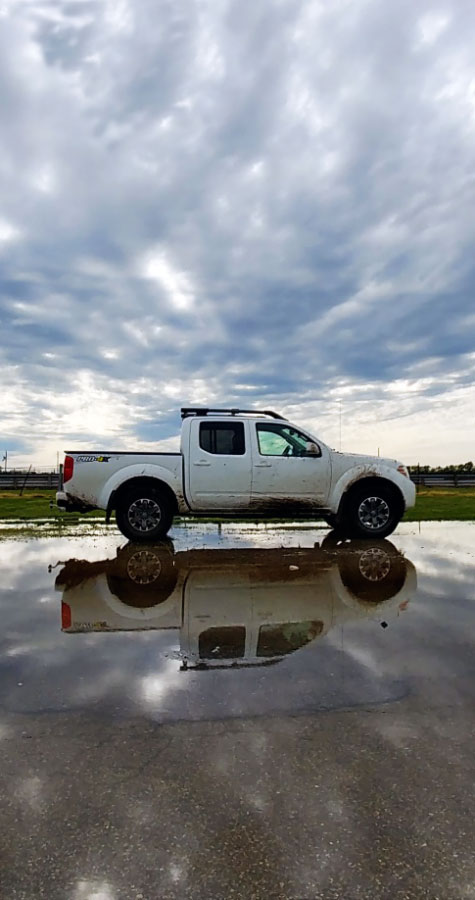 I'll be digging grass out of the skid plates for the next century...

Took the truck on vacation to Colorado over the last week. Best road we drove was the Phantom Canyon Road between Ca?on City and Victor/Cripple Creek. It was built on an old rail line and runs mostly through BLM land. It's 25+ miles of gravel with some amazing views, tunnels and drops. I highly recommend it if you are in the area. 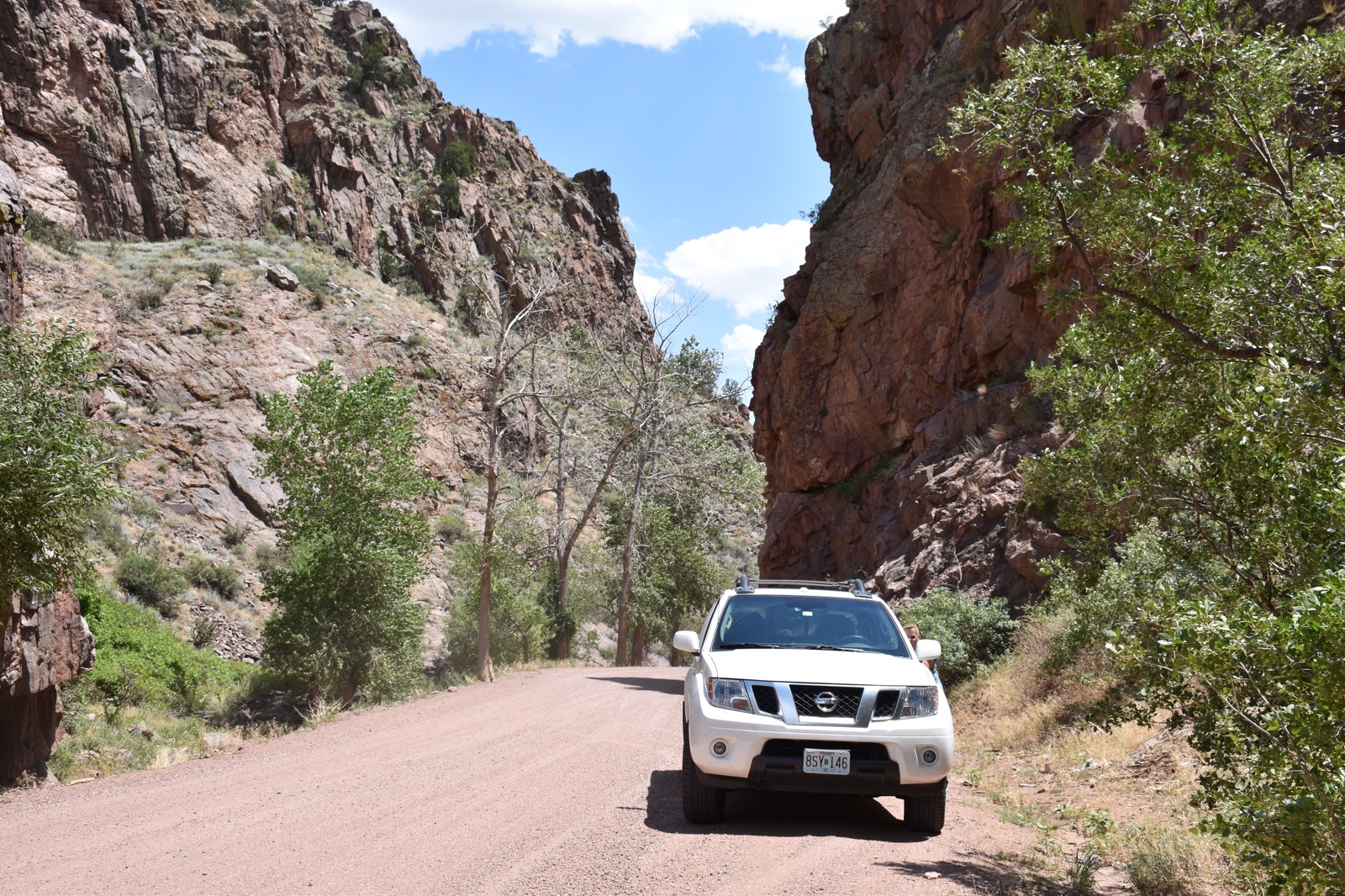 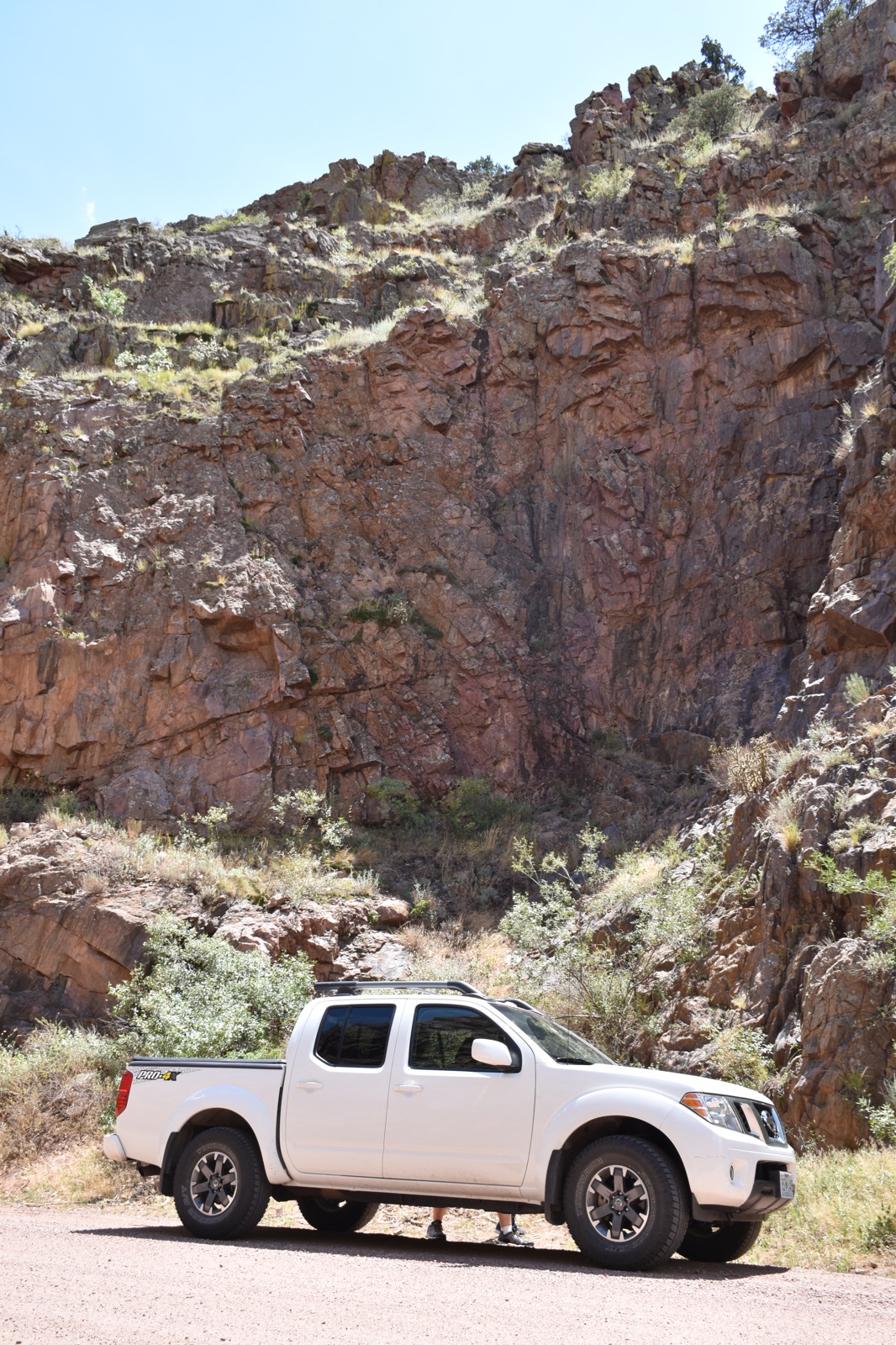 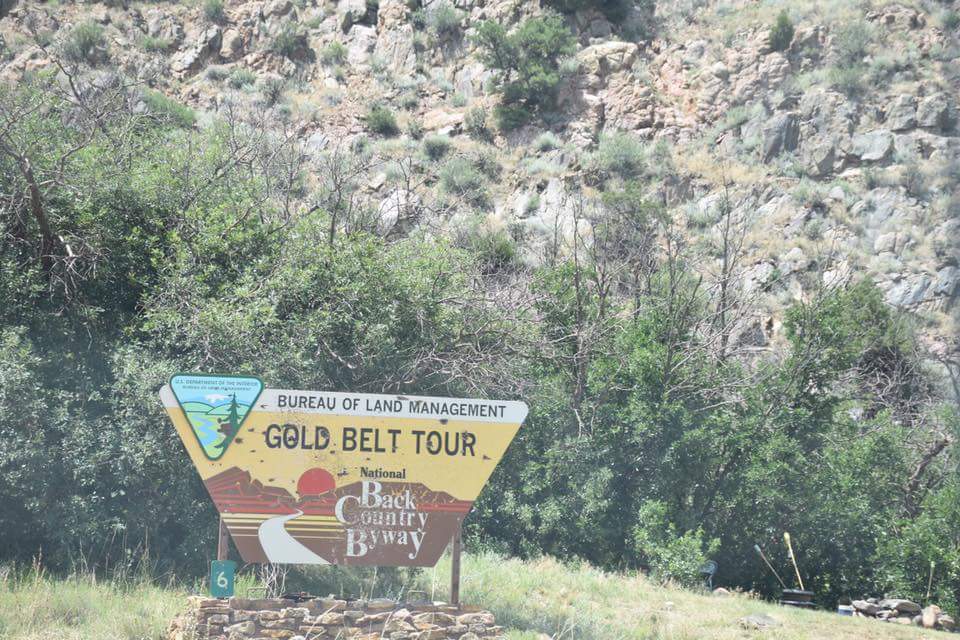 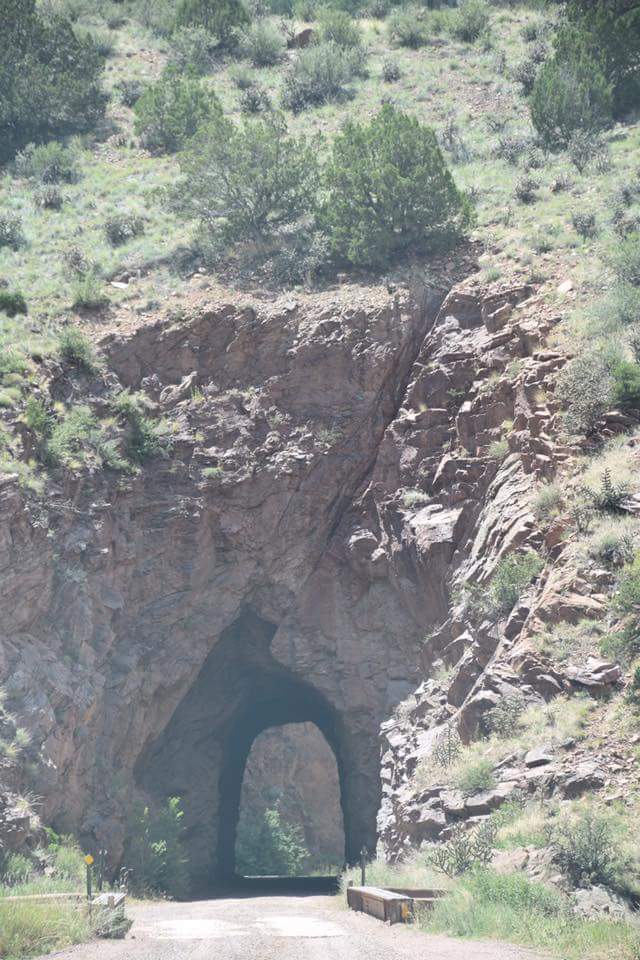 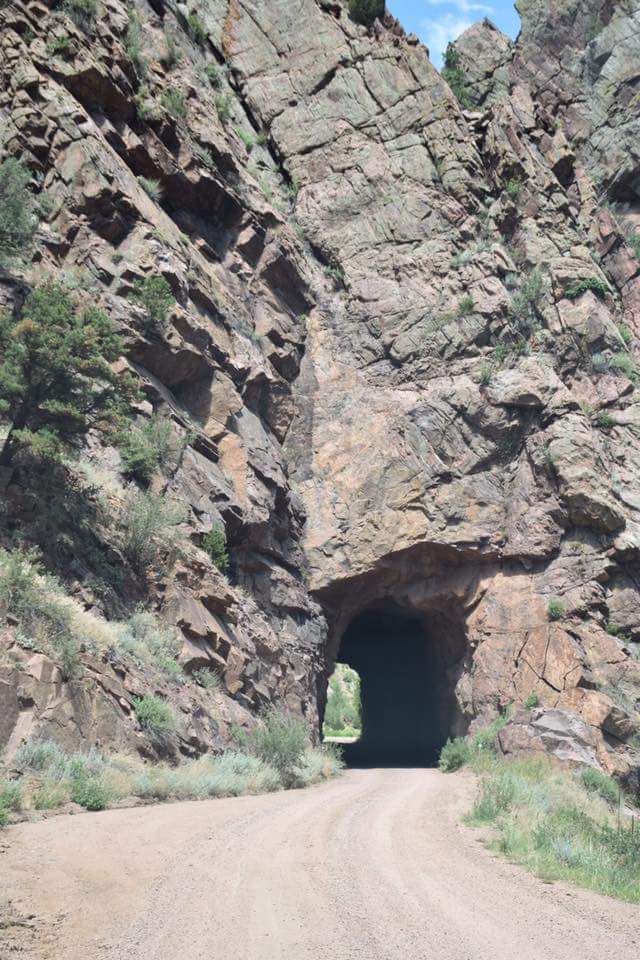 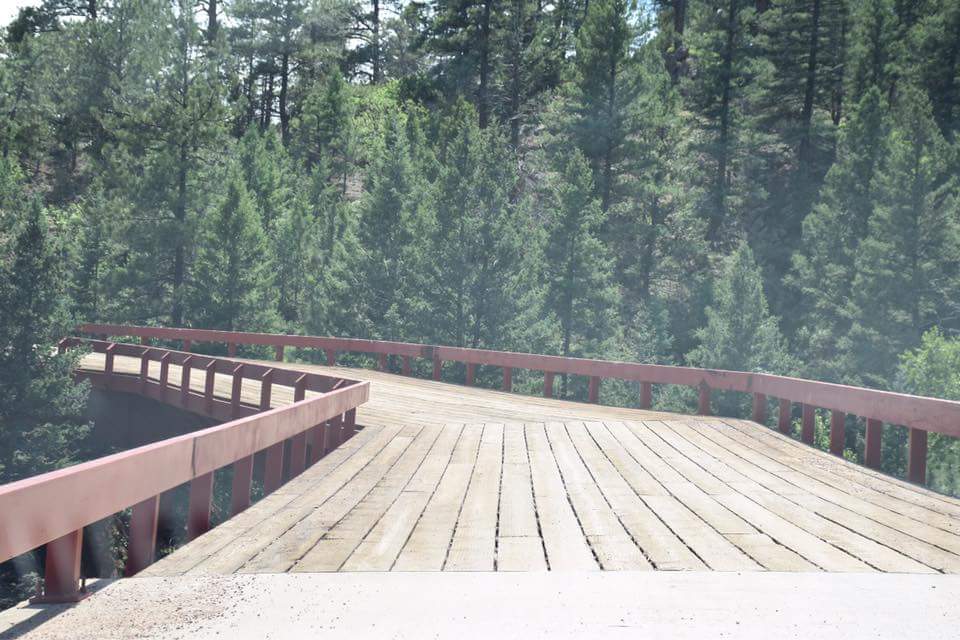 Wow, that looked awesome, Craig. Accessible only by an off-roader, or just gravel conditions?

Just gravel. Never even engaged 4wd. Ashamedly, there was a Prius driving the same road...

CraigB said:
Just gravel. Never even engaged 4wd. Ashamedly, there was a Prius driving the same road...
Click to expand...