Ownership Verified: I was looking for a new car. Instead I got a horse...

So awesome!!! Congrats! I love the stripe fade.

This hasn't been updated for far too long...

Still having fun with my Pony

I completely missed this until you mentioned it elsewhere. Congrats! You've nailed the point of the Mustang completely, it's all about making the driving experience an event each time you take it out.

How has driving it around Europe been in the last two years?

argatoga said:
I completely missed this until you mentioned it elsewhere. Congrats! You've nailed the point of the Mustang completely, it's all about making the driving experience an event each time you take it out.

How has driving it around Europe been in the last two years?
Click to expand...

It’s been fantastic. Never had so much fun in a car. The Mustang is 100 % entertainment. It’s not perfect, it has its quirks and shortcomings, but a big grin still creeps on my face every time I start the engine. In times where people try to make their exhausts louder because the modern turbo engines dampen the engine sound, it’s so cool to have a naturally aspirated 5-Liter V8 that burbles, thunders and roars - depending on how high you rev it.

Best buy I ever made.

I still have total strangers come and talk to me, ask questions or express their admiration for the car. Sometimes I get a thumb’s up when I pass people and especially kids show a lot of enthusiasm.

If anyone who reads this is in doubt whether they should do it: Do it! If you’re a petrolhead, you won’t regret it.

On the surface, it doesn't look so bad at first glance...

A bit of scratched and dented plastic, a cracked reversing light... 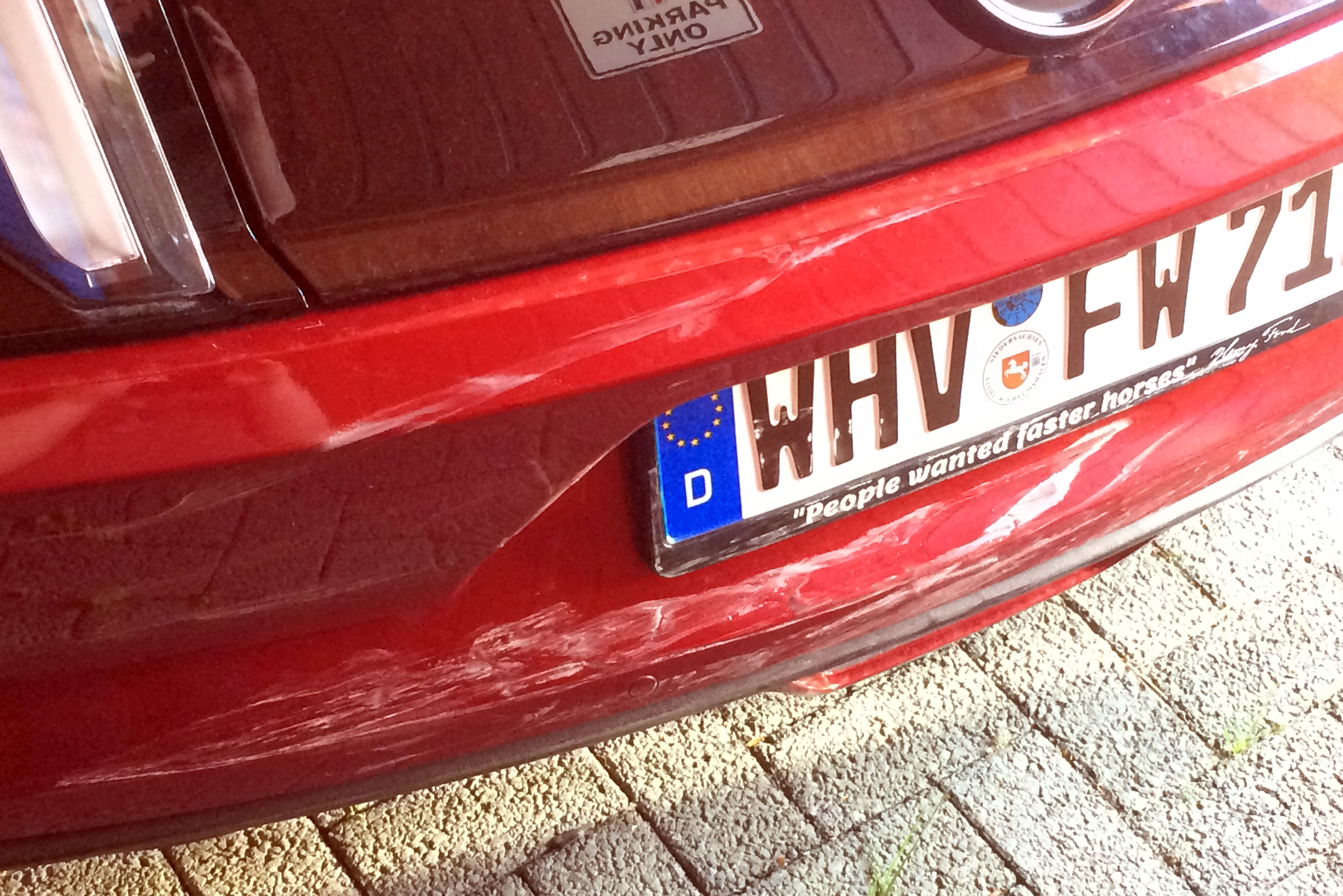 And a scratched license plate. 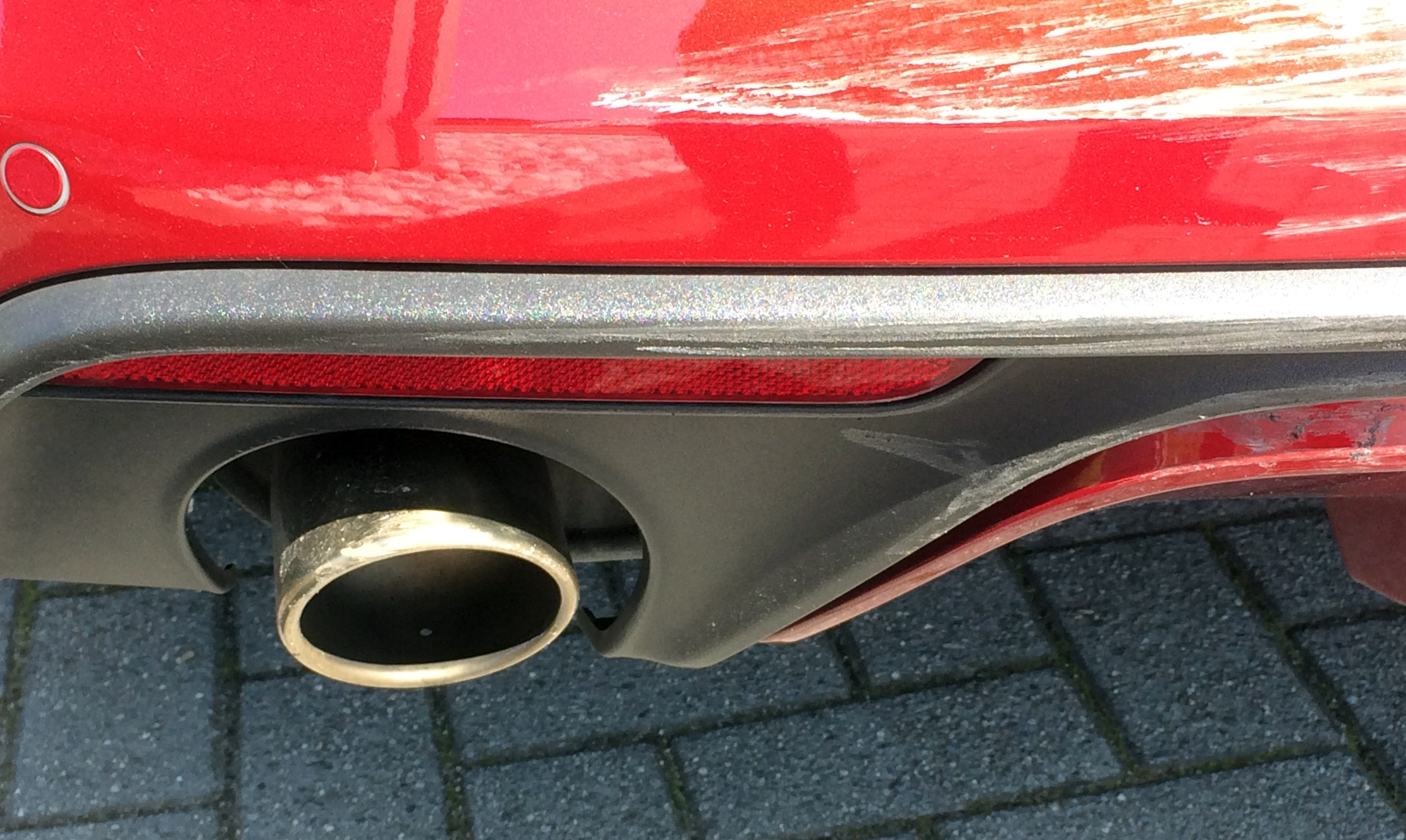 On second glance, the left exhaust was hit as well. It was scratched a little and pushed in a bit... 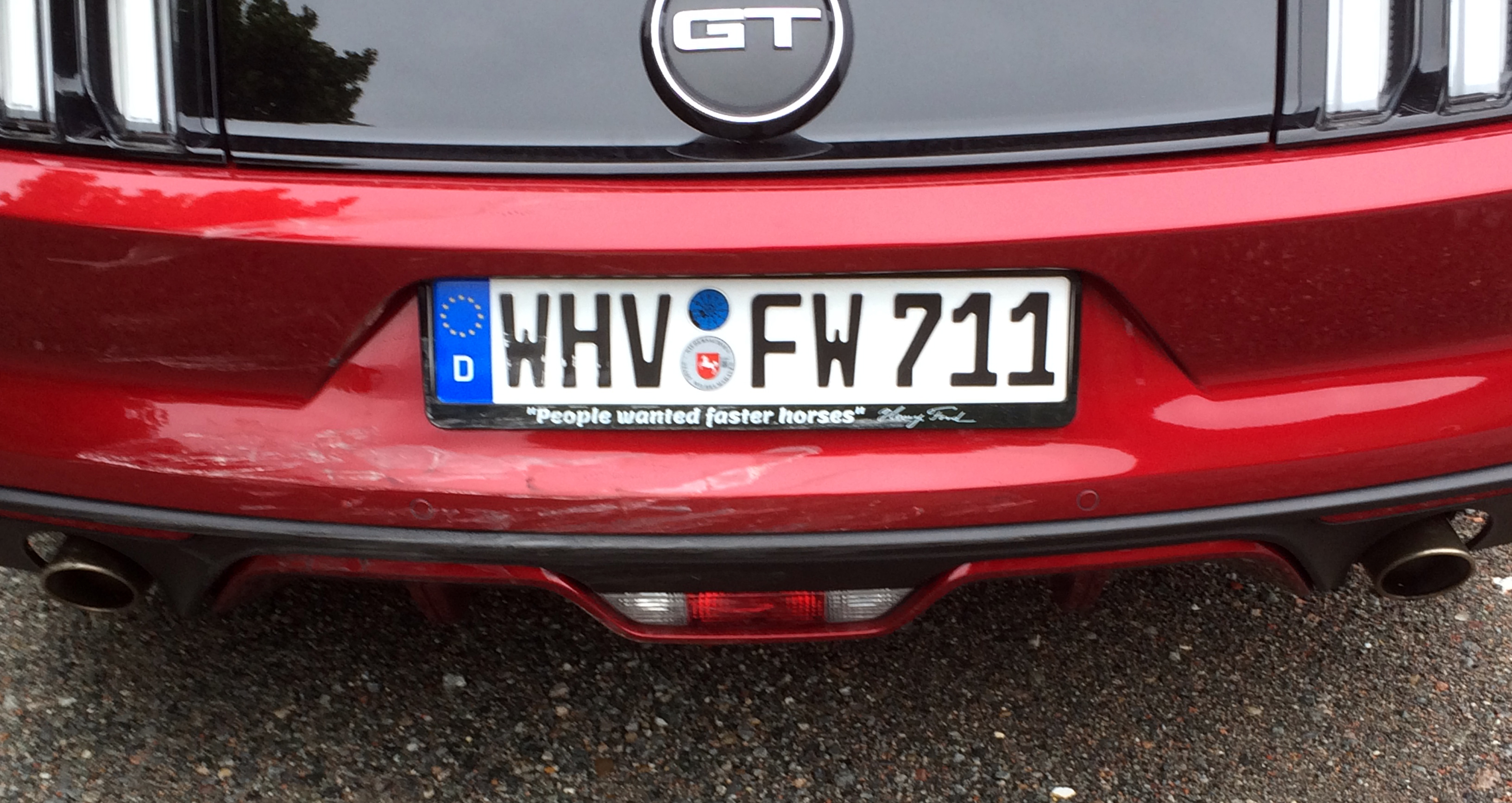 So, what had happened?

Nothing spectacular actually. I just wanted to turn right into the driveway of a bakery to buy some donuts. I had almost finished turning off the road when I was hit from behind. She must have been deeply asleep (or doing something else than driving), since it happened at a very low speed.

A bit of luck under the circumstances: her car bumped into mine at a 45-degree angle. She bounced off, so to speak. And since the driveway was a bit sloping, my car's rear was raised a bit, so she "only" hit the rear bumper and not the boot lid or the tail lights.

Here's the entrance to the bakery from the opposite direction when I left again. I was coming from where the bus stop is and wanted to turn right. That was about 50 meters from a roundabout with a speed limit of 30 km/h, which was lifted to 50 km/h shortly before the bus stop. My guess is she's driving there every day and is used to automatically stepping on the accelerator, not considering that somebody in front might be turning off the road. 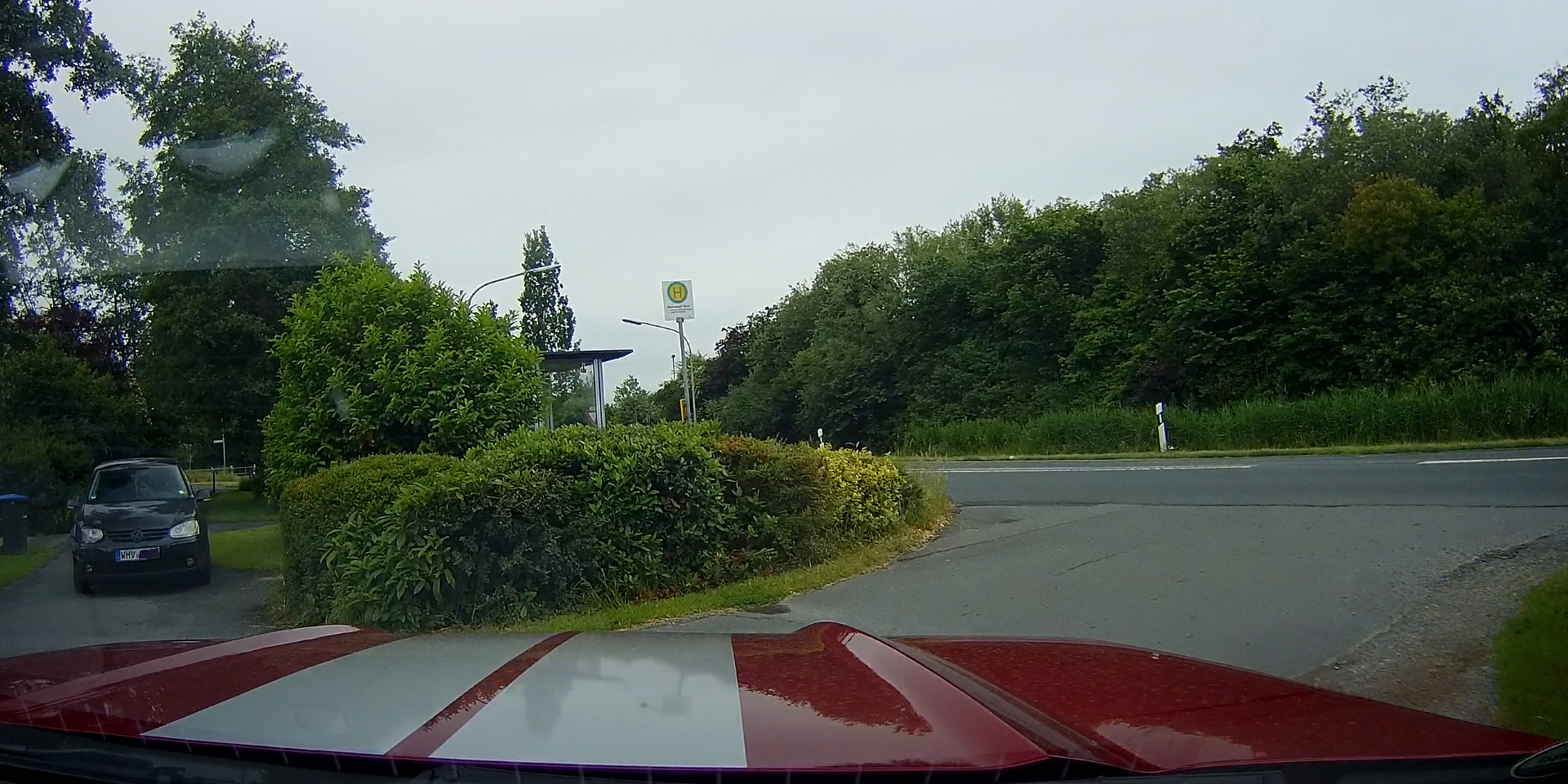 Her damage looked a bit more severe. She got dented metal as well (which luckily I didn't): 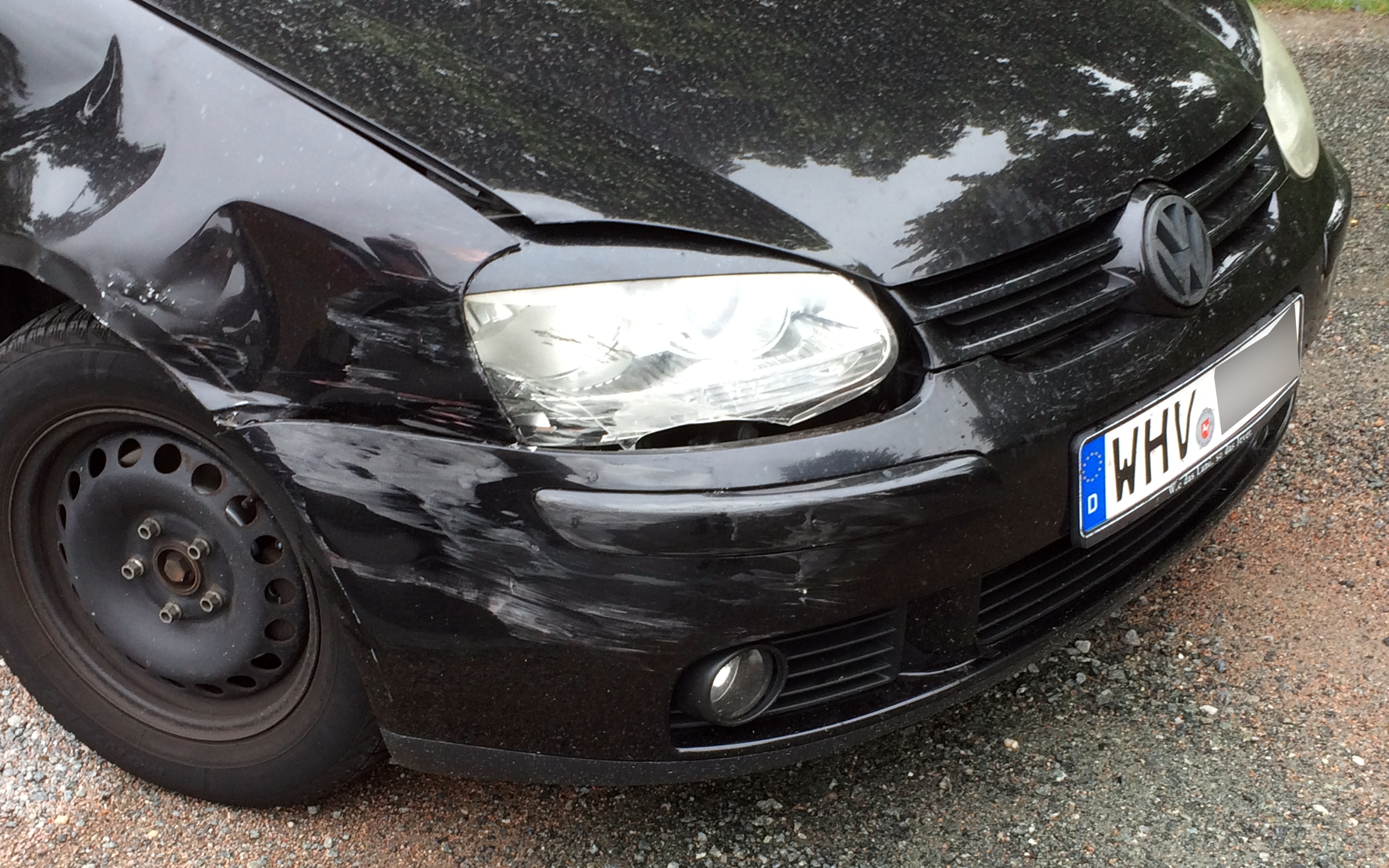 Obviously, she was a beginner and immediately broke into tears. Police wasn't necessary, there were witnesses and I have a dash cam. Her insurance recognized in the meantime that she's 100 % at fault.

It happened on a Saturday, and the following Monday a surveyor came by to examine the damage. Preliminary result: 4,400 Euros. Next week I'll bring it for repair. I will get a rental car, a Skoda Octavia diesel... yaaaaay...

Anyway, I don't have to worry about anything, my repair shop will settle everything through their lawyer with the opposing insurance company.

For those who are interested, here's the recording of my dash cam: Click me
Last edited: Jul 2, 2019

She had a böser Blick! That's why she did it! She is inherently evil!

Anyway, bummer, but luckily not a lot of damage.

Aw, bummer there. At least it's all fixable, not on your dime, and nobody was hurt. Poor learner driver... that's gotta be a rubbish day for her.

Well, I feel bad for that happening to you, but I also feel bad for the girl in the Golf, because a similar thing happened to me. When I was a beginner driver, not even a full week after getting my licence, I hit a parked car and scratched it. Only in my case, it was the other car that was a Golf, heh.

But well, shit happens, and at least you don't pay for it.

We just bought a CPO Jetta for my fiancé, and some of the cars had accidents on their CarFaxes, and the guy at the VW dealer said that a new painted bumper from VW is like $4k when trying to pass off the "over $x,xxx in damage" car.