Last summer I decided I wanted a Sierra. So I saved up, and looked and looked and searched and searched ... well, it is not easy trying to find one of these. Very, very rare cars nowadays - especially when you don't want one in the absolute basic plastic trim with the 1.6 CVH engine or one with the automatic gearbox, which I both didn't. I wanted a car that is worth preserving it.

I first found it two months ago, in january. Wasn't quick enough with buying it. Now it was for sale again, so I grabbed it as quickly as I could! 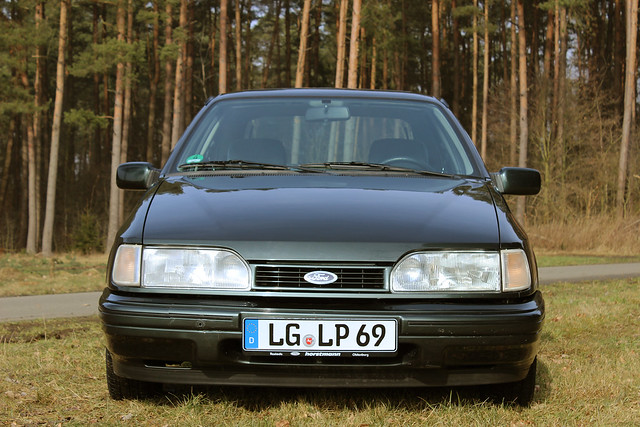 The Sierra was born very late, in january 1993, just shy of the release of the then new Mondeo that was just around the corner.
It's got the 2.0 DOHC engine. Some love it, some hate it - so far, I like it. It's smooth enough, but not buttersmooth. It growls and the induction noise makes you think there's no air filter upfront (there is, I checked it). 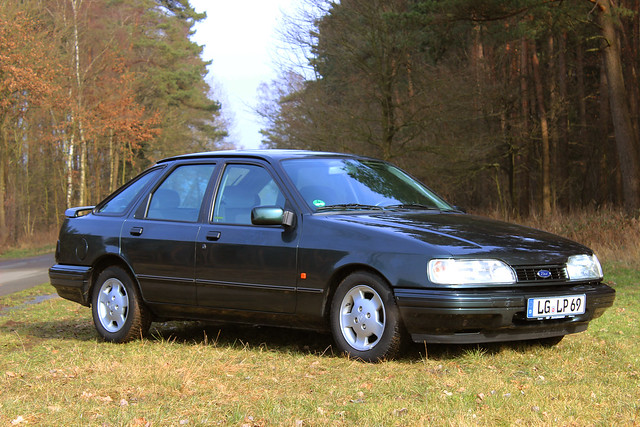 When I first test drove it, I thought the gearbox was rather weird. But I guess this was just mostly due to it being negative degrees centigrade. After having it driven for around 300 kilometers in decent warm weather, the gearbox is just as it is often described in various online magazines and blog posts - typical long "80's" throws, but precise to click the gear into place. The clutch is very... mushy though; a sporty clutch with a more pronounced biting point would help a lot in feel. 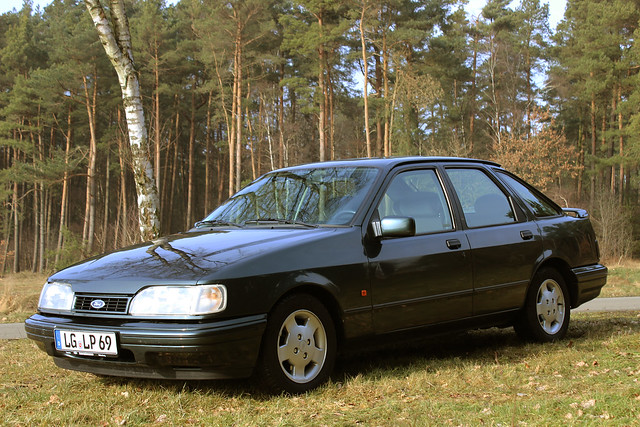 I had contacted the guy who originally tried to sell it in january, as I said, without success. Now the guy who got it had to sell it due to backpain, as he couldn't find a decent enough seating position in the Sierra. It's a little weird to adjust the seating position with the knob upfront; you can't push the seat down as you are used to in other cars. Since then he fixed a couple of things, namely the paint at the rear hatch and the leaking headers, which poured exhaust fumes into the cabin. I knew of both faults originally, so it was more than okay for me to pay a little more to the guy now compared to what it was originally sold for in january, as he fixed both things.

The car is also equipped with a limited slip differential, which works great. And it does have 40 mm lowering springs installed, which weirdly aren't registered in the car's papers, but apparently the TÜV didn't bother ... hey, I mean, come on - they are painted bright red. They also generate a lot of camber at the front, as the car is not designed to adjust that. As expected, that gives it a sharp turn in, but at the cost of high speed stability.

I do like the interior a lot. Very few rattles and creeks, no cracked dashboard, good materials. This is the "top of the line" interior trim, the Saphir. Oh and the seats, so cushy and comfortable! Though one day I'd like to change the rev counter to one from the Scorpio I. 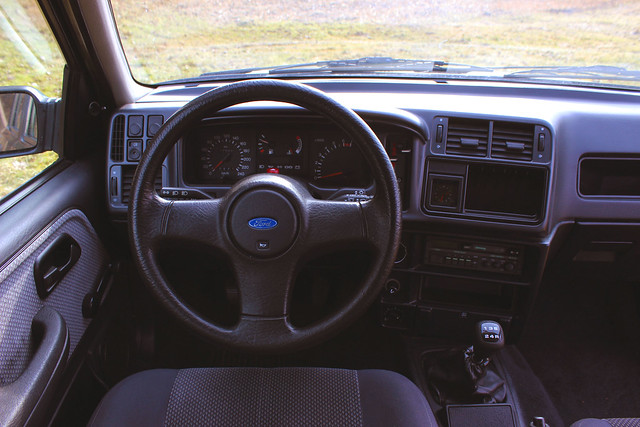 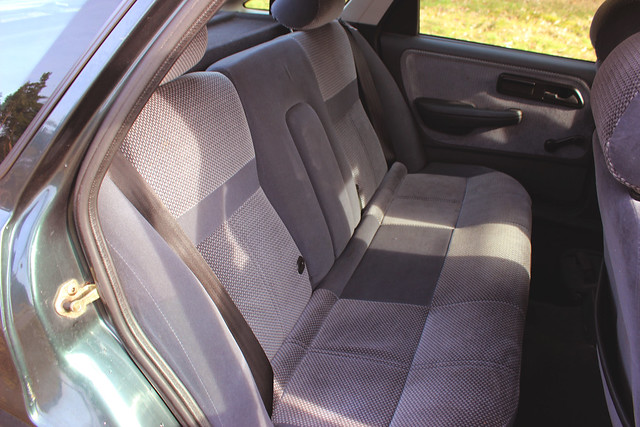 I do wonder if anyone has ever sat in the back of this car. The first owner was born in 1926, and the car has done 117.000 kilometers so far. Typical grand dad car, as it seems. I am the fourth owner. I originally wanted a Schräghecklimosine, am I bothered I got the hatch? Not really, no! I rather like it.

Complains? None really, so far. Engine bay is very tidy and does contain lots of new-ish (at least looking) parts (engine bay pictures will follow soon). The car has very minimal rust spots and I will have a look into them aswell as sealing up the underbody (or, actually, the whole body), either doing this myself or having a professional do it. The fuel needle moves a little up and down, but that's just an old car thing, really. Also, the needle for the engine temperature barely moves into the "normal" positon - not sure if that is due to cold outside temperatures, or the needle or the thermostat working a little falsely? Any help to this would be much appreciated.

One little anecdote: When I registered the car, the Kraftfahrzeugzulassungsstelle-office did have internet connection problems. When I was handing out the guy the papers, I was realizing he did know a few things about the Sierra. Him not being able to work on the papers, I asked him about this Ford Motorsport-Kalender on the wall. He told me he is a Ford guy deep within, owns three Sierras, and has a garage full of spare parts (showed me proof pictures of it all). Mine is the eigth registered Sierry in my county, and three of those are his. Which leaves four others, one of which was always parked around the corner from my apartment but seems to have been de-registered recently as I have not seen it in weeks. He told me, recently a guy came and did that with his Sierra, I asked if it was a blue one, and apparently it was... small world. 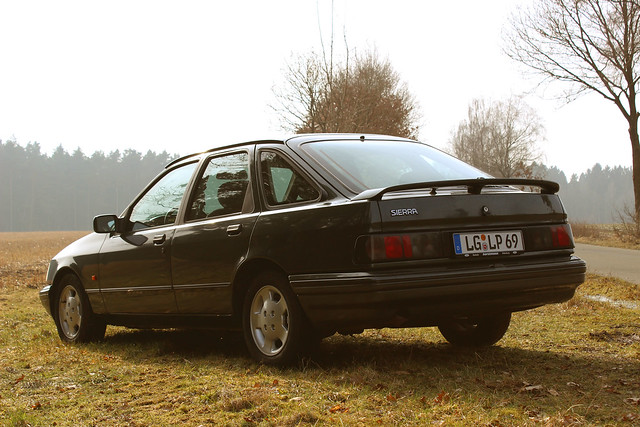 I am yet unsure if I should swap out that original Ford radio, as it, together with the (for the early 90s) rather good sound system, works rather brilliantly. My Kienzle is still lying around though, waiting to be installed.

Here's my proof pic that is not on paper, because as always I forgot to bring both a pen and a paper with me. If this doesn't count, I will submit a proper one later on. 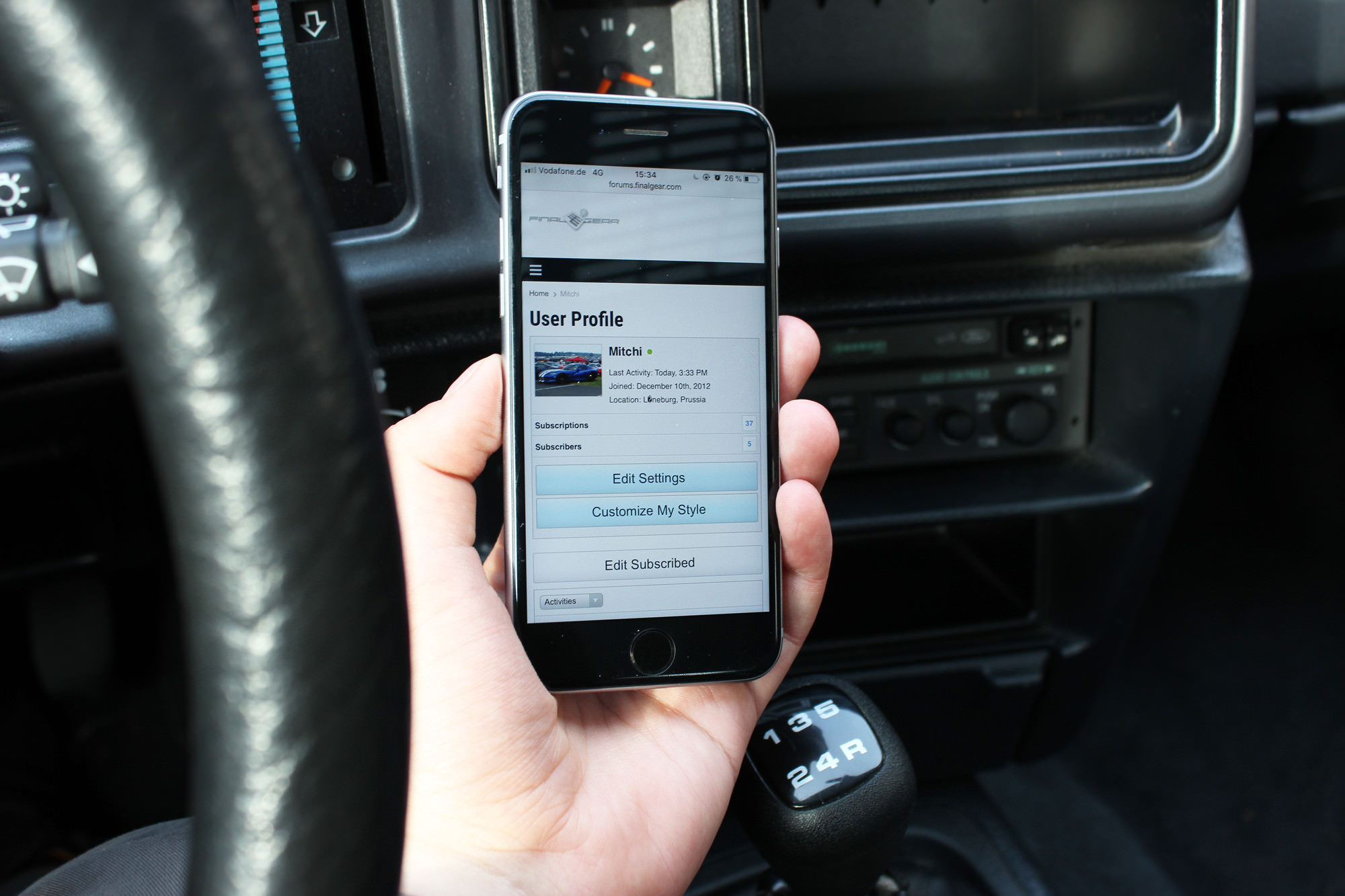 My god. That looks absolutely fantastic and in excellent spec outside of the Cosworth level. Congrats!

My god. I haven’t seen one this clean in ages.

Son, I told you I was trying to find that surviving unicorn from 2003!

Awesome!!!! I demand to see it at ringmeet. Engine bay pics plz.

Hey, this is really nice!

My Ford part of my heart just melt. This is awesome!

Posmo will be your main man for any troubleshooting or tuning, so ask him for precise advice. As for the stereo, I'd choose the Kienzle since it fits the interior very well.

Problem is, the kienzle can't be bought new anymore

No no no, you got that wrong, I still have mine - laying around, waiting for it to be installed. I was told that Ford radio is worth quite some, but I do not want to sell it. I need to keep that for the sake of it.

Dammit! I now have the worst Sierra on the forum...
H

Congrats man! That is totally tidy

Look what arrived today in the mail! I ordered this original Sierra Saphir brochure on Ebay Kleinanzeigen the day I bought the car. What a lucky coincidence. This is just the start of building a complete package around the car. I am gonna scan and upload the whole brochure tomorrow here.

Here is the scan of the 1992 brochure (download link). I'd love to have a Schräckheck Coupe GT in Deauville-Blau-Metallic. So rare, these two door facelift Sierras! Though the normal limosine does have a sweet arse aswell. Such a Knackarsch! I do like my Schrägheck though. What I dislike is the estate version - never really got to grips with it. Same for both Scorpio generations.

Upon nicjasno's request, I did a couple of engine shots. And, while I was at it, a (semi-shaky) start up video. Because I always wanted to do that. 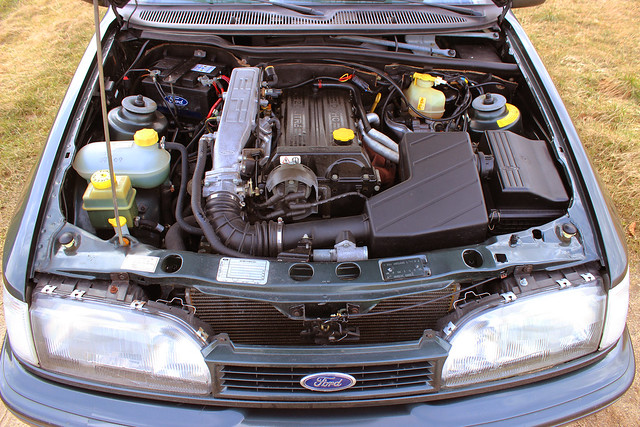 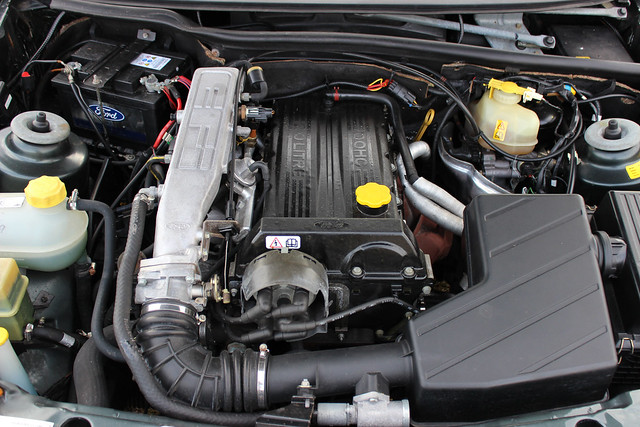 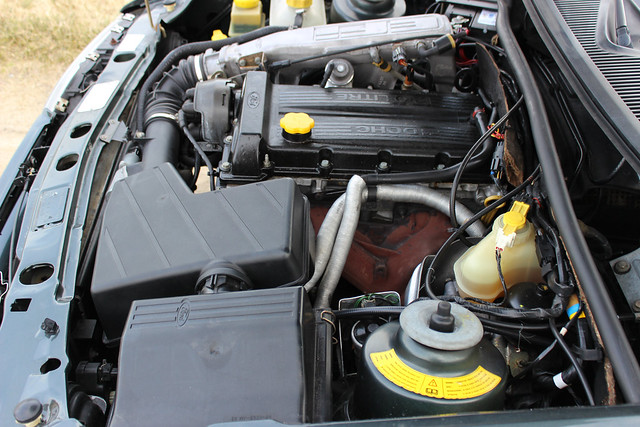 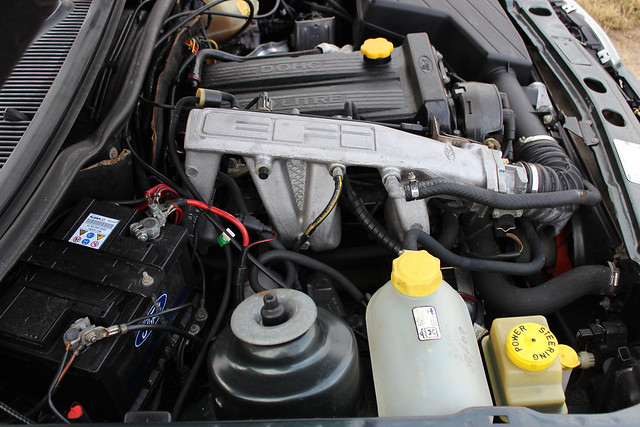 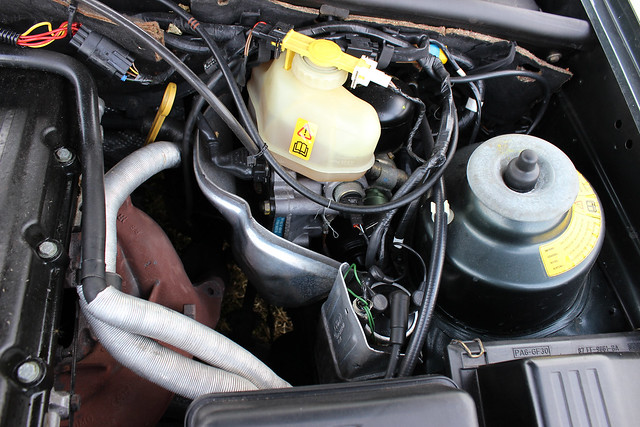 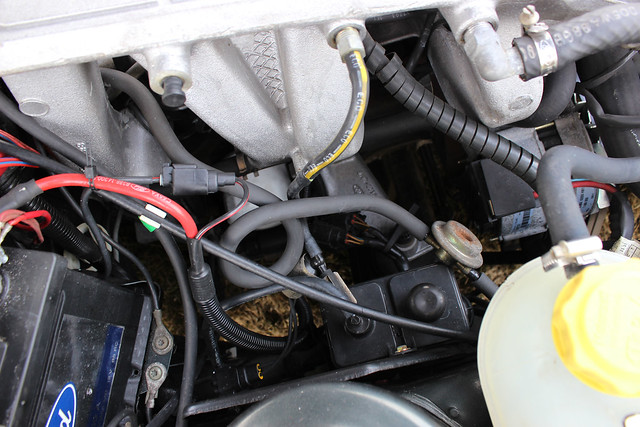