Cellos88GT said:
I hate the Olympics, it's become such colonialist bullshit.
Click to expand...

The Commonwealth Games is colonialist bullshit. And the Francophone Games and the Lusophony Games. (Which isn't to say don't let them at it - though I'm happy we're not in the Commonwealth any more)

How are the Olympics - with practically every country in the world competing - colonialist?

Just seen the video from Annemiek van Vleuten. Not gonna link it, what the fuck. Didn't even expect better ...
M

I've never seen so many accidents in so little time in the Olympics... That broken leg was just horrific.

The Olympic committee handling of their "copyrighted sport footage" gives Formula One Management a run for its money as far as being heartless dictators. There are people on youtube not even saying the Olympics name in fear of being hit with a copyright strike.

The NFL is no better, with everyone outside from official sponsors calling it "the big game."

While it is true that with his time does not compare well to the other swimmers at the olympics, I think this should be put into perspective.
In 1908 Habte would have won the Gold medal and set a new world record with his time.

I myself have been going swimming once or twice a week for a couple of years and I can assure everyone that there are not many amateur swimmers out there who can beat his time. I certainly cannot and would trail him more than 10 seconds - on a very good day (hey, I?m close to 40 -anything under 2 Minutes is fast in my world). I would really love to see the people who mock him now trying to beat his time. Yes, watching him swim looks slow even compared to the other two swimmers (that aren?t close to the top times either) - but 1:04 for the 100 Meters is anything but slow in the reality of normal people.
Last edited: Aug 12, 2016

Kim Rhode is now the first ever woman to take the podium in six straight Olympics. Yet you probably haven't heard of her or about her achievement; big-name sponsors want nothing to do with her; mainstream media hasn't mentioned her.

Why? Because guns are icky. 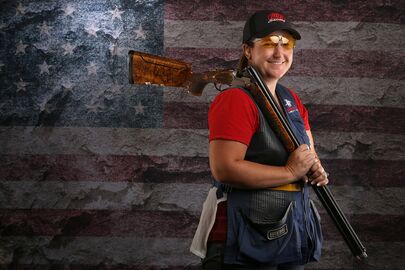 LeVeL said:
Kim Rhode is now the first ever woman to take the podium in six straight Olympics. Yet you probably haven't heard of her or about her achievement; big-name sponsors want nothing to do with her; mainstream media hasn't mentioned her.

I saw a piece on CNN about her just this week. Not sure if Cnn is no longer mainstream media or not ... but even over here in guns are extra-icky europe, she is getting some screen-time.

There are lots of sports at the olympics that draw no crowd and are basically invisible on Tv and other media. The (quite frankly) boring shooting and archery are probably one of those that are the worse off in that aspect. But I recon not because of "guns are evil" but because it?s just not a spectator sport ...
M

Juan Martin Del Potro was so close to Tennis gold, and in his wake he left legends such as Novak Djokovic (current #1) and Rafael Nadal (#5 at the moment but former #1), finally Andy Murray punched his ticket, but it was good effort.

For non tennis people this would have been like Krillin winning the martial arts tournament after defeating Goku, Vegeta and barely losing to Gohan in the final.

LeVeL said:
Why? Because guns are boring.
Click to expand...

This'll be a long night quite exciting so far.
C

Just got back from Rio, where I went to see my cousin compete in the Men's T12 Marathon. He came home 6th, which makes us very proud, in very testing conditions. Temperature was around 30+ ? C, humidity between 70 and 90 %.

It's a unique experience and I would do it again any day, even though it costed me more than a month's pay.