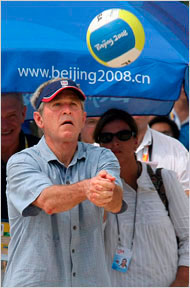 Nereid said:
A PR event is one way of putting it, but what you have to remember is that China as a whole is quite nationalistic as a country, and calling it a PR event is suggesting that Beijing is only hosting the Olympics to promote tourism. Think of it as a national celebration, apparently over 4000 people were so excited as to call their children "Olympic Games".
Click to expand...

The PR is not to promote turism, but to promote China. They're a very rapidly growing economy right now which is said will outgrow the US soon and far surpass it, so China may become the new economic power of the world. So yeah, naturally they want to turn heads and to turn people's attention to China, promoting its values, its culture ... etc. They're doing this for power & influence over the world, be it political, cultural, economical, military ... everybody's looking at China right now, so their task is to change people's views of China. Most people have archaic notions as to what China's all about. They all think "oh, poor communists" but at the same time, some of its economical centres are building some of the tallest skyscrapers in the world. Their companies are booming on the world market ... and as was seen, they have the dedication and the power to outdo G8 nations in putting on a show for the Olympic Games.

Just before phelps won they showed george Bush in the crowd. He was holding the american flag backwards and waving it.

i know! but she's so cute, especially when she lets that yell out beforehand.

so did anyone else watch the dream-team beat china?

avanti said:
so did anyone else watch the dream-team beat china?
Click to expand...

Yes, but they're calling it the "Redeem Team"... I hope we're not setting ourselves up for another fall.

Turns out it was Japan vs. Nigeria and America vs. The Netherlands, unlike what I said initially. We were squaring off against the Orangemen, it turns out. Take that, Adu.

Honed from ingots of pure WIN.

We had to take the high-speed train from Beijing's brand new Sir Norman Foster-designed railway station to Tianjin which was 40 min away, then ride a taxi for half an hour to the stadium. The train was a knock-off of the Japanese, down to the paintjob and goofy toilets, but it did go 243kph without falling apart, so there.

The stadium. Packed with people, of course.

The Japanese fans were out in droves. Which was fortunate because almost nobody cheered for them except themselves. Chinese people still aren't really big fans of them.

The Japanese section didn't stop singing and cheering the ENTIRE game. You think they would have stopped to take a breather during the boring parts, or during the times when they were losing (which was almost the entire game), but no, those guys must have been doing Red Bull shots because they didn't let up once. I bet they're still cheering on the plane ride home right now.

Halfway through the game, the Nigerian delegation FINALLY showed up. They made up for it by running around the stadium for a good half hour and being incredibly loud, getting most of the support of the Japanese-hating audience.

My first photo with my crappy Sony Cyber-Shot that kept threatening to run out of batteries. All the way on 3x digital zoom...

This wasn't working. So just for shits n' giggles, I pointed the crappy point-and-shoot lens into the eyepiece of the ex-Soviet military binoculars that my father's friend had brought along...

Surprisingly enough, it worked! And thus BinocularCam? was born.

What, flat women and pale imitations of wings?

America should've been able to hold off the dutch. It'll be really maddening if this keeps us out of the elimination stages.

EDIT: Maybe if the Japanese were all named Honda, the Nigerians were playing against...wait for it...A TEAM OF ASIMO ROBOTS!

thanks for the update! keep it coming

I hope it is okay if I recreate the posts from the other Thread:


otispunkmeyer said:
well what a day.... the 400IM for phelps earlier on was a given, no one was gonna touch him on that. but today, his 8 medal dream was in the balance.

the American 4x100m free B-team did a sterling job, breaking the WR and getting the US to the final.

i was literally dancing round the living room shouting at the TV during the final. i did not want the french to win! I could not believe what i was seeing when Lezak reeled the frenchman Alain Bernard back in in the last 5m, pipping him to the touch. absolutely unreal... phelps at the end, roaring like a lion, i bet he was relieved.

poor Aussies, after the last olympics where the US told them they'd get smashed like guitars only to have the Aussies wind up on top, i knew the US wouldnt let that happen again. i have to give it to the them though, i thought Phelps lead off 100 was immense at 47.5 matching the WR, but Eamon Sullivan absolutely smashed that with 47.2 in the lane next them, just stunning!

i feel sorry for Katie Hoff atm, i think the media really wound up the hype on her, claiming 6 gold medals.... she got done big time in the womens 400IM buy the australian girl and despite leading 399m of the 400M free.... my favourite british swimmer, Rebecca Adlington wound it up and got her on the touch, with the very pretty (for a swimmer, lots of them are pig ugly) Jo Jackson not far behind in third.

hoff went off like a shot around the 200-250m mark, and she had to really, to try put the english girls out of contention, but i could see Jo and Becky were spurring each other on, they were looking at each other at one point, and they reeled Hoff back in.

Again i just could not believe what happened...proper exciting stuff, i was out of my chair for that one too!

i have high hopes for her in the 800M and Liam Tancock, providing he doesnt go mental at the start, has a wicked chance in the 100m back (though Aaron Piersol looks exceptional mind)


EDIT just checked the splits for the 4x100m free, mens

all pretty fast, but check out Lezak's last leg split.... 46.06.... thats fucking biblical! i bet if he didnt have the luxury of the rolling start he'd of smashed the WR into pieces, a rolling start certainly isnt worth over a second!

Polly said:
Sadly you have to take those kind of performances with a whole fucking bag of salt these days.
Click to expand...

vikiradTG2007 said:
Let's keep the discussions about the Olympics here.(edit by Elvis313: this thread)
Click to expand...

Elvis313 said:
Polly:"Sadly you have to take those kind of performances with a whole fucking bag of salt these days."
True, sadly. The commentator here pointed out that those incredibe boosts of performance can hardly be explained; he was very careful in what he said, though.
There are new WRs at the olympics everytime and nobody really dares to ask how that might be possible
Click to expand...

Jacobfox said:
Well if you're in the top 4, you're immediately tested and vetted. I gotta say, great swim by lezak, fastest ever 100m relay leg by a country mile. If they kept records for relay legs, he would've shattered the old one by more than a half second. I did notice that whoever the frenchman swimming leg three was, he did a great job to distance himself from the Americans. The catch-up that followed will be remembered for a long time, especially if Phelps does what everyone believes he can do.

What did you think of the japanese bloke that WR'd in the 100 breast final? Seems to me like a damn good swim. And you have to love these polyurethane suits for bringing these records down. Sure makes it entertaining.
Click to expand...

Elvis313 said:
Jacobfox: "Well if you're in the top 4, you're immediately tested and vetted."


First, I don't think everything can be detected. And second, even with random tests during training, you can never be completely sure that the athlete didn't take something in the months or years before. Especially the ones that didn't take part in International challenges before (china anyone?)
Click to expand...

Suedschleife said:
So far my favorite is still the 1984 games, go Albatross. Sad to say I just don't enjoy watching televised Sports anymore unless they are endurance racing.
Click to expand...

well these new Speedo LZR suits apparently are good for 2% increase in speed.

and well, the old WR 3.12 ish to the new 3.08 is about 4% right? so the americans have a 2% increase from the suits (its all phsycological anyway IMO) and 2% from their physical improvement... not so hard to comprehend i dont think. i doubt any of them will of used steriods. i also have no doubt in my mind that lezak was fuelled completely on adrenalin...the onus was on him to ensure phelps' dream didnt crumble and he delivered big time, the pressure was on and he didnt just step up to the plate....he destroyed it. he almost went 45....thats just crazy

Kitajima in the 100m breast , faffin amazing, under 59 for the first time.... astonishing. the BBC have moorehouse as a commentator (gold in 84 in the same event...britains last gold until today with rebecca and still the only man to win olympic gold for the uk for 20 years) and he was practically speechless.

otispunkmeyer said:
i doubt any of them will of used steriods.
Click to expand...

Well, this is very off-topic and I apologise for that.
But what's the deal with the "of" in that context?
I read that quite often in the last days.
Is it correct english, some kind of internet slang or just colloquial speech?

Dude, way cool photo! Vignetting is OK if it's mechanical.

Elvis313 said:
Well, this is very off-topic and I apologise for that.
But what's the deal with the "of" in that context?
I read that quite often in the last days.
Is it correct english, some kind of internet slang or just colloquial speech?
Click to expand...

im not sure, i guess the correct word would be have

were i live most people will say it just like that.

i think actually its a shortening and changing of have.... it goes to "av" and because of our accent here it comes out as "ov" and the closest word to that for type is "of".

phonetically i would say

"shouldn-ov" dropping the t from shouldn't and completely castrating "have"

<OT cont.>The problem is few people bother to learn how to use contractions (such as would've) properly anymore.</OT>

It is interesting that there are really two competitions going on here. The U.S. has focused on swimming and track&field. China has focused on things like weight lifting, table tennis, archery, etc (high gold metal total sports). They are not really competing against each other in sports, the only competition is the gold metal count which the Chinese seem more obsessed with. Their focus has been on sports where the gold metal potential is high.

The Chinese are winning Golds at events that the U.S. barely competes in. I took a look at the 2004 Olympics metal count for the events that Chinese have won golds in and I found that the U.S. didn't win any golds (silve, or bronze) in those events then either.

This gold metal fervor is really useless for comparisons.

Should I point out that the Netherlands are very very good at Football? I would expect that the USA will loose that one.