prizrak said:
That still won't be stopped by a rear facing camera, really the only thing it would do is make it easy to prove that the person behind you was an idiot.
Click to expand...

Where did I say anything about a camera, or even comment directly about one? 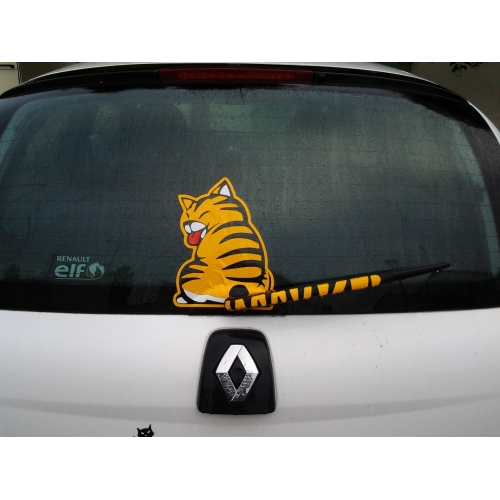 There are are colors of cat too.

I like those but can’t believe that someone would stick one of those on and block their rear view...

Matt2000 said:
I like those but can’t believe that someone would stick one of those on and block their rear view...
Click to expand...

Yeah, it's cute but I bet it gets old/annoying fast.

Been a good long while since I've seen a good Russian dashcam compilation. All the videos have been pretty mediocre lately. But one finally came up in my suggested videos feed this morning and its gold. As good as they were 7 years ago at the height of their popularity. Some repeats, and some American police videos mixed in, but the vast majority is good ole' Russian insanity.

GRtak said:
Where did I say anything about a camera, or even comment directly about one?
Click to expand...

The entire discussion was about CrzRsn wanting a rear facing camera because of stupidity of the driver in the Jeep...

And I still maintain that even in an accident where you're rear-ended and it seems clear cut who's fault it is, having video footage can alleviate some of the headache of arguing with my/her insurance companies regarding deductibles and compensation.

Or who knows, she could claim something false like I brake checked her or cut her off or something. Sure my front facing camera will debunk those claims, but one that shows that she's texting non-stop will be especially helpful to the police in that case.

I know I posted about this in the Jeep Gladiator thread, but I can't get over how damn good the Jeep J6 concept looks. If Jeep ever decides to build these, which is based on the Wrangler Unlimited chassis btw, I would absolutely buy one. Save this post and shame me later if I do not.

TC said:
I know I posted about this in the Jeep Gladiator thread, but I can't get over how damn good the Jeep J6 concept looks. If Jeep ever decides to build these, which is based on the Wrangler Unlimited chassis btw, I would absolutely buy one. Save this post and shame me later if I do not.

Didn't they make a very similar JK based pickup as one of their Easter concepts several years ago?

CrzRsn said:
Didn't they make a very similar JK based pickup as one of their Easter concepts several years ago?
Click to expand...

I don't recall. I know they've made some amazing concepts over the years, but now that the Gladiator was green-lit, it seems more realistic that a regular cap pickup might make it into legitimate production. I can only hope anyway.

prizrak said:
The entire discussion was about CrzRsn wanting a rear facing camera because of stupidity of the driver in the Jeep...
Click to expand...

My comment was in direct.response to Flare's insurance comment. But I disagree with you. In the following insurance and potential lawsuit headaches, it would be invaluable evidence. Plus it may lead to charges against the driver on the phone.

Slice of car modification life:
Install team day 1:
Remove factory steering...
3 hours to pop one tie rod ball joint.
15 minutes to pop the other one and unbolt everything else.
Except the steering box won't drop out the bottom like it's supposed to because some idiot mounted a giant set of side pipe headers, and it won't come out the top because the whole rest of the steering system is attached to the pitman arm.
The power steering control dingleberry attaches to the end of the pitman arm with a ball joint, but you aren't really intended to remove it in-car because you're highly likely to damage it if you try getting it off with a pickle fork. Fuck it, try anyway.
30 minutes later, nope, better go get a pitman arm puller and the giant socket.
Go to the store, buy a 3/4 drive ratchet, socket, and the bigger of the two pitman arm pullers on the shelf.
Wind off the pitman arm nut.
Install the puller.
Shatter the puller.
Go back to the store and return the puller. Buy the smaller one.
The smaller one doesn't fit.
Reassess situation.
Bend some things for better access - it's all going in the trash anyway.
Get it off with the pickle fork.
Steering box doesn't fit out the TOP with the pitman arm attached because some idiot mounted a giant Wilwood master cylinder.
Remove alternator.
Bolt on conversion brackets. Discover inadequate fastener supply. Stores are closed. Deal with it later.
10 hours total time.

Weekday evenings solo:
Mock install steering rack and column connection. Discover clearance problems with sidepipe headers. Guess it's time to bash them up (they were formerly bashed in to clear the 1950s steering box so whatever)
Unbolt headers.
Discover guys who installed headers last welded the sidepipe to the header, making a single giant 8foot long exhaust that is nigh impossible to get out.
Remove clutch linkage because it's in the way of removing the headers.
Get it out eventually.
Grind off welds.
Uninstall, hit with a hammer and reinstall header 38347347378723478 times until it clears.
Total time about 16 hours spread over 2 weeks

Install team day 2:
Finish installing, torque and loctite conversion bracket bolts.
Install rack, minding U-joint phasing and steering/wheel center.
Have a disagreement about whether the U-joints are properly phased. I say it's 2 teeth out. He says it's dead on.
Feel steering. It's got hard spots from binding.
Use all available adjustment. Binding doesn't go away.
Reinstall rack, minding phasing again.
Have another disagreement about U-joint phasing. I say it's 1 tooth out. He says it's dead on.
Use all available adjustment. Binding doesn't go away.
Reinstall rack, minding phasing again. This time, it's definitely dead on.
Use all available adjustment. Binding doesn't go away.
Loosen steering column in cabin, slide it all the way back to the extreme of its adjustment.
Steering feel is WAY worse now, even though the U-joints look like they're almost ideally configured now.
Mess with adjustment. Binding goes away entirely. There are still some very light hard spots, but they aren't in time with the U-joints, so it must just be tough spots in the new rack. In fact, steering back and forth over them makes them decrease in severity. Must just be wearing in the rack. GM Kwalitee!
Read instructions. Next step "clean power steering pump IF YOU DO NOT DO THIS YOU WILL VOID YOUR WARRANTY"
Check the 21-page receipt from the professional engine swap to see if they did anything with the pump.
No. The original 1981 power steering pump is still in there and utterly unmolested. Damnit.
Best pull it out.
A reman pump is all of $35 so may as well just change it instead of fooling around trying to clean the insides of a pump without dismantling it.
Power steering pump doesn't fit out the bottom. Alternator belt needs to come off to get it out the top.
Undo alternator adjustment to slip the belt off.
Discover alternator cannot be adjusted to be loose to get belt off pulley enough because hi-rise valve covers. Gotta remove alternator.
Discover alternator is mixed SAE and metric threads ON THE SAME PART. Jesus Christ GM.
Finally get power steering pump out.
Put header back in to check to make sure the properly-aligned steering column clears the headers.
NOPE.
6 hours total time.

That's as far as we've gotten so far. He's going to beat on the pipes some more and we'll resume in 2 weeks time. 32 hours into the 6 hour nominal time.

TODO that we know of is:
So probably gonna be at least 50 hours by my estimation, probably 4 full-scale work days.

"Tools that lack subtlety" was hard to write on the label.

Blind_Io said:
"Tools that lack subtlety" was hard to write on the label.
Click to expand...

That's entirely too funny, I didn't even realize there was a label when I commented...

Cross posting for visibility but a few of us are having a mini meetup at NYIAS on Saturday the 20th. If anyone else is interested here’s the thread

(Apologies for Tapatalk link - it should just open in your browser)

I have just concluded spending a significant part of the last four days in the junkyard pulling parts for a fellow FG member.

I can now confidently say that the Mitsubishi Mighty Max is the absolute worst designed vehicle I have had the displeasure of working on in the past ten or so years.

I wonder how long it will be until "Save the manuals" morphs into "Save the transmissions", what with all these new all electric vehicles coming out.

I remember so many discussions about how much better all these fancy twin clutch gear boxes are compared to manual transmissions, because of their speed and efficiency, but these new electric cars are direct drive. Constant uninterrupted power delivery. For the same reasons that a twin clutch is better than a stick, these direct drive EV's are better than a twin clutch. I imagine it won't be long before fans of these gearboxes are making the exact same arguments that the "Save the manual" crowd have been making for quite a few years now. You know, "driving involvement" and all that.