Having a staycation this week and taking kids some places.
So far:
Shattered my Apple Watch at an aquarium - don’t know how
Drowned my phone at a water park
If my iPad gets pwnt I’m going all Android this cuz this gotta be a sign

Replacement watch came yesterday, replacement phone was acquired today (went to the store). AppleCare+ is really worth the money

Random pet peeve, people talking to the screen of their smart phone when dictating/on speaker instead of to where the microphone is.

Ugh. That's a pet peeve of mine as well. Or when teenage girls have headphones with built-in microphones in them, and then talk to the phone instead of that microphone piece.

Similarly, people who are holding their phones infront of them talking on speakerphone while driving a car that definitely has bluetooth.

Anyone who makes a phonecall on speaker!

bone said:
Anyone who makes a phonecall on speaker!
Click to expand...

Just start joining in on the conversation. It cures them of that habit quickly.

CrzRsn said:
Similarly, people who are holding their phones infront of them talking on speakerphone while driving a car that definitely has bluetooth.
Click to expand...

If that doesn’t scream “I’m technically illiterate” I don’t know what does.

Also, these people are obviously aware that holding the phone to your ear is frowned upon, but speakerphone in front of your face (phone in hand) is somehow less illegal?

Perc said:
If that doesn’t scream “I’m technically illiterate” I don’t know what does.
Click to expand...

In the same vein, from today: Turning off your car's parking sensors because "I don't like the beeping and I can't be bothered to learn why it's beeping or understand the on-dash display" then today doing this. 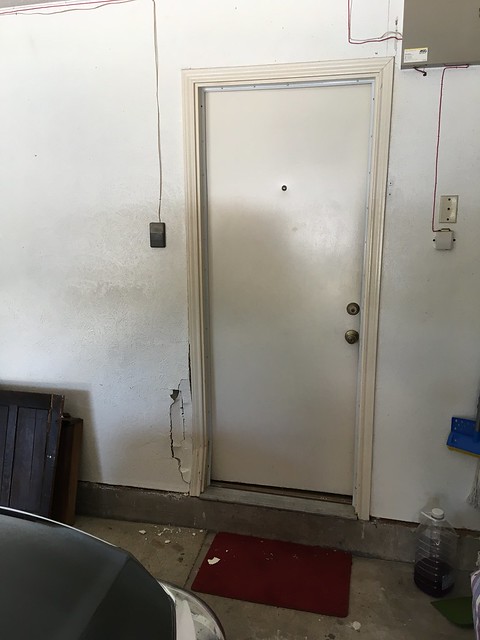 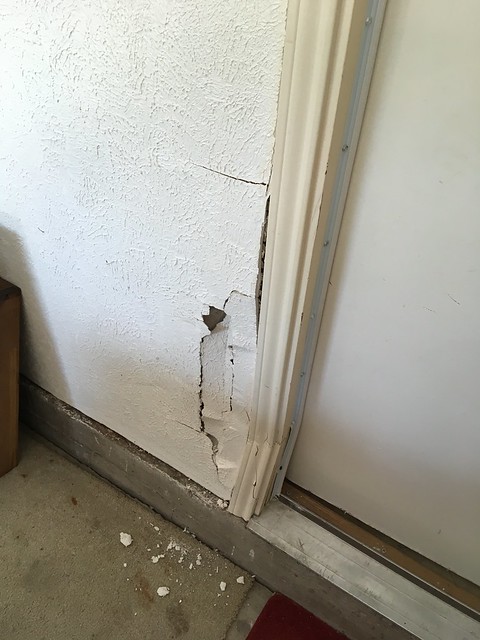 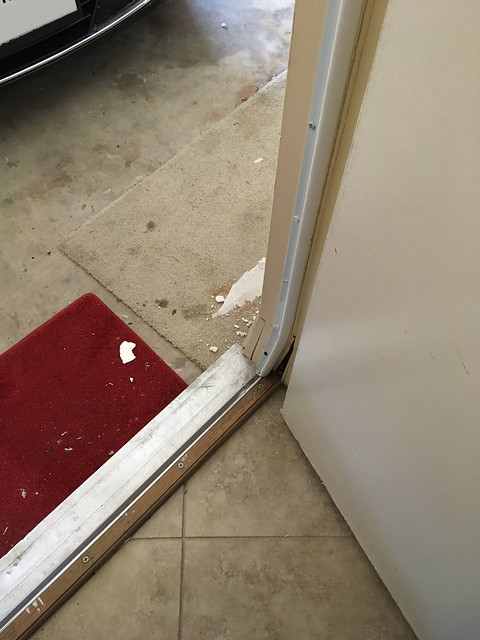 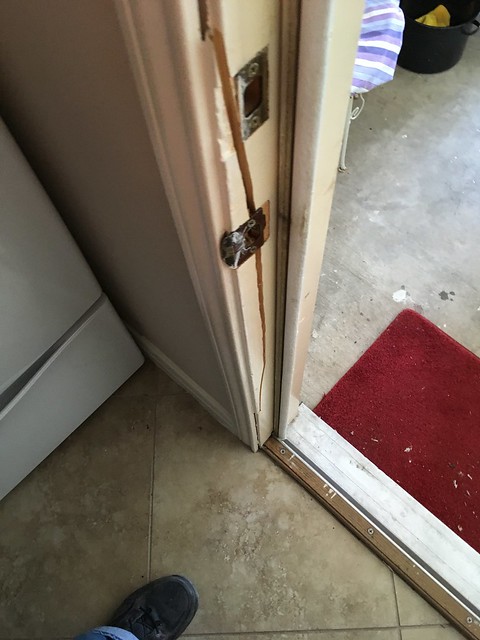 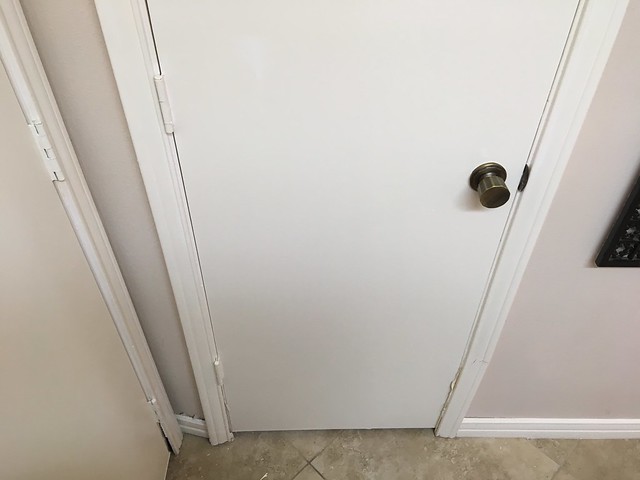 Not my car, but I was asked to come out to break open/down the now no-longer opening door as well as the closet door behind it. The driver caused thousands of dollars worth of damage to their house because (among other reasons) they couldn't be arsed to understand their 2014 Genesis Sedan's very simple parking sensor system. The entire entryway including half the closet (the door in the last picture) is going to have to be ripped out and reconstructed.

Perc said:
Also, these people are obviously aware that holding the phone to your ear is frowned upon, but speakerphone in front of your face (phone in hand) is somehow less illegal?
Click to expand...

In NY holding the phone for any reason while driving (even if stopped at a light) gets you a nice big ticket. Though you can text to your hearts content as long as it’s on a mount.

Spectre said:
I can't be bothered to learn why it's beeping
Click to expand...

My neighbor drives a Levante and has the hardest time getting into his spot with the cameras and parking sensors. I get both my cars into same sized spots (sadly one is right next to him) with none of that tech. This tech is basically lost on these people...

I’ve been parking with and relying on rear sensors since 2012. Last year I reversed into a metal cabinet because the bastard started beeping right before the hit instead of at the usual distance. Right in front of the entrance at a busy supermarket, too.

A metal corner at a 45 degree angle exactly in the middle between two sensors threw the depth perception off, I guess.

The Skoda's rear sensors were way better and more precise than the ones on my Opel. On the other hand, the Opel has better rain sensing wipers.

So this is a story all about how my life got flipped, turned upside down... when my AIO cooler started to leak!

Rewind to the 26th July, one day before I'm due to leave for S2 Smarts and then the Swisstaly roadtrip. It's quite late and I'm just watching some Youtube videos, when suddenly the PC shuts off. As soon as it does I notice a smell, then see liquid on the top of my 1080Ti card, dripping from the Deepcool AIO cooler. Once the thing is powered off I can assess the leak and the damage.

You can see the green drip forming here from the tube on the left side of the pump. 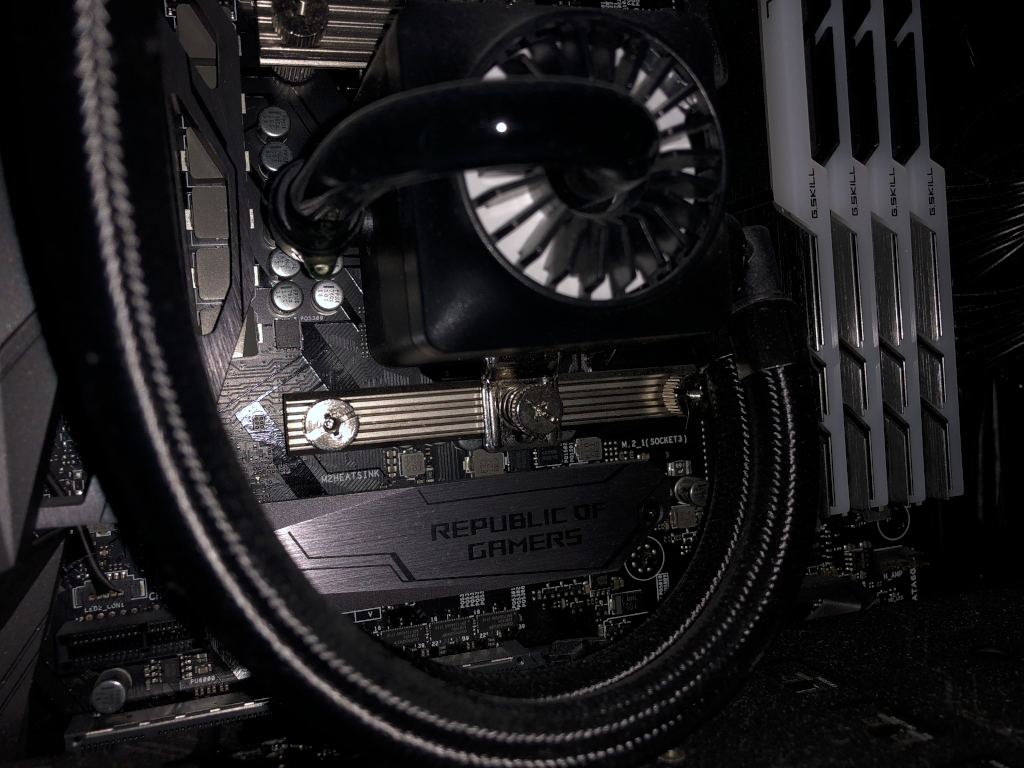 Liquid on the SSD. 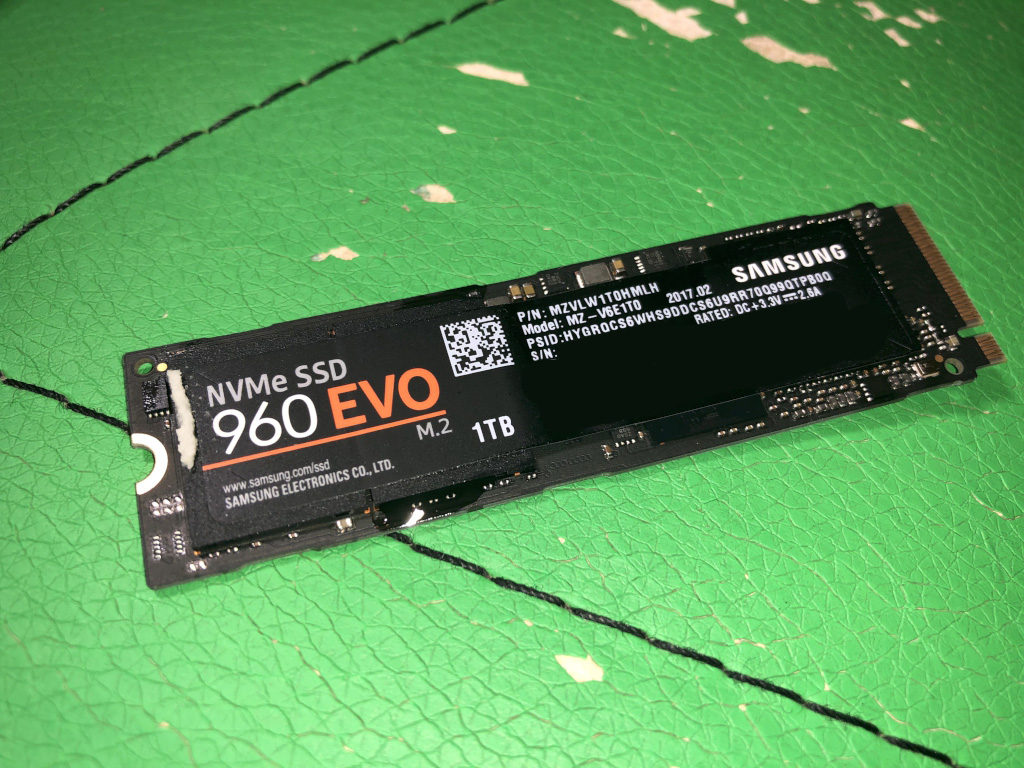 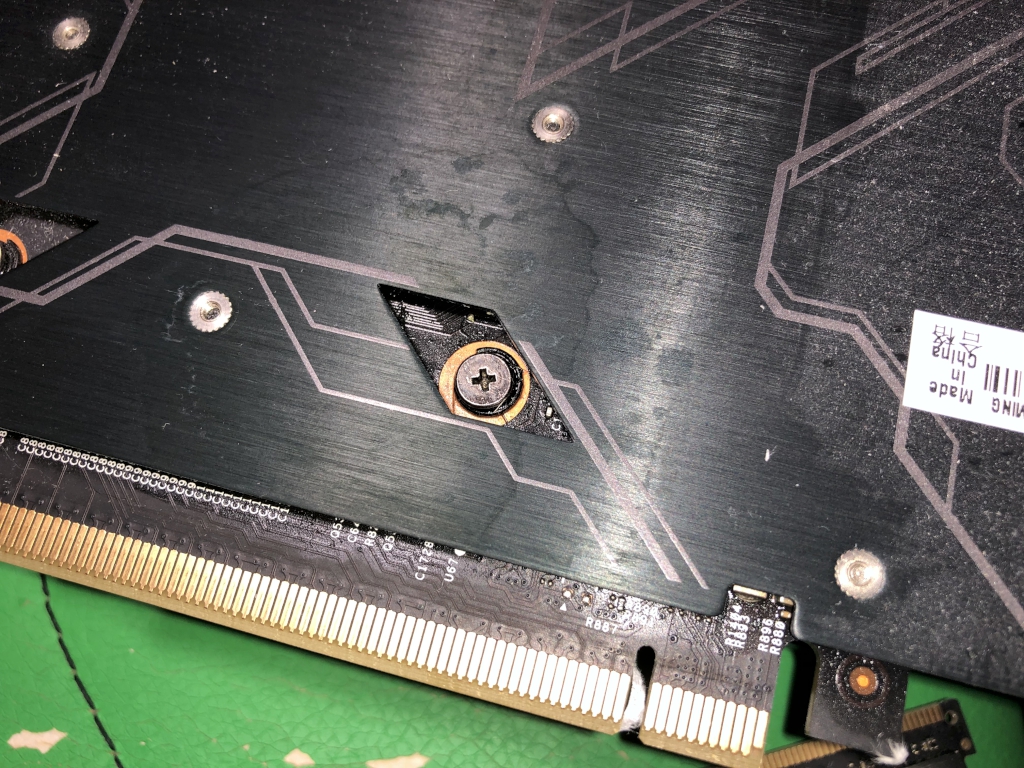 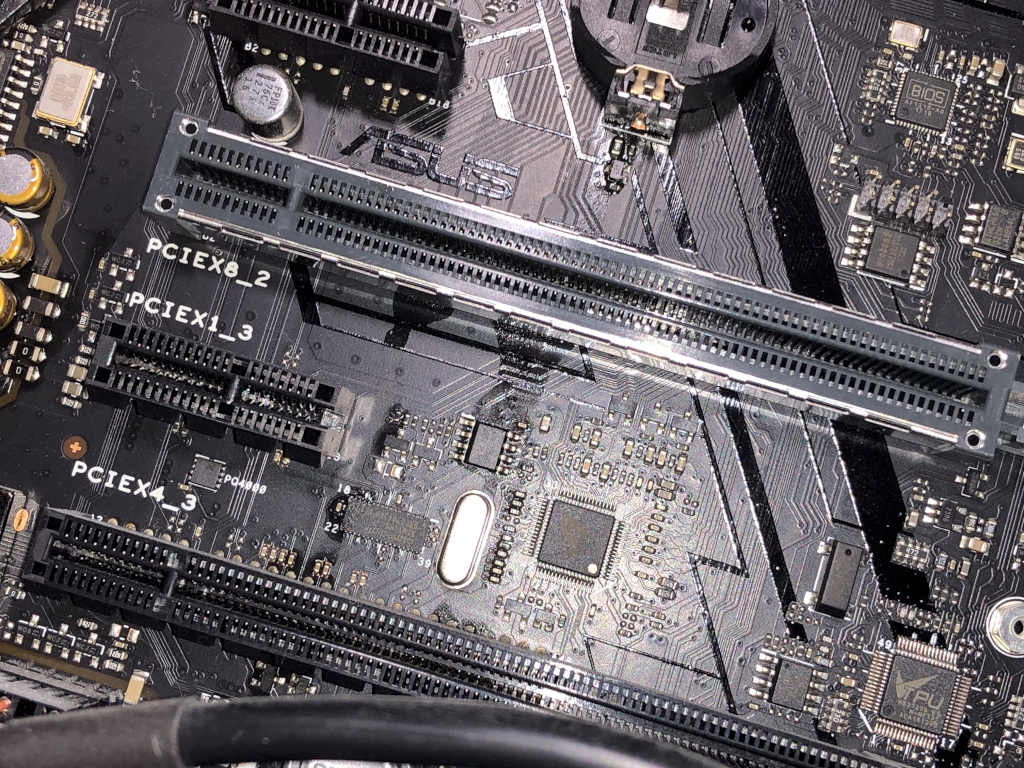 I threw on the air cooler from my server, which fortunately fits the newer socket CPU and tested things out. The SSD didn't work in the main M.2 slot and the GPU wasn't working at all. Shit. I didn't have time to deal with it, so left it all apart and went roadtripping.

When I got back, I reassembled everything and started it up. To my surprise, it was all working again as it should. Two weeks of sitting allowed the components to fully dry out. I reported the fault to Deepcool, they offered to replace the cooler and any components that were actually damaged. They also assured me that there would be no long term damage from the coolant.

As everything was working and anything deemed damaged would need to be sent to China for testing, I just went with the new cooler. For the same price as my original Captain 240EX RGB, you could get the Captain 240 PRO. This has anti-leak technology (a pressure relief valve) so this leaking must be a common issue that they have learnt from. They gave me a 100% discount code to buy the thing from Amazon and it arrived the next day. 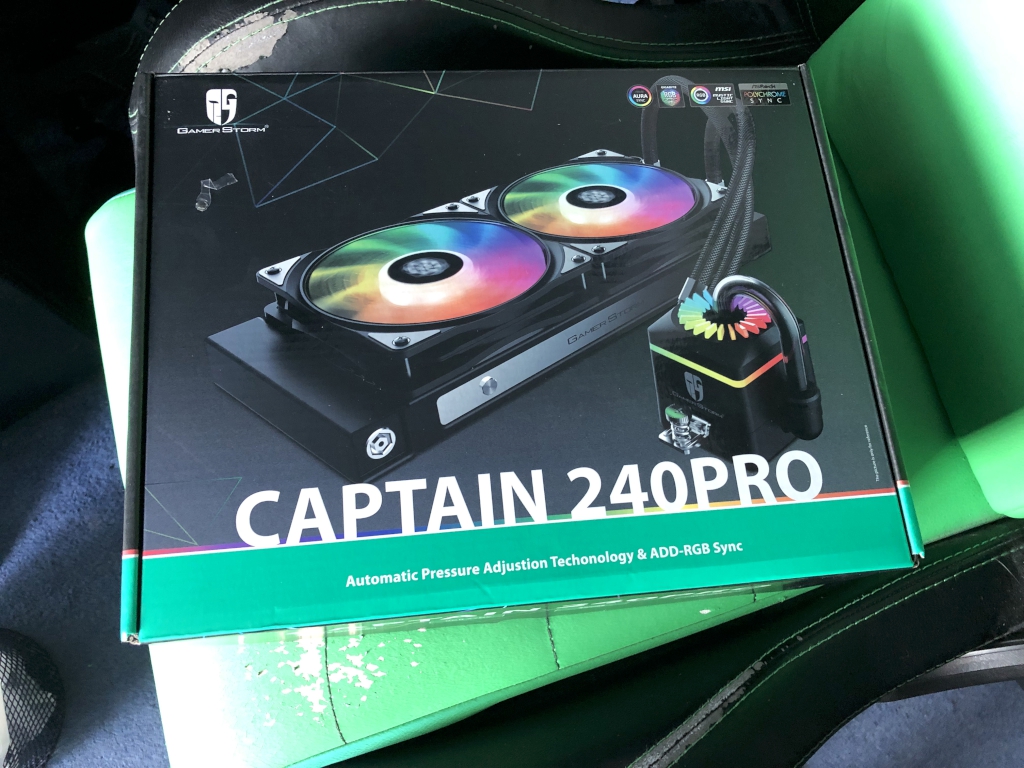 It fitted easily, with the only snag being the different RGB connectors they have used on this. After cleaning up the coolant spots with IPA and anti-static brushes, all was back to normal. The RGB on this new pump is much brighter than the old one, which just lit behind the fins. 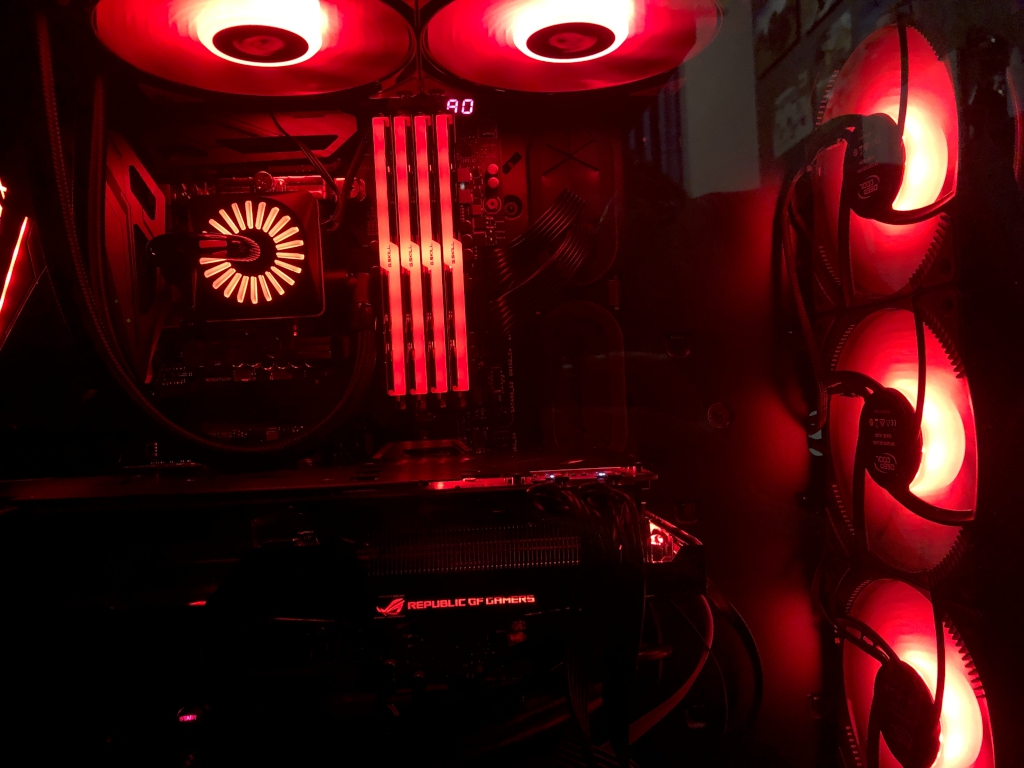 This also gave me the opportunity to fit my new 2TB SSD that I picked up in the Prime Day sales, it had originally gone on the roadtrip with me as video storage, now it stores 448GB of those and all of my videos from the last year. It's stuck with VHB tape as I don't have a third quick release bay and there isn't actually space for one. 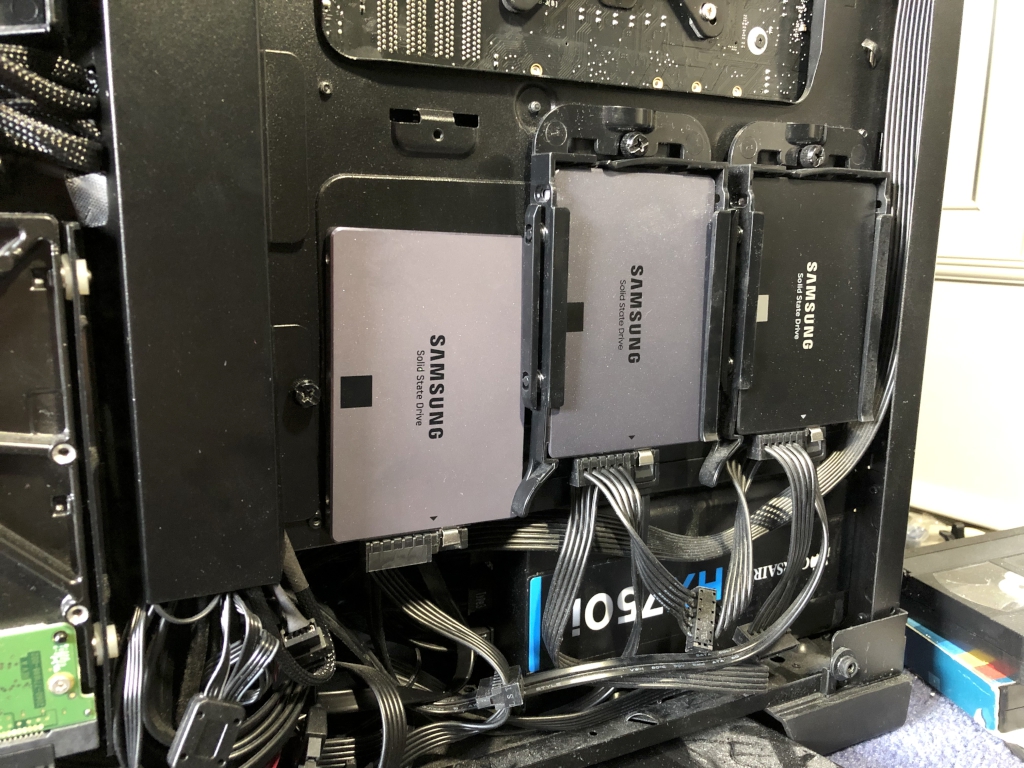 So, a lucky escape I think. If you have an AIO cooler, keep an eye on it and listen for any strange noises.
Last edited: Aug 19, 2019

Back when I purchased my lovely new Bose QC25s, I said I needed a long-haul flight or two to try them out...

As luck would have it, I managed to get some cheap last minute flights to Ringmeet this year! So the 14 hours from Australia to Abu Dhabi and 7 hours from there to Frankfurt, were the perfect test.

Extremely happy with my purchase! Took spare batteries just in case, and only had to change once - though I had been using them at home before that, so the battery wasn't new.

Most of that tiresome droning noise, and ALL of the screaming babies were blocked out. While still uncomfortably crammed in cattle class of course, I was much more relaxed and nowhere near as tired on landing.

Just a follow up - the estimated price for ‘I don’t like beeping and I can’t be arsed to learn why so turn it off’ is now up to around $5000 and climbing as adjusters’ estimates come in.

Hey guys, I didn't know where to post this, so I'm posting it here. About a month ago, I ordered a cheap Chinese USB-C to HDMI/USB 3.0/USB-C adaptor so I could connect my phone to a TV or a monitor. I already had a really cheap USB-C to HDMI adaptor, however, that one stopped working after some time. I tested the new adaptor with my phone and my parents' TV, and guess what? It doesn't work.

Neither does the female USB-C connector on the adaptor seem to work. I tried multiple cables and HDMI ports on the TV, and all of those work fine with other devices. The adaptor's HDMI and USB-C functions are the only that don't seem to work, neither on my phone nor on my brother's laptop's USB-C port. This could be due to the fact that my phone's USB-C connector could have some dirt in it (as whenever I plug my charger, it's really loose, with USB-C headphones and other USB-C devices connecting somewhat loosely as well) and the fact that my brother's laptop doesn't support the charger, as I specifically chose the Huawei P20/Mate 10 option on the device list, even if there is MacBook Pro listed in the item's title on eBay.

I am yet to try it with my cousin's Samsung Galaxy S9+, as that one should also have HDMI-out support from its USB-C connector, but this could be a faulty product that I bought. Nothing out of ordinary if I did, and I was fully prepared that this might happen.

However, the fun part is communicating with the seller. After I received the item, the seller sent me a message that I contact them if I had any problems. Which I did. So here's my message, I believe I was as clear as possible while describing my issue:


The reply I got? Here it is, together with the scheme picture they sent me:

The heck am I supposed to connect to what? Do they even know what they're talking about? Did their original idea got lost in Google translation? Are they trying to confuse me just so they don't have to send me a new adaptor? Whatever they did...

You have to have a bit of fantasy reading these kinds of instructions.

Connect 1 to your phone.
Connect 2 to the power supply
Connect 3 to the TV

Than you should get the the phone screen shown on the TV via the HDMI. You might need to do some settings on the phone.

If you instead connect a computer to 4 you should also be able to use the HDMI output 3 to the TV.

But you can't use 4 to get an output from the phone connected to 1.