Not a bad idea!

While the headlights are out of the car, you could throw some clear Laminex or something on the lenses once they're cleared and rarely have to worry about crazing in the future. I did something similar with my car when I buffed the headlights out.
J

Holy shit those lights are ginormous.

Sanded the lights down with 800-1200-2000 wet sand paper and applied some lacquer on them. Not perfect by a long shot but a lot better than before. Easy to try again if it looks like they need to be better. 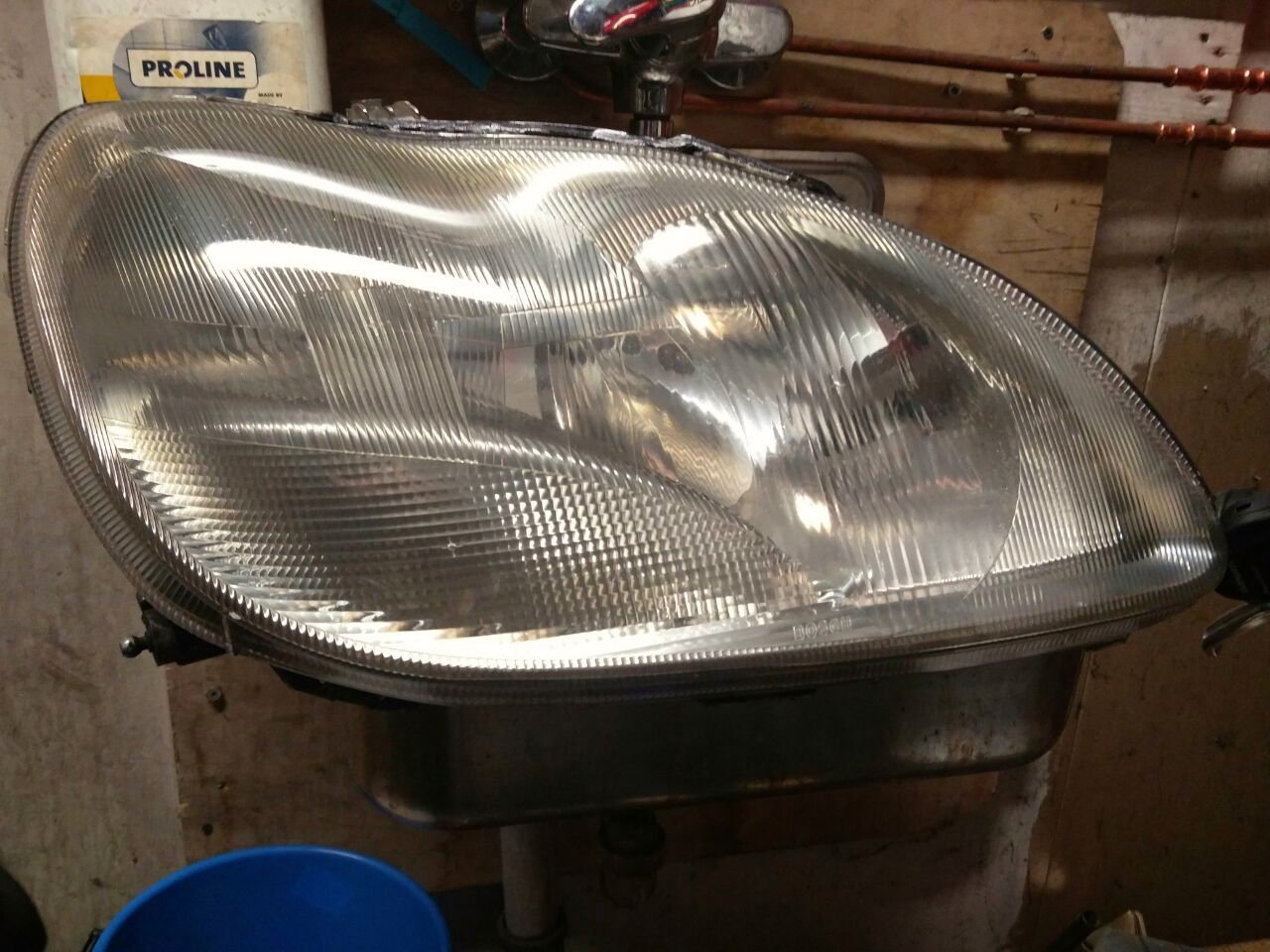 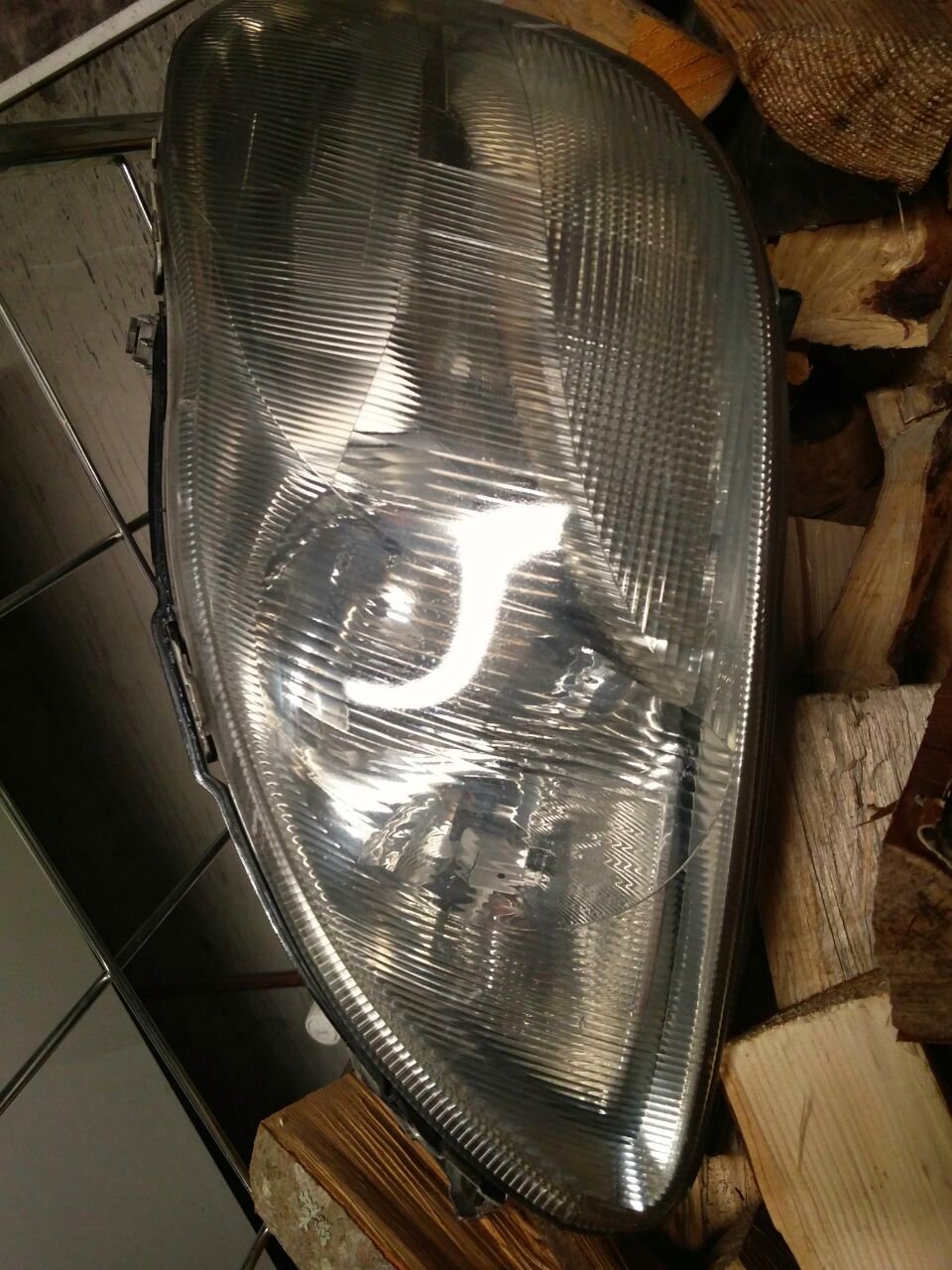 Looks great! At least they were savable, I've had some that no amount of sanding would have brought them back.

Google translate is surprisingly competent in translating from Japanese to English with photo recognition. Trust me, I've used it today a lot. :lol:
Last edited: Mar 22, 2018

Interesting, so they made an Japanese version of the manual with LHD car in the drawings. So it's not just an Euro-spec that the dealer imports and modifies to be legal, but a proper Japanese LHD version?

No euro-spec at all, completely and totally Japanese version which can be ordered either RHD or LHD right out of factory. Dunno if they've actually made two separate versions of the owner's manual, as in this one all the pics on the pages are from LHD model.

luokyio;n3547795 said:
No euro-spec at all, completely and totally Japanese version which can be ordered either RHD or LHD right out of factory. Dunno if they've actually made two separate versions of the owner's manual, as in this one all the pics on the pages are from LHD model.
Click to expand...

I did not know that. That is fantastic. Now I wonder what's the reason for that? Feeling exotic for driving a LHD car in a RHD country?

Mitchi;n3548281 said:
I did not know that. That is fantastic. Now I wonder what's the reason for that? Feeling exotic for driving a LHD car in a RHD country?
Click to expand...

Pretty much; LHD had this image of being upmarket and fancy vs. being for the masses the way that RHD did; if I remember Clarkson's Motorworld correctly, the Yakuza always drove LHD Mercedes for this reason.

Fever getting higher and higher, the car is in Portugal at the moment. In a week it should be leaving the vessel in Germany, then wait a week there until next ship picks it up and brings to Finland on 4th of May. At first I thought I'd go get it from the port myself 450 km away, but then asked for inland transportation. 200 € brings it to my town. Not really worth using two working days, hotel cost and drive 1300 km not knowing exactly the condition the car is in. Instead it is coming on a car transport truck.
Last edited: Apr 14, 2018

I cannot understand how people can order new cars with similar (or even longer) delivery times. I've already changed my mind 100 times of what should I have bought. :lol:
J

Wow, that's insanely cheap. I would've expected twice or thrice that to transport a car. What company is this?

I asked from three companies, SE Mäkinen offered the same 200 € but only to Mikkeli (100 km away), A1 Autokuljetus ~230 € to Savonlinna and Autolink 200 € to Savonlinna (which I obviously chose). I assume they always have some room in their trucks transporting new cars, so they'll be happier taking even a small price to fill all the spots than driving with empty spots.
Last edited: Apr 15, 2018

luokyio;n3548310 said:
I cannot understand how people can order new cars with similar (or even longer) delivery times. I've already changed my mind 100 times of what should I have bought. :lol:
Click to expand...

I know of a few people who do that with new factory ordered cars. They change the specs on their ordered car several times and/or sometimes even back out of the deal completely before the car is delivered. If the car gets delivered, they immediately trade it in for something else, obviously losing a lot of money in the process. I guess some people are just hooked on speccing/ordering new cars, and not actually owning or driving them. An expensive hobby for sure.

And it arrived safe and sound late Friday evening. It really felt like Christmas 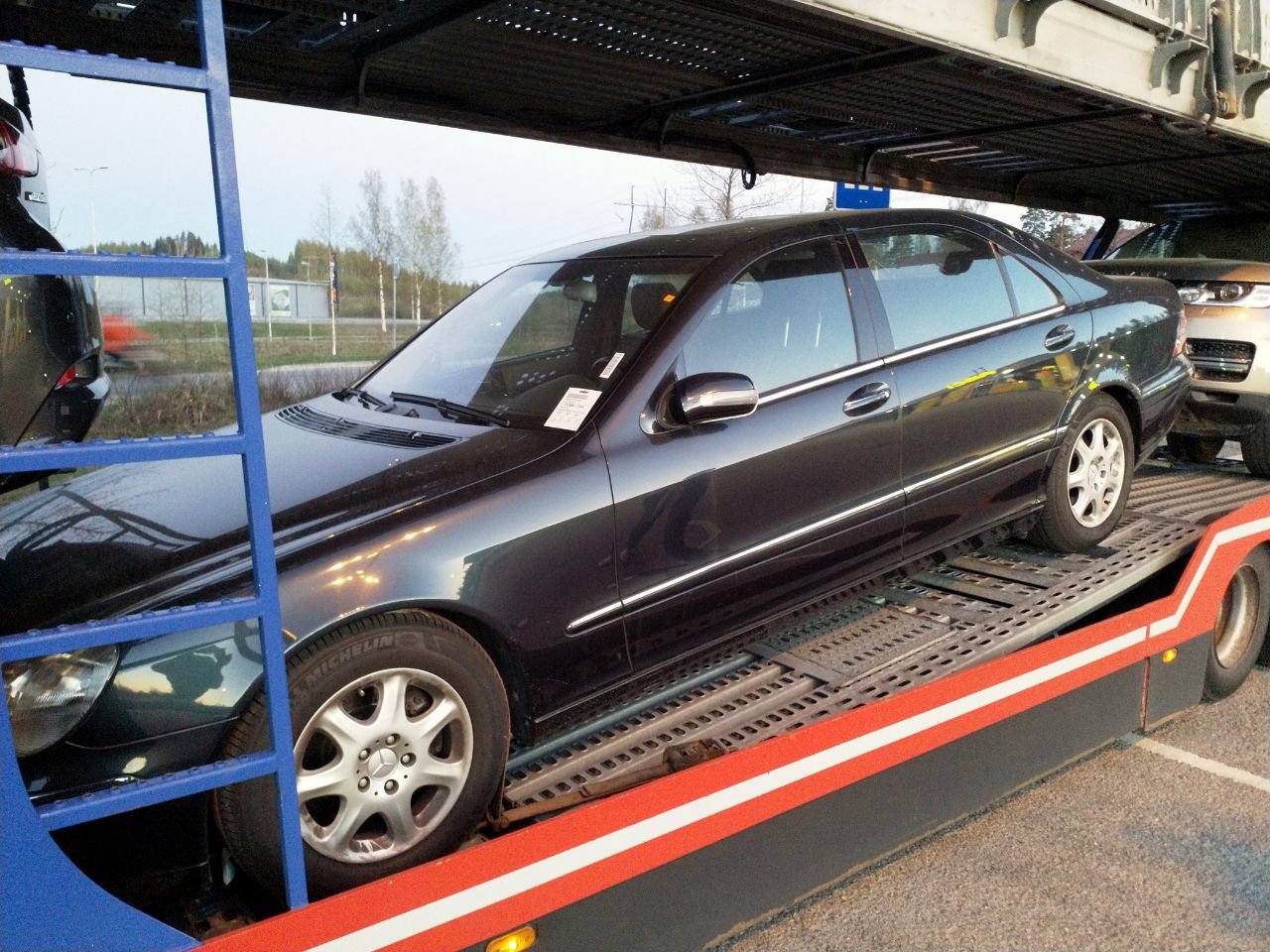 It was in good company, in the truck there were new Mercs and one Range Rover. 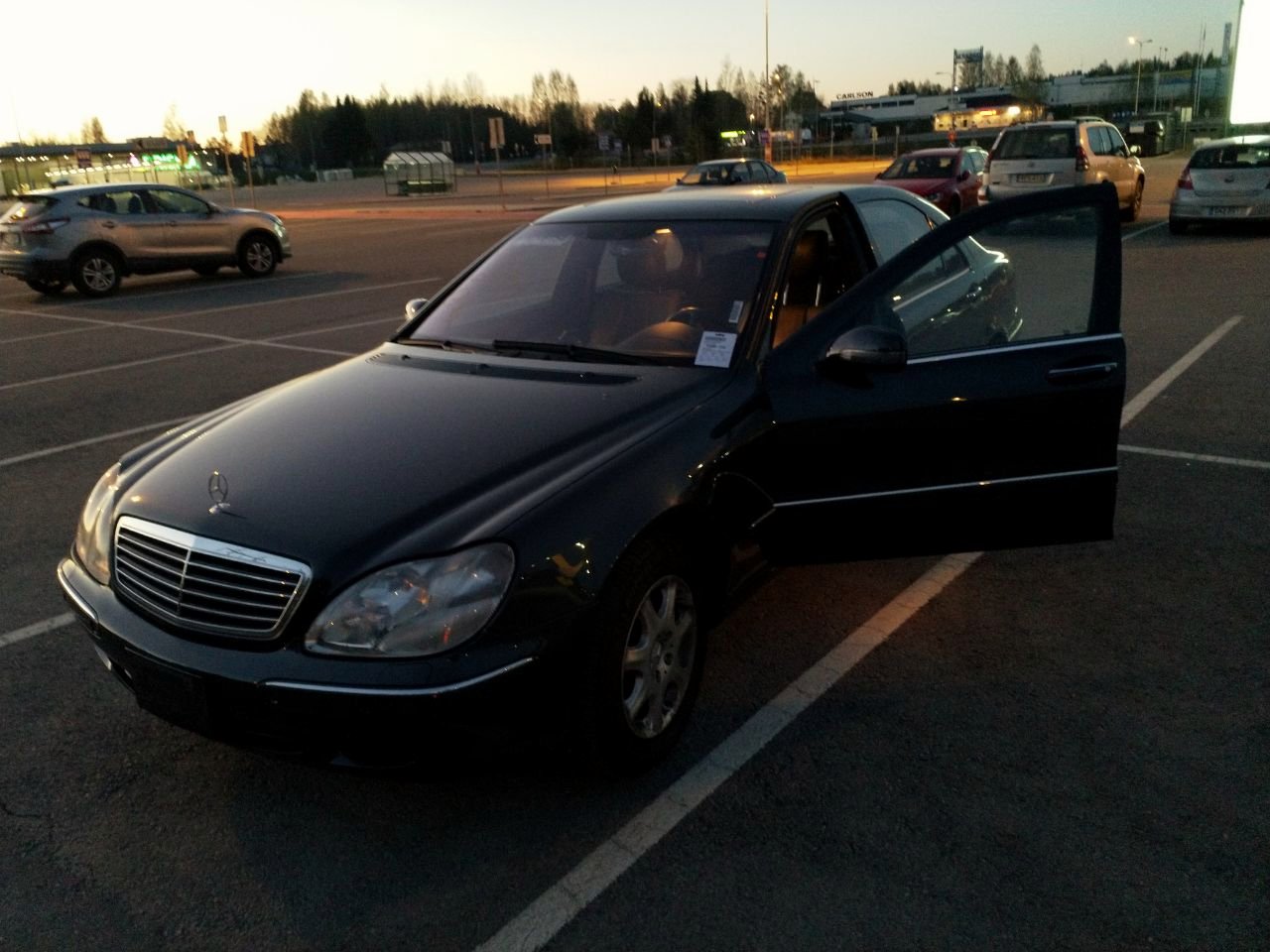 Condition is pretty much exactly what the auction sheet said. Interior is in almost as-new condition, the driver's seat is the only one that shows it has ever been sat on.

Right front wing has a nasty scratch that goes all the way to the bumper. And a dent. 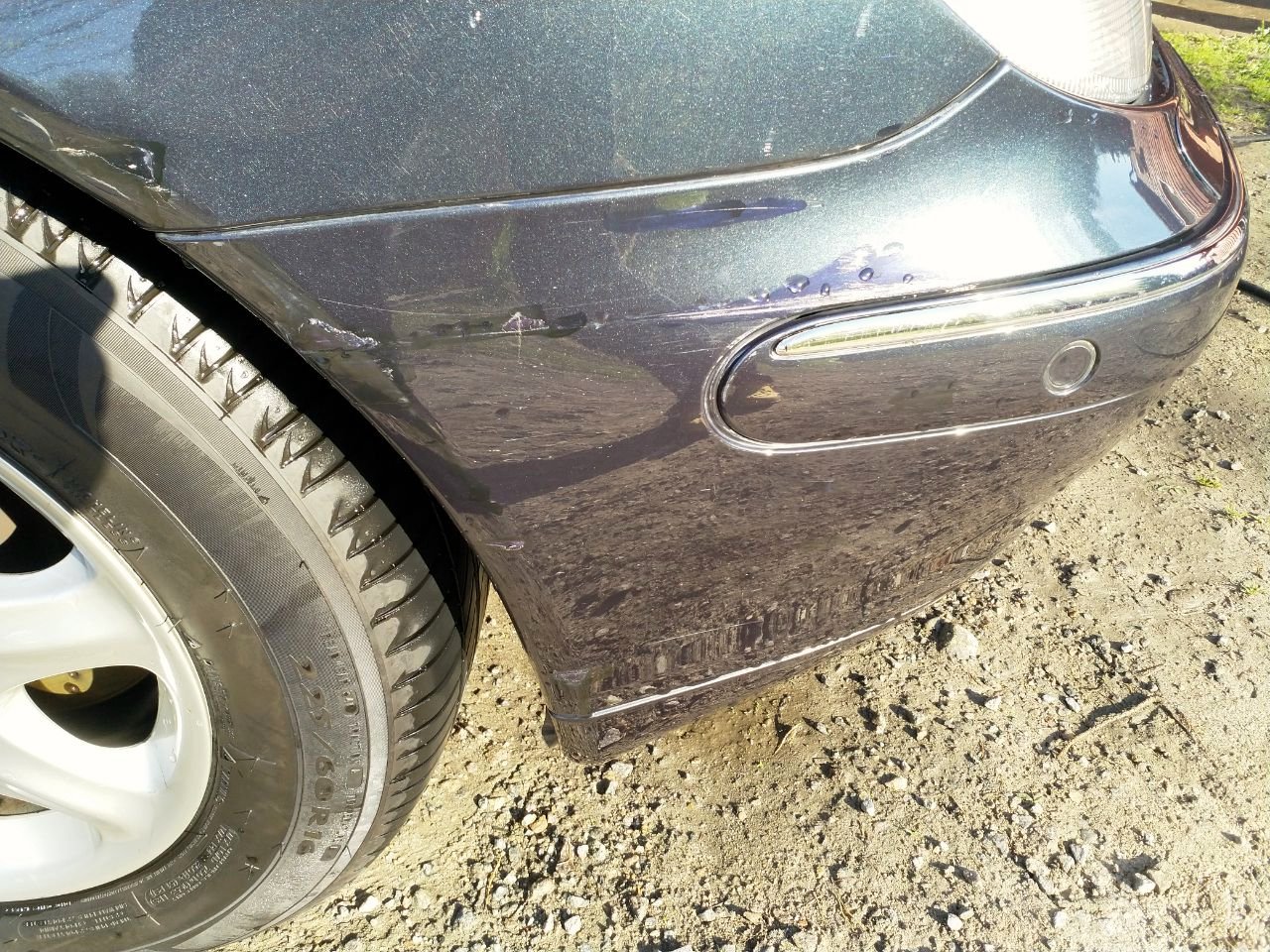 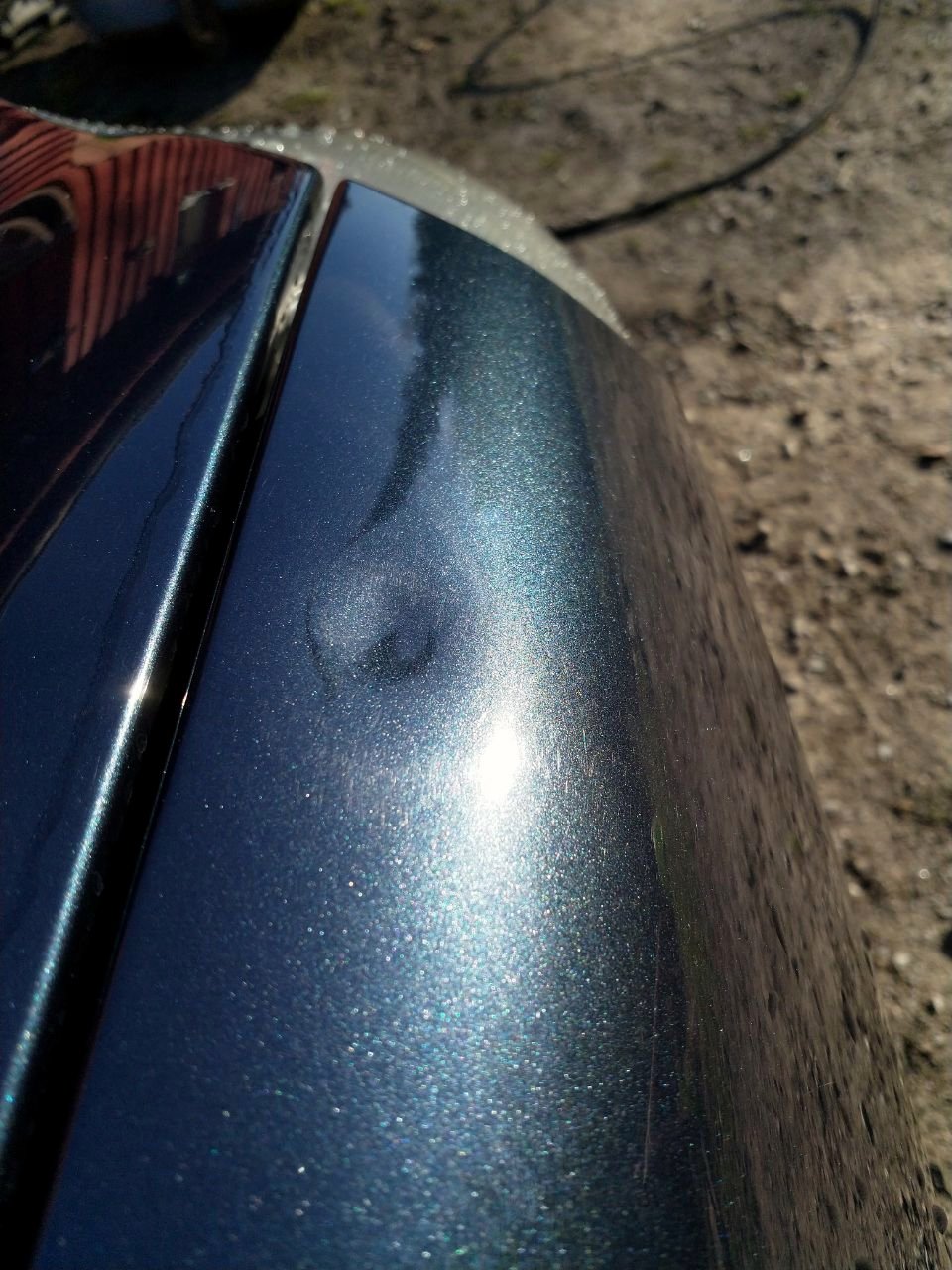 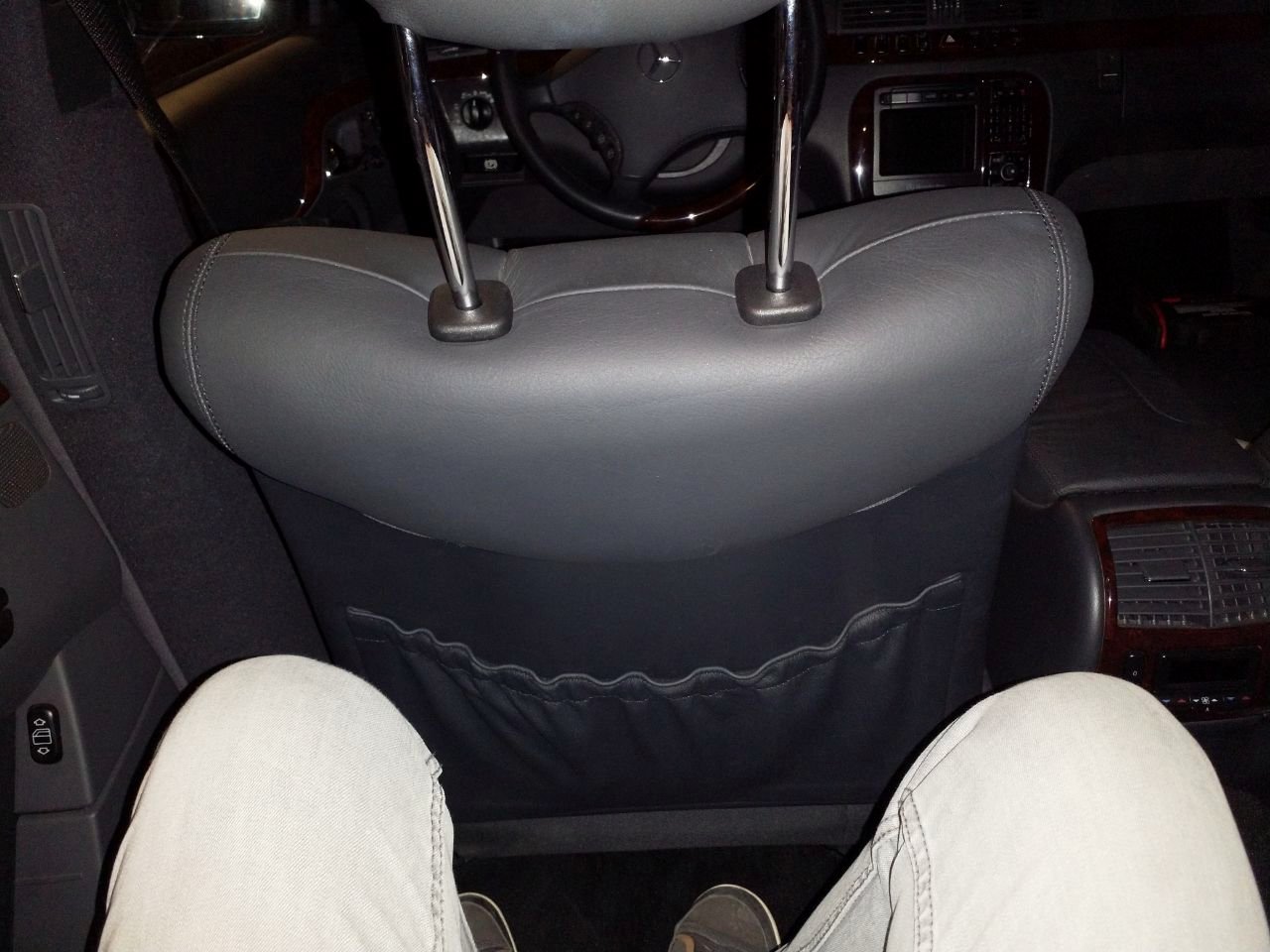 All the rubbery parts inside had sun damage, which causes them to turn into muck magnets like this: 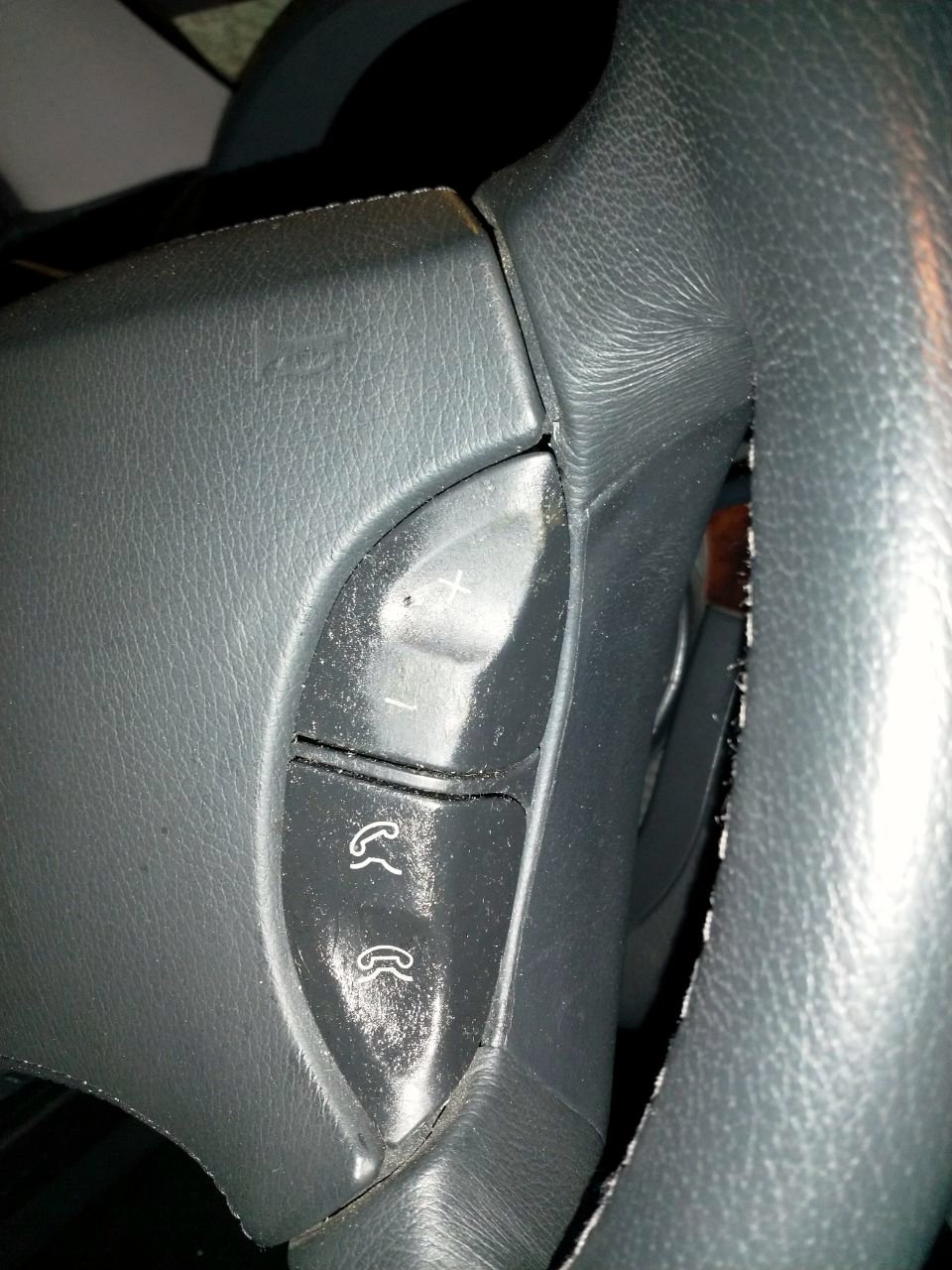 Other parts cleaned up nicely with Tar remover, but the steering wheel buttons lost their paint immediately and turned to white as I started cleaning them.
Engine was cleaner than I've ever seen on a used car, proper showroom condition. After couple of days of driving I've already gotten it dustier than when it arrived. 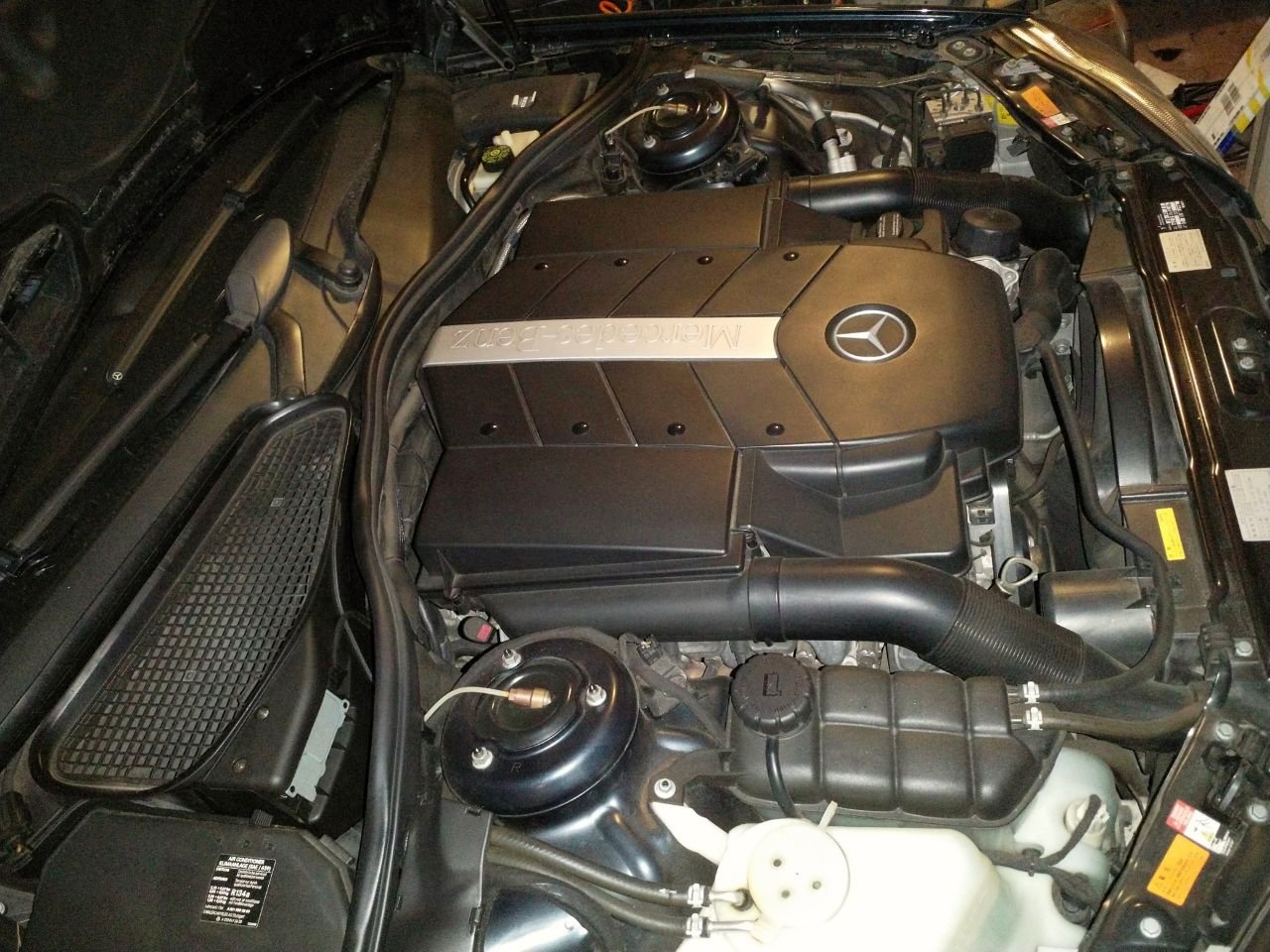 Some exterior shots on daylight after 100 km drive after washing, so a bit dirty already. 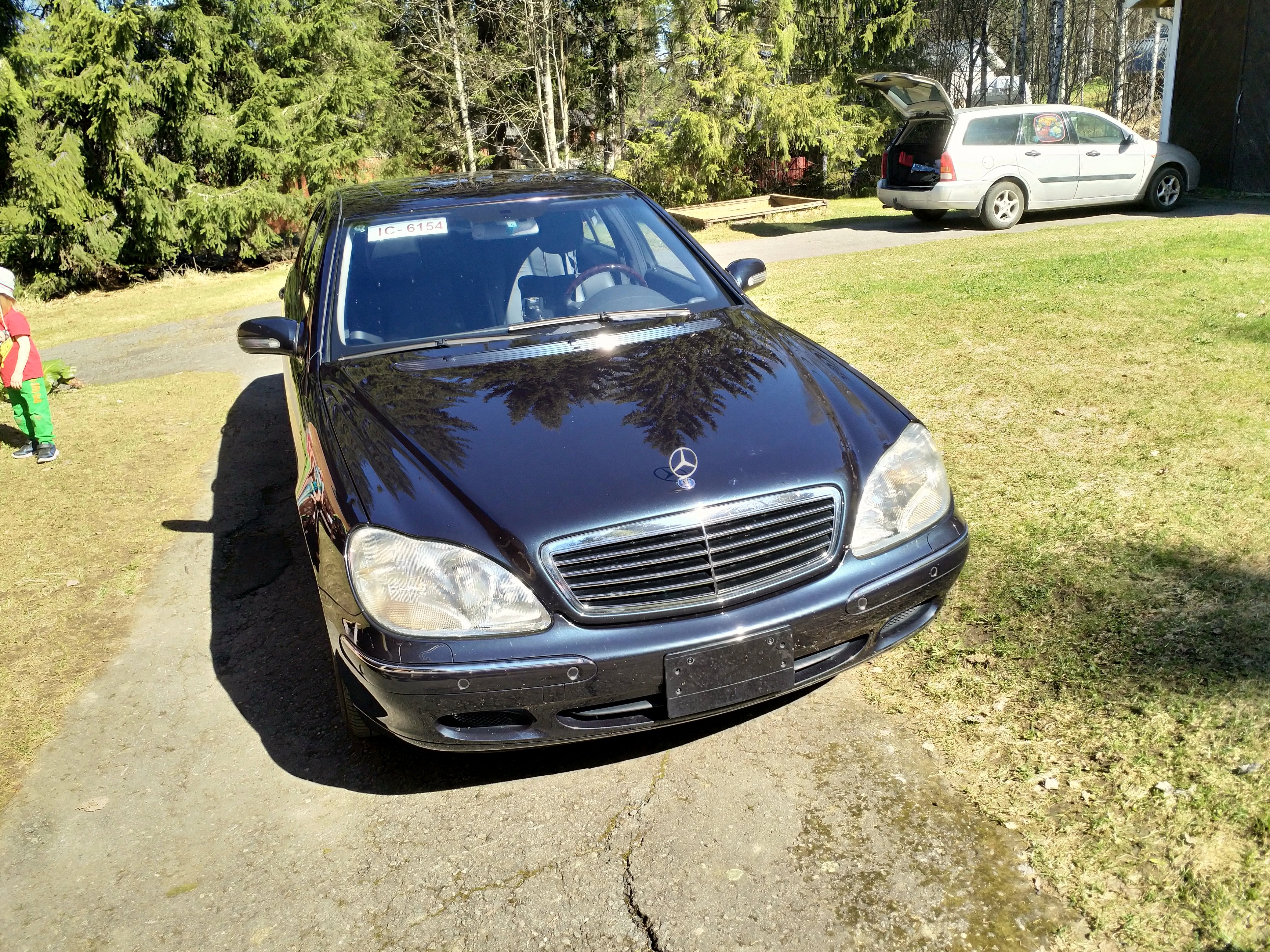 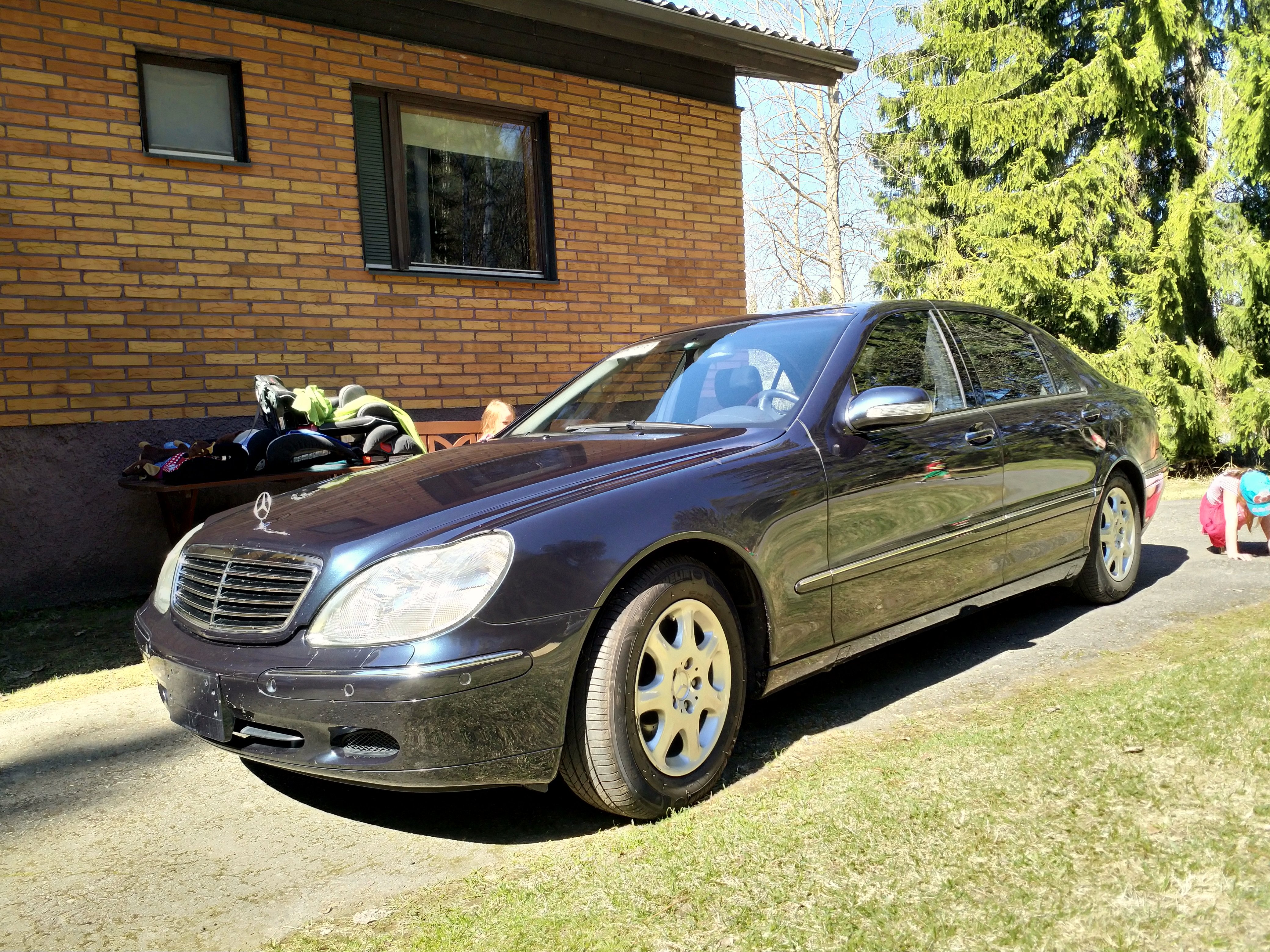 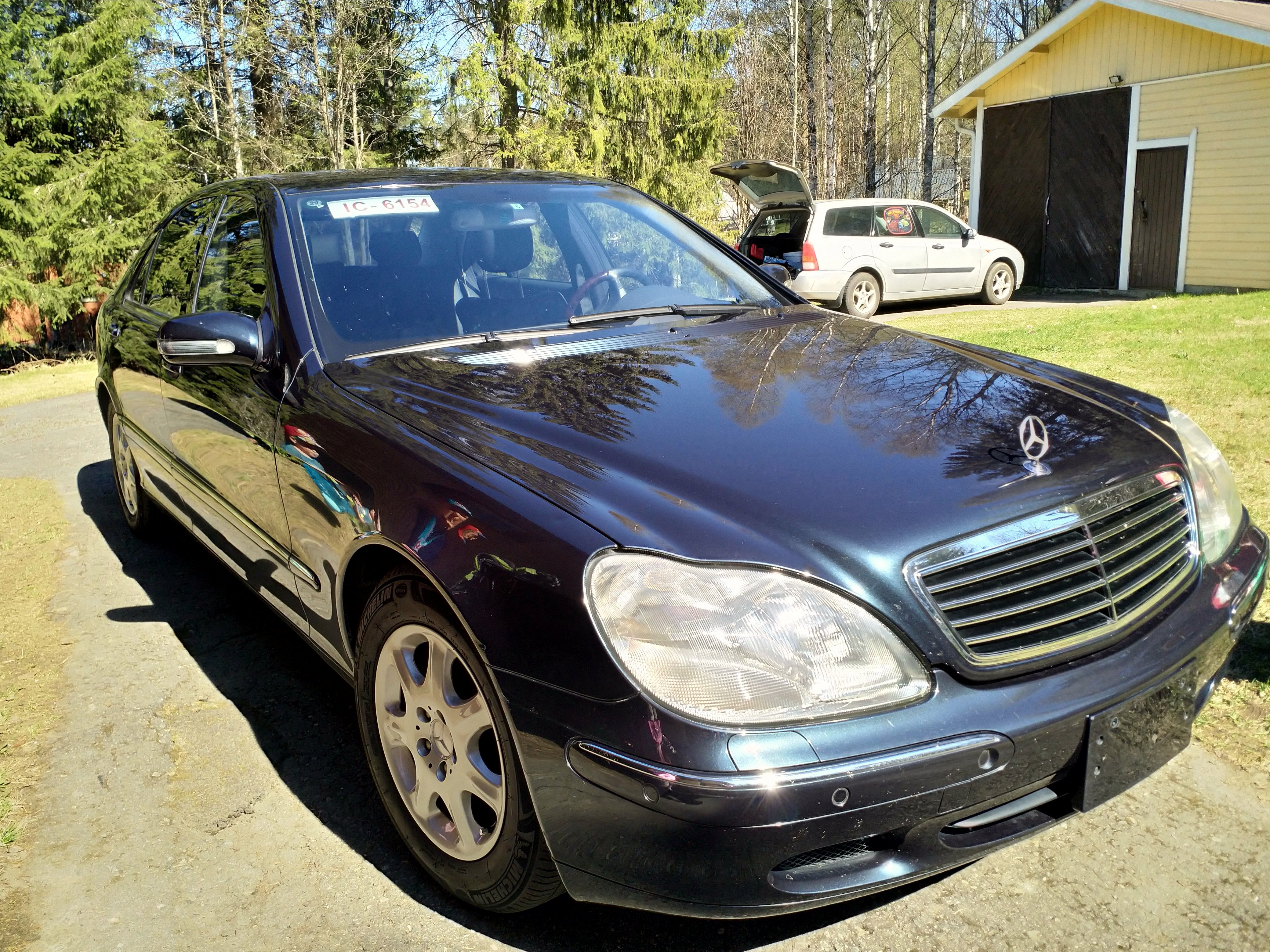 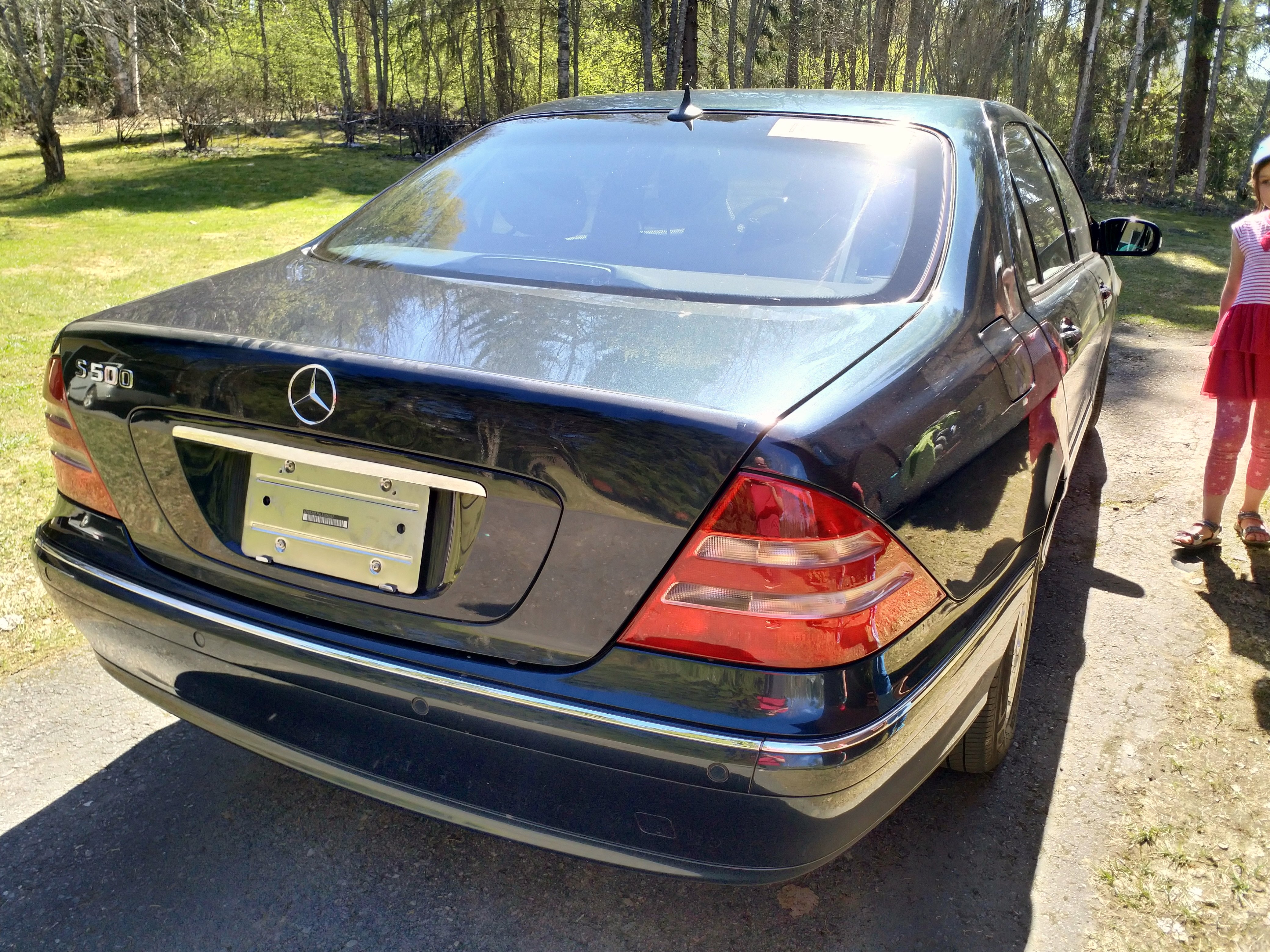 R looks really MINI van next to this, front ends on the same line: 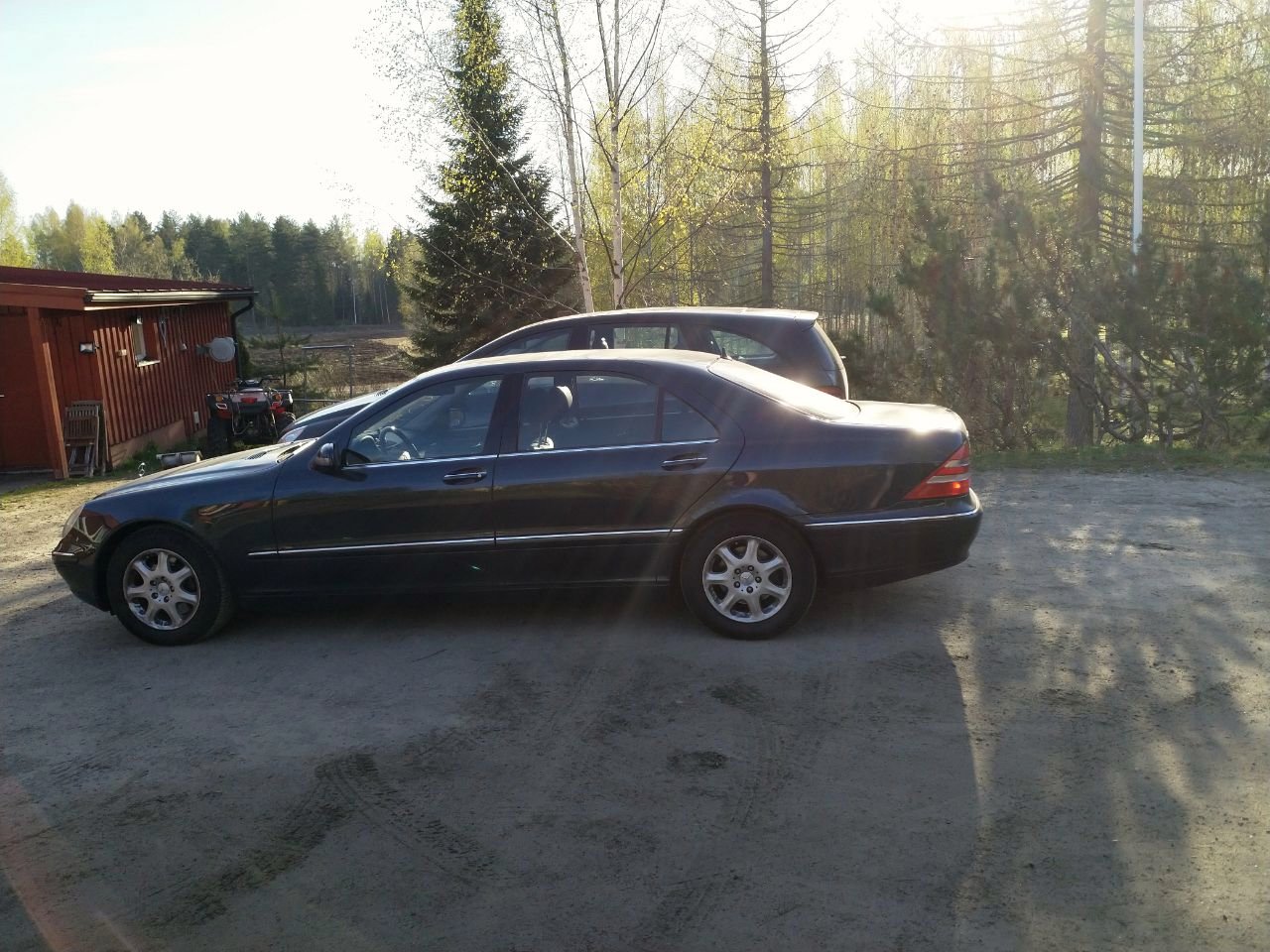 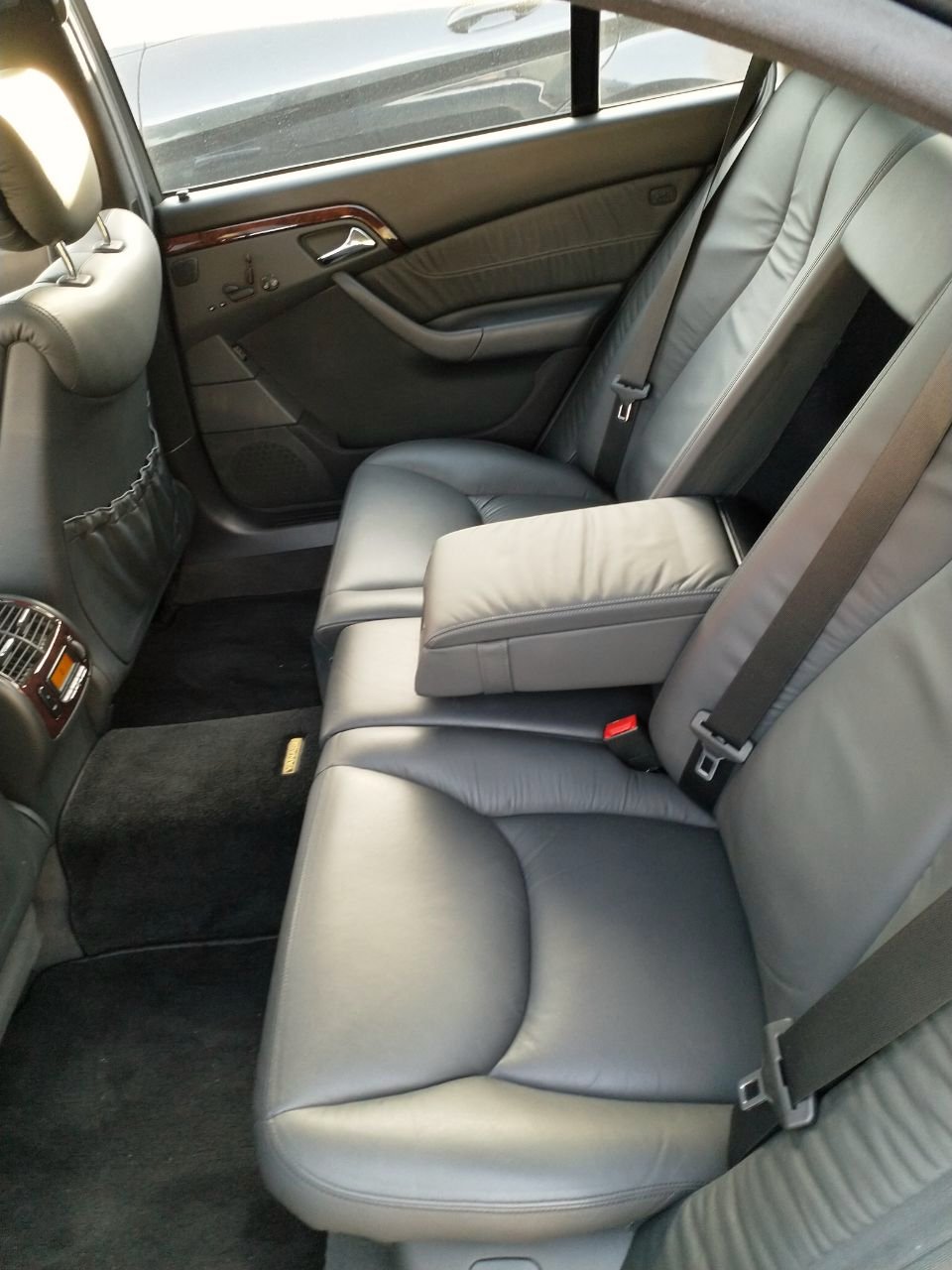 Door sills have the original new car plastics still on! Look terrible after the years but I'm torn if I should remove them or not. They've lasted 17 years. 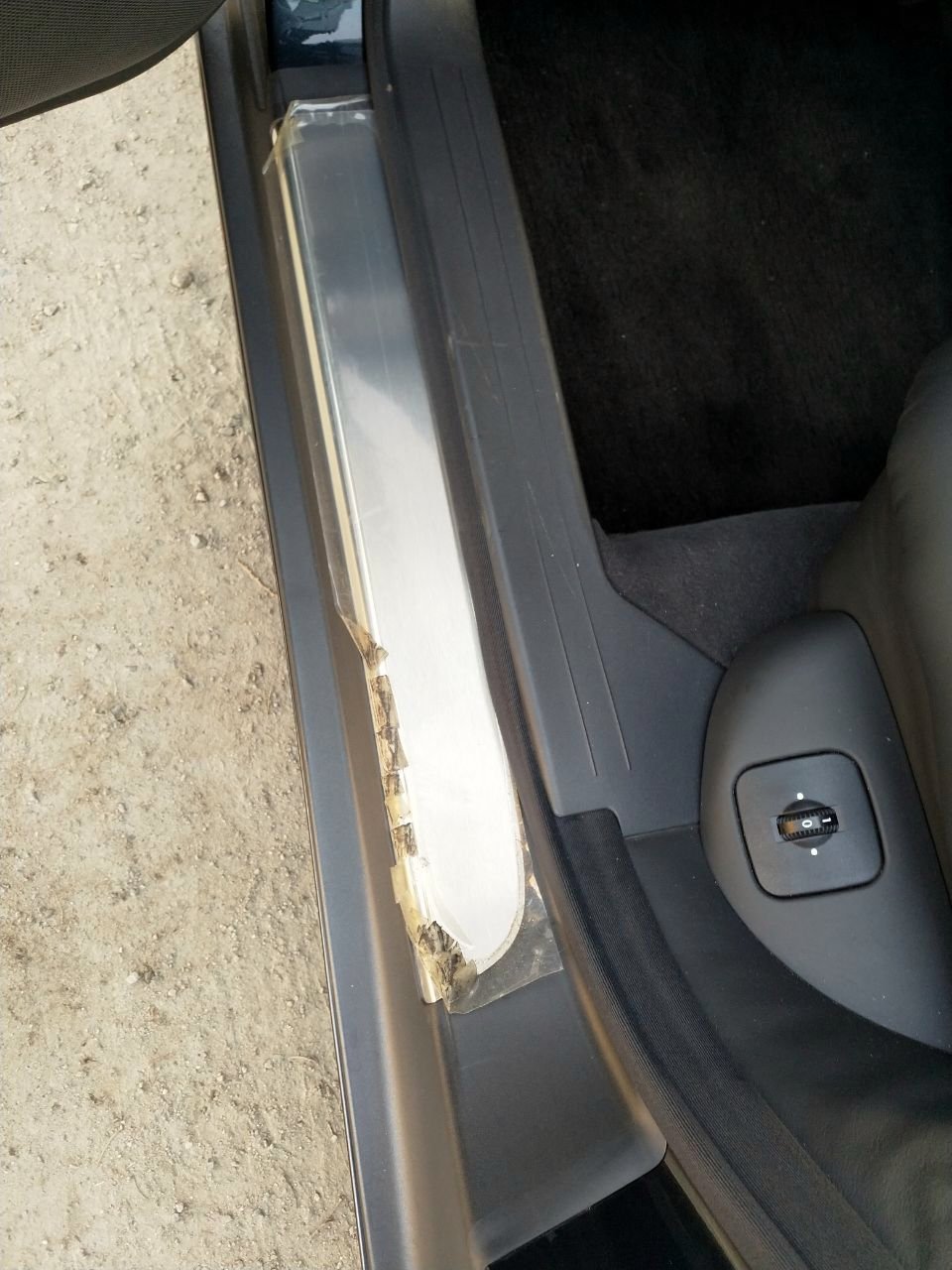 Mechanically everything seems to work perfectly. SRS light staid on when it came off the truck, but it disappeared after a while and has not disturbed since. Battery was flat so maybe system didn't like that. Engine is actually too silent for my taste, no nice V8 sounds, just a whole lot of silence inside the car even when flooring it. Air suspensions flies over any bumps with amazing comfort.

And LOL at the size of the thing. I mean, the R-series is a big car...

2000 km driven with zero issues. Even the fuel consumption is pretty decent, it looks like I can actually get under 9l/100 km on highway. Not bad at all. Of course stop-n-go traffic makes the figure well in the two-digits but anyway.

I had a full service scheduled for today. Changed engine oils (with Forte flush) + filter, flushed autobox, replaced air and pollen filters, transaxle oils, coolant, brake fluids, and the steering wheel buttons I managed to clean too well and broke tha paint. Also the european headlights (with all-new bulbs) got installed. Emission testing done too to make sure no surprises on registration inspection. 1100 € total bill, pretty much what I expected the first service be. 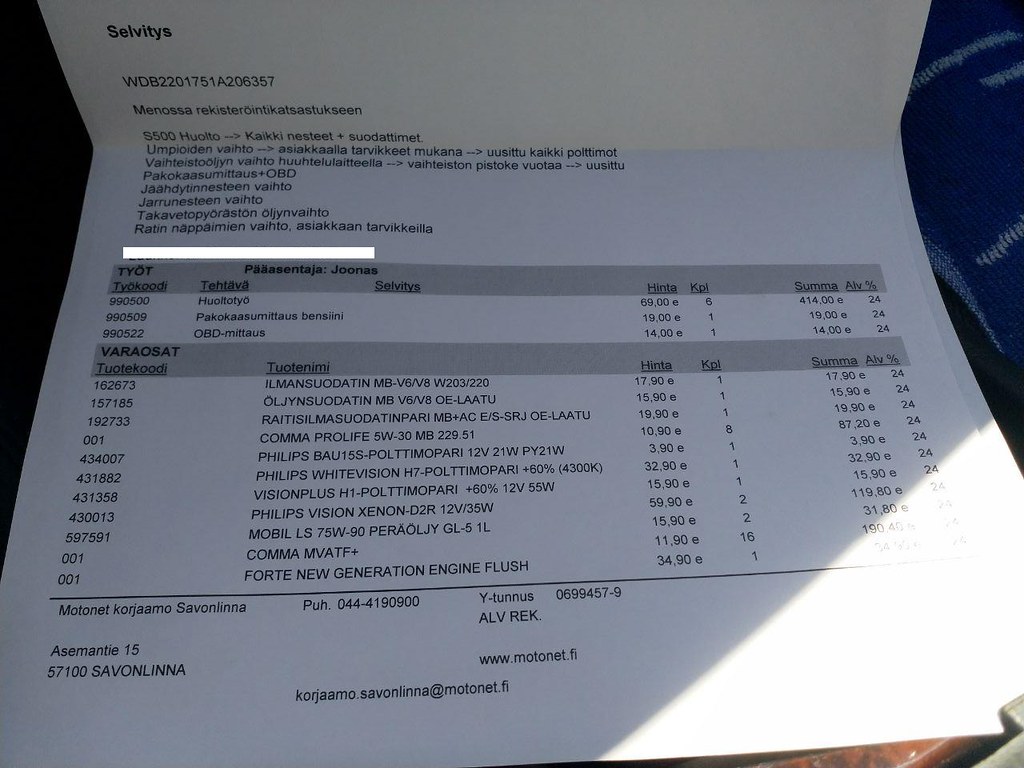 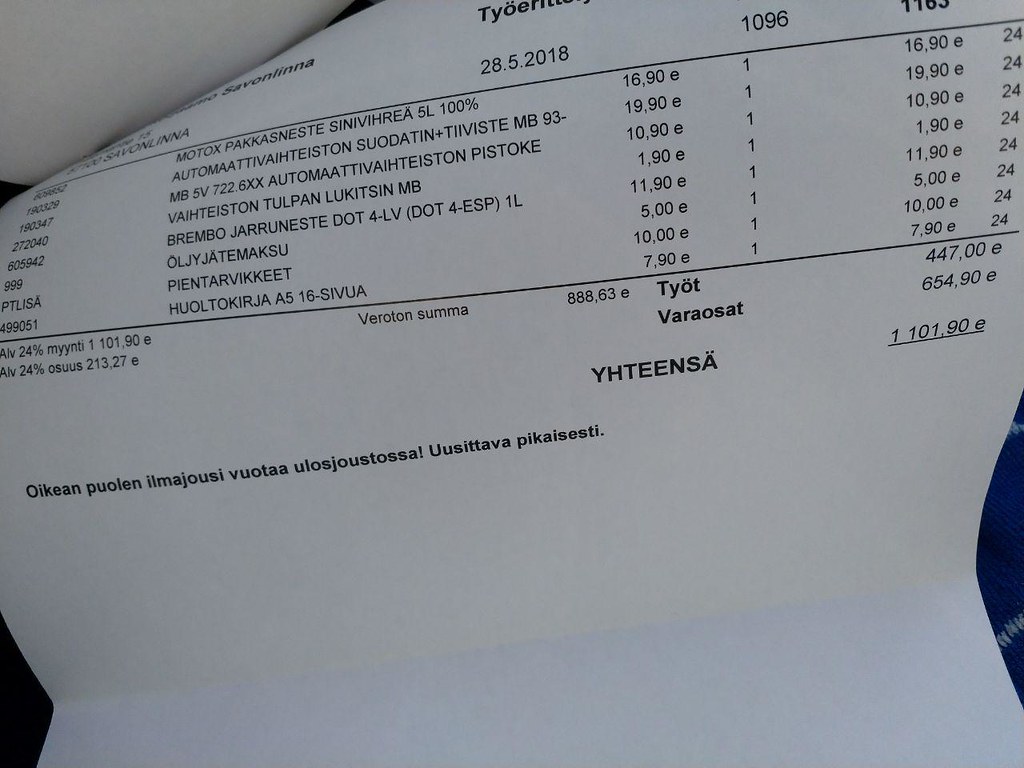 After leaving the workshop I noticed the left side steering wheel buttons are not perfectly aligned, I'll have to go back some day to ask refit it. 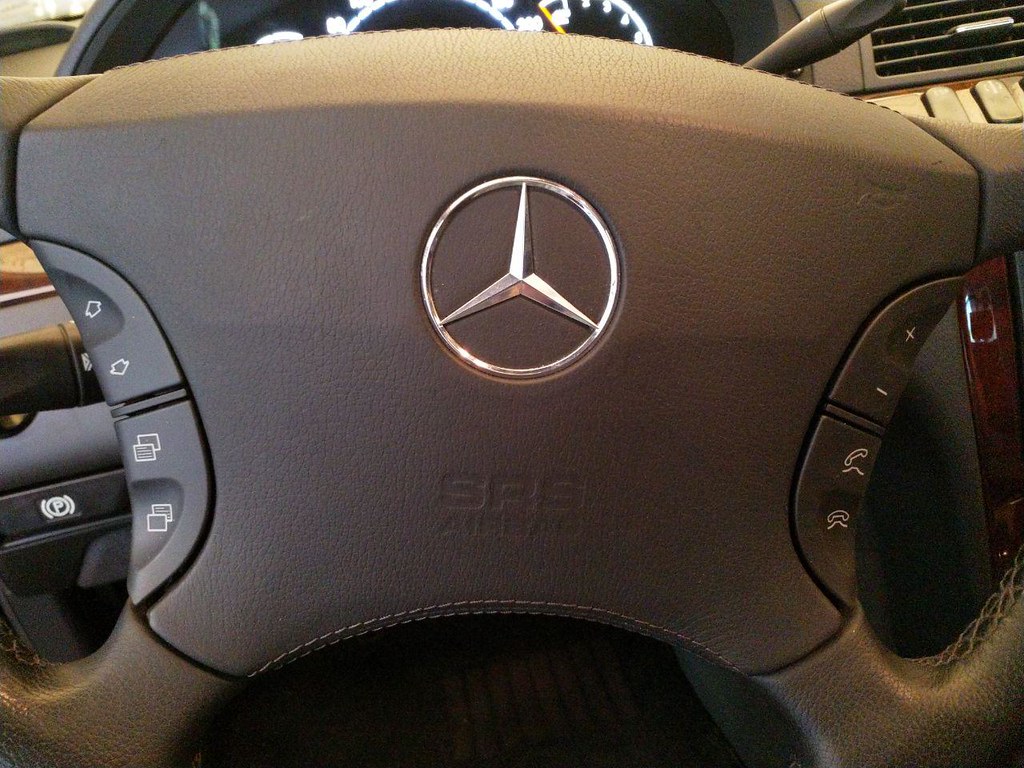 When they lifted the car up, right front air spring leaks all pressure out, so it needs to be replaced before I can take it for registration. Roughly 400 euros for a new good quality bag plus labour, which shouldn't be too bad. Good enough reason to ask tax authorities for a delay in the taxing process, as I can continue driving without plates and no road tax running

Photodump. I'm wondering wheter to take the JDM plate holders out or leave them. The Finnish tiny plates are the same width but a lot lower. 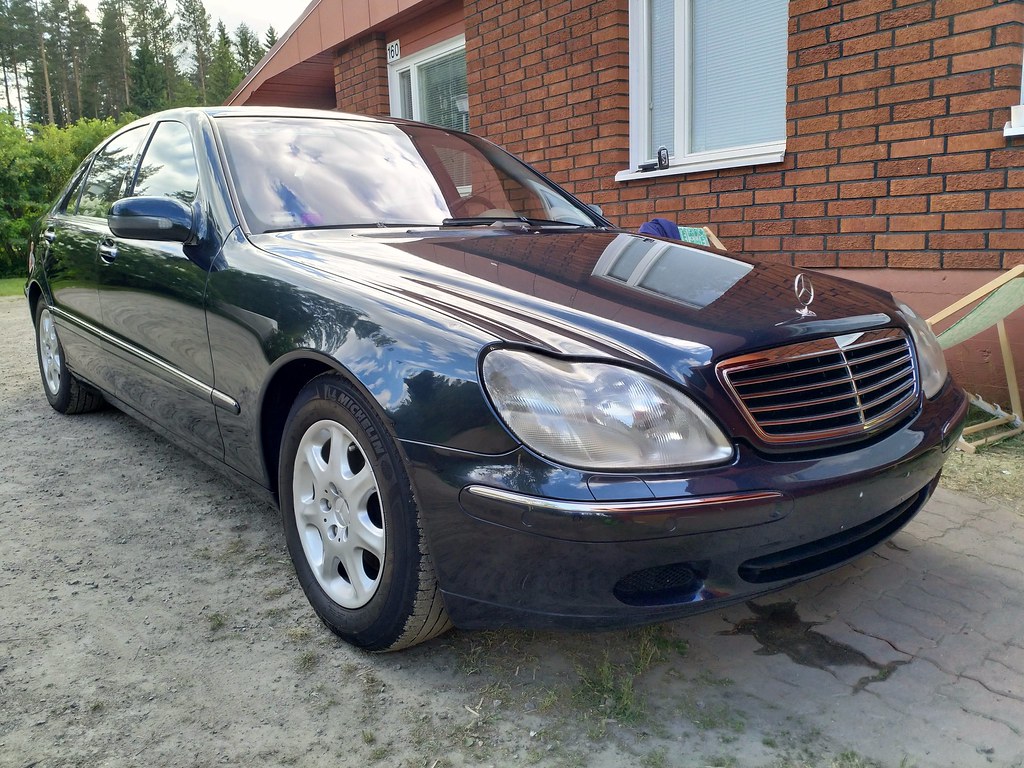 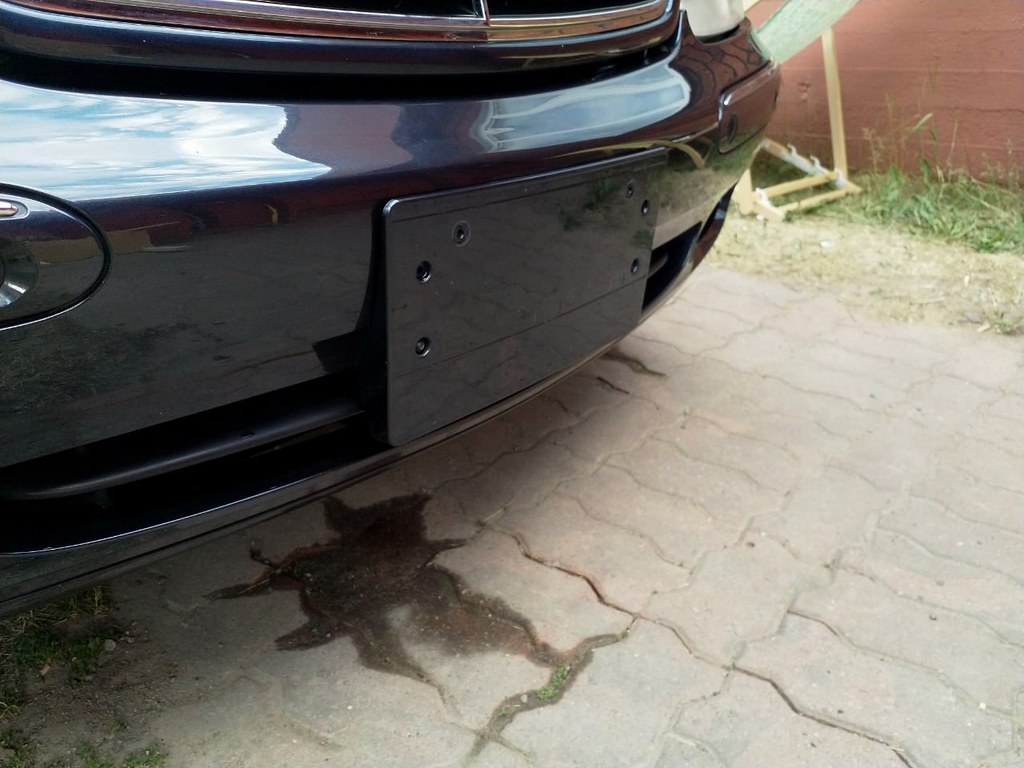 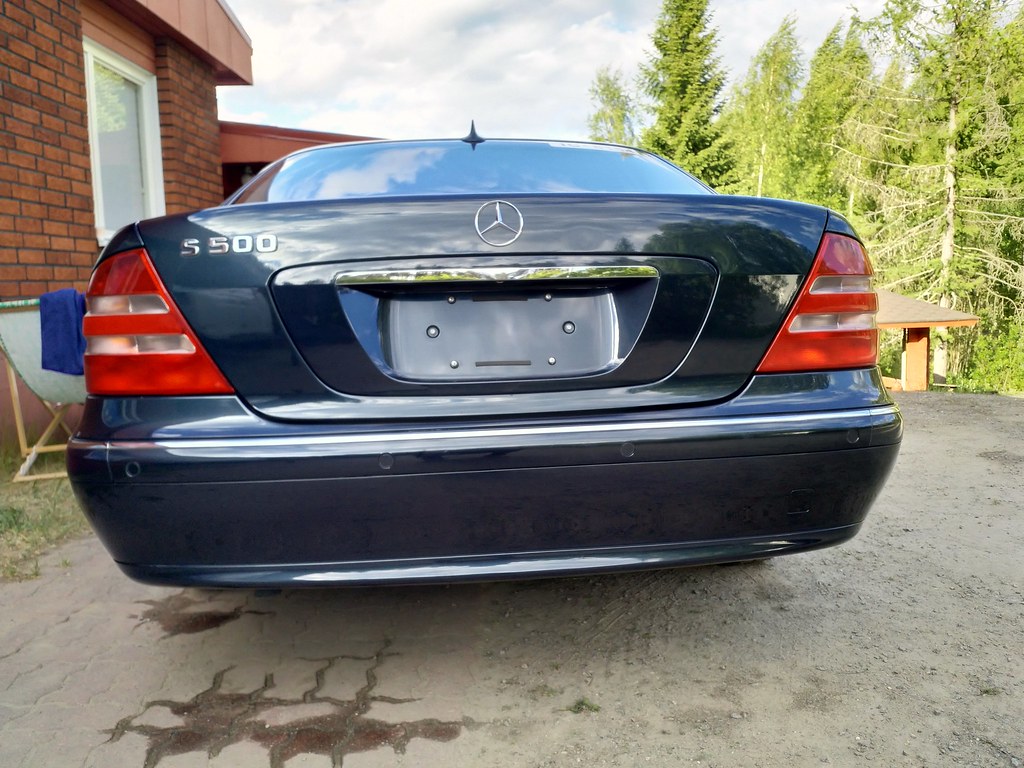 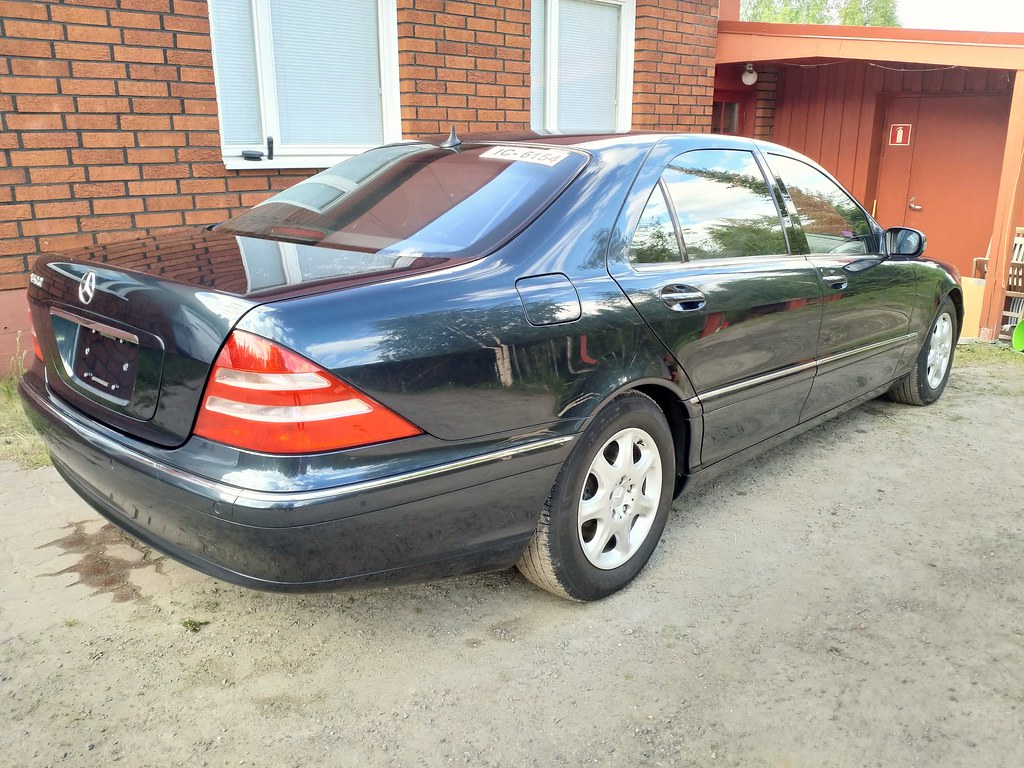 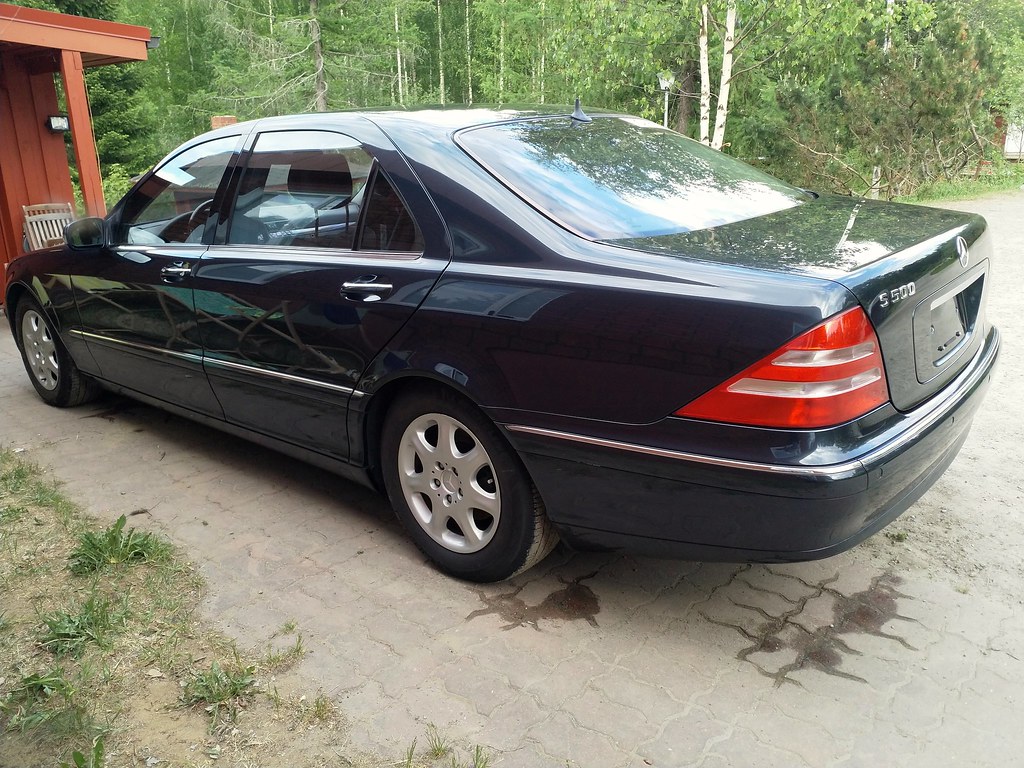 Few dents here and there to remind it has lived in a big city all its age. 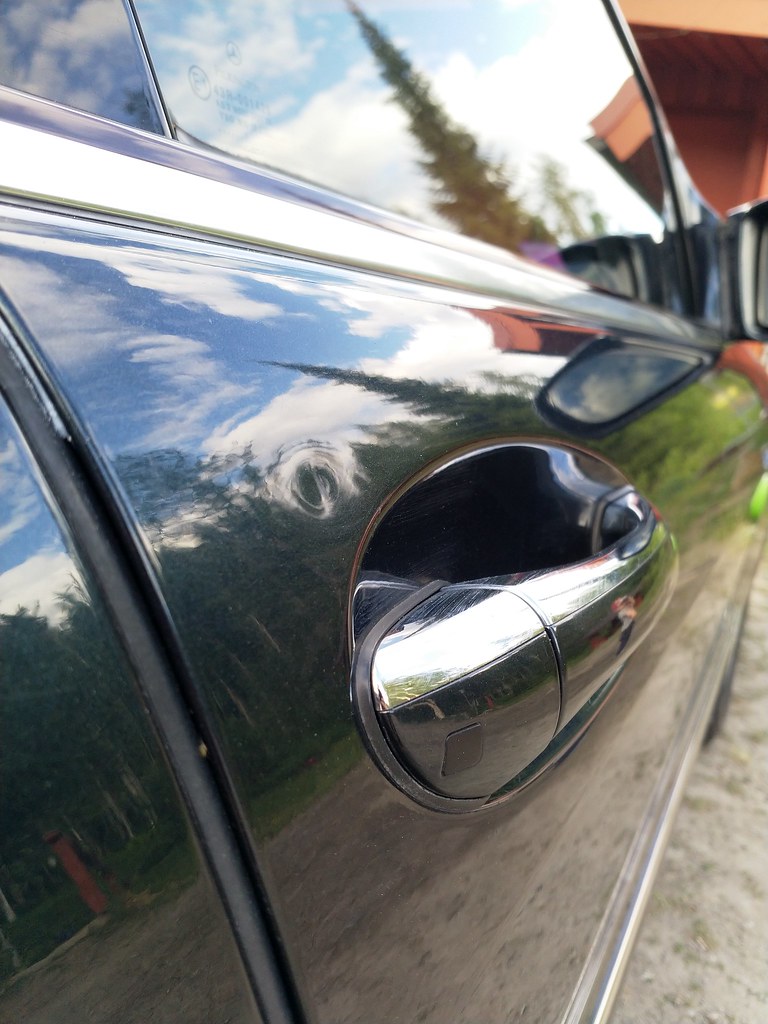