Seb has a vague resemblance to Christian Horner in that picture :lol:

I was thinking along the lines of sumthing from Starwars where the Emperor (marko) would talk to Darth Vader (seb)! Legard: Round the corner
Brundle: Somebody please shut him up

It looks like he is trying to eat the microphone.

It does look a bit like Martin's shoulders are sagging in despair/resignation.

D'oh people already have the same idea as me. Well, I guess it's bleeding obvious! :lol: 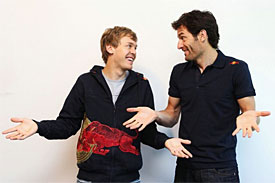 "I cut the adorable shaggy hair a bit too short. Ninjacoco from FinalGear is gonna whack me...right......here. Oof!"

Seb Vettel actually posted his thoughts in the diary on his official website (in German) already on the race day. He wrote the following: ?I did not make a mistake. I was much faster than Mark. I will now try to see the positive side as I have found the speed in the car that I was missing in my previous races.?

And yesterday?s entry also contains a couple of sentences that were missing in Red Bull?s press release. Vettel says: ?As the saying goes: The cleverer give in. The fastest guy should win, like this and not in any other way.?(Es hei?t ja so sch?n: Der Kl?gere gibt nach. Der Schnellere soll gewinnen, so und nicht anders.)

This reminds me of Alonso who has sometimes been very diplomatic towards the international media but not so with the journalists who are his countrymen. As if no-one could translate it and spread the information in the world. And I guess that the photo doesn?t really tell the truth.
Click to expand...

"We are two WILD AND CRAZY GUYS!"

"Where did you say he put the steering wheel?"

Richmondgal said:
"I believe I can fly..."
Click to expand...

"I believe I can touch the sky."

'The exact moment Mark realised that fitting a bar-fridge to the back of his car wasn't such a great idea after all.'