You know when they weren't killing Americans? When we were working with Iran under the structure of the nuclear deal - remember the one Trump blew up?

Hey, remember that time Trump pulled us out of Syria with no warning and left our bases to the Russians and Turks so they could slaughter our allies and you said he was getting us out of foreign wars? I think you justified that one by saying he was bringing troops back home and letting regions deal with their own stuff.

So, how's that been working out this week, what with Trump pissing off the entire planet by kicking the hornet's nest that is the Middle East with an extrajudicial assassination of sovereign nation's top military leader, followed by threats to commit war crimes by bombing world heritage sites? I just don't get how you think Trump is in the right here; Iran was being brought back into the international community until he alienated them. Now we have Iraq wanting to kick us out, Afghanistan has put us on notice that they will hold us to the treaty restrictions regarding not using them as a base of operations against other nations, Iran is back to chanting "death to America" (so is Iraq, by the way) -- all because Trump is scared that a prison cell awaits him when he leaves office.

There is no perspective on this where the US isn't the bad guy.

LeVeL said:
In other words they want to keep killing Americans.
Click to expand...

Weak argument, to say the least.

This president has shit the bed in the Middle East, period.

Well that's the first thing you've gotten right in a while. 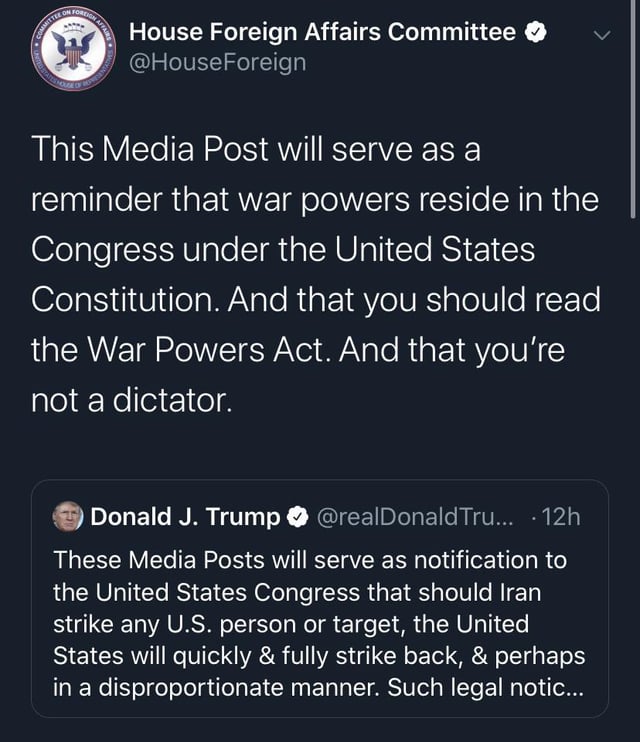 You Americans have such nice ways of saying "murder".

DanRoM said:
You Americans have such nice ways of saying "murder".
Click to expand...

Tomato, tomahawk missile, it's all the same

Leaving them to deal with their own problem was good for Syria, but it is somehow not good for Iraq.

A justification is an argument.

Libya - Certainly a mistake, but let's take a look at why we went in. Libya was in the midst of a civil war in which Gaddafi was targeting the civilian population with both chemical and conventional munitions. The US, France, UK, Belgum, Denmark, Italy, Norway, Quatar, Spain and Canada all supported the air campaign made up of the US, UK, France, and Canada. this was combined with a naval blockade and economic sanctions.

Syria - Involved the UK, France, Italy, Germany, Denmark, Jordan, Turkey, Iraq, Canada, Australia, Saudia Arabia, the UAE, Bahrain, and the US; it was a fight against the ISIS caliphate and worked with Syrian native ground forces. Again, we were part of a multinational coalition; we were fighting with allies against a terrorist organization responsible for the torture and murder of an unknown number of people.

Somalia - We've been in Somalia since 1992, Obama increased our presence there to deal with what's left of al-Qaida and al-Shabab, which continues to pose a growing threat across the region. Somalia hadn't had a functional government since 1991, we are there to try to limit the influence of the extremist groups that would seek a foothold to form a new tribal territory with an extremist foundation.

Yemen - If you are so against this, why aren't you bothered by Trump's April 16, 2019 veto of a bill to get us out of Yemen? Yemen was in the midst of a civil war and was then attacked by Saudi Arabia and the UAE in a surprise air assault that was backed by numerous nations, including the US, UK, Bahrain, Kuwait, Oman, Quatar and France. Obama offered logistical and intelligence support in the form of targeting information, air to air refueling, and political support in the UN (despite evidence of war crimes). I have been opposed to our support for Saudi Arabia and the UAE in this since the first news of war crimes came out.

Then we have Trump joking with golf patrons about assassinating the military leader of a foreign nation just to try to avoid being held accountable for his numerous crimes. This was done without any discussion with Congress, no coalition was formed with other nations, and no warning was given to Iran to pull out of Iraq. This would be the equivalent of China destabilizing Mexico with a decade of war and occupation, then bombing Mike Pompeo when we tried to go in to stabilize the region in the power vacuum left by China. The fact that the motivation is entirely politically self-serving is what makes it worse; Trump has managed to further destablize the Middle East, alienate our allies, and damage our standing globally - all because he's scared to leave office and face prosecution.

DanRoM said:
You Americans have such nice ways of saying "murder".
Click to expand...

There are times when a general is a valid military target - Murder, assassination, however we describe it, it's the same thing. Trump's actions were abhorent and have been condemned by almost every national leader who has commented on the strike.

LeVeL said:
You're way off course here so allow me to back up a step here.

You made a post about declaration of war without congressional approval. If you truly have an issue with that, then surely you must also be outraged by Obama dragging us into Libya, Syria, and Yemen, right? There certainly wasn't a congressional authorization for Obama to go into those countries! Right?
Click to expand...

We never declared war in those cases, Trump is trying to declare war from the Oval Office - something he is constitutionally prohibited from doing. Congress has allowed presidents limited powers regarding the deployment of forces in the past due to expediency and the belief that whomever was the president was a reasonable person. That has now changed and Congress is considering revoking that power from the Executive branch and restoring it to the Congress where it always belonged.

This isn't a comment on the legality of the President deploying the military, it's about a President so unhinged that Congress and the world no longer trust him to act in the best interest of the nation.

And knock it off with the Whataboutism - Obama didn't do this, he's not the issue.

Meanwhile - Iraq has voted to expel the US from their borders and our forces are preparing to withdraw.
Last edited: Jan 6, 2020
M

Blind_Io said:
Well that's the first thing you've gotten right in a while.


Blind_Io said:
And knock it off with the Whataboutism - Obama didn't do this, he's not the issue.
Click to expand...

He can't. It's his only remaining argument - and it's also a fallacy, like pretty much everything he says.

Evidently, this situation was not yet a big enough mess.

Remember, Trump predicted this back in 2011:


Is he about to fulfill that prophecy?

Since not even Mitch McConnell, the guy with actual power and influence whose number one priority was making sure president Obama would be a one-term president (LOL), made noise about this, I’m sure that your point is moot, as usual.

Anyway, why the need to deflect? Are we finally witnessing you not managing to justify to yourself something that Trump has done and this is your last resort?
You must log in or register to reply here.
Share:
Facebook Twitter Reddit WhatsApp Email Link
Top