Why did they even need a screwdriver? Those plate holder thingies usually work just by unclicking them with your hands

narf said:
Those plate holder thingies usually work just by unclicking them with your hands

In theory, yes. I didn't manage to open the front frame without damaging it. It still works, but a few clips went off. A thief who just wants to get the plate as fast as possible will never be as careful as I was...

Anyway, car is on new plates. I spent less than an hour at the municipality and the plate maker, including the being there 20 minutes before opening time (which was a good decision, because in that time 10 other people came in to join the queue).

And I just spent half an hour getting the remains of the old Umweltplakette off the windscreen.

Heh, plastic plate holders. I've never paid enough attention before to notice those on any of your cars. Do they actually need to be removable? Screws straight through the plate or double-sided tape is the solution of choice here.

I also wonder what would be done here if something similar happened. It's not common for you to re-register a car, certainly I've never heard of it being done and I don't know what they would give you if you did.

When I was visiting Beni last week, the prospect of not-so-heavy weekday evening traffic on the Nordschleife was too appealing to miss out, so I did two laps on the way home. 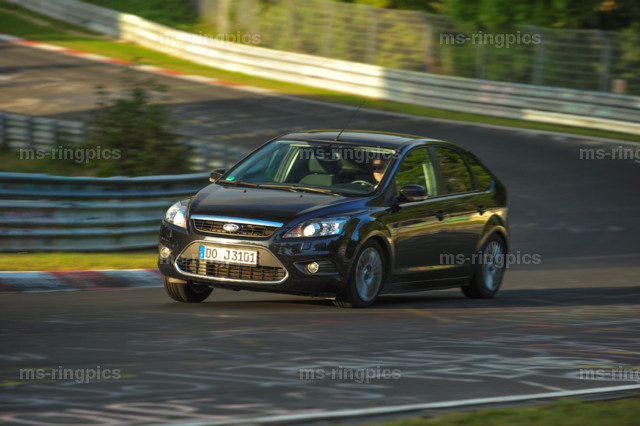 Going onto the second lap: 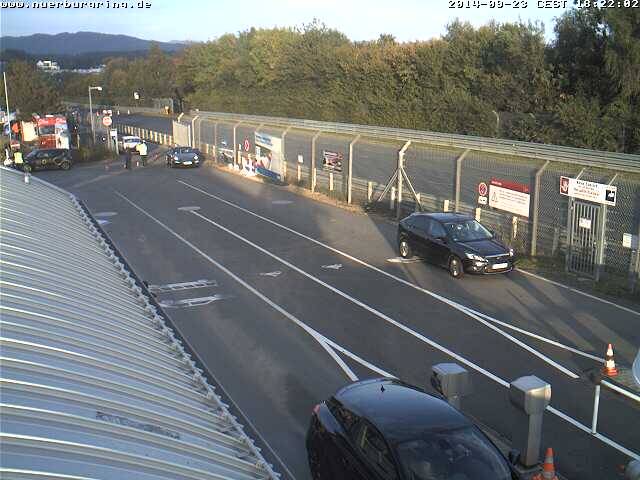 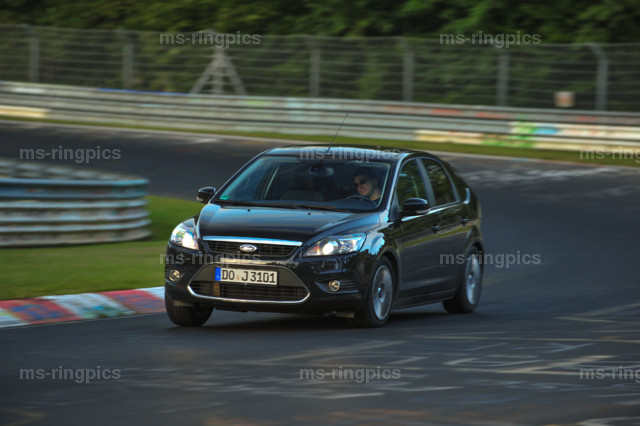 It was good fun, and there's a little regret that I didn't have a video camera in the car. It would have made sure no one wanted to be my passenger anymore.
Last edited: Oct 2, 2014

I can add something from ringmeet weekend. Your car is too discrete, so I almost missed you. 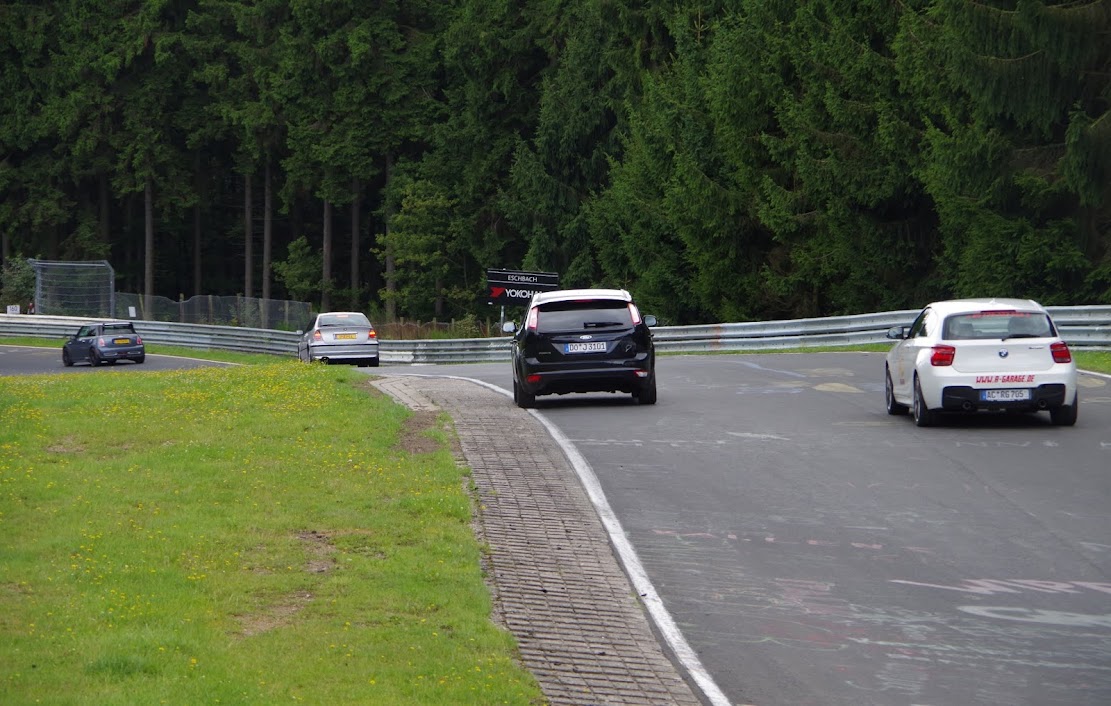 Thanks for the photo. And yeah, I have the talent to be missed by the Ring photographers...

My car insurance got ?15 cheaper for next year. Still, with the car being some years old now, I think about giving up the comprehensive coverage and move to partially comprehensive, thereby saving another ?160 or so...

Time for an update. I actually repaired/modified the CBF - with the help of a neighboury friend* of course. This actually happened a few months ago.

So, what did we do? I purchased a GPS system for riding around without getting lost, and we installed it in time for my short weekend holiday in Zeeland back in may. It's a Garmin z?mo 390 LM and so far I'm happy with it. The "choose curvy roads" feature is a bit wonky, though. These are the parts: 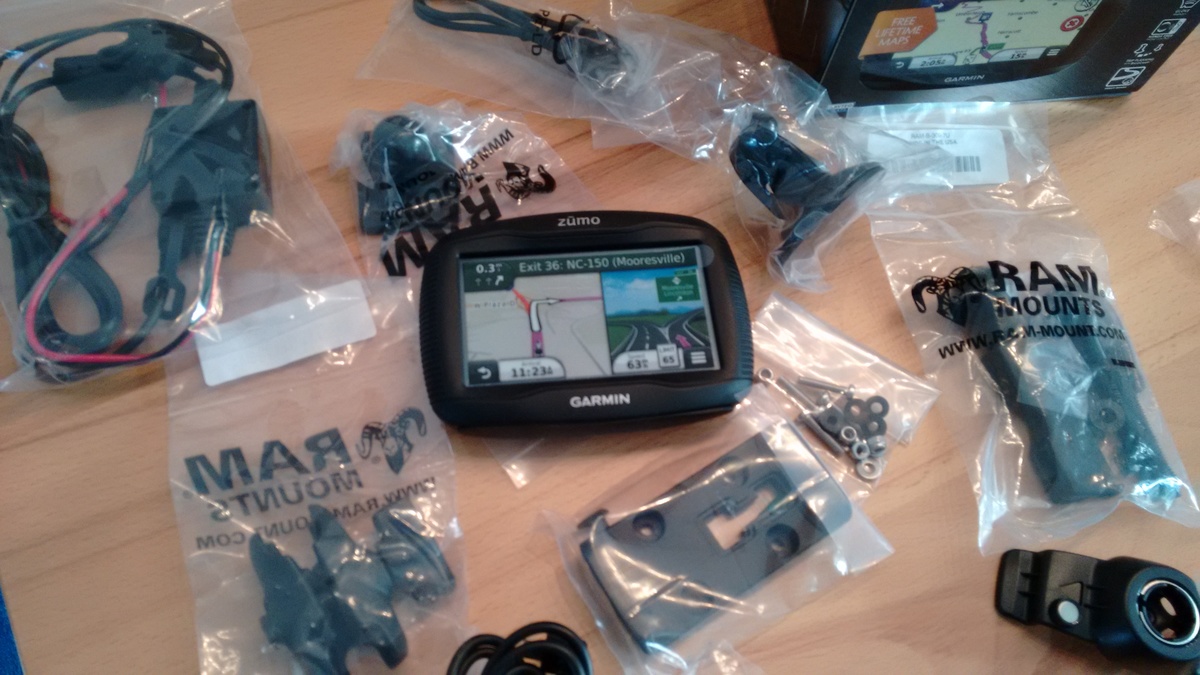 The thing came with a looooong cable, and the cable has a little box worked into it which holds a fuse or something. It seemed logical to us the get electricity somewhere near the battery and position that box under the seat. Great plan - it just required to put the cable from the handlebar to there underneath the tank. We had to take that off, at least a little. 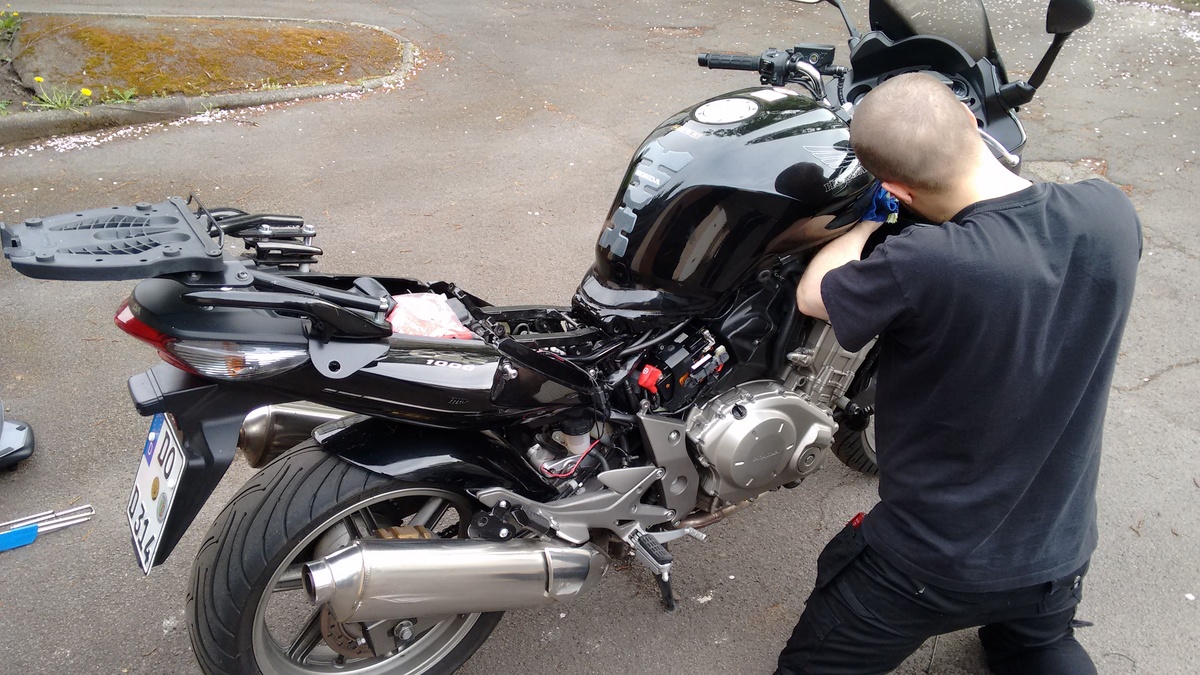 The fuse box now sits right about there. 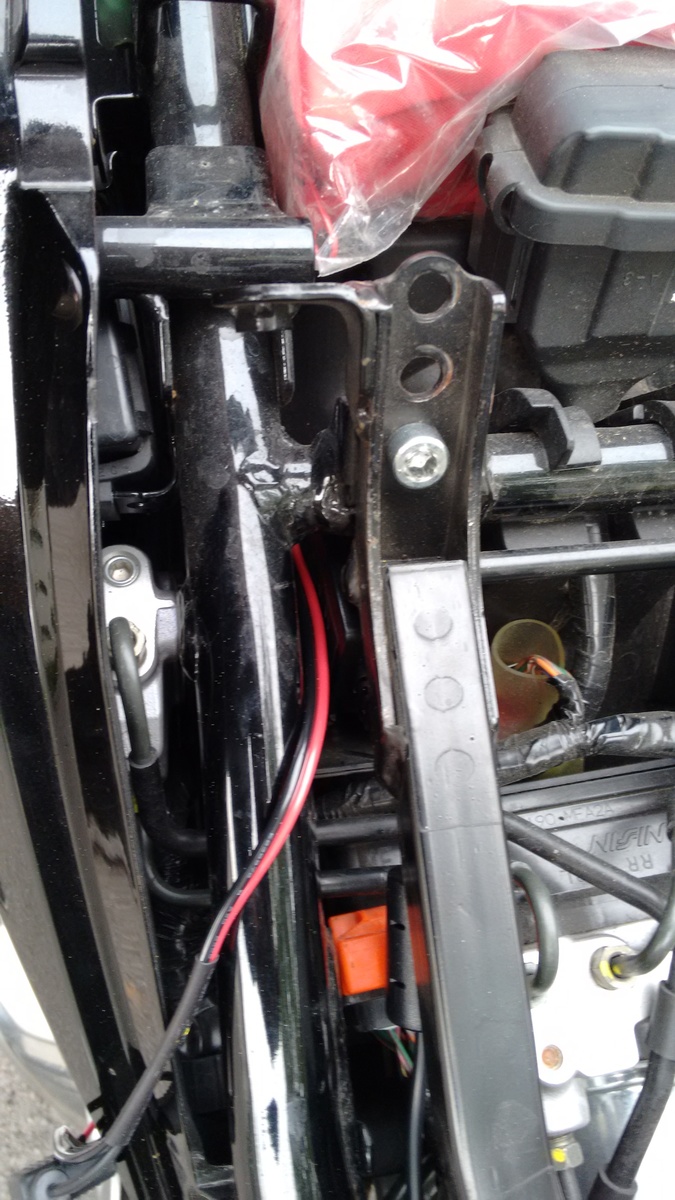 Next problem: Where exactly get the power? We needed to branch off somewhere that's under power as long as the ignition is on (Z?ndungsplus), but didn't have a wiring diagram or something of the bike. Eventually, we settled for the wires leading to the plate illumination. These are located under the right rear panel, so we had to take that off as well (no pictures, sadly).
Aa my bike was built by some lovely people from Italy, of course there had to be a hiccup in the wiring: The red wire is actually ground, the black one is plus. We joked about that before we installed the wire branching, so we were at least not surprised that we needed two attempts to get it working.

Anyway, after confirming the GPS system gets it's power as intended iff the ignition is on , we put the bike back together. End result: 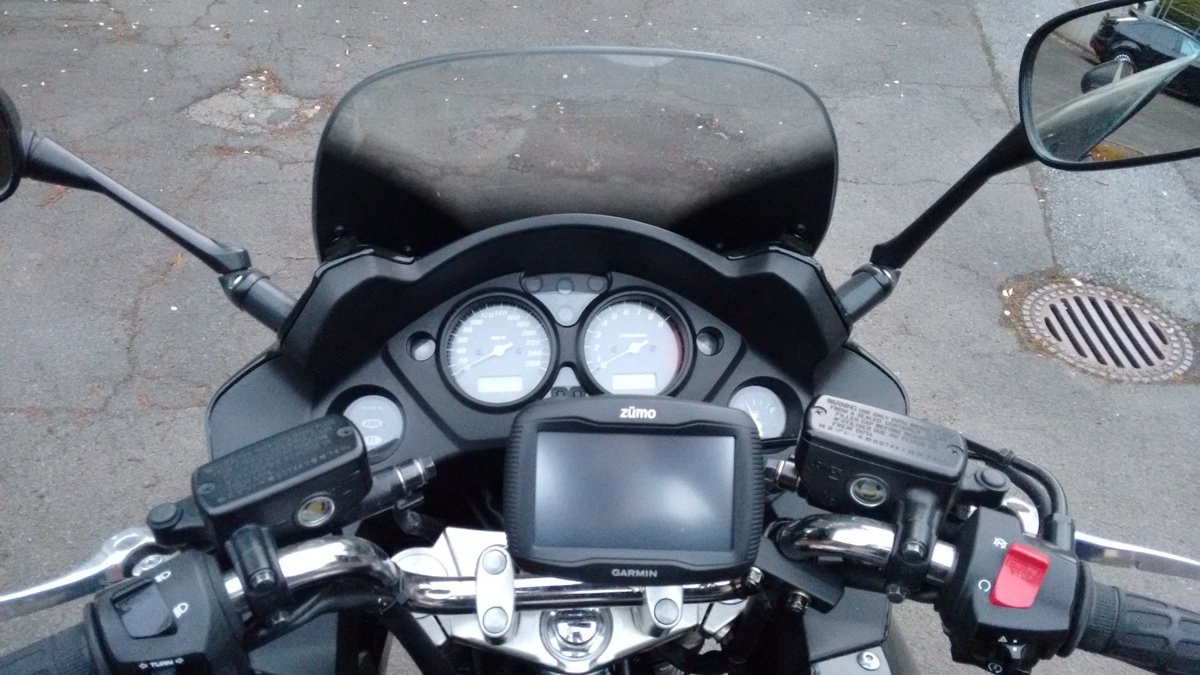 Next up, the bike was due to T?V in May too. From an unfortunate incident two years ago, both my brake levers were bent and I didn't want to go to T?V inspection that way (probably a little too paranoid). Replacing the front brake lever was easy and cheap enough (replacement part: ca. ?25 on Amazon).
But the rear brake pedal is another story. There are no third-party parts available and Honda charges over ?80 for an OEM one (see also this post and following). And after the local Honda dealership actually managed to get me a wrong one, my friend who installed the GPS came to the rescue. He has access to a workshop at the department for mechanical engineering at university and used the equipment to bent the old pedal back into shape. Before/after pictures: 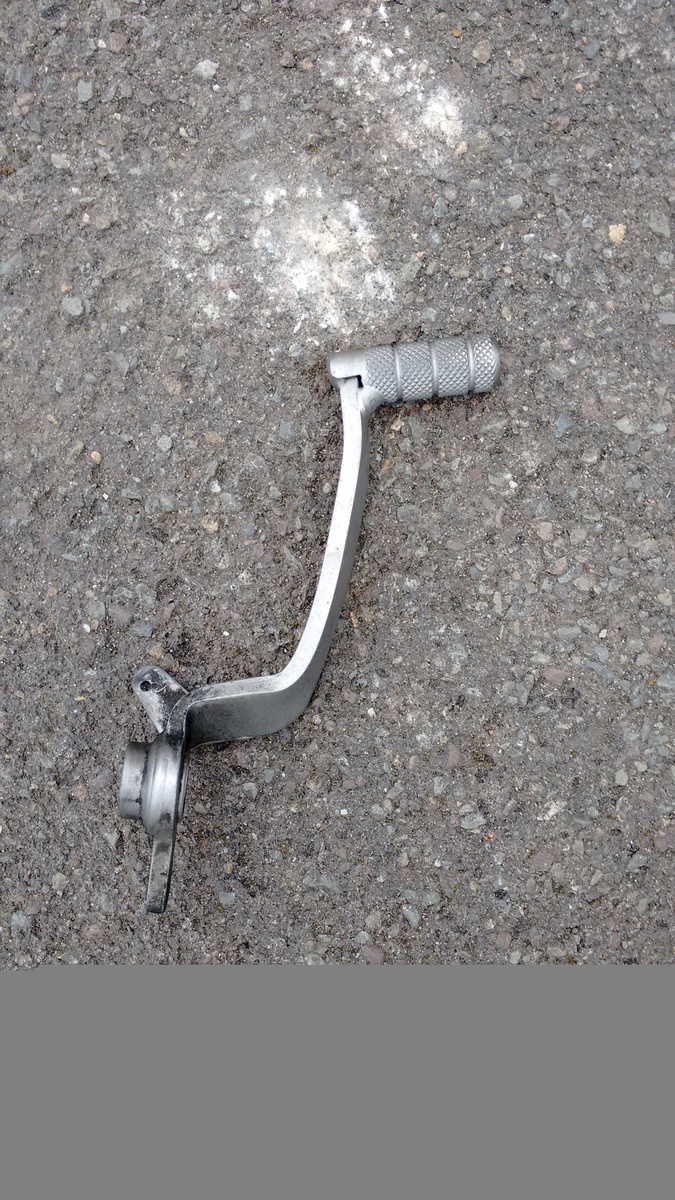 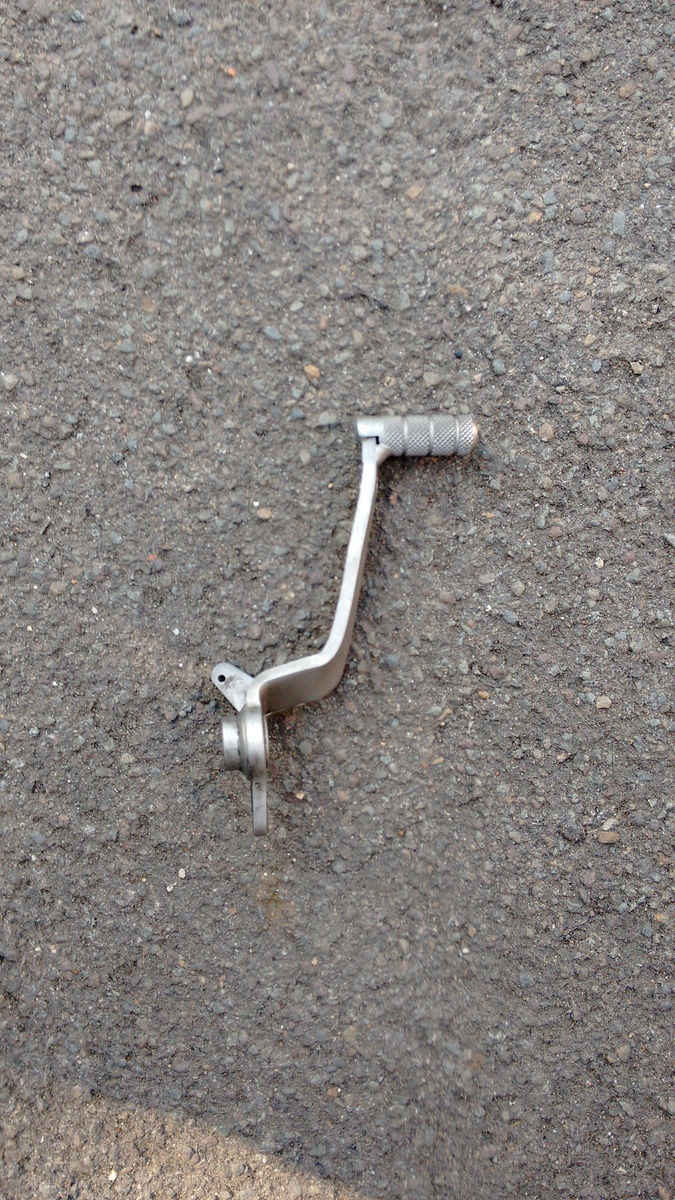 Much better again. And the bike passed T?V without even a hint of a fault and is good to go until May 2017.

Next "project": Finding a good place for FinalGear vinyls, after cleaning the bike first. It's rather dusty after the ride to ringmeet.


Bonus picture: One day, it was raining when I rode the bike, so upon returning, I had the opportunity to document the shunting path into my garage.
The foam plastic thing leaning on the left foot peg is protection in case I come too close with my car, which should be prevented anyway by the piece of wood bolted to the ground to mark how far the right front wheel can go. 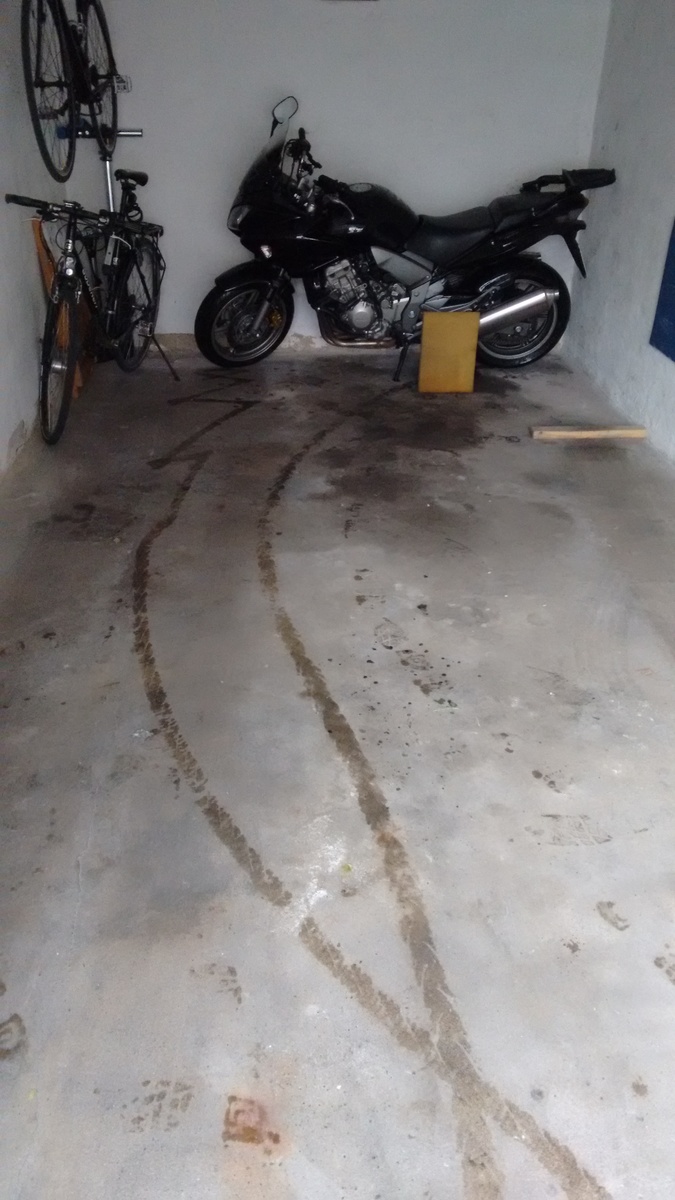 * friend who just happens to live across the street

Another update - not so pleasant this time.

Today I had the displeasure of being passenger... 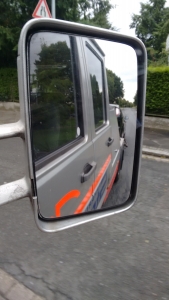 As already written in the stupid driver stories thread, this morning I misjudged a gap and as a result hit the curb on the left side of the road at about 20 kph or even more. On arrival at my workplace I heard a distinct "pffffffffffffff............" from the rear. Great. My car doesn't have a spare wheel, instead a tyre-repair kit (past its date of expiry), and I never wanted to use that anyway. So, a call to my insurance (I have breakdown cover) was in order and the car got towed to the nearest tyre shop.
A closer look revealed damage to the front wheel too. 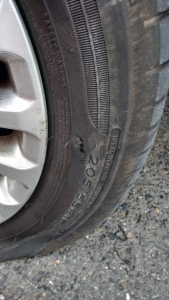 Left front - no hole, but that kind of damage is enough for me to replace the tyre. The scratch in the rim will stay. 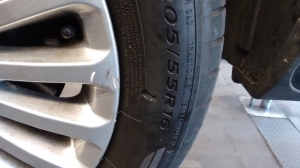 Damn expensive commute I had today.

My bike's battery is on the way out, it seems. It doesn't like sitting dormant for a few weeks anymore (wasn't a problem a two years ago), and especially not when the primary riding is short-distance. As a result, after having some difficulty waking up this morning, the bike refused to start this evening. Apparently, only a kilometre or so after the last start (fuel station) wasn't enough to replenish the battery for the start after the next stop (supermarket). So I walked home and called around for someone with a starter cable. Luckily, one of my calls was answered and so the bike doesn't have to stay out for the night.

Upon arrival at home, I took out the battery. I guess I'm putting the bike into winter sleep now (needs some cleaning first).

After seven years and four days it's parting time for the Focus. It served me well for just over 58,000 km in that time, but time has come to get something else. There's nothing wrong mechanically or otherwise with the car, it's just that I want something new and a bit less boring.

Let me quote some more or less meaningless statistics:

And at last, a "parting shot" from last autumn: 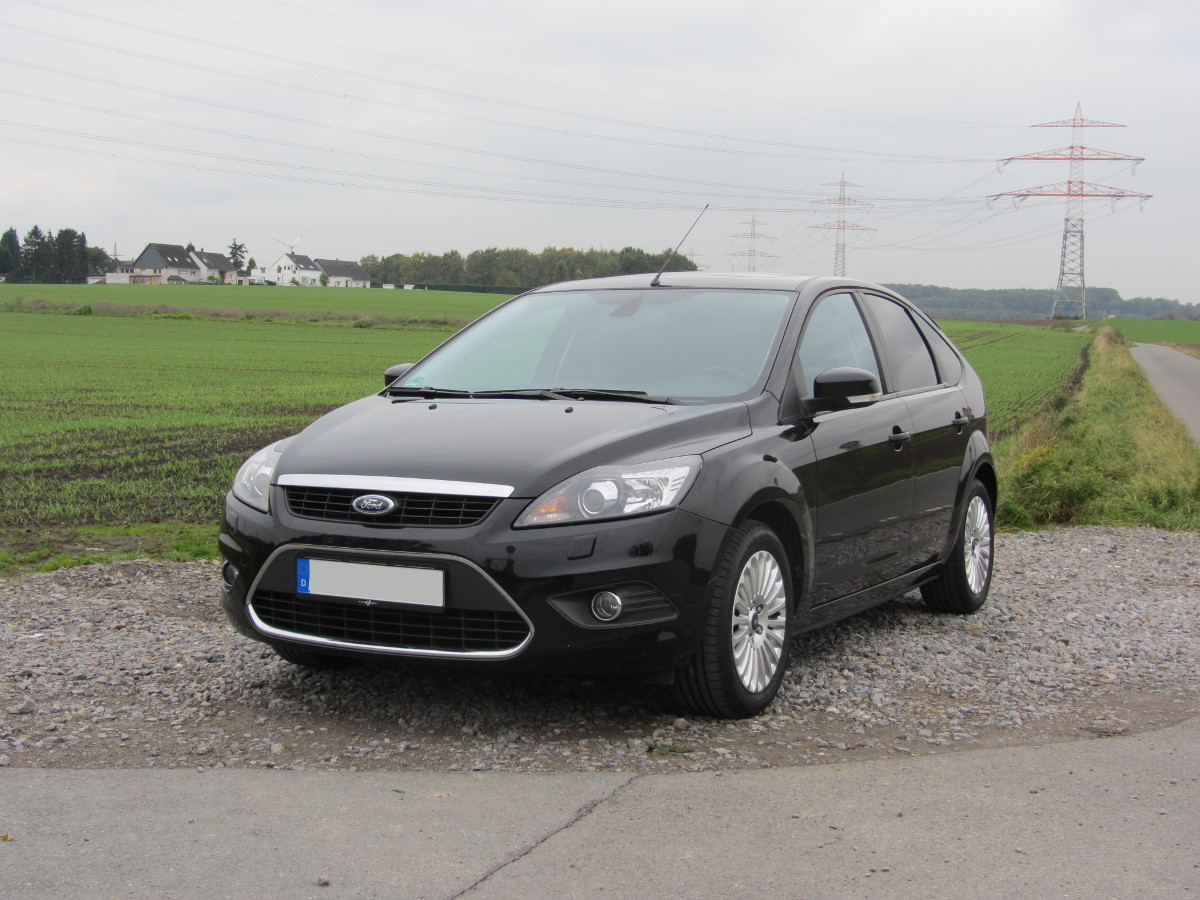 When I get a replacement car (later today, if nothing goes wrong), I will open a new thread for that. Please refrain from cluttering up this thread here by speculating about what I will get.
You patience is appreciated.

MIA...oh, sorry.
Seriously, I am glad to hear it treated you well and a also bit sad to see it go, since I have faint emotional ties with that car (It carried me to Ringmeet!).
Thanks.

It's past 6.30pm in 'Schland so presumably all car dealers are now closed so hurry up with the new thread already. Waiting!!!

So what do we think?

My money is on the amazing deal he got on a diseasel VW of some kind and is doing his patriotic bit to prop up ze Thchermann economy.

DanRoM said:
Please refrain from cluttering up this thread here by speculating about what I will get.
You patience is appreciated.
Click to expand...

So much for that... but i guess its DanRoM's fault for keeping us in the dark

Maybe he's getting a Focus RS?

I can't believe that since he posted that the thread hasn't been spammed to high heaven.

MWF said:
I can't believe that since he posted that the thread hasn't been spammed to high heaven.