I don't have a clue either I just hope it's something that rocks rather than automotive drizzle.

Is the Mustang on sale in Germany yet?

So it's something less boring than the Focus... well that narrows it right down now, does it!? :lol:

Guys, seriously? Do you even read the forums? I dropped so many hints over the last months...

Here's the new one.

DanRoM said:
Guys, seriously? Do you even read the forums? I dropped so many hints over the last months...

Another update on the motorcycle. Well, not much of an update. I took it on the FinalGear roadtrip and thus, it's now at over 30,000 km.

No problems whatsoever on the nearly 5,000 km trip, it was lots of fun.
But I have to be more attentive if I do such a thing ever again. The tyres lost about 0.3 bar each during the trip, I should have had a look at that. And also, despite having an oil change directly before the trip, the engine is now pretty much empty. Need to fill up before I go riding again.

So.... another bike update. This time, even with a picture - a very unspectacular one: 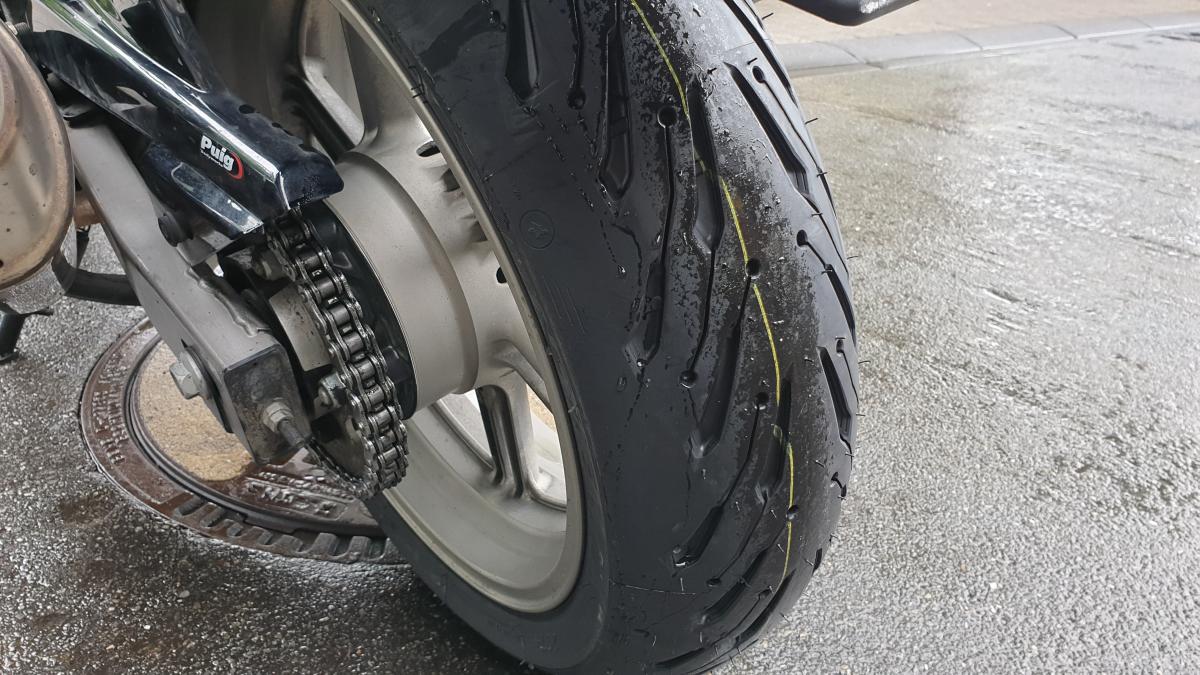 Or in a few words, I had the CBF serviced at 31,500 km and 11 years of age.
The highlights: new tyres (Michelin Pilot Road 5), finally the chain has been serviced, and it has fresh TÜV, valid for another two years. I need to come in for having the rear brake pad changed next week or so, because they didn't have that in stock. No biggie, I'll do that after work, the garage is near my office anyway.

Especially with new tyres, the bike is so good to ride again. The old ones were nearly half as old as the bike - I've had them since 2014 and for about 13,000 km (yes, I've ridden the first set until 18,700 km ). The bike now falls willingly into corners again.
The fact that the last set of tyres lasted quite a few thousand kilometres less than the first one might tell something about the... evolvement of my riding.

Last month, I've done a few test rides on other bikes (more to come on that in the general bike thread), but for now, I've decided to keep the CBF at least until next year. I might be tempted to replace it for Roadtrip 2020 though - after then nine years of ownership, it might be time to get something new.

Looking forward to having much fun this year. Not as much in terms of distance as last year, but hey, one can't have everything.

Another update on the bike - the second one this year, woohoo! I actually bought something for it.

I stole the idea from a friend of mine, because I liked it on his bike. Short version: I installed a phone mount.

Since I installed a communication system into my helmet for last year's FG roadtrip, I've gotten used to listen to music or podcasts from my phone while riding. Basically, with the exception of hard country road riding for fun which requires all my concentration, I always have something to listen to on.
Having the phone in my pocket, of course I cannot skip tracks or whatever. Additionally, having the phone as a navigation device (Google Maps or Calimoto) works far better if can you see the screen.
So I acquired some things from SP connect, namely a phone case for my phone that has this neat thing to cling to a phone holder incorporated in the back side: 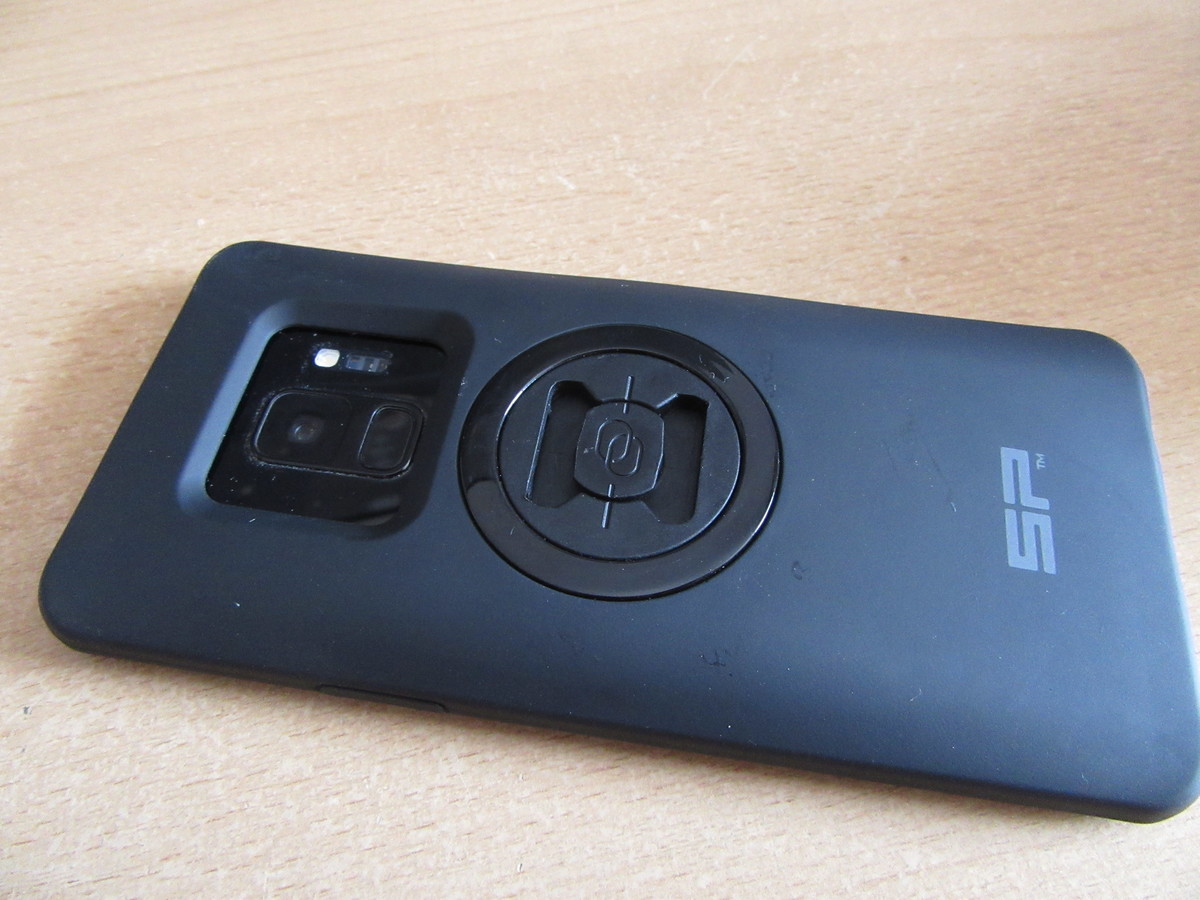 And the corresponding ballhead mount to put on a RAM mounting system: 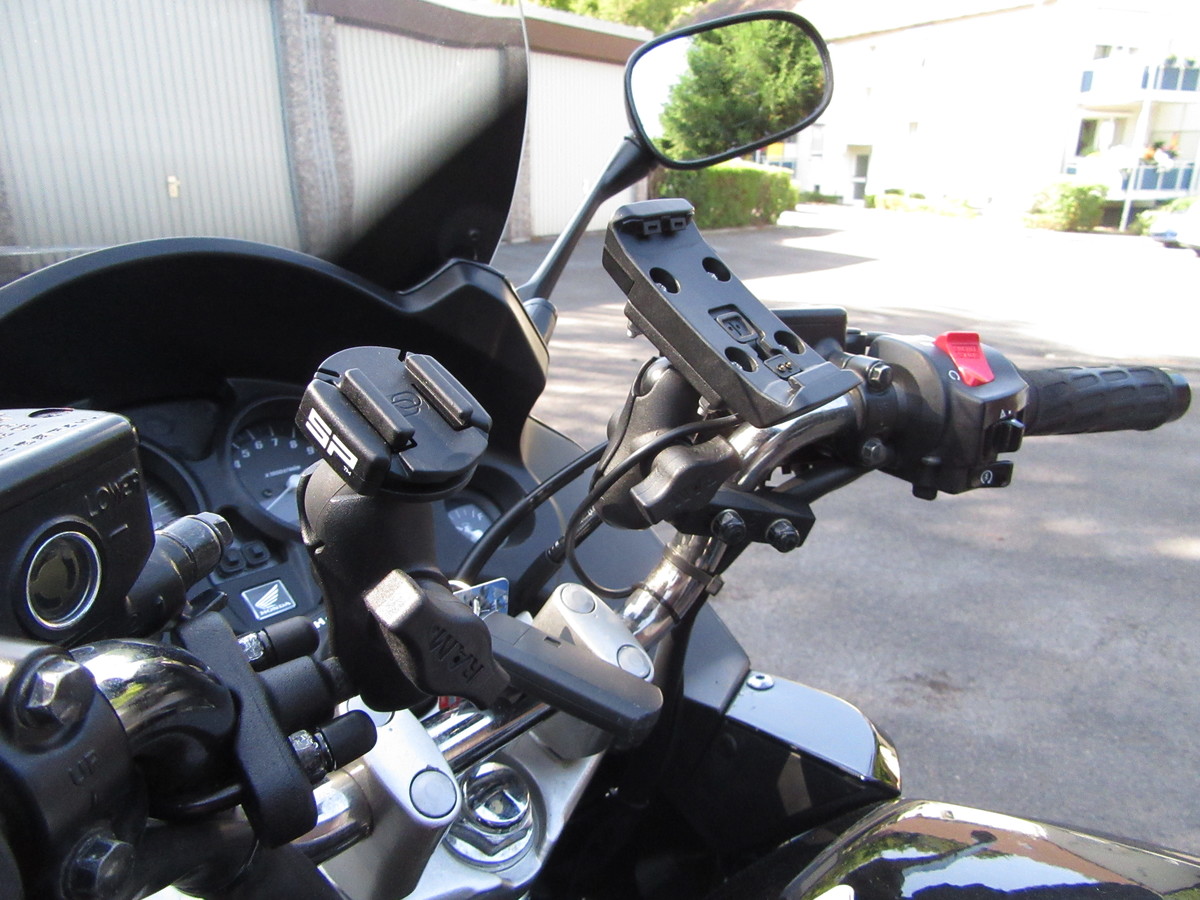 Mounting the phone is simple: Place it flat on the mount, rotate 90°.

The other parts of the RAM mount I had to buy separately.

You see there is also the mount for my Garmin navigation system mounted on the right side of the handlebar. Initially I hoped I could replace the dedicated GPS, which is quite cumbersome to use in terms of route planning compared to modern phone apps. But alas, it has a proprietary connector for the power cable. I did not want to bother with installing another power cable for the phone mount into the bike, or even just with properly removing the one for the GPS. So, I decided the GPS stays, and the phone mount was to be installed on the left side. Just because.

Here you can see it with both devices attached, and the tank bag too: 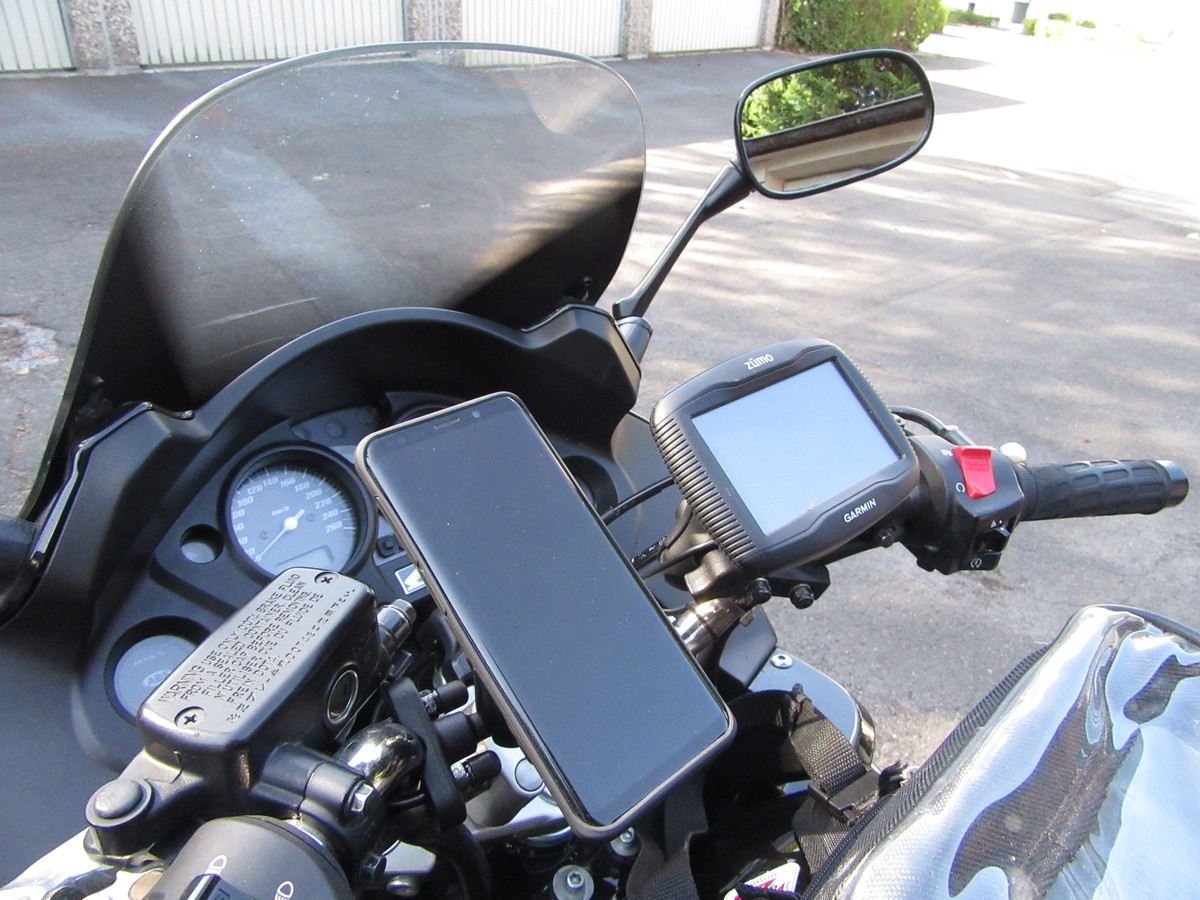 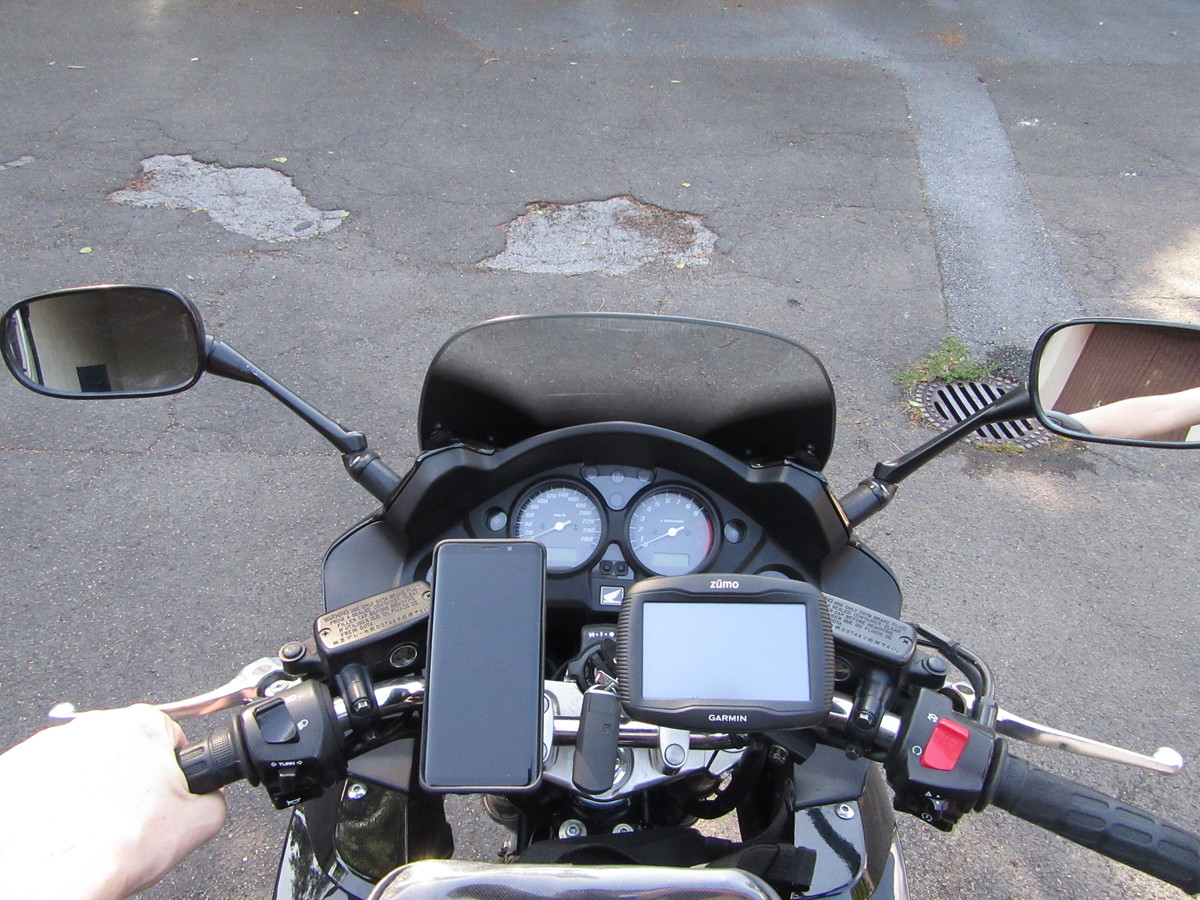 Handlebar at full lock to both sides - I was worried that the phone would hit the tank bag, but everything is clear: 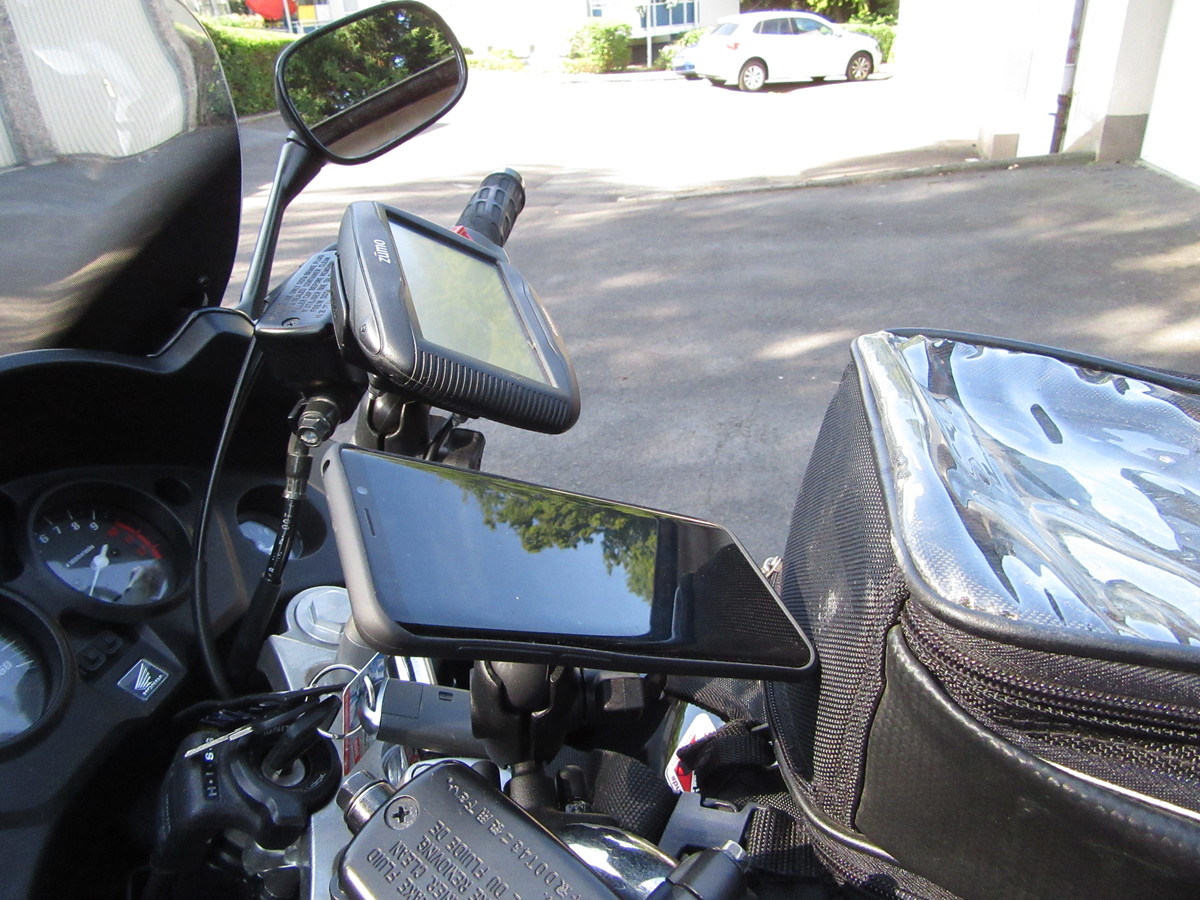 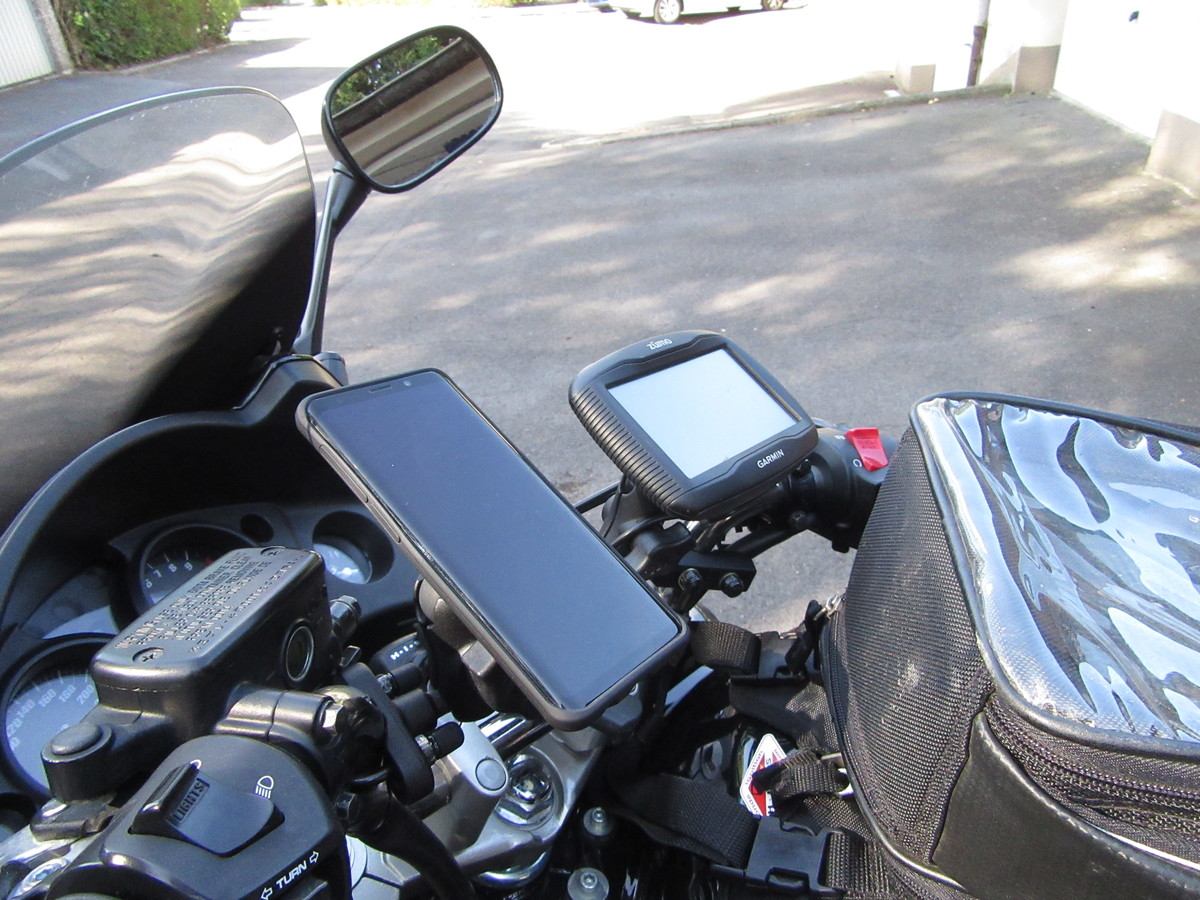 If it proves necessary, of course I can rotate the ballhead mount 90° to have the phone in landscape.

Power to the phone is necessary when it's being used as a navigation device, as I discovered on a test ride. Just streaming music to the helmet and logging GPS track drained the phone from 90% to about 35% in 2.5 hours. SP connect offers a QI charger for installing in the mount, but this will not be installed before the next lengthy trip (2020 FG roadtrip ). And then perhaps on my next bike, as I am thinking about replacing the CBF.
For now, having a power bank in the tank bag has to suffice.

This installation opens up the possibility for proper navigation when I don't have the dedicated GPS with me, which is quite nice. Mainly the purpose is to try out navigation via phone, because I honestly don't want t dedicated GPS on my next bike if a phone proves to be a good alternative.

I've put it up for sale. Not in a hurry though, and I don't really expect to be successful now in early winter. Or even next spring, I I'm being honest - there are quite a few CBFs for sale and mine doesn't stand out - except if someone wants one with cases and a GPS. Wish me luck.

Best of luck- selling bikes always sucks. What's your plan for a replacement?

Something almost as boring, but lighter, much more modern, a bit more powerful and therefore hopefully faster.
I'll tell more when the time comes.

.... and the CBF is gone. Just sold it to a guy from the next town. I'll be visiting him in the next few days to remove the mount and cables for the GPS unit (and to take my lovely licence plate with me), because he didn't want to have that. Ah well, that means I can sell that separately for a few € or put in on my next bike.

Figured out what you want next yet?

An idea, yes. But I will ask the FG hive mind to come up with alternatives; expect a thread over Christmas or so.

But now, time for some stats.

I've had the CBF for eight years, seven months and 24 days, making it the longest-owned motorized vehicle of mine, only surpassed by various bicycles.
I've ridden it for just shy of 26,000 km including two roadtrips (Alps and Balkans) which amount to about 6 to 7,000 of those.