The interior is probably the best part of this particular car. The seats need a good cleaning though to bring them back to their proper beige, 20 years of arse dirt is pretty noticeable.

Yesterday's task was fixing the indicator stalk, which would not stay up on a right turn.

The cause for this is the wearing down of small ridges in the metal inside the switch. The remedy is to pull the switch apart and grind the tiny grooves a little deeper, so the stalk will stay in place.

This was fiddly and awful. The switch was never designed to be pulled apart, so I had to drill out rivets and reassemble it with glue and a cable tie. Once inside the job was easy enough, just carefully grinding away with a Dremel. Putting it back together was the hard part.

On the first go, I had fixed the original problem, but I had created another, as the high beams were stuck on. So I pulled it all apart again, and fiddled away some more. Second time, the blinkers work, but the high beam is hypersensitive, so the lights flash like mad whenever you try to indicate. Third time, I got it right. But now the indicators will only self cancel occasionally. But I can't be bothered to pull it apart all over again. The most annoying part was that I couldn't just plug the switch back in to test it, I had to screw it all back into place as the earth went through the screws and the mounting bracket. So it was incredibly fiddly and time consuming, but at least the most glaring problem with the car is finally fixed.

Another fill up, a fresh tank of the finest and cheapest 95 octane in all Wollongong and it returned 9.76l/100km on the last tank. That's for mostly stop-start driving and the odd motorway jaunt but no particularly long trips, so a huge improvement!

Picked up a second hand badge to replace the bonnet badge, it's not perfect but pretty fitting with the age and better condition than the rest of the car. Plus it was only $12, better than the $50 the Saab breakers was charging for decent used badges. 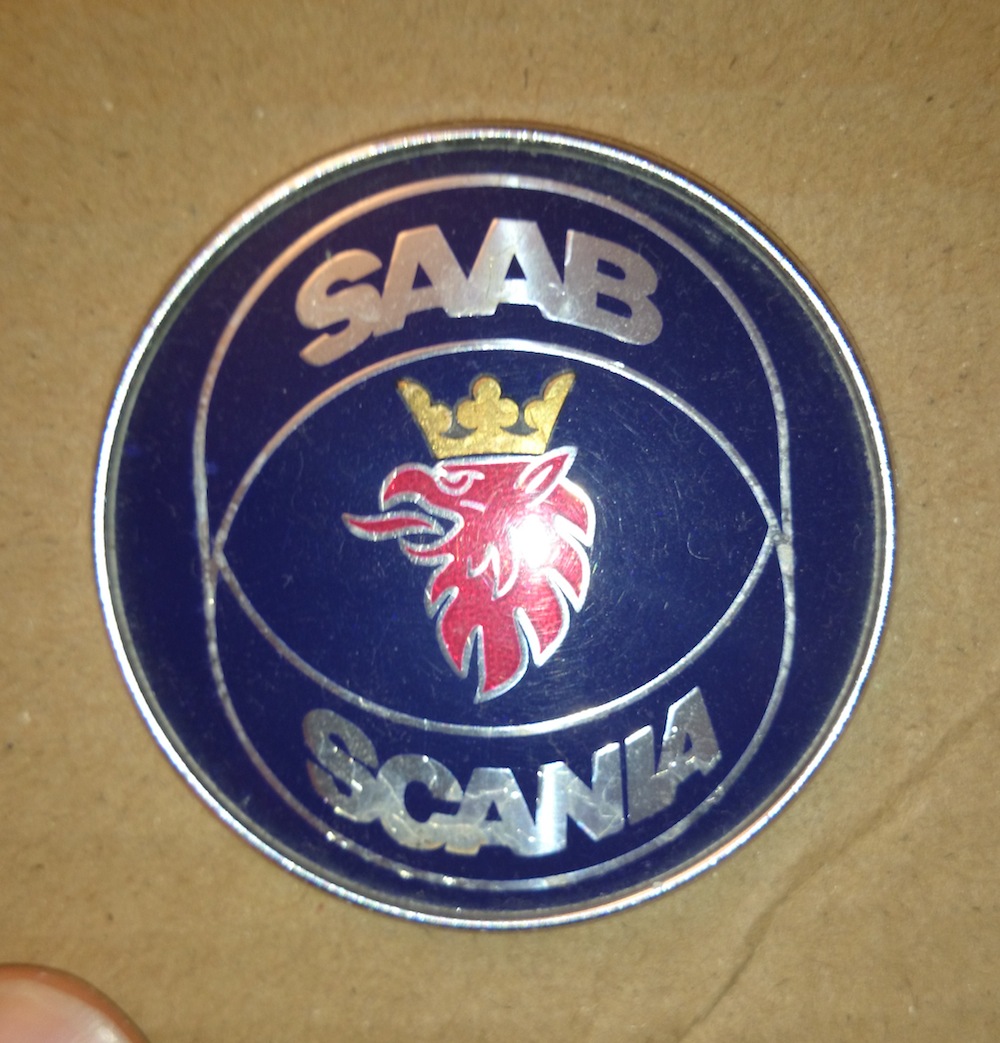 Started on painting the new bootlid too. This was a while ago, it's since had a topcoat applied so it's the right colour, but needs some touching up and clearcoat. 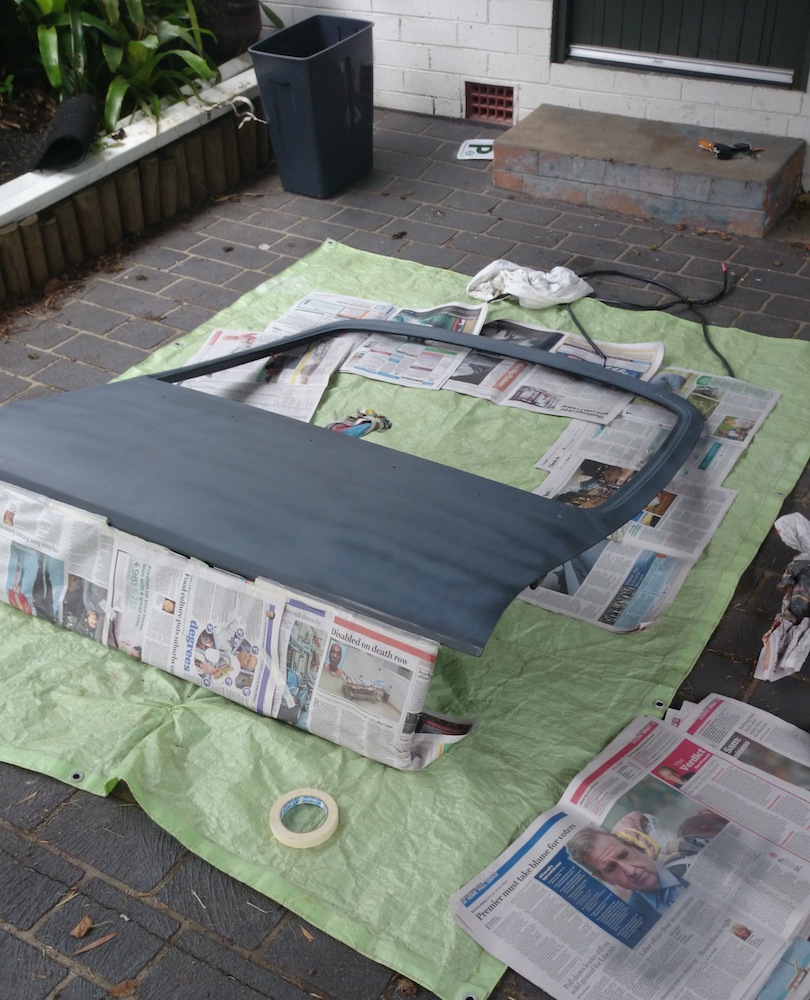 It's all a home made job so it's probably going to look pretty shite... Only time will tell

Having said that it's turned out better than I expected so far. Might even do the bonnet too.

Yeah, practice makes perfect or so on. I haven't painted any panels on any of my cars yet, time will tell if I'll have to. Wouldn't even dare to do the welding on my doors, though.

So it's nearly done, and looks pretty shit. I've been battling with rain nearly every day so it has taken ages too. I'm going to give the clear coat a light sand back before another coat just to smoothen it out a bit, there's one significant run in it that's annoying me. But not enough to start over again. Screw that. 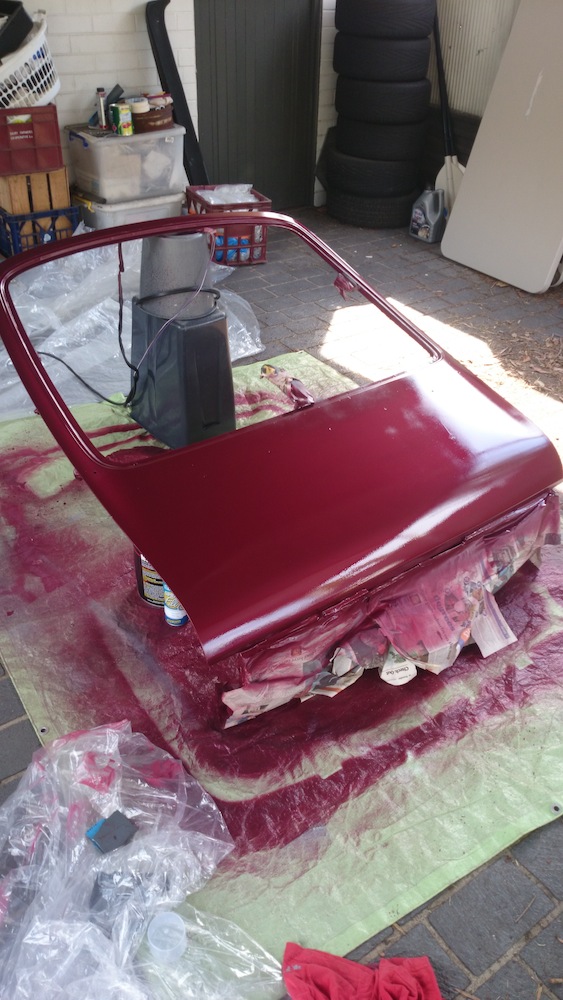 Once it's done I have to find someone to put the glass in it and put it on the car. Then it's up for sale. Anyone want it?

That's not bad really, but I think I see the run. Will sanding help it a lot?

It looks a bit worse IRL. The finish isn't very smooth at the moment so I'm hoping a once-over with 2000 grit will flatten it out a bit. Whether it will fix the run is another question. But I may as well try.

I changed the oil again today, added some tappet stop noise additive and fit the new PCV breather fitting in the valve cover. The old one didn't sit right and had some oil seepage, and likely caused a slight vacuum leak too. Could just be a placebo effect, but the car feels so much better. Really not bad to drive now. The engine really pulls strongly for a 21-year old N/A 4 cylinder of an even older design.

Visually, IMO, it's a big deal thay yours also has the small spoiler on the front bumper. In my opinion OG 900:s look a bit jawless without it.

I agree, I like the lower spoiler. I think this car looks best from front-on. It actually has a quite sleek and menacing stance from that angle.

There's a white one of these I see often at uni that has the Aero body kit, I like the body coloured cladding and the ducktail spoiler in my 80s fetish kind of way but I think this one with the standard bumpers and sans cladding is the purer design.

I've looked at the Airflow and Aero kits too, but hardly any were available for the five-door Combi Coupe. But yes, the stance is excellent from the front 3/4.

Someone egged the car last night. I got home from work at 2230 to my neighbour telling me that some kids had come past earlier in a drive by situation. So in the middle of the night I washed it under the glow of the Renault's headlights.

I've only just gotten home now today and it's pretty bad. Even though it was still fresh when I washed it off, the egg has stained the drivers door badly with runs and chipped the paint in many places.

In the words of Alan Partridge, they're scum. Subhuman scum.

Who does that? I don't think it's even a thing here. Is it worse on your paint than bird poo? 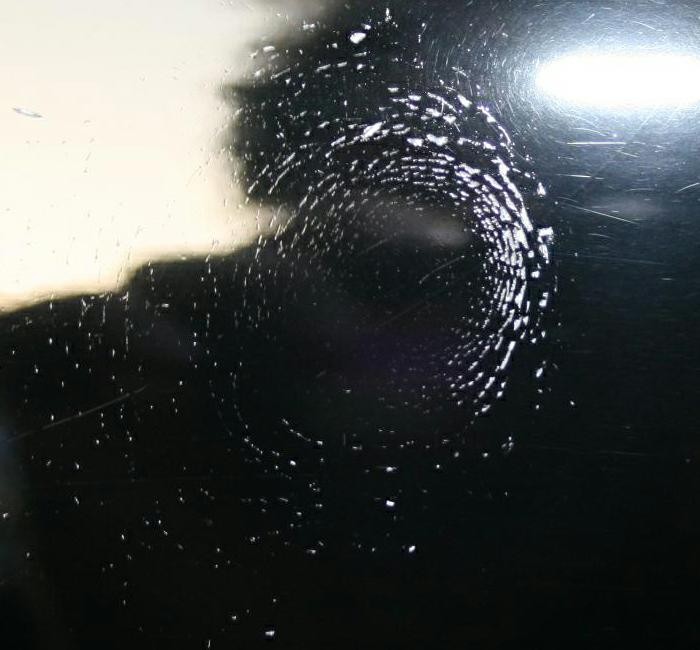 Oh, far worse. Egg is like instant staining, bird poo at least needs to bake on for a while before it takes its toll. Plus the egg shell can cause chipping when it's thrown hard, as what looks like has happened here.

At least it wasn't something some kids used to do when I was younger, they took egging one step further. It was called schnitzelling, and it involved an egging but then also covering with flour and breadcrumbs.

What? What the hell? Egg and flour?

Kids come up with interesting ways to entertain themselves when they live in a satellite city with nothing to do. 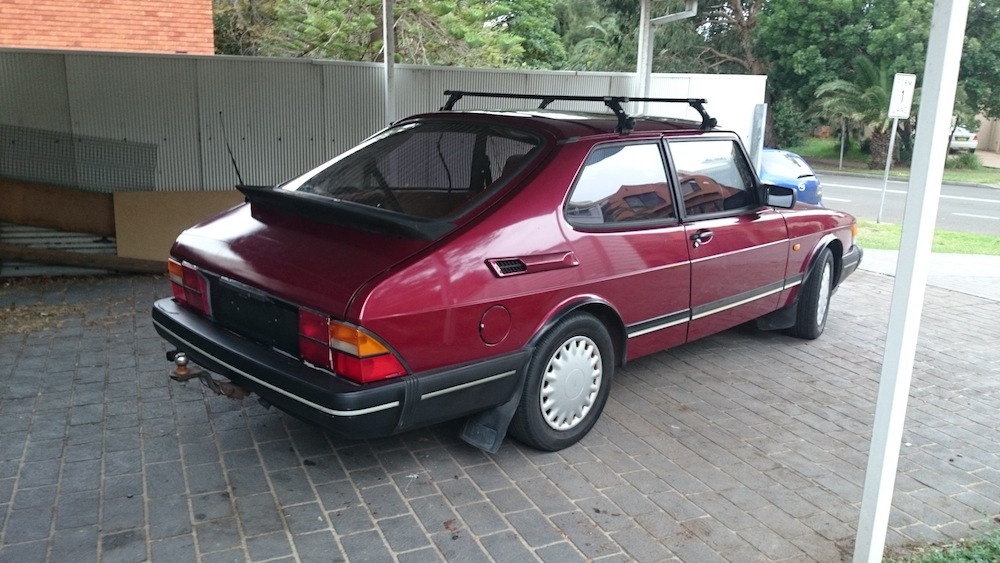 Finally got the new hatch on this morning with help from some friends. I haven't wired it up yet, but I've swapped the lock mechanism and everything else over and should work. The paint colour is a good match, from a distance you couldn't tell it was an at-home job. Up close it's fairly obvious but not so much that passers by would notice. It still needs to be buffed to finish it up but after that it should be good to go. 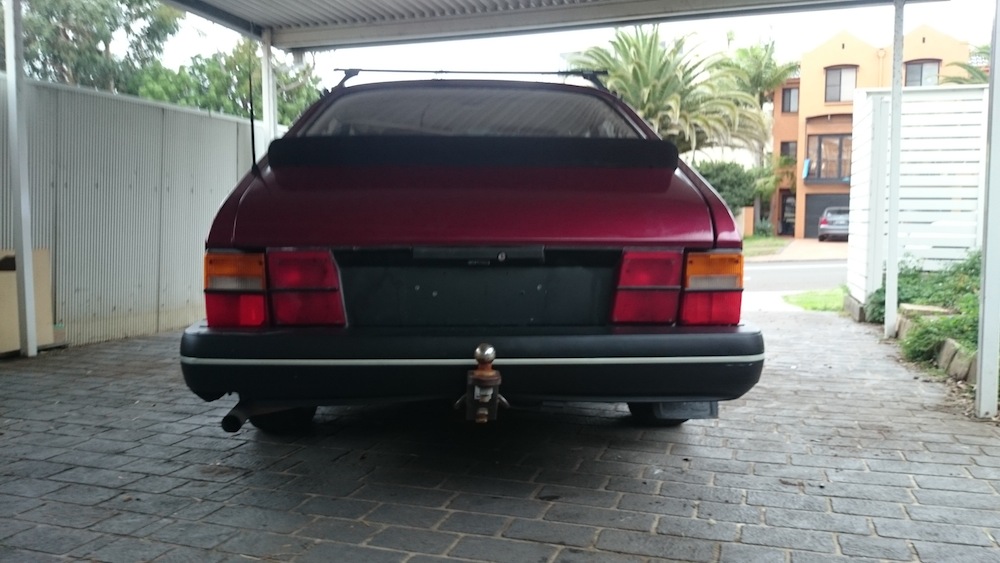 I like the debadged (and de-number plated) look. Makes the car look almost sinister.

And the reason why I needed a new hatch: 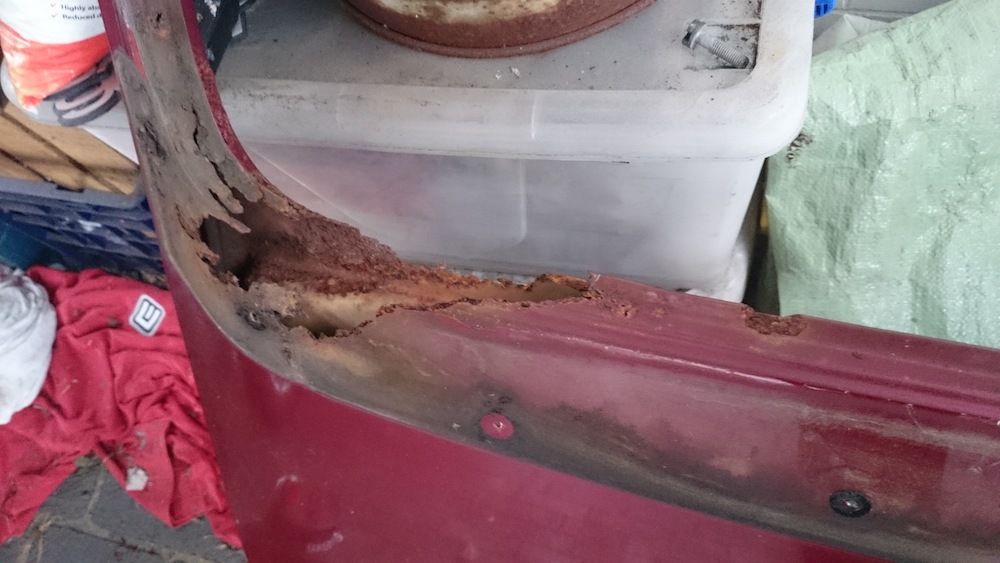 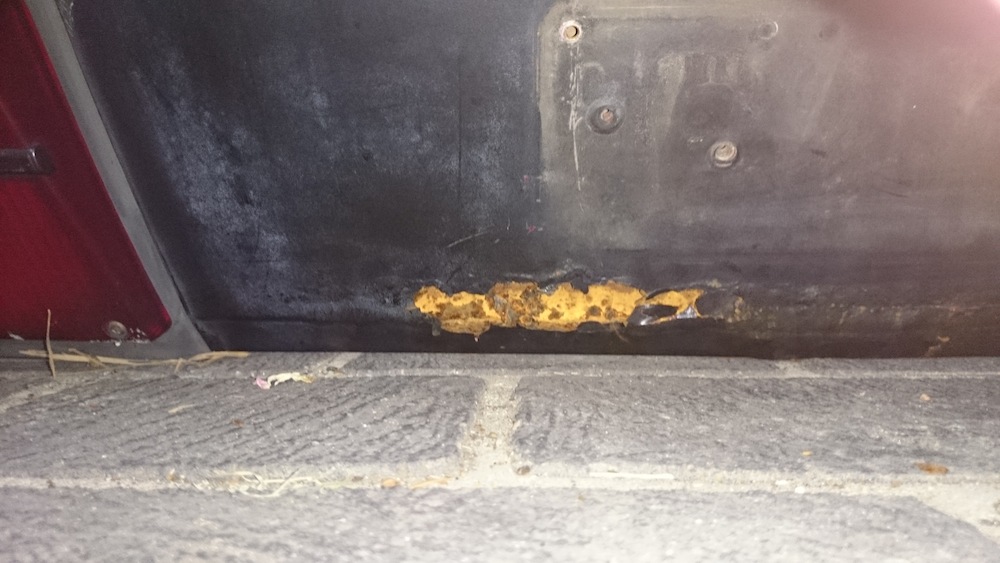 Should have driven around with this for a while 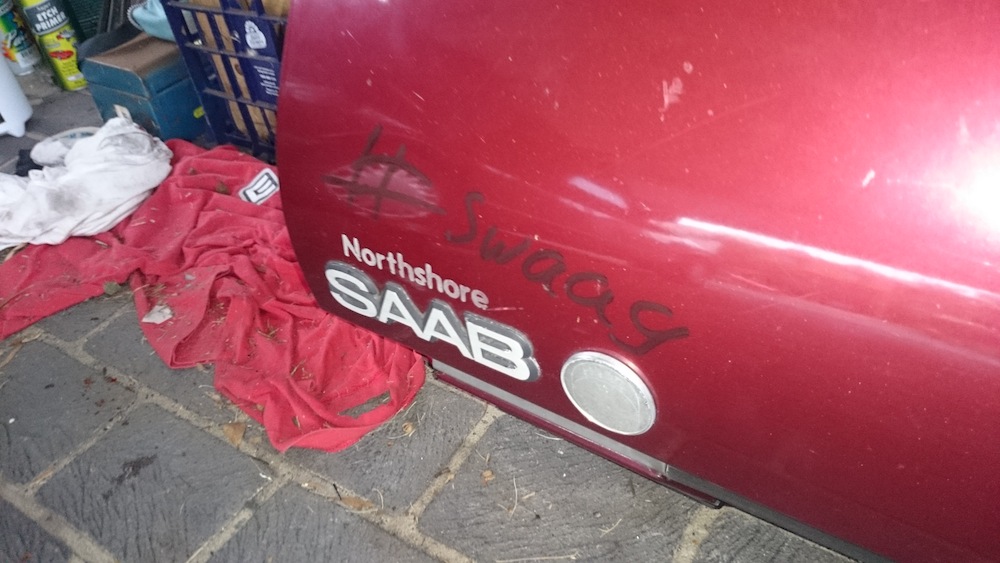