Quite a boring one. Nothing that really bothered me but do I remember something of it say one month from now? Maybe not.

I enjoyed it, but I wish they would have all used factory stock cars in the main film, rather than tuner stuff.
H

Thought the Detroit feature was a bit bland if I'm honest and they perhaps could have done a bit more with it.

Didn't really care for the drag race at the end either but I'd probably take that every week if it replaced the guest segment.

I kept waiting and waiting for them to have at least a somewhat serious, in depth discussion about the 3 muscle cars and it never happened. Then I realized these aren't serious cars... they look like they were transposed from a comic book. The only one I would ever even give a passing consideration to is the 'stang and unfortunately they completely botched its front end.

I enjoyed it no expectations, it is what is three middle aged men cocking about and falling over.

Enjoyed it more than I expected to after the really lame finish to the last run which was, quite frankly, embarrassing to watch.

HD isn't doing May any favours and he seems to be ageing more quickly than either of the other two but he's obviously too much of a bloke to resort to Botox, poor fella.
WillDAQ: To use the technical terms: "the Mustang is to aerodynamics what horse shit is to fine dining"

I think it is fine. It is not their best. But it is a honest works. No extra stuffs that is padding the time. Is all three of them try to do something automotive related. That is the show all about it.

Soild, but somewhat bland, especially for a first episode I think. These used to be a little more, um, fancy with a great race or something along that line. Also, I personally find the Senna´s design hideous and wouldn´t have used that bit for the first show because apparently quite a few people feel like that. Very happy to see the celebs not around anymore, more time for the good stuff. Conversation street wasnt bad either, yet it´s nothing I remember a few days later. Probably the lads need some practice to get up to speed again, so that´s all well and good. Pun well intended. Loved the city and the idea with the muscle cars, yet it all felt somewhat stiff.

What´s the most telling for me personally though: I got home quite late the night the episode came online and watched it until I decided - very uncommon for me - that half an hour more sleep is worth more than finishing the episode. That´s either me getting old (like James´ teeth, crikey!) or the episode being somewhat average, despite best efforts. Looking very much forward to the next.
H

Solid from me also. Some funny moments (dig at hammonds crashes) although I do wish they went into more depth over what happened to Detroit. My other half wanted to know so we had to youtube it.

Cars cool but also incredibly impractical (woa 3 Mpg?) and in any other country would send you broke with the fuel bill.

The Senna lap around the ebola drome was pretty amazing.

One of the best GT episodes yet. Happy to see no celebrity segment.

It was okay, more of the same stuff, moderately entertaining

Solid stuff, I liked the visuals. Jokes didn't feel too forced neither.

Blindspot said:
I kept waiting and waiting for them to have at least a somewhat serious, in depth discussion about the 3 muscle cars and it never happened. Then I realized these aren't serious cars... they look like they were transposed from a comic book. The only one I would ever even give a passing consideration to is the 'stang and unfortunately they completely botched its front end.
Click to expand...

I know I don't like those lights in the grille! I had a go at removing the end sections entirely. I think it helps a lot. 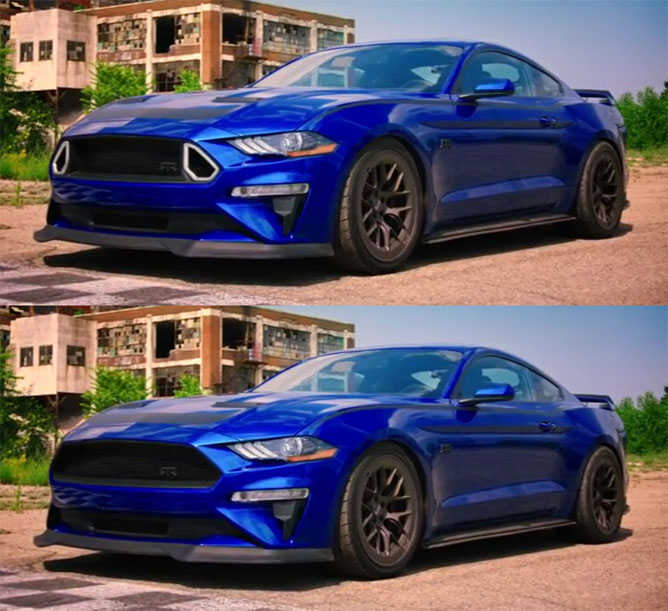 It was a pretty decent episode. Good cars, good enough challenges, the usual banter but maybe some of the "jokes" were too lame (driving over vegetables, spoiling Jeremy's lap... not funny). I wish they concentrated more on the cars and the locations rather than desperately trying to make the audience laugh. But it was good enough that I watched it more than once and may watch it again in the future.

However, out of all the season openers so far, this was the weakest. It doesn't have the punch of the original Holy Trinity episode or the excitement and variety of cars from season 2's first episode. I am glad, though, that they got rid of the celebrity segment as I feel that has run it's course and it's time to stop. I'll rate it 8/10.

Edit: forgot about the Senna. It was a good review but not anywhere as good as TG's P1 review. You see? That's the thing. Same presenter, same producer, same filming and editing crew for both shows and yet the Top Gear video was just somehow more epic. Anyway, nice to see the Senna top the lap board but that was kind of expected. This episode also marks the first time a Koenigsegg has featured on Grand Tour, although only in background.
Last edited: Feb 22, 2019
You must log in or register to reply here.
Share:
Facebook Twitter Reddit WhatsApp Email Share Link
Top