In the first of a series of feature length Specials, Clarkson, Hammond and May take a one time only break from cars and set out on an epic journey across Cambodia and Vietnam…in boats. This adventure packed voyage sees the hapless trio experience thrills, spills and genuine danger as they try to navigate their way through the world’s most iconic waterway – the Mekong Delta.

... And it was bloody brilliant! It's good to have the boys back. And the final words were funny as hell 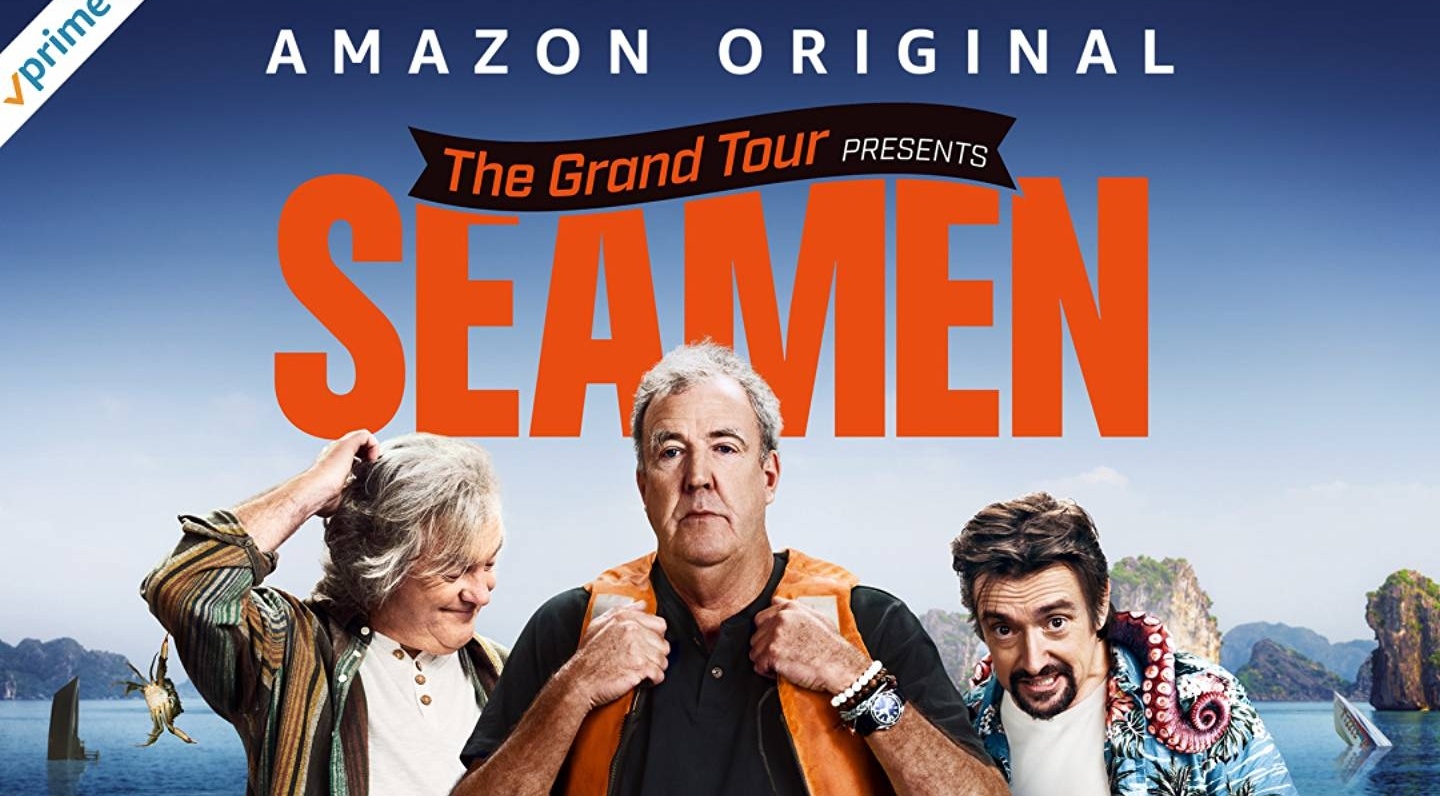 Not GT, more like a Mekong River with Sue Perkins knock off.
Team Black Jack

Special Seamen you say?
Where are we going and why are we in a handbasket?

It is not very good. we want to see all three together do something . This is pretty bad

A few things I noticed:

- When Clarkson tried to go under the bridge and bent the radar antenna, he claimed it broke the satnav. His "navigation system" was an iPad, you can see it in a closeup shot earlier. It has all the GPS gubbins built in, obviously. Not sure if the radar antenna is real or fake.

- May claimed his boat had a "99hp four cylinder diesel" but they dubbed over the original Yanmar engine sound with a silly 1-cylinder diesel thump to make it sound more vintage or whatever. You can hear the real engine when he's messing around trying to pick up the pillow.

- Every person that's spent any length of time around boats has had to turn around and go recover something that blew off. These things happen. A pike pole is one of the most important tools you can have onboard, and not just for picking up that pillow. It's also absolutely necessary when mooring.

- I was really surprised to see that May's boat was a Petterssonbåt, named after its Swedish inventor, C G Pettersson. They're beautiful works of art.

- What the hell are they doing going out in any kind of weather in an open boat? Get something with a roof, for christs sake

- Clarkson claimed he installed an air conditioning system, but what he really did was, I think, put the inside unit outside and run the big white exhaust hose into the cabin. Turn it on and you'll extract heat and moisture from all of Cambodia and feed it into the sleeping cabin. Unless the AC machine he bought has a reverse gear of sorts, of course.
Last edited: Dec 13, 2019

Clarkson is making a different film to the other two.

You're just sandy because they made fun of Corbyn! It was a pretty funny episode.
"Men with guts attack those corners!" - Keiichi Tsuchiya
2018 Ford Fusion Sport 20-present

I enjoyed it, there were a few Laugh Out Loud moments, interesting moments especially from Clarkson regarding the PBR and the fact that they took themselves totally out of their comfort zone.
M

I remember why I stopped coming to this site after I decided to check in, some people are just never happy and hate on what ever the fuck they do. Leaves you wondering why they're fans in the first place.

mattyp said:
I remember why I stopped coming to this site after I decided to check in, some people are just never happy and hate on what ever the fuck they do. Leaves you wondering why they're fans in the first place.

I like what they do, but this wasn’t my cup of tea. Maybe because seamanship is something I take seriously, like most people that grew up around boats.

I’ve enjoyed every episode of TGT and I’ll no doubt enjoy whatever they’re doing next.

I don't know, I thought it was good. They're doing something different while trying to retain the cheap car challenge big road trip style. The only thing I do have to say living near quite a large area popular with pleasure boating. Hammond's experience is not uncommon with speed boats. hardly anyone takes care of them because they can *just* afford a boat but not the maintenance and the "lol, we can't park boats" was cringey. Yeah, they probably don't know how but try to learn a little beforehand? The whole event in the river towns crashing into store fronts wasn't entertaining, not funny, nor scary...

After listening to Richard Porter on a few podcasts, I thought they were going to tone down the amount of sound effects? They wanted to make fun of James' boat but the consistency was off because you can't dub over 1920s riverboat sounds when James speaks so that whole "his engine is old and crap" fell completely apart when you could here the 4 cylinder buzz when he pinned it.

It was a fun and incredibly beautifully shot episode. At first I thought Jeremy was being intelligent for once with global warming and low river level but quickly noticed it was just there for a joke as time went on.

After people talked about this and were generally positive, I wanted to give it a chance and like it. But I didn't in the end.

This ep was pretty much a "standard special script" translated to them using boats instead of cars. But it following the standard protocol means that there was absolutely nothing surprising in it. It's just the same thing they've been doing for 15 years, and the running gags are not good enough to be still funny. Especially when the hosts themselves look and sound like they're running on autopilot.

And because they used boats this time, and I'm a sailor, their usual attitude of ramming into things carelessly or even on purpose, and their rude and sometimes downright dangerous behaviour towards other users of the waterways really disturbed me. The ending with (supposedly?) taking their unsuitable and ill-equipped boats through that kind of seas and wind was either a really big lie or they risked the lives of everyone involved, and not in the "let's go to the Arctic and everyone knows it'll be dangerous" way, but in the "they really don't know what they're doing" way. After sleeping over it, I do believe they faked their excursion into "open waters". And I totally don't get what they wanted to achieve with that.
Also, I don't believe Clarkson's crash on the river bank. He would have had a hard time getting out of that one still standing at the wheel like he supposedly did.

What really gets me is that it's obvious that these kind of films could be really great with just a bit of effort on the research and scripting side. Instead, we get another rehash of things they did well ten years ago, but now they're just going through the motions.
Last edited: Dec 15, 2019

It was a'ight. Hopefully there will be some land transportation in the next one. (the bikes don't count) Their misery near the end when crashing in the waves was palpable. Sure was a lot of needless reckless driving, though. The people/boats/buildings they were constantly crashing into didn't deserve that. And, of course, Jeremy's forced humor with the Vietnam stuff was pretty tired.

Most amusing moment for me was when Richard mentioned Hulk Hogan's show "Thunder" (even though the full name is "Thunder in Paradise"...maybe he was confusing it with WCW Thunder? Nah, probably not. But at any rate, he's right; you don't even need to watch it to know it was junk.)

5 overall. Interesting in spots, but nothing special.

it was better than i expected (although i have to admin i have very low expectations about anything those 3 make together)
i'm especially grateful that for once, they didn't have the urge to ruin each other vehicles
they were 50yo's on an exciting trip, not 50 yo's pretending to be 8 yo, and that was a nice relief

I found it entertaining. Not great, but no India Adventure either.

Yes, there was some tiresome filler, but there always is.

The heroics of PO1 James "Willy" Williams and PBR-105 as well as the other history lessons weren't filler, IMHO. They are true stories worth telling.

The scenes on the open sea were likely a bit over-dramatized, but I remember running into some heavy seas (a million years ago when I was Navy) and it was rough enough in a 130 metre, 3700 ton ship. In a 12 metre boat it would be even more exciting (if that is the word for it).

Quite boring. Was expecting more. 6/10