And guess what photo I saw in the Wagons, Ho! FB group as I was having breakfast this morning?

Certainly not this one.

That was taken back when the colony park was owned by my friends father and the country squire he owned wasn't T-Boned.

Had to replace the Y-Pipe because last Saturday, the welds around the flange closest to the camera broke. I've had the part since spring and I've been putting it off. I jacked it up Monday and attempted to cut the bolts. Turned out that I could not reach the bolts easily because sawzall. So I borrowed my brothers angle grinder yesterday and finally finished it. New grade 8 bolts and some muffler clamps and were good. The old y pipe had some sealer as a rudimentary gasket which worked ok surprisingly but, I decided real gaskets were better.

So, the only leaks I have now in the exhaust system is the original repair I did with the over the axle tail pipe. Usually with these pipe clamp jobs I do I put the red high temp sealer since it flexes better than the gray exhaust sealer. I could hear the leaks when I put my hand over the exit so I know where it is. I just need to fix it. Hopefully, after all this I can finally open the rear window and not gas out my occupants.

Also, I found the piece that was making the wagon sound like a pile a junk when going over bumps. A heat shield that's supposed to be tack welded with the bottom shield had broke and was rattling around. It's been a huge annoyance since I fixed the rear rattling (turned out to be the spring boot on the old load helper shocks) this spring.
Last edited: Oct 2, 2016

Dropped the beast off at a mechanic my family uses for the massive coolant leak I've been dealing with since I bought the car. Here's what the mechanic found:

Coolant leak by the timing cover (knew that), leaks by the water pump, leaks at the thermostat and leaks on the radiator. He mentioned that since they're in there, a suggestion was made to replace the timing chain as well as the gears. Since it's only $50 extra, i figure why not.

I knew it leaked but, damn.

I got a gift from my mechanic!

The infamous nylon timing gear... Though this is the later version that is an overmolded steel gear.

I'm guessing the idea was it would be quieter than an all steel gear?

That was the idea. I have an all steel one in now and there's no difference in noise at all.

Great thing is, is the rough idle after a warm start up is gone! My flareside also had that issue and I figured it was either dirty in some air passageway or some sensor was reading the air/fuel mixture poorly. Guess it's timing.
Last edited: Nov 18, 2016

Yeah, that was the idea but it didn't work all that well. When it was new the nylon did do a better job of noise absorption but 1: The nylon very quickly became bakelite and stopped being so quiet and 2: The rest of the 302 is so damn noisy it didn't matter in the first place.

It'd be one thing if it were as mechanically quiet as the old Jaguar XK series inline six where you can actually hear the timing chain quietly tick over the sprockets and the loudest single noise at idle is the injectors firing, but the 302 isn't. There's so much noise coming from a 302 that it all runs together. The timing chain noise the nylon gear was to reduce really would not have made a significant difference.
Last edited: Nov 21, 2016

I don't think nylon gears were ever really gone to because of noise issues. Like Spectre points out, the engine is generally making enough noise for you not to notice a difference. The real reason is cost. When you build one engine the price difference is not a big issue. But when you start building thousands of engines a month, the price becomes an issue very quickly.

With that being said, there are some timing chain sets that are noisy. Gear drives can be worse. But when you need a gear drive, you won't care.

Actually, the nylon coated gears (as opposed to the earlier all nylon with a steel drive insert) were more expensive to make, not less. Detroit's stated reason for making them was noise.

I think the noise reduction they got was wasted money then.

Wouldn't be the first time.

While driving a week before Christmas, I heard a ping and a sound like some sand or gravel fell and bounced against the floor and a fun exhaust leak was heard. I originally thought I lost a bolt on the Y-Pipe I put in. Once I got home, all was well. Other than a big leak between the gasket on the passenger side. Now that I've changed the gasket and still had the leak (I suspect my poor attempts at grinding the surface flat after booger welds screwed up the surface is the issue) and I gooped exhaust sealer around it, the noise was still there. Thinking back, earlier in the spring, I gooped exhaust sealer over the air injecting port that was since been cut and removed is the culprit, think roughly a touch smaller than a dime. It's clearly coming from the cat areas. Manifolds appear tight and sealed, no carbon around the heads or spark plugs/wire boots. Once it's warm enough again I'll dig into it.
Last edited: Jan 5, 2017

The claim if I go to dual exhaust, if I get the Lincoln Town Car's exhaust manifolds (AKA: Lincoln Logs) of the same era, I could see a noticeable power bump. Actual power is debatable. Since I don't have a welder and pipe bender, I will most likely send it to either one of the many custom shops or a nearby discount muffler. Only reason for using the lincoln manifolds is because they're lighter and still have the O2 sensor bung on the end of the collector. Hopefully upsize to either 2 1/4 or 2 1/2" because it's all 2" currently.
Last edited: Jan 5, 2017

Just scored a wing (diffuser?) for the roof rack. Now I have to get it home and I'm in Massachusetts... UPS Store it is.

Air deflector came a few days ago, got around to putting on Thursday. 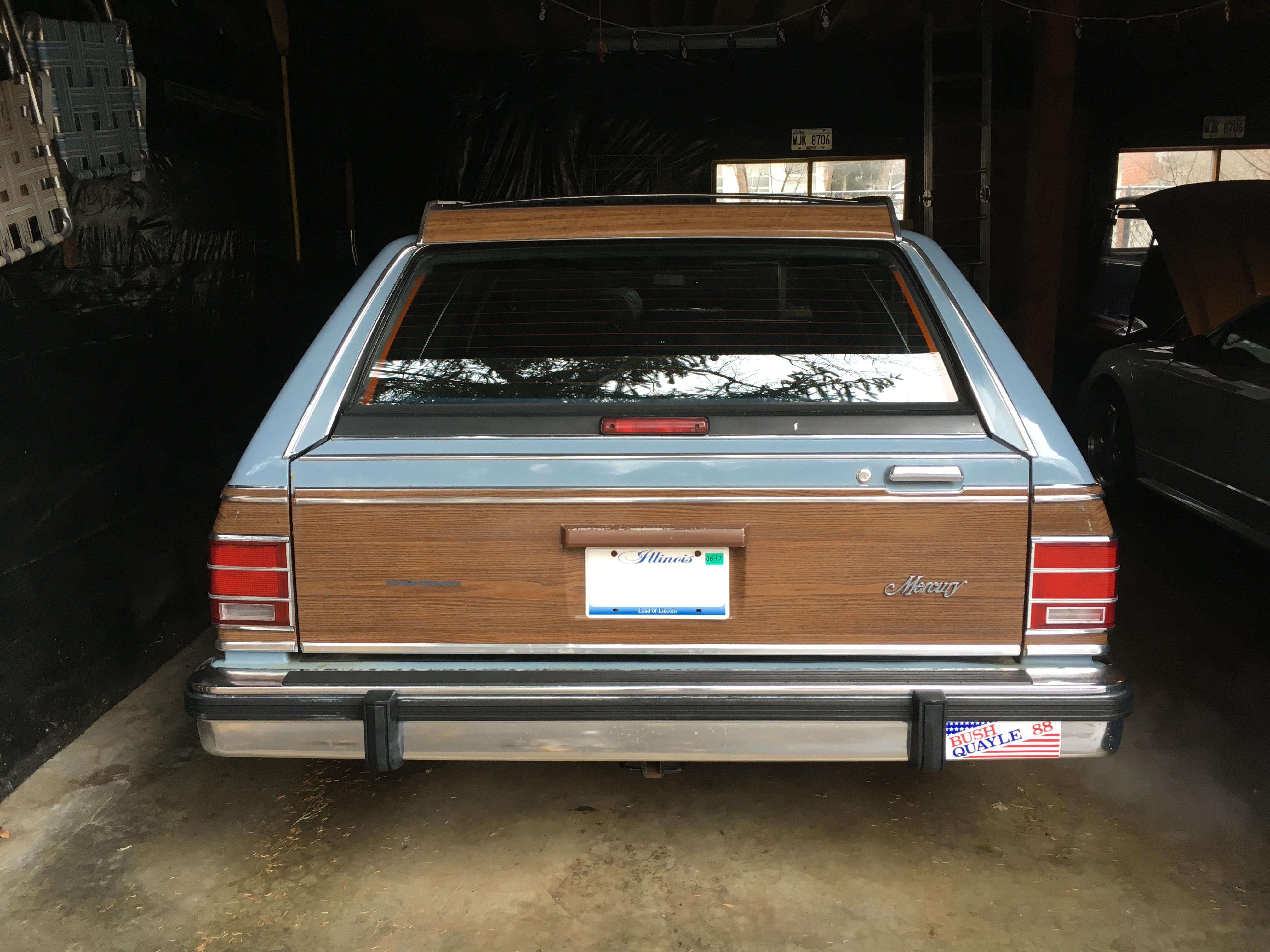 Looks good! Now the dust will be cleared automagically...

Love the sticker on the bumper. Has that been on it all the time or did you stuck it on? It still looks so fresh. Period-Correctness rocks.
You must log in or register to reply here.
Share:
Facebook Twitter Reddit WhatsApp Email Link
Top