I couldn't enjoy it because I noticed almost straight away that the windows on the 959 were blurred out and remained there on almost every external shot of the car. I guess because both cars are extremely rare/valuable that Richard had to take it easy when filming the incar shots, and that the owners drove their cars a bit harder for the other shots. Sigh.

The question is, did they look too far back for inspiration for this episode? Jeremy and James definitely turned to Season 2 for inspiration (James' film was very reminiscent of the GM HyWire film, only with added gravitas due to his moon series, and Jeremy did the Drive A Jaaaaaag Until You Get Bored test in an XJ). Richard's piece was pure Season 3 (viz. the Lambo and BMW M Series films then). Some may think this is a good thing. I don't necessarily believe that. To me, The Real Top Gear started with 04x01. What came before was the format still in the test tube.

However, maybe they've been taking our commentary over the last few series seriously, and they feel they need to go back to the test tube to reformulate a little. Let's hope they end up with something that's actually an improvement.
It is impossible to live in peace with fellow beings whom one believes to be damned...one must absolutely either bring them back into the fold or torment them. - Jean-Jacques Rousseau

The world's biggest dick can be found on a blue whale. And I thought it was on Top Gear. - Sarah Millican

This, to me, was the perfect TG ep. Not so much because of the content, but rather the format.

The content was still good, though.
- The Porsche&Ferrari youngtimers film was interesting, despite it being about Hammond and a Porsche. I particularly enjoyed them both breaking down at the end.
- The jag film was interesting too, from a Jezza vs. MacGuffin perspective (that should make you understand how biased JC is)
- Prescott was pretty charismatic and made for an energetic debate that was fun to watch. I can understand why there was basically no talk of cars at all. Prescott was starting to get into it and Jezza just went "yeah..."
- The Lunar Rover film at the end was pure nerd porn, I seriously almost shed a tear for the old buggy at the end.

Even the news were entertaining for a change.

I hope they figure it out that TG works best when it's in this format. After the first couple of films I thought "oh no, it's ending already, how did it go so fast?" I was glad there was 30 more minutes to go.

With different content, I could easily rate an ep in this format a perfect 10.

Edit: after reading the rest of the thread, thoughts I forgot to put in this post:
- The concept car bits are a nice touch, there have been too few of those in recent seasons.
- Cool wall bit was a nice surprise, but unfortunately the content was really forgettable. Yaris Verso? Really? And no "housework" on the current cool wall? Also, suddenly all Beemers are sub-zero, with no explanation? Sorry, they're just not. Particularly not the M3.
- Nice plug for the Senna film, that is the sort of stuff they should promote on the show if any. Didn't feel forced.
- Props to whoever finally decides what goes in an episode for putting in that NASA funding commentary. Reminiscing about the moon buggy is one thing but doing a disagreeing commentary on NASA funding cutbacks is seriously awesome.
Last edited: Feb 28, 2011
M-B 560 SEC 1989 | M-B 300 SEL 1989

Did anybody notice they used 2 different F40's.
Apart from the obvious giveaway of hiding the reg plate, if you look at the shots from the back you can see that the rear windscreen has 2 columns of slats in some shots and 3 columns in the other shots. The 3 column slats were not standard and i've only ever seen it on one F40. It was done to improve rear vision as the 2 column standard slat configuration didn't allow you a good view out of the rear and I should know as i bought that car with the 3 slats from the previous owner who'd had it done.
Whether the F40 in the show was indeed my old car or whether someone else had also done that rear windscreen replacement i don't know but i like to think it was my old car i was looking at (reg when i bought it in 1992 was F40 ROR) and it brought back wonderful memories.

thepres said:
Did anybody notice they used 2 different F40's.
Apart from the obvious giveaway of hiding the reg plate, if you look at the shots from the back you can see that the rear windscreen has 2 columns of slats in some shots and 3 columns in the other shots. The 3 column slats were not standard and i've only ever seen it on one F40. It was done to improve rear vision as the 2 column standard slat configuration didn't allow you a good view out of the rear and I should know as i bought that car with the 3 slats from the previous owner who'd had it done.
Whether the F40 in the show was indeed my old car or whether someone else had also done that rear windscreen replacement i don't know but i like to think it was my old car i was looking at (reg when i bought it in 1992 was F40 ROR) and it brought back wonderful memories.
Click to expand...


The simple answer is they re-used a few shots from waaay back in Series 5 episode 2 where they also had an F40 on the show. The one used back then had 3 column slats in every shot. You notice this more on the HD rip of the show.. the old shots look slightly fuzzy.
Last edited: Feb 28, 2011

narf said:
...didn't MacGuffin test that XJLd and hate it?
Click to expand...

Actually I liked it and that's what I wrote. But I cannot really say why, because all in all it is not a really good car with lots and lots of small faults and not so good trim quality. I suppose that Jeremy had his Brit mode on, while testing it, or he deliberately overlooked some of the annoyances, because he had a supercharged V8 at his hands There was a tiny glimpse of what I mean, when he tried to use the iPod. It really took me some time to figure that out as well and the touch screen isn't very nice to use. However, I like its looks. From inside and outside.

The XJ L is indeed brilliant around corners on country roads, I also wrote that in my review, but an S-Class with the ABC (Active Body Control) is almost as good -- but more comfortable. Plus the Jag's steering feels awkward in city traffic. I also tried out the dynamic mode in the XJ but frankly it did nothing but making the ride more uncomfortable to me. Unlike Jeremy Clarkson, however, I tested the car on the Autobahn at up to 260 km/h on the speedo. That can also make a difference, as he was spared the part, when the Jag becomes annoyingly harsh and crosswind-sensitive at high speeds.

Oh, and the Jag I drove, which is the version most people will buy, was about 15,000 Euros more expensive, than the corresponding S-Class with the same level of gimmicks and gizmos. But yes, I liked the Jag. What I don't like, is motor journalists getting a crisis over it, saying it's the most brilliant luxury car... in the world... when it simply isn't that good.

The episode was what I would like to call "solid old school Top Gear". Good but not brilliant. Therefore I gave it 8/10.
Last edited: Feb 28, 2011
"If Liberty means anything at all, it means the right to tell people what they do not want to hear" (George Orwell)

Anonymous commented on this article

That girl behind Jezza is there every week!
Click to expand...

Has to be our very own he-he!

Austere said:
Hammond's piece on the 959 vs F40 was dreadful. "you can just feel, I mean I've driven, I've owned 911's from this period and this thing just feels so much more." Way to express your thoughts with words there, chief. He also clearly needed more time in both of them before filming began. He didn't need to confess that he was flummoxed by the gear changes in the F40 because it was clear. He's a motoring journalist that can't drive or write english well.

The rest of the episode was just the usual bollocks.

Austere said:
It was a joke.
Click to expand...

I knew you were going to say that.

I knew you were going to say that.
J 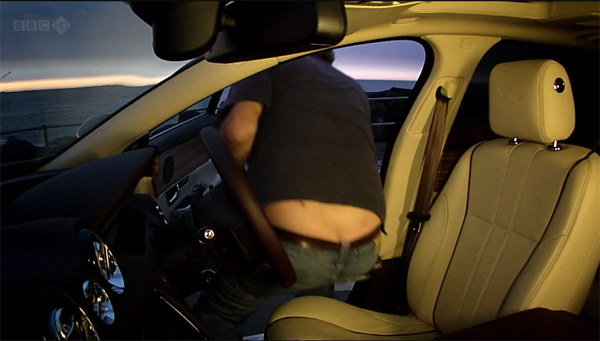 jstraw said:
So seriously...no one has a comment about this?


What the fact that he was on eco not sport mode...?
?Speed has never killed anyone, suddenly becoming stationary... that?s what gets you.? -Clarkson-
J

959 vs F40: Brilliant cars, fantastic moment very Hammond-ish too, the "dream car" stuff
News: one of the worst i can recall
Jaguar race: JC in a Jag racing against God...not epic but nicely done
SIARPC: skipped it instantly
Cool wall: a bit disappointing, really
Moon buggy: Very James-ish, but was like watching some of his moon shows, not TG at all. Still, could be worse...

I should of liked this episode. A return to the classic format, good. However the episode did not hold my interest I'm not a Porsche fan and that one Hammond tested was very ugly. The challenge was boring, May driving the moon rover was mild entertaining and I had no clue who the guest wasy so I skipped over it.
"The beatings will continue until morale improves".

That's just blasphemy! I hate 911s but that 959 is one of the most amazing cars ever made!

Samu said:
As I'm not a native speaker Jezza's whole "Cherry sex" joke went a bit over my head. Or was it even spelled like "cherry"? Anybody care fill me in, thanks
Click to expand...


They're referring to sherry, an alcoholic drink that seems to be associated with uptight, frigid people.
"Power corrupts. Lack of power corrupts absolutely."
-Redliner, ironically