Decent review of 17x06 in the Telegraph. Much better than the idiot who wrote the previous week's.

Whose moronic author also penned this stack of crap
http://www.telegraph.co.uk/culture/tvandradio/8668269/Top-Gear-is-turning-into-an-old-banger.html

If I can I may just obtain James Foxall's e-mail address or direct line. Gone are the days of me writing a letter and not caring if he doesn't read it.

the one thing this series missed (in my opinion atleast) was a special. i love the specials they're always interesting and funny. then again they do take a big budget and quite a bit of time so its understandable. i'd love for the guys to go to someplace exotic again ;D here's to series 18 being as good or even better ;D!

Trollbooth said:
Hamster is just bonkers thinking a Lambo that doesn't kill you is worse than one that does.
Click to expand... 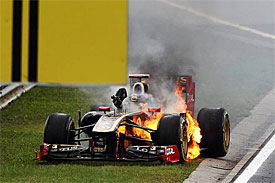 Straat said:
the one thing this series missed (in my opinion atleast) was a special. i love the specials they're always interesting and funny. then again they do take a big budget and quite a bit of time so its understandable. i'd love for the guys to go to someplace exotic again ;D here's to series 18 being as good or even better ;D!
Click to expand...

They've never done a special within the summer series. Specials are usually filmed during that time.

I'm going to suggest you DO watch it. It's not about production cars anyway; it's about a bunch of fucking awesome men doing something they consider therapeutic.

A great episode to close the season on.
Aventador: The fact that the Aventador is beautiful to look at, is crazy fast, and is 2.5 seconds faster than the 670SV is just mind-numbing.
News: Kind of boring and has been for the last 3-4 weeks.
EV Cars: This proves my point that EV cars are useless unless you're making the school run every day or going to the store to pick something up. Of course I've only ever seen one, but I would like to believe that's because I live in a state full of oil and natural gas and 90% of people drive a truck because of work or they're farmers.
SIARPC: Semi entertaining but I've never seen X-factor so I had no idea who this guy was.
Soldier Rally: By far the most engaging and touching segment I've seen on any show in a number of years. I really hope they make it to the Dakar and are able to finish because that would be my feelgood story of the year.

A bit slow but an enjoyable episode nonetheless. I'm really pleased at how much more composed it all seems compared to the past few years. This series has had a feel much more akin to that of Series 4 or 5. The news is relevant, the banter is natural and downright entertaining.

Also is this the first ever episode to feature two Richard films and nothing with Jeremy on his own?

Drummin003 said:
You must be the most cold-hearted bastard on the planet then. You skipped over the best part of the show and definitely the most moving/emotional part of the show in years. Go rot in hell asswipe.
Click to expand...

Fuck you and your retard emotions. With all the respect to those soldiers I came to watch a car show, not some sentimental tear jerking parade.

Nuieve said:
Fuck you and your retard emotions. With all the respect to those soldiers I came to watch a car show, not some sentimental tear jerking parade.
Click to expand...

5th gear is around here somewhere.

Then there's the US Motorweek.


That should fill your niche nicely.

Awesome episode. Awesome series. The blokes really renewed my faith in them with this Series. I can't WAIT for Series 18, but I'll be more than happy if a) it takes a long time to make) and b) there are as few episodes as this one, if it means the overall quality is this high. Bravo!

^ that.
Also, i cried like a child (but i think i still count as one) during the soldiers bit, especially when the guy started crying, and didn't stop until the end of the episode. I'm kind of moved forever now, i hope everything works out for them and they make it to the Dakar.

Nuieve said:
Fuck you and your retard emotions. With all the respect to those soldiers I came to watch a car show, not some sentimental tear jerking parade.
Click to expand...

Dude, motorsport always has a place in a car show, and those people are involved in a form of motorsport. So therefore your argument is invalid.
D

I thought the BBC didn't care for ratings because its funded by the television fee, not ads. So why is Top Gear off for bloody X-factor and bloody Cowell?

"Compared to some, it's only a flesh wound." Missing a leg.

Defcon said:
I thought the BBC didn't care for ratings because its funded by the television fee, not ads. So why is Top Gear off for bloody X-factor and bloody Cowell?
Click to expand...

It's not just 'cos of ratings. TG got its time-slot moved around a couple of series ago because of clashes with other shows, (not just the snooker!) so the ptb decided to move it to a new time of year to try to prevent that. It also helps with the filming schedule - November was getting a tad busy for the presenters; January was easier apparently.
Last edited: Aug 2, 2011

I see that many didn't like the guest, but he was alright for a non-petrolhead. His honesty about musical tastes and the industry was refreshing, and Jezza actually engaged the guest in conversation rather than just asking questions that lend themselves to mundane answers.


MWF said:
Much better than the idiot who wrote the previous week's.
Click to expand...

In his defence, 17x05 did have that Series 16 vibe of incohesiveness about it IMO. The "Top Gear is turning into an old banger" piece was also written before 17x06 aired, so perhaps it was his timing that was worse than the article itself. Granted though, he's flogging a dead horse.

93Flareside said:
How do british women make such a simple two letter word, into a two syllable word something? Please, someone who lives in the UK enlighten me.
Click to expand...

Simple - you invent a language, then proceed to eat it. The English have been doing it for years....

Gave it a 9, probably worthy of a 10 given the final segment - awesome stuff. Would have to be the most consistently excellent series of TG since, well, series 7. Bravo.

Lambo - Perfectly good segment, certainly a pretty amazing vehicle. Hammond's hyperbole aside, it is pretty easy to understand his and Jezza's point though. I know it sounds insane that making a sane car is an insane thing to do, but essentially Audi have replaced Italian soul with German reliability and functionality. Makes perfect sense in a day-to-day car, but who on earth uses their Lambo as a shopping cart? That and I have to say the Aventador's looks don't really do it for me. If I had the money (unlikely but one can dream) I'd want the new car's drivetrain and suspension in the body of a Countach, with a switch that turns it from AWD to RWD, for when I want to scare myself

News - Rather devoid of actual news - Merc have a new Black that's red? - but hilarious nonetheless.

Electric cars - Jezza and James are a good combo and did actually do a pretty much top job at reviewing the Leaf and whatever the other one was called. Of course they still came to the same conclusion that has been done a billion times already - that the moment you want to go more than 100 miles or so, you're screwed - without appreciating that most people who'd buy such a thing would be wanting a short trip city roundabout/eco-friendly showoff wank.

It is worth noting that current lithium battery technology is more than capable of delivering petrol-style fuel ranges (300+ miles), it's just the batteries themselves are bloody expensive at this early stage of production and consumer demand. Which is why the Tesla Roadster costs 100 grand (amongst other things) and the Leaf costs much less. According to Wiki, the Tesla's battery actually costs more than the Leaf itself.

I know Jezza and Co. champion hydrogen as the future but it is still very much in the future that it will become a viable option for everyday motorists - if it ever does. I'm convinced the solution NOW is a combination of plugin battery electrics - for short range, city based stop-start work - and biofuels for longer ranges. The plugin, biofuel'd hybrid is - in my mind - is the 'best of both worlds' solution and certainly most realistic option using today's technology. Saab actually had a biofuel compatible plugin hybrid prototype a few years back, but of course they've been too busy trying to simply stay alive.

For the remaining millions of cars already driving about, biofuel means they can continue to be useful in an environmentally sustainable way until they fall apart. Virtually all cars can be converted for a very reasonable amount of money (less than an LPG conversion). This way everyone - and not just those with tens of thousands of dollars to blow on new cars - can shift away from petroleum fuels. Anyway....

SIRPC - Never heard of the dude but he was fairly funny, certainly less of a cock than Simon Cowell. Plus he was trying to give away Botox vouchers. That's never happened on TV before, to my knowledge....

Soldier Rally - Fanfuckingtastic. No hyperbole, no false suspense, just simple and elegant and what a great bunch on guys. I really do hope they make it to the Dakar.

Ravenlord said:
Yes it was a nice segment, but what do you mean "back into the fold"?Ben was there as he's helping the Project Mobility team, not because of Top Gear.
Click to expand...

I think including Ben in the story was a very conscious choice in the edit. He wasn't really an integral element within the storyline and I believe they included him as a very deliberate act of bridge building.

It actually would've been easier to edit him out and no-one would have been any the wiser.

Nissan said the device also showed that Clarkson did not switch on the 'eco-mode' in the car which would have makes the car go further by slowing acceleration
Click to expand...

Top Gear executive producer Andy Wilman said: 'We never at any point in the film said that were testing the range claims of the vehicles, nor did we say that the vehicles wouldn't achieve their claimed range.

'We also never said at any time that we were hoping to get to our destination on one charge.
'We never said what the length of the journey was, where we had started from, or how long we had been driving for at the start of the film, so again, no inference about the range can be gleaned from our film.'
Mr Wilman said the consumer points from the programme were clear, that electric cars are still very expensive, re-charging infrastructure is patchy, the range varies enormously.
He said the Leaf was "a very good car per se" but said the battery, in Top Gear's view "remains the Achilles heel of the whole package."
Click to expand...