The GT3 is the primary track car these days - it's a shared car and handles us two drivers very well. The MX-5 will be taking me to work when I want to carry something the motorcycle can't take or when I don't want to deal with motorcycle gear. I'm still planning on putting a roll bar in it, and it'll likely see the track from time to time, but the GT3 is the primary track car, with the MX-5 being street focused now.

On Thursday, strapped to the trailer to tow it in: I haven't heard anything from the shop on it yet. My hope is that they have other cars to work on, not that it's taking them this long to break down the car and find everything wrong with it.

Good to see it back from the dead

Repaired and inspected, the Miata came to its new home today: The registration still needs to be updated, and it won't see any more street time until that happens. But I should have a chance to go sort out sometime next week. Zoom-zoom!

It went back to being my daily driver around the start of 2017. It's an older car now, and though it's low miles, it's seen a lot of very intense miles (track time, autocross, etc.). The paint and interior look like a maybe-5-year-old car, but the mechanicals show all of their 14 years, and some components are far more worn than age and mileage would suggest.

It started throwing a check engine light a while ago. I forget the code, but the meaning was that the coolant was not coming up to temperature as expected. This can be caused by insufficient coolant (and resulting air bubbles), or by a failed thermostat. Even with keeping coolant levels up the check engine light kept returning, so it seemed likely to be the thermostat. I'd also noticed the power steering fluid level would get low, seemingly without reason, and the clutch was slipping more than it should. I took it to a Houston area shop (a race shop that specializes in Miatas). They confirmed the need for a new thermostat, gave it that, and got a new clutch master cylinder put in to take care of the slipping clutch.

I was planning to have Brian of Regular Car Reviews get some seat time in my Miata, out at Harris Hill Road, to get more comfortable with cars at speed. A Miata is "regular" enough to not be intimidating for him, but gives a strong sensation of speed and is a good learning platform. I took the car out for a few shake down laps and... the engine failed. It threw a rod out the side of the block: 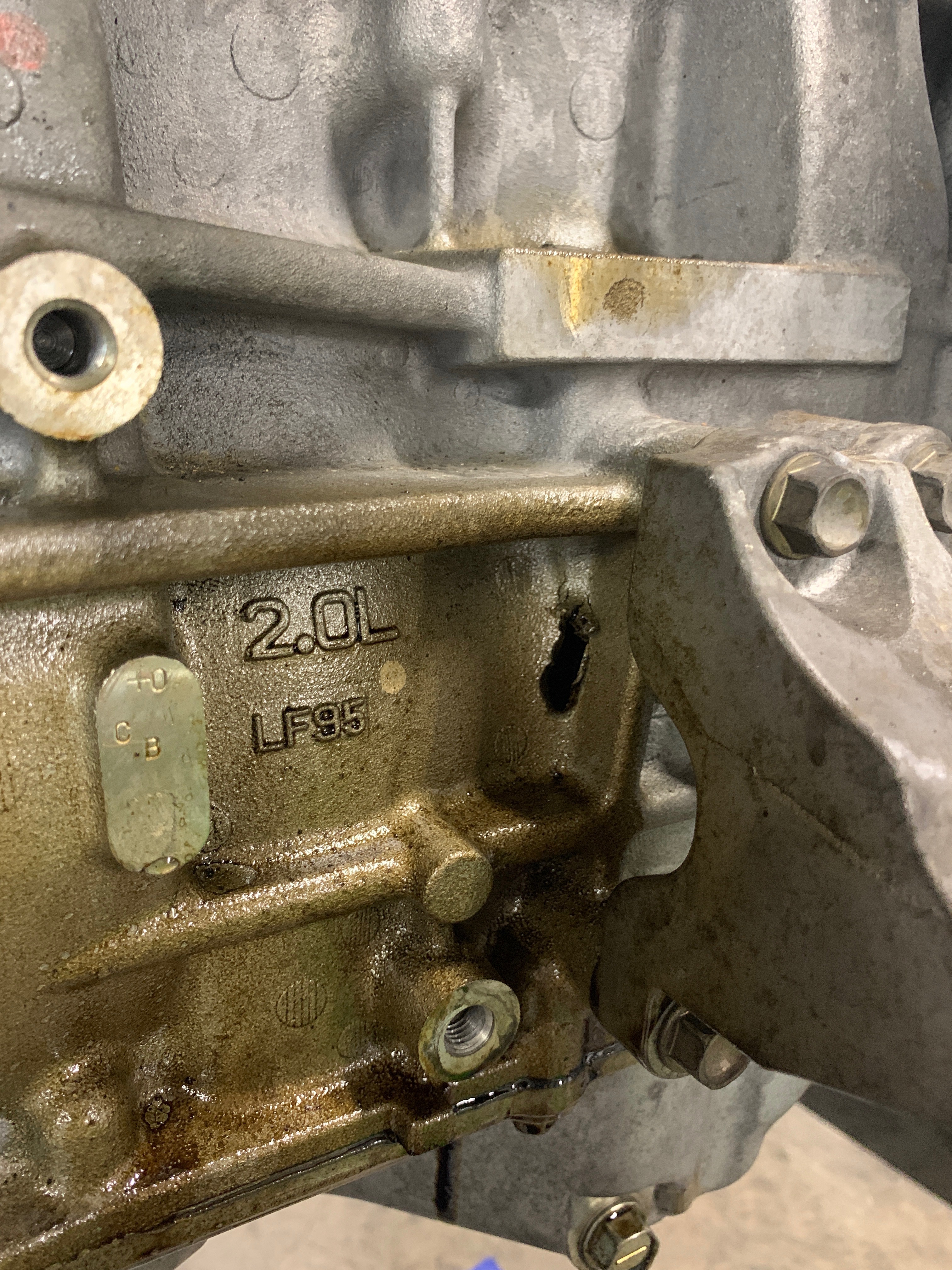 The guys at the track were kind enough to let us use their track Miata for Brian, so he still got to spend time on track in a Miata. John, my favorite Miata mechanic, works out of a shop at that track, so we left my car there for him to repair. He had a used motor (10,000 miles, removed to install a race motor), and put that in the car. All that clutch slipping from the master cylinder had caused the clutch to be worn down, too, so he got a new clutch in the car as well. I got the car back last weekend.

Monday morning, everything was fine.

Tuesday morning, everything was fine.

Thursday morning, the power steering was still intermittently stiff and noisy. When I checked, the reservoir was low yet again.

The reservoir level didn't drop as the car sat overnight Thursday -> Friday, but there were puddles of fluid under the car. We'd put down a pad Thursday night and come Friday morning, it had caught quite a bit of fluid in multiple areas. My guess is that fluid is spewing all over the frame, etc. while the system is pressurized, then dripping off overnight.

I still think of this car as "my new Miata". The car seems to be telling me it really is 14 years old, and that I've not been gentle on it, and the results are now being seen. I go back and forth between being really upset that this car with so many memories, that I feel so at home in, is failing on me, and understanding that old cars have failures and it's just time to fix some stuff. It's still an incredibly fun car to drive, so hopefully it can spit out all its old, failing parts, get new ones, and come back to me ready for more.

Are you still sporting the best license plate Texas had or have they forced you to use the newer boring black & white one?

Any idea what caused it to throw the rod?

93Flareside said:
Are you still sporting the best license plate Texas had or have they forced you to use the newer boring black & white one?
Click to expand...

I like the boring black & white one! That's what's on the car now. I might still have the old plates somewhere, tucked in a corner of the garage...


public said:
Any idea what caused it to throw the rod?
Click to expand...

No definitive reason. The motor that threw the rod is the second one in the car. It's been through multiple autocrosses, including Nationals, as well as a massive amount of track time. Pretty much everyone at H2R said I'd gotten more track time out of that motor than they'd expect, most saying I got about twice as much track time as expected. I'll take it.

The car is back, again. The power steering was essentially due to a fitting that just... gave up after all the heat cycles and difficulty the car's been through. Fingers crossed, it should be good to go now.
You must log in or register to reply here.
Share:
Facebook Twitter Reddit WhatsApp Email Link
Top