Car and Driver said:
In today?s ?Things Europeans Can Have but You Can?t? news, we bring you an update from Honda on the development of its next-generation Civic Type R hot hatch. Manabu Nishimae, president of Honda Europe, dropped a few juicy nuggets of info on the Type R?s performance potential at the 2013 Frankfurt auto show, and just as you expected, the hot five-door is shaping up to be rather epic.

For those who don?t know what the Type R is, think of it as a Civic Si on a handful of uppers. With five doors. (And a different platform from the Civic Si coupe and sedan we get here.) Actually, based on Nishimae?s comments in Frankfurt, it might soon be like an Si on a cocktail of uppers, meth, and . . . turbo. That?s right, Honda says the 2015 Type R will be turbocharged. On the upside, the direct-injected, 2.0-liter four-cylinder will produce ?at least? 276 horsepower. The downside, at least for ardent fans of Honda?s high-revving, naturally aspirated approach to impressive peak output figures, is that the Type R will be neither naturally aspirated nor likely to rev to eleventy-billion rpm.

Forced induction does not, by itself, guarantee an engine won?t rev high, though; we?re hoping Honda figures out a way to maintain the motorcycle-like zing that its high-performance engines are known for. The outlook is optimistic, based on a video Honda played at its press conference in Frankfurt showing a Type R prototype being hammered around the N?rburgring. It certainly sounded like it was revving like a proper Honda, and the soundtrack was pretty awesome. Moving back to the topic of the N?rburgring for a moment, Honda revealed one of its goals with the Type R is to snatch the quickest time (for a front-drive car) around the fabled German track. That?s probably not an empty threat, as Nishimae confirmed the Civic already is close to the record?and there?s still two years of development to come.

Despite showing a camouflaged Type R prototype, Honda?s press materials for the car do give away a few visual cues that separate the R from standard Civics. The first, and most obvious, is a gigantic rear wing. Below that, wicked-looking quad exhaust outlets reminiscent of the Subaru WRX?s setup jut out from the lower fascia. The rear quarter panels also feature odd little vertical winglets, which we presume were tacked on to aid the Type R?s aerodynamics since they certainly aren?t pretty in the traditional sense. Otherwise, the front fascia has the requisite gaping intakes and a giant splitter, and huge brakes with bright red calipers peek out from behind lacy, thin-spoke wheels.

The Civic Type R isn?t slated to hit customers until 2015, but if you live in Europe, we suggest you start getting excited. We are, and we won?t ever be able to buy this puppy. Now, if only Honda were to apply the Type R treatment to the unique Civic Tourer wagon . . .
Click to expand...

I prefer normally aspirated to turbos, but if this thing makes high revving Honda noises and is going to be THAT fast, it would appear that Honda may finally be awakening from their long slumber. Jeez, this thing might be nuts.

I'm still not sold on the styling of the Euro Civics. And it doesn't have a proper rear suspension like the Si we get. Hopefully they fix that.

It would be cool to see Honda do a Civic Type-R here in America for a turbo model, while still keeping the naturally aspirated Si model. I wonder if Honda is going to develop it's own twin-clutch automatic or not. As great as Honda does a proper manual, if they hope to match the performance of other hot hatches, it might be wise to develop something to rival the DSG.

I think we are starting to see the effects of Takanobu Ito being at the rudder of Honda. The guy was involved in the development of the NSX amongst other things, and seems to be more of a petrolhead than his predecessors.

I hope they do a 3 door hatch.

havocwreaker said:
I hope they do a 3 door hatch.
Click to expand...

They've said that that's not going to happen.
I'm probably getting older, but I would take the 5 door option (when avaliable) every time when picking hot hatches.
Help greyhounds find their forever homes.
http://greyhoundadoptionswa.com.au/

That's dissapointing. Every Type R Civic has been a 3 door hatch, if you discount the FD2R sedan that was Japan specific.

I'm of the opinion that hot hatches should be small three door things. Four door starts verging on what ought to be sedan territory. I know there's no really argument technically as the wheel bases are usually the same.

I have two greyhounds and used to drive a tiny 206 gti. Got an extra set of doors and wondered what the hell I was thinking all those years! I actually think the extra doors make them look like a BTCC racer.
Help greyhounds find their forever homes.
http://greyhoundadoptionswa.com.au/

Lucky ? On paper it looks nice, but hardly earth shattering stuff, or am I missing something ?

Meh, I'd still rather have a Focus ST or Mazdaspeed 3.
"The beatings will continue until morale improves".

Does anyone know the reason why the US doesn't get the Civic Type R? I imagine it would sell just as well as in Europe.

I don't think the US spec Civic shares any parts with the European model any more.
"The beatings will continue until morale improves".

Monkeyspunk said:
Lucky ? On paper it looks nice, but hardly earth shattering stuff, or am I missing something ?
Click to expand...

They're gunning for the fastest production FWD car on the 'ring. I'd say that's pretty impressive.

Plus, I have a thing for Hondas, having previously owned an EP3 SiR. Breaks my heart how beige they've since become.

What would you say makes a Type R Honda? I'd call it as the stratospheric redline and its willingness to get here.

jasonof2000 said:
Meh, I'd still rather have a Focus ST or Mazdaspeed 3.
Click to expand...

Depends on how good it is. The Focus ST is pretty damn nice, but the brakes aren't that great apparently and the fishy looking nose is not that attractive. The new Mazda3 looks awesome, so the Speed version should be pretty nice. Honda does do a pretty good job with cars like this. The previous generation Euro Type-R was the hot hatch to end hot hatches in it's time. Add some boost and it could be a real monster, assuming they fix the rear suspension. Until then I'd be content with a NA Civic Si. 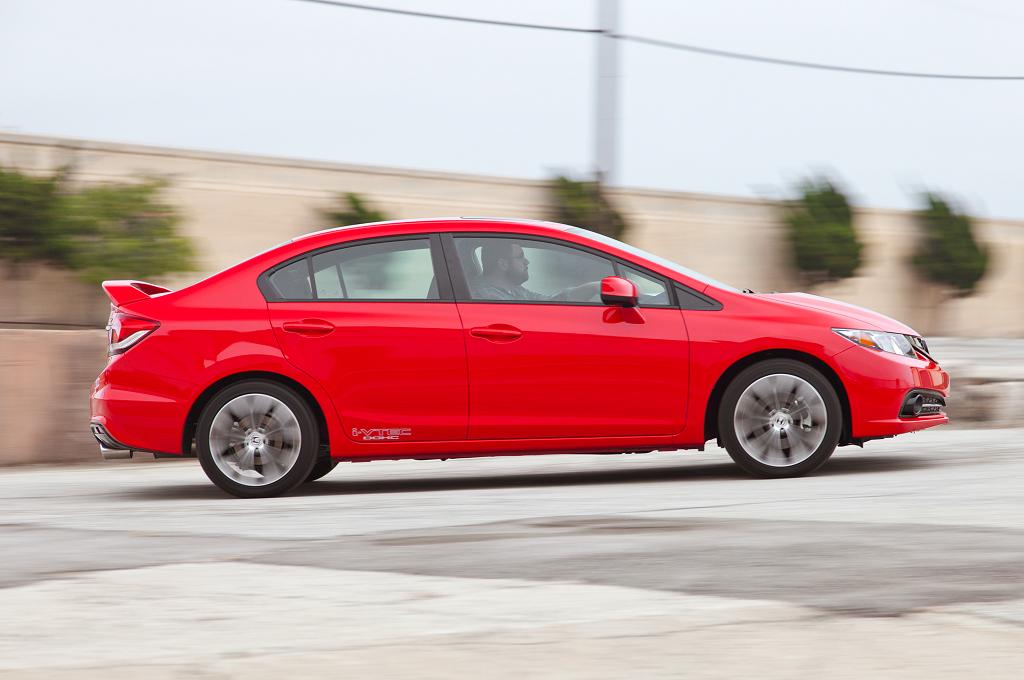 Is it still going to have a torsion beam rear suspension? All that power won't matter if it has the same setup as the last one.

Rex Luther said:
They've said that that's not going to happen.
I'm probably getting older, but I would take the 5 door option (when avaliable) every time when picking hot hatches.
Click to expand...

As an owner of a tiny 3 door hot hatch, I agree. The small size is great a lot of the time, but most of the time I think the extra practicality I'd gain with something like a 5-door Golf GTI would be enough to live with the less sharp car. It's what's putting me off going balls out for an 86 or BRZ, or even a Megane RS250 or 265. If you ever have to take passengers, they hate having to go in the back of a 3 door. It even makes reaching for things in the back seat a pain, which I have to do a lot now that my boot lock has stopped working...

If this thing can out-do an RS Megane at its own game, as well as come with back doors, I'd really consider one. And I'm not a huge Honda fan.

4(5) doors on a hatchback are 2 too many. If someone doesn't like getting in the back - take a bus.
EP was the last decent looking civic. EK the last good looking civic. That new R will have a great engine, but i looks like an egg(more so in NH-0, championship white).

I wonder if japan will get a proper, nice looking R again?

As for th mazdaspeed 3. Knowing someone with one and personaly having driven thousands of kilometers in it. It's fun, but the electronic nannies are annoying. Also, some design "features" call for a thick wallet.
Have you ever noticed that anybody driving slower than you is an idiot, and anyone going faster than you is a maniac?

Wizegui said:
Is it still going to have a torsion beam rear suspension? All that power won't matter if it has the same setup as the last one.
Click to expand...

If it works, why would it be an issue?
The old Renault Clio RS200 is widely regarded as one of the greatest FWD chassis to ever grace the black stuff and that thing had a torsion beam rear.
Help greyhounds find their forever homes.
http://greyhoundadoptionswa.com.au/

Rex Luther said:
If it works, why would it be an issue?
The old Renault Clio RS200 is widely regarded as one of the greatest FWD chassis to ever grace the black stuff and that thing had a torsion beam rear.
Click to expand...

Given that it's Wizegui we are dealing with he is probably complaining in retaliation for the "LOL leafsprings/solid rear" attitude of some Europeans towards the Vette/Mustang.
Last edited: Sep 13, 2013
Battered and weary after the craziness of the 1960s, the self-righteousness of the 1970s and the greed of the 1980s, I want to go home again, oh, so desperately - home to that land of drive-in restaurants and Chevy Bel-Airs, making out and rock 'n' roll and drag races and Studebakers, Elvis and James Dean and black leather jackets. Not that I ever owned a black leather jacket.
(Roger Ebert)