and what was the loophole? the fact they replaced his engine without it being broken?
iirc, alonso's second engine only had a waterleak, and will also be used again in the future
what failure would be severe enough to grant a replacement?

The loophole is basically ...

it's a stupid system, no doubt about that

but what's stockpiling though?
alonso his engine had a waterleak during FP1, and instead of fixing it, they just replaced it, so it could be properly inspected, that one will probably also be used again. in a way they also stockpiled while every team would've done the same thing, and has no second thought about them
if you want new engines, it's not hard to not tighten a clamp, induce a leak, and have an additional free engine after all
Last edited: Aug 29, 2016
M

Well that's what they mean about fixing the loophole, I guess, before it becomes the new fashion to request more and more engines in trade for penalties which then go away in a single race, with the results that teams who can afford it will have a lot more engines than they were initially allocated.
M

Double post, I was just talking to a friend who used to watch F1 with me back in the early 00's.
He asked me very simply... has F1 become less boring than 3 or 4 years ago?

He was talking about the Vettel years. Specially 2013, it was utter boring domination.
Well, I said, both in 2013 and 2016, the second place constructor had 274 points after 13 rounds, which is a coincidence.
What's different is the points of the first place team... Red Bull had 377 back then, Mercedes today has 455

mpicco said:
Mercedes motorsport boss Toto Wolff has called for a loophole in Formula 1's rules to be closed that has allowed Lewis Hamilton to build up a pool of fresh engines.

What they should do is have a "council of sportmanship" or something like that, which would take a look at these loopholes AFTER someone exploits them and apply penalties. In this case, invalidate the engines and deem them off bounds.
Heck even in online games when someone finds a glitch the game masters usually penalize those who exploited it after patching it.
Click to expand...

No need for all that bullshit, just have every penalty position behind last be converted into a 1 sec delayed start.
So Hamilton has p 21, he has a total of 55 penalty places, so he"ll have to start dead last AND wait and additional 34 seconds.

This does not "cure" the engine stockpiling, only way to remove that is to have the penalties carry over to the next race, which was like it was, and they abolished that because boo hoo poor McLaren...
M

NooDle said:
No need for all that bullshit, just have every penalty position behind last be converted into a 1 sec delayed start.
So Hamilton has p 21, he has a total of 55 penalty places, so he"ll have to start dead last AND wait and additional 34 seconds.

This does not "cure" the engine stockpiling, only way to remove that is to have the penalties carry over to the next race, which was like it was, and they abolished that because boo hoo poor McLaren...
Click to expand...

Im more on board with the idea that if the penalties add up to you being in last place, whichever penalties are left go for the next race and so on until you served them all. Unfortunately for Mercedes, 30 some seconds of penalties would mean very little, they would start from the pit lane, have very clean air ahead, and catch up to the last car in the first 2 laps, and then get to overtaking even more easily than during the start of the race (which is dangerous cos pileups)

or...10 places penalty when you arrive with a different engine than last race
even if that engine has already been used!

i think even mercedes would think twice about changing it...

The current system is fine, if they think they can get away with the bare minimum of running during practice sessions then fine. The biggest issue is that Lewis can afford to make a risk like this. I just wonder what would happen if they went over the token limit for upgrades.

i don't believe williams is willing to put a rookie in their car, so button to williams and stoffel to mclaren?
Last edited: Sep 1, 2016

Or maybe Button stays at McLaren because he wants to stay and they need him, and Stoffel Vandoorne goes to Williams.
It's a shame Suzie Wolf decided to retire from motor sport because this would have been her chance to make a big push for a seat.
M

i don't believe williams is willing to put a rookie in their car, so button to williams and stoffel to mclaren?
Click to expand...

Yeah I know this is predictable from me but, 6 years too late.

The Button news means he won't be in the Williams next year either so it'll be interesting to see who gets that seat. It was said on Ted's notebook that Kvyat will lose the Torro Rosso seat so maybe him or Nasr; maybe even one of the Manor drivers. 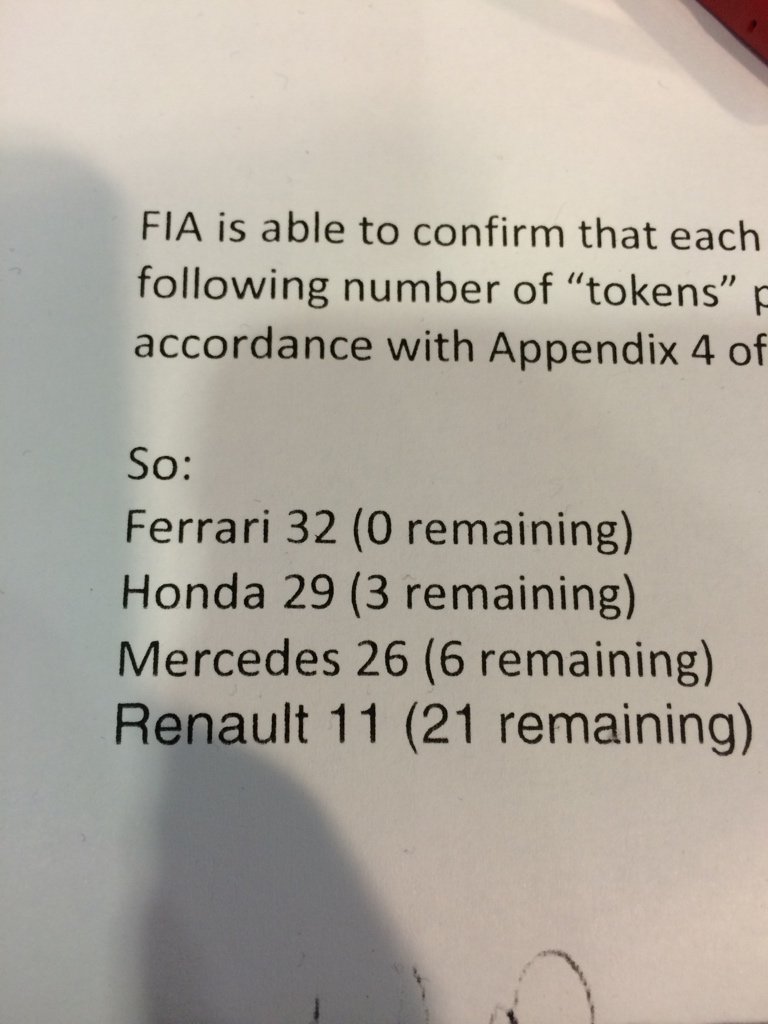 Not necessarily, now they can only focus on improving chassis and aero. Also Renault for whatever reason don't seem to be bothered to use their tokens.

I think Renault are just struggling with other problems within their team....their engine isn't that terrible since it works fine in the Red Bull

Anyway, I can't help but wonder if Ferrari would have at least had a shot at a 2 - 3 finish if they had done the 1 stop. They can't be that bad on the mediums can they?

I also doubt it, but it seems the Mercs are spectacular on the mediums while the other teams aren't?

The Mercs were spectacular on all of the tires, Nico pulled a huge gap on Seb at the start on the softs. I guess they didn't run the super softs so who knows what their pace would've been on them.
You must log in or register to reply here.
Share:
Facebook Twitter Reddit WhatsApp Email Link
Top