argatoga said:
What particular issues do you have with each of the four candidates?
Click to expand...

Hillary: I'm disappointed by her handling of the e-mails. It shows poor judgement.

I don't like how she seems to latch onto things/ideas because it's politically convenient, not necessarily because it's the right thing to do. (Her stance on LGBT issues compared to Bernie comes to mind)

Beyond that, the 'baggage' surrounding her campaign is just a real turn off to me, whether or not it's true or not.

Stuff like Debbie Wasserman Schultz supposedly doing whatever it takes to ensure she'd get the nomination.

Stuff like that anchor passing debate questions to her team so she could have a leg up.

It's all shady. It's not a good look and the alleged stuff that happened in the primary alone has made me 110% disillusioned with the Democratic party - I thought they were better than this shit. Guess not.

It's funny but this is like the one political thing that LeVel and I can likely agree upon. A strong dislike for Hillary.

Trump - his crazy comments/opinions/followers aside...I initially thought he was just doing it for the lulz, hell maybe even as a Trojan Horse for the DNC/Hillary considering his friendship with them in the past.

I'd never in a million years vote Republican, I just don't agree with pretty much any of their party world views, despite Donald shaking things up in a slightly more socially liberal way.

If I was leaning that way it would turn me off knowing that he also won't give a concrete plan for some of his most famous ideas. (How is he going to get Mexico to pay for his wall? What is he going to transform the Insurance Marketplace into? How? How much? What coverage will it reduce/increase?)

His debate performances didn't inspire confidence that he truly knew his shit.

I want a President that knows. their. shit. That's admittedly an advantage for Hillary.

Johnson - he sounds like a pretty nice guy. He hasn't said anything terribly crazy a'la Trump.

But again, there's that knowledge thing again - I expect my president to know what the fuck Aleppo is or at least surround him/herself with sharp people who do know and prepare him/her accordingly.

Also, and this isn't something against him, I don't really subscribe to a lot of the stances of the Libertarian party, mainly cutting as much govt. as possible. It can be good, sure, (looking at you, potential mandatory self driving car......) but have unintended consequences. It would really have to be thought through.


Stein - she's smart, sure, but like Trump and Johnson....there's this knowledge problem - she tries to suggest how she'll pay off student loans through quantitative easing, ....yeah that's not how that works.

It doesn't inspire confidence that she'll have the knowledge base she needs quickly enough to determine whether her plans are feasible.

She too is vague about much of her plans. How is she going to pay for healthcare reform? The transition plan she has for people displaced from fossil fuel jobs while they train for green energy ones?

Concerningly, she fuels conspiracy theorists and may be one herself. Her wishy-washy stance on vaccines comes to mind. As a doctor, she should know better.

I'll admit, I was/am a Bernie Bro. It was/is naive to believe he wouldn't have to deal with the same stalemate that Obama has been in for a while in terms of being able to pass things, but still a guy could dream.

On the plus side, his departure has managed to highlight the need for local voting - the Republican party has a in built advantage due to the age of most constituents. They have the time and the drive to vote in these local and state govt elections and who they elect has a great impact on you day to day.

So at the end of the day, ill likely hold my nose and vote for Jill. I may take a "I side with" again just to see if anything changed.

It's a fucking shame that there's zero Candidates that I could vote for and be proud of. Absolutely fucking zero.
Last edited: Nov 2, 2016

When it comes to the office of President sadly there is a misconception on how much power they have. Outside of vetoing and the Vice President having the right to call a tied Senate vote, the Executive has no legislative authority. Unofficially the President has a lot on account they tend to take over their Party's policy, but even then there is the opposition. I don't mind Stein as she would have little power as a third party candidate (the same for Johnson). For Trump and Clinton things are different, Clinton has the connections and the blessing of the Democratic Party, and thus will be able to lead. Trump, while disliked has already shown the ability to lead the Republican Party (he has moved it socially Left regarding LGBT and religious issues).

In terms of knowledge, I am more concerned with principals than knowledge. Decisions will steam from ideology. To give an example, I am liberal (natural rights, social contract, individualism) and base my decisions on its precepts. I believe universal healthcare protects natural rights for those who would not receive charity and avoids the indoctrination that religious care tends to demand. For geopolitical and regional knowledge advisors exist. The US Government hires people who have dedicated their lives to the study of individual countries and fields such as economics; their collective knowledge is beyond what any President can achieve. An executive's task is to make decisions based on their skills of judgment and values.

An issue with Trump is that his ideology, based on his 70 years prior to being a candidate, isn't firmly rooted and tends to be based on popular opinion. Clinton is further to the right of Obama, and lets her policy be based on corporate interests. Stein I disagree with on many points, but she would be powerless so I'm not too concerned (ditto for Johnson).

I'm glad he ditched the stupidity of comparing Trump to Hitler, however I'm not impressed by the idea that a President should be a parent. It may sound like semantics, but I prefer the notion of a leader. The latter must earn the legitimacy of their followers, the former has it inherited.
Last edited: Nov 2, 2016 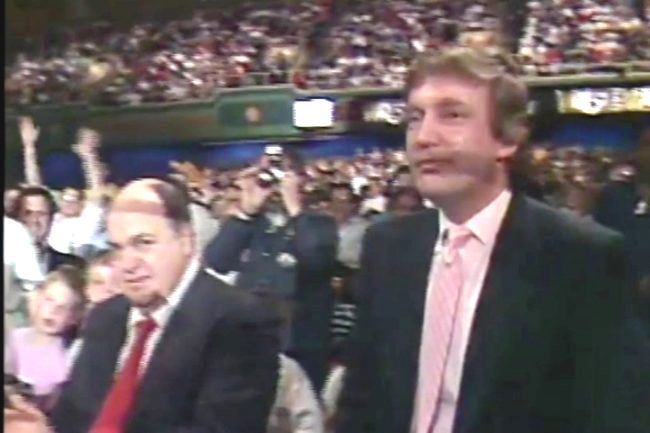 That's funny, I didn't know George Costanza was a mobster.

This is a theory, just a theory. It makes sense though.

Just caught a speech by Melania Trump. It shows me just how out of touch she is. She worked hard as a model. Try working as a waiter. Kids are bullied and that is bad, but Donald will stop it as president. If he stops it, will he put himself in jail? Maybe she doesn't know what he has done with the Twitter, or maybe it is okay because he puts his name on it?

GRtak said:
Just caught a speech by Melania Trump. It shows me just how out of touch she is. She worked hard as a model. Try working as a waiter.
Click to expand...

I'm sure neither is easy. There's more to modeling than sitting around looking pretty, I bet.

LeVeL said:
I'm sure neither is easy. There's more to modeling than sitting around looking pretty, I bet.
Click to expand...

I know neither job is easy, but in comparison, the model gets coddled.

GRtak said:
I know neither job is easy, but in comparison, the model gets coddled.
Click to expand...

So her job isn't easy, right? How is saying that she worked hard make her out of touch?

The Polls Tighten with Six Days Left: A Closer Look

She made it sound like she was moving a small mountain.

Or, you know, she had a real job unlike Chelsea Clinton who got $600k for doing basically nothing at NBC.

The FBI has debunked the conspiracy theorists, there are no ties between Trump and Russia. The messages between the servers were most likely targeted e-mail spam from the Russian bank. Other tin foil hat ideas are also invalidated in the piece.

Hopefully this revelation will penetrate to the progressives hiding inside their Cold War backyard bunkers.
Last edited: Nov 4, 2016

argatoga said:
The FBI has debunked the conspiracy theorists, there are no ties between Trump and Russia. The messages between the servers were most likely targeted e-mail spam from the Russian bank. Other tin foil hat ideas are also invalidated in the piece.

Hopefully this revelation will penetrate to the progressives hiding inside their Cold War backyard bunkers.
Click to expand...

Manafort resigned , shortly after disclosures by The Associated Press about his firm's covert lobbying on behalf of Ukraine's pro-Russian government at the time.
Click to expand...