Well, I guess GM wasn't content with Ford destroying them in Mustang sales, so they gave the Camaro a refresh. 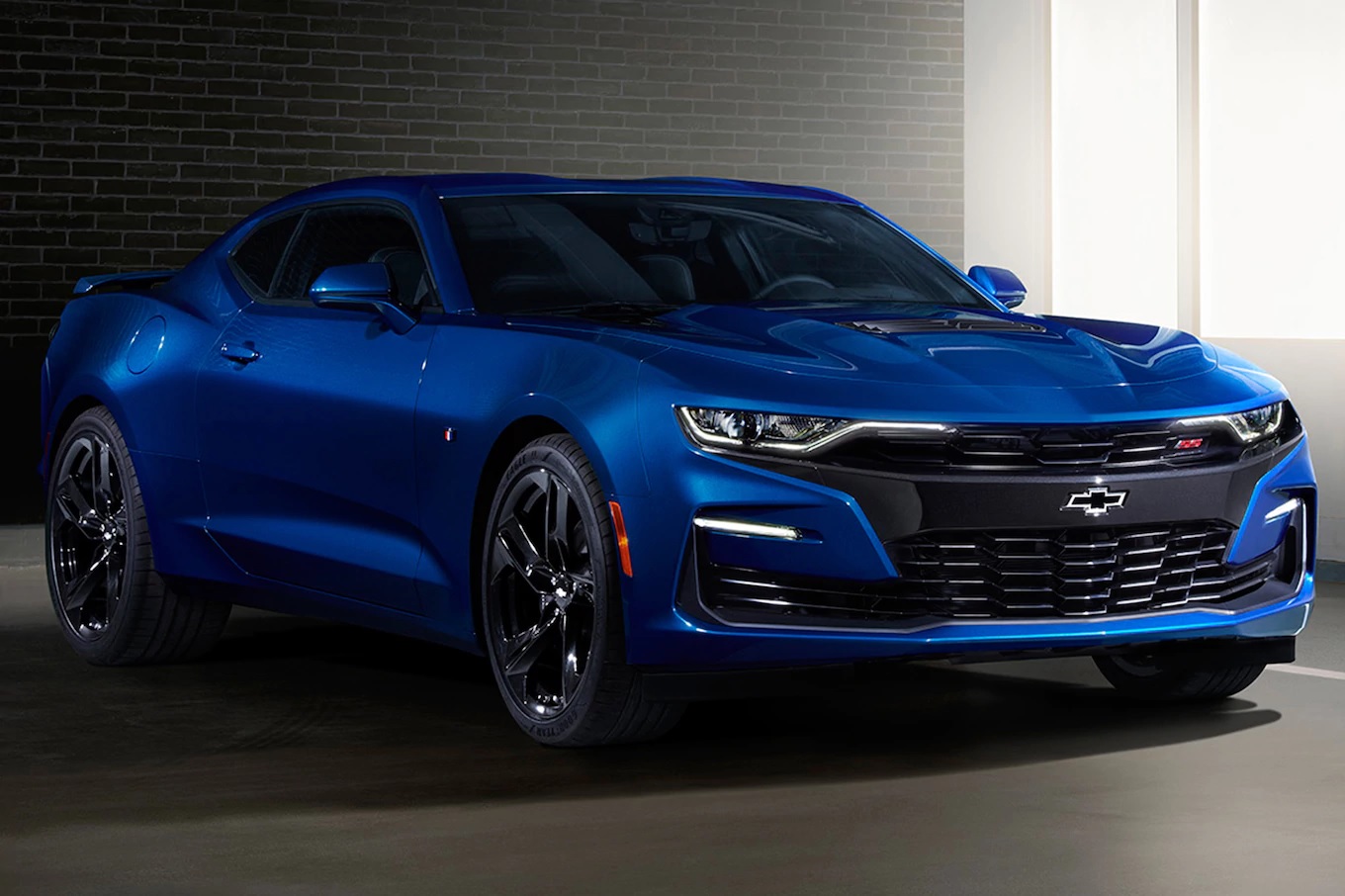 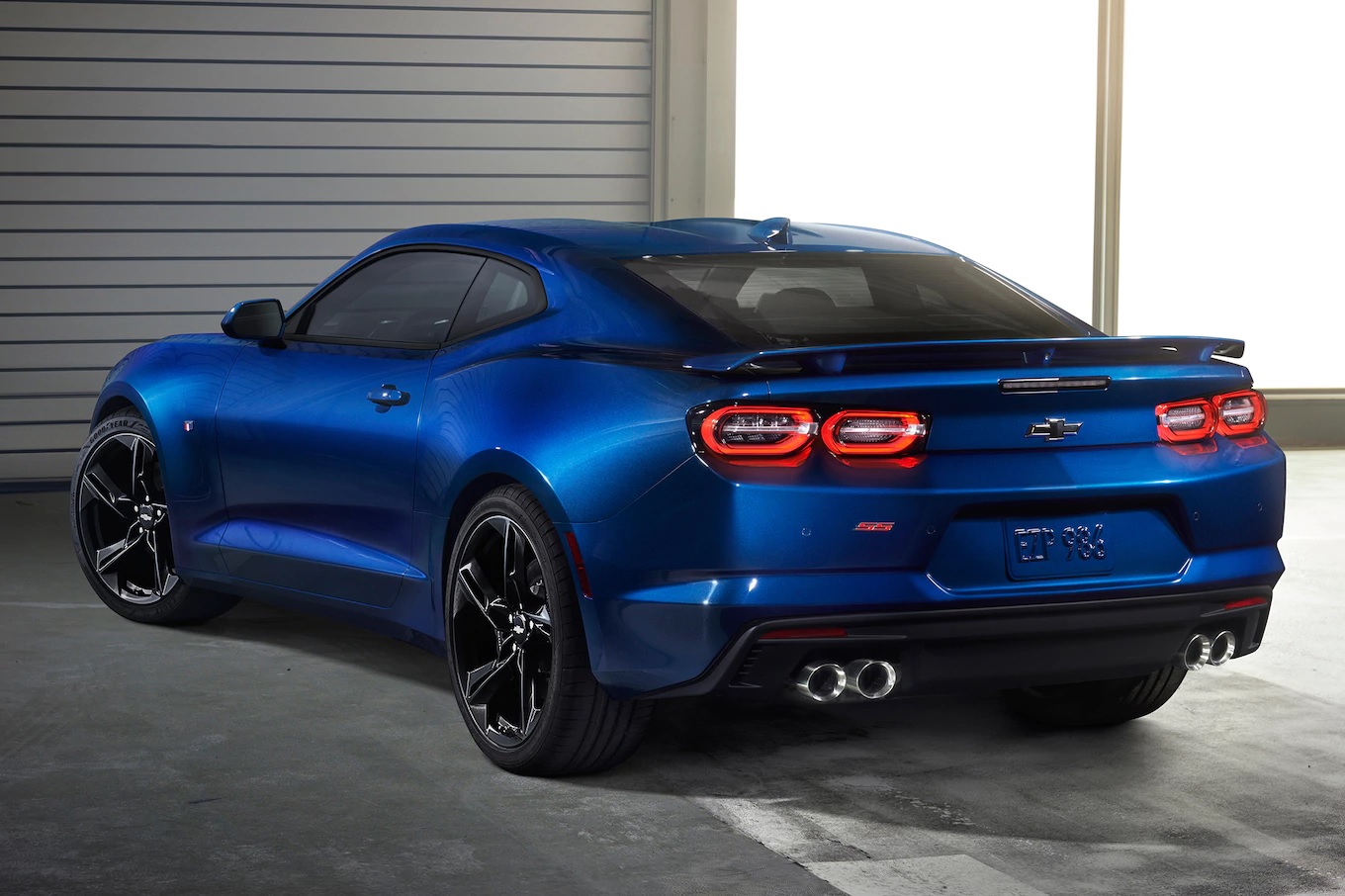 Unbelievable. The lower models are not as ugly though, so at least you don't have to worry too much about rental agency "upgrades". 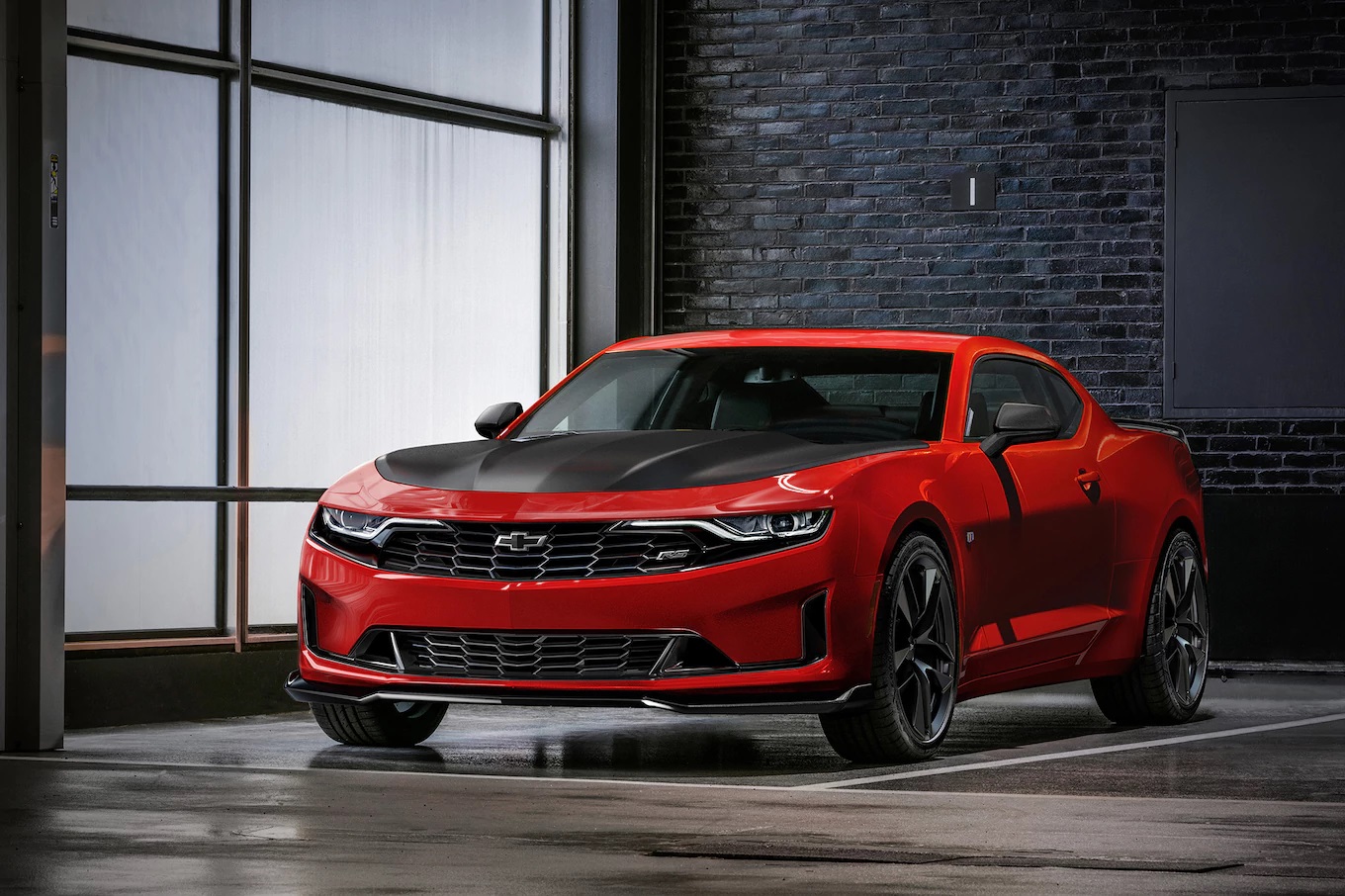 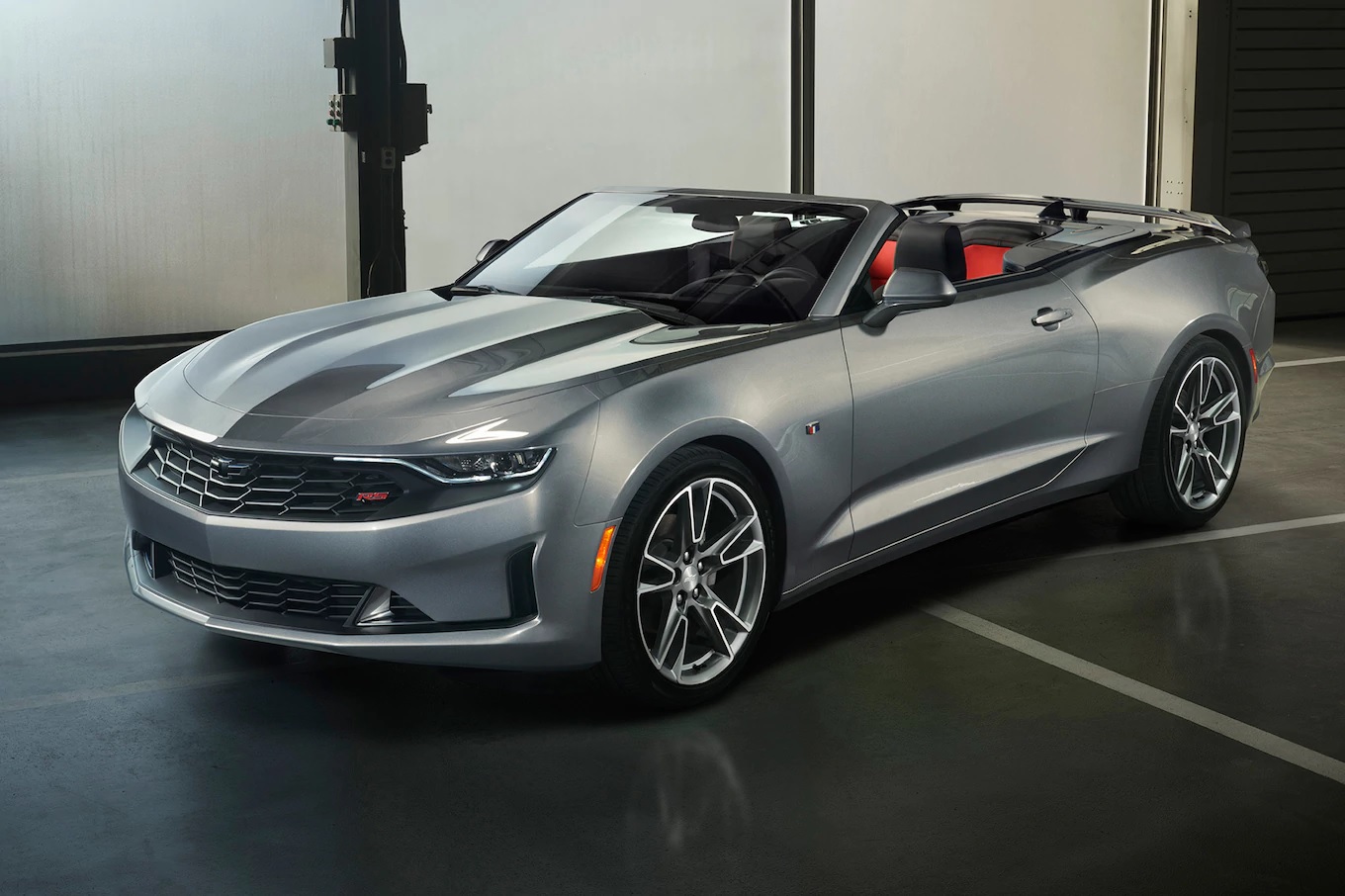 The only thing I really hate is the large egg-crate grill, it just looks cheap; I suppose the cheek scoops are a little much. The tail and the rear quarters are pretty nice, I like the muscular looking hood, and the combination of the wide wheel arches and pinched "waist". I'm not a fan of GM, but I think the styling is pretty spot on for the emotion they want the car to convey. It sure is better than the Styling By Wind Tunnel stuff we see on more mundane cars.
No trees were killed in the transmission of this message;
but a stupendous number of photons and electrons were terribly inconvenienced.
​

I agree with Blind here. The car is not bad looking at all, but I still don't much like the front. I hate that bumper. Once again there is a car that looks like it has a mouth-guard in and is trying to show it's teeth at the same time.
"I wish for an America that matches the marketing materials.” - @HardcoreHistory

Unike the Mustang, it doesn't make me want it. Design is too brash for my taste.
"If Liberty means anything at all, it means the right to tell people what they do not want to hear" (George Orwell)

The back's not bad, but holy fuck is that front end an abortion of automotive design.

GM lost its styling edge years ago. I'm reasonably sure that I'm not ever going to buy another new car (for myself); but it I do, it WON'T be anything from GM.

I like the current version, but don't care for this. The back is OK, but the front doesn't work. Looks a lot like an SRT Charger, which i also don't particularly care for, but the styling does work better on a 4-door.

Just stumbled across this video of a 2019 tester and I have to say, it looks a bit better than the press shots from GM.


Still not convinced it's an improvement over the current styling, which I consider a step down from the previous gen, but it doesn't look as bad as I first thought. It's really the bow tie emblem placement on the front that throws it off for me. It's too low on the bumper.
Last edited: Apr 19, 2018

Just from the thumbnail, I think it looks worse. They should drop the "SS" badge and go with "CC" for Chipmunk Cheeks.
No trees were killed in the transmission of this message;
but a stupendous number of photons and electrons were terribly inconvenienced.
​
H

I don't like the front of the car at all.

Blind_Io;n3548467 said:
Just from the thumbnail, I think it looks worse. They should drop the "SS" badge and go with "CC" for Chipmunk Cheeks.
Click to expand...

Well, GM has done an emergency rhinoplasty on the Camaro for 2020:

Definitely an improvement, but still not a pretty car like the Mustang. And still not even as good looking as the 2016-18 models.

But this is even more interesting. They're introducing a new stripper V8 model called the LT1, which uses the base model's styling, and undercuts the cheapest Mustang V8 by $500.

Remember when Chevy revised the Camaro SS's front end back in 2018, and pretty much everyone hated it? Well, Chevy heard your complaints, so it fixed the nose, putting the bowtie emblem in the grille in between the headlights, and made the front plastic grille split piece body-colored. It looks a whole lot better, but that's not the extent of the news—Chevy's also offering a new affordable V-8 model called the LT1.

Starting at $35,990, the LT1 is now the cheapest V-8 powered Camaro you can buy, undercutting the 1SS by just over $2000. For those cross-shopping, the LT1 is also cheaper than the base V-8-powered Mustang GT, which starts at $36,450. It comes with black bowtie badges, trims-specific fender badges, 20-inch wheels and the vented hood from the SS. What it doesn't get from the SS are summer tires—it makes due with all-seasons.

The V-8 Camaro trims aren't the only ones getting updates, either: The V-6 Camaro's optional eight-speed auto has been replaced with a new 10-speed unit. This brings it up to par with the V-8 models, which have had an optional 10-speed automatic since 2017. There's also a new color in the Camaro lineup called "Rally Green," though Chevy has yet to release images.
Click to expand...

5th and 6th gen Camaros have all been ugly. Quite frankly, everything GM makes nowadays is shit (except for the Corvette and a few Cadillacs); completely outclassed by Ford and Chrysler.
"Men with guts attack those corners!" - Keiichi Tsuchiya
2018 Ford Fusion Sport 20-present

I'm going to buck the trend and go out on a limb here but I rather like it. If anything I prefer the one in the OP to the toned down version.
WillDAQ: To use the technical terms: "the Mustang is to aerodynamics what horse shit is to fine dining"

I liked the 5th gen... although I was initially harsh on the revision (I called it a Camarolude), I’ve warmed to it. I also liked the 6th gen initially, except the rear was just too tame.

When I first saw the 6th gen refresh it reinforced my belief that GM can never get it all right. They made the rear better, but at the expense of that awful new schnoz.

Now? Kudos to the changes for 2020... much better. If I were shopping for a Camaro/Mustang this new one would definitely be given consideration.

Wow, they’ve made headlights even smaller. The 16/17 look is probably the best if I had to choose.