Got myself a new toy.

Been wanting an RWD ever since I had an 106 Rallye. For some unknown reason I wanted to try a fun FWD and got bitten by Lastsoul's Rallye. Even tho it was fun, I found out quickly that I'm more of a RWD person. So lets have a quick peak few years back to Rallye at first.. 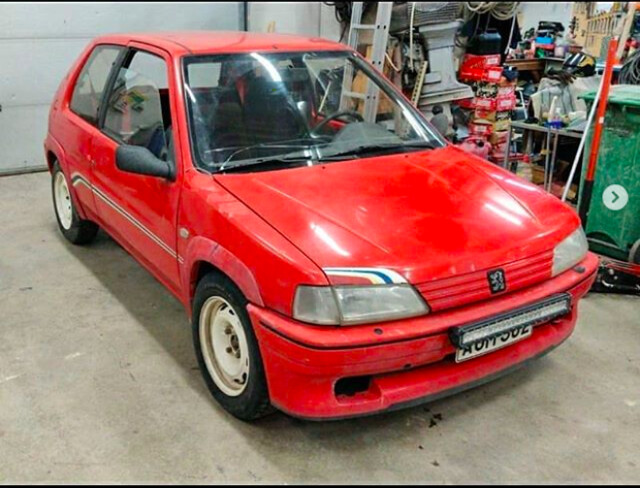 It was as fugly and worn out as they come, it had seen some 280tkm of seriously rough life on street and on track. 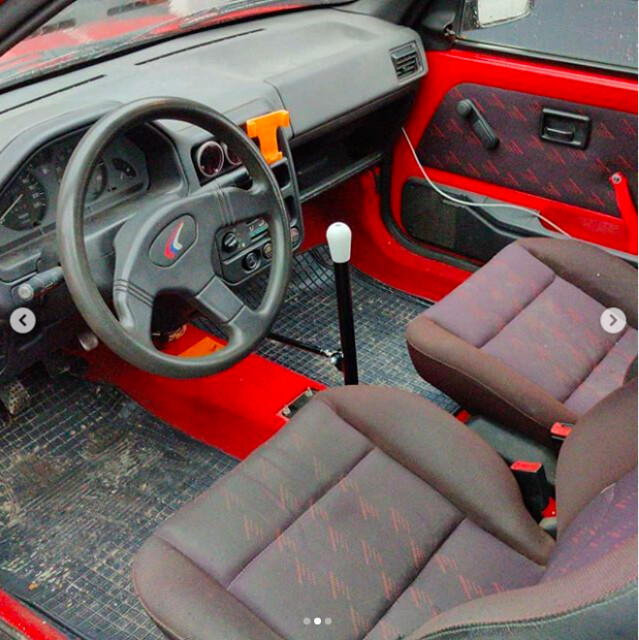 Fell in love with it when I saw the gearstick and realized that it was running ITB's
(screaming all the way to 8k, I seem to have an serious ITB addiction). 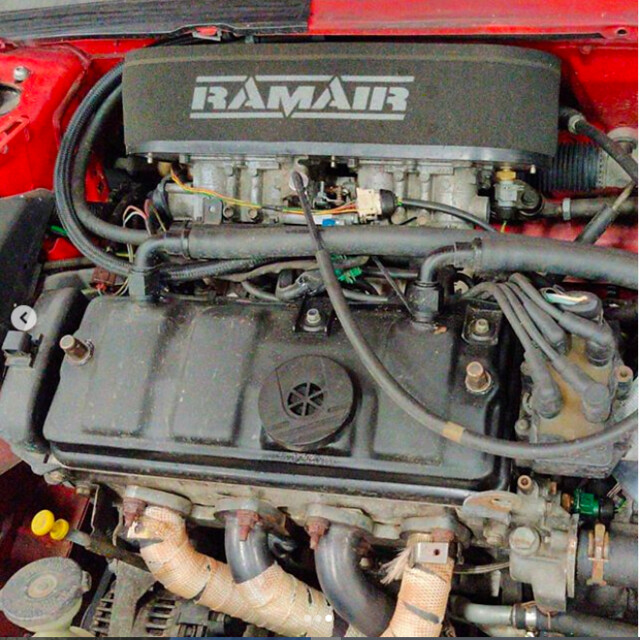 What made it great was brand new, full group N suspension and upgraded brakes, made it feel like new car to drive. Lostsoul said that he's never driven a car that looks so bad and drives so great.

Said Satchshift gear stick set up gave those rally dreams something real to grab, until realizing it had brutal appetite for gearbox syncros. It had 15" semis on C5 steelie alloys and original steelies for winter. PO had swap'd a longer 5th gear from 206 for motorway cruising.

Driving FWD with LSD is really, really fun. And weird, pulls inside the curve, instead of disapointing understeer and those lovely lift off drifts get better and easier to control. I have videos of how great it sounded while flying past really slooooowly, if you are interested. It did shoot flames too.

Got tired of fixing 106 and Vespa. They seemed to have joint venture of dying everytime one got fixed. Sold both to friends, bought Honda CB600, sold that, bought magnificent 1400 GSX, sold that too and then it was time for BMW.

After the GSX 1400 was sold and Prius paid, I was left with some cash that was burning a hole in pocket. I opened nettiauto.com and started to scroll through it for umpteen time for RWD with manual. I had had an eye on Compact's for few months already and from all RWD's this was the smartest car I could buy with my budget.

...Non leaking, two way sunroof. Weirdly, I've never liked sunroofs and now I do, I must be getting old and soft...

...I'm not a great fan of tinted windows either, but these are professionally tinted and seem to like them too..

Wheels are 17" Alutec's with fresh cheap 225 tyres. It is running JOM adjustable lowering springs and shocks, nice thing is that those have been approved by MOT. No extra noises or looseness from suspension, just firm and sharp to drive. Love to drive it, kinda feels like coupe Miata with AC and cruise, something I was always looking when I had Miata's. Even wife loved it, laughed first 500m while driving it.

Did I say it is rust free? Yeah, that's great too, two patches on rear most lift points. Found it out as I was crawling under it to remove exhaust second day of ownership. Had to weld last silencer that had broken off, thanks to rusty worn pipe.

So what's the catch? Broken windshield, bit worn gearbox and dont think clutch is either in its best. There's something weird going on on front corner of bonnets paint, timing chain might need some love in near future. One of wheels isn't round, need to source new set, prefer original BMW wheels and would love style 32's.
Also it needs few interior pieces and LSD.

It has great 3 way speakers setup in front, not sure if the speakers are original, but at least in original places and sound pretty good. And with BT Pioneer it works great!

Listening from YT music is so much fun, connection is instant and playing with Pioneer's really good options makes my old car stereo nerd's soul purr. Sat in the car yesterday evening, adjusted DSP to correct length/time delay and set HPF to 50hz, no point trying to squeeze anything lower from mid basses. In pictures Pioneer doesn't sit nicely or flush as the radio didn't work, had to pull it out to connect the radio antena. Found out that it has wrong fitting surround that PO had used force to install. Rear speakers aren't connected, so one more thing that need attention.
Last edited: Sep 9, 2021

At my first scroll/glance I suspected the car to have twice the power than it actually has. So the spordy-spoilers look actually worked on me.

Thank you guys for replies. It isn't as mint as it looks on pics. but close enough. Don't remember when was the last time I sat in car after getting home, just to listen the song to the end.


lip said:
At my first scroll/glance I suspected the car to have twice the power than it actually has. So the spordy-spoilers look actually worked on me.
Click to expand...

Bought a cheap Chiness short shifter and installed it at the same time as I changed the oil. Little bit of common fiddling as expected with cheap China parts, but it does what it promised.

I knew it, before I bought a BMW, that no matter what BMW I'll get, I want style 32 wheels for it.

There's been two 16" set for sale (and one 20" set), both in a pretty bad condition, so after umpteen time I decided to search just tyres and score, found a Hankook winter tyres for sale that included mint Style 32. After an inner fight of spending winter tyre money for summer wheels that had worn out winter tyres on them, I won. So a few messages, trip to Turku, low baller that seller happily agreed on, they were mine.
New center caps are on their way.

So old set of tyres and wheels are for sale. Tyres are almost brand spanking new, but one of the wheels has seen better days, realized it on test drive and used it to bargin the price. Depending on speed, driving with constant massage or tooth loosing shake just isn't fun.

Did some painting at weekend, front corner of the bonnet was really bad. Started by whiping it with paint thinner and you can see from top part of the pic what happened, lower shows how bad it was.

We did some work with it and will need to continue later.
Bumper and mirror cover got painted, need to wait them to cure before buffing.

Did a small find that had a huge difference on the seating position. For a some unknown reason, there was a limiting screw on a drivers side seat rails. There is place for it on co-drivers rail, but theres no screw limiting its movement. I got missing few cm that made huge difference on seating position. Already had had pain from the weird ankle angle.

It was SORN'd and waiting for the snowfall. Came one late saturday evening and laying on bed I thought that maybe should try to sell it with little profit. Wasn't really serious about it but also thought that if it sells I can correct the mistake and buy BMW with straight six and if it doesn't, I don't really loose anything, I'm more than happy to keep it. Landed advert to FB and few local car sale pages and straight away I had a queue of buyers.

First comment on FB was with this tale tellinge picture, sent by friend of owner before PO.
Story goes that guy whom PO bought the car, had drank for a week and then, driving drunk, crashed the Compact into he's own HJ60 at he's own yard. Great, thats the missing part of the history.
Also contacted the first lady owner who had imported it. She lived in NY at the time and bought it from New Jersey. She had specially wanted manual and it had been ordered from half a country away, that's why it came with options it had. When she went to pick it up, whole store stopped working and came to see if she knew how to use the clutch.

Buyer for Compact came following monday, walked around once, paid and drove off. Did make me think if I should've asked even more. New owner has six project cars and one of those is a e36 Coupe that has M50B20 waiting to move under the Compact's bonnet.
Last edited: Nov 7, 2021