Completed a project on the 3D printer today. I was fed up of scratching my arm when reaching around the back of the machine to turn it on and off, so got hold of a switch on Amazon. A nice green one with illumination. Easy to cut a small hole in the side of the case and then remove the wires from the existing switch. Oddly, the wires that went from the mains IEC socket to the switch and then to the power supply were neutral, but red. The live wires are black, obviously someone was having an off day in the factory. I used proper blue wire from an old mains power lead and wired up the new switch to toggle the neutral as before and used heat shrink to cover as much of the exposed terminals as possible. 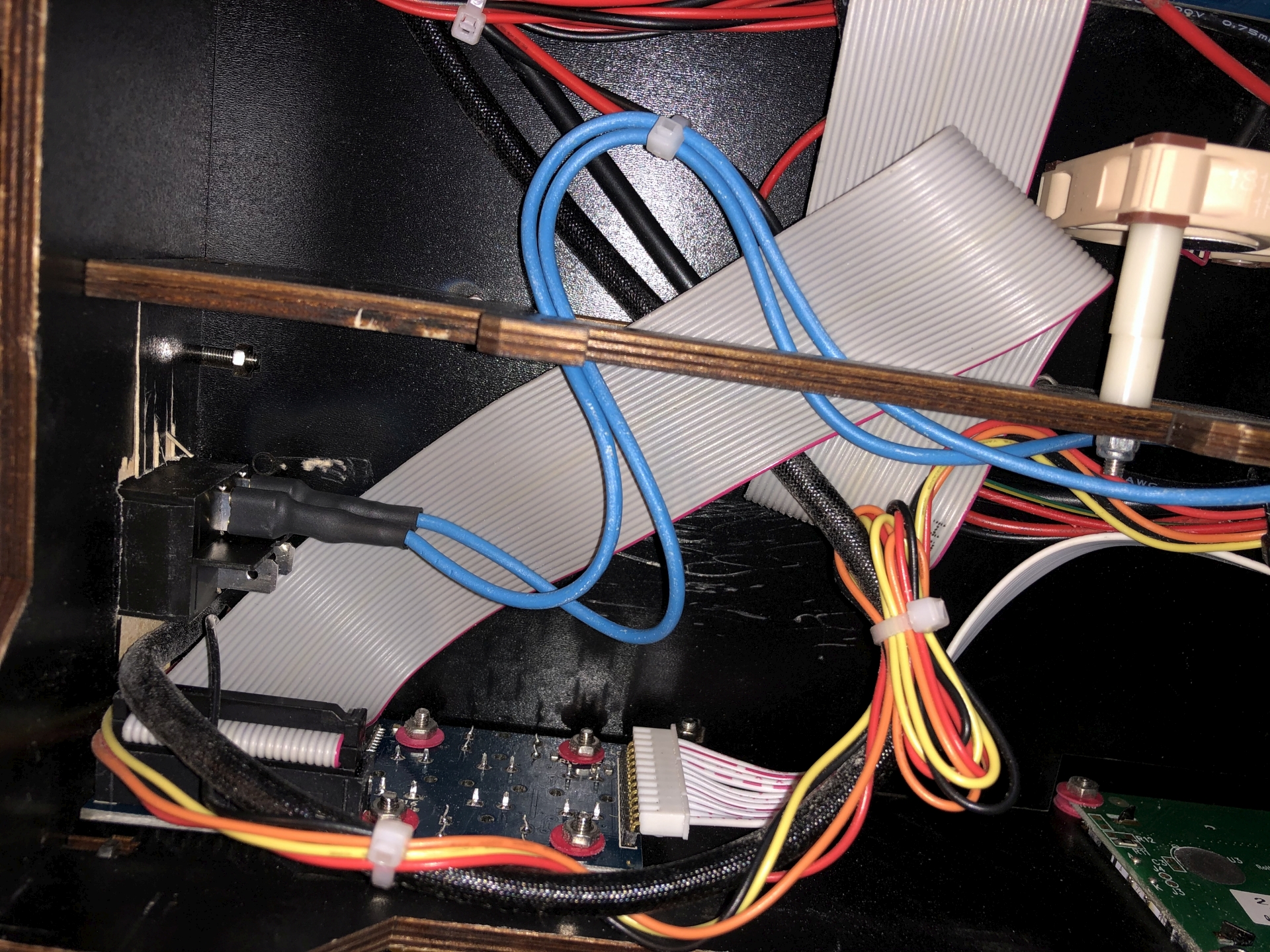 Also in this photo are the 24V to 12V dropper boards for the Noctua fans I've now installed and a relay that I will mention another time. 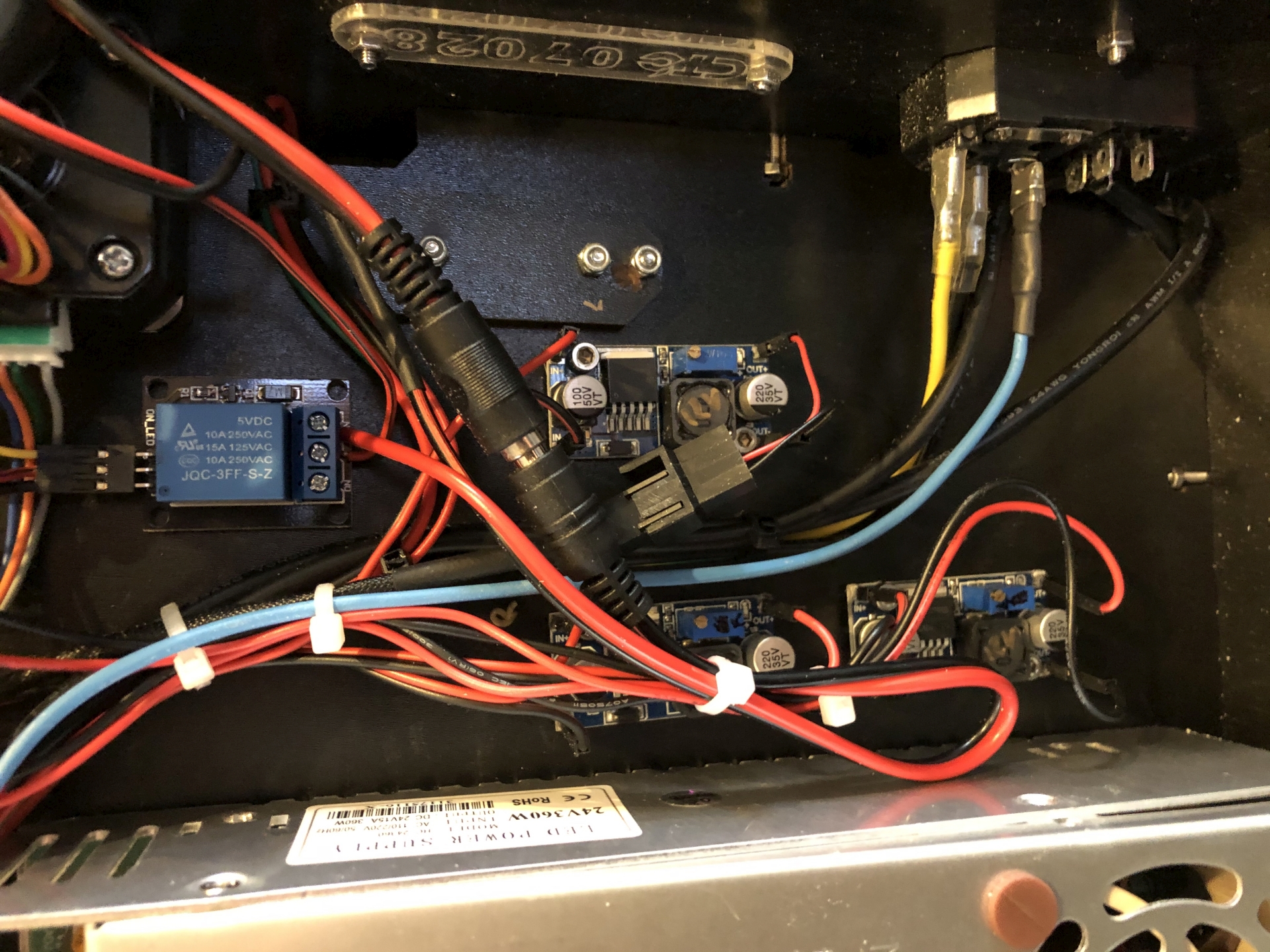 I didn't really pay much attention to the wiring of the LED inside the DPST switch, so just switching one side of the circuit isn't enough to bring the light on. I don't mind...

Half an hour later and the incorrect coloured wire combined with the want for illumination meant I made up two new live wires in shit-your-pants brown to match. That sweet, sweet green light is worth the extra work. 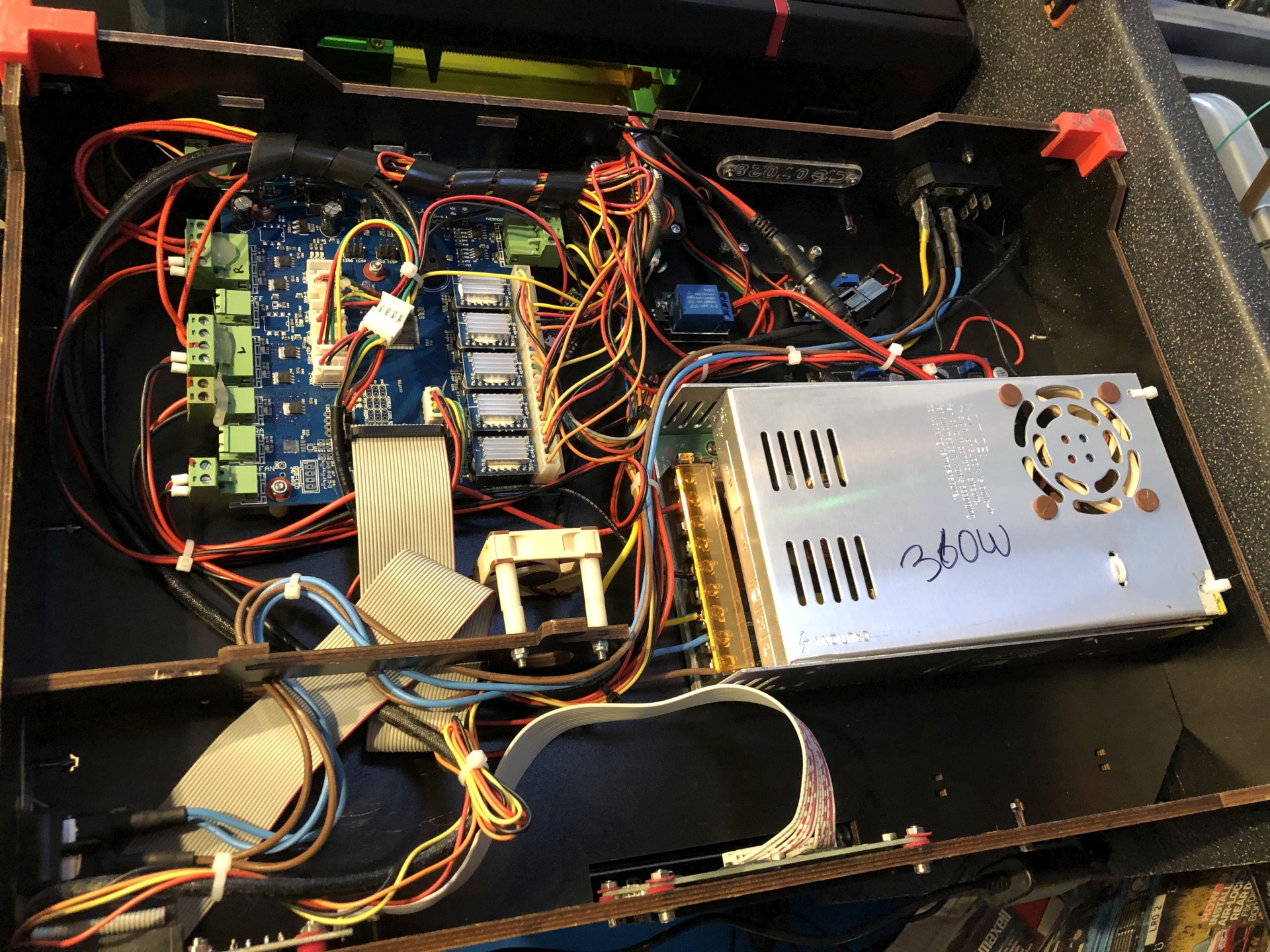 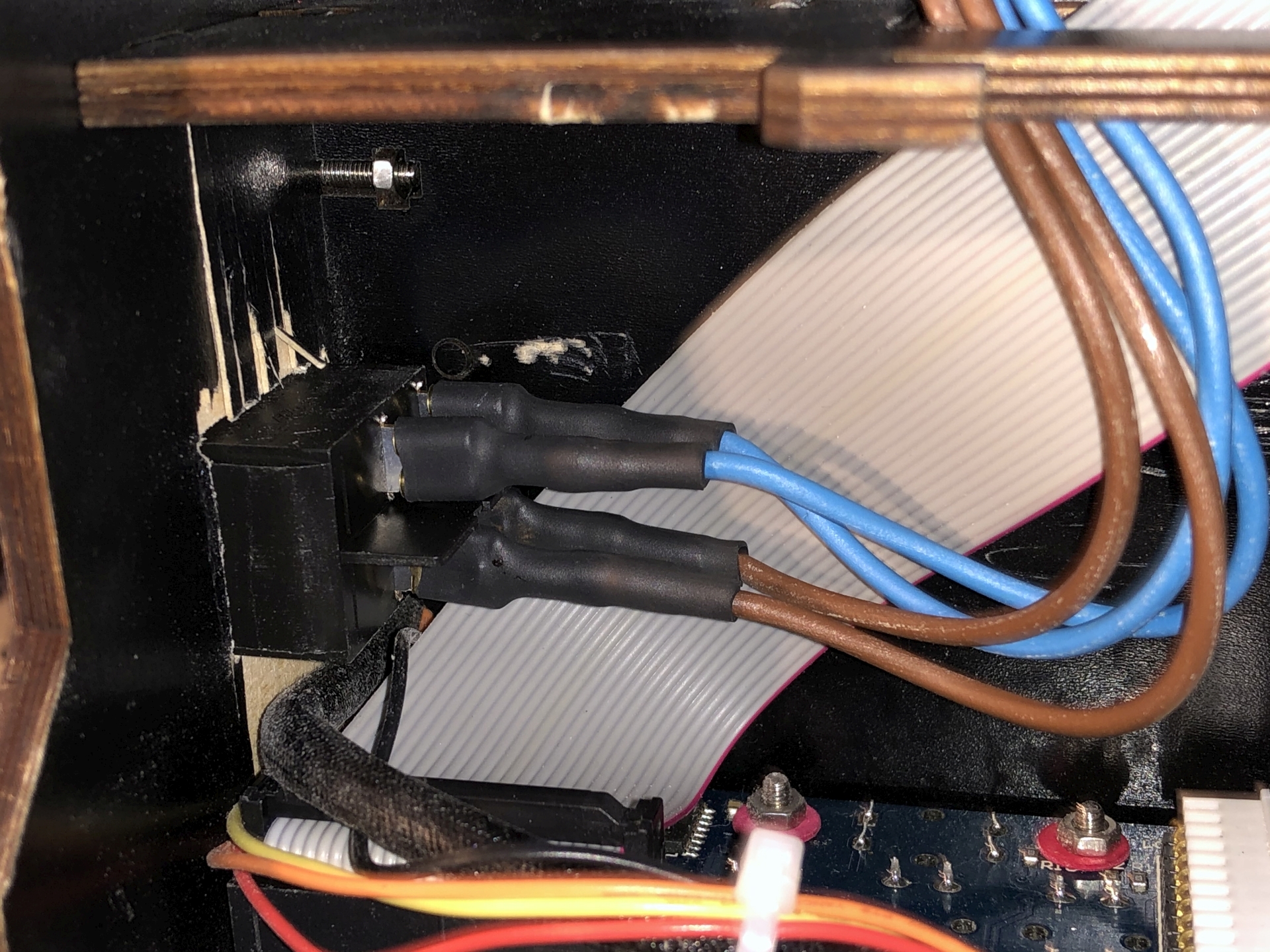 Well this post got out of hand. I only intended to write up the project from today but I just kept seeing projects I had completed earlier in the year and wanted to add them, fortunately I've made a macro in Notepad++ to make thumbnails so this isn't as much of a clusterfuck as it could've been.

First I did the upgrades to my CNC machine, which centred around a new spindle motor and holder, printed from carbon fibre reinforced PLA. 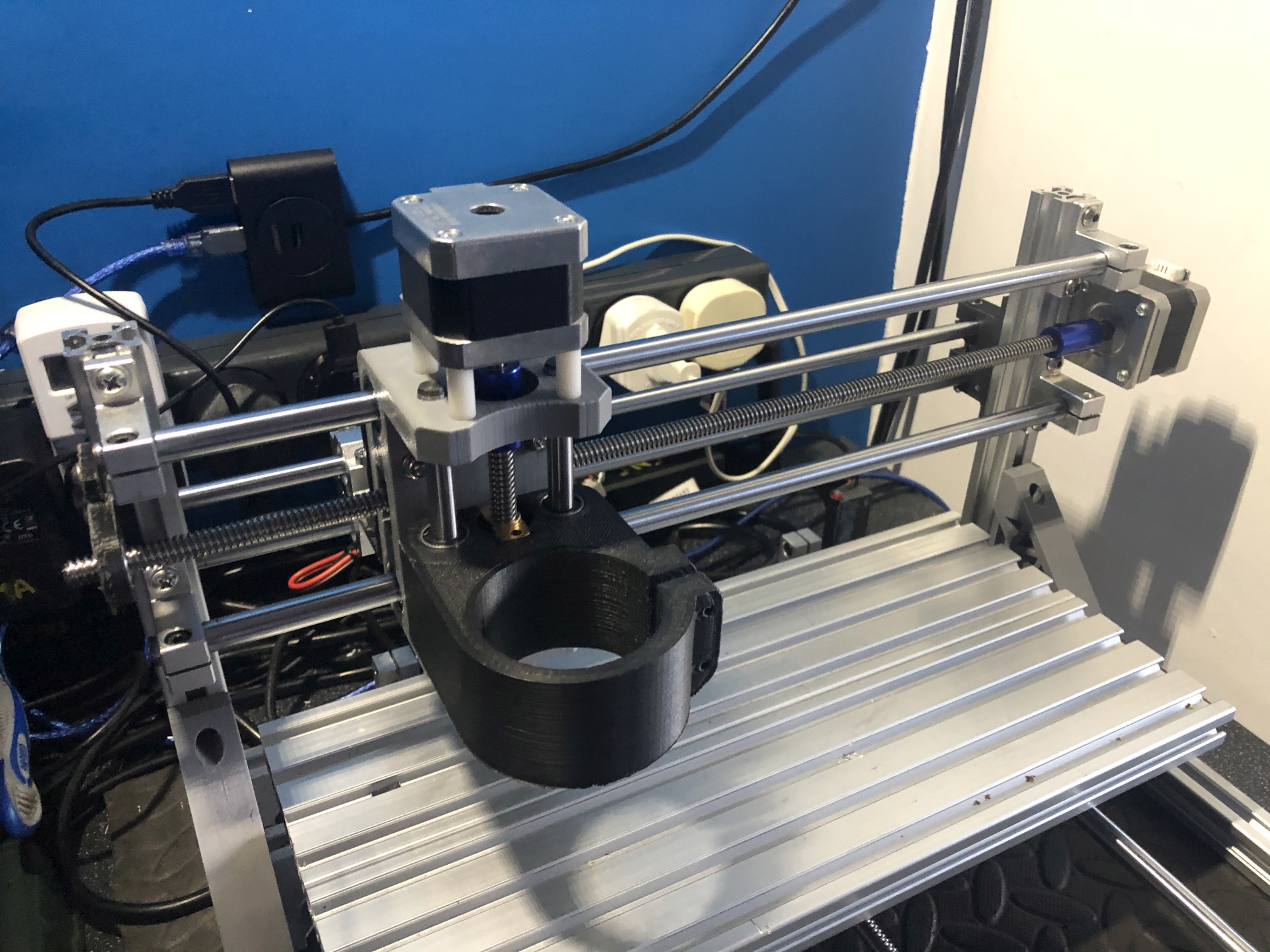 This is the same machine I have the laser head fitted to now, milling was still a bit scary and you can't crash a laser.

Second was a holder for an SSD bay thing built into my Fredde desk. I was fed up of the SSD from my Atomos Ninja V dangling from the USB adapter so made this to use some wasted space and make it so I can just slot the SSD in. The LED from the USB SATA adapter is carried to the front with some fibre optic tube, I still have quite a bit left over from adding a bit to my keyboard to illuminate my caps key. It almost works too well, it's very bright. 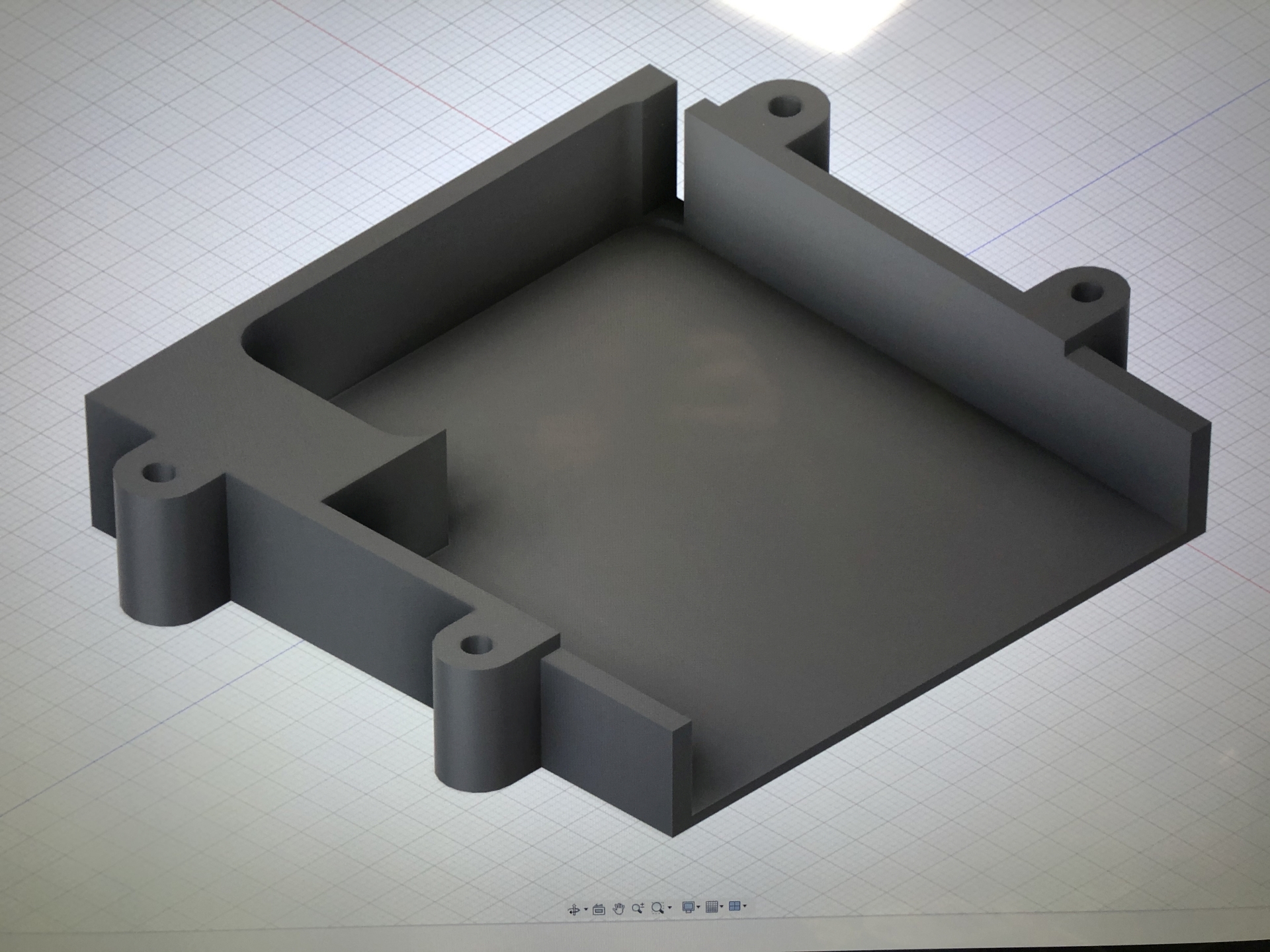 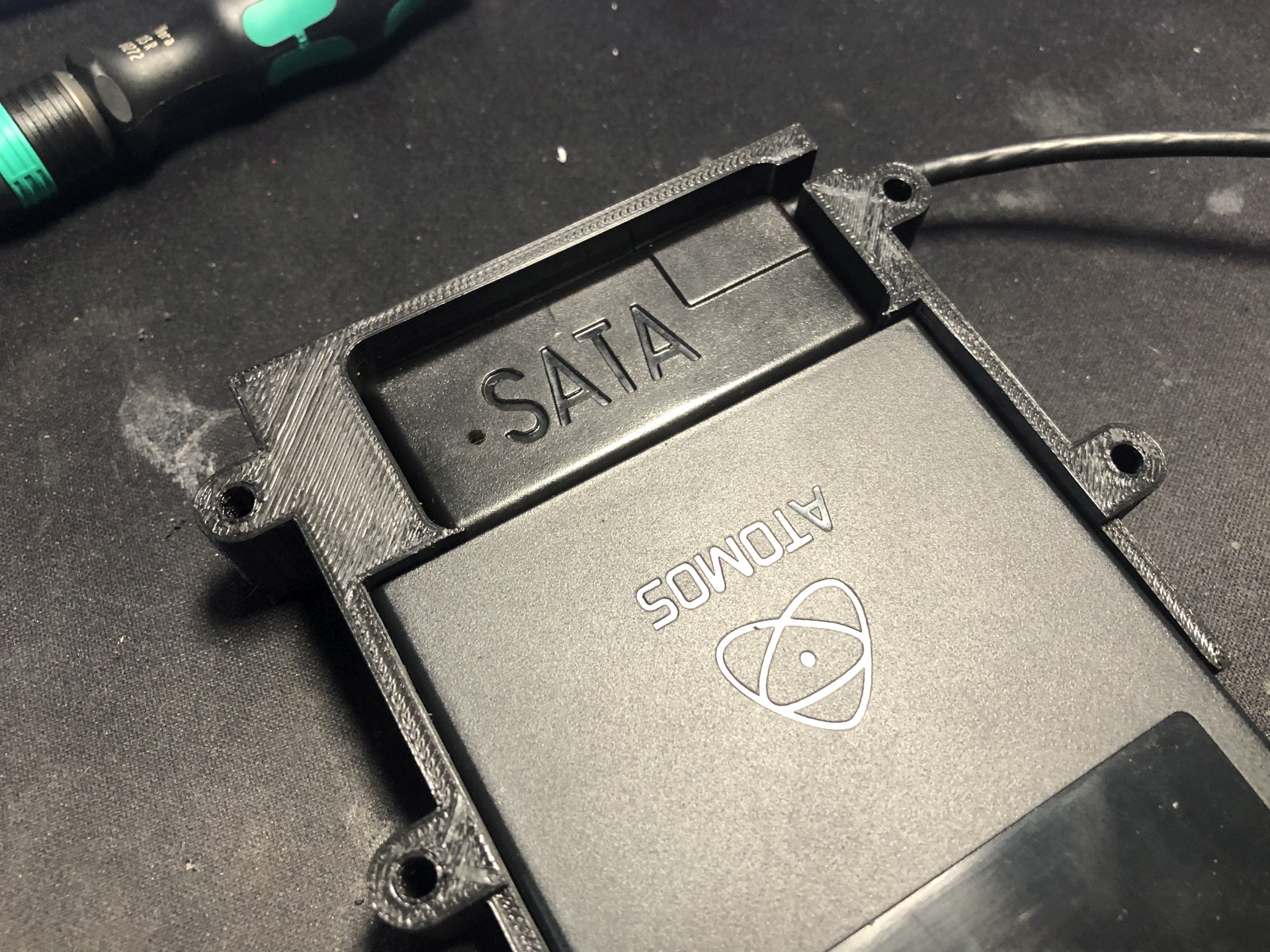 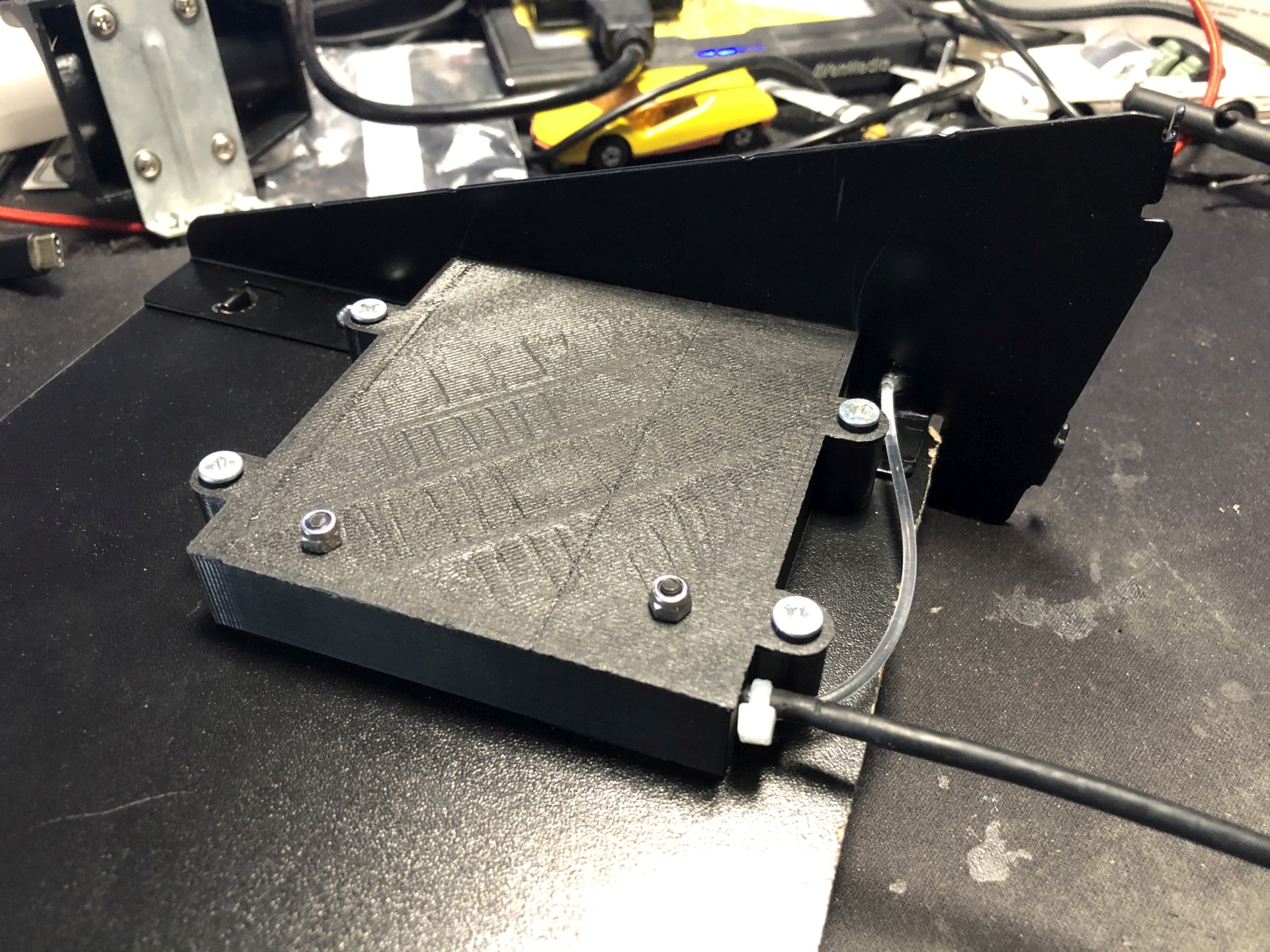 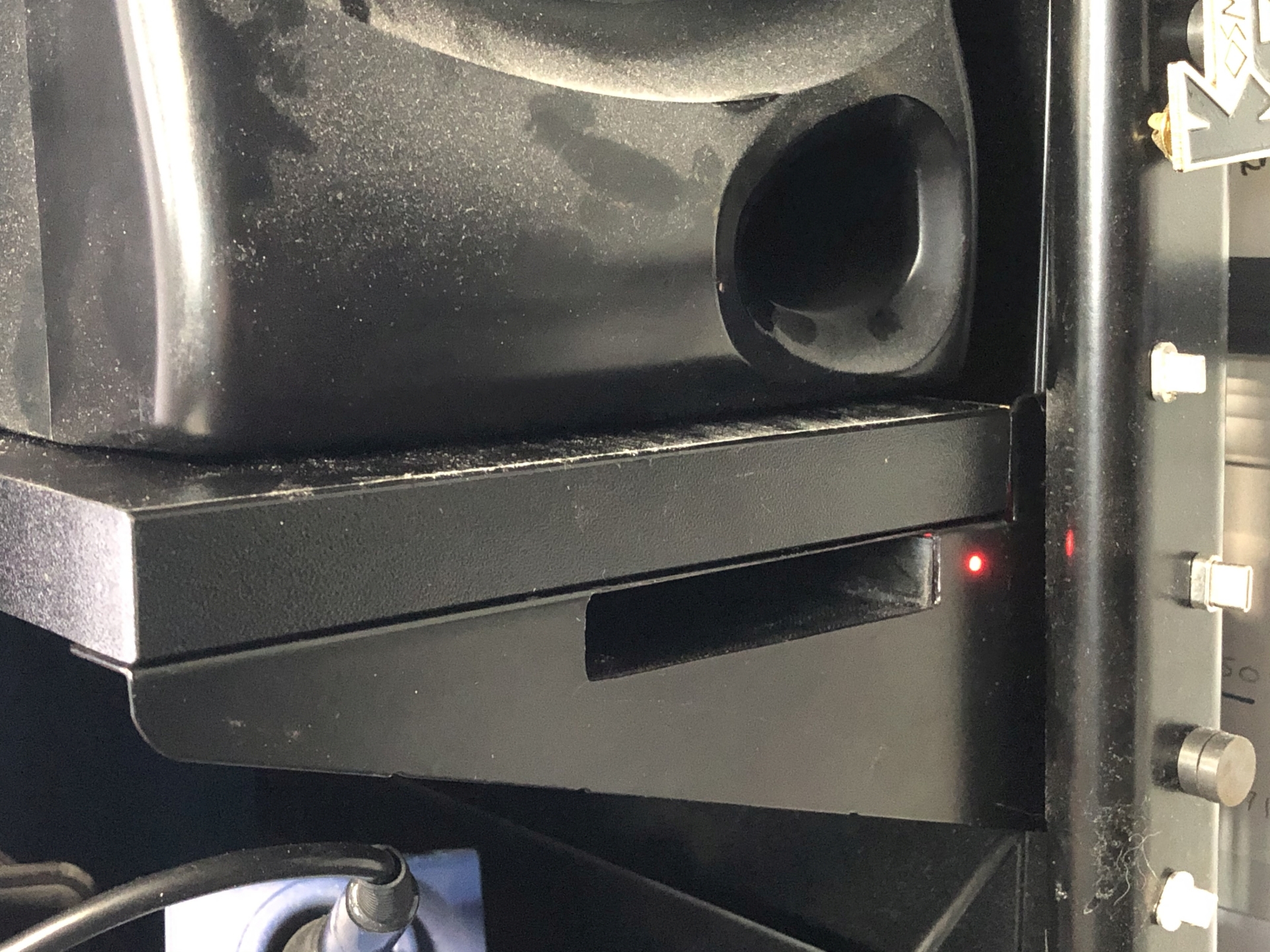 Next was a set of 'hubs' for the wheel hangers I have in the garage. The centres of the Tesla 20" alloys are much larger than the hangers so when hung they slump over backwards. I knew from the start that they would be in two parts and made some prototypes to get the diameters and steps correct.

As I was writing this I remembered that I had screenshots from Fusion so this whole thing got more complicated. I started by loading the bolts I had into Fusion from the McMaster-Carr catalogue, very sadly they don't supply the UK but you can still load 3D models from their vast range. Unsurprisingly they had the simple M6 bolt I was using at the right length so I imported it and modified it to remove the threads, bring the previously threaded part down to the tapping diameter for M6 and extend the head until it stuck out. Once subtracted from the existing model this would create the void for the bolts. As you can see, the bolts only just fit inside. 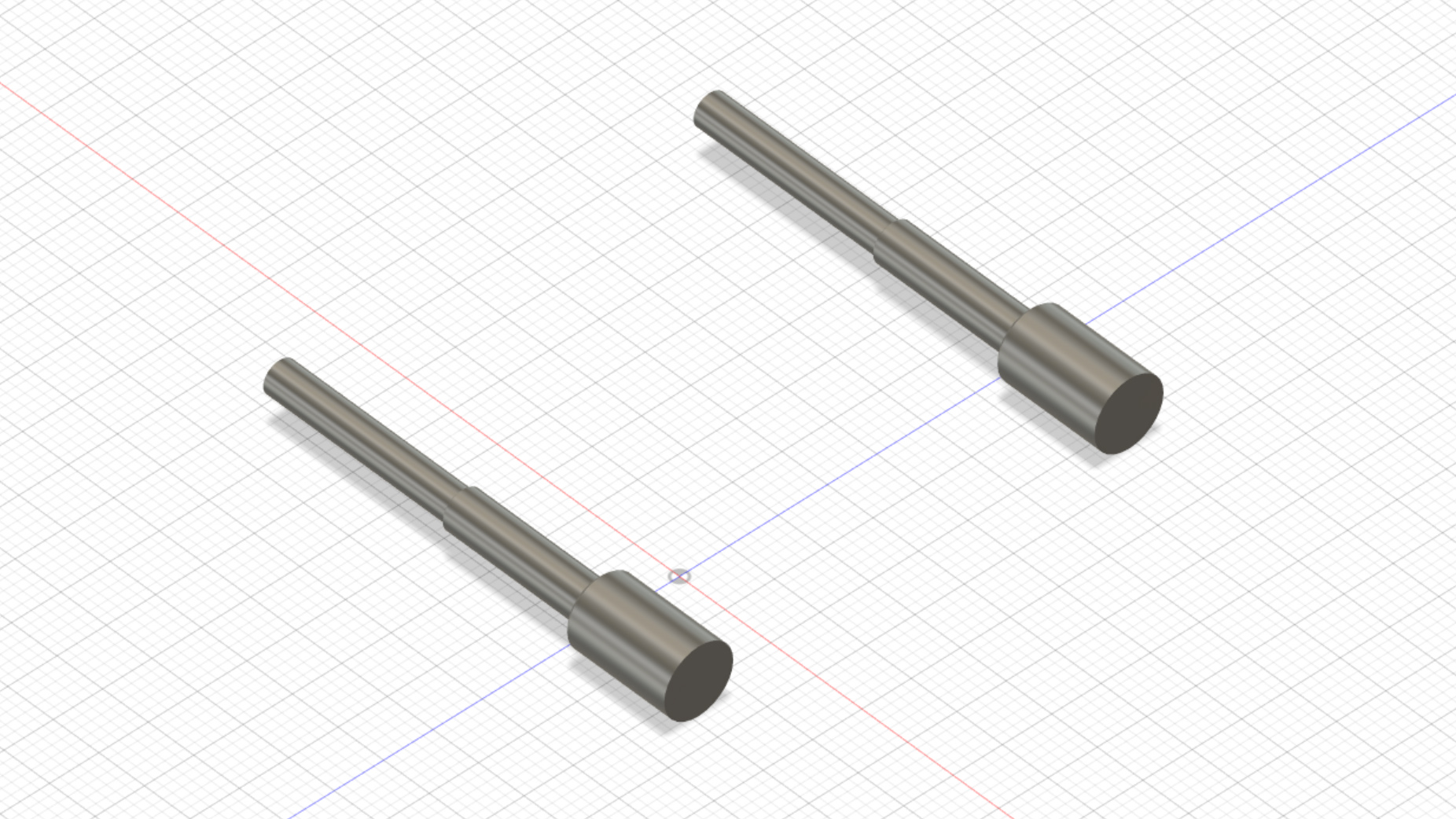 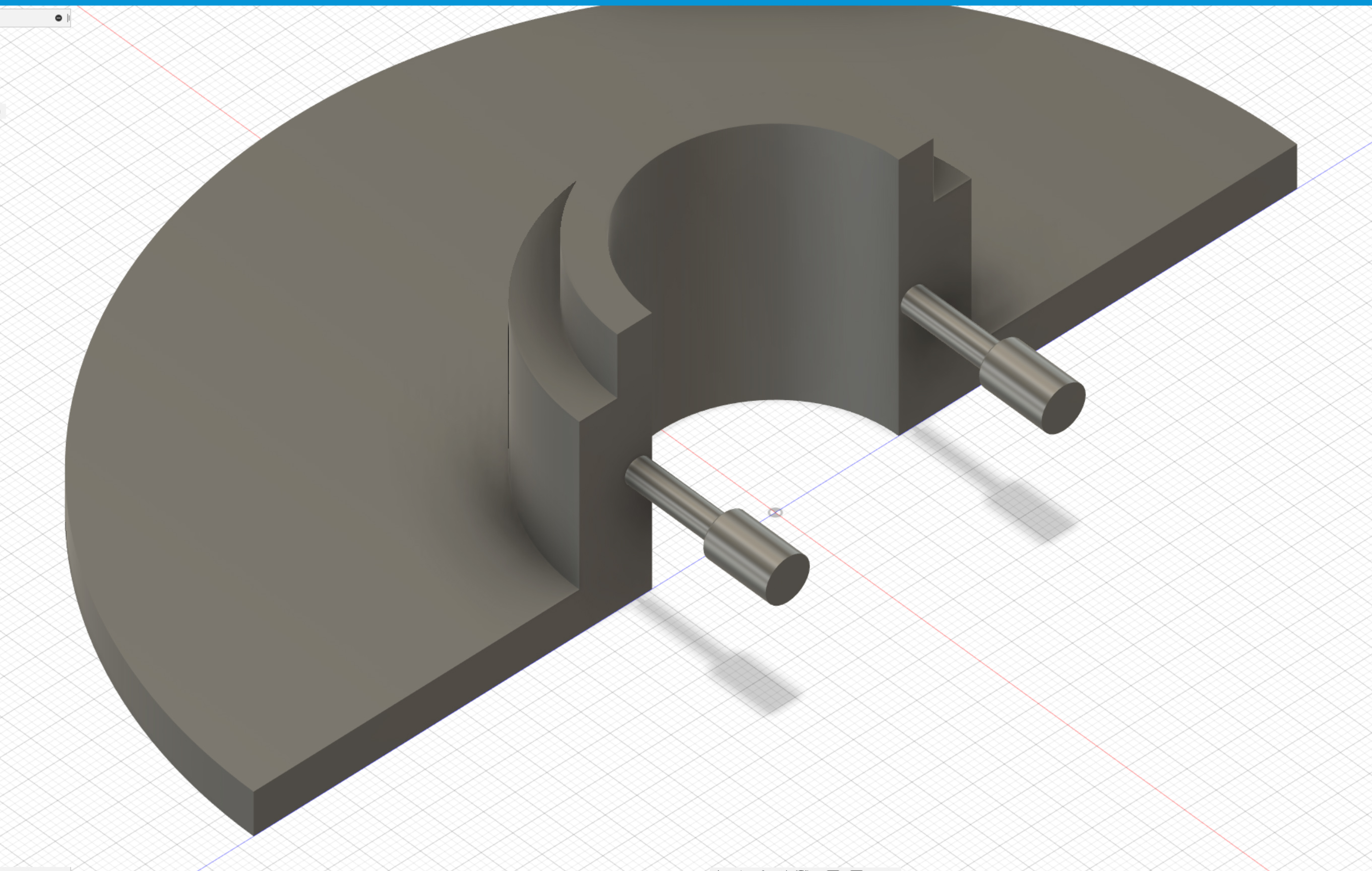 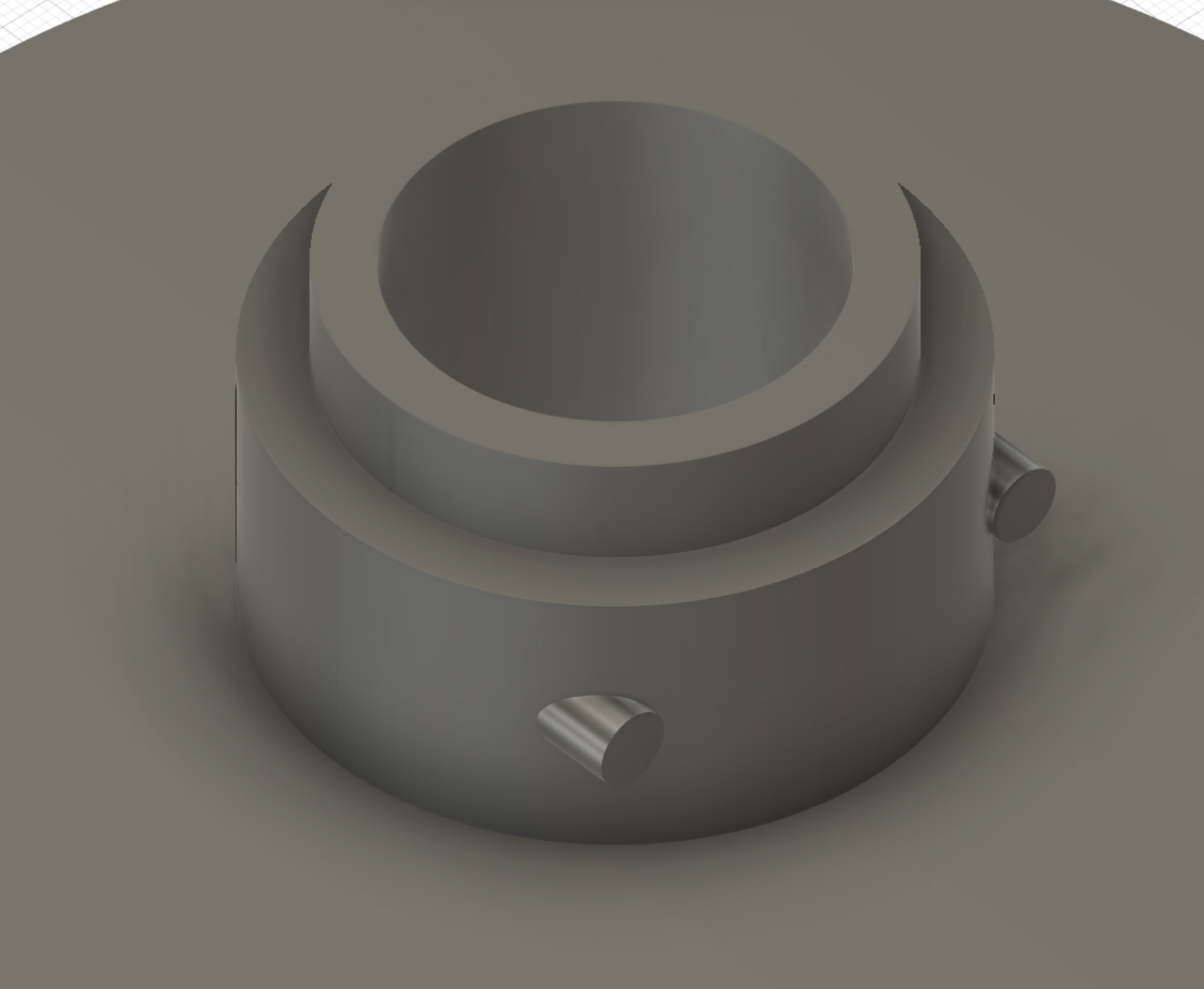 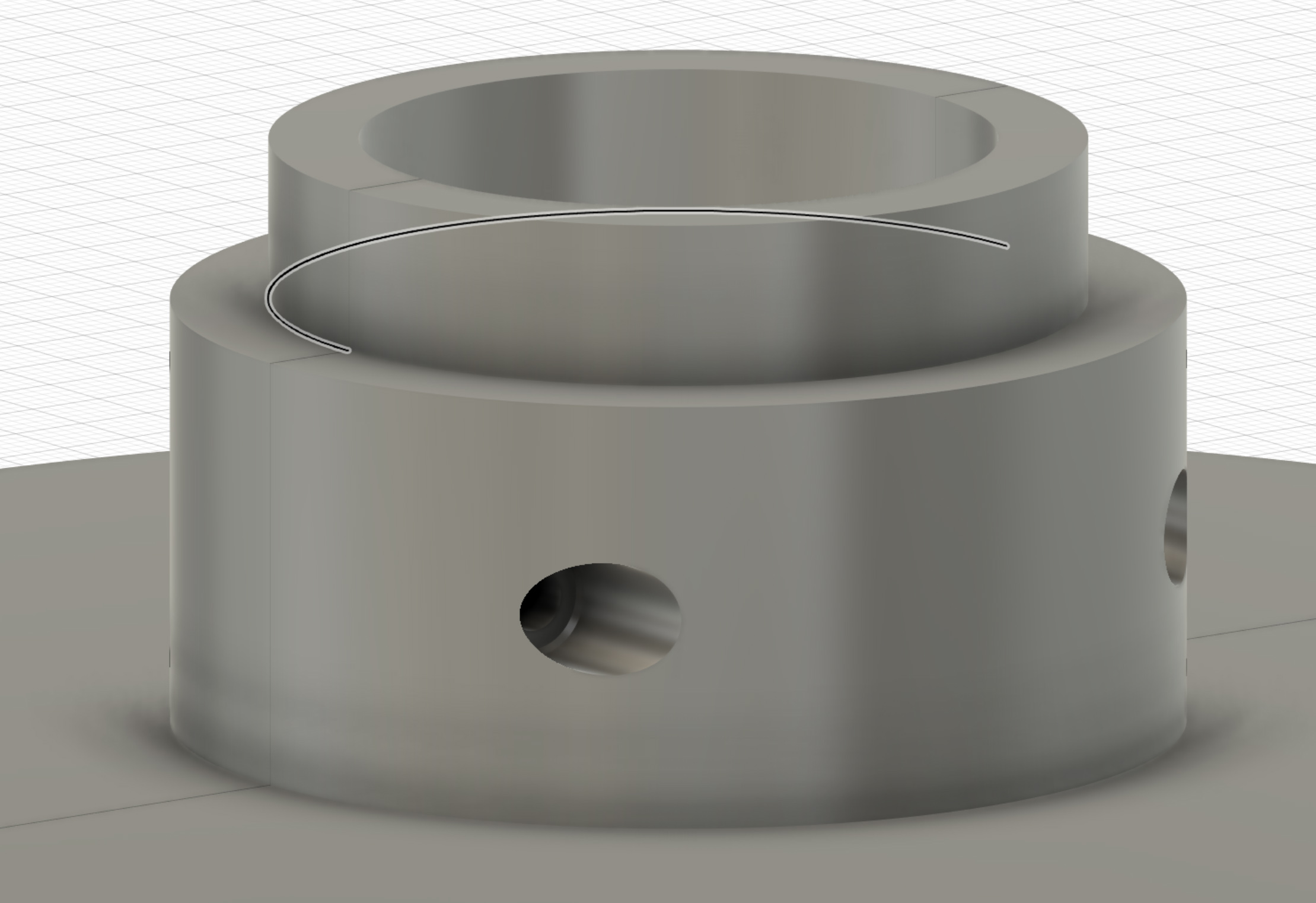 Fitted onto the garage wall. 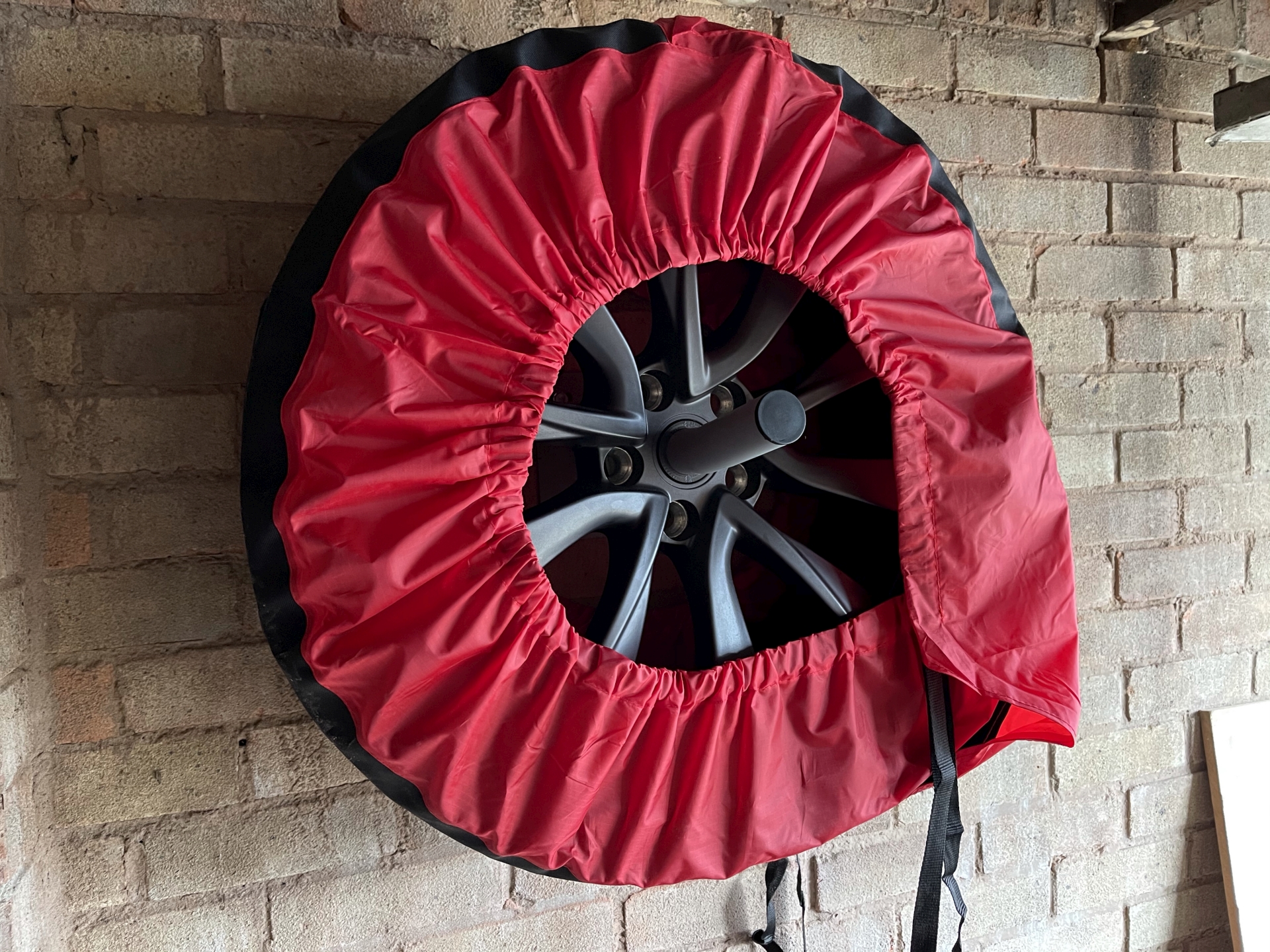 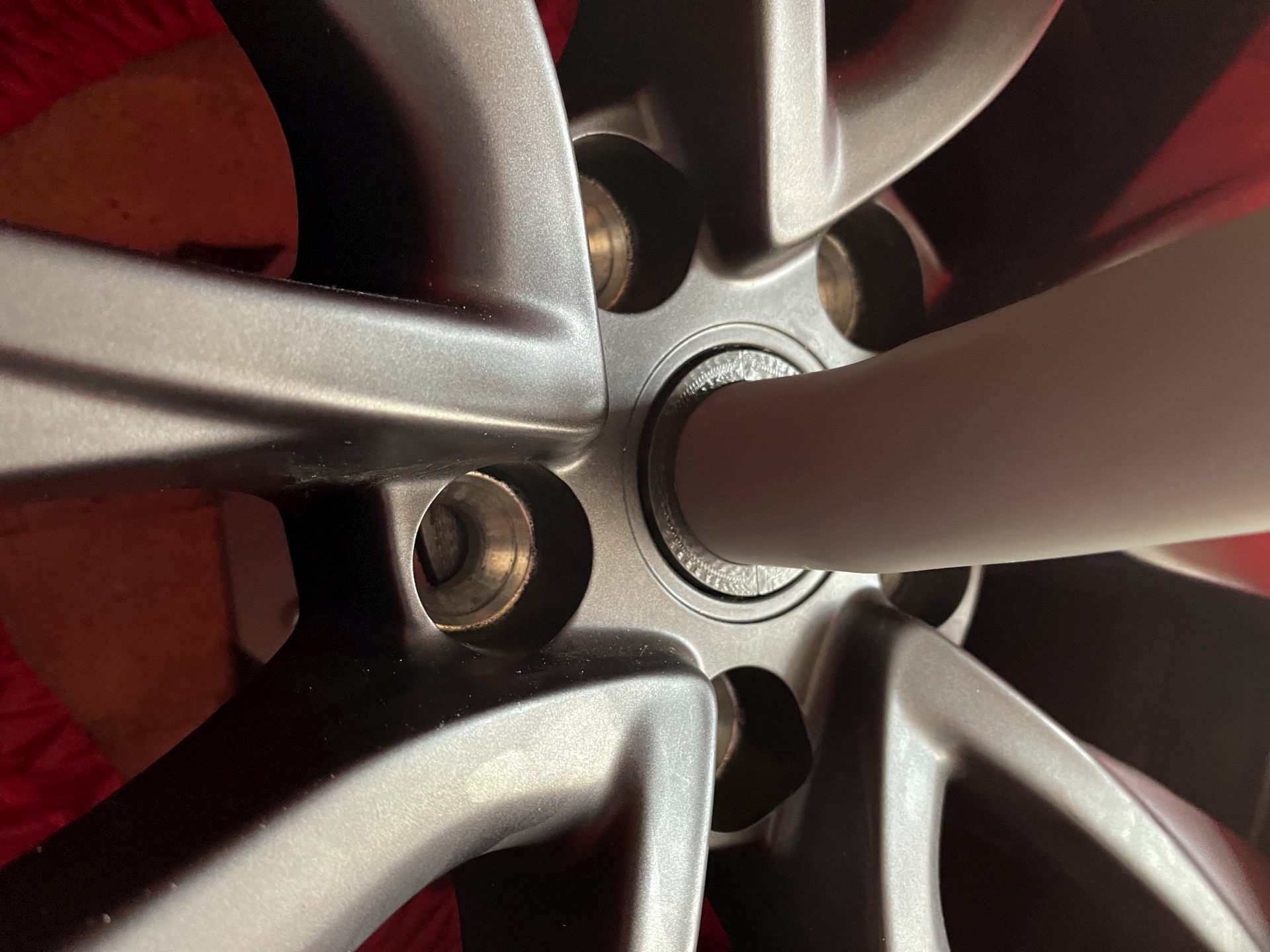 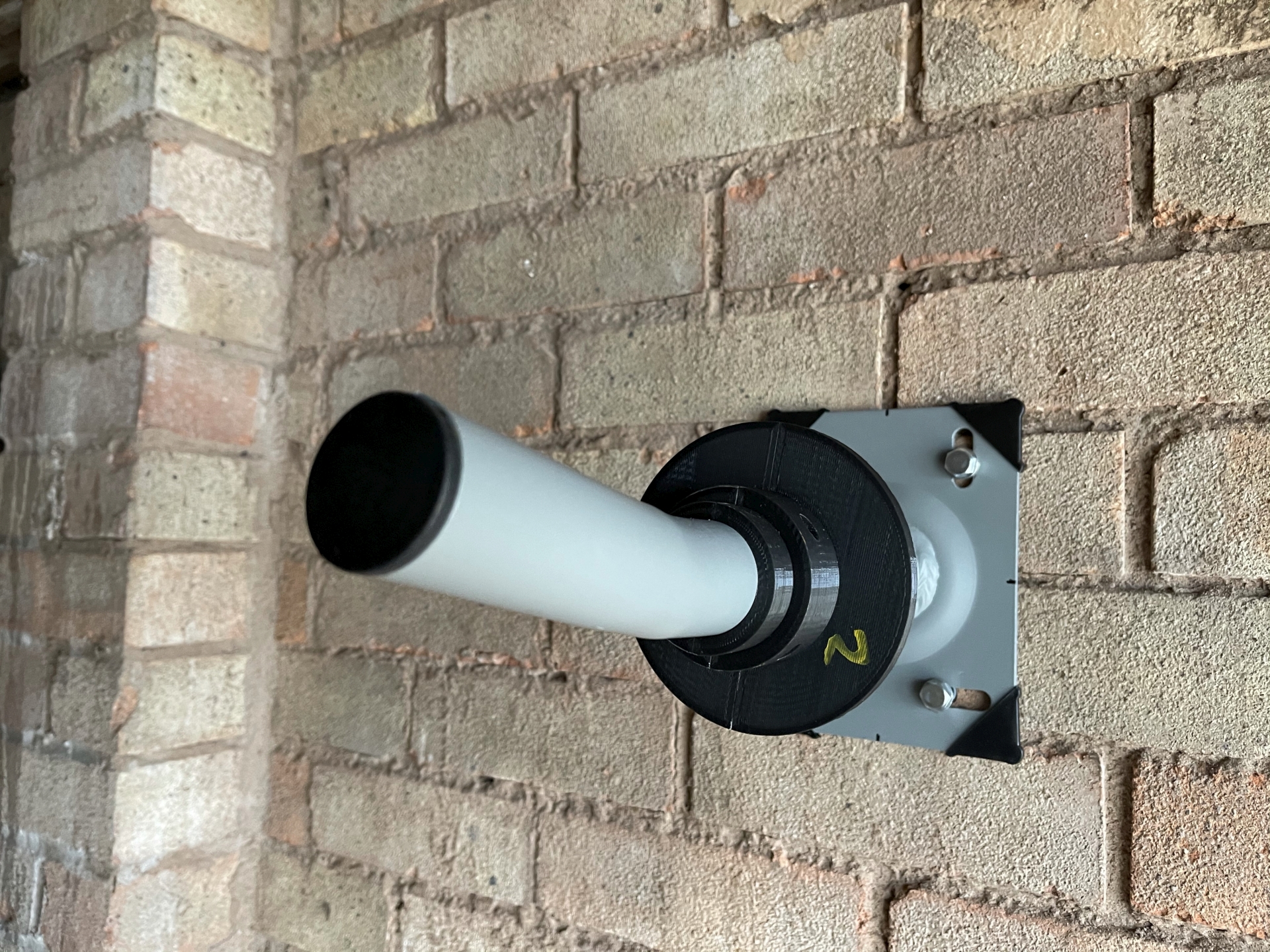 With an extra hole added and a bolt through to a drilled and tapped hole in the metal tube, this is to stop the thing moving when I tried to put the wheel on. It was easier than trying to make the fit tighter. 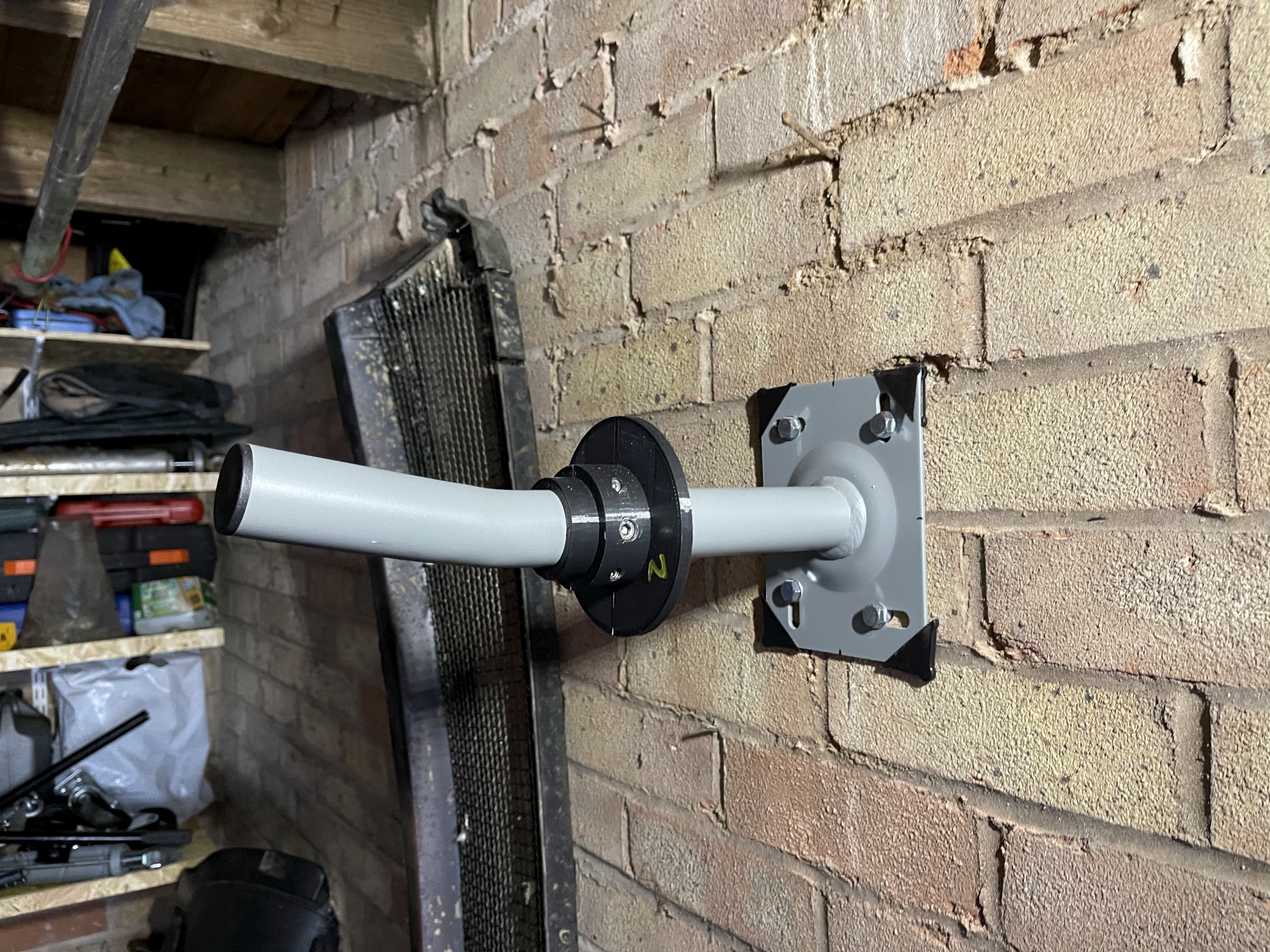 Finally onto todays project, I got some Edding 751 fine paint markers for Christmas and needed somewhere to put them. I already have a couple of Edding 750 fat paint markers which are great but they float around on my desk and sometimes get knocked off with other pens, adding another 10 to this would be a disaster. Time to solve all three issues at once. 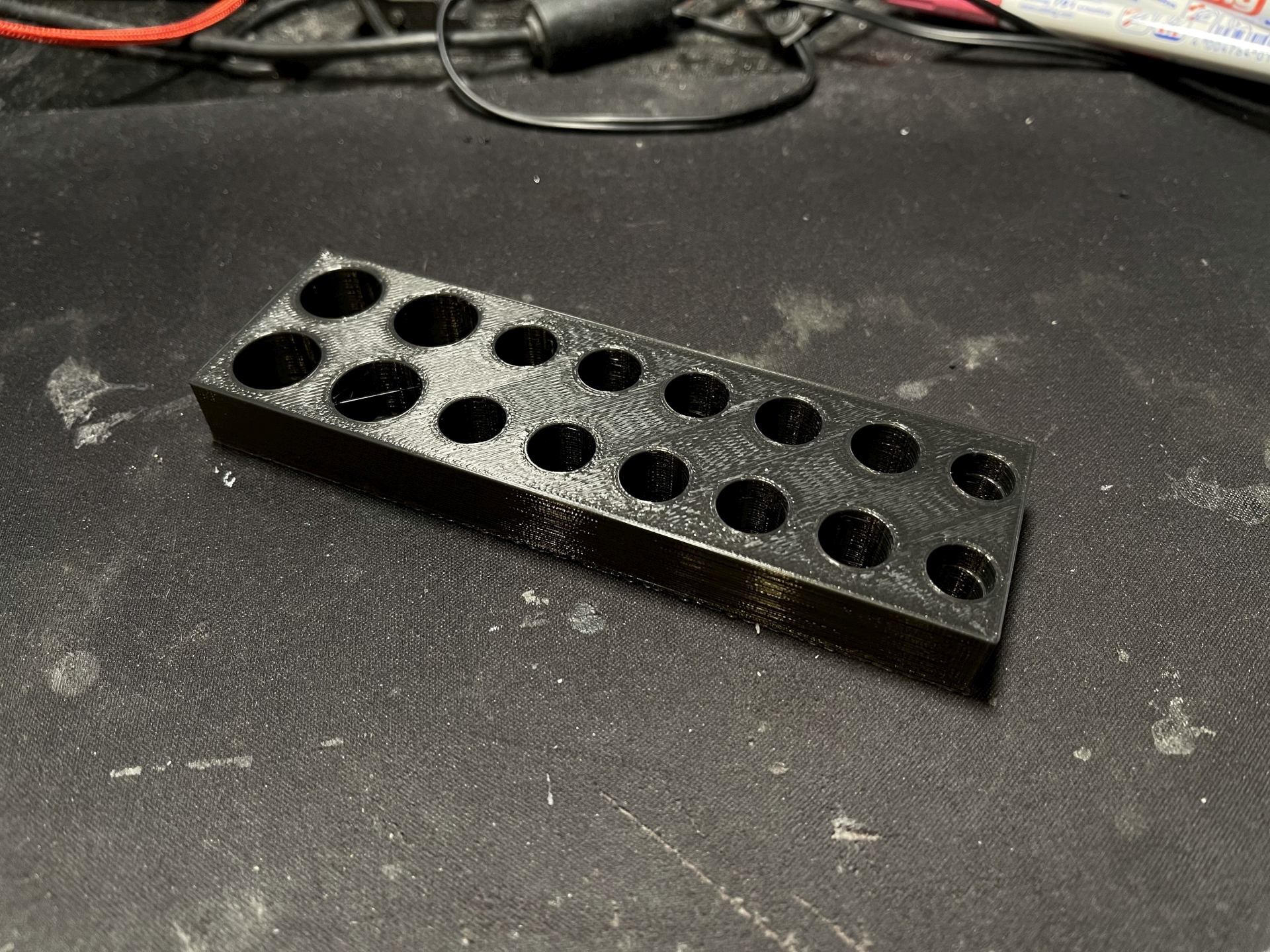 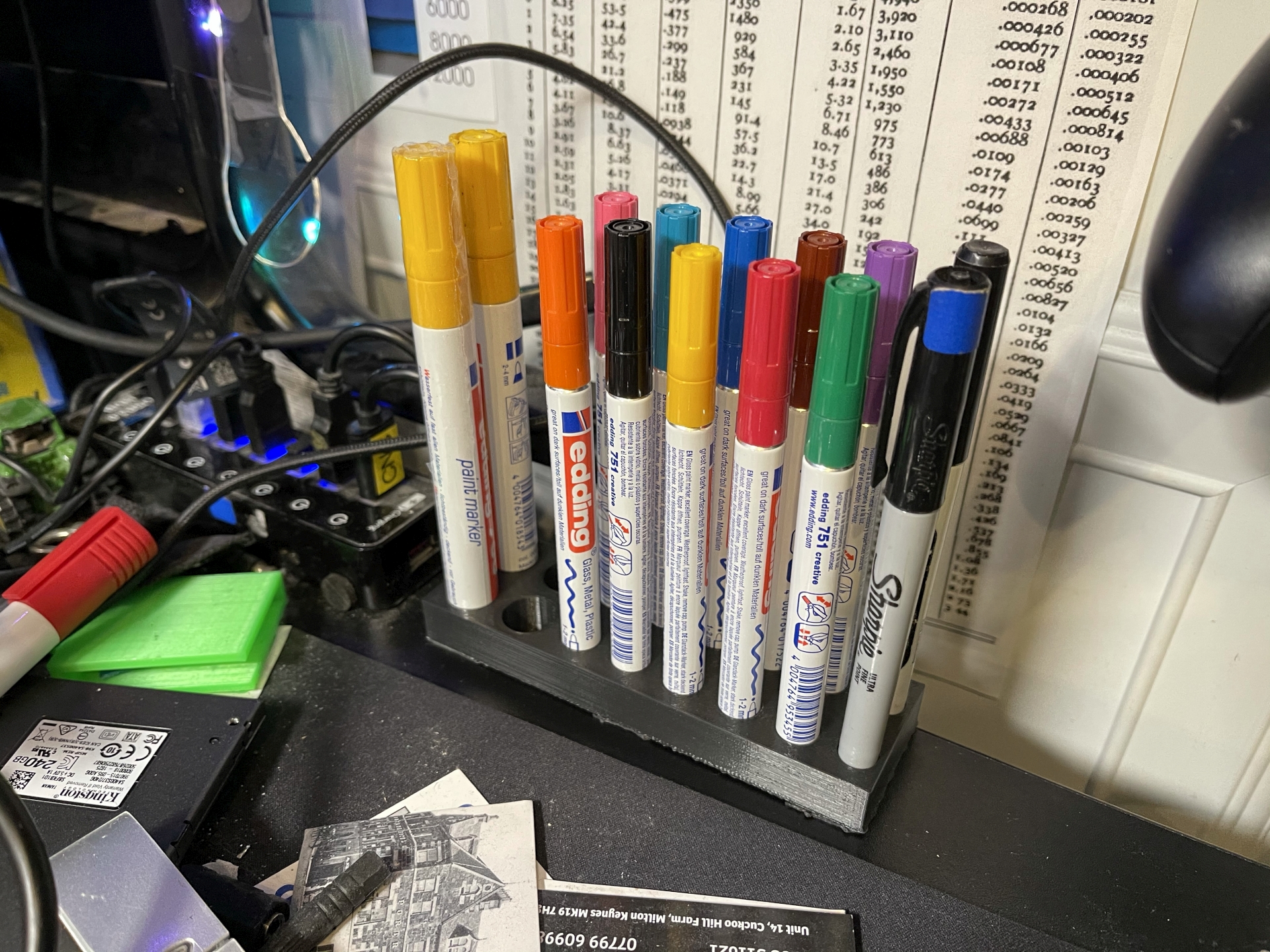 I did a few test parts first to get the fit right before printing the whole thing, also added stepped holders for my thin sharpie and whiteboard marker.

Trivia time: The business card on the left in the second image is for the hotel we ate at in Portree, Isle of Skye during the 2016 roadtrip, the SSD is a crappy Kingston one, don't buy one and the memory stick you can just see in the bottom left is 64MB and from 2005 or something. So much junk on my desk and it all has a story.

Damn, it's been long enough that I nearly forgot I ordered the damn thing. Should arrive some time this week, then... print all the things!

Well, that was quite quick actually - picked up the box from the local delivery location back on Wednesday. It sat around teasing me since, didn't really have the time to get to it - but today's the day.

It comes with printed (and nicely so) instructions, but they are also available online, and I prefer having them on a large screen vs. a small-ish printed booklet. Also, some preparatory steps are made much more clear in the online version:

This is not the Haribo I was expecting.

So this went together rather nicely. About 6 hours of work in a single evening, could be done faster but I took it slow and thorough.

The kit is somewhat pricey, but you quickly see what you pay for: everything is immaculately sorted, packaged and labeled, with nothing missing and even a bag of spare nuts and bolts included. Printed parts are of good quality and mechanically very robust, which is kind of the whole point. The online assembly manual is great, with high-res pictures of every step and hints for various details and techniques, and includes user comments - some of which are very handy, it seems that the same few steps that caused me some trouble did so for many other people, and good solutions were found.

Assembly finished, double-checked all the wiring (really not much one can get wrong there, the connectors for everything are differnt and mostly foolproof... still, better to be sure), plugged in power and turned it on. USB stick included with the kit already contained the newest firmware, released only two weeks ago (v4.3.1) - seems these kits don't take long between packaging and shipping off Printer board came with v4.2.1, so a quick update, then about 3 minutes of various self-tests (axis movement, heaters, fans), and it's ready to print. Top notch user experience.

Tried some calibration prints first, they came out near perfect. So instead of gradually moving to more complex stuff, I decided to dive right in, and sliced up some D&D minis that I tried a long time ago on my Anet A6 and utterly failed. Several hours later (including one failed attempt due to me overlooking an unprintable slicing output, derp), results!

As scale reference - these are standard D&D minis, the base plate is 1in for the archer, slightly smaller for the bard. So the details are tiiiiny. And these are pretty much the default "0.1mm DETAIL" settings - the printer can go even lower with the layer height, and there's a lot of fine settings people who print minis a lot recommend fiddling with. All in all, I'm a very happy customer

Pretty sure the Anet will be going away now - the only downside of the Prusa is the smaller print volume (18x18x18cm vs 22x22x25), but in every single other metric it's way better. More precise, quieter (the motors make next to no noise, except the geared extruder when doing quick retractions, it's amazing), better usability with the color screen (it even shows sliced file previews!) and smooth menu navigation, magnetic PEI sheet bed for super-easy detaching of finished prints... basically it's in a different league.


93Flareside said:
This is not the Haribo I was expecting.
Click to expand...

There was a pack of Haribo bears in the box, and the instructions portioned them carefully, allowing (instructing even) to eat some after each major step is completed. I'm actually impressed, the bear amount matched up _perfectly_ - I honestly thought these bags are just weighed up and the actual number of bears varies, but apparently it's more precise than that.

One thing of note for anyone considering the Prusa Mini+ or one of the other Prusa printers: don't use the USB stick included in the kit.

In the first few days I've used the printer, I've had several firmware crashes with a "watchdog reset", which fails the print.

Thankfully the firmware is well-designed and even in a crash the printer is immediately "safed": motors stop, heaters turn off, and fans turn on full to cool the hot parts down asap, and it stays like that until manually rebooted.

I've researched the issue, and it appears than in most cases it's caused by a faulty USB drive that the print is running off of. Indeed, the original Prusa stick gets quite damn hot during a print - it's all metal, and gets almost uncomfortable-to-touch hot after an hour or so. I've switched to an older A-Data 8GB USB3 stick I've had laying around, not a single issue over many hours of printing since then - it gets a little warm but nowhere near as hot as the OG stick, and the prints seem to run reliably.

The "power loss recovery" really thrashes flash drives/sd cards with the continual writes.. I switched over to using Octoprint with a Pi3 and a pure-sinewave UPS.

I don't think my printer even has any recovery options, it has crashed a few times in 4 years but I've never lost power while printing. A UPS makes sense though. I hope printers will one day have the ability to laser scan and it will become an additive process, would be great for continuing prints or for repairing things.

Decided it is time to throw some more upgrades on the old Ender 3; BLtouch and new build plates are on the way. It's always been a fussy printer, with most jobs going on my Sidewinder X1 over this..

My old CTC printer seems archaic compared to these new ones but it keeps plodding on.

I knocked over one of the resin bottles for the Photon the other weekend and didn't realise that it leaks, fortunately it was in a cardboard box so didn't make too much of a mess but it was bad enough. Walking around a room with a UV torch setting any drips was weird, I can't deny it and that stuff smells burnt even when it's still liquid.