Jeremy drives modernized Lancias, James does a historical piece on the Porsche 917, and they look to speed things up at the airport.

The old Porsche vs. new Porsche was great. And the airport bit was unexpectedly interesting.
Going fast out of rage, pride or boredom is like buying a ticket to crash.

The Integrale was cool, and the Ferrari Stratos was awesome...but man does it have sad eyes! I hate that look.

Great Conversation Street. Loved the part about the speed camera!

The Porsche piece was impressive, much like other historical ones this season. They really add a lot to the show. Hoping for one on the WRC or Dakar. James looked so funny when he said "let's find out!" 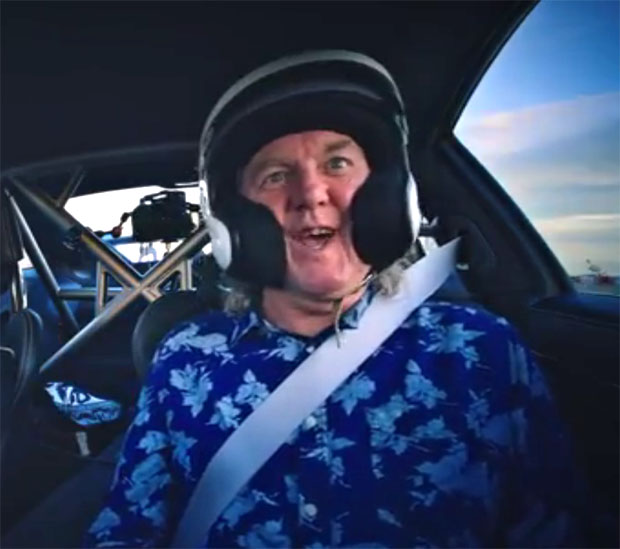 Would've been fun following Jeremy around to hear his rants in the airport, many details of which I didn't know about, not having been on a flight since 1998, back when things were simpler. (and the airport I left from was fairly small) I can see Abbie going much faster than Jeremy on the suitcase because she weighs 1/4 as much as him, but what's with the lapboard? Anyway, fun piece overall.

I had a smile on my face much of the time, and I'll give this a well-earned 9.

Lancia film was brilliant. Love the Delta but the Stratos was just another level. And the soundtrack they used when introducing the new Stratos... looks like the sound editors finally got the hang of it.

Conversation street was good. The police ramming moped theives was straight up GTA. And that cheeky little poke at Argentina.

Porsche 917 segment was amazing. I'm a huge Porsche fanboy and seeing the GT2 RS and 917 racing at the end was a pleasure to watch.

The airport film was surprisingly good and full of laughs. Jeremy's ranting, though planned, was relatable and funny. And if the suitcase vs laptop race itself wasn't enough, Jeremy crashing into things (and people) and finally falling off through the tunnel just had me laughing out loud. Tbh I've never laughed this much in any other Grand Tour episode for sure. For that alone I'm gonna give it a 10/10.

Yeah this was good. I really enjoy how they do this segments on old cars or brands but interview people from the time it happened. It really turns it from just another story to something tangible.

2/3 of the episode was good, 1/3 was mehhhh
The porsche and Lancia segments were very good.
The Conversation street with that police dashcam footage, was hilarious
The airport segment, although I agree with some points that Jeremy have said, was average.

Mongolia Special is next, and since they're building a car, I hope it's going to be like the Caterham they build a few years ago (James organizing tools, jeremy shouting at him, etc etc)

After den Lancia segment I gave the episode already a 10/10
After the Porsche segment it was a 11/10
I laughed so hard on Conversation street 12/10
And then the Airport that reminded me of Caisey Neistat and the episode went out of the charts.
H

Not bad by any means but reminded me very much of an end of season episode where they are throwing in whatever films they have left. As a result, the episode as a whole felt a little bit disjointed.

And why has it taken so long for them to pick up on bike thieves being knocked off by the police? That made the news last year.

This is the first time "The Grand Tour" felt like an episode of "Top Gear" to me.

I feel the BBC had a moderating influence on the team (The Three Amigos and Wilman) that Amazon has not and that moderation resulted in a more stronger show.

Kiskaloo said:
This is the first time "The Grand Tour" felt like an episode of "Top Gear" to me.

I feel the BBC had a moderating influence on the team (The Three Amigos and Wilman) that Amazon has not and that moderation resulted in a more stronger show.
Click to expand...

Yeah that’s been mentioned which you really do see now that they’ve got complete freedom. It’s weird, isn’t it?

I liked this ep very much. The airport bit was a bit silly and felt disjointed, but since they ranted about exactly what I hate about flying (or rather, about getting to the bloody plane in the first place), I'll let that slide.
The rest was epic. I need those "Lancias".

We'heyyy! I really liked it.
The first films were so good that I really wouldn't have minded an average filler at the end, but the filler turned out not to be too shabby either!
Jeremy's rant was epic.
And the in-public'ness of their toy rides was strangely enjoyable. (hmm this sentence sounds wrong...)

"Two things with the same name don't necessarily have to be confused. Like 'Hammond' can mean a massive organ, or it can m... oooh yeh."
C

Another solid episode. Every one this season has been excellent. The Porsche segment was the highlight for me—LOVED the old/new race at the end of it.

Solid 9. I want that Stratos, but in a nice colour combo and the 917 race was nuts. James always does pieces like that complete justice. Even the silliness at the end was hugely enjoyable, mainly because although the ideas were bonkers, they tried to get them to work and the race between Abbie and the boarder at the end looked really cool and great fun.
WillDAQ: To use the technical terms: "the Mustang is to aerodynamics what horse shit is to fine dining"