Yes, my cheap fender eliminator/license plate holder is crap. I didn't install it, it came with the bike and I have a stock fender on the way.

Other points:
1. That was low throttle acceleration.
2. The 700's a quiet bike in its own right, but the 919 is literally quieter than the noise of the wind at, er, whatever speed we were going.
Last edited: May 30, 2011

Wow, that was a shitty plate holder alright. Thing was flappin like paper. I never understood the whole "fender eliminator" deal. I guess getting your back covered in grimy puddle water is the cool thing nowadays.
2005 Saab 9-5 Arc wagon
1999 Yamaha V-Star 650 Classic
2007 Suzuki V-Strom 650

Damn, reading this kinda makes me want a bike...

Thanks - but it's not like motorcycles are black magic or anything...

That's a nice bike, congrats! (I say that, even if I know nothing at all about them lol)
Click to expand...

Not only can you have more fun, but also save gas, even if you ride rather uneconomically

Not only can you have more fun, but also save gas, even if you ride rather uneconomically
Click to expand...


It gets decent mileage even then, yes. 0-60 blitzes consume very little gas on most bikes.

Though somehow CrazyJeeper managed to get it down to 28mpg on a recent tank. He kept going in and out of initial acceleration enrichment, though.

Not only can you have more fun, but also save gas, even if you ride rather uneconomically
Click to expand...

Crazyjeeper said:
Well, there is a limit to that last point. The 919 with me on it got down to 28mpg.
Click to expand...

OK Spectre, so if you had to install a chain oiler, how was it lubricated before? Or it wasn't necessary?

normally with the help of a spray can, about once a month...

bone said:
normally with the help of a spray can, about once a month...
Click to expand...


More like every two days or less. It's supposed to be cleaned and lubed every 300-400 miles. I put that much on it in a couple of days, often enough.

Wow, chain drives really sound like they need a lot of maintenance. I assume belts are not that demanding?

maxtortheone said:
Wow, chain drives really sound like they need a lot of maintenance. I assume belts are not that demanding?
Click to expand...


Belts are low maintenance, but have their own problems, such as power limitations and rapid wear under certain circumstances (gravel, for example). Harley is one of the few makers using belts; most bikes are chain drive, then shaft, then far behind is belt.

Part of why bone said every month is because chains require less maintenance if you ride less, ride in cooler climates, ride in low dust environments, ride in rural areas as opposed to cities, etc. I ride a *lot*, in a hot dusty region of the world, mostly in an urban setting, so chain maintenance is a frequent PITA for me. Hence the oiler.
Last edited: Jun 1, 2011

(Second part of the oiler review.)

I now am approaching 750 miles with the Tutoro chain oiler on my 919. Overall, I am pleased by it but there are several improvements that could be made (perhaps as an extra cost accessory pack) to make this good product better.

First, some fitment notes. I got it a bit wrong; I should have allowed more flex on the tube by not fastening the top part to the swingarm. I've corrected this and now the hose doesn't want to come off after vigorous suspension exercise.

It's still using the tie at the chain inspection hole, it's just that the next tie is to the rearset instead of the swingarm. This gives it much better flex tolerance.

On living with the system - it does take quite a bit of initial trial and error to find out how many turns out of the screw equals the 'ideal' rate of one drop at the nozzles per minute in the manual. In my case, using the recommended 10W40 motor oil, it's about 1.5 turns out. At that rate, the chain gets quite a good lubing and the sling onto the wheel, tire and everything else is minimal, certainly not significantly worse than I got with some chain lubes in the past.

The flow rate does vary with the ambient temperature - it is slower in colder temps and faster in hotter temps as the viscosity of the oil changes. This can require minor changes to the flow setting by moving the knob - you'll have to work this out when the seasons change, etc. You may also want to give the flow rate a bump upwards when you know you will be traveling through especially dirty or dusty areas, or wet ones.

My chain seems happy; it's the cleanest chain I've ever had on a bike and I've recently been riding through nasty things like construction sites, where there is clinging concrete dust and the like. No complaints with its basic functionality. It is well worth the low $32 price and I recommend it heartily.

However, it isn't perfect. There are areas for improvement - at surprisingly low cost.

The first enhancement or modification that should be made to this system is cheap and simple. The manual states that the flow control valve (a screw) is coated in petroleum jelly or similar to lubricate the threads and to prevent leakage in hotter temperatures. It further recommends that should leakage occur, the user should remove the screw, clean it, reapply petroleum jelly and reinstall. This seems kind of silly; I recommend cleaning off the screw threads and using teflon tape to seal the upper 1/3 to 1/2 of the thread (nearest the knob end). This will permanently deal with the issue. Cost: $1.50 for teflon tape at home improvement center - of which 99% will be left over and usable for something else.

The second modification that should be made is the insertion of an inline petcock or shut-off valve, as pictured below. 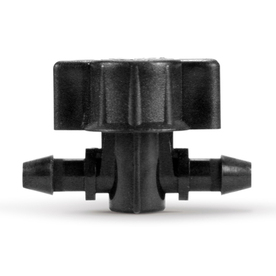 These are available for about a dollar per valve in the drip irrigation section of your local home improvement center. They are often sold in packages of three or four, so cost is $3-4.

The stock setup of the flow control valve doubling as the shutoff valve is simple and cheap, but it has the disadvantage of 'losing' the setting you've got it tuned to every time you stop riding and have to shut it off. Also, the multiple turns needed is slightly annoying. Installing one of these valves inline means you never lose your setting and turning it on and off is a matter of a quick quarter turn. It's also as simple as putting down some paper towels to catch the mess, cutting the hose at a convenient point and reattaching the two ends to the valve.

Finally, the reservoir empties in about 3-5 hours (5 hours to spec, but I've had it go in 3 hours when adapted to exceptionally dusty areas, etc.) This isn't a problem if you're back at base within that amount of time, but unless you want to carry a quart bottle of oil and the provided cheapie syringe/eyedropper thing (sealed in a ziplock bag) around with you to reload in the field, it's a bit of a problem with longer runs.

The solution is a small leakproof bottle or flask, like this one:

Cost seems to be about $1-5 for most of these leakproof bottles, which are intended to hold cosmetics, lotions or other potions for women to stow in their purses. (Men: These can be bought at the Container Store, so no need to go to EstrogenWorld to get one. ) These would be perfect for filling with the oil of your choice and stowing in your tank bag. Many come with that type of flip up nozzle so no funnel or anything would be needed to top up the reservoir. Depending on size, this could considerably extend your range. It would also make it easier to fill the reservoir in the first place as the included syringe is a bit messy, while transferring oil from the quart bottle into the leakproof flask (and thence into the reservoir when needed) would seem to be a cleaner and easier task as it could be accomplished on the workbench with a funnel, without the dip-squeeze-squeeze-wipe-repeat while sitting by the bike that the stock syringe requires. Less chance of foreign material contaminating the oil or the oiler, too.

That's pretty much it; I like the oiler and recommend it. I suggest obtaining the three items mentioned above to enhance the oiler's functionality and range further as well as ease of use. I further suggest that the makers/marketers of the Tutoro system consider packaging this stuff as an optional add-on so owners could conveniently get everything they need at the same time as the oiler.
Last edited: Jun 4, 2011

Rossco said:
Wow, that was a shitty plate holder alright. Thing was flappin like paper. I never understood the whole "fender eliminator" deal. I guess getting your back covered in grimy puddle water is the cool thing nowadays.
Click to expand...

My own objection to the 919 stock fender is how the reflectors aren't even vaguely integrated into the look of the bike; they look like an emergency afterthought. The rest of the fender looks more or less fine to me. However, since I live near a police station and there have been recent crackdowns on bikes with more coming, I needed to retain the side reflectors.

Here's what I got with the bike.

Here is the stock fender I recently obtained.

Sadly, my inspection sticker plate covers the relocated back reflector. Not a big problem; you can't see them in this picture because I erased the license plate, but I have a set of rear reflector-head screws holding the license plate on to solve the problem of the now-obstructed reflector. (We may be allowed to relocate the inspection sticker soon - in which case I'll need it again.)

Side reflectors are intact, but now they are tucked up higher in a position where they can do more good at night yet aren't nearly as glaringly obvious in the day. No need for turn signals in that position as I have an integrated taillight which takes their place. (Edit: Please note that my taillight is smoked, not clear, and is fully DOT legal.)

This way the stock fender actually hangs down less than my state-mandated inspection sticker plate. Plus no more flapping in the wind. I may relocate the license plate bracket up a bit higher to expose the rear reflector, too.

I also ordered Givi's crash bars and a Corbin seat (sans backrest) for the beastie this week. Putting the stock fender back on will also let me use the SW-Motech quick release rack system; that uses a bracket on the fender as the rear mount.
Last edited: Jun 26, 2011

If only the PO had invested in those crash bars...around the whole bike.

The Corbin gets here Wednesday and the Givi bars get here the same day or day after. In the meantime, I fitted the Hondaline windscreen I had imported from the UK some time back.