Ownership Verified: A Jeep joins the family! Welcome to the Bearokee!

As some of you may already know, I picked just picked up a 1996 Jeep Cherokee XJ since I've decided that I don't want to drive the Mustang or Miata through the winter - especially if it will be as bad as last year's, as some experts are claiming. Initially the plan was to pick up some beater XJ for the winter then resell it in the spring, but every one I looked at had frame problems. The first one had a frame so rusted it actually split in two and the second one was hit from the side hard enough to bend one of the rails. After that I started looking at slightly more expensive ones in better condition that I'd consider keeping longer than one season - willing to accept one with some door and rocker rust (seemingly unavoidable) as long as the frame and floor was solid. Looked at a bunch of manual ones but the ones in my price range were total shit buckets while the ones in half decent condition were way over priced - one guy wanted $10k for a '95 4.0 manual with quite a bit of rocker rust and 323k miles on it. Yeah, good luck with that buddy.

Having reached out to all the reasonably priced XJ ads on my local Craigslists with varying degrees of success, one day I got a crazy long reply from a guy going into very fine detail about absolutely everything. I wasn't expecting sellers to reply to my in good unbroken English, let alone a novel. The guy told me to text him if I wanted pictures, so I did, and he replied back with 60-70 photos of the Jeep, every little rust spot, the lift kit in full detail, the tires and tread depths, and absolutely everything. This guy really knew how to properly sell a car. I arranged a meeting with him, went to be bank to have cash on hand if I liked what I saw, and drove out to meet him with jibduh (whom I've taken on other XJ scouting trips). The Jeep was in the exact condition he described it in. He told me a bit more about the truck, its ownership history, showed me all the paperwork he had for it. I was happy with what I saw. Idling there in the lot, it sounded and looked great, so I took it out for a quick spin. Drove absolutely perfectly. No steering wobble that's normally associated with lifted trucks, relatively quiet, no funny noises, 4x4 worked fine. I came back to the parking lot, kicked the tires a bit while I shot the shit with the guy, then threw out an offer I thought was reasonable. He accepted, I counted out the cash, and drove away in my new XJ!

First shot after I bought it And now more pictures from today, when I finally had time to see it in the daylight in all its majesty for more-or-less the first time (thanks winter daylight hours :shakesfist.

First a family shot of the Jeep with her new sisters! 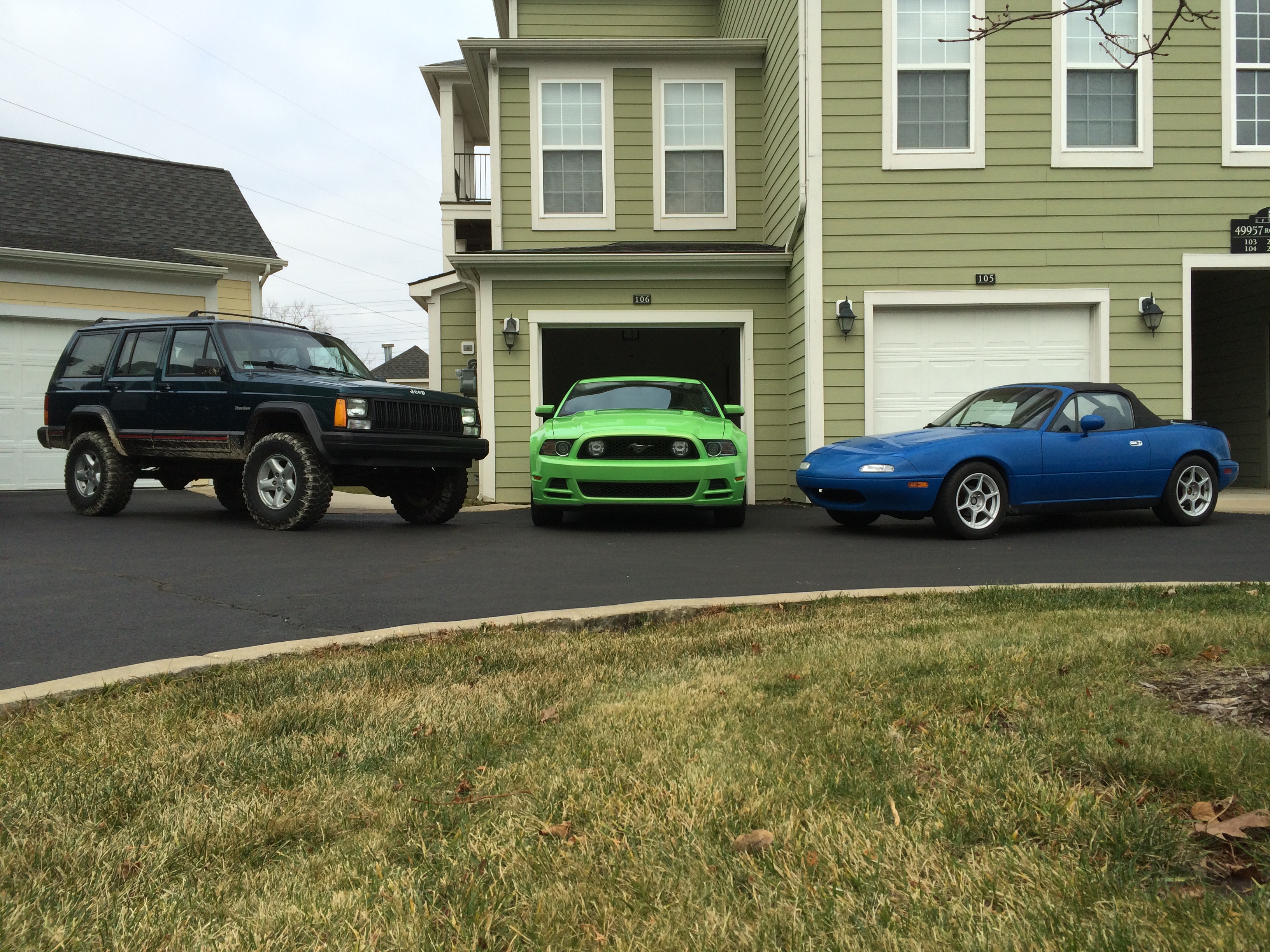 And the Jeep itself (yes, I got it a little muddy on purpose for the photos). 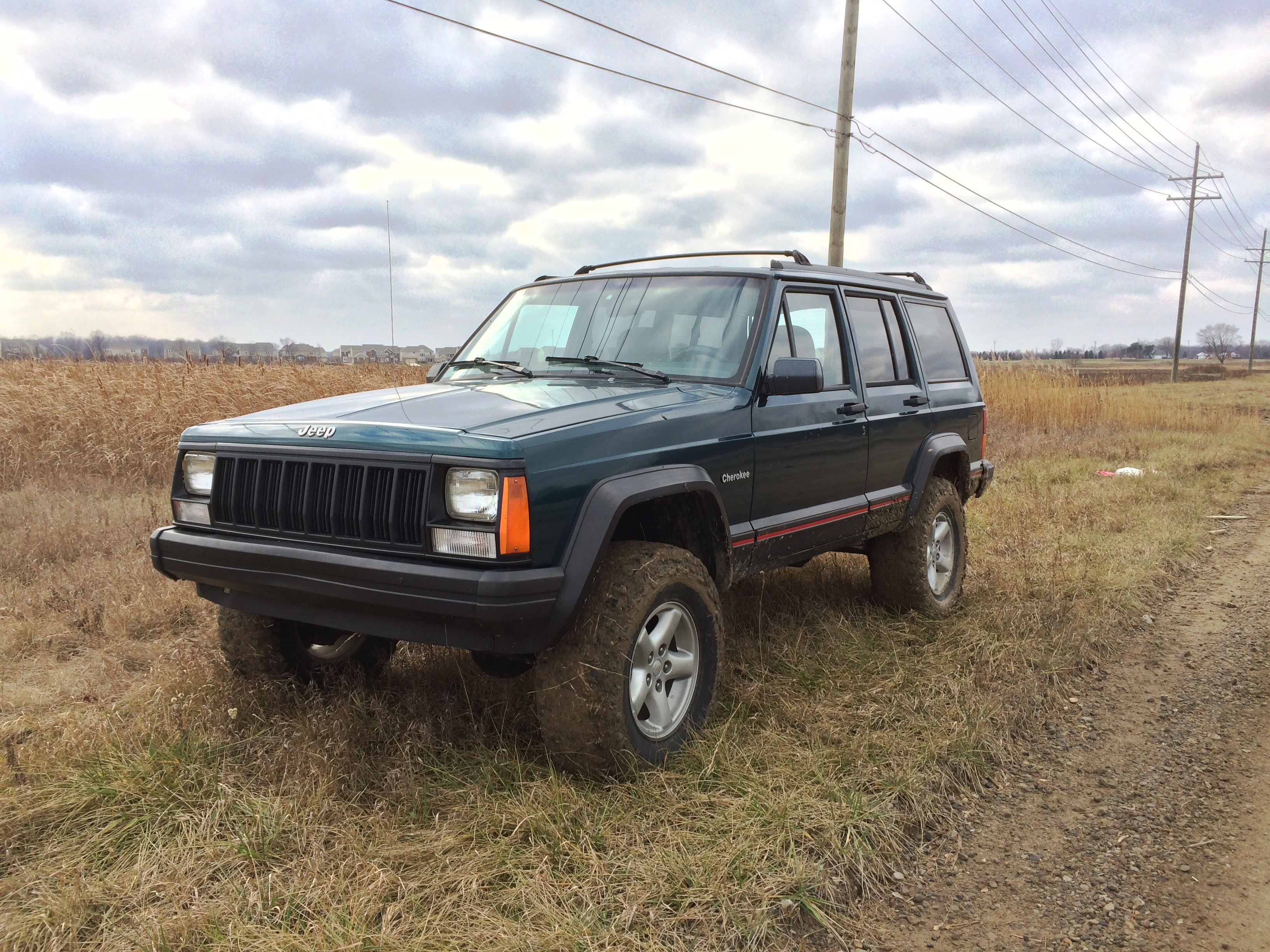 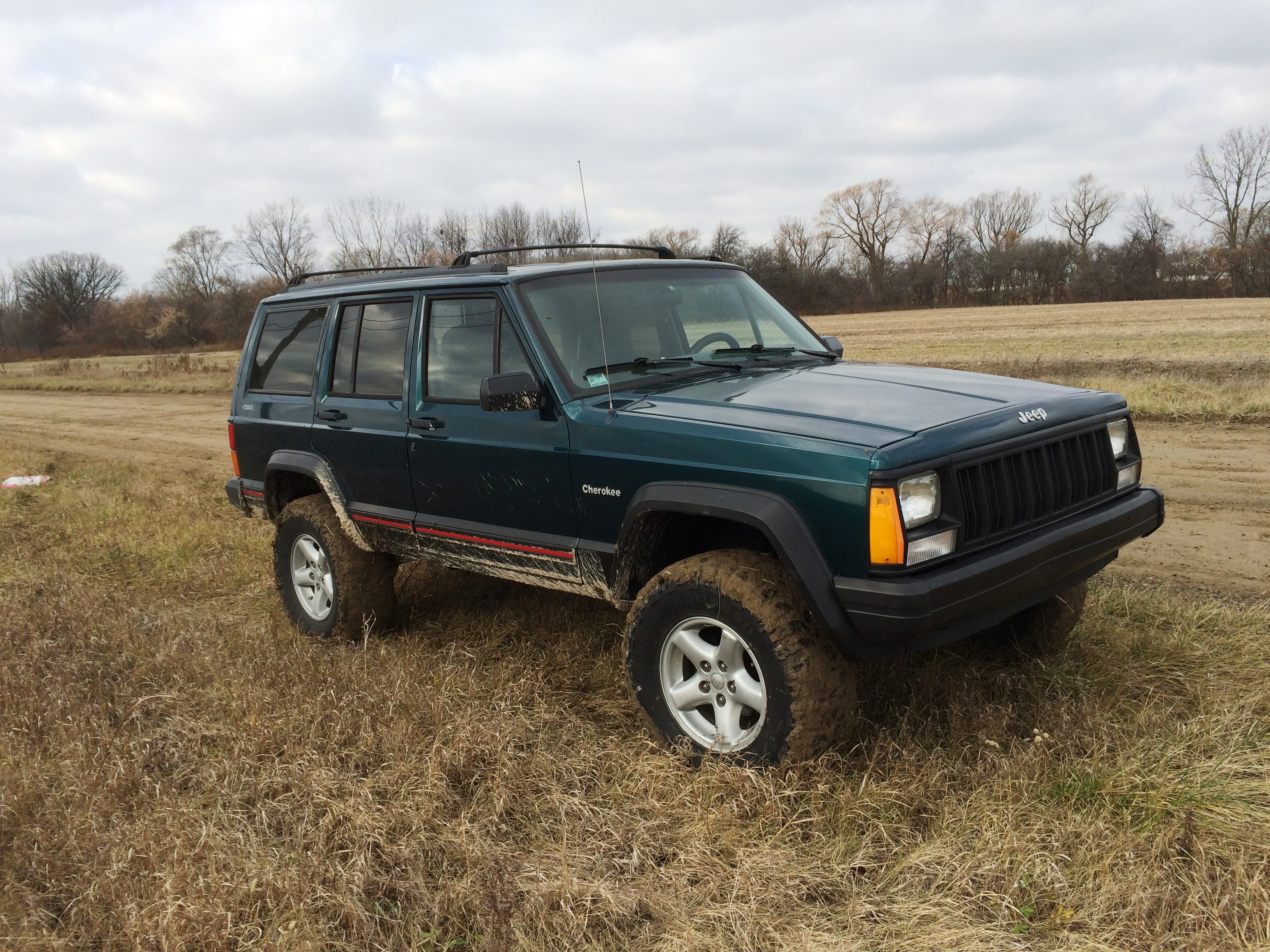 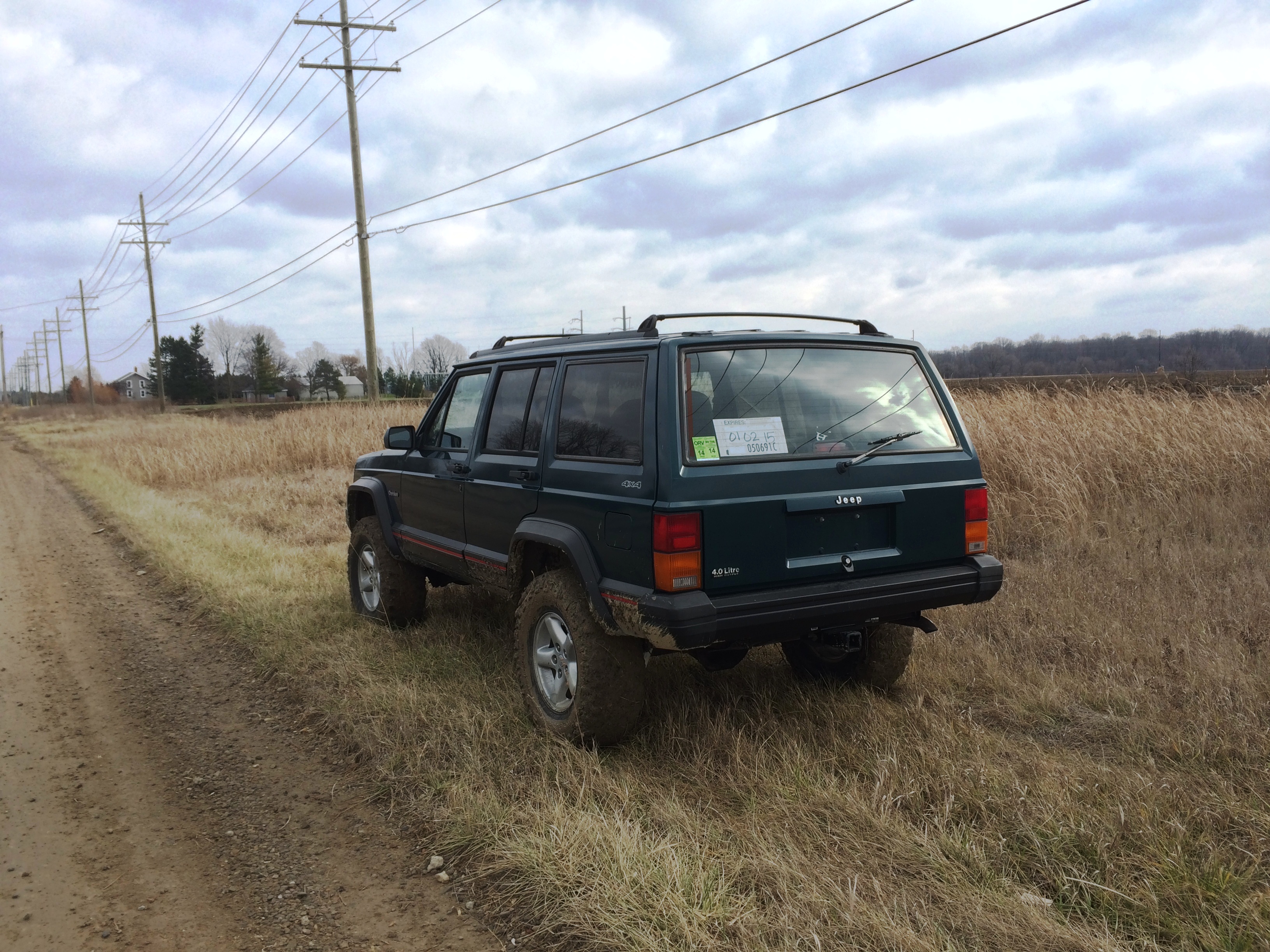 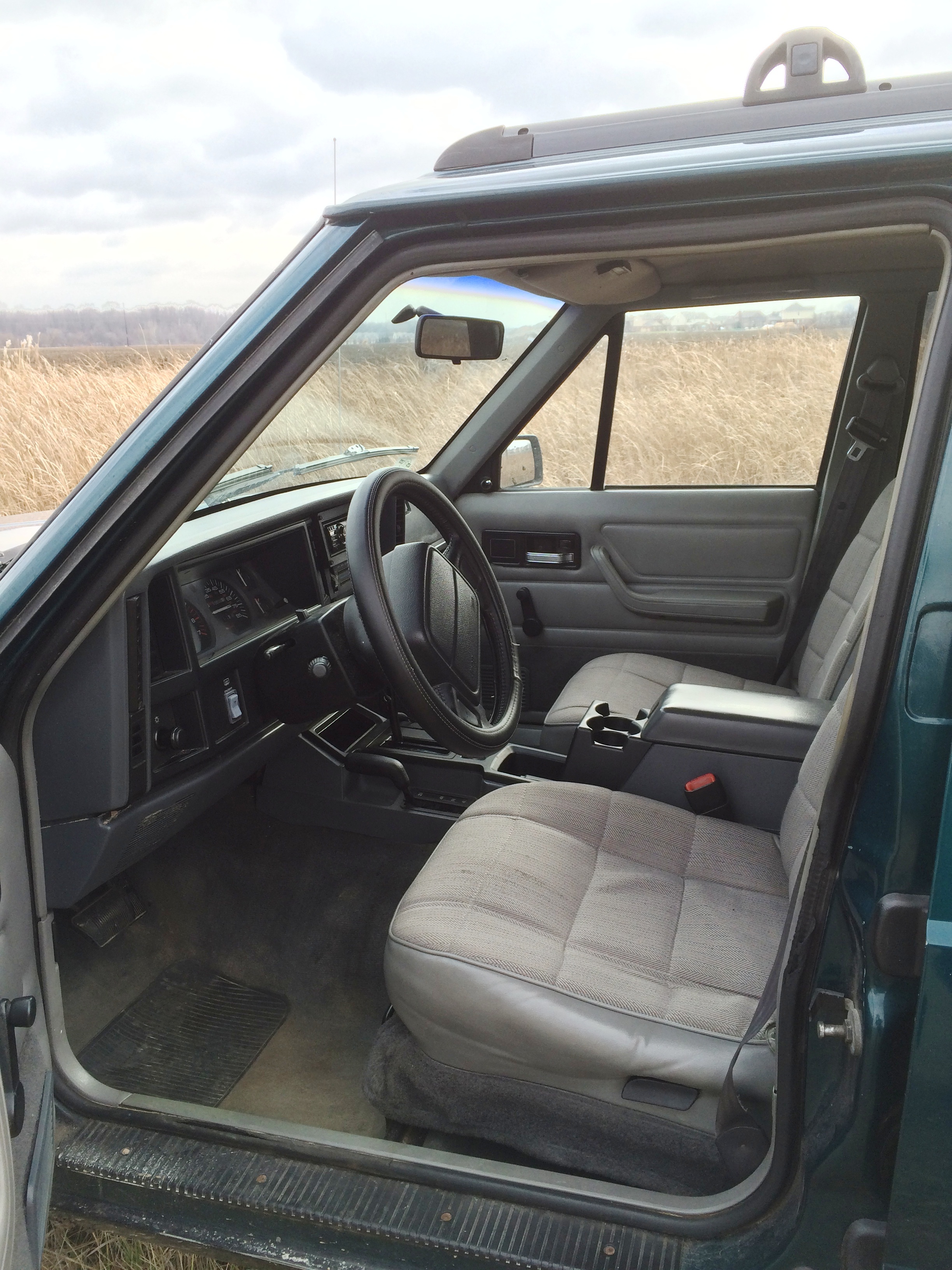 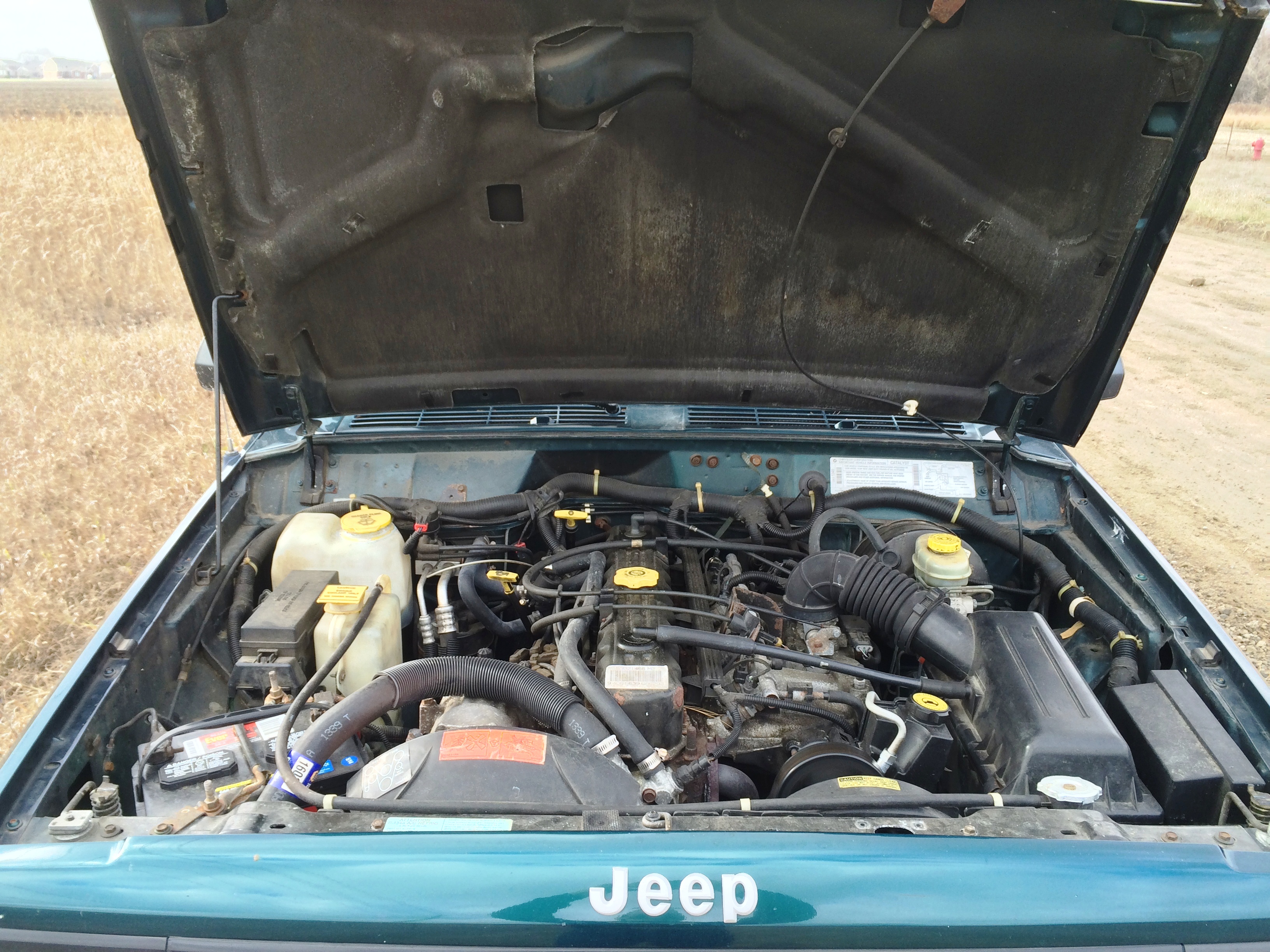 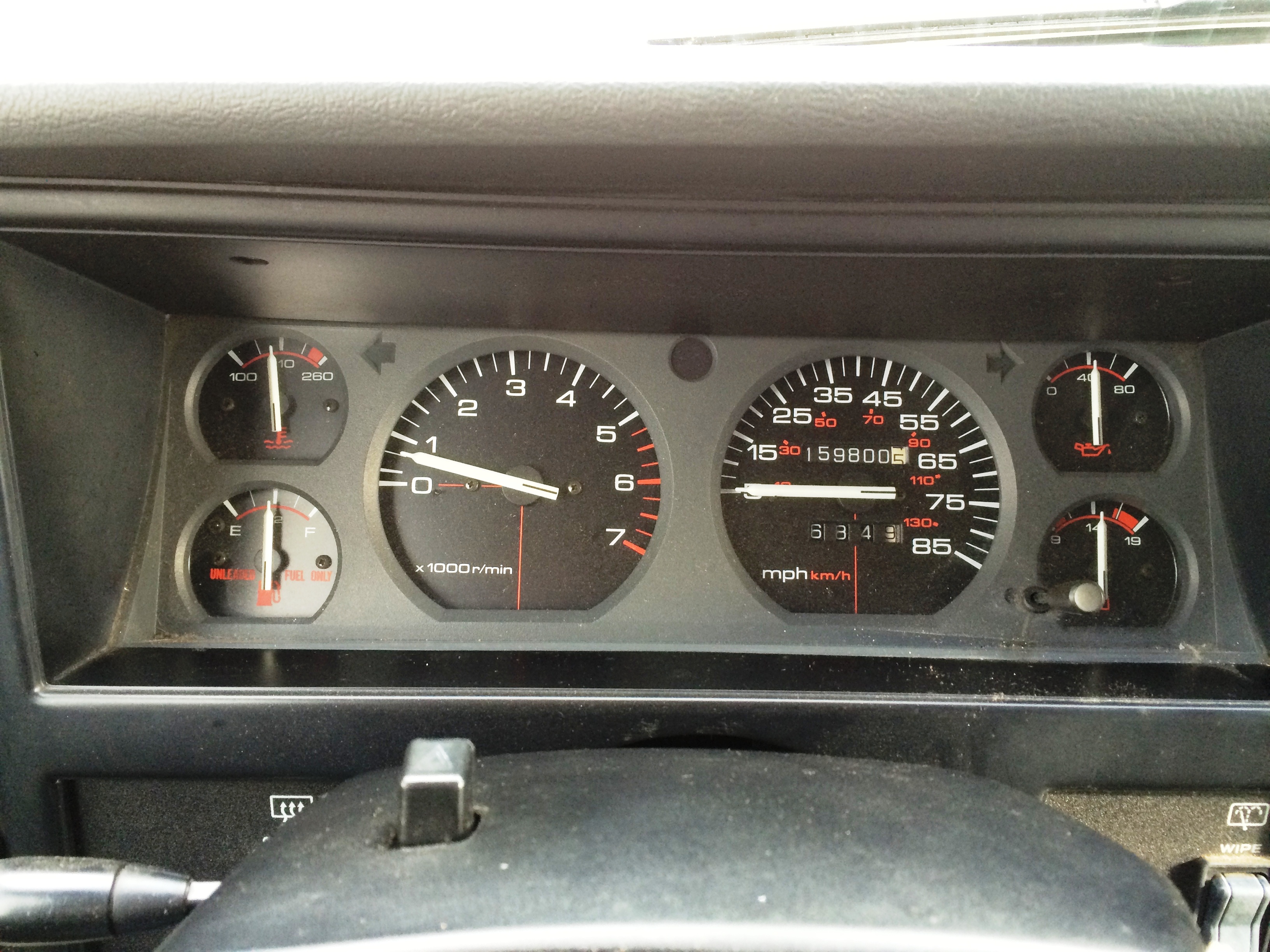 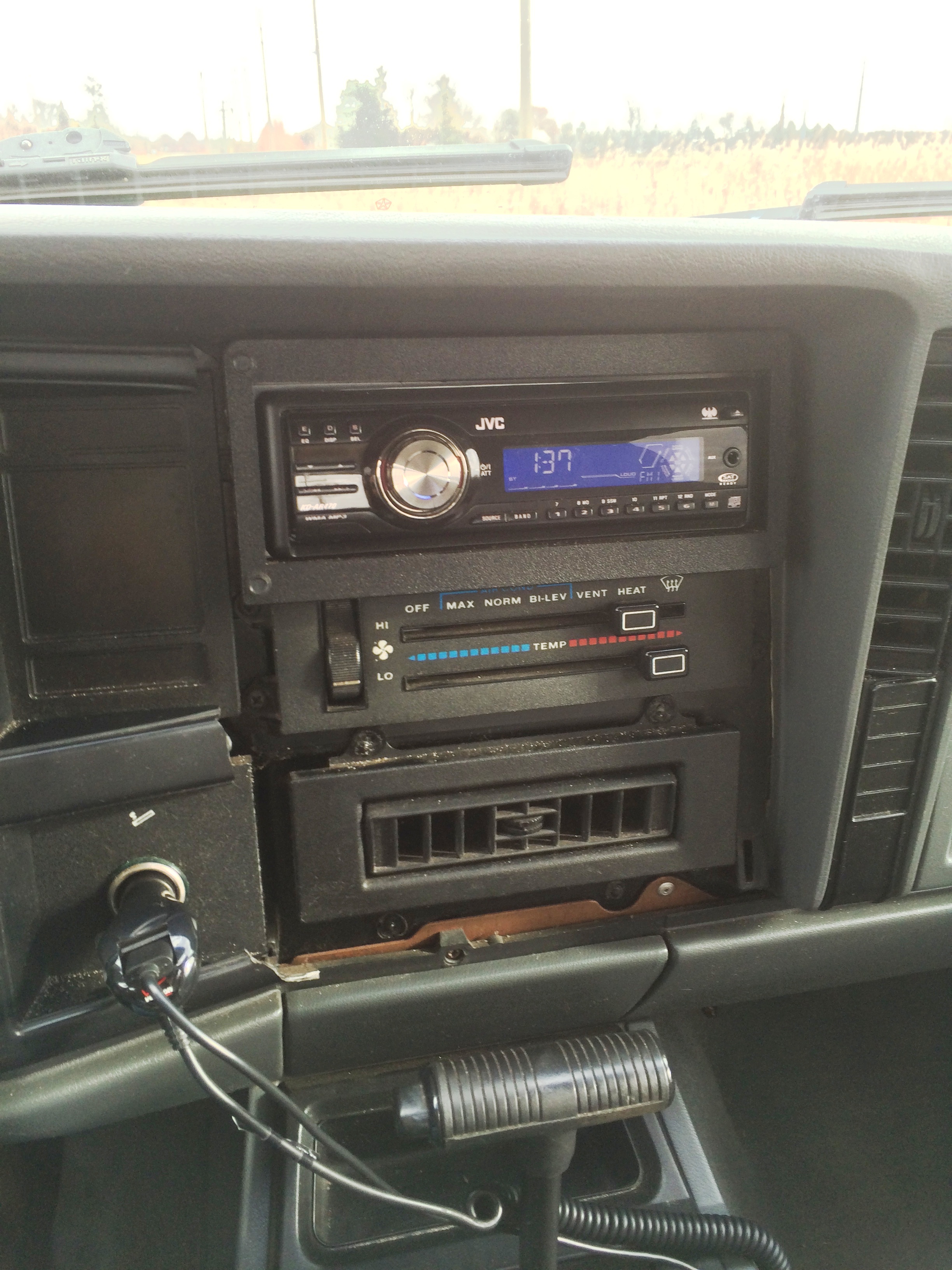 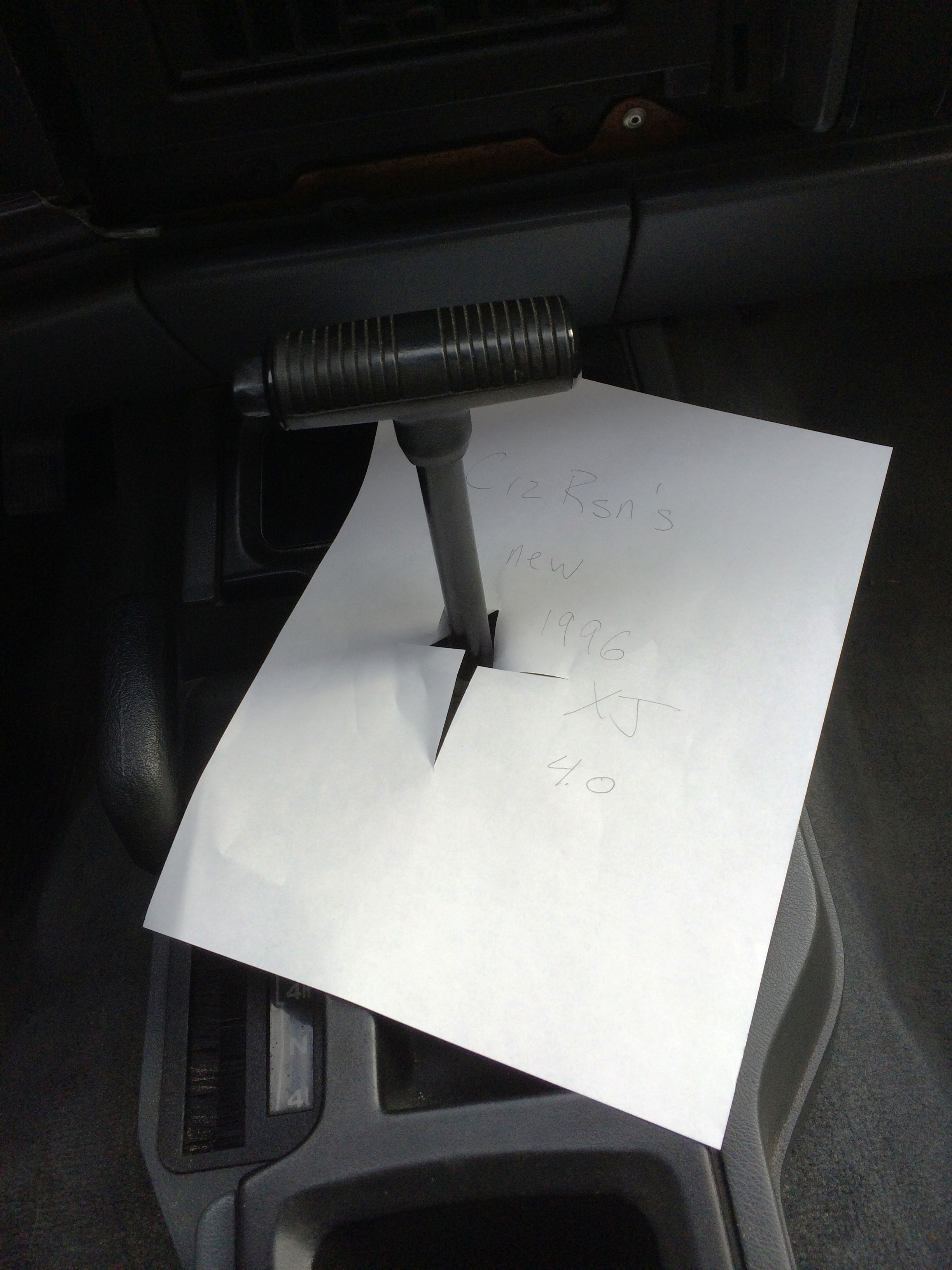 So what are my plans for it? Nothing all too crazy for now, all the things I can find wrong with it are really minor. It seems like the air/heat only come out of the window defrost grille, so figuring out why and getting the dash vents to work again is at the top of my list. The headliner is sagging a bit in the cargo area, so I'm going to tackle that soon. The aftermarket radio install is a bit messy (you can see where they broke the plastic bezel to fit it), so I'm going to try to clean that up and find a replacement dash panel. Other than that, shes more or less perfect. The front bumper is a bit dented, but its all plastic, so should be relatively easy to push that out. The rear wiper sprayer seems to spray the traffic behind me instead of the glass, so will need to correct that. Will need new tires somewhat soon (probably late spring/early summer), but the 31" Mickey Thompson MTZs on there right now have enough tread on them to last me the winter and through my first few offroading attempts in the spring.
Last edited: Dec 6, 2014

Looks like it is in great shape for it's age

It was when they designed that cluster for the 1984 model year. Jeep used to let models run with unchanged styling for much longer than the traditional model refresh cycles.

Thanks everyone! Its been ~300ish miles and I'm really enjoying it. Would take it offroading with a local Jeep group next weekend, but I'll be in Arizona for a business trip.


JipJopJones said:
The rear window washer is your defence against aggressive tailgaters!
Click to expand...

Ooohhh. I didn't think of that. I like this idea, and may not bother to fix it :lol:

I am a fan of this color. I think its a good middle ground between the other 2.

It was when they designed that cluster for the 1984 model year. Jeep used to let models run with unchanged styling for much longer than the traditional model refresh cycles.
Click to expand...

Plus I don't think I'll ever take it up that fast. Especially with the lift. I think 70ish is a good upper limit for it.
Last edited: Dec 8, 2014

Plus I don't think I'll ever take it up that fast. Especially with the lift. I think 70ish is a good upper limit for it.
Click to expand...

Good plan. I once got my CJ7 up to between 85 and 90ish. Quite possibly the scariest thing I've ever done.

Started making a list of things I need to buy and/or keep in the Jeep for my various escapades. I have very limited experience with this so some input from more seasoned offroaders would be welcome.

1. 8ft' safety whip flag (PO included mount).
2. Tow hook for rear hitch receiver (to be pulled out of mud pits).
3. Tow straps
4. Hi-lift jack (need to check if the bottle jack I got from the PO can deal with the lift)
5. Wrench for front sway bar disconnect links (possibly upgrade to quick disconnects in the future)
7. Gloves
8. Dashcam (duh)

I'm thinking those are the bare essentials, but I may be missing something crucial. I'm not including anything major like a steel front bumper or a winch for now.
Last edited: Dec 8, 2014

Excellent Jeep Very similar to the one my parents had for almost 15 years.

To add to your kit:
-First-aid kit
-Shop towels
-Gallon water jug
-Oil/ATF
-Jerry can of gas
-Flashlight
-Fix a flat for when you destroy two tires in one day of wheeling

Der Stig said:
Excellent Jeep Very similar to the one my parents had for almost 15 years.

To add to your kit:
-First-aid kit
-Shop towels
-Gallon water jug
-Oil/ATF
-Jerry can of gas
-Flashlight
-Fix a flat for when you destroy two tires in one day of wheeling
Click to expand...

The PO gave me the OEM set of wheels/tires. I was planning on selling them, but maybe I should just take the set with me whenever I go to the ORV park and drop them in the staging area in case I need more than 1 spare :lol:

You forgot the light bar!

jibduh said:
You forgot the light bar!
Click to expand...

Plate came in the mail today! There wasn't much of a reason to redesign it :lol:

electromage said:
There wasn't much of a reason to redesign it :lol:
Click to expand...

Also, what front bumper is that in your avatar picture?

Not that I'm looking to upgrade yet :lol:

It's a JCR, one of their older designs. I think it's a "Stage 3" with the light hoop option.