A few new experiences to report from my recent trip.

First off, Virgin Atlantic. Oh my! I think this is my new preferred transatlantic carrier. Starting with the Virgin Clubhouse at JFK - this was easily the nicest lounge I've ever been to. Comfortable, quiet, great atmosphere, good food. Then I got into an economy seat on one of Virgin's new A350-1000s and it was very quiet and smooth. The seats were fairly comfortable and the recline was one of the best I can recall offhand from any of my international economy flights. The food was also the best meal I've ever had on a plane, even beating out what was served in KLM's World Business. The only downside was that the IFE was inop the whole flight, but the flight attendants proactively handed out apology letters offering a decent amount of miles as compensation. Once in London, the added perk of being able to shower and have a full breakfast at the Revival's lounge was incredible. I had never seen a lounge for arriving passengers, but this made total sense.
On the return journey, having a deserted Priority security lane was fantastic and the Virgin Clubhouse at LHR was also very nice, though not quite as quiet as the one at JFK. The return flight was on an older A330-300, but it was still very pleasant. The IFE worked this time, but the system was much older with smaller screens, but not nearly as old and broken as the one on the AF A380 I flew on in November.


Now for the 2nd part of this trip - my first experience with a discount European airline. Flew Wizz Air UK out of LTN. Based on everything I read on Wizz Air's site and the internet, I was expecting a disaster of the highest proportions. Lines a mile long, hours in security, delayed flights, insane fees. But no, overall everything was very pleasant. The bag drop line seemed like it was 3 hours long, but I only had a carryon, so didn't need to worry about that. Got through LTN security in about 5 minutes and without issues. The biggest scare came at the gate when they told me my carryon was too big and I'd have to pay. The main reason they said that was because it was a roller suitcase rather than a backpack. Well, it met their size criteria as it was specifically designed to fit under the seat infront of me and was smaller than most people's backpacks. They did make me try to fit it into the size check bin next to the counter and it fit perfectly except for the wheels, so they reluctantly let me though. Took a photo on the plane with it under the seat just in case for the return trip. The plane ended up boarding on time, but we sat there for an hour and a half due to ATC issues, but only ended up arriving 30 mins late, so not too shabby. Unfortunate I bought a souvenir that I totally forgot couldn't go in carryon luggage, so I ended up paying the crazy check luggage fee for the return journey. And once back at Luton I managed to get through passport control in about 10 seconds flat (its nice that US passports can use e-gates now), and 15 minutes later I was walking away from the baggage reclaim belt with my bag.

All in all, my first Euro discount carrier experience exceeded my expectations greatly. Was expecting a disaster of gargantuan proportions, and instead got a very reasonable flight experience.


calvinhobbes said:
Yesterday at DTW though
Click to expand...

Yes, but only for a few more hours. The trips to the US have become one-nighters, which is nice for my wallet, but terrible for the experience. It might be nice to get out of a boring place after just one night, but I’m very happy to have experienced the longer stays in interesting places.

calvinhobbes said:
Yes, but only for a few more hours.
Click to expand...

Got time for lunch? Work has been pretty slow today. Thought I guess depending on where you are, it may not be slow enough.

CrzRsn said:
Got time for lunch? Work has been pretty slow today. Thought I guess depending on where you are, it may not be slow enough.
Click to expand...

Ugh, damn it, I’ve only just seen that. I’m at the airport now, so hopefully next time, we can have lunch!

calvinhobbes said:
Ugh, damn it, I’ve only just seen that. I’m at the airport now, so hopefully next time, we can have lunch!
Click to expand...

Indeed. Next time you're going through DTW, remember there's a little slice of FinalGear in Detroit. I work just 15 mins from DTW. Safe flight.

CrzRsn said:
Indeed. Next time you're going through DTW, remember there's a little slice of FinalGear in Detroit. I work just 15 mins from DTW. Safe flight.
Click to expand...

Thanks! I thought you were still travelling, so I didn’t contact you. D’oh! 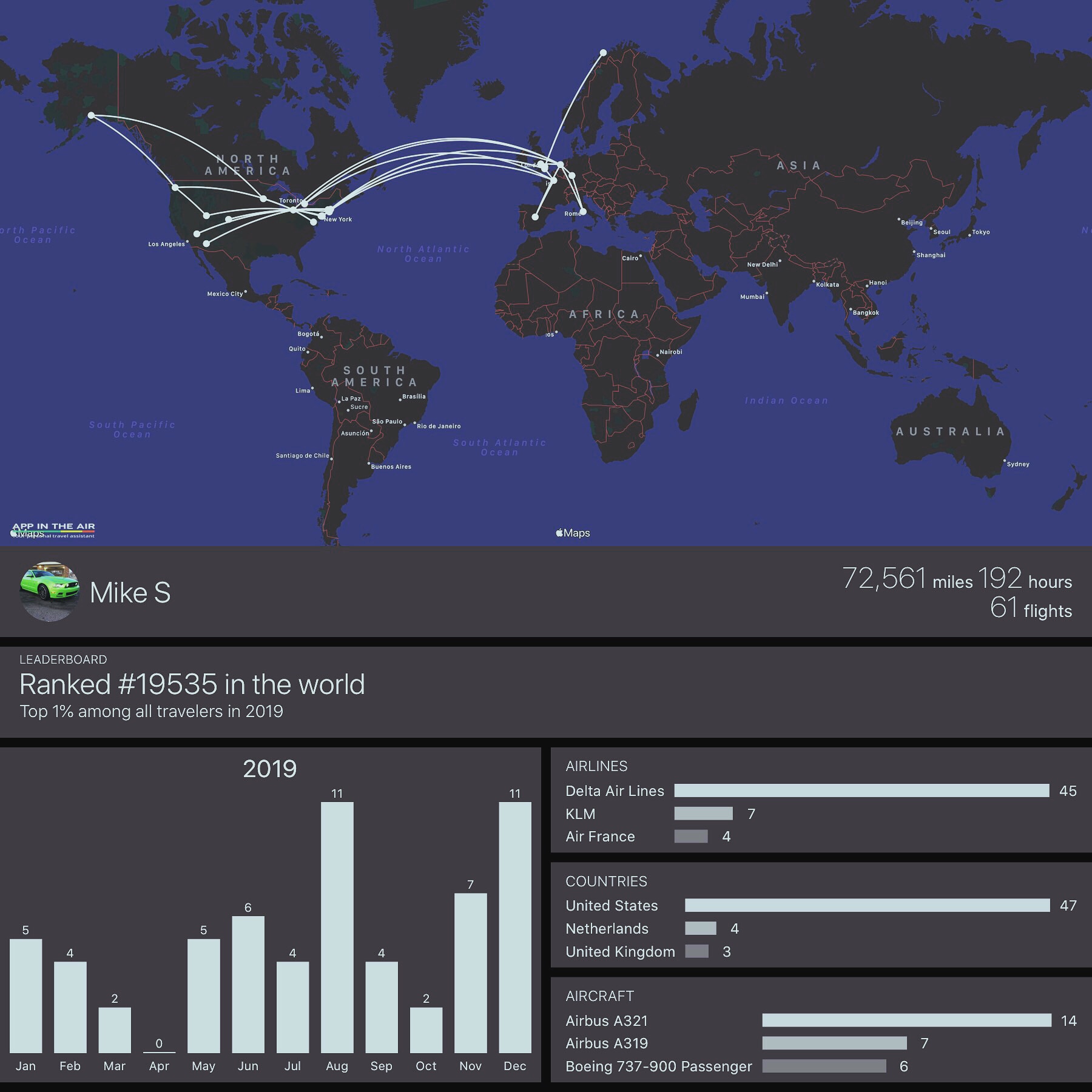 Not a bad end to the year. Was a slacker in April evidently.

Somebody filmed this in a Dash 8-300 taking-off from Montreal recently... Oupsy.