Vette Boss said:
What I really think, is that Islam needs major reformation. More people need to come out against the violence done in the name of the religion.
Click to expand...

Most of us know Muslims because we have that one guy at work who is from Iran and he seems like a chill dude but for some reason likes Stella Artois - he's a Muslim and he's about as "normal" as you and I. That guy is about as Muslim as Bernie Sanders is Jewish - they are "on paper" religious. This is the case in the US, Europe, and Australia.

But then you get to the rest of the world, specifically North Africa and the Middle East (with few exceptions) and suddenly you encounter Sharia law - gays getting stoned, women treated like dogs, cruel punishment for petty crime, and so on. Even if those parts of the world did not produce a disproportionate number of violent extremists and terrorists, it would still be a pretty fucked up set of countries - backwards is probably the best word to describe it. It's important to understand that Sharia law cannot coexist with western democracy as we know it on a basic fundamental level; for example, "we" treat women as equals, whereas majority-Muslim countries do this: 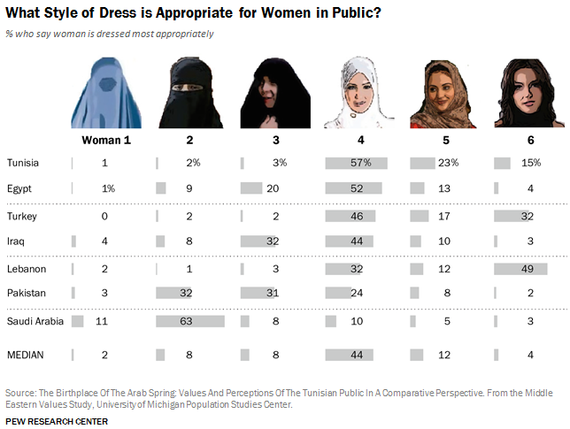 That being said, obviously that Iranian coworker with the weird taste in beer is not an extremist, terrorist, or Sharia supporter (most likely). But I'd be lying if I said that the sight of woman 1 or woman 2 from the above graphic on a Boston street does not make me uneasy. That style of dress indicates that I'm looking at someone who closely follows Sharia and because of the above reasons, that's pretty fucked up. They also probably want me dead because I am a Jew.

The point is that majority-Muslim countries are pretty screwed up places, by and large, because they are pretty darn extreme in how religious they are. I agree with you, Vette Boss, that they need major reformation but I really, really stress the word MAJOR.

I highly doubt any form of Sharia would ever become law over here, so it isn't likely to be a threat to us. Most of the Muslims coming to America are trying to escape the violence of radical Islam and just need time to adapt. Those who choose not to adapt, will find out just how American law is against their worldview.

Vette Boss said:
Just to be clear, I don't have fear that Muslims have some sort of master plan to take over the Western world. I don't hate people, no matter how toxic their beliefs may be. What I really think, is that Islam needs major reformation. More people need to come out against the violence done in the name of the religion.
Click to expand...

Be careful, Ben Affleck will call you a racist for remarks like that.

argatoga said:
Be careful, Ben Affleck will call you a racist for remarks like that.
Click to expand...

I don't respect his views anyway, he's part of the regressive left I bemoan.

What is religion anyway? Just a form of worshipping a God? Nope.

I think religion is a much broader thing. To me everything is religion, where people heavily believe in stuff but don't know or don't want to know if their belief is true. People believe in things they can identify with. So what falls under the general term "religion" under this premise?

Being a fanboy/fangirl of someone or something? Check.

All kind of esoteric stuff? Check.

Being a fan of a football/soccer team? Check.

Being fan of a certain rock star/group? Check.

Coca-Cola is better than Pepsi? Check.

Everyone of us has something they believe in without being able or willing to check if it really lives up to the facts or not. And if one of the big religions like Christianty or Islam isn't your thing, you look for something else to believe in. No human can live without believing in something. Belief is part of our daily lives and saying "I hate religion" basically means you hate life itself.

I don't believe in a God. I don't worship or pray to anyone or anything. But I believe in certain things and I recognize that we humans are unable to understand everything, so we need a certain amount of belief in order to remain mentally sane. And if we don't believe in a God and are appalled by the big religious movements, we look for a substitute.

In fact, the problem is not -believing- in something, but becoming so rigid about it that we can't see its flaws anymore and we refuse to aknowledge its uncertainties, to the point where we become hostile or violent towards those who think differently.

And as Mac pointed out, that can happen in all aspects of life, so much so that we all have at least one aspect of our lives, small as it may be, where we simply don't even want to hear anything differing with what we believe in.

But, the more important, sane and healthy behaviour in these cases is to be open, which doesn't mean to enthusiastically accept all BS you can hear around, nor that every opinion equals any other, which it doesn't. It means to remain open to -listening- to other ideas and to integrate what good they bring, knowing at the same time that if you keep believing or doing something blatantly wrong, or just undefined, you should know that and stop when this brings or may bring any kind of harm to anyone else.
Last edited: Mar 17, 2016

Yup. And closing the circle to the topic of this thread: Those Trump followers also simply believe without knowing. Trump is their new religious figure and they're getting fanatic about him. They don't listen to reason anymore.

Anyone with open eyes and ears can see that Trump is a liar, a Wizard of Oz who makes a very big impression but is in fact nothing but sound and smoke. He won't be able to improve anyone's life -- on the contrary, if you ask me -- yet many, many American simply believe in him because he's an outsider and they are disappointed by the establishment.

Boy, are they gonna be surprised when the mask is going to be pulled off his face. In a twisted way I actually want him to win, just so people can see the fraud they have fallen victim to.
Last edited: Mar 17, 2016

MacGuffin said:
In a twisted way I actually want him to win, just so people can see the fraud they have fallen victim to.
Click to expand...

Picture this: Trump, opening the "football" and pressing the button...because some other world leader ticked him off and he realized he can't retort with "you're fired."

The way to teach US voters a lesson is not to drastically increase the chance that they'll all be nuked.

Yeah, this. We've got at least a dozen states run fully by Republicans, from the House to the Governor's mansion. States getting run into the fucking ground. And yet election after election, enough folks turn out to keep them in power. Could part of that be attributed to the pathetic lack of a real 50 state campaign by the Democratic Party? Sure. But mostly people are just fucking stupid. Trump could win, go to war with who-the-hell-ever, screw our country all up, and these idiots wouldn't learn a goddamned thing.

No, that's actually incorrect. You can't forget their motto, "Conservatism can't fail, only be failed." So if Il Douche failed, conservatives would only say he just didn't try hard enough. That's exactly how they feel about Bush after all.
You must log in or register to reply here.
Share:
Facebook Twitter Reddit WhatsApp Email Link
Top