Since I picked the Freelander gearbox up, the Mazda has been living outside. This wasn't such an issue as I took it for a holiday shortly after. 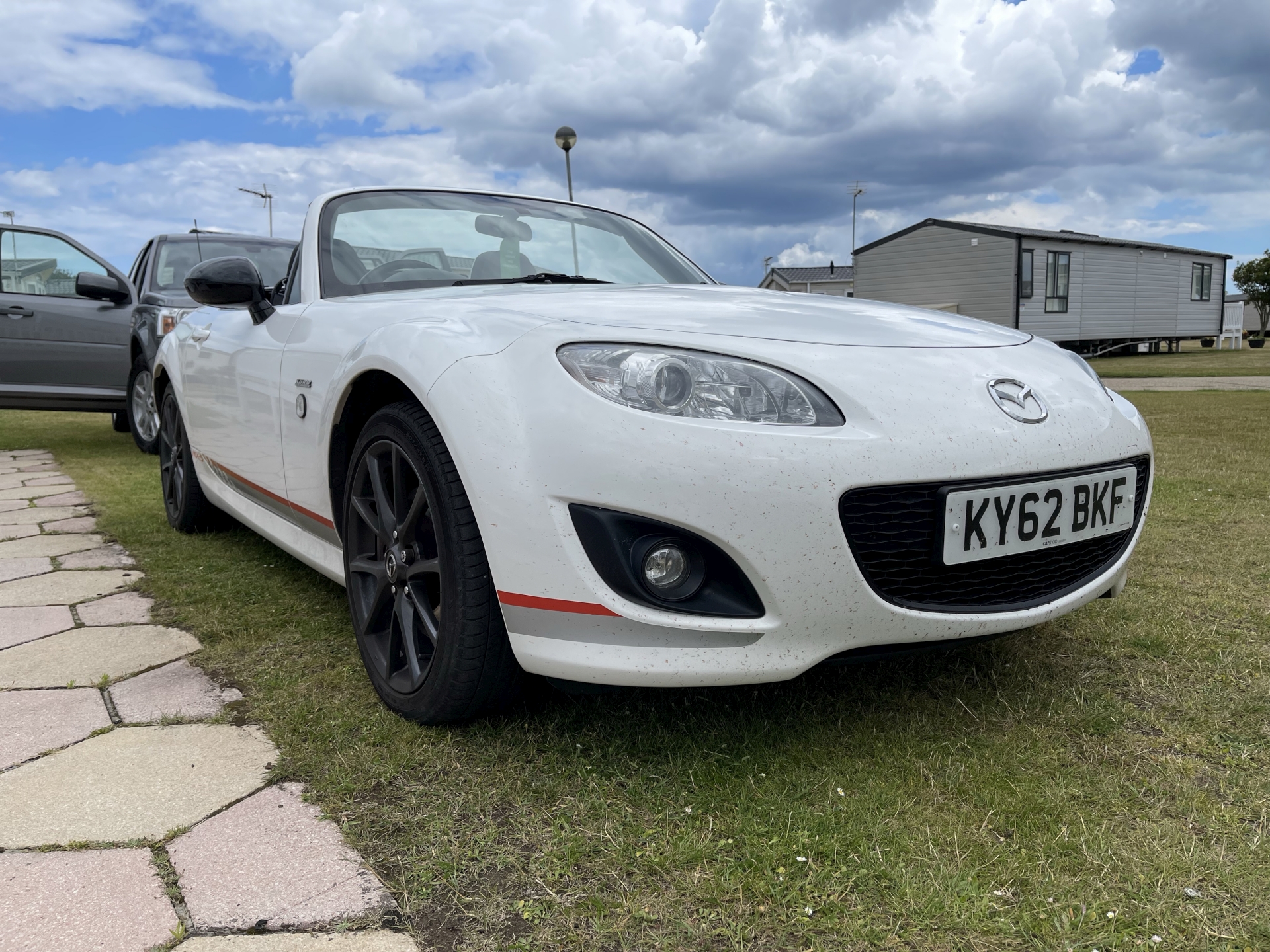 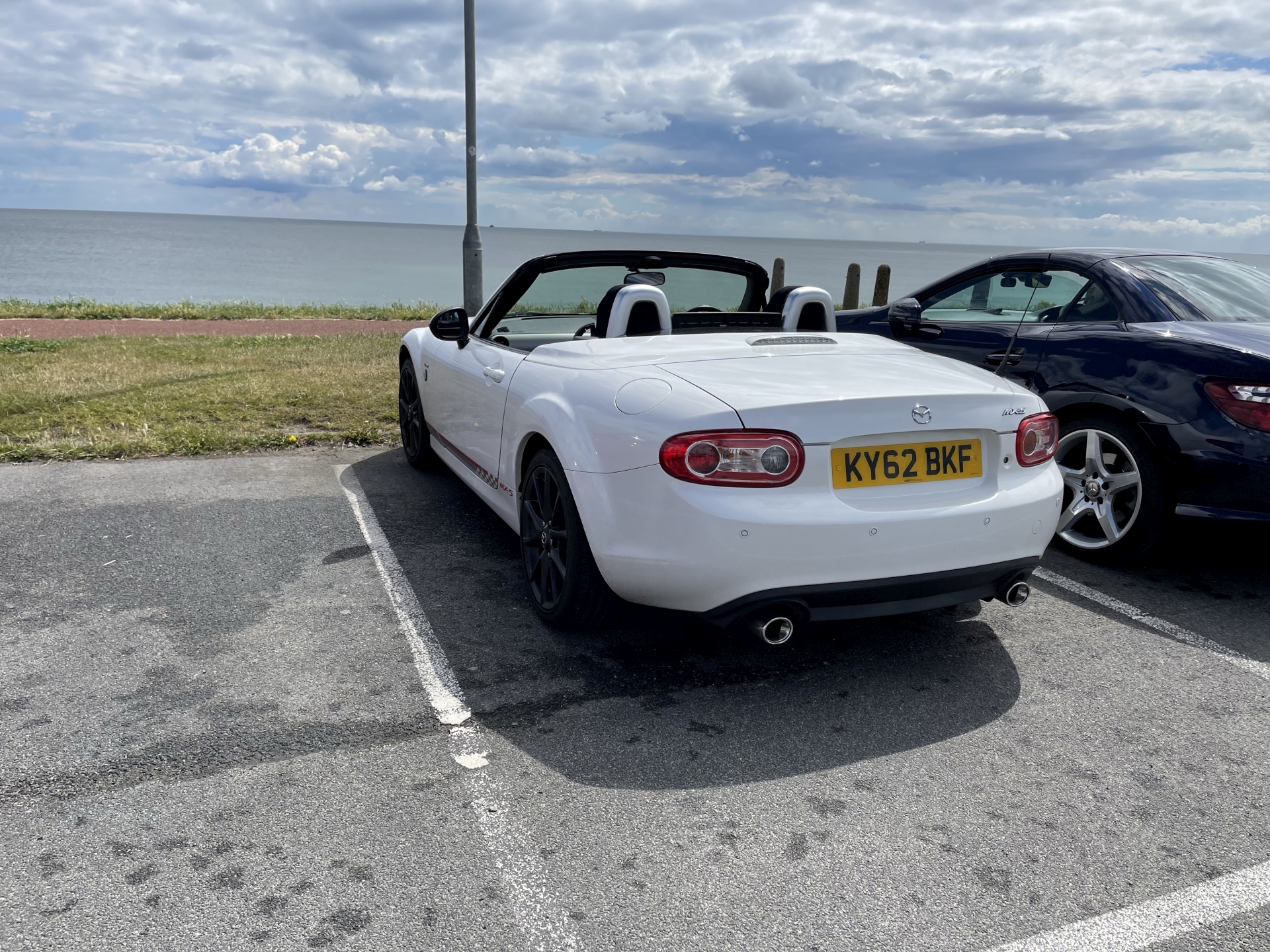 I fitted the new Viofo dashcam, got a Jass Performance air scoop that initially damaged the car and I got a new stubby antenna. This antenna fell out of a UPS van and a nearby resident called me up using the number on the box so I could get it. I let the seller know I had it, no idea if they claimed from UPS and I don't care. Still picks up local stations, I knew it would pick up the FM transmitter I have inside without any antenna at all so I might just get a blanking plug. 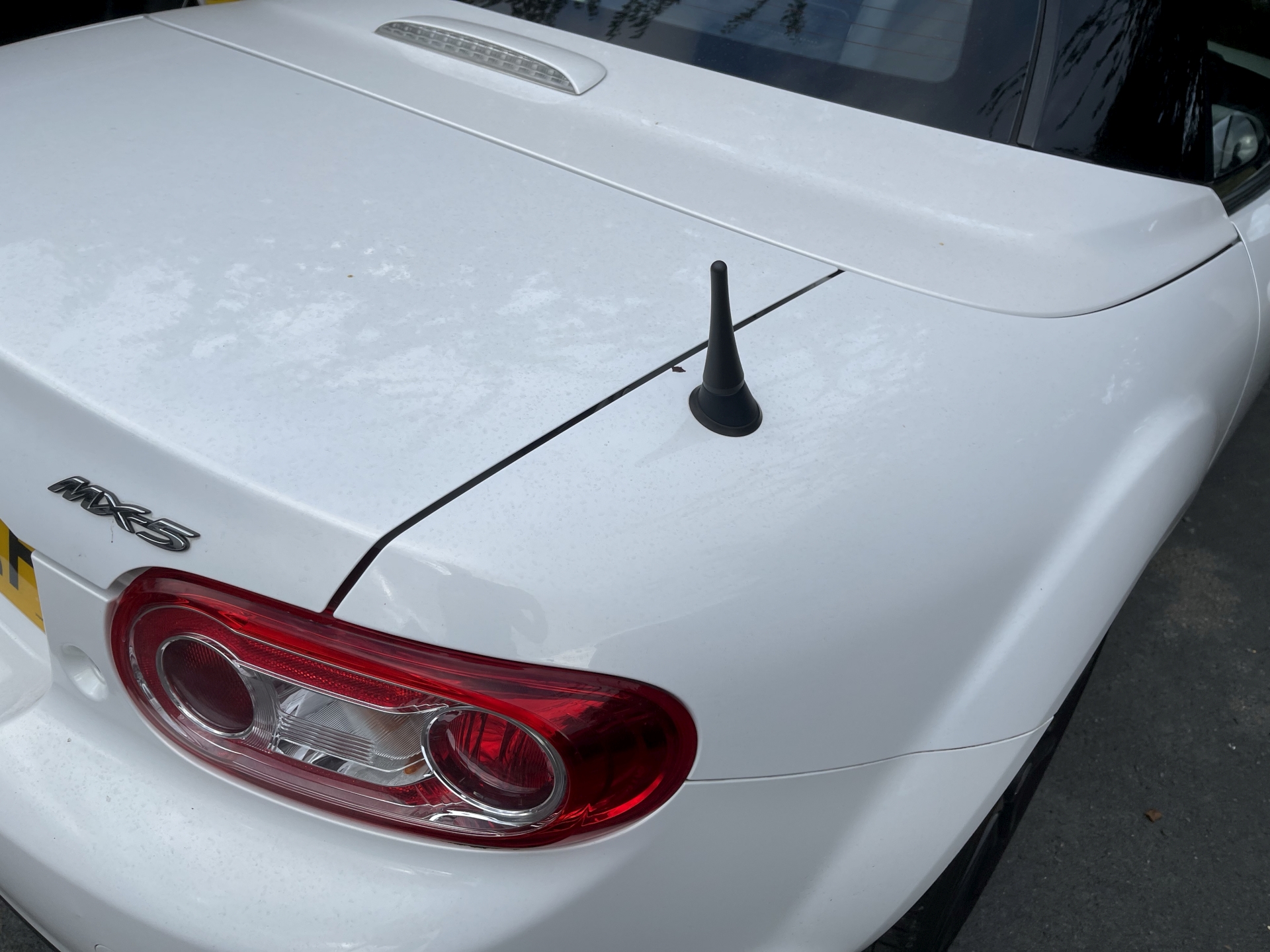 Back in its home after tidying all the Freelander-related stuff up. The Freelander gearbox is right at the end, you can't even see it. Needs a good wash but I did remember to polish the exhaust tips as they were a bit grubby again. If done regularly they can be kept clean with just a rag. 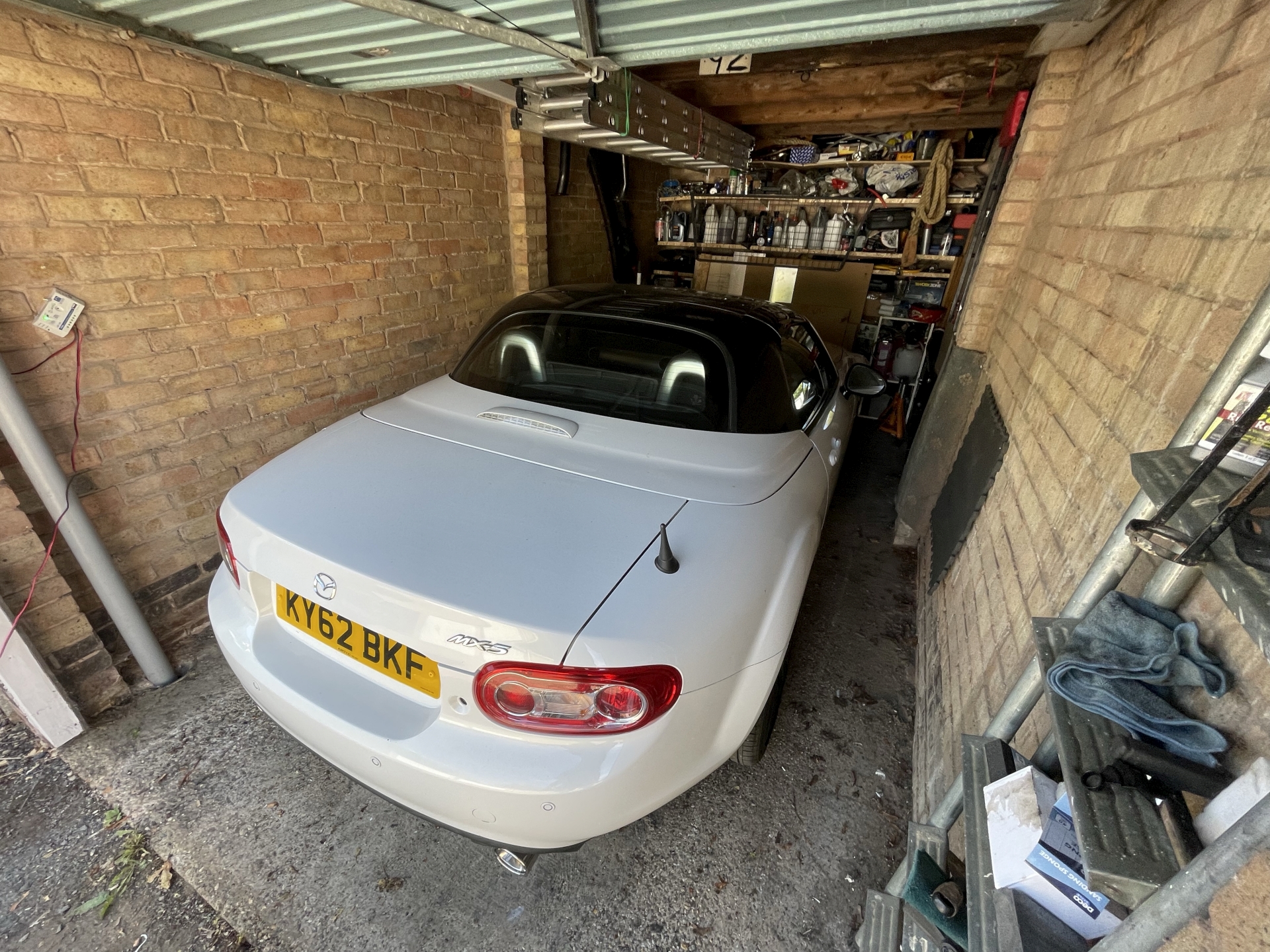 It's still tricky to get out with the windows and roof up, I would really like to add roof or at least window controls in the boot so I can lower the windows before getting in or raise them after I get out. Probably going to talk to some electricians.

Do the windows not drop if you hold the unlock button? I can't remember if that's an option on the Miata or if I'm thinking about my two Minis...
"Well, that's fine. You waste your money on a Mustang or a Ferrari. The fact is that if you want a sports car, the MX-5 is perfect. Nothing on the road will give you better value. Nothing will give you so much fun. The only reason I'm giving it five stars is because I can't give it 14."
--Jeremy Clarkson on the NC MX-5

WDWBen said:
Do the windows not drop if you hold the unlock button? I can't remember if that's an option on the Miata or if I'm thinking about my two Minis...
Click to expand...

It was available with the advanced key apparently and that was a US-only option. Pretty annoying and I had wondered if I could import the module but, having watched videos on how the advanced key works, I think it might actually be more hassle than it's worth.

Duplicating the window switches elsewhere is easy, having the ignition on so they work when the switches are pressed is less easy.

That explains it; I had the advanced key for my car. I always wished it would also drop the top if I left it unlatched, but Mazda said "no."
"Well, that's fine. You waste your money on a Mustang or a Ferrari. The fact is that if you want a sports car, the MX-5 is perfect. Nothing on the road will give you better value. Nothing will give you so much fun. The only reason I'm giving it five stars is because I can't give it 14."
--Jeremy Clarkson on the NC MX-5

WDWBen said:
That explains it; I had the advanced key for my car. I always wished it would also drop the top if I left it unlatched, but Mazda said "no."
Click to expand...

I thought you could do that with the SmartTOP with the advanced key but I clearly made that up in my head.

If I could turn the ignition on remotely then operating the roof and windows is easy, but so is stealing the car!

TL: DR - Video of roadtrip is a the bottom of the post!

Finally writing up my adventure from last weekend. I had planned a roadtrip but a combination of Death Valley temperatures and the inability to get this organised with one of two friends who wanted to come meant that it got put off until the last public holiday of the summer and the last day the schools are closed in this area. Monday 29th August.

This was the route I had planned out, using the motorway it would only take a few hours but according to Google it was going to take 8 hours. I haven't yet worked out what average speed Google used but I did the entire trip in around 7 hours, including a stop for lunch.

In the end neither friend could make it and I found this out on the Saturday before going on the Monday. I had been through the routes on Streetview and written a navigation sheet for my navigator to read that was to aid the OsmAnd maps, I haven't had any success with turn by turn nav on custom routes and sometimes the red line on the map just isn't enough. Without someone to read the maps I was kind of screwed, so I started looking around for alternatives. I knew I had a a little OLED display around somewhere, I had bought it to go with an Arduino and just play around, turned out to be a decent solution.

Much swearing later and lots of different types of code tried, I had all of the lines of instructions stored in the Arduino flash memory, a scrolling display to make up for the small screen and buttons to go to back, forward and to repeat the current instruction.


I then set about making it car friendly, the screen and Arduino went into an old audio cassette case that turned out to be just about as perfect as I had imagined. 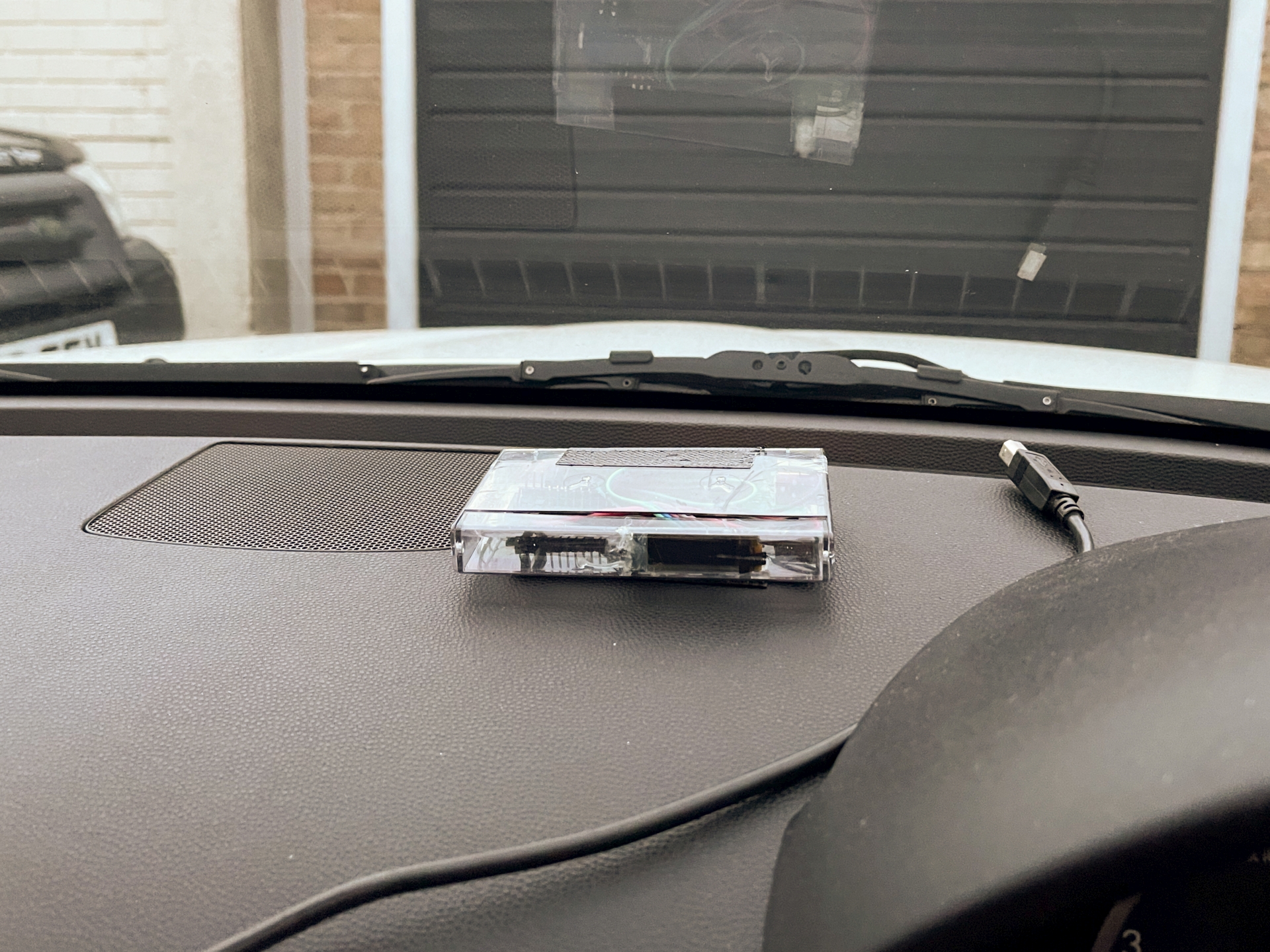 I have lots of USB breakout boards so abused the USB standard to give me an easy way to hook up the three buttons with common ground - a USB A to B cable. The button box was made out of the plastic cover from the old relay I removed from the bobtail engine bay, it actually worked out OK. Easy to reach and identify the buttons without looking. 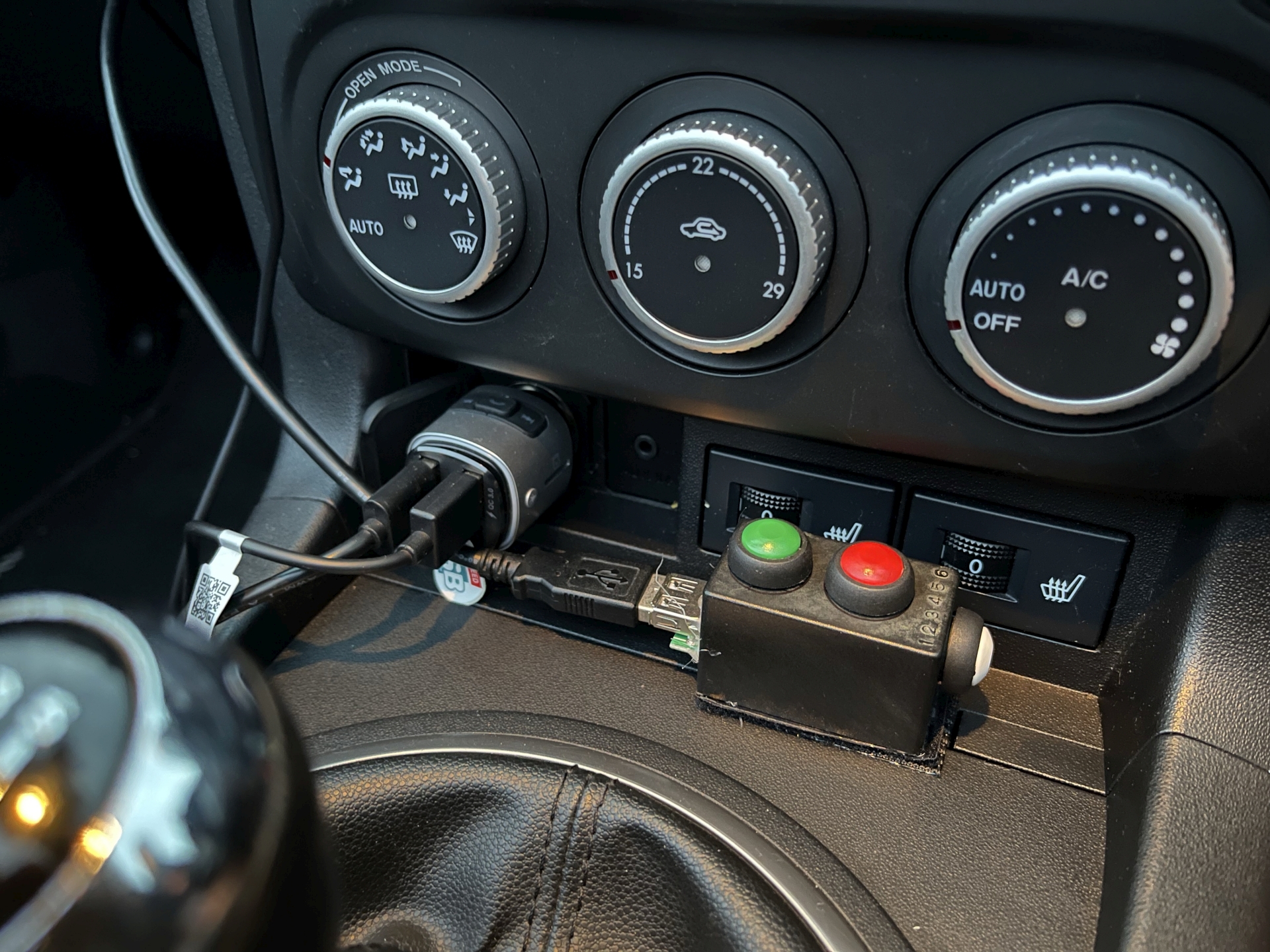 Turns out I missed two instructions, one didn't matter as I knew which way to turn but the other led me to do a little loop around. I will add those to the list to ensure they're present on any future runs. Navigation aside, going through the routes on Streetview was very helpful as I had a good idea of what every road was like and there were no real surprises. Mainly I knew which roads were narrow or rough, not that either caused an issue for the MX-5 which ate up the bumps with ease and was good fun on the twisty sections. I didn't realise until I got back that I didn't get a numb arse at all despite being in the saddle for hours at a time.

Inspired by @Eye-Q 's hyperlapse video a few weeks ago, here's a timelapse of the trip. It starts at my first break stop outside Willington as I stopped the recording to check the view of the rear camera and forgot to press record again. About an hour and a half is missed but I would've cut that shorter and I can say from memory that nothing of interest was missed.

The important part is that I went through the (very busy on this day) village of Hope and then on to Edale, two villages @Misrabelle knows well from our little detour while in Adrian's 8-Series on the 2016 roadtrip. I didn't stop in the Edale car park as it was very busy and I just wanted to get on, plus the drivers of the weaving Juke went in there and I'm not sure I would've been able to keep my mouth shut.


When I got back from the ~260 mile trip I had somehow increased the average MPG of the car even further, I saw it start to increase quite quickly so made it a bit of a game. I aimed to get 33.3MPG and got it! Still no idea what they had done to the car to bring the MPG down so low and I wasn't hypermiling. 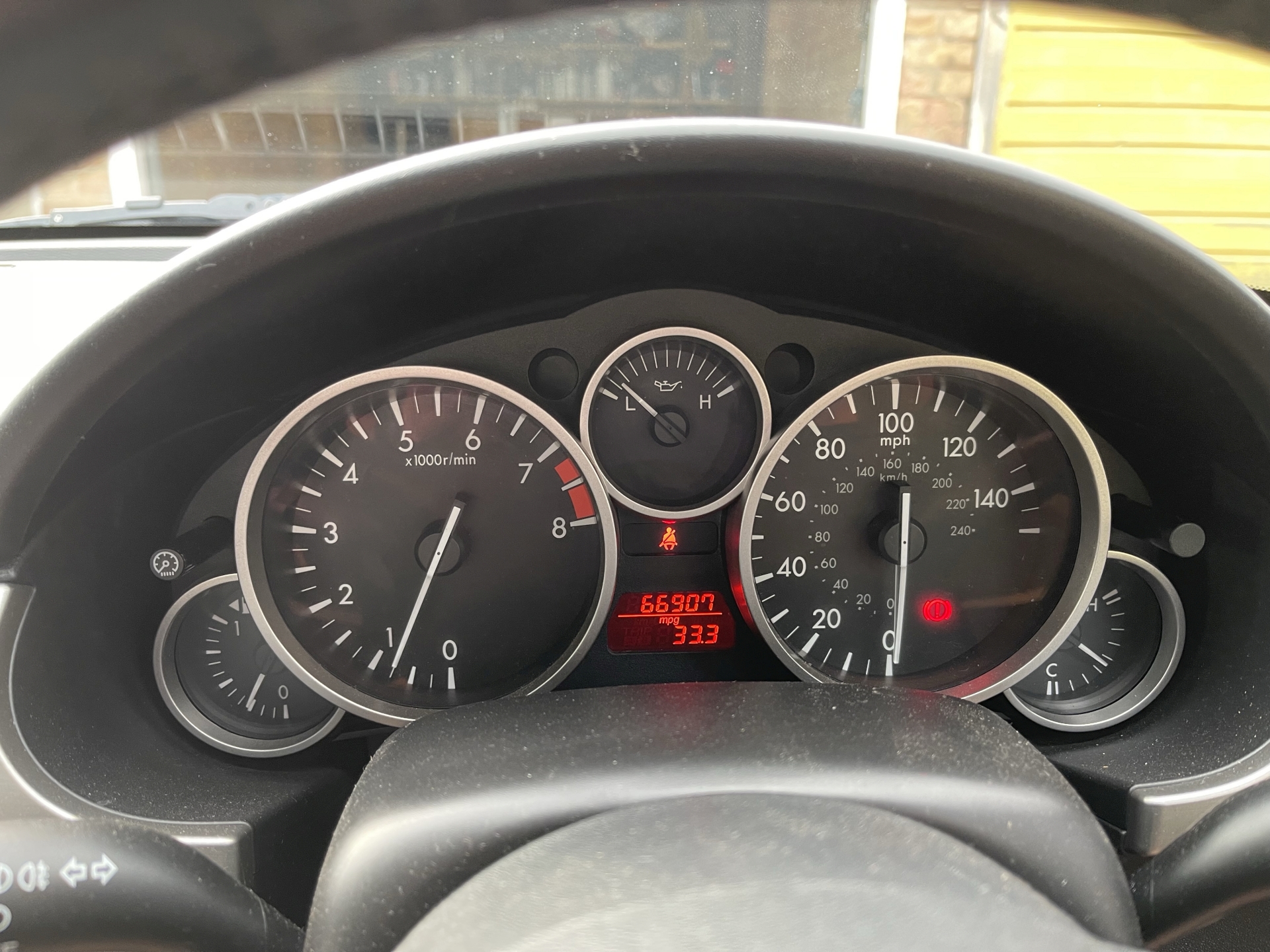 Great trip, would do again. I wouldn't change any of the roads I drove.