Neat one-way fitting on the crank bolt. I assume that's the connection for the hand-crank so it doesn't rip your arm off when the engine catches?

^ I believe so. Haven't dared try the starting handle yet.

Did a 150 mile rally in Scotland yesterday, never missed a beat. Absolutely amazing drive, it just chugs along in third gear all day without complaining. I'm so impressed and pleased with my purchase now, looking forward to a three day rally in Oxfordshire next weekend.

Only hiccup was while putting the hood up the day before, I discovered the central hoop had failed and was completely dry rotted. Unfortunately this places the hood out of action, so I did get a bit wet yesterday... Going to try steaming some ash to bend a new hoop in the future. That's a skill I didn't expect to learn!

Oh, and also one of the wheels split a few weeks ago. Not the wooden element, the actual metal outer rim. Was quite thin and rotten where it went - I suspect it had been standing in the wet for a few years and developed pretty bad rust. Have had it welded up since then, and now seems to be fine.

Wheel before and after: 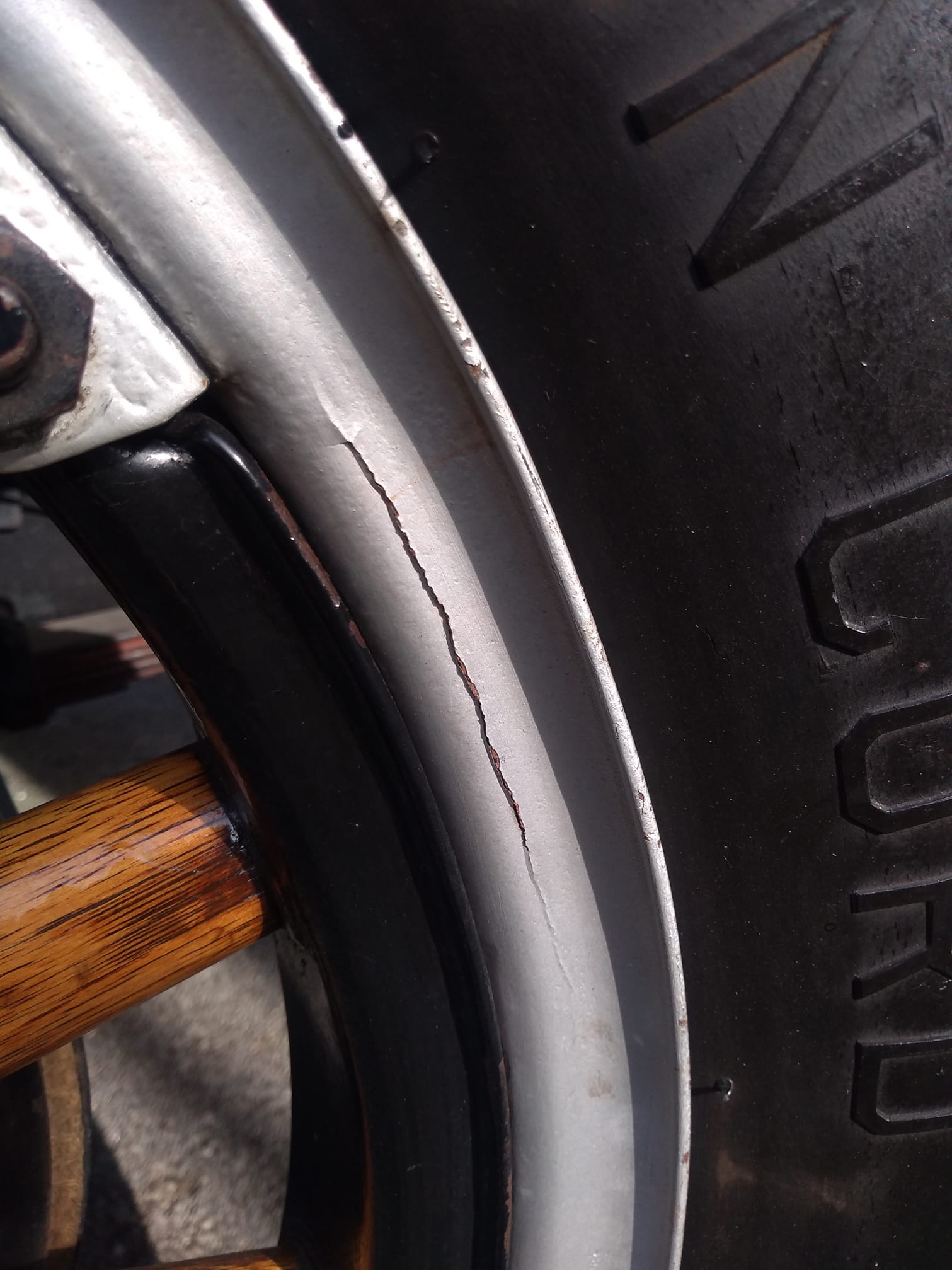 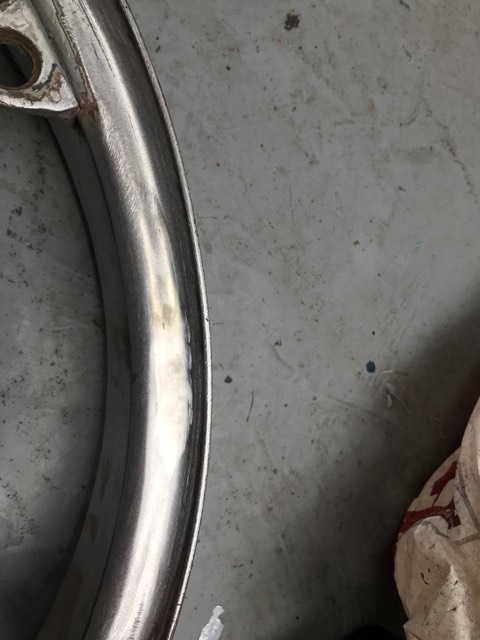 Some pics from yesterday's rally: 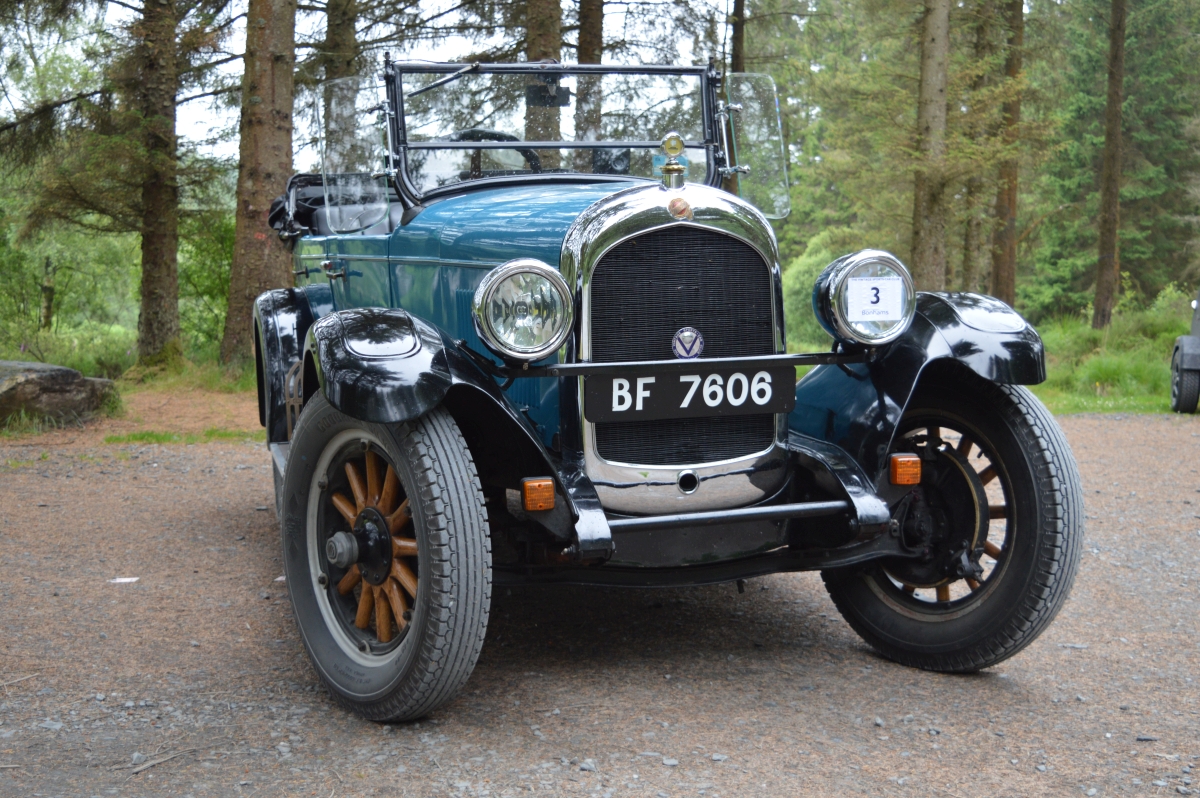 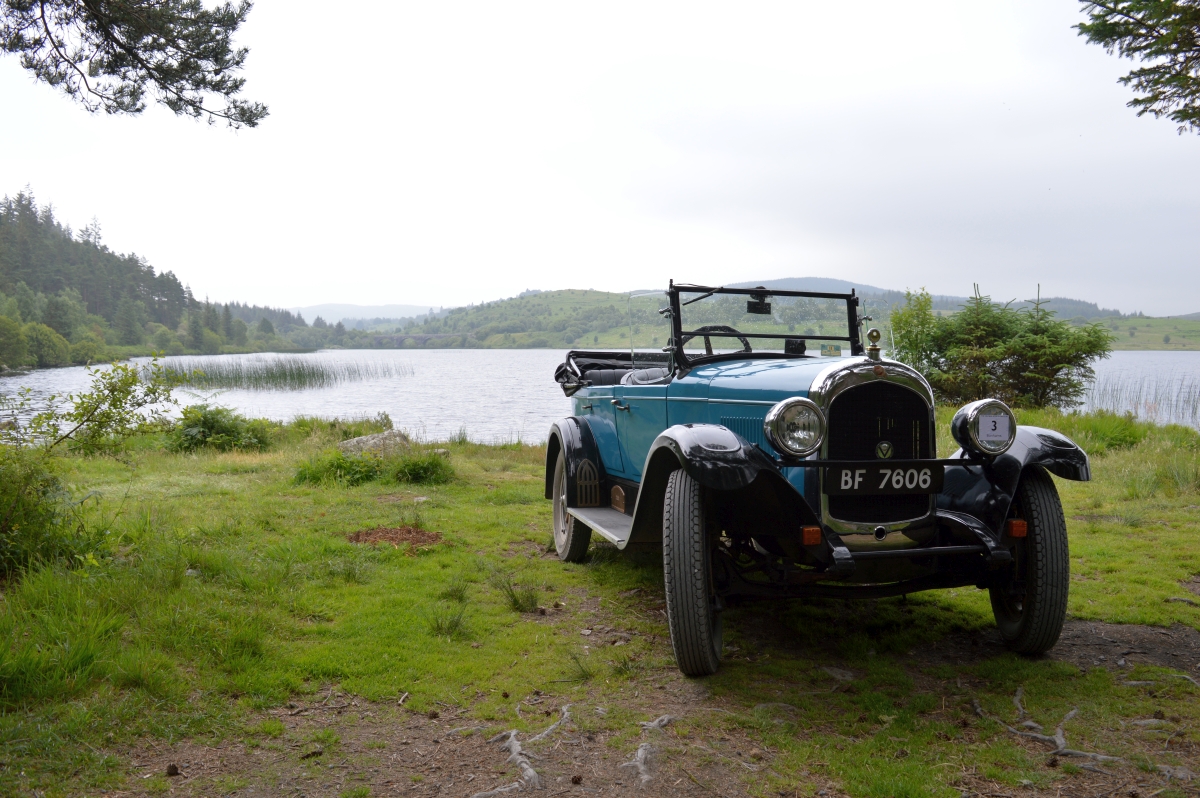 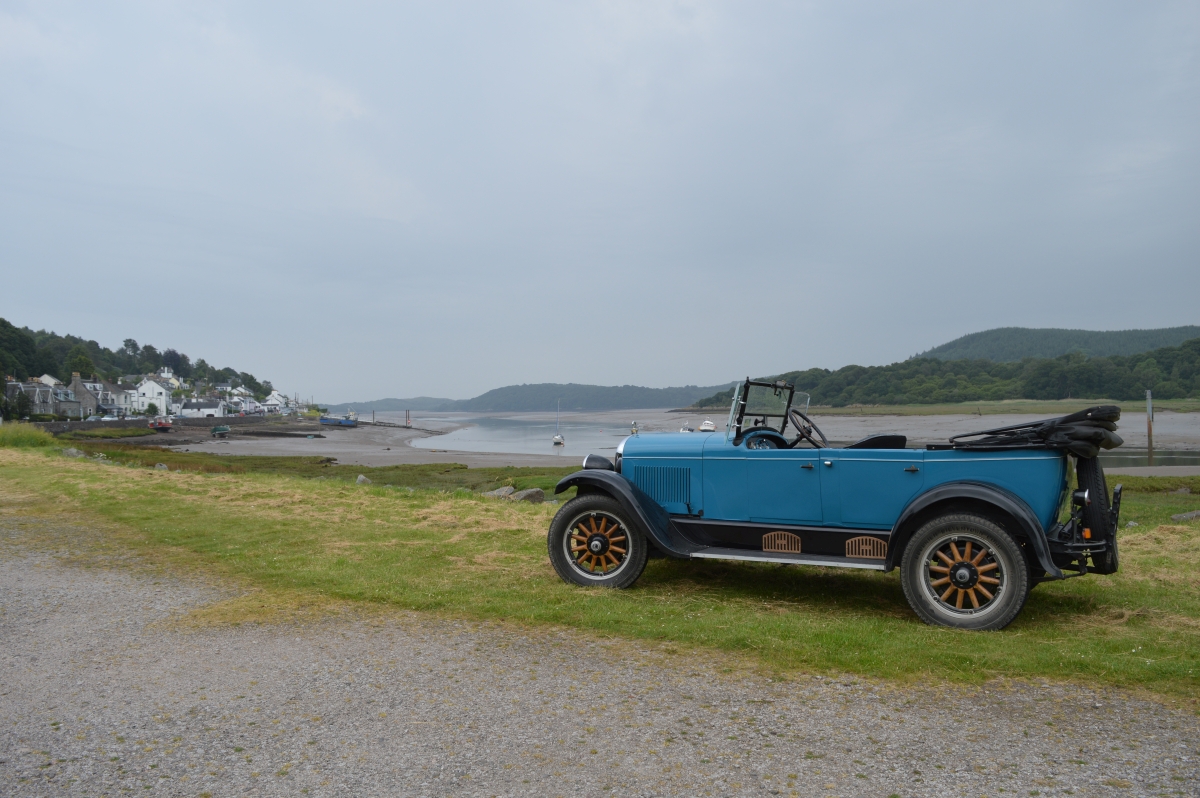 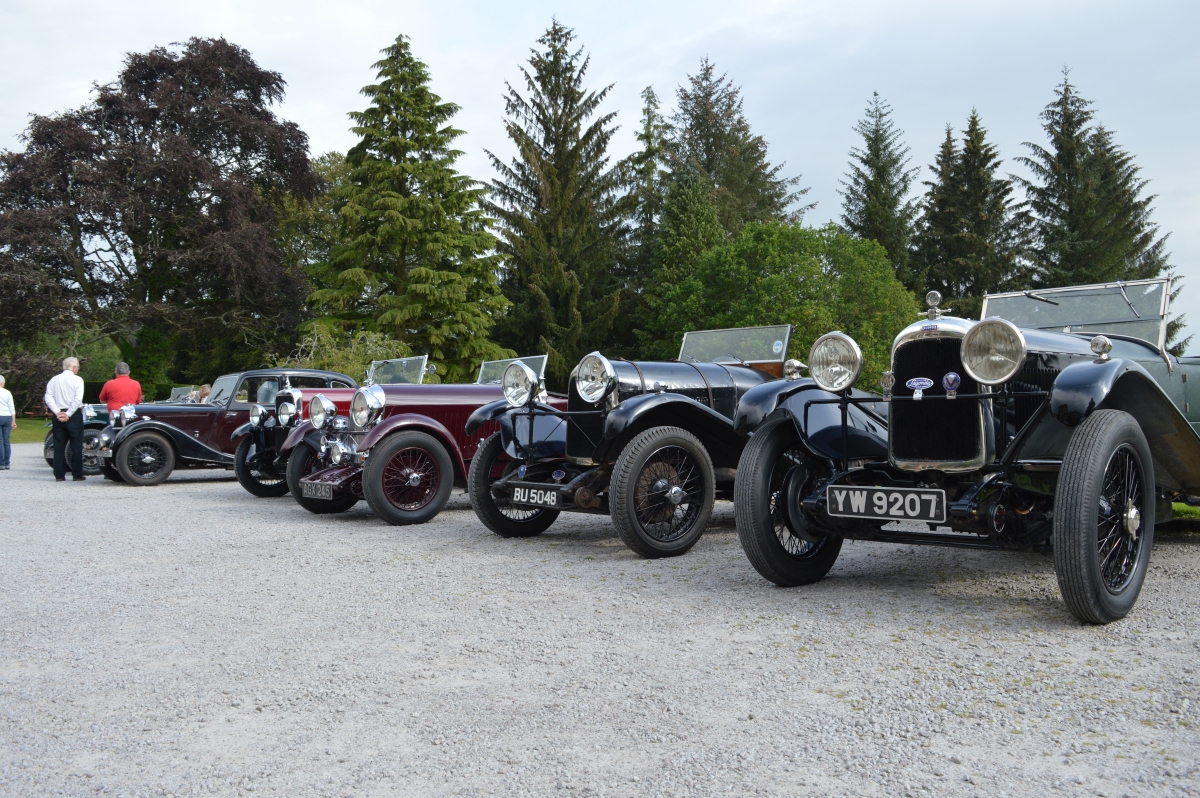 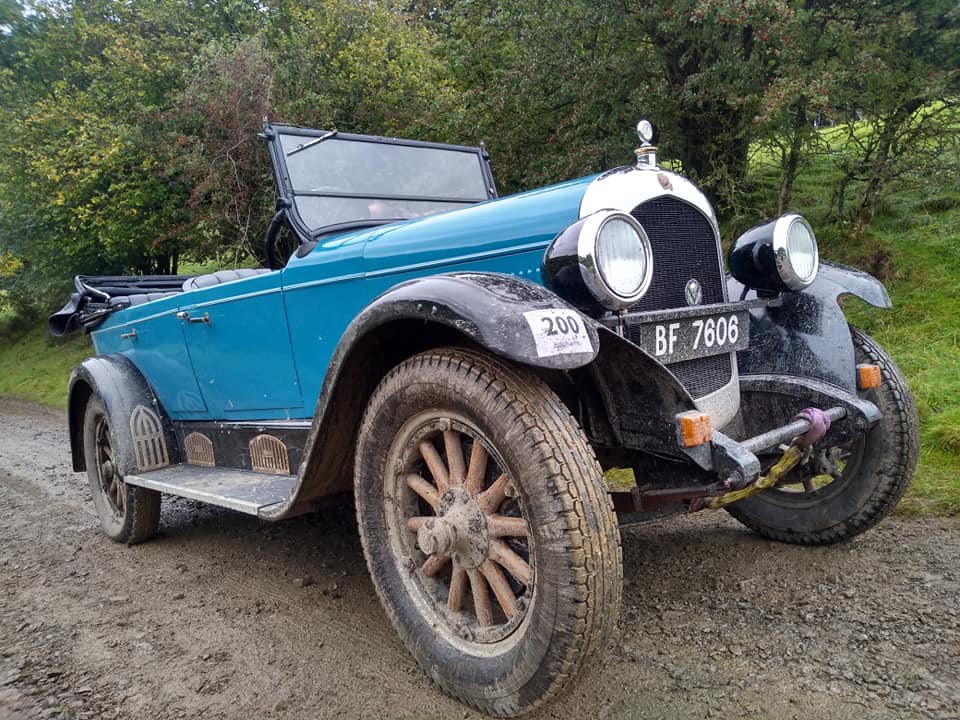 Well, I did say it would do one trial a year.

VSCC Welsh trial at the weekend, which my Austin isn't eligible for. I've never trialled a LWB car before, and competing against the big cars was a different experience. It certainly requires a different skillset and more input from the bouncing crew that in the Austin. Still I enjoyed myself and the car didn't fair as badly as expected (i.e. I wasn't stone dead last). Even better - nothing broke! Unfortunately there's no video from this one as the GoPro unceremoniously detached from the car after the first hill. 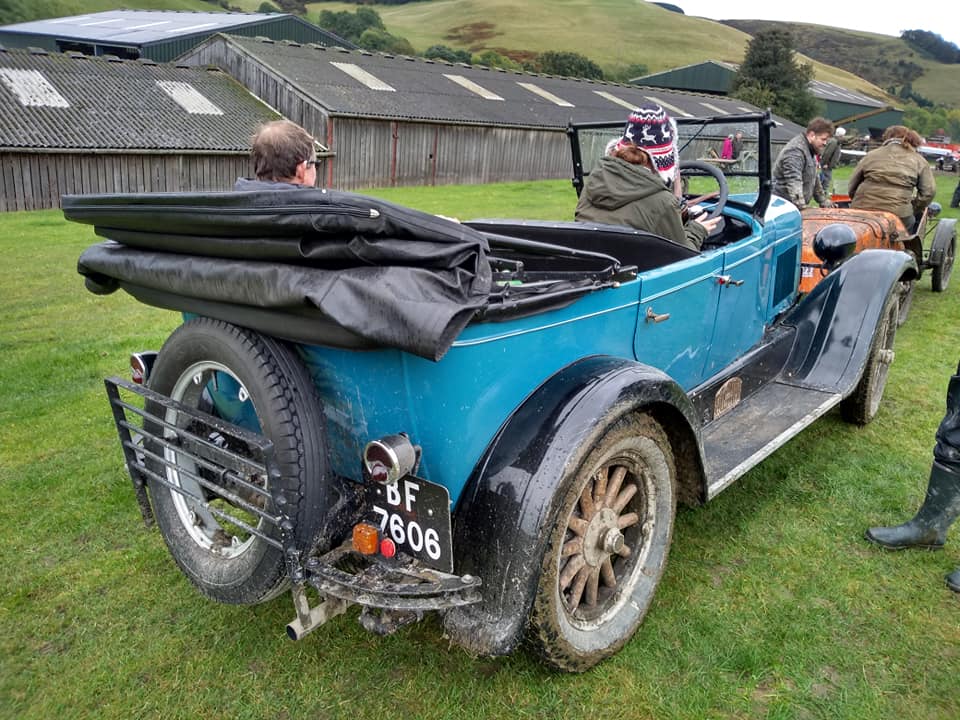 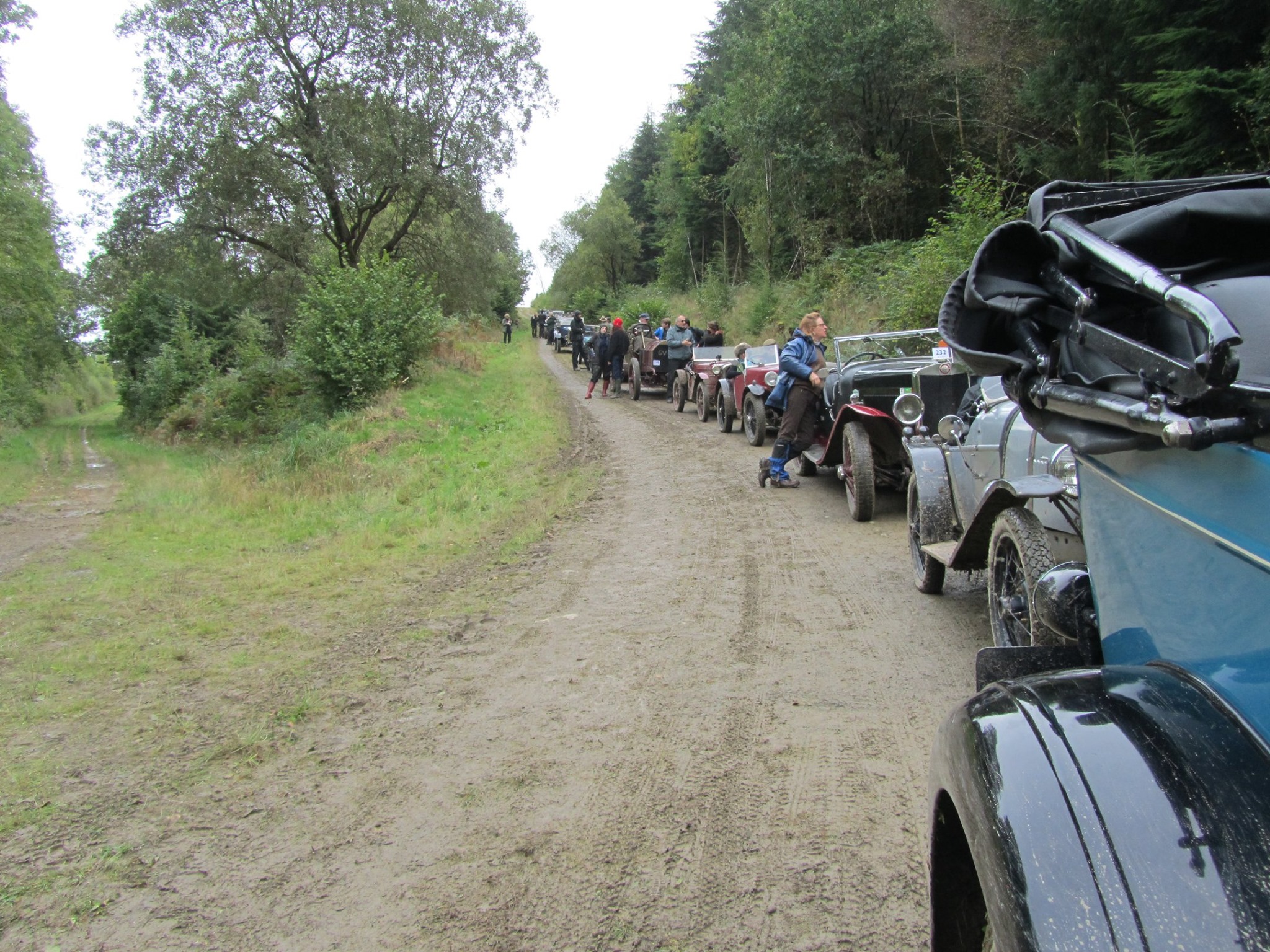 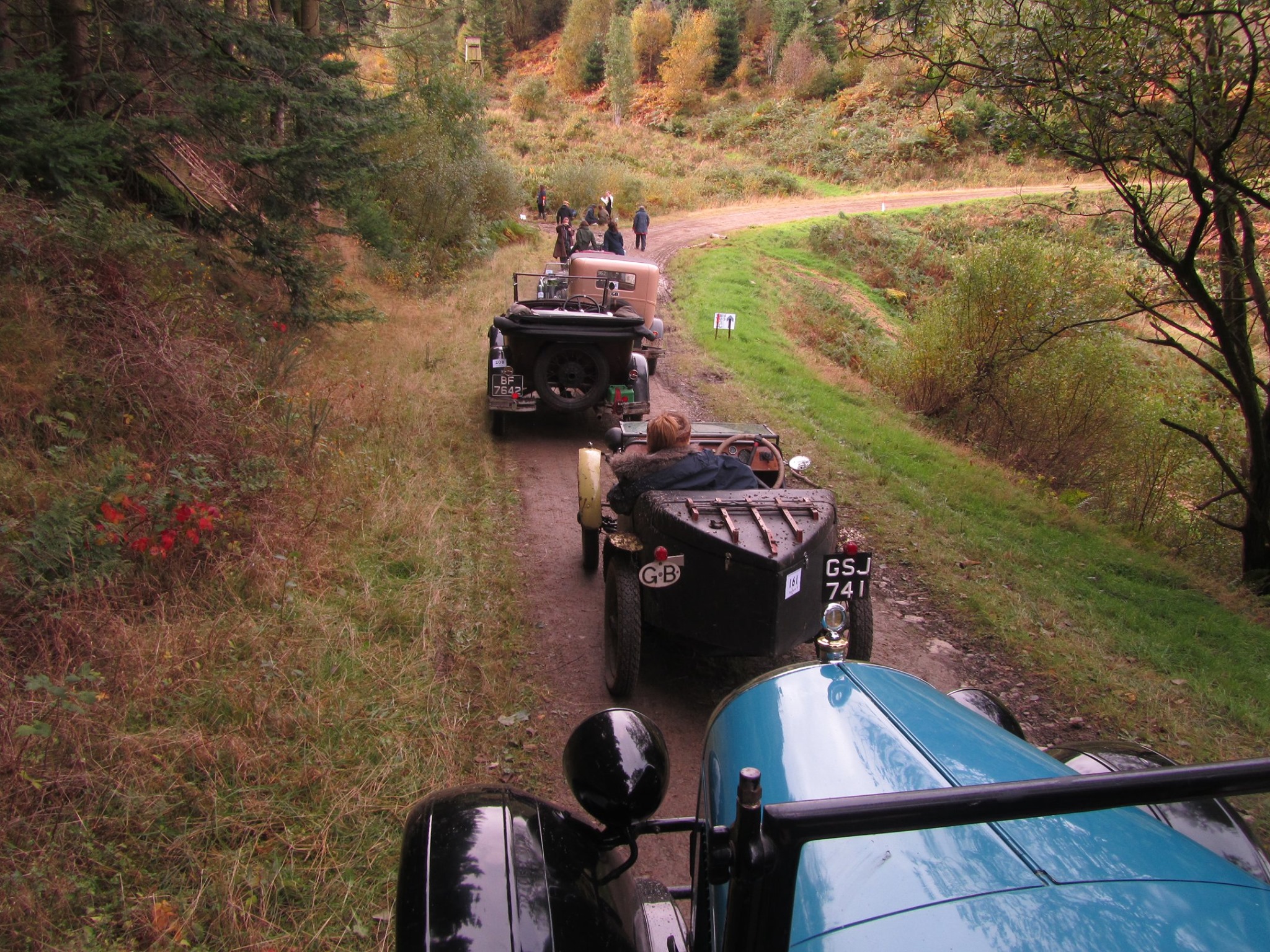 Just looking back above, I had nearly completely forgotten I had trialled the thing! It's cleaned up so well since then.

Last weekend I took part in MG Cumbria's Christmas Cracker Run in the Chrysler. 70 odd miles in the Lake District following tulip diagrams. We took in some of the areas best roads, including three mountain passes with inclines & descents over 15%. I also decorated the car as there was an award for the best turned out vehicle keeping to the Christmas theme.

It was -5c, and the roads hadn't been gritted because they were technically closed. Let's just say that it got very squeaky bum during some of the descents. The hydraulic brakes lock the wheels too easily on ice, so I chucked it in first and used the transmission brake* to retard the descent a bit. It did work, but I felt on edge.

*It doesn't have a conventional handbrake, only a transmission brake which acts on a drum on the front of the propshaft.

Still made for some bonny pictures: 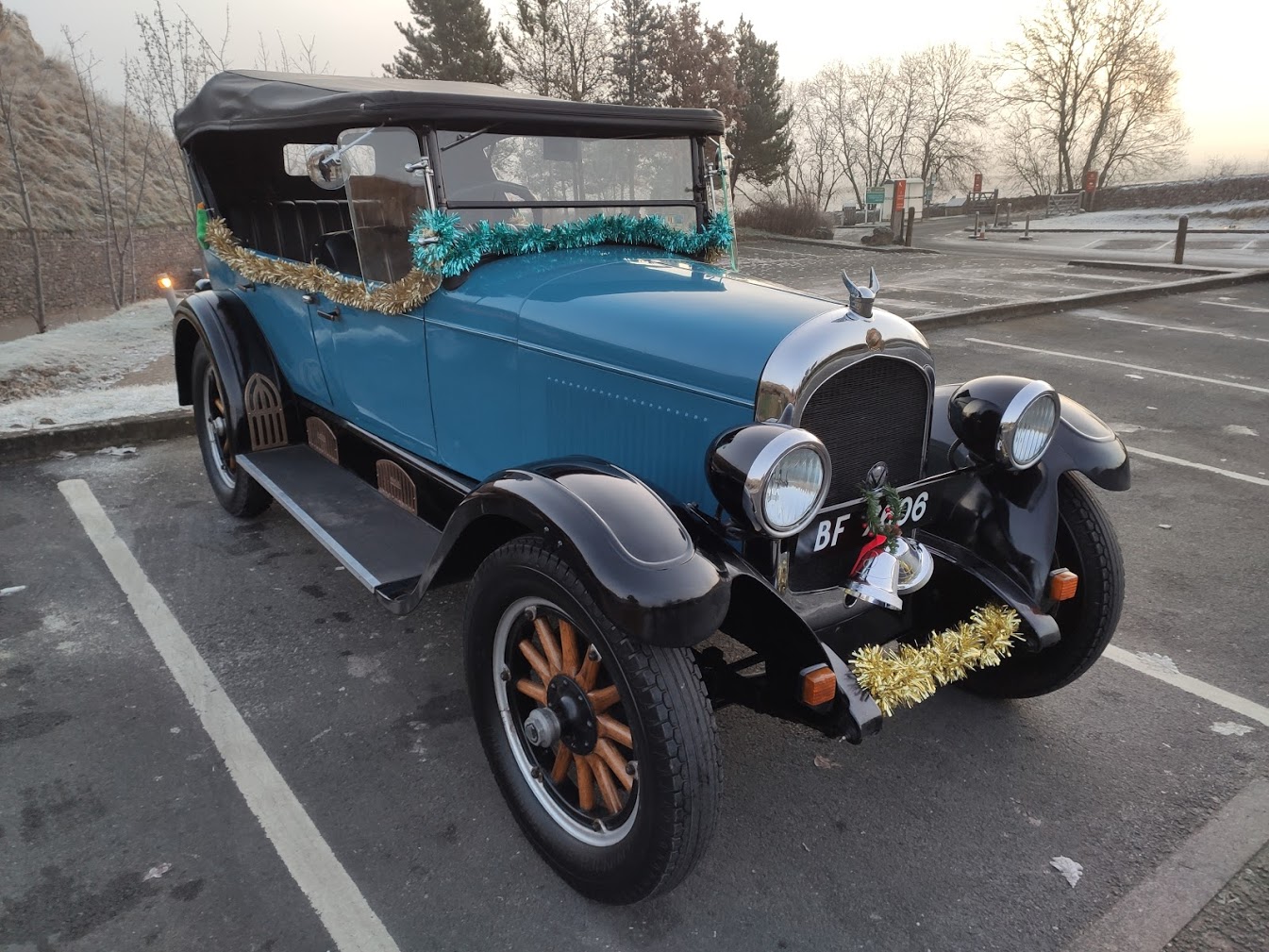 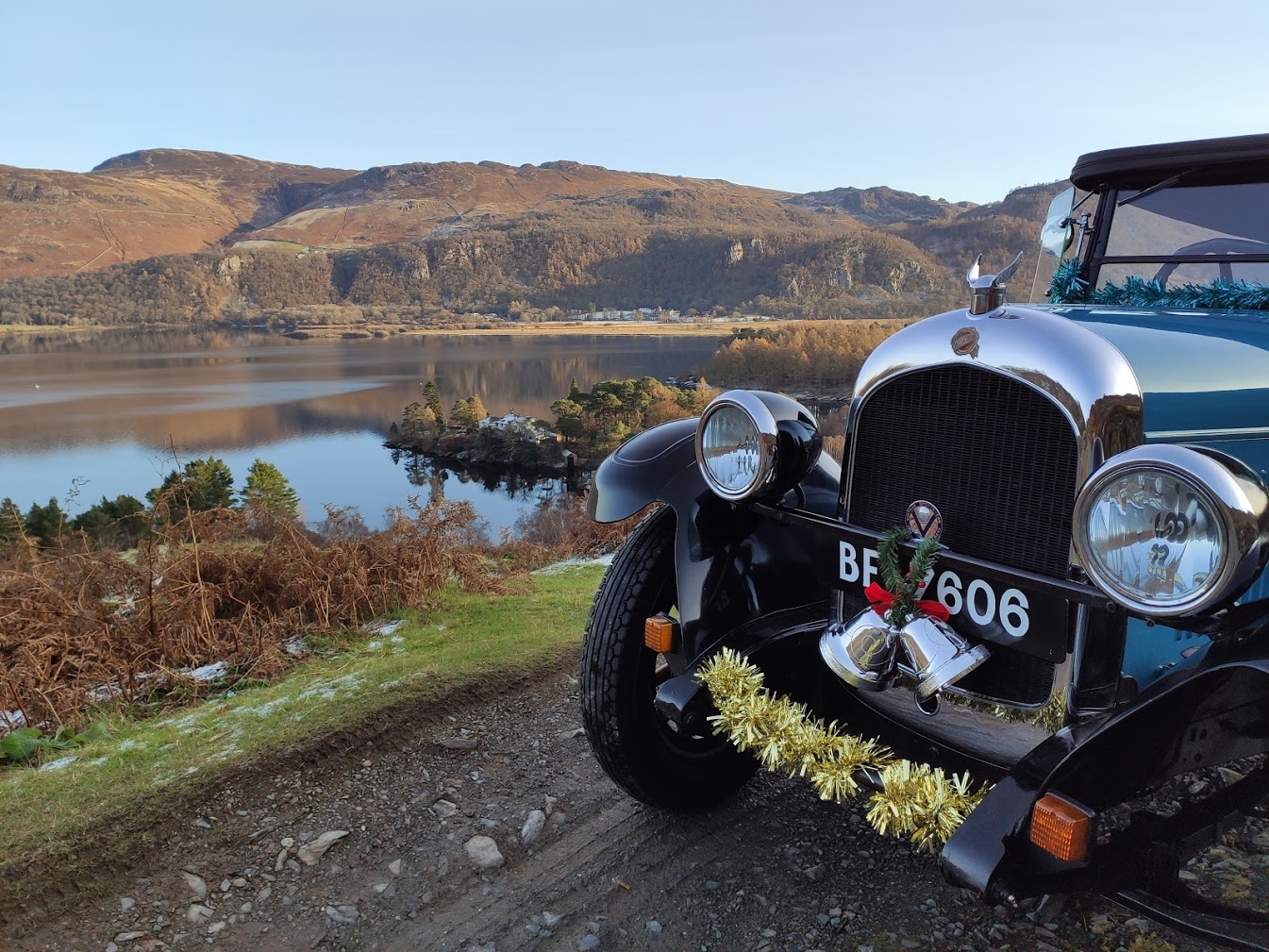 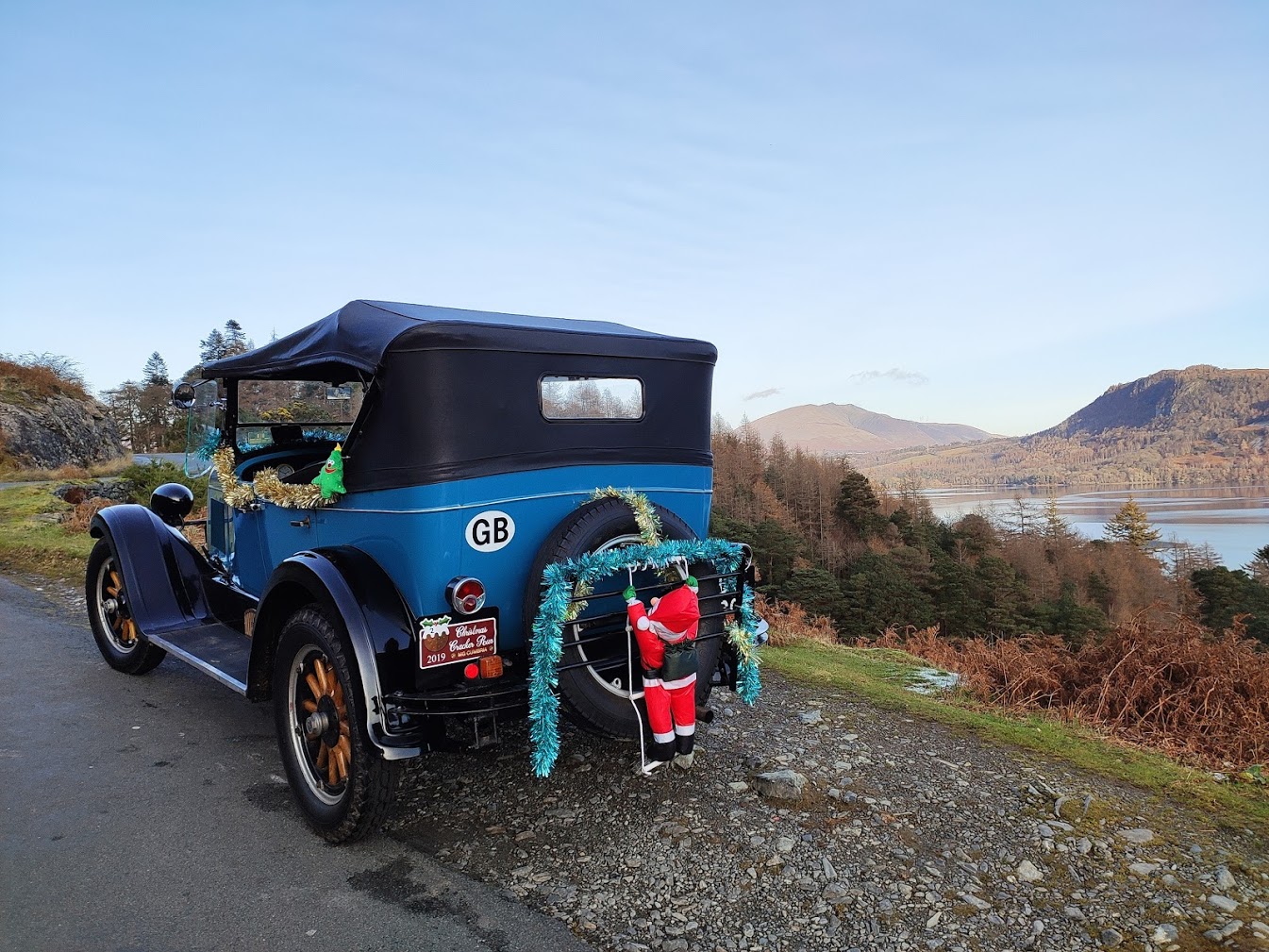 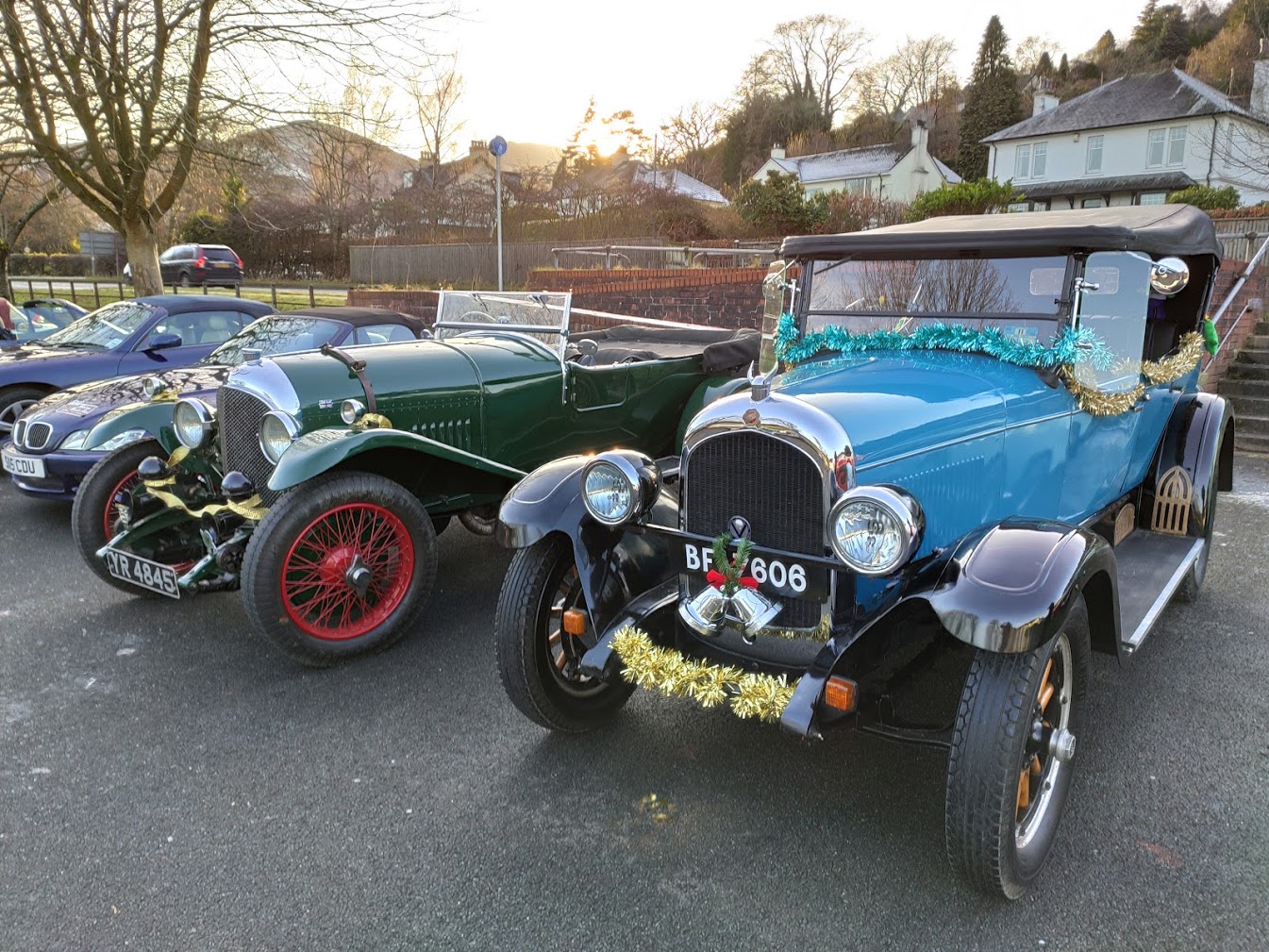 I've also been using it around town to get the shopping in etc. It's such a lovely thing to drive, I can't help myself. 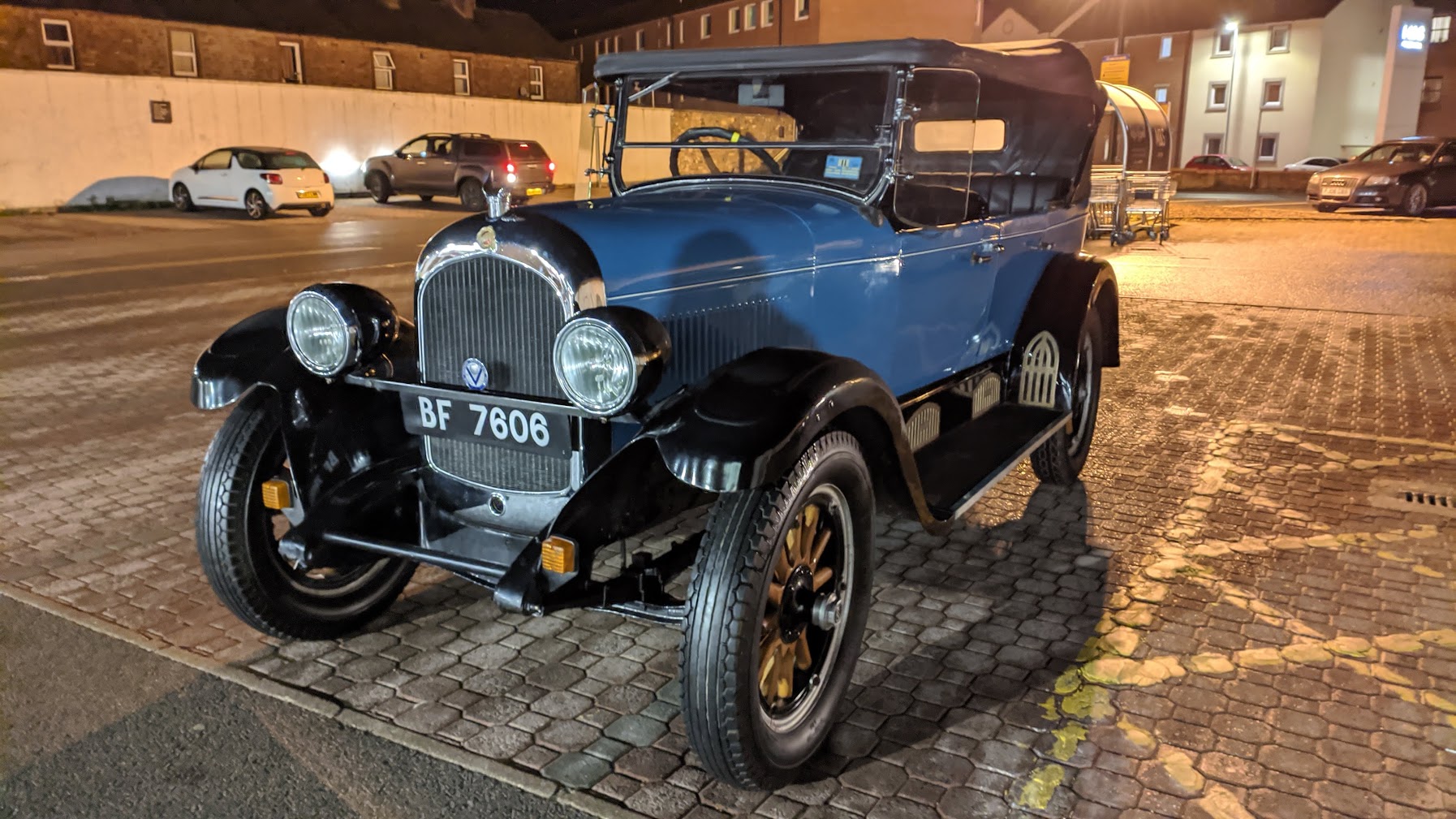 Colour still makes me think of Gumdrop.
WillDAQ: To use the technical terms: "the Mustang is to aerodynamics what horse shit is to fine dining"

I've changed the rear lights for two pairs of Ford Model A items. While it was a shame to remove the Chrysler lights, switching to Model A ones allows for an integrated indicator, and gives brighter lenses than the Chrysler ones which were very difficult to see, even with LED bulbs behind the glass. I think it's an improvement! I've got stainless trims coming for the Model A lights as the rear does look a little dark without them, and then they will better mimic the original Chrysler lights. Plus it does mean the number plate is actually visible now I've binned the awful indicator bracket.

Getting rid of those modern square lights is much more significant than losing the chrome originals, I think the twin-light setup looks much more fitting too. Bob on.

2020 being the damp squib it was, I didn't get out much in the Chrysler last year. Have a few parts coming over from the states for it currently, so looking forward to giving it a good mechanical going over soon.

Here's a pic from today.

Received a few parts from the US over the last couple of weeks. New points, rotor arm, condenser and dizzy cap to keep on the shelf.

New manifold gaskets were much needed, and have solved a couple of exhaust leaks which were driving me mad. Removing the manifold wasn't too bad, no stuck bolts thankfully, but it did require removing the carb. This gave me a chance to clean that up a bit, removing a lot of sludge and Australian dust from the bowl. I could really use a carb rebuild kit but the one US stockist absolutely positively won't deal with people in the UK. The gaskets came from Olsen's, ordered on Thursday, arrived at my house on the Tuesday. Amazing. Think they were NOS as well, definitely good old copper and asbestos jobs anyway.

I also received a neoprene fuel float and new gaskets for the fuel gauge. This has been intermittent at best and stopped reading altogether the other month, plus it would leak from the glass. The new float and gaskets have solved this, so I can finally tell how much fuel I have! After I've got out the car and walked around the back that is.

The old cork was rather tired:

Andeh said:
and gives brighter lenses than the Chrysler ones which were very difficult to see, even with LED bulbs behind the glass.
Click to expand...

I tried this in an old Volvo of mine. A bit of armchair science (and do correct me if I'm wrong):

You create red light by placing a red piece of glass in front of a bulb. The bulb puts out a broad spectrum of colours and the red glass filters out all the wavelengths that aren't red.

A LED bulb doesn't have a very broad spectrum. That's how it manages to be brighter while using less power - you're cutting out most wavelengths including the invisible ones - and most of the red. So when you put a red filter in front of a bulb that doesn't put out much red, you're left with nothing.
2014 Opel Insignia Country Tourer Biturbo CDTI 4x4
For once I don't have the same car as everyone else.

Perc said:
I tried this in an old Volvo of mine. A bit of armchair science (and do correct me if I'm wrong):

You create red light by placing a red piece of glass in front of a bulb. The bulb puts out a broad spectrum of colours and the red glass filters out all the wavelengths that aren't red.

A LED bulb doesn't have a very broad spectrum. That's how it manages to be brighter while using less power - you're cutting out most wavelengths including the invisible ones - and most of the red. So when you put a red filter in front of a bulb that doesn't put out much red, you're left with nothing.
Click to expand...

That makes perfect sense, thanks for the detail! LED certainly exaggerated the problem, but even a conventional bulb was very dim behind the old lenses, they are incredibly thick and not particularly translucent. I'm not sure if standards were much lower in the 20s for illumination or if they had become more opaque over time.
Photobucket can sod themselves
'04 Fiesta '06 & '03 Mondeos '65 Anglia '29 Austin 7 '86 Fiesta '69 Corsair
'31 Rover Two Litre​

Andeh said:
I'm not sure if standards were much lower in the 20s for illumination or if they had become more opaque over time.
Click to expand...

i think the standard back than was "wow, electrical lights, cool!"

100 years ago, we most certainly didn't have the regulatory bodies we have today. Every light fixture on the outside of every car has passed scrutiny to make sure that, for instance, the brake lights are bright enough and sufficiently brighter than the normal tail lights. Someone has also made sure that the front indicators are visible from all the required angles. All of this is to make sure that the average motorist doesn't have to learn what the indicators on the new model year of Peugeots look like because it looks roughly like every other indicator on the road. Etcetera.

Why we have these rules became very obvious when I got to look at a privately imported Chevy van up close and someone had managed to get it registered in Finland using 5W amber sidelights from a trailer as front indicators. Front indicators are supposed to use 21W bulbs. I guess a clueless MOT engineer just saw the E approval markings and figured it was ok, and "let the car into the country" so to speak.

This concludes today's lesson.
2014 Opel Insignia Country Tourer Biturbo CDTI 4x4
For once I don't have the same car as everyone else.

So in the last week I have replaced the fugly wagon indicators with some more discerete untis. A big improvement I think.

I also painted the engine as the old paint was poorly adhered and starting to flake off. It's not a perfect job as I did it in something of a hurry, but it's a driver not a showcar!