So I did a thing. 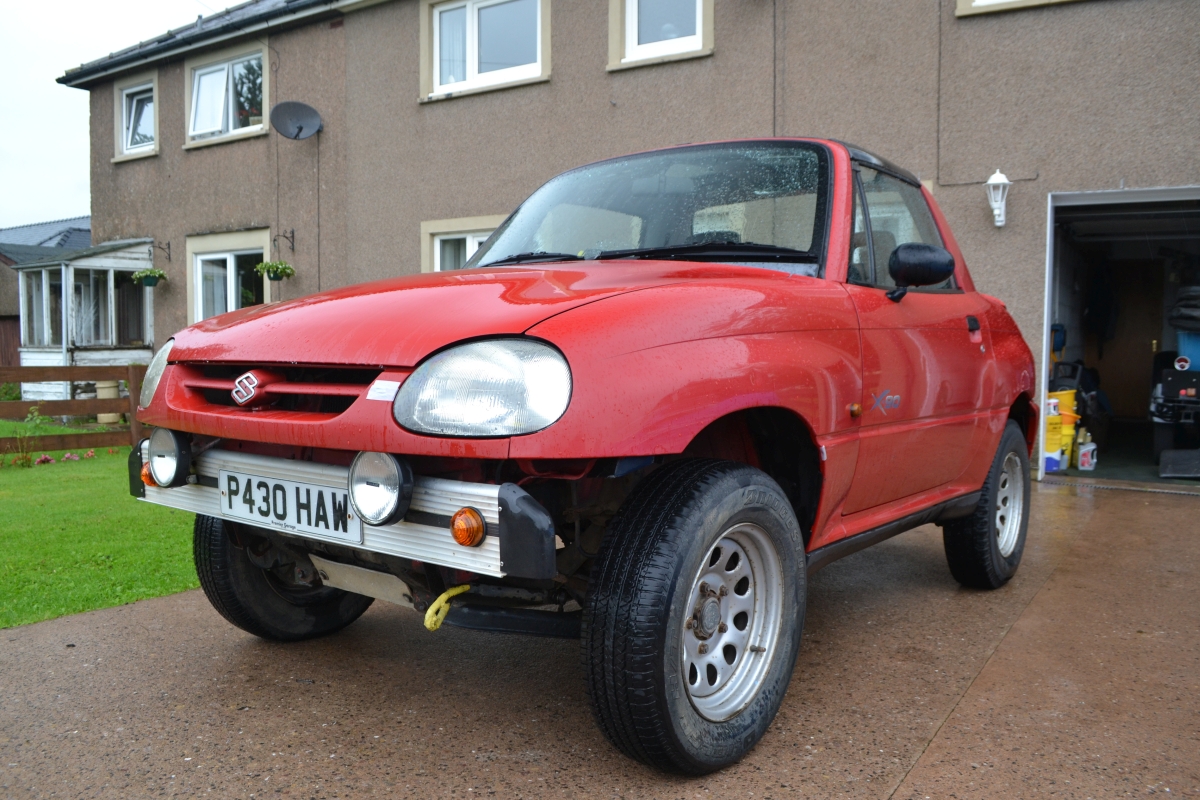 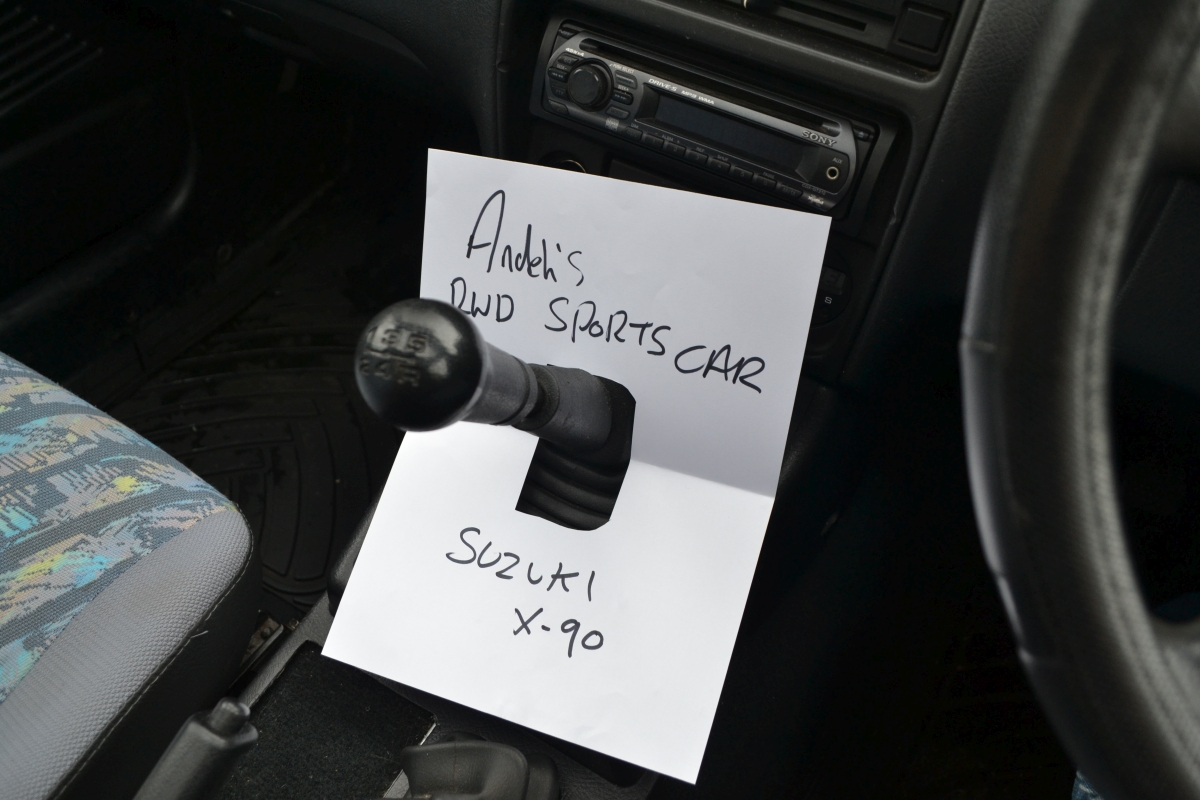 To make a long story short, I love trialling the Austin, and I want to take it out on the 'big 3' MCC long distance trials. These are trials which run overnight, include hundreds of road miles and some of the most difficult hills. Before I enter the Austin blindly though, I wanted something more comfortable so I could eye up the events in a more modern machine.

Enter the Suzuki X-90. Widely reported to be one of the worst cars ever made (Top Gear Magazine) it was Suzuki's attempt at creating a car which the world didn't need. Namely an off road two seater coupe with a T-top. About 1,000 made it to the UK during it's two short years, with about 500 as RWD and 500 as 4WD. As I'm only interested in doing classic trials, 4WD is banned, so this is the RWD model.

It has been fitted with the transfer box from a Vitara, so I do have low gearing for when I'm out on the hills. It's also been raised, the tail weighed down for extra traction and some sump guards made. 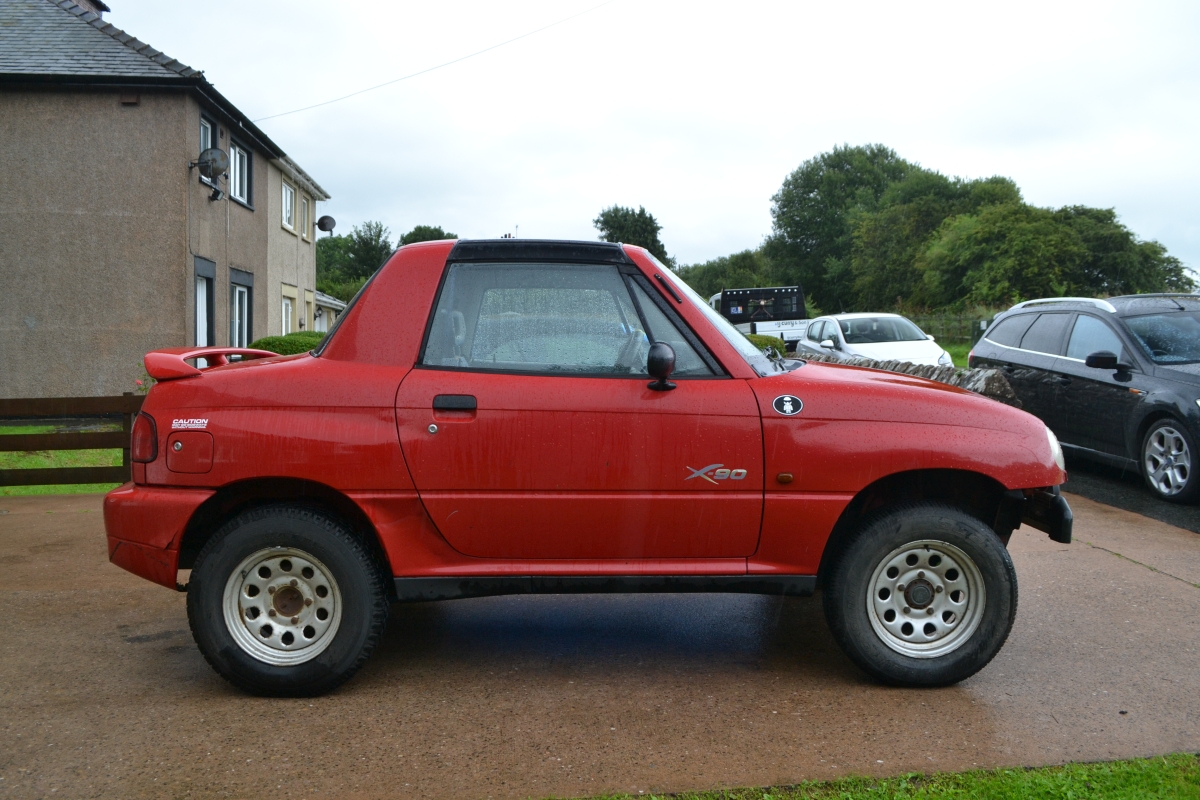 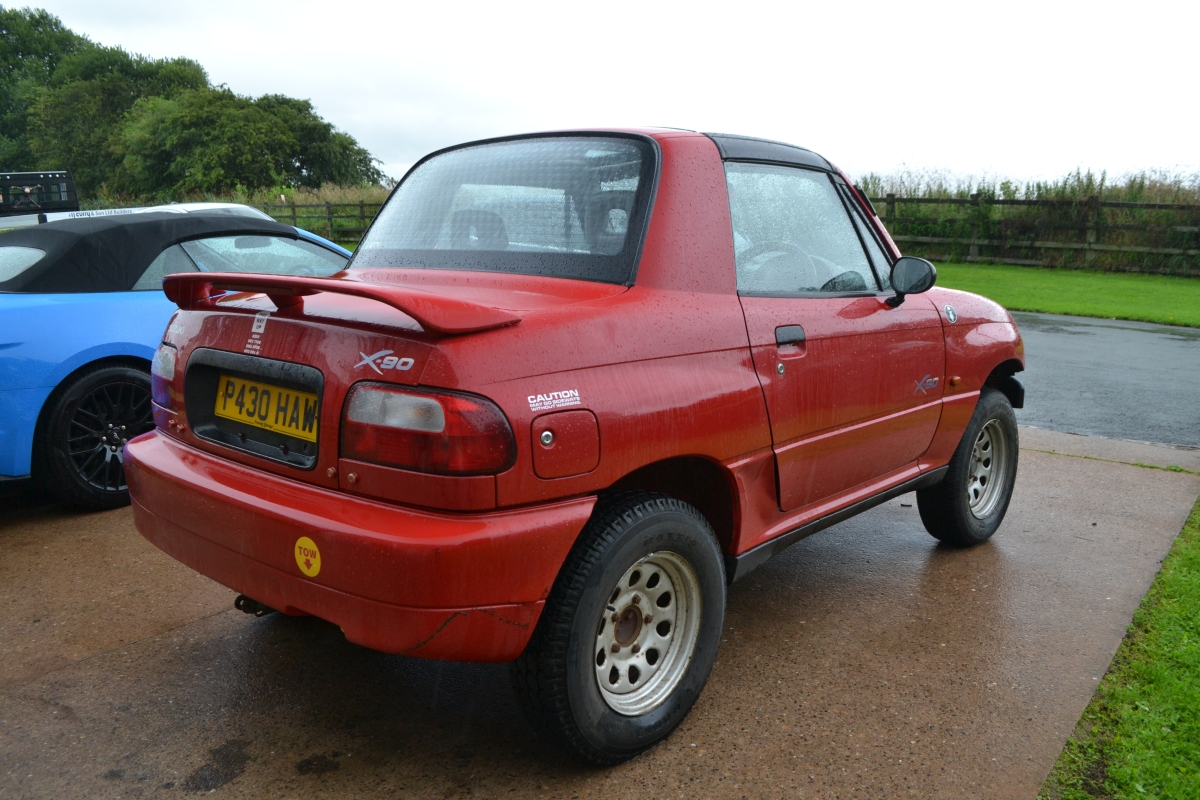 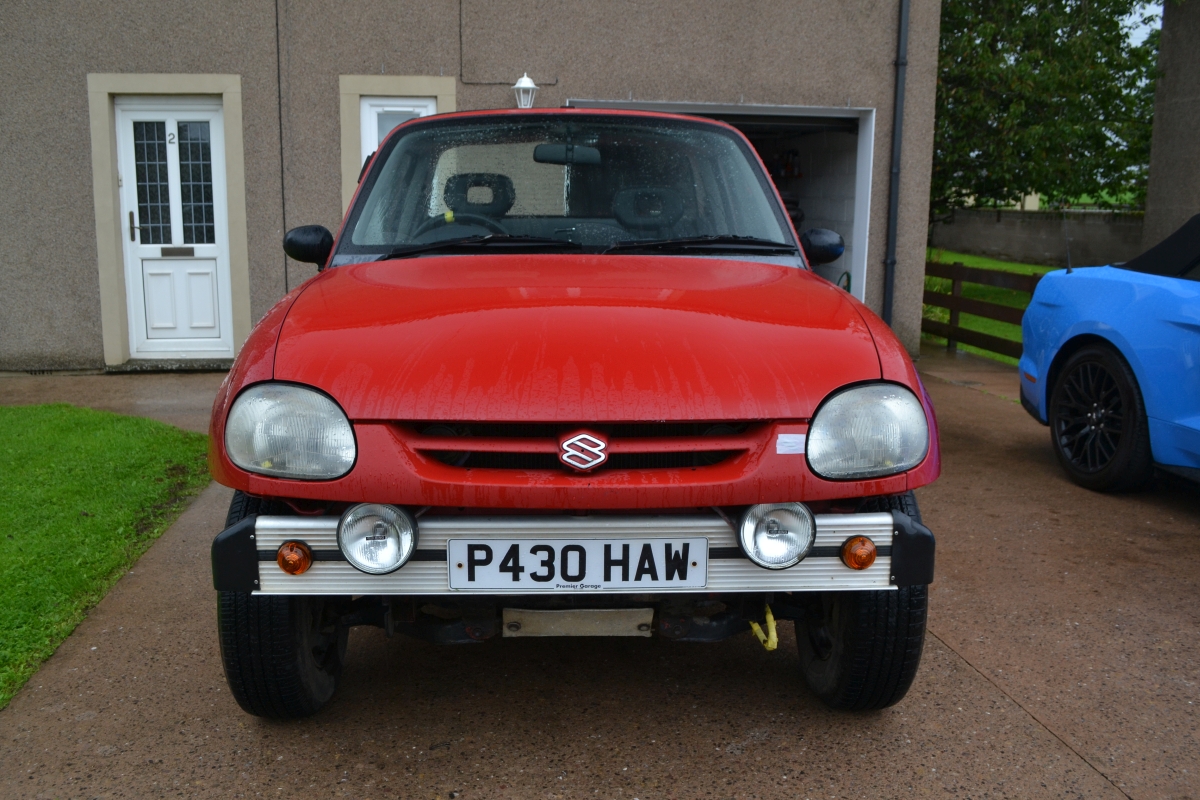 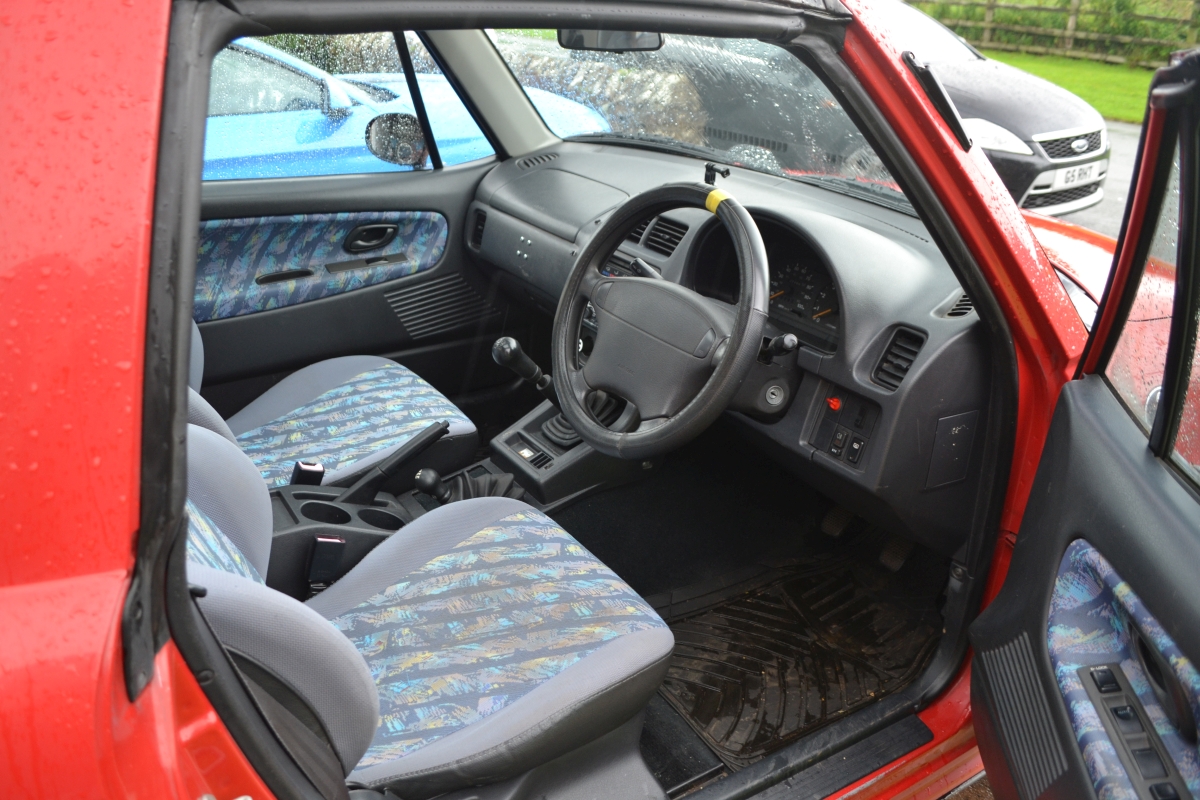 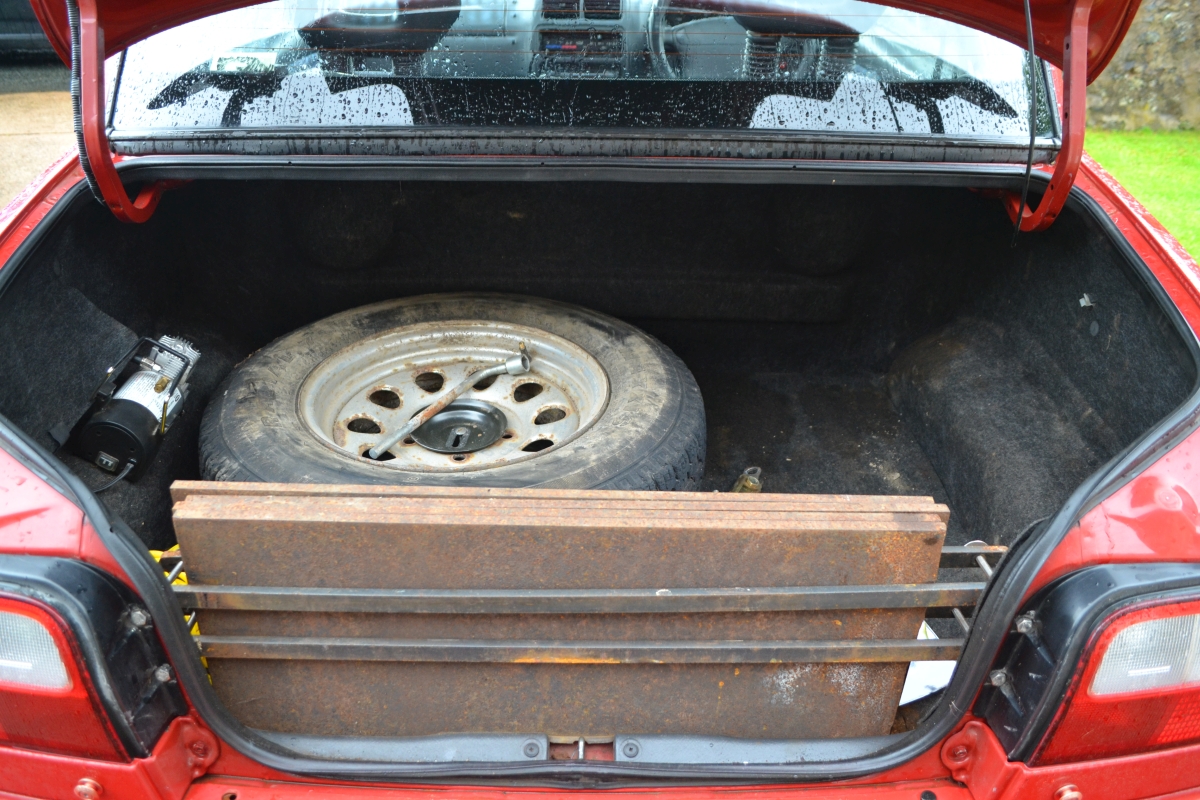 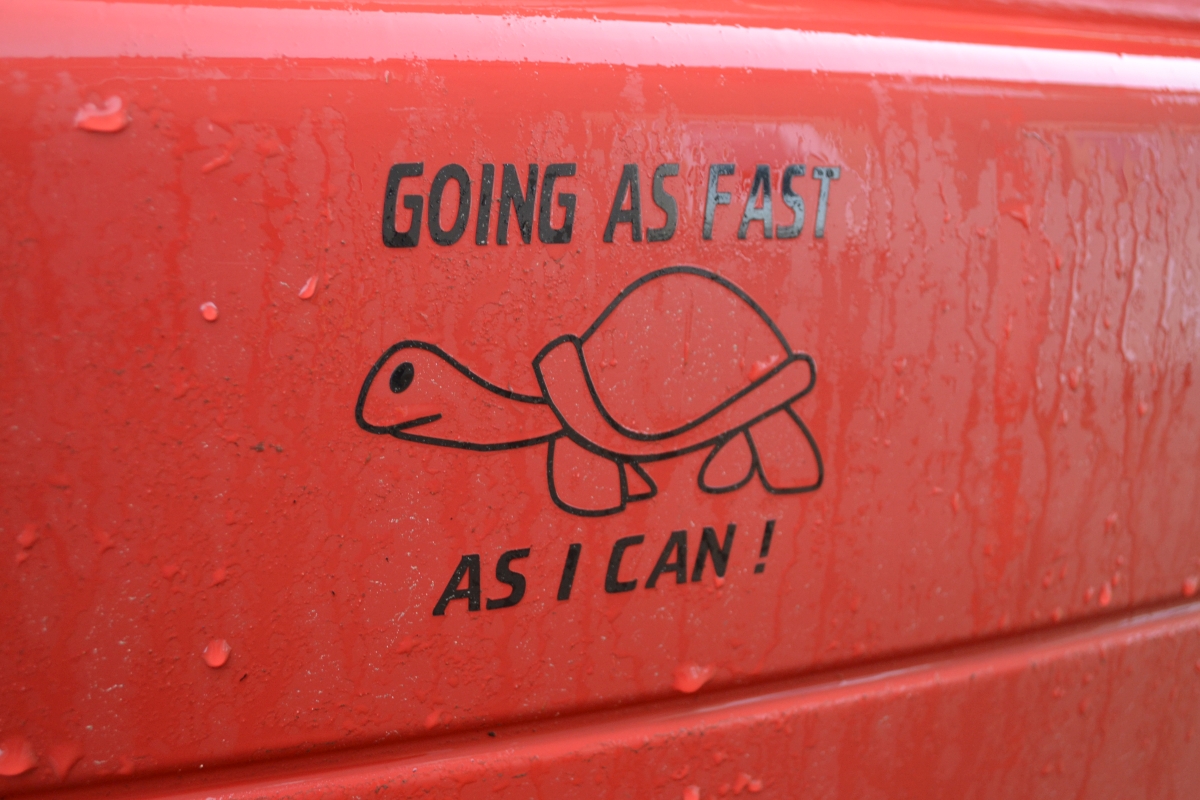 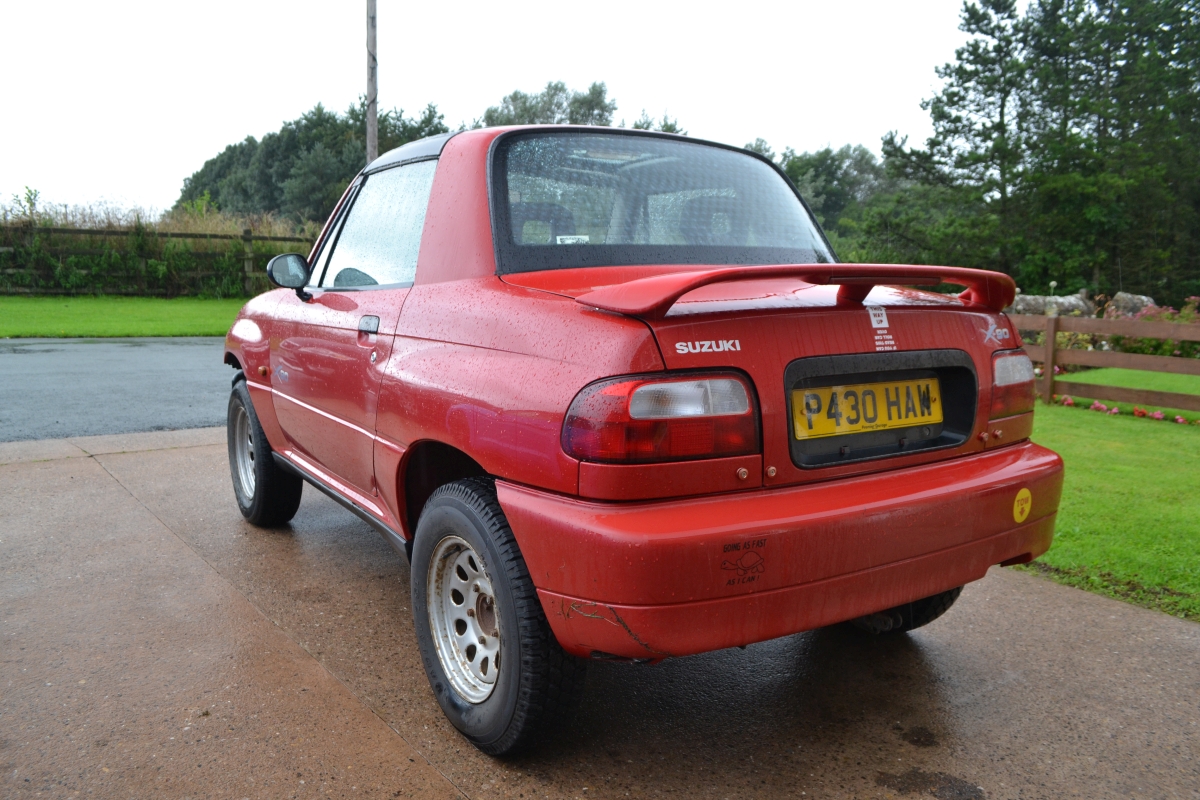 They developed a real place on the trials scene, as a cheap RWD car that's practical on the hills, durable and cheap to repair.

They're not fantastic in the results, and I've frequently beaten them in the Austin before on other events, but I'm not out to win with this car, just check out some different events! This one does have very good competition history though, so I'm hopeful to get the odd award in time...

Here's a video of the car in action from the previous owner:

I quite like the quirky little thing! Seems like it's nicely kitted out for the trials scene, and so long as you're smiling while you're driving them, I think it's a proper ride! Just remember sunscreen on the tops of your ears
"Well, that's fine. You waste your money on a Mustang or a Ferrari. The fact is that if you want a sports car, the MX-5 is perfect. Nothing on the road will give you better value. Nothing will give you so much fun. The only reason I'm giving it five stars is because I can't give it 14."
--Jeremy Clarkson on the NC MX-5

I always thought this was one of those, "No one asked for it, so why did they build it?", type of vehicles.

What is the front bumper though?
I've always had an irrational fear of anamorphic armadillos.​

I love those, in a quirky, very cheeky way.
Moths are just goth butterflies.​

CraigB said:
I always thought this was one of those, "No one asked for it, so why did they build it?", type of vehicles.

What is the front bumper though?
Click to expand...

It's definitely the answer to a question no one asked.

The original bumper cross member was completely rotten, so the previous owner removed and made what you see.

So they do have a purpose! Excellent!

Great buy, @Andeh! This car is indeed a prime example of "why". I assume they built it for those people who always drove their Samurai with the rear seats folded down/removed...

Andeh said:
The original bumper cross member was completely rotten, so the previous owner removed and made what you see.
Click to expand...

I hope no one got hurt on the bleachers where he stole that step from.

TC said:
I hope no one got hurt on the bleachers where he stole that step from.
Click to expand...

See, that's what it looks like to me as well. That's why I asked. ?
I've always had an irrational fear of anamorphic armadillos.​

Oooooh, maybe put the bleacher-bumper on a hinge so it can fold up to be parallel to the ground, lock in place, and then you have a nice place to kneel when working on the engine!
"Well, that's fine. You waste your money on a Mustang or a Ferrari. The fact is that if you want a sports car, the MX-5 is perfect. Nothing on the road will give you better value. Nothing will give you so much fun. The only reason I'm giving it five stars is because I can't give it 14."
--Jeremy Clarkson on the NC MX-5

Thank you for reminding me that these existed, I completely forgot about it.

Nice car nevertheless, I like quirky 90's Japanese stuff. Looking forward to your future adventures with it!

Surprised at all the love for what's regarded as such a terrible car.

This is FinalGear... you expect us to not fall in love with a stupid car?
"Well, that's fine. You waste your money on a Mustang or a Ferrari. The fact is that if you want a sports car, the MX-5 is perfect. Nothing on the road will give you better value. Nothing will give you so much fun. The only reason I'm giving it five stars is because I can't give it 14."
--Jeremy Clarkson on the NC MX-5

You've out-weirded me, I love it.

So things done in the last week:
Had a mate weld up the N/S inner sill and a bit of the floor. Now the whole underside is solid, good times
Repaired the N/S window winder, so that's functional
Gone through the brakes, given them a good service
Got the buff out for a quick polish

Should be ready for an MOT now, and then on to the trials hills!

Still have a bit of tidying to do, going to rub down the root and repaint the black bits as they are a bit crispy, and then try to pull some dents. In the medium term I want to refit the front bumper. 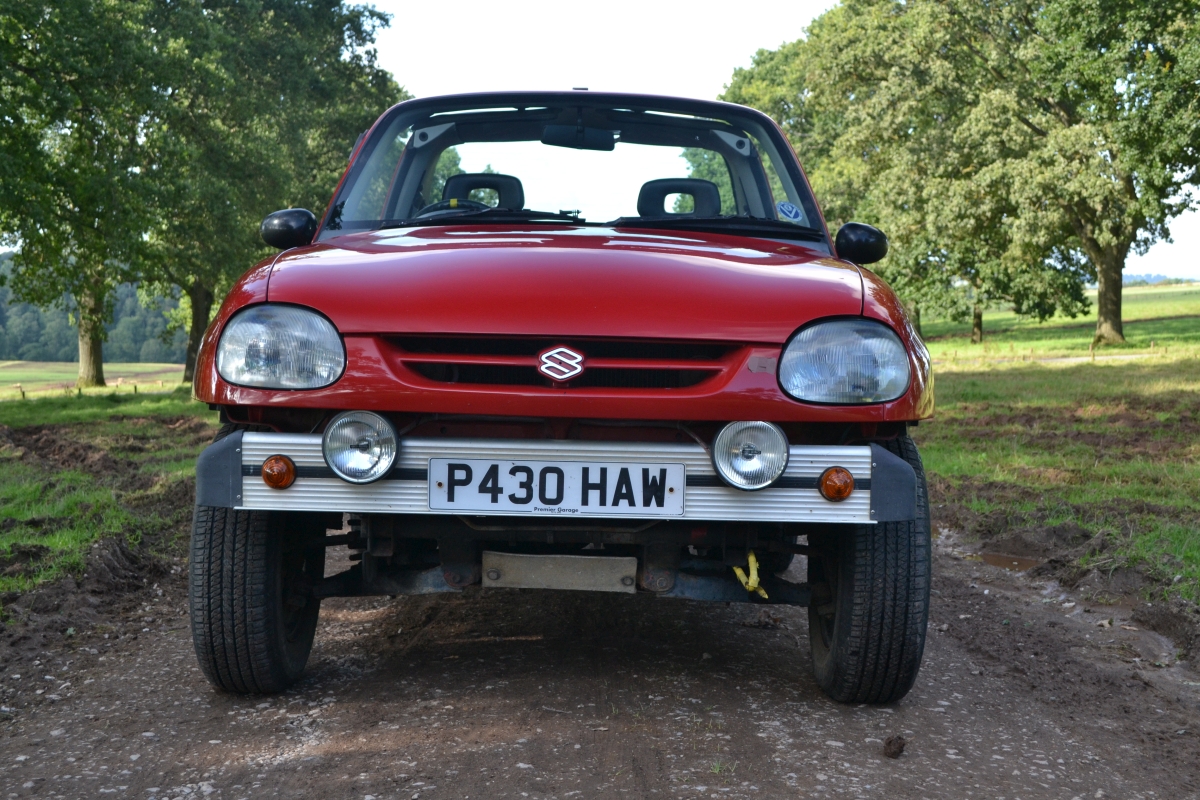 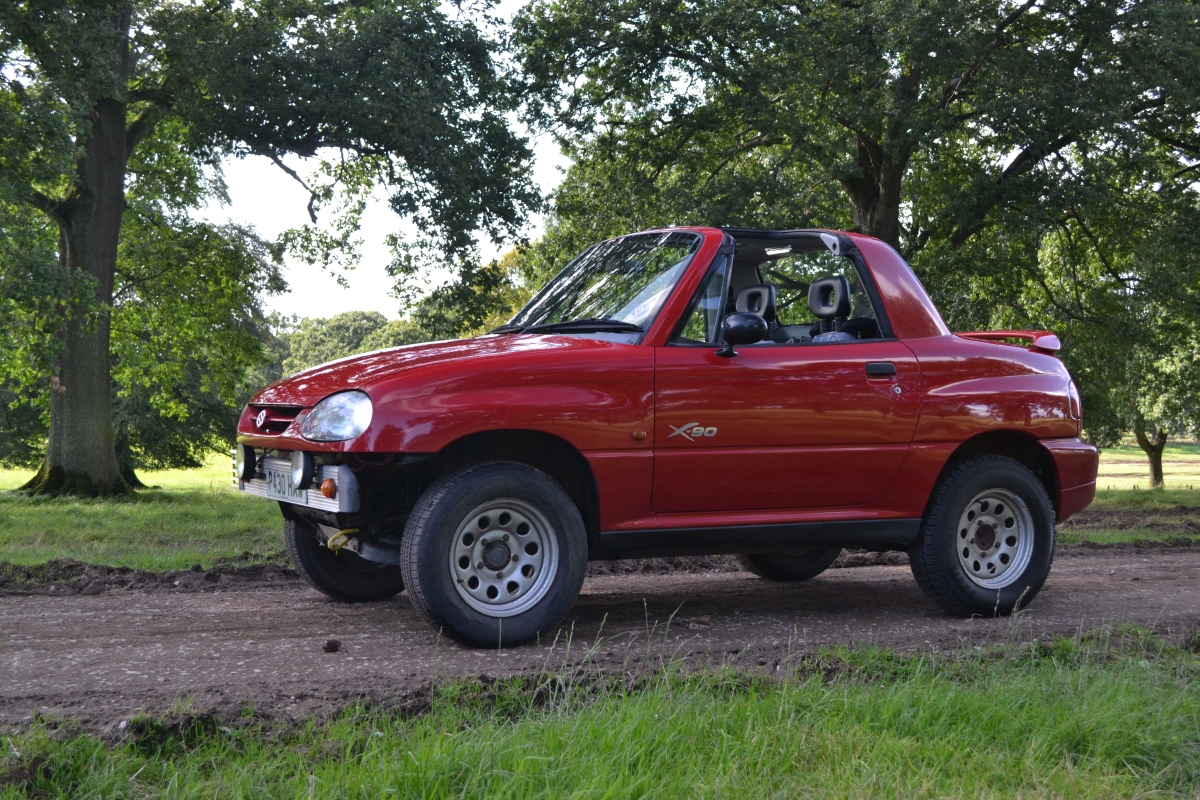 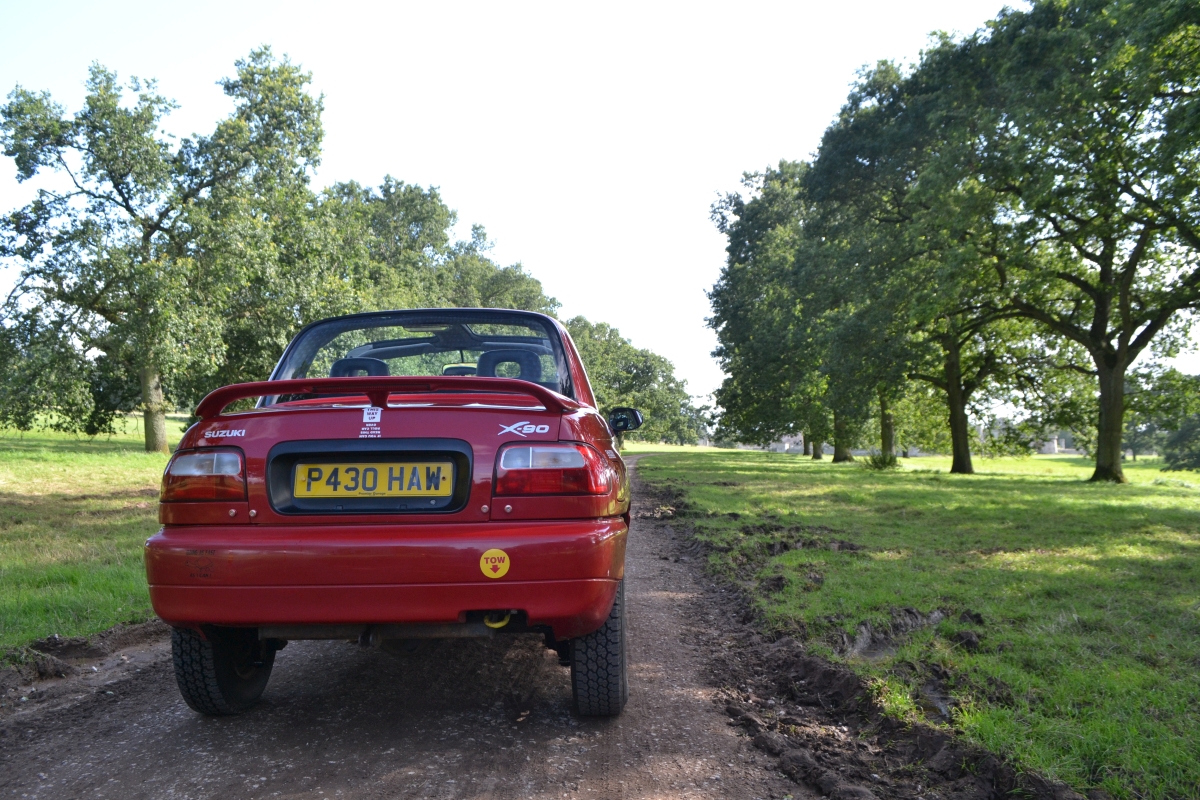 I have had the misfortune to drive one of these things and I can confirm it was one of the most awful and terrifying driving experiences of my life .

Congrats, Andeh, on being the only person to out-rickhamilton rickhamilton and making a worse buying decision than any ever made by Captain 70s.

Enjoy!
WillDAQ: To use the technical terms: "the Mustang is to aerodynamics what horse shit is to fine dining"

Did my first event a couple of weeks ago, the MCC Edinburgh Trial.

I ran in Class O which meant I didn't have to do a couple of the more difficult sections, or any restarts. This is because having not competed in the car before, I wanted a gentle introduction. Class O also had the benefit of being ahead of the pack and getting to tackle sections immediately after the motorbikes, and before the other 150+ cars of the event. This also meant that we left the start a little after 2am and were doing trials sections by 3:30am.

The MCC trials are unlike any event I've done in the Austin before, and by the time I'd driven down to the start, done the trial and driven home again I'd done over 300 miles and been behind the wheel for a cool 22 hours straight. It was fantastic fun and a real test of endurance, I can't wait for the next one. 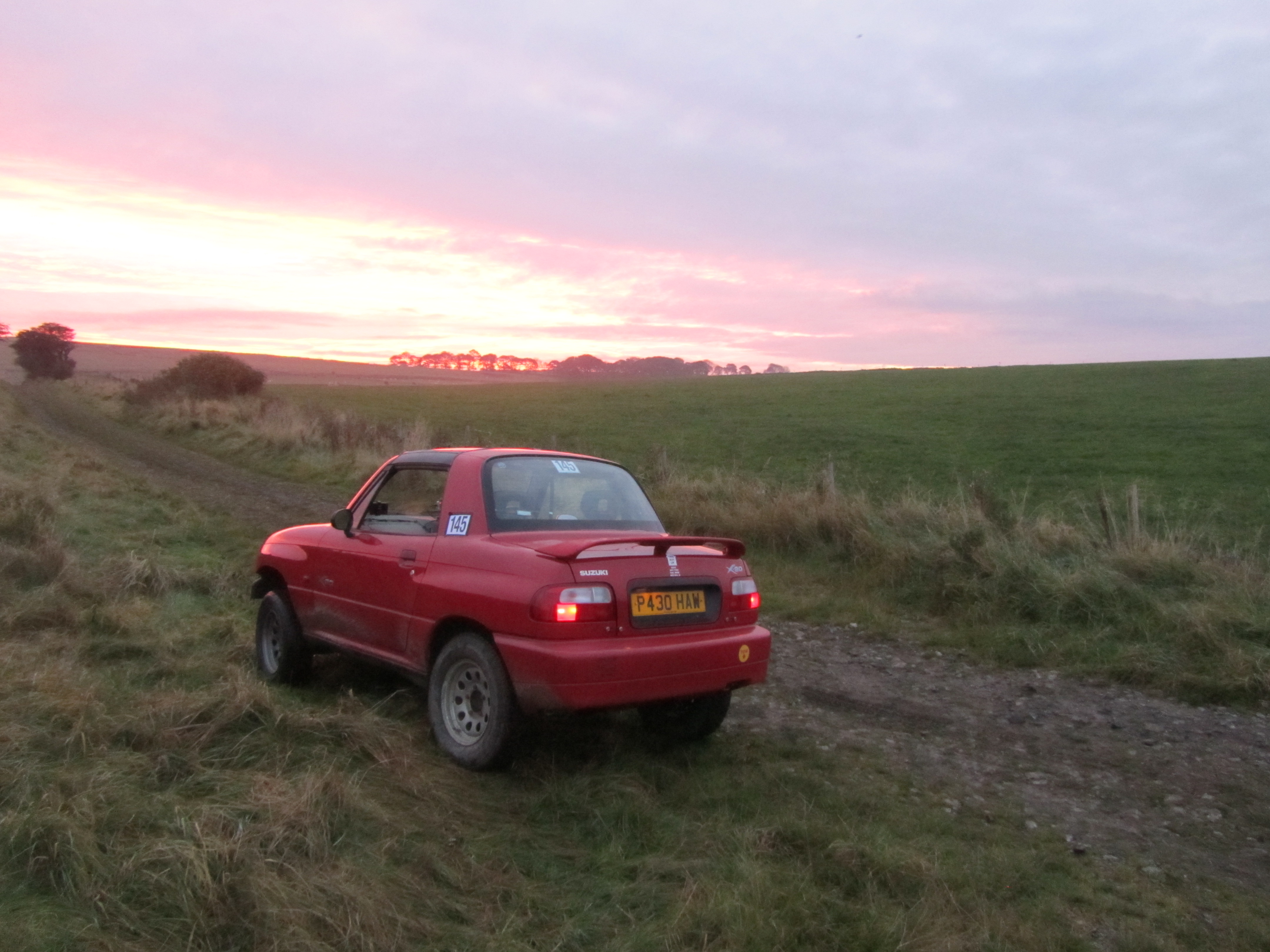 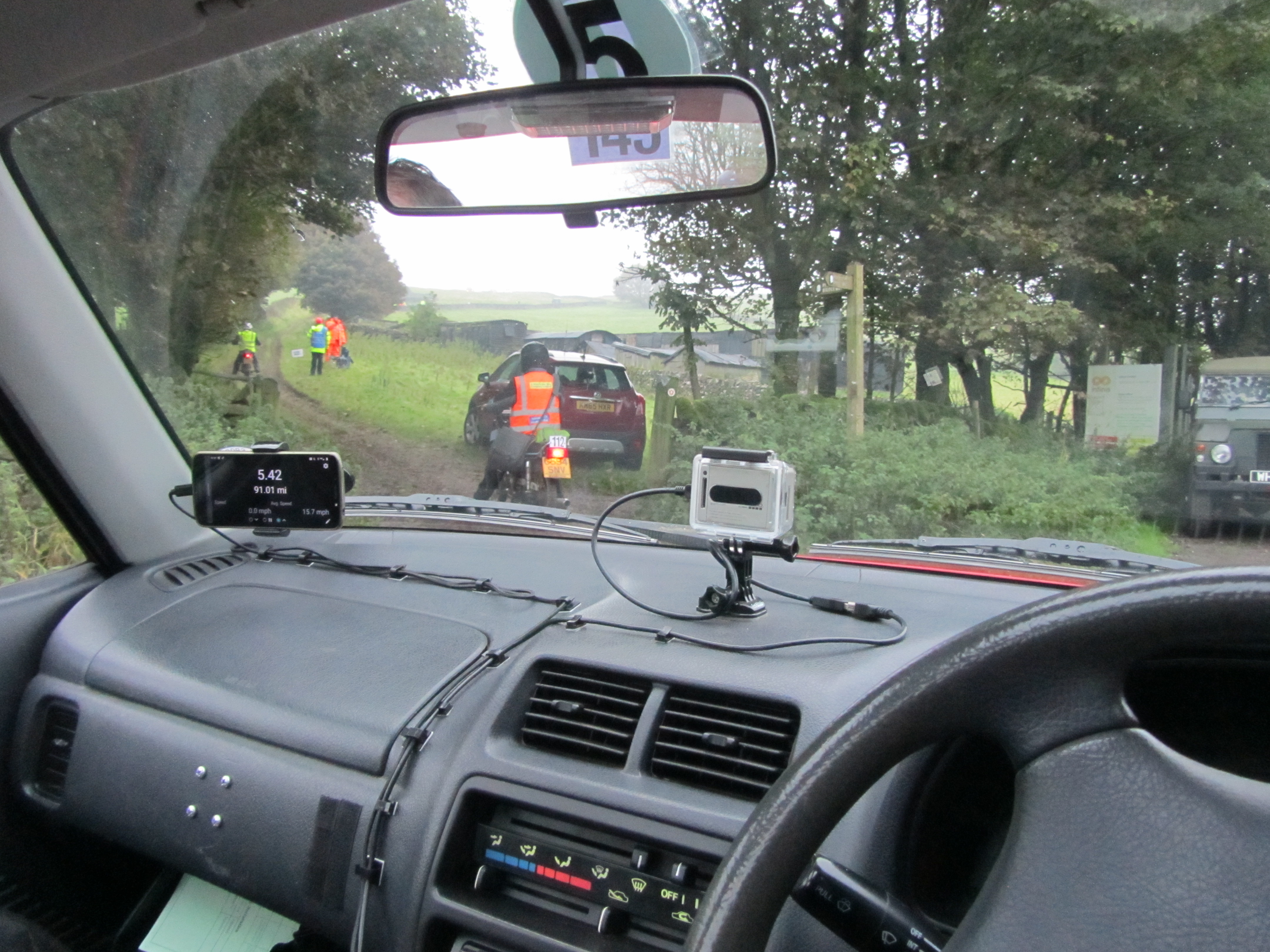 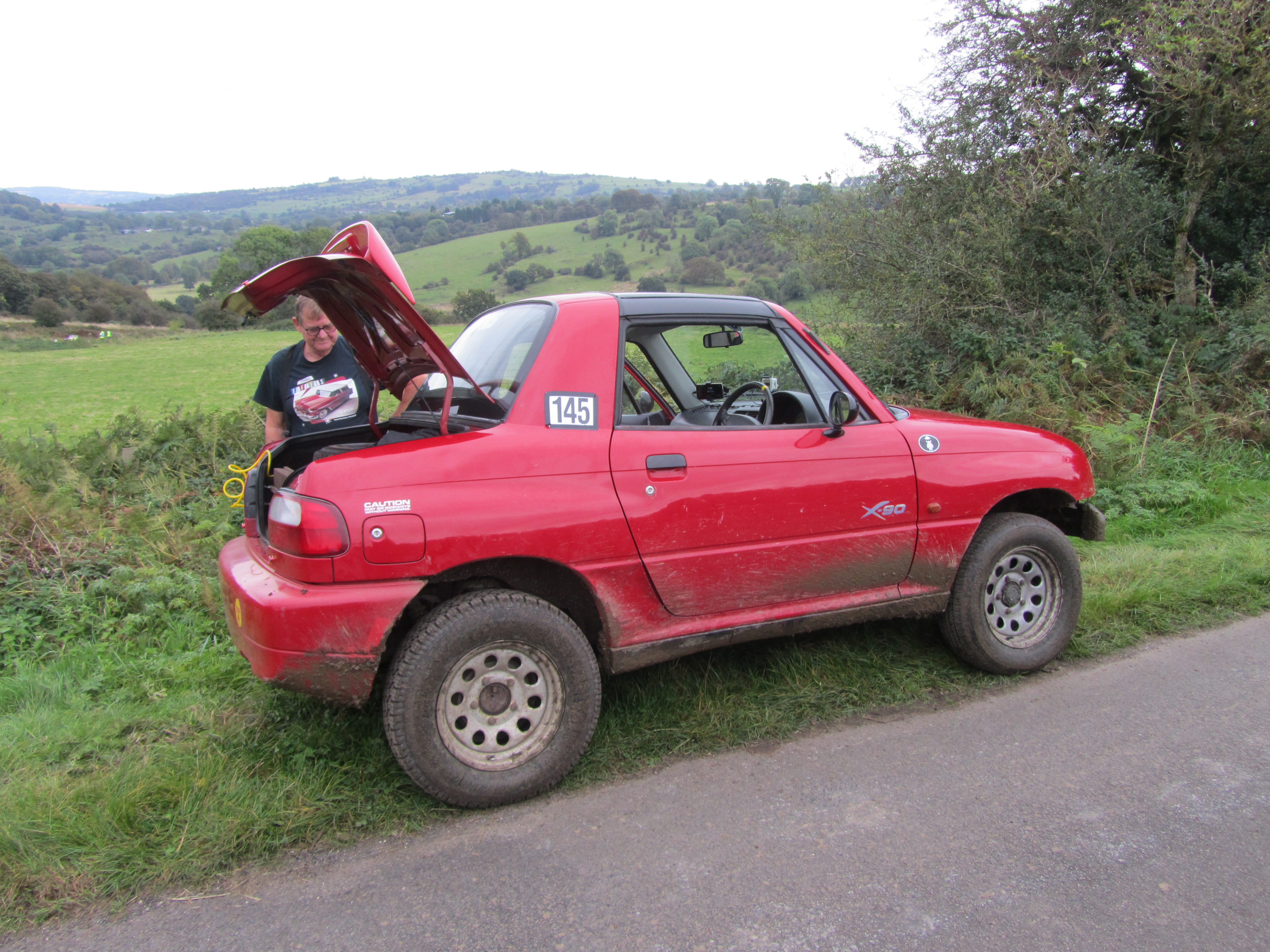 As usual, here's the mandatory video:

Still have this. Still trialling it:

Some improvements recently. Kept with the theme and did the wheels gold to match the Austin this winter.

I also went to the great expense of sourcing NOS front and rear bumper bars to replace the rotten rear and missing front. A lucky find on the owners club Facebook page and I grabbed a red bumper to mount on it as well. It now looks like it should again!

A few friends and I are going on a roadtrip around the NC500 in Scotland. I decided there was some delicious irony in taking "the worst car ever made" on some of the best roads in the country.

So I've given the car a polish. Set off tomorrow.

There is actually some logic. This is my best prepared car for long trips, as on an MCC trial I'll spend 24hrs+ in the hotseat, meaning it's already wired for phones, navigation, tyre pump, sorted for spares etc. It also has exceptionally comfortable seats.
Photobucket can sod themselves
'04 Fiesta '06 & '03 Mondeos '65 Anglia '29 Austin 7 '86 Fiesta '69 Corsair
'31 Rover Two Litre​
You must log in or register to reply here.
Share:
Facebook Twitter Reddit WhatsApp Email Share Link
Top