Thanks! It's getting there.

Today I put the tank back on, put a coat of underseal on the front fender and put it back together and back on the bike. I also changed a relay that had burned out causing my season to end prematurely and made sure the battery is in check. I made a seal for the tank cluster but I decided later on that I need to make a new one from a different material.

Originally I was about to make it two tone, but I opted against that. I also though about leaving the badges off but I think I'll put them back on at some point. I also thought about doing an offset pair or stripes on the tank top. From vinyl. But we'll see. 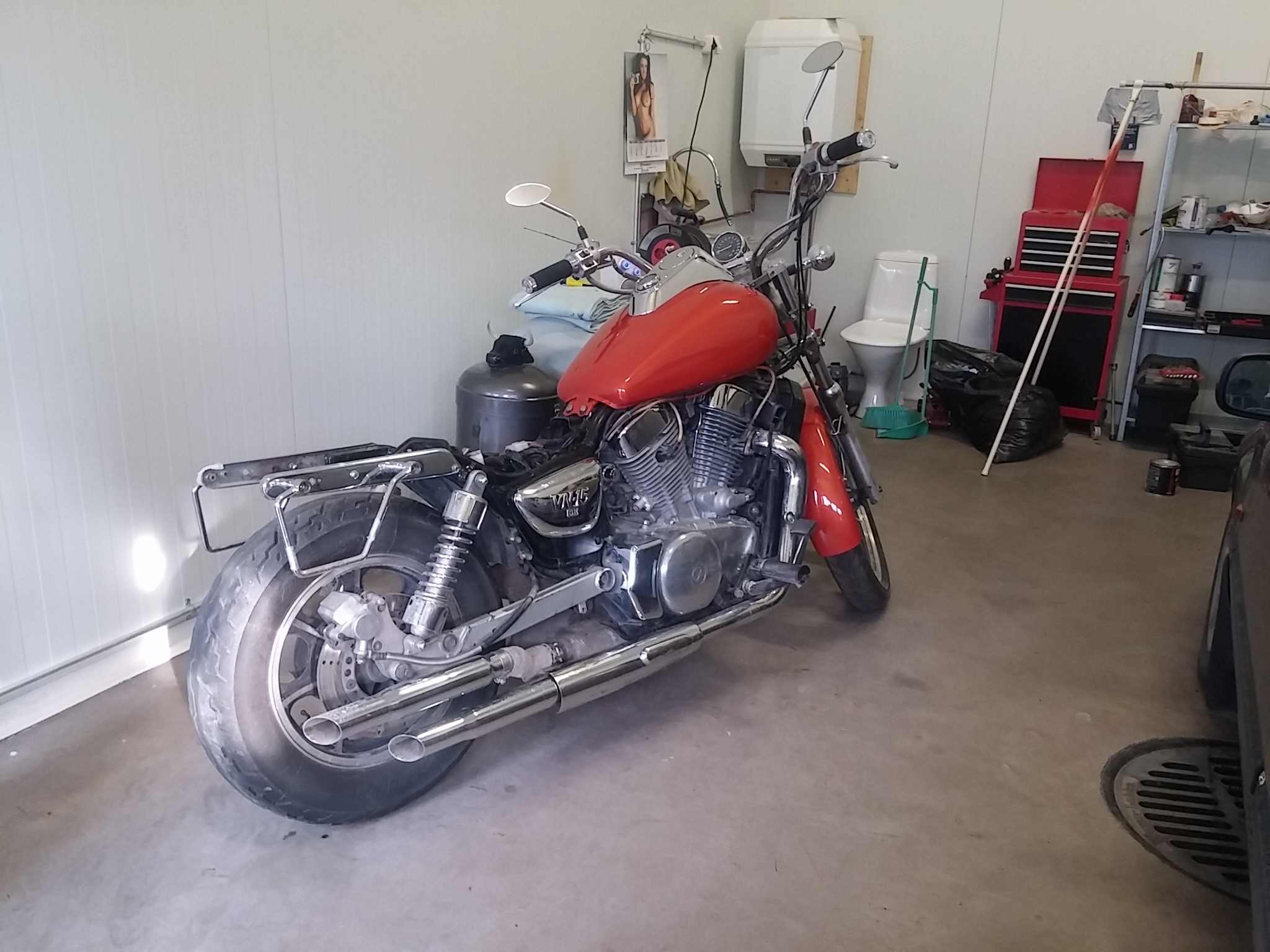 It runs! It's the first time it's running since it gave up the ghost last fall. And boy does it sound better with the new mufflers! I was surprised in how loud it ended up being. I suppose the middle muffler isn't rly a muffler.

Spent most of the day fixing little details, changed a wire that ran from the starter solenoid to the starter. The wire had a cut in the insulation. Had to remove a good deal to get at it but now it's better. The carbs are out of tune and the rear is still off the bike. I made a new seal around the tank gauge pod and attached the cables so that they're out of sight. The covers that go around the frame under the tank were bad so I left them out for now. I'll source better ones but these things aren't popular here so I might need to look for a while.
Have you ever noticed that anybody driving slower than you is an idiot, and anyone going faster than you is a maniac?

Today I fixed a leak I found in the fuel line, put on the rest of the intake/air filters(I hate these fiddly rubber parts in hard to reach places) and put the rear fender back together. I had it off so I can fiddle with the wiring if need be. good thing too because I decided to change them on both ends a bit. Simplify it a bit and I ended up tossing the HD wiring in the corner and make a new one. I'm fairly confident that all the DIY jobs the PO did are now gone for good. 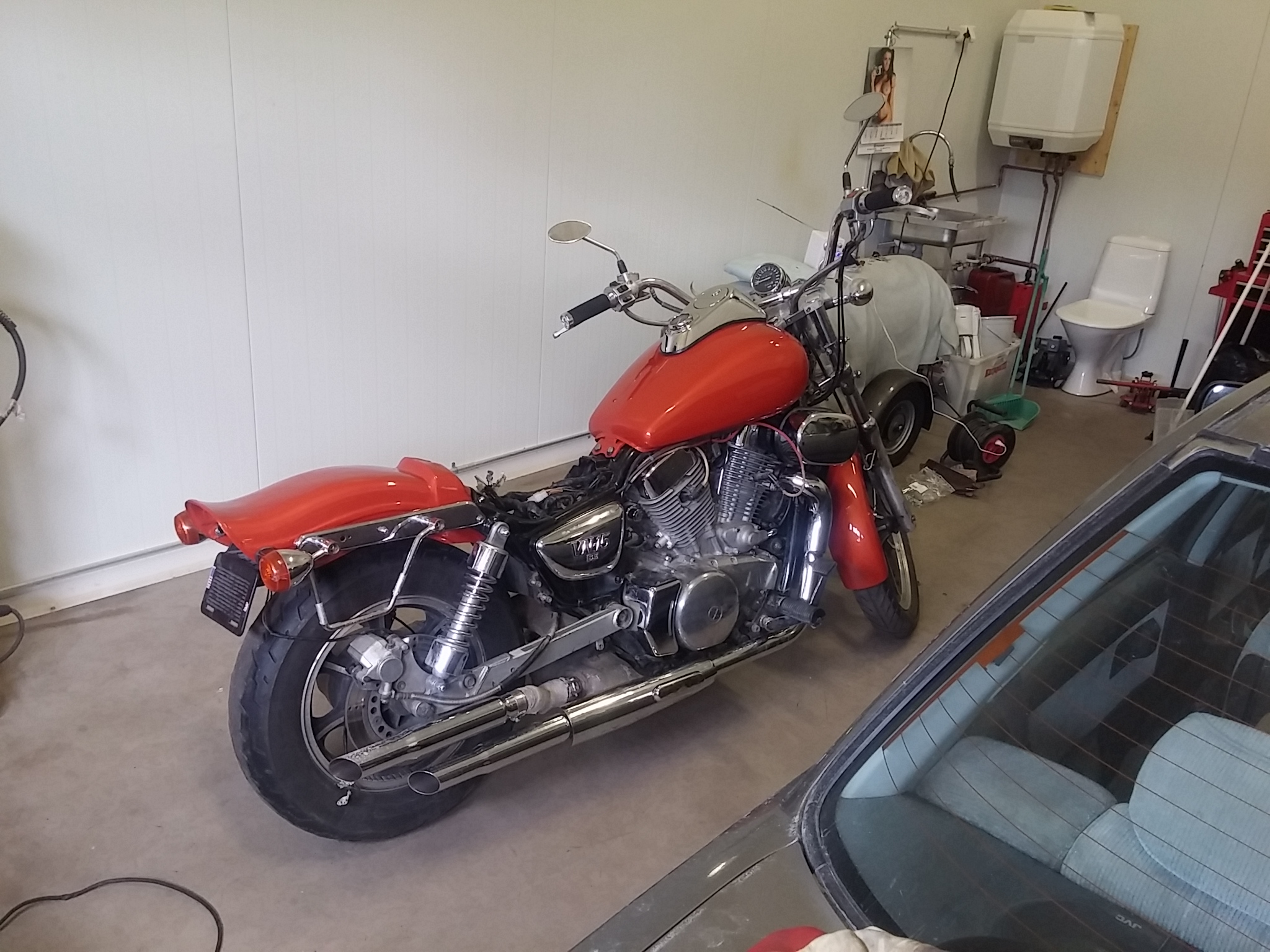 All together, done a test ride today. Seems to work fairly well, I still need to fiddle with the carb settings, put on my saddlebags and make a small panel to cover the hole for the rear seat while it's not on. I made it so that I can swap the rear rack for the rear seat. And properly wash it ofc. 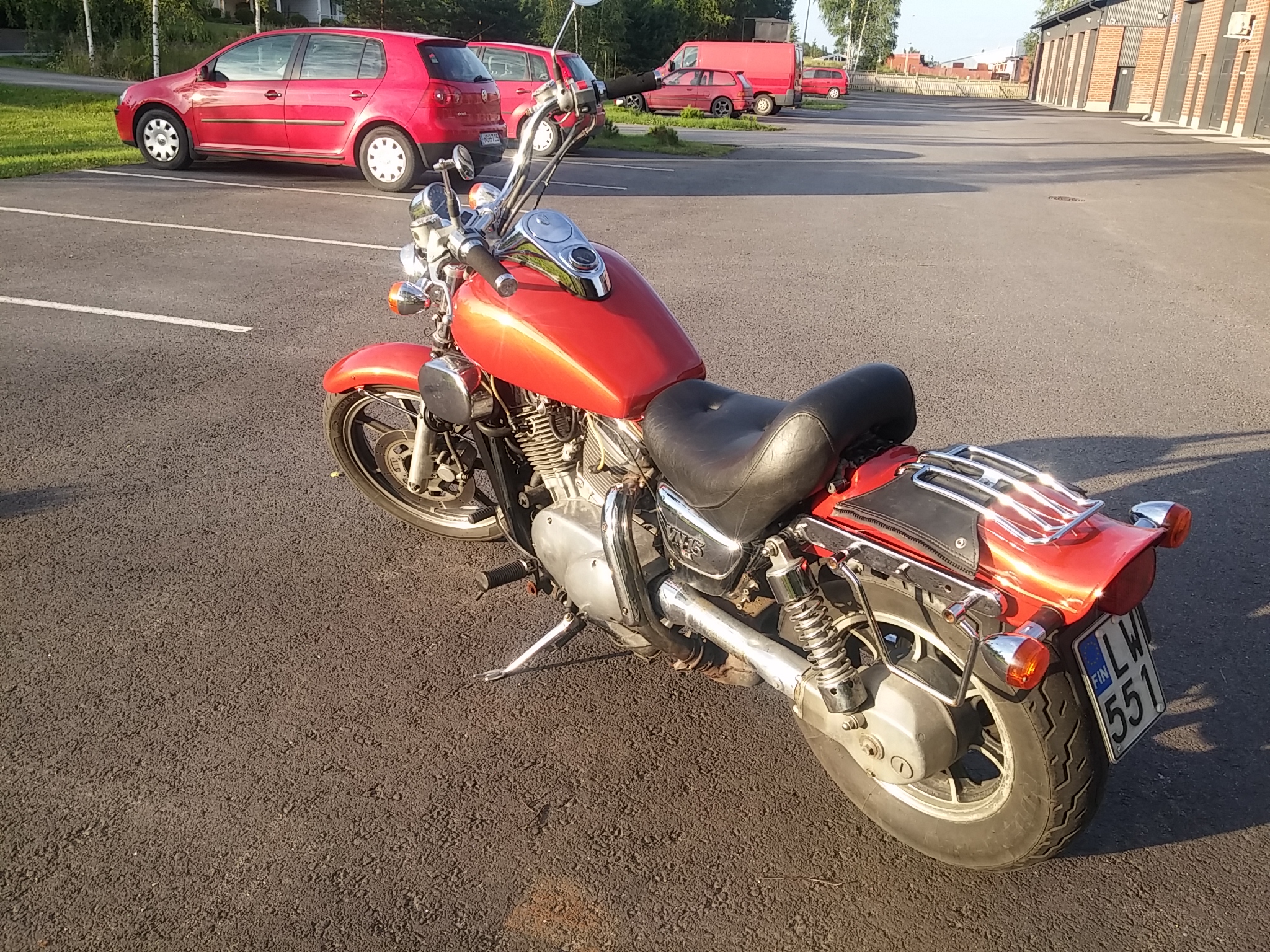 I put the saddlebags on the other day. I also fiddled with the carbs a bit. Better, but not good yet. I will have them synced by a friend next week(I'm not a carb person - I just about hate them). Everything seems to work and so far it's not on fire. I still need to make that cover behind the seat and modify a cover for the upper exhaust bend. I've also yet to wet sand and polish the paint. I wanted to wait a while because it has a lot of clear coat on it. 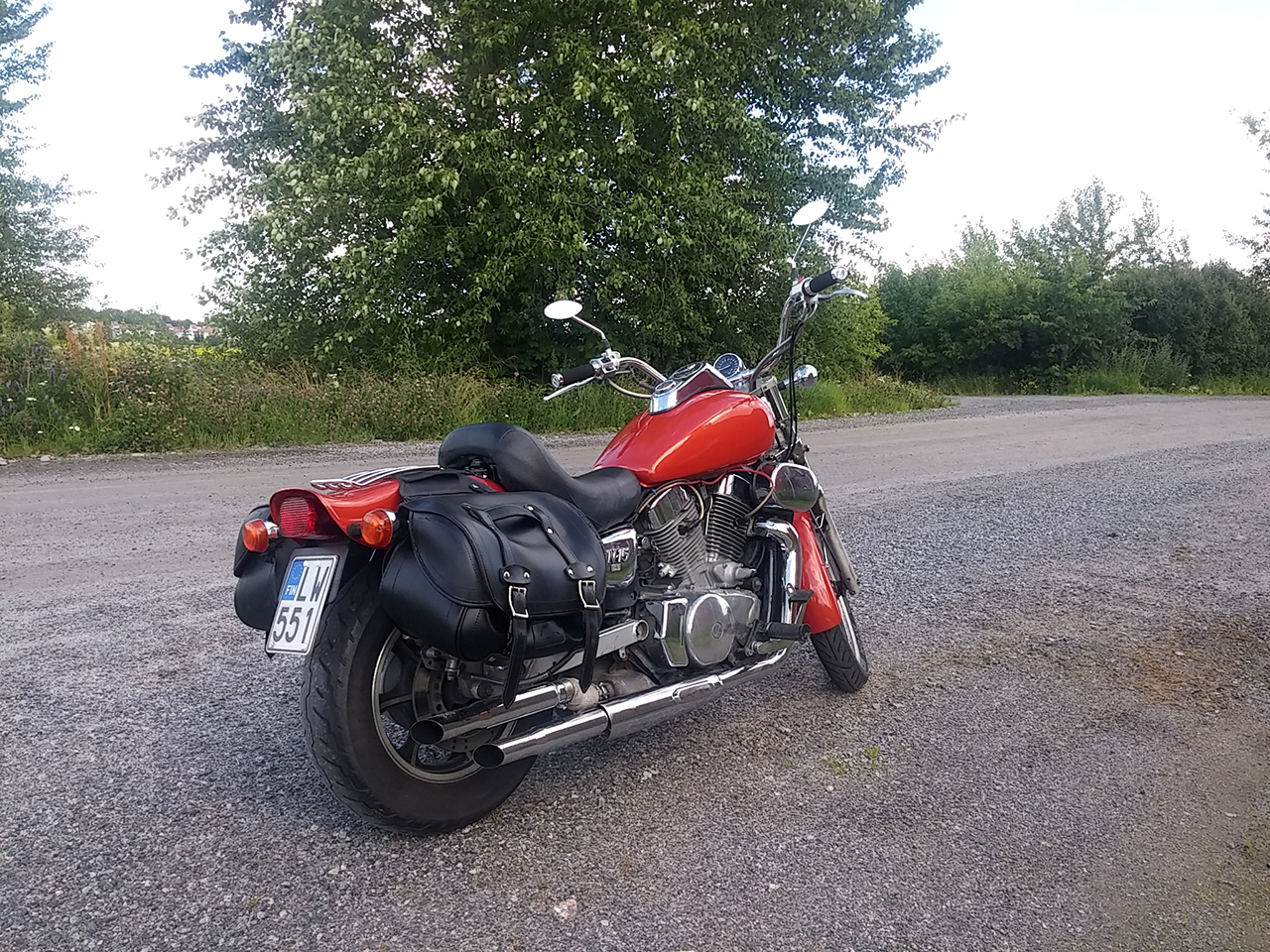 A few days ago I stopped by a friends garage and had the carbs synced. By the looks of it it's just a couple of vacuum gauges with some vacuum hoses coming out of them. Something I can make myself when I need them. I also polished up the paint today. The tank had a few mistakes in it that I wanted to get rid of. Last weekend I already tried a polishing paste on it(Farecla G3) and I found that it left a grayish film on everything and it didn't rly fix the little faults that were left in the clear coat. I also tried auto finesse iron out on the other parts of the bike. I'm very sold on this stuff, works like a dream! I cleaned up and polished up the parts of the engine I could with a reasonable amount of effort.

Today I fixed the little things that were left behind. The paint was wet sanded and then I moved on to Farecla again. I found that farecla needs to be washed away very well with something that gets rid of wax etc. to get that gray film out of it. After a good deal of rubbing, polishing and washing I moved on to meguiars ultimate compound to finish the polishing up. After this I gave it a coat of wax to protect it. 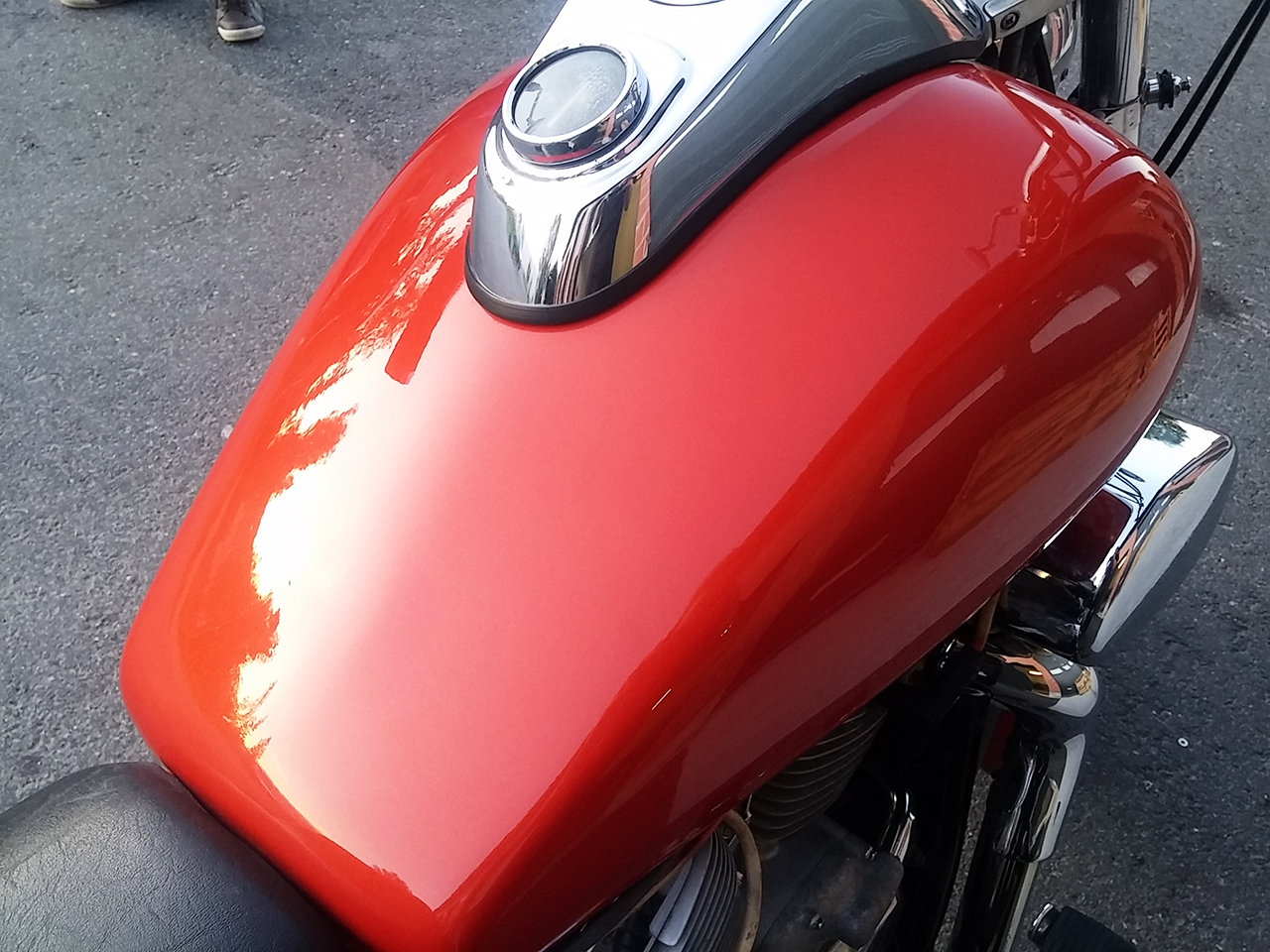 Thanks!
The color was a happy accident. I was surprised how much you can still do with the paint after you've done spraying it on. At first it was an odd feeling taking sandpaper to a fresh coat of paint.
Have you ever noticed that anybody driving slower than you is an idiot, and anyone going faster than you is a maniac?

That is a nice job! And the colour is really awesome

Thanks! I'm very pleased in how it turned out. I got to start the season very late this year. But having the bike more like I want it and reliable(knock on wood) more than makes up for it.


Here's a quick shot I took while I pulled over cruising to my friends place today. Nothing like a nice summer ride on a sunny sunday. 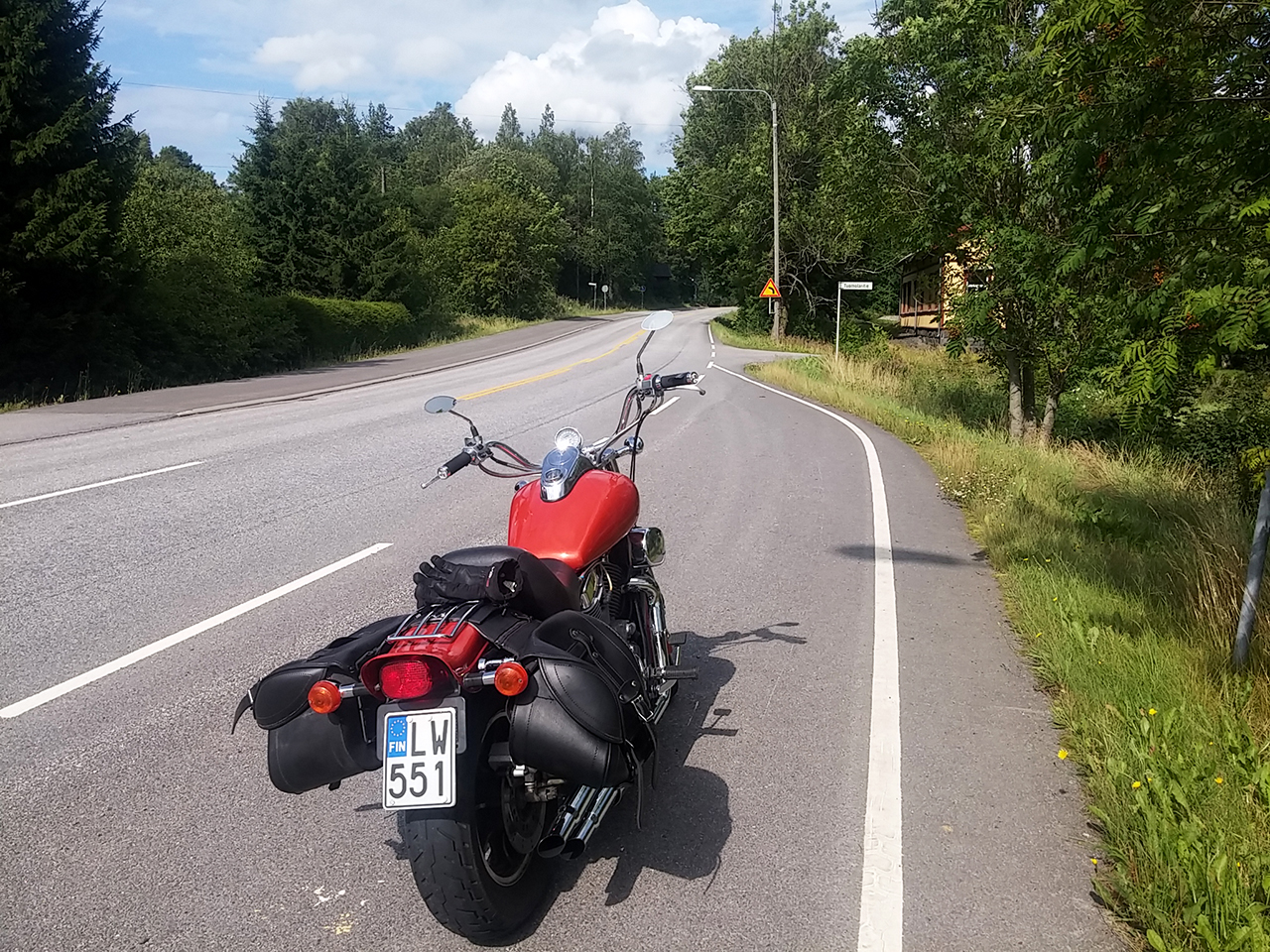 Well that didn't take long for something to break!
Though it was nothing serious. The turn signal relay gave up the ghost. While I had someone ask for it while conveniently visiting a kawa dealer. They once again told him that my motorcycle does not exist and if it did there surely is no turn signal relay for it. He called me, I suspected that any 2-connector relay would work and asked a customer of ours while I was out on company business. I was right- very common in the past and as a result very cheap. 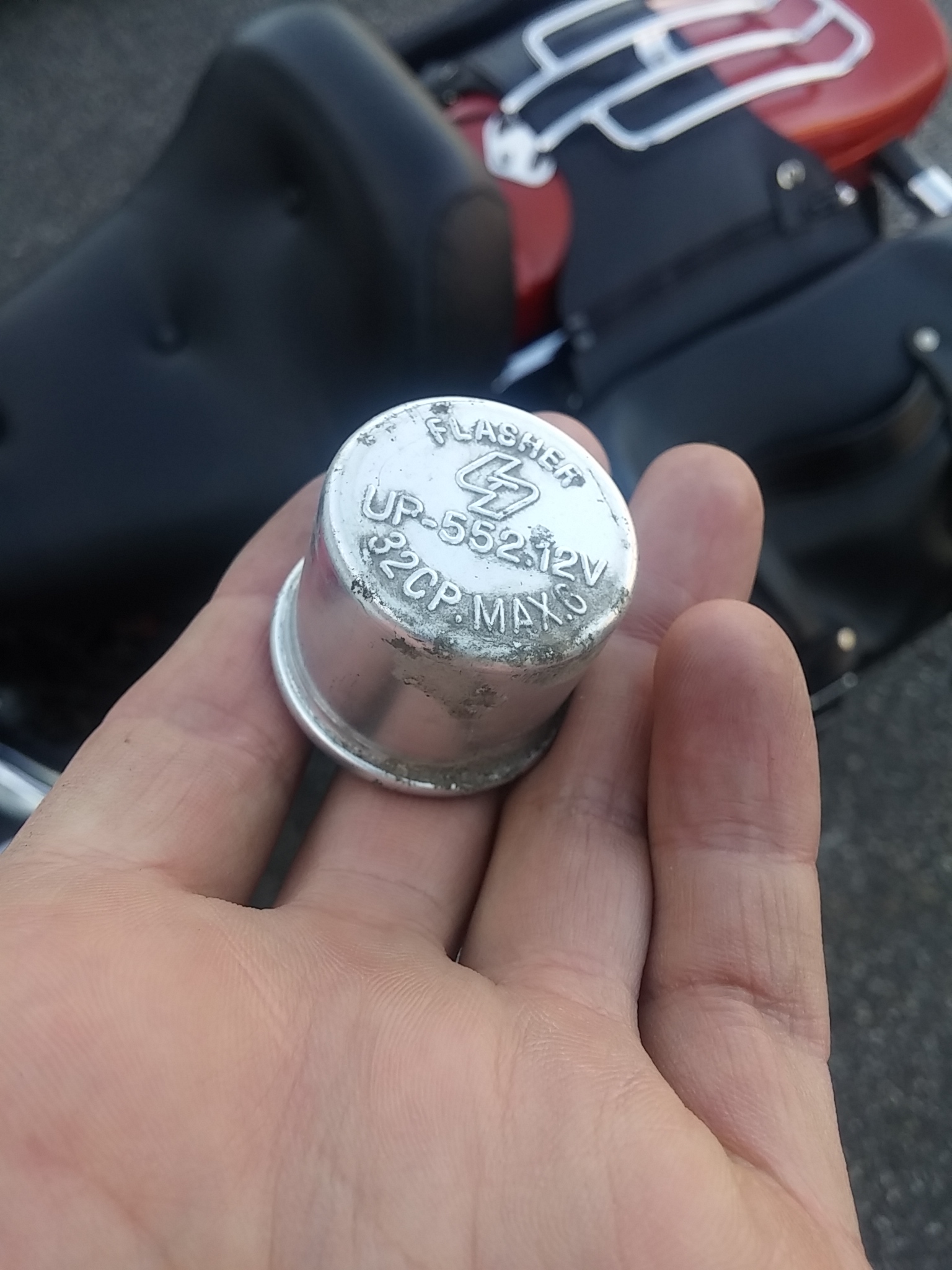 Right. Season nearly over. Time to think about next winter.

I need a new rear tire. This one is just about had it. I also need to take the front apart and give it a service. I also plan on getting some more color on the tank. Going to look in to how vinyl would work. Could be a bad idea I don't know until I try it. I might put the emblems back on the tank. I also plan on going over the last parts of old wiring still left untouched. Most of that is under the tank. I might also look in to changing the clutch.


A shot I took on my way home from work. Probably one of the last times this season. 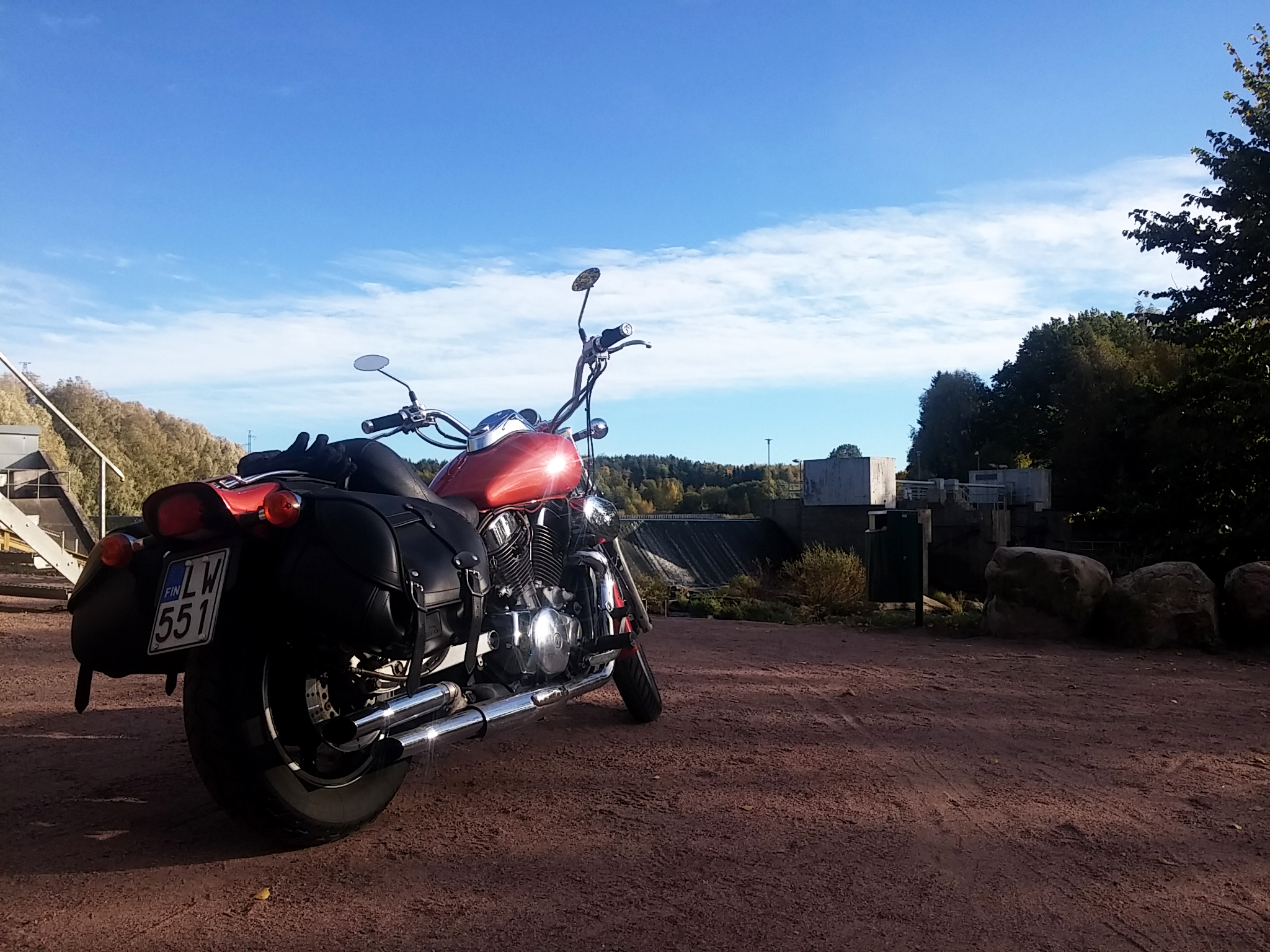 A shot I took while I was on a Saturday ride

Looking good man, enjoy the weather while it lasts.

Vinyl wrapping something like a gas tank yourself can be a bitch. I'd call some shops first and see what they quote you.
Saying smaller engines are better is like saying you don't want huge muscles because you wouldn't fit through the door. So what? You can bench 500. Fuck doors. - MadCat360

Thanks. I plan to. Though it was around - 8c in the mornings last week. So going to work migh not be an option as often as I like.

As to the vinyl, I plan on something subtle. Like an offset "go faster" stripe. I'll ask a vinyl shop that has done a lot of work for a number of friends of mine. I'll take the tank over when it's off the bike.
Have you ever noticed that anybody driving slower than you is an idiot, and anyone going faster than you is a maniac?

Well season over. She's been sitting in a new garage for a few weeks now. Looking at the weather it looks like riding is rly over for the season and I'll take it apart again this weekend.

Well I stopped by a vinyl shop I know ppl use. Got nowhere because we didn't rly understand each other. I nearly ended up with adidas stripes on my tank. Looking at other options.


Also, while the wiring we did worked well, we left the part under the tank alone because it looked factory. Well It wasn't and late in the season I had some issues with my turn signals. I diagnosed the problem to the wiring under the tank. The part we should have looked at but didn't. Well it's now hanging free and ready to be redone. 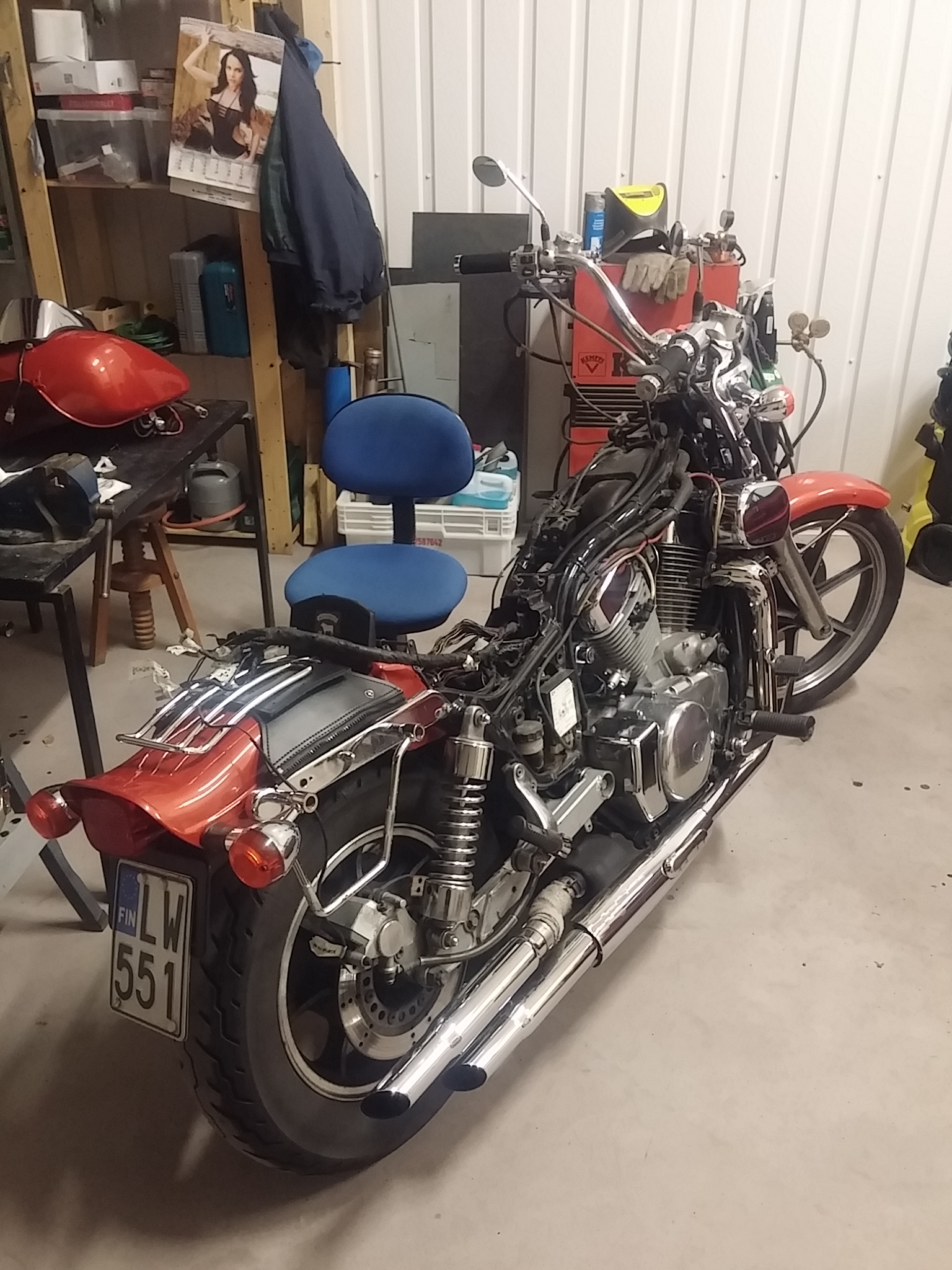 The troublesome bit. The problem is about half way up the wiring. 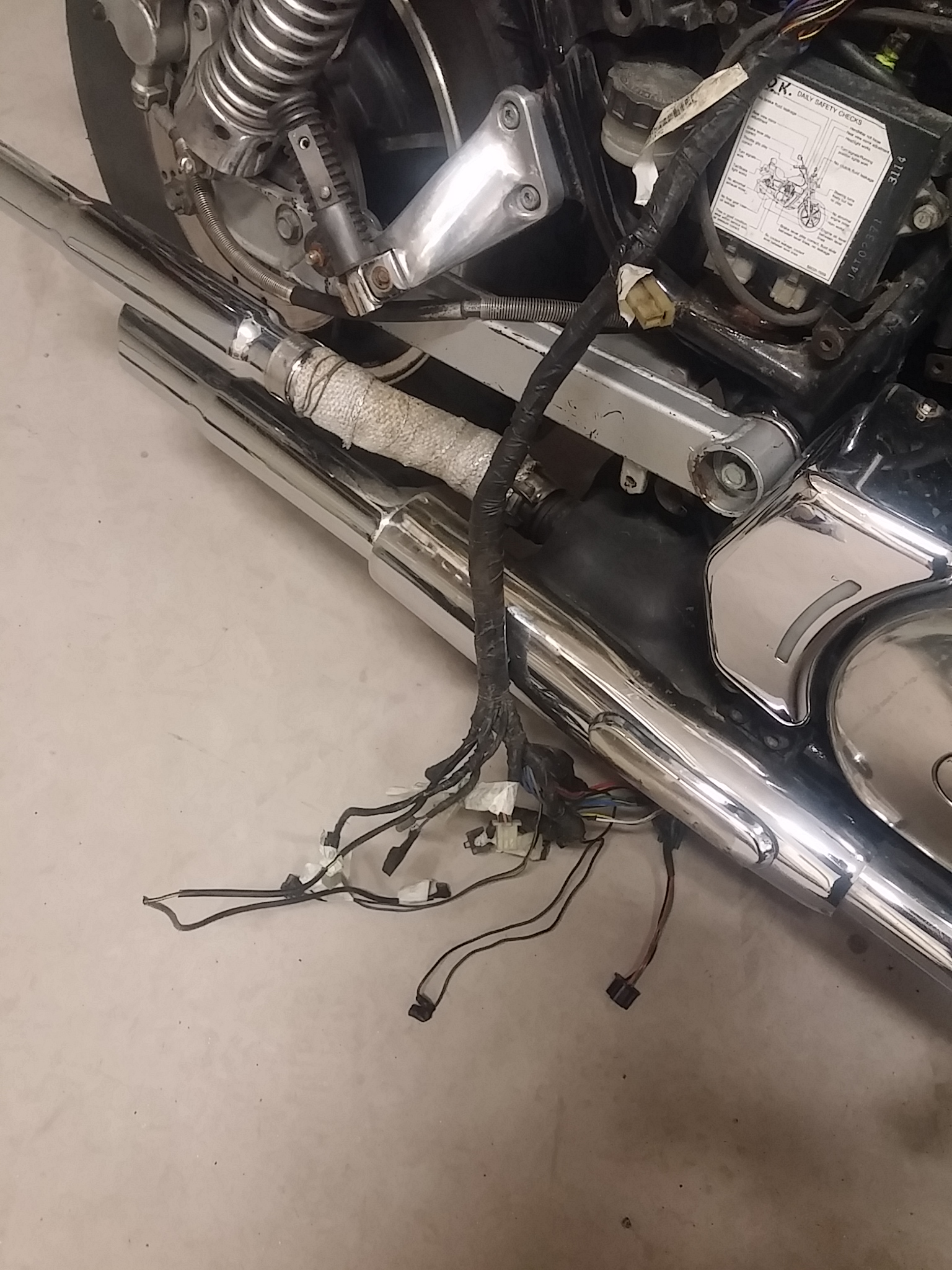 Things happened at last. I found a guy who can do some pin striping on the tank. Also, took care of the wiring at last. Problems have been solved. Wiring is all done with the exception of the foot brake switch. Fixed it today. Wiring it up later. I also need a replacement turn signal switch. Mine is worn and causes intermittent failure. 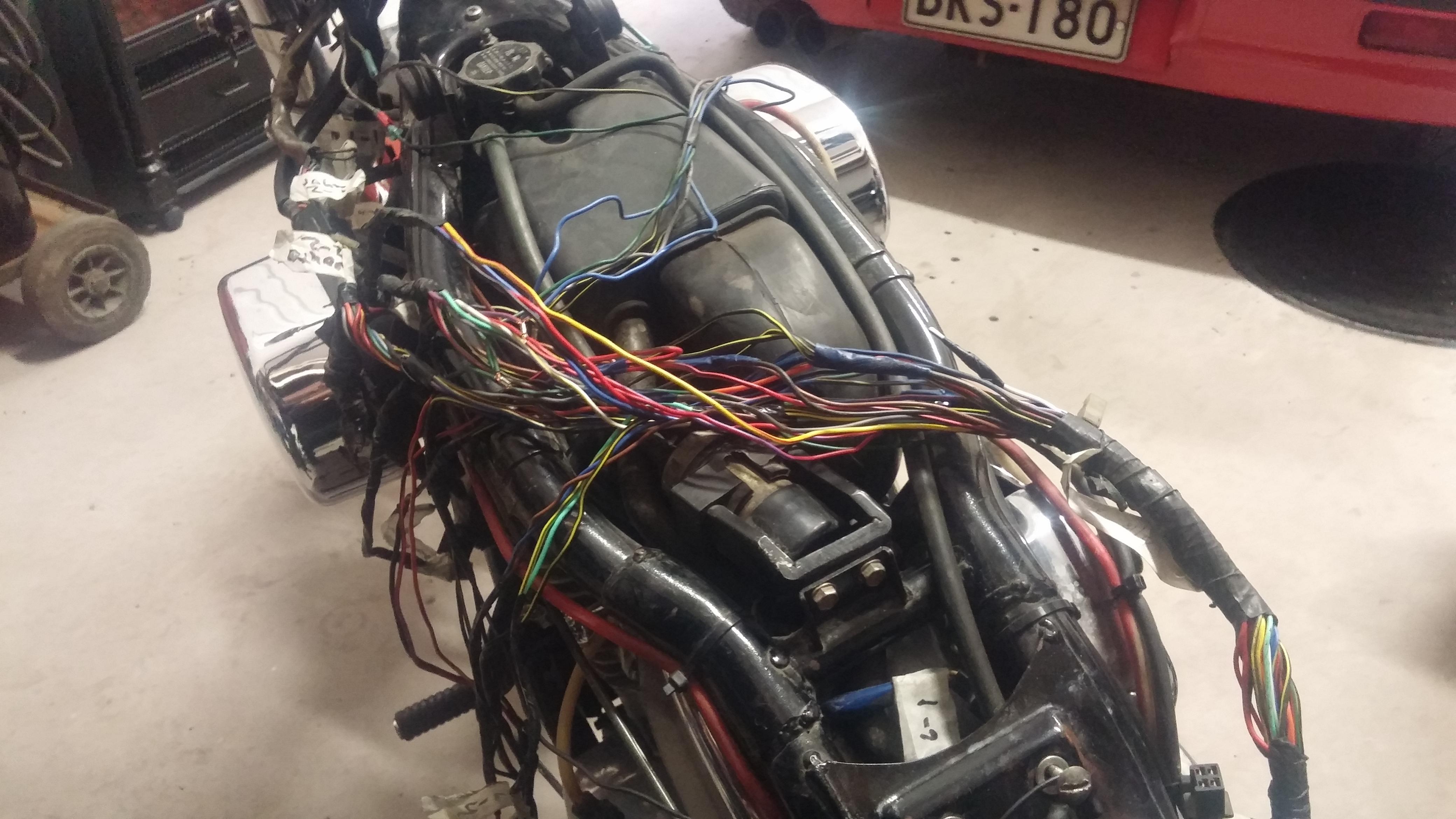 Fixed, wrapped and hooked up: 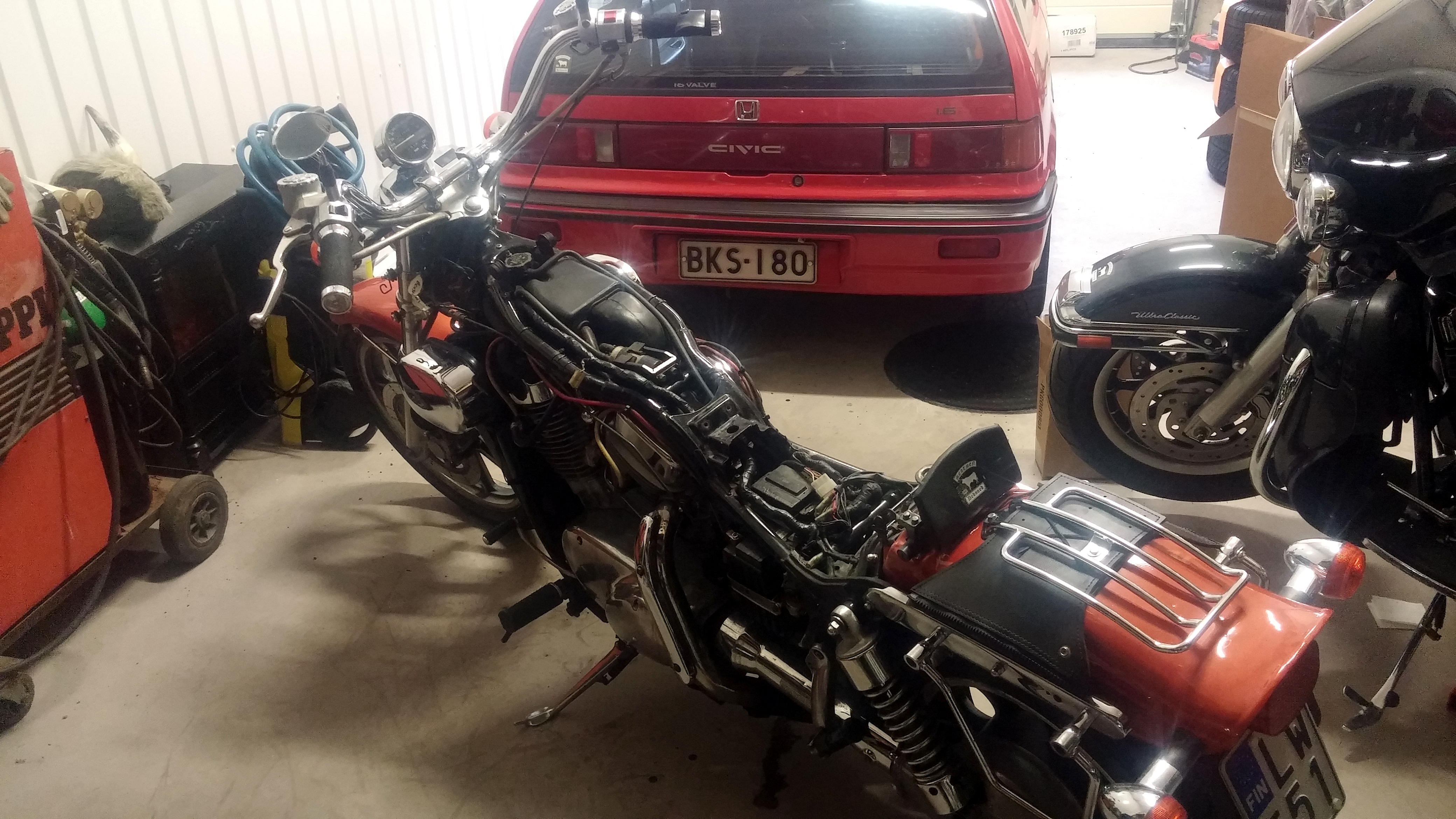 Oh, and an other thing I've forgotten to mention. I need a seal of some kind between the piece on the left and the fuel tap. that sucker popped out a coupled of times last fall causing some buttock clenching action while a wild fuel hose was waving around between my leg and the hot engine. 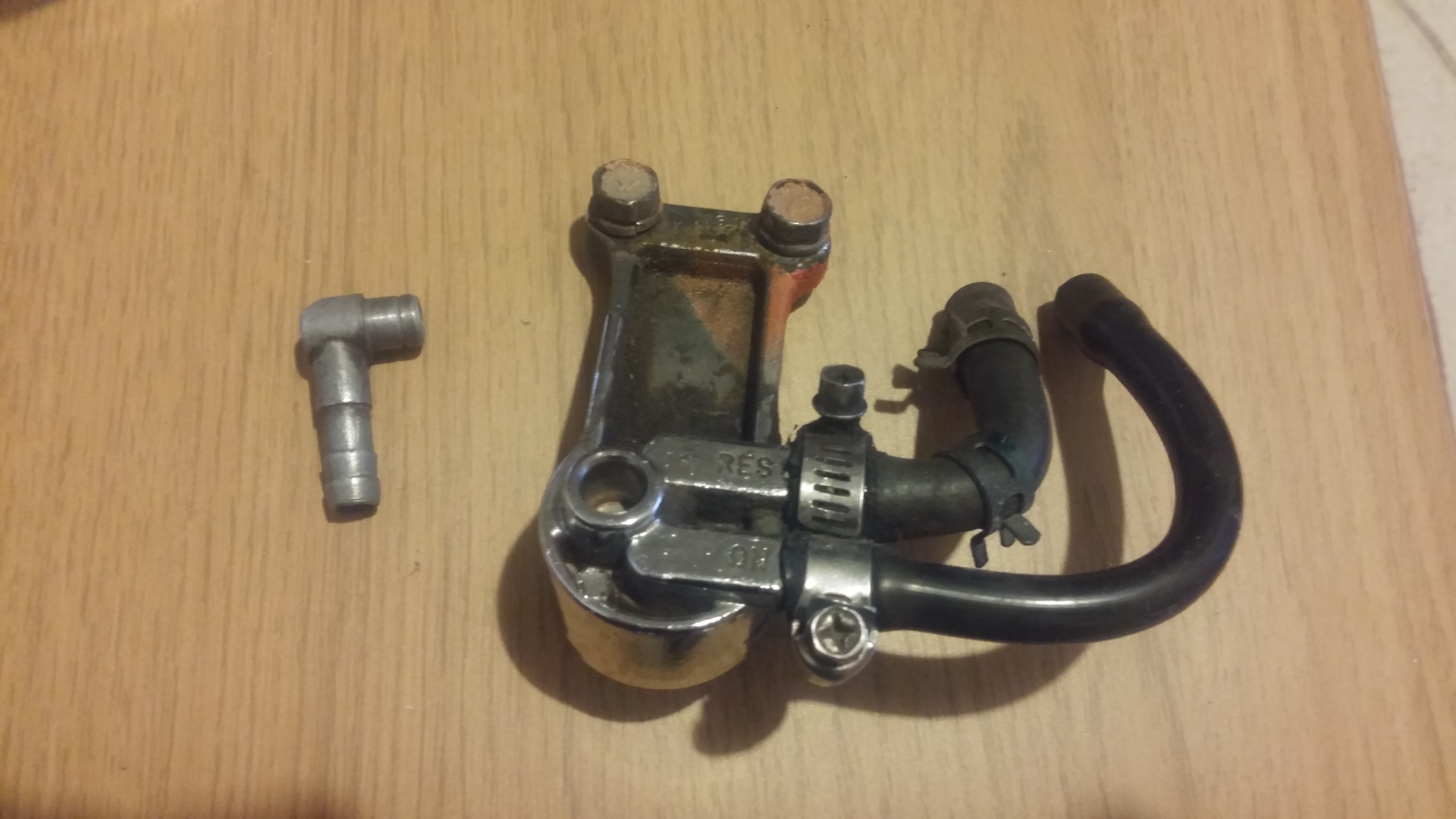 I saw someone in vulcan owners group brag about how reliable and well built these things are... I was half tempted to say something but I didn't. It's not the bikes fault the PO was ham fisted and that things wear out.
Last edited: Mar 29, 2016
Have you ever noticed that anybody driving slower than you is an idiot, and anyone going faster than you is a maniac?
You must log in or register to reply here.
Share:
Facebook Twitter Reddit WhatsApp Email Share Link
Top