I had a problem with the engine starting to overheat after 3 or 4 laps last summer when it was very hot. I diagnosed that the radiator(original from '88) is so clogged that air just can't pass through it properly. There is a palm sized patch where air can still pass through. So now before the summer kicks in I took this from work. Aluminum core, should even save a few kilos over the original copper cored radiator.

Swapped the radiator. This is what came out of it. Even when you seem to have room to play with, but in reality you don't rly have that much.

I did this a few days ago.
Does work, worth the trouble. Anyone thinking of this should do this when the manifold is off the car.

It's some fancy ceramic header wrap I got a while back, or at least that's what they sold me.
Next I'm gonna modify the air intake from a short ram intake to a proper cold air intake. My intake temps have been way too high.
Last edited: Jul 23, 2012

There are 2 of them in fact.

Small update. I managed to fix an irregular idle problem I had. I also changed the air intake from a short ram intake to a cold air intake. I had high i take temperatures in the past. Now it's better. No more sucking in hot air from the engine bay.

Again, a small update posted late.
I've had some small issues and the weather has sucked so the hb has been sitting for the better part of a month now. I'm gonna take it off the road any day now and I've got a good list of things to do over the winter. Head has to come off, rear shocks need replacing, exhaust needs new mounts and the heater knob broke.

I had the sedan inspected recently and that took some parts and welding. Damn it.

Update. I've done next to nothing. Mostly because where it sits(for now) you're forbidden to work on yor car. Storage only. So far I've managed to get away with little things. But the suspension work and peeking under the head is out of the question. I've also had the worst lack of motivation ever.

Lucky for me, I've managed to get a proper garage(thanks to my dad, who needs a place for his '06 ultra classic). It's cheaper than my current spot too! It'll mean that I'll be spending lots of time there once we get the place empty and ready for our things. I was going to drive the car over in a few weeks.
Last edited: Apr 10, 2013

Spring tuneup time. I had a feeling I had an issue with the head gasket based on a few subtle clues. Some corners had to be cut(due to certain parts not being available at the time) when we put the head back on some time ago. I was right. I'll make sure the head is straight and I'll drop it back in the car. 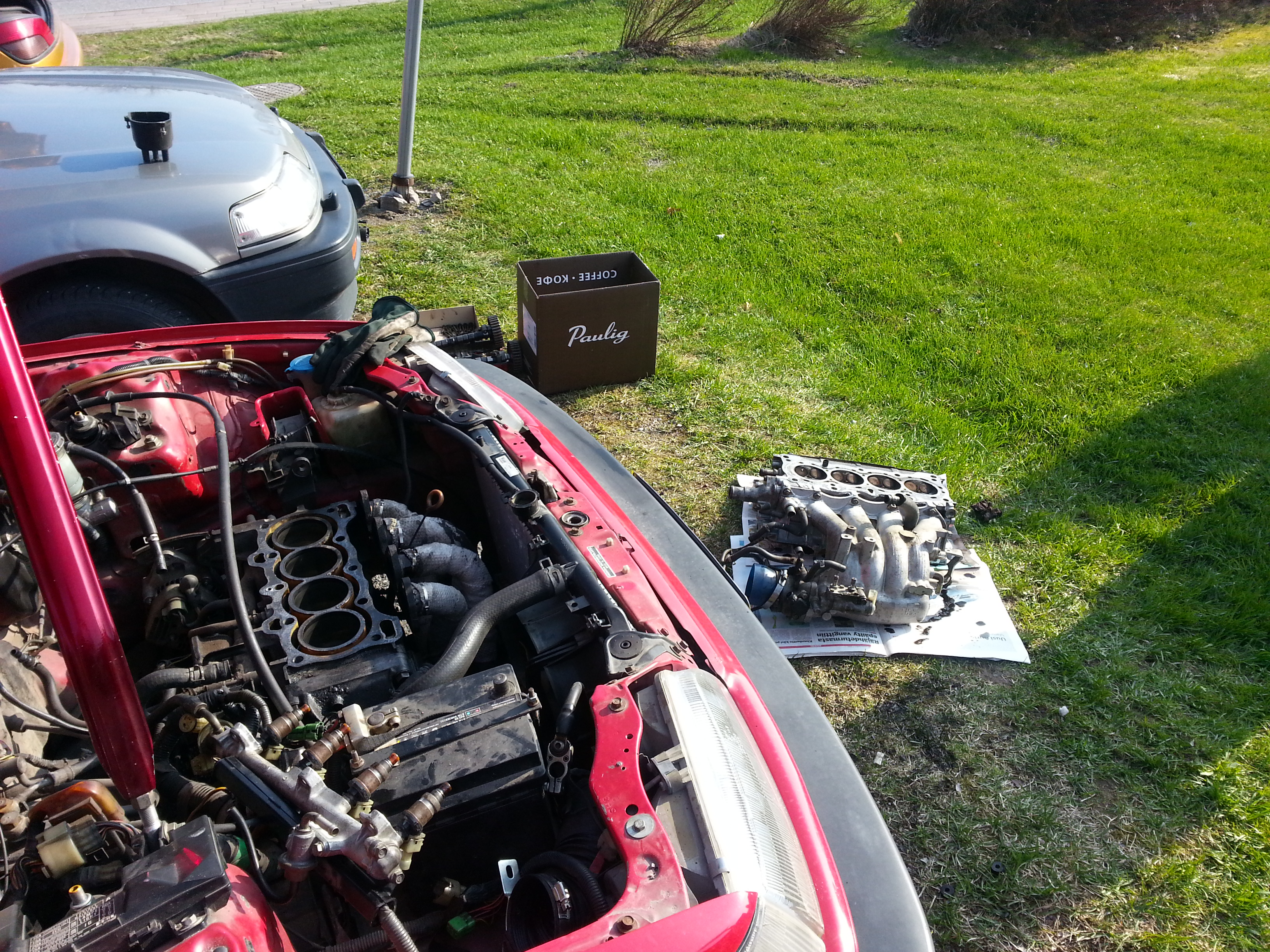 Time for an update. Been lazy to get stuff done and even worse updating this thread.
Since the last post I've moved in to a nice private garage close to home. It's for my vehicles and one HD ultra classic.

The new place. Having just moved in. 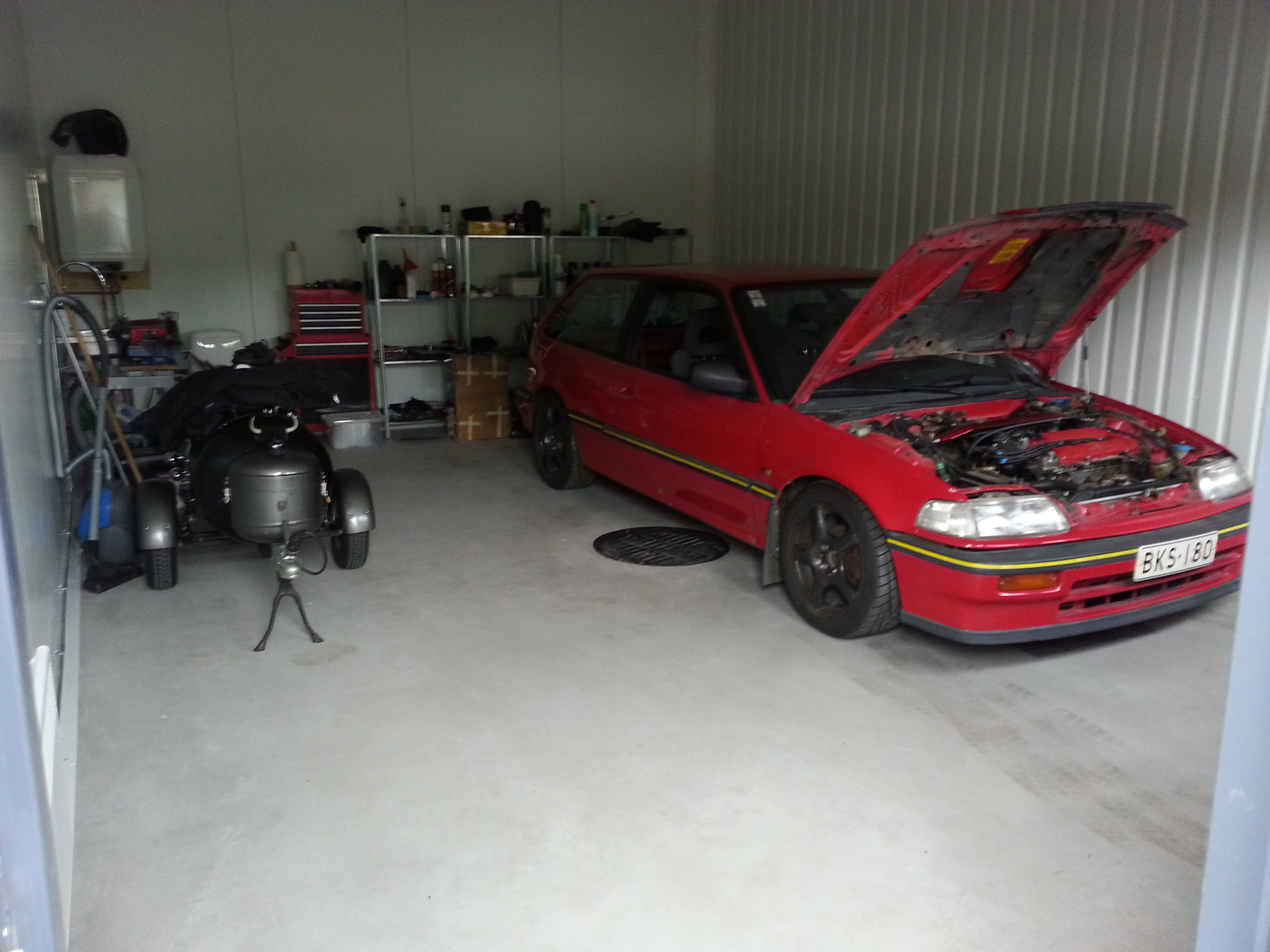 The hatch runs normal now with a new headgasket. The head was straight and nothing else was broken.
I started a rear suspension upgrade. New shocks(that I've had waiting for the old rear bilsteins to die) and newer type rear control arms. Even if they're not OEM. Some easy to get tuner part I got from NL. 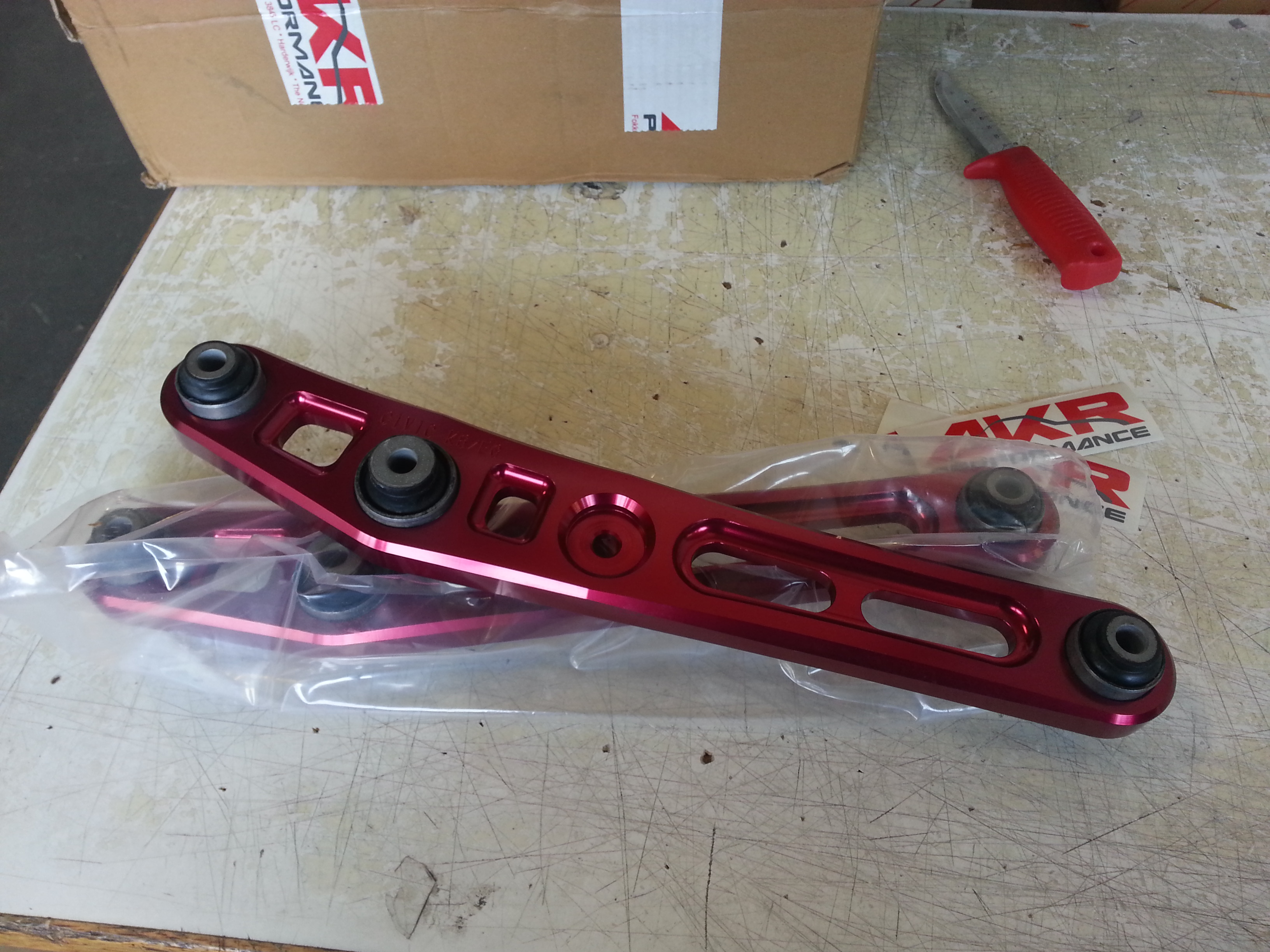 New shocks vs old. The new ones are koni adjustables. 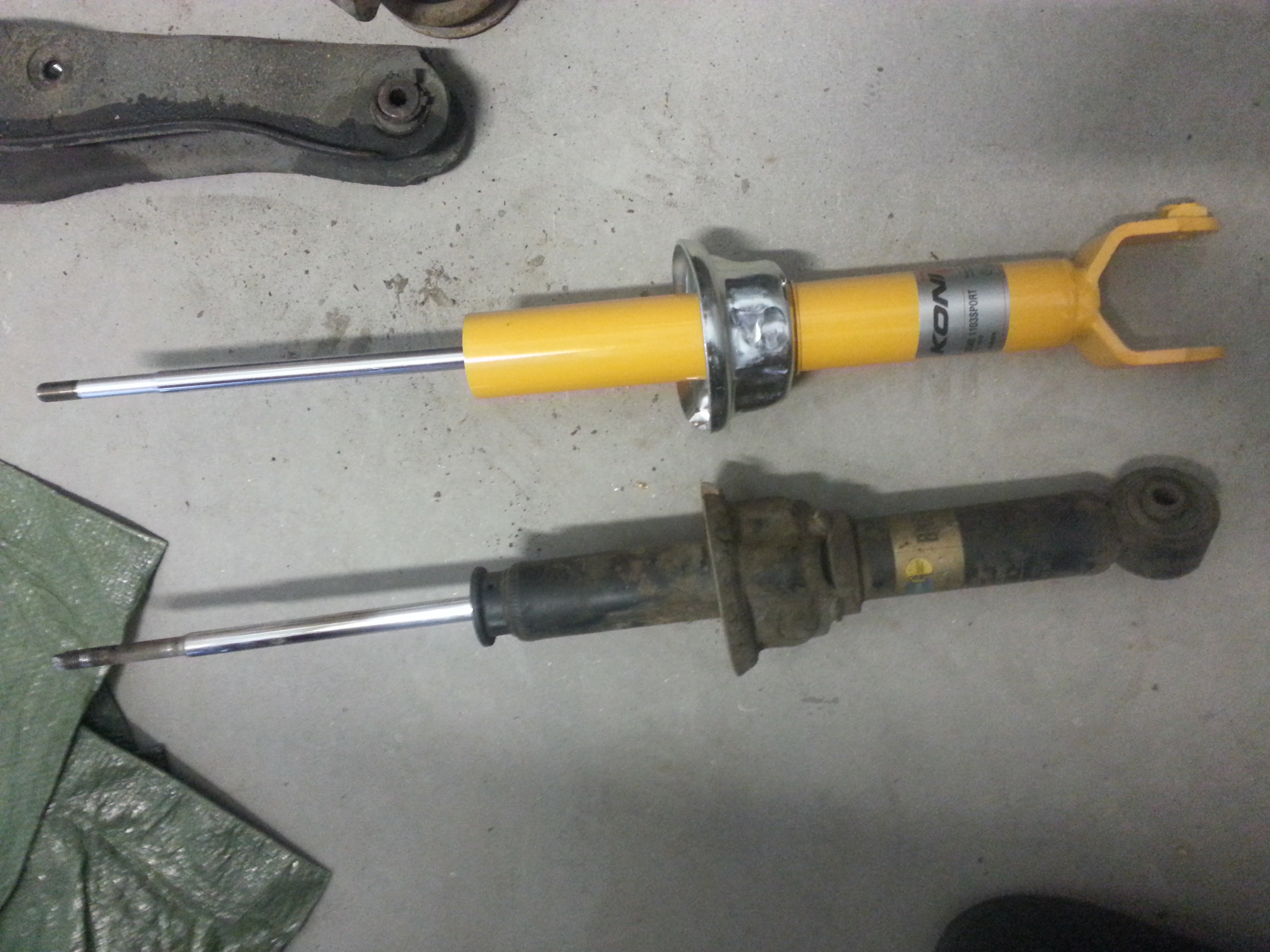 The biggest issue I had was when a bolt snapped. It has probably been there for the better part of the last 25 years. It took me as long as it takes to dismantle the whole suspension front and back to get that out without doing damage to parts I still need. Funny that the bushings that were hidden were still fairly tight since they were absolutely destroyed. 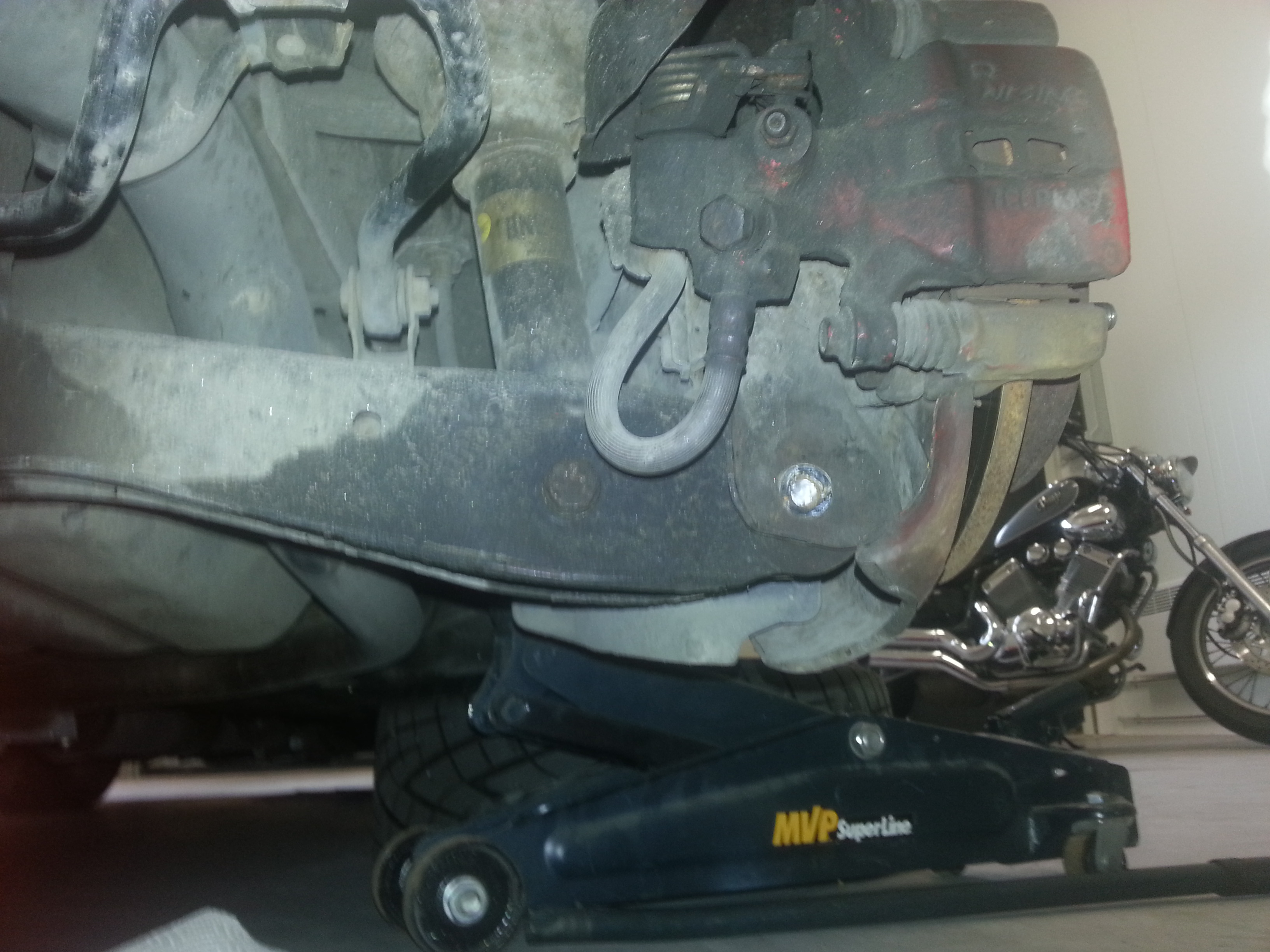 So it was about time you took it all out and replaced some stuff.

Heh yeah.
The shocks can and have been replaced without removing the lower control arm completely. Only 10 years and 100k km ago.

Never noticed this car on the forum, possibly my favorite generation of the civic. Do you have a better picture of the current air filter? From the one pic I can see it looks similar to the one i have on the e-max.

I've liked this generation so much I've had them for the past ten years.

The picture from the drivers side is as close as I've got to that filter. The intake pipe is an old tuner part I picked up years ago for my first sedan. The filter is a standard closed cone filter with a pipe running from it to the front of the car(though it's off now since I'm planning on moving the filter away from the engine bay). Most aftermarket places have a version of it on sale. Some of them better some of them worse.
Last edited: Sep 25, 2013

Getting my sedan past inspection sort of took most of the time I had to work in the garage lately, but at least it's legal now.

So the suspension has been under the car for a while, but I had an issue with the sway bar being too far away from the new control arm to connect to it. The old control arm was twice as thick as the new ones are, I had to sort out something. Last week I got(as in had them made by someone I know) brass fittings made so I can hook up the sway bar.

brass fitting(one for each side) 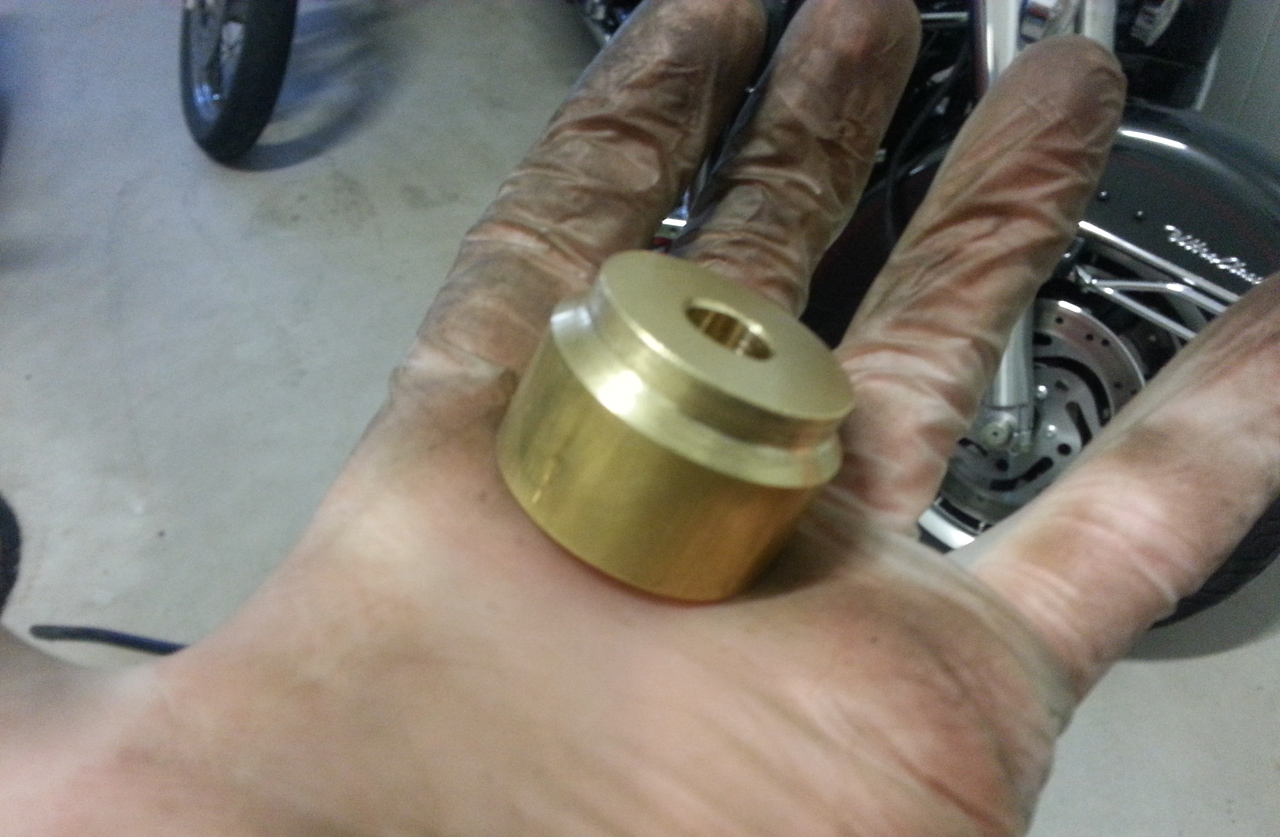 New stuff under the car...that old undercoating is looking nasty. I should renew it. Or remove it. 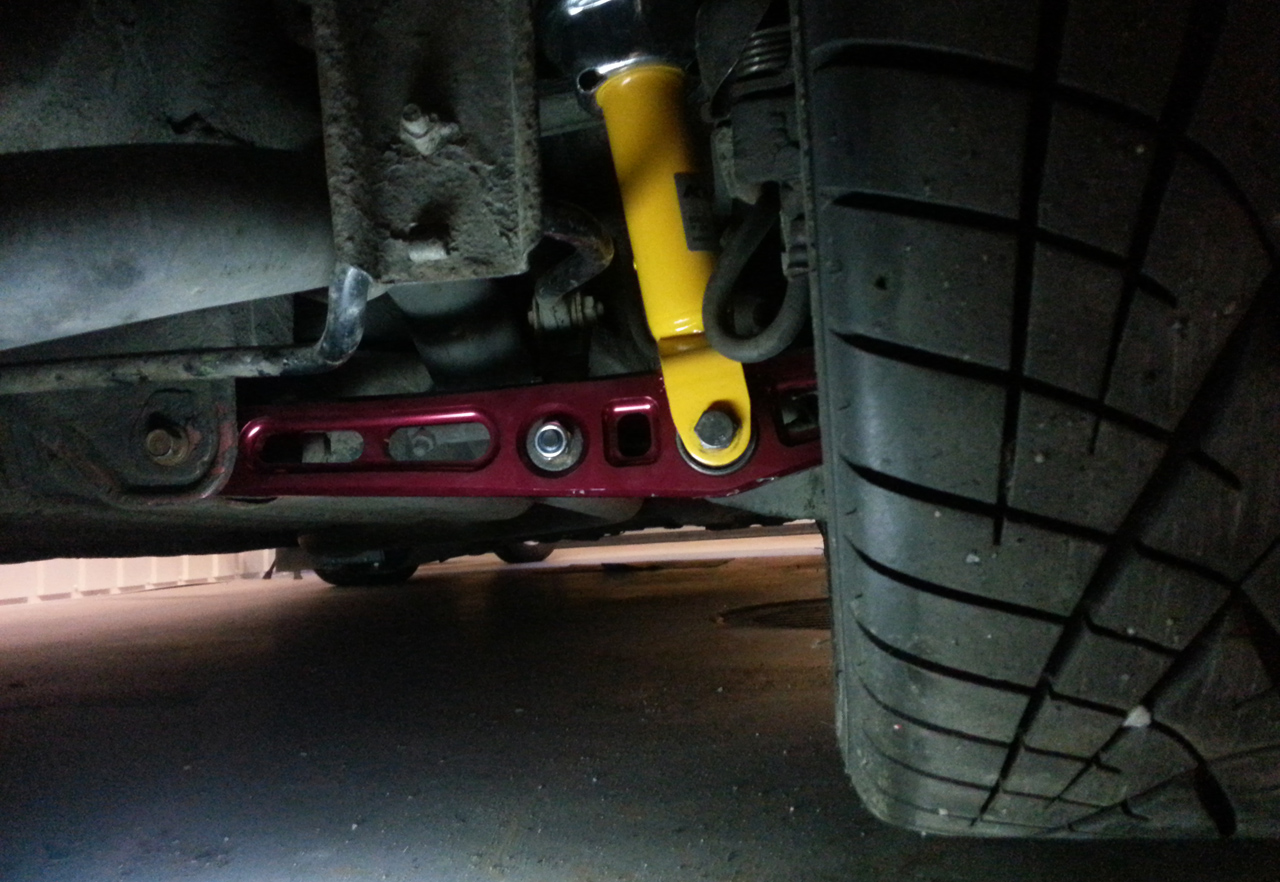 UPS delivered some goods today! Stainless steel braided brake lines all round. I had to swap one and finding rubber ones is getting harder so I ordered better ones all round. I'll try to get all of them in the car and bleed the system next weekend. I still need to button some small things up and then it's time this old girl tries to get back on the road after a good year or so off it. 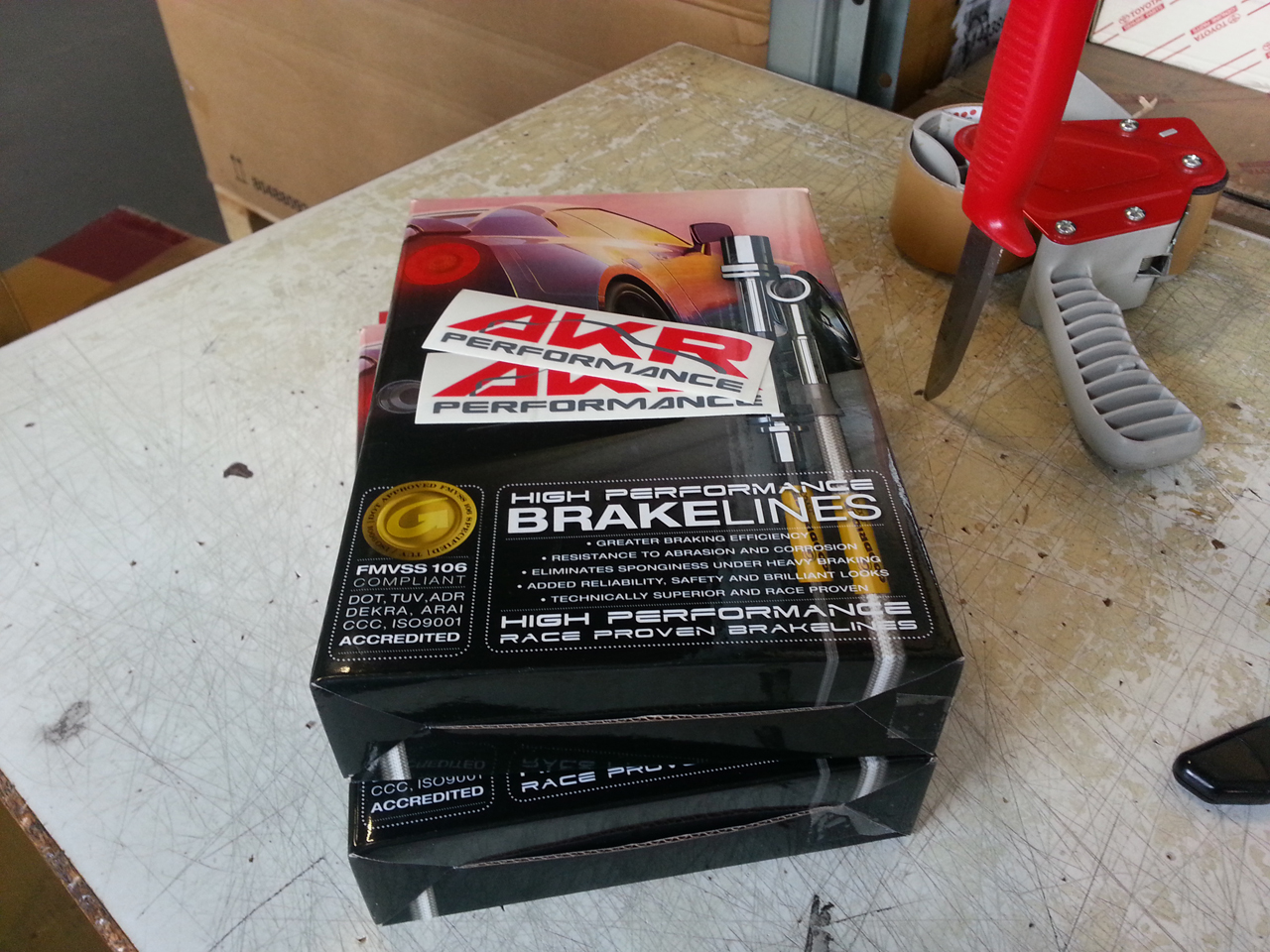 Since my last update I've changed the brake lines, bleed them and had to do it all over again when I found a broken bleed nipple. After I found one, wasn't as easy as I thought. The local part stores didn't even know these came with 4x disc brakes(even though all of the 1.6 models do). Today I changed the oil and filter, adjusted the valves and some other various small things.

As usual, when I touch the valves the car draws blood. This time was no different.

Well first track day behind me in the car since 2012- so far it's been encouraging. Some small issues, one of them I knew beforehand and that's ignition timing. It's not too far off, none the less it's still not perfect. A few little tweaks and it's good. The suspension worked very well. with the old rear setup it was always a bit nervous on braking but now it was spot on. The side moldings need redoing. Even if it looks like it might tip over in the pictures

Heading out to the track. I didn't wash the car before this, I didn't have time. So the dust on it is quality dust that it's gathered for months! 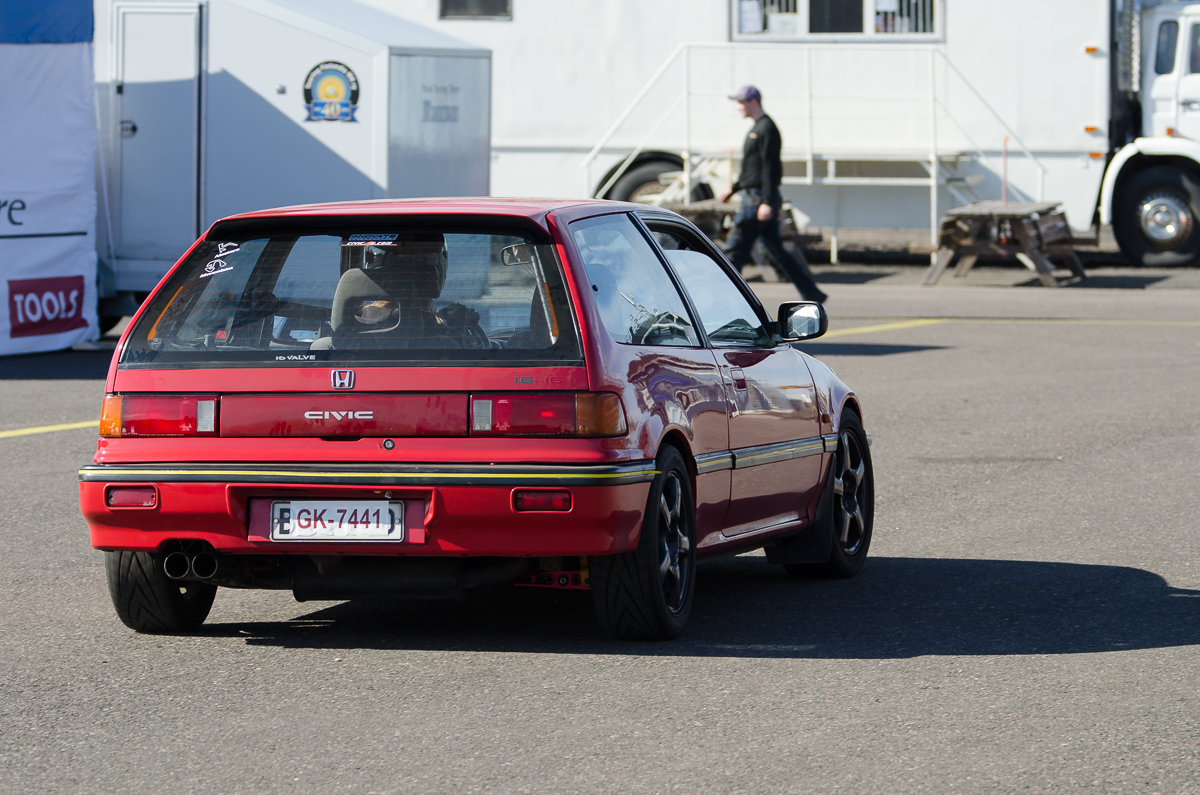 Braking in to a tight hairpin 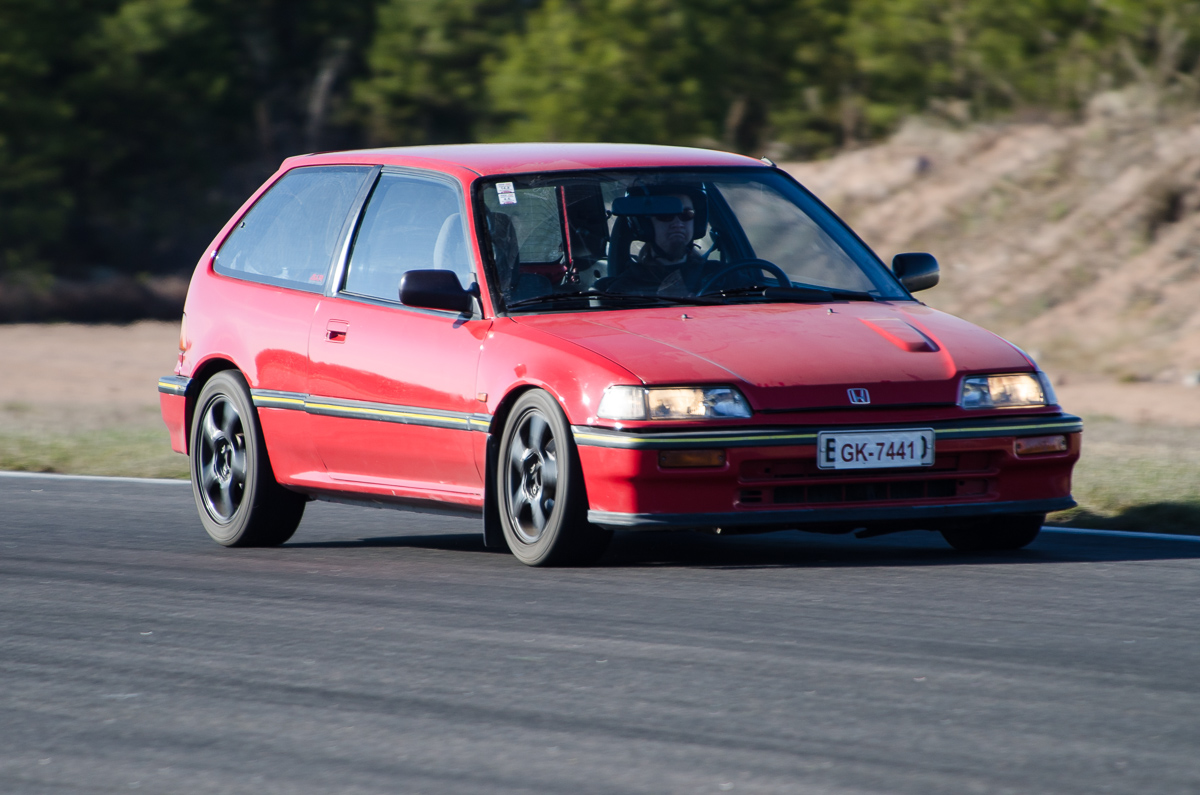 The hairpin. The suspension travel looks a lot wilder than it is. Just nearly cocking the rear wheel. 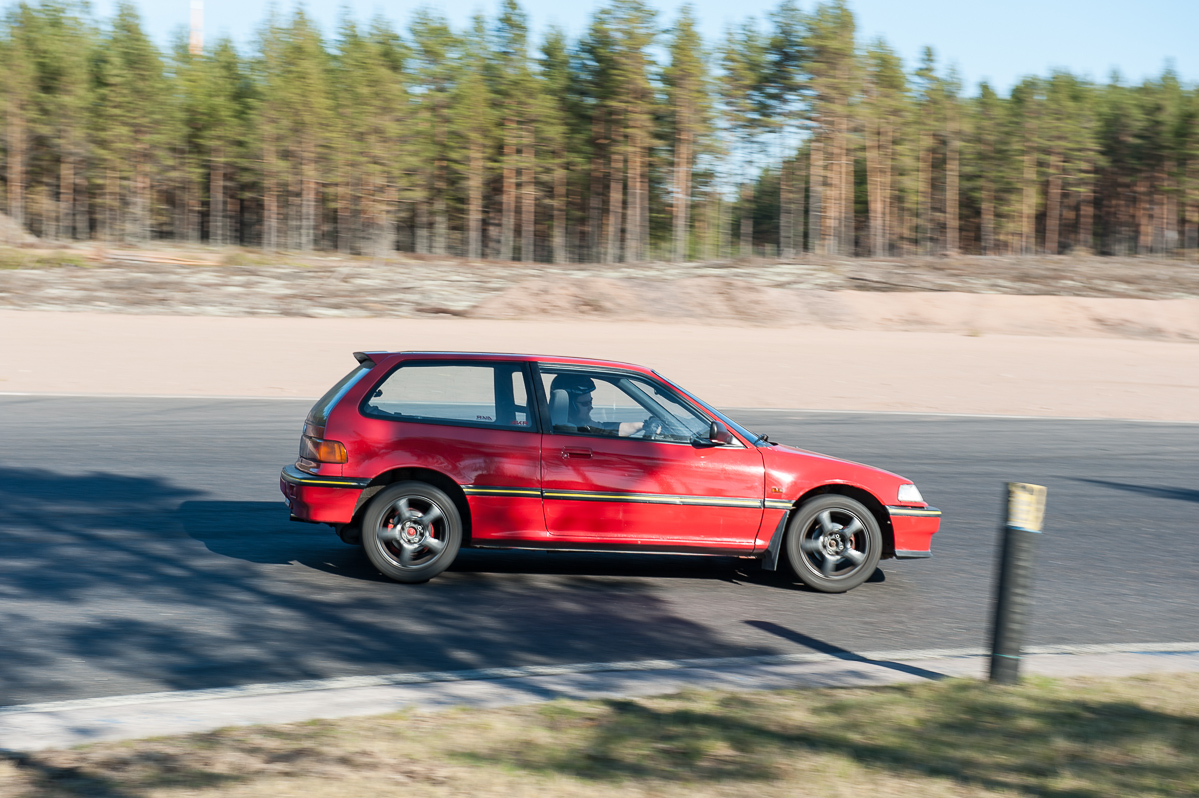 I was in the garage doing some odds and ends for tomorrow. I was supposed to get it inspected but I found some more work that needs sorting out. With a 26 year old car these things happen. Vacation is up soon. Possibly then?

I was doing some timing adjustments and idle tuning. Something all PGM-FI cars have issues with when they get old. A part called EACV(IACV or FITV depending on the honda) gets dirty and stops working. Taking it out and cleaning it is the only way to sort it out. Thing is, you can't open it up completely you just take if off and clean it with CRC or Brakleen. After a while it stops helping and you need a new one. A new one off the dealer is very expensive and costs a lot of money. A second hand unit is the only option and even then it'll be the same deal all over again. Sooner or later(not kidding, I have 3 extra ones more or less broken).

This is the offending article. It had coolant running in to the bottom to heat it up. I got tired of prying the hoses off every time I take it off so I took them off and rerouted the hoses. Does absolutely nothing to the part other than heat it up in the cold. And even that's debatable. 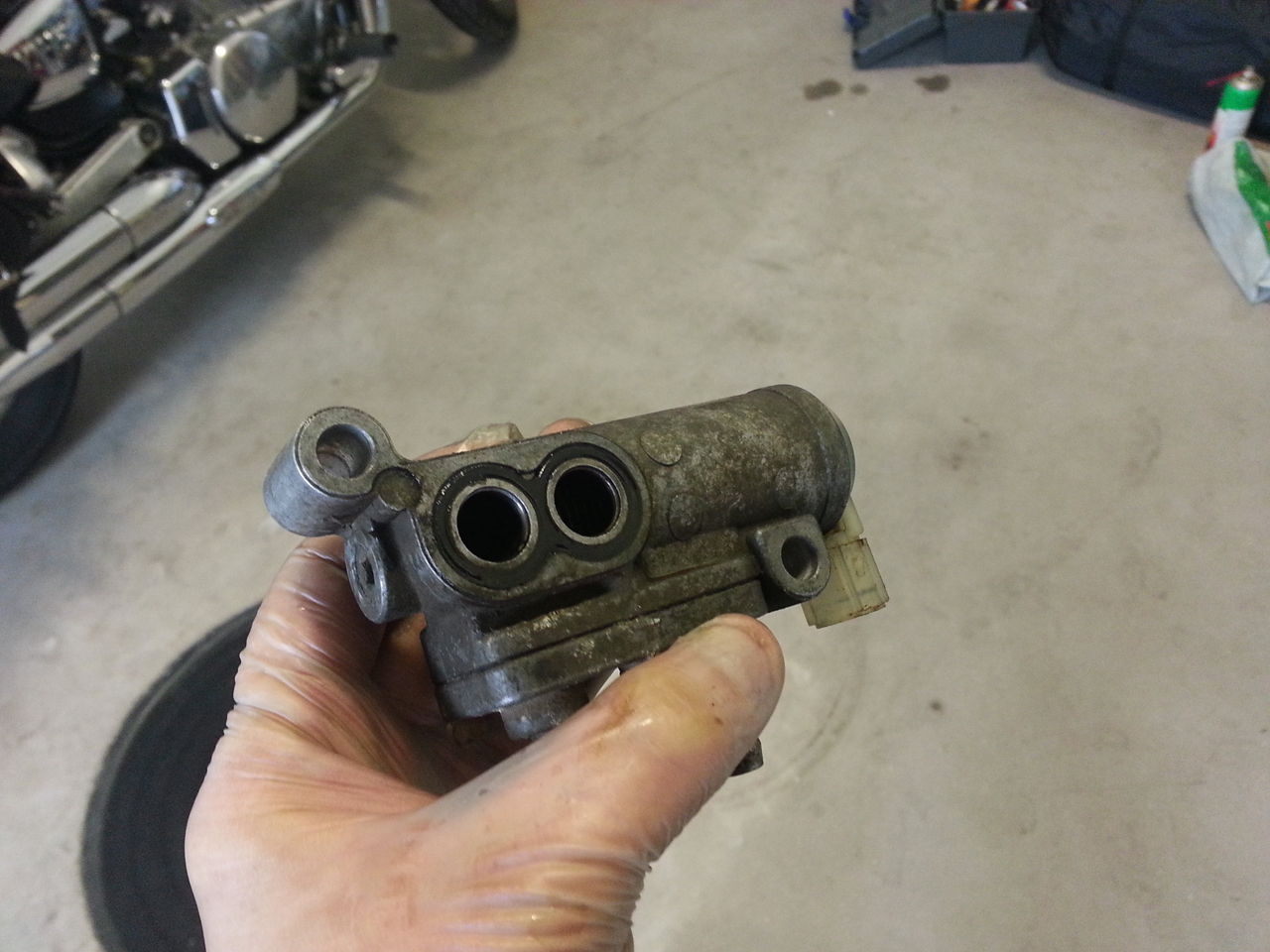 Where it sits. The bolts are easy to remove but the hoses that ran in to it were a PITA. I had a led workshop light on the engine bay to light up the picture.

Update time. The "Little thing" I found was a rust hole. About 2cm x 1.5cm. Not bad, but still a hole. It was around one of the 4 bolts that holds the front crossmember in. The hole stopped the bolt from coming out the normal way so I made a bigger hole. Now it's about 5cm x 5cm. I need to get some steel and weld it back in(found that we have none in the garage). The front crossmember was looking sad so cleaned it up, gave it some power tool and painted it black.

"fresh" out of the car 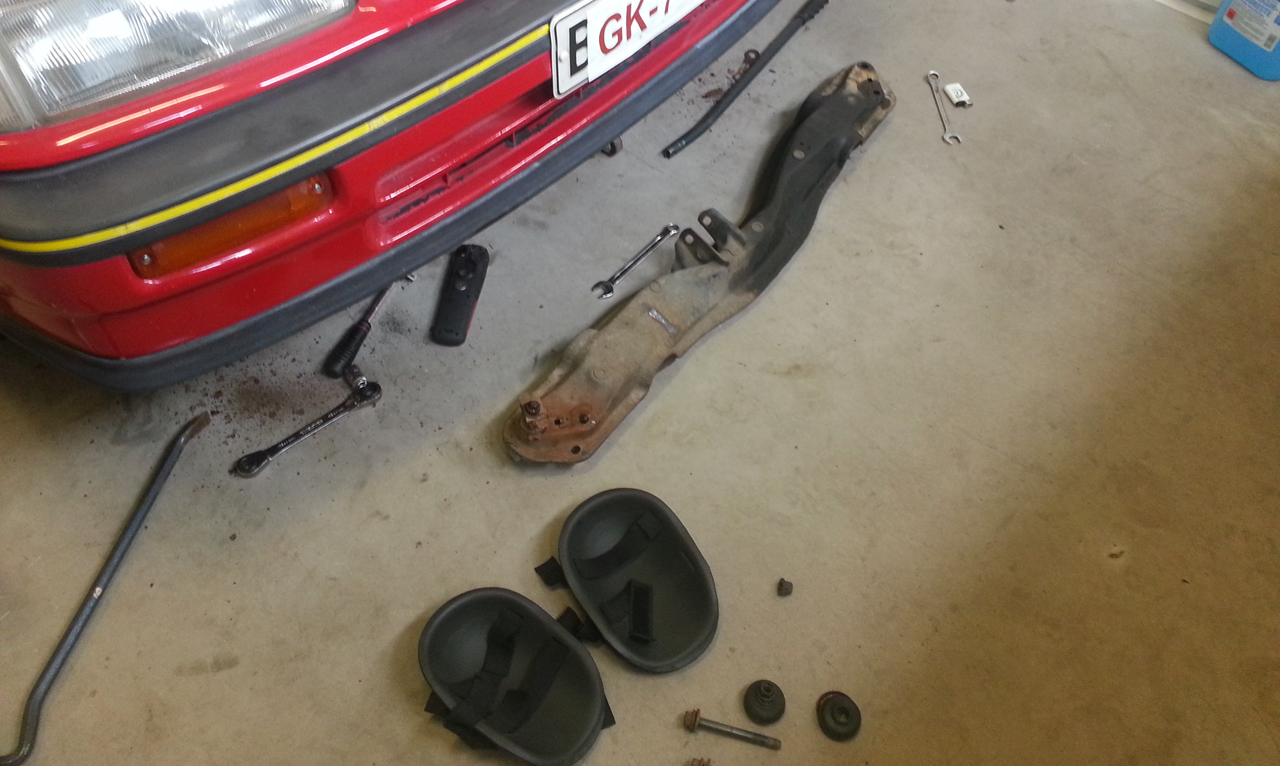 Painted ready to go back in. 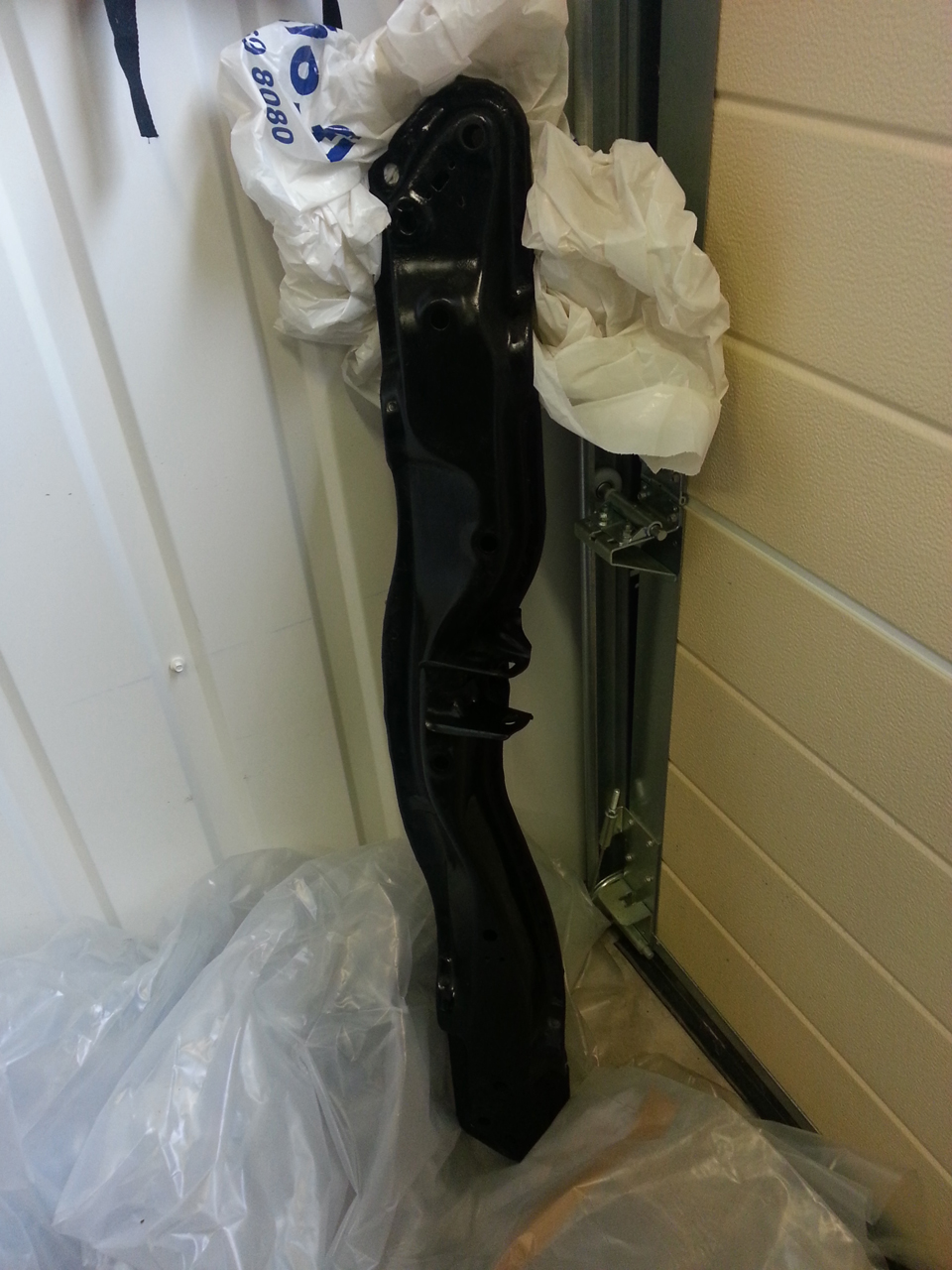