Re: the black donor car

I think you should chime in..

Well why not. That hatch had to have been a new record.
Have you ever noticed that anybody driving slower than you is an idiot, and anyone going faster than you is a maniac?

Well things happen! I sort of had a loss of interest during the winter. Now I got shit done! I had an intermittent idle problem. A problem where my idle would drop and the AFR would fall as well. Turned out that years after the last proper programming and settings changing between the ignition timing on the dizzy end as well as having a different throttle body with a different setup on it the idle was dropping in to an area of the ignition chart that has a less than favorable setup in it. While it's relatively easy to fix my friend with the laptop and other hardware can't get chips until monday.

One other thing I knew about was a small(about 4x5 cm) hole in the front behind the bumper/inner fender just behind the washer reservoir. I took off the bumper and the reservoir. Grinded all the metal down and put in some protection. Tomorrow when it's all dry I'll put in a patch panel.


A collection of 4th gen at our garage: 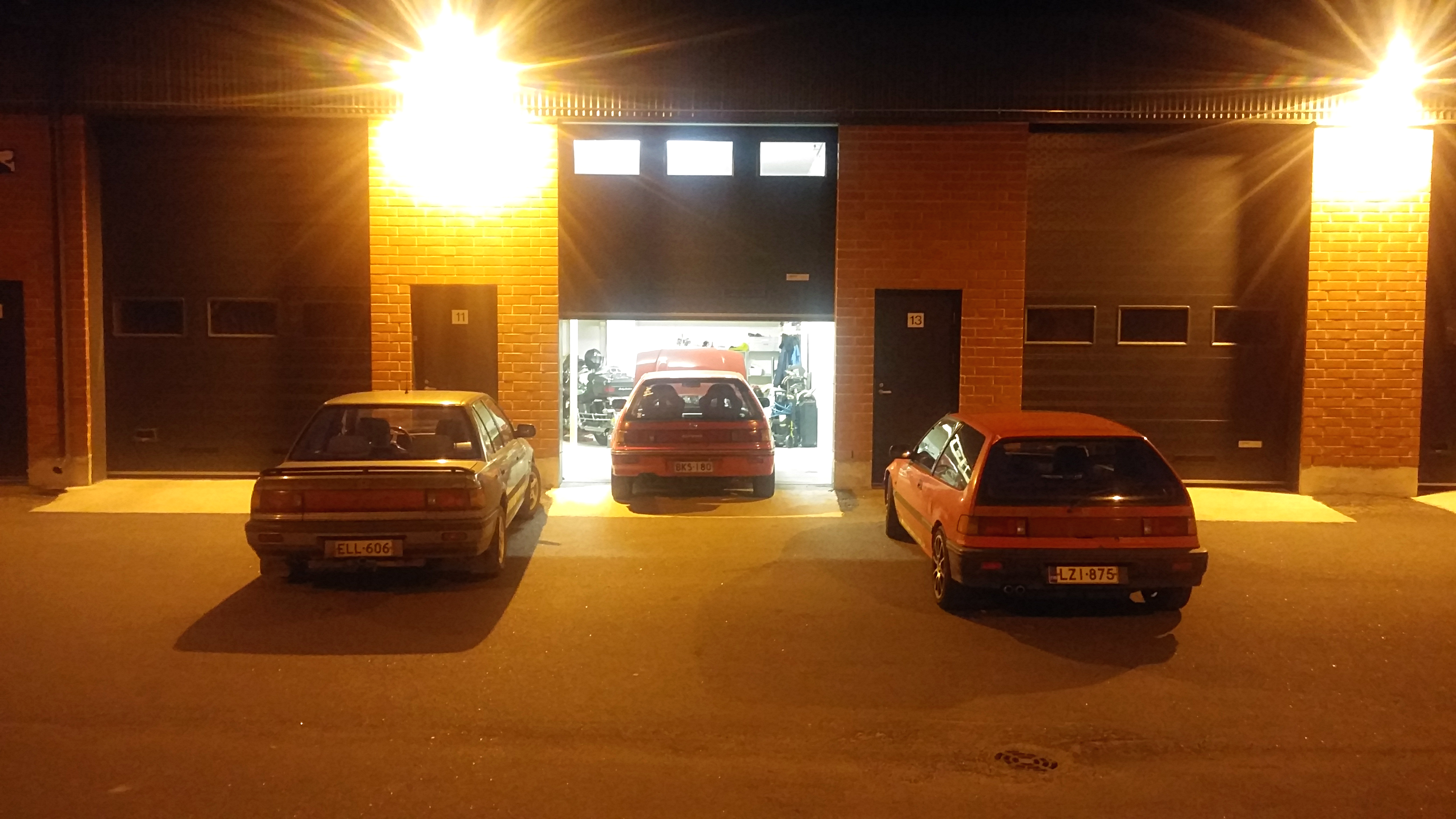 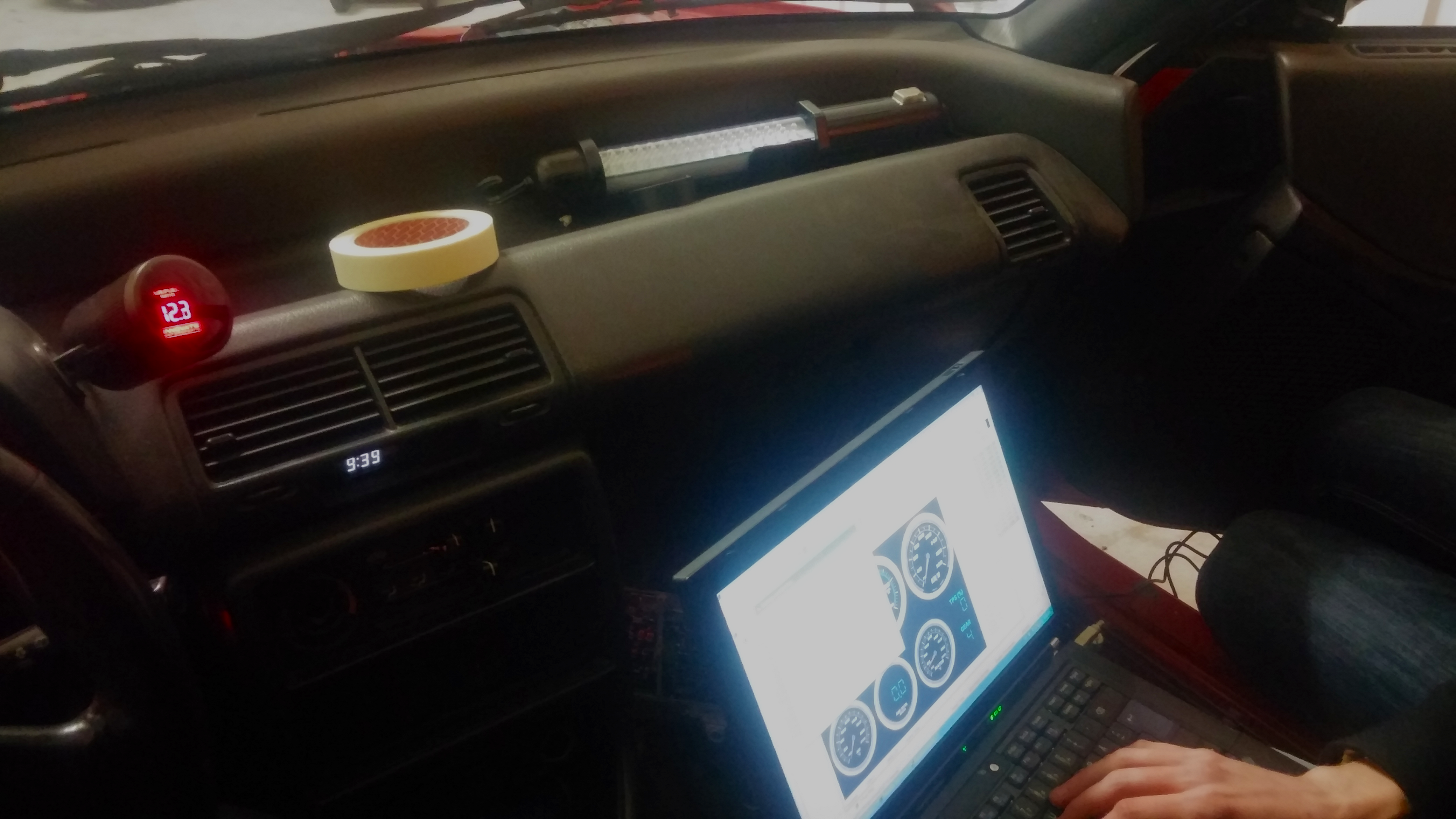 Today I took this issue on. After buttoning up my vulcan I figured I'd start this as well. 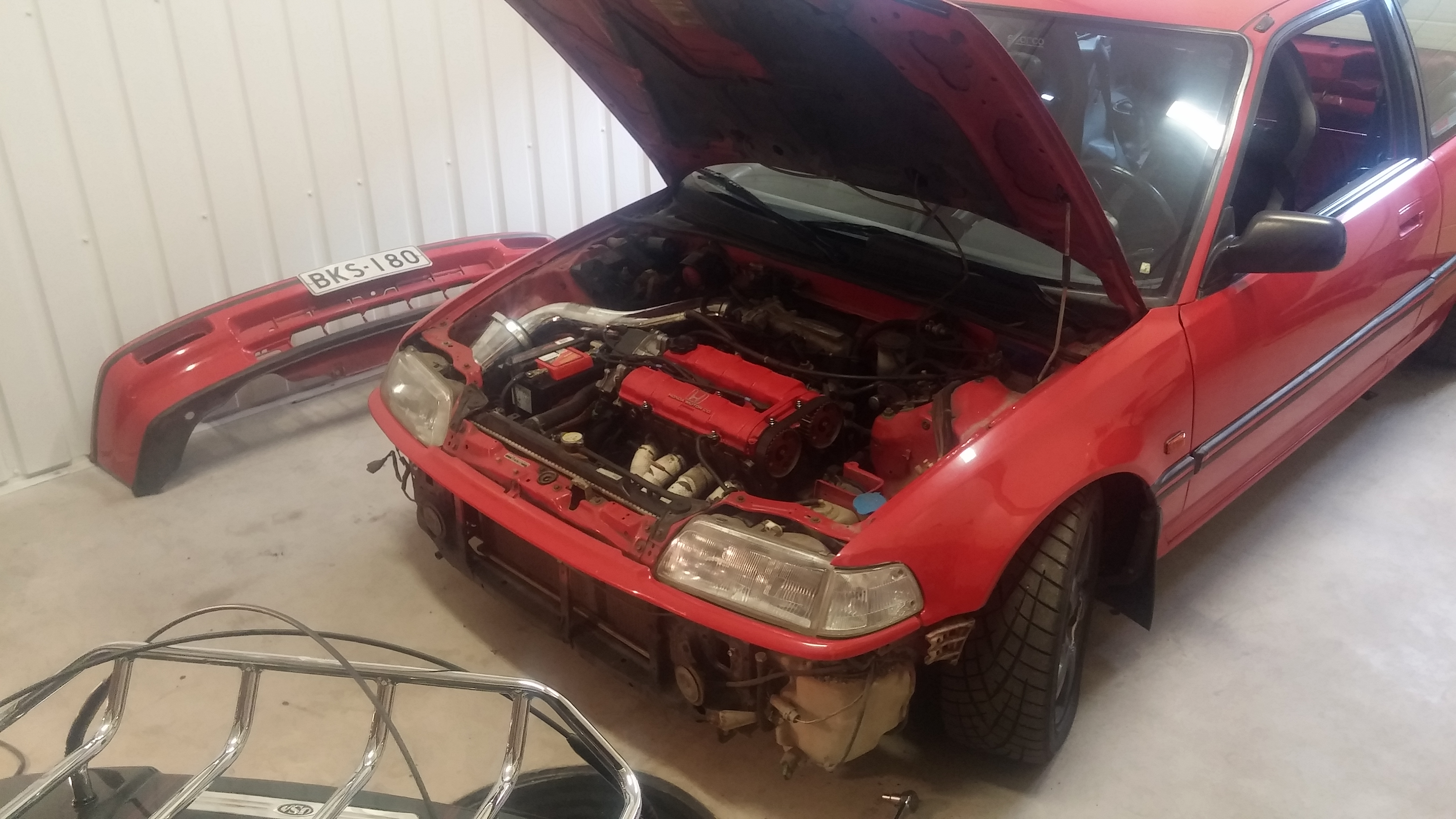 4th gen civic are so cool, something about them and the way they feel.
The Night Rider's Flickr​

Tech wise they're just about the same as the 5th and 6th gen so they're relatively easy to work on and find parts. The only thing you need to worry about is rust. I got my first 4G by accident back in 2003. Had at least one ever since.
Have you ever noticed that anybody driving slower than you is an idiot, and anyone going faster than you is a maniac?

A late post again, but hey. Better late than never.

So we got the idle tuned. Looking at what was happening I would suspect that I need a new fuel pump at some point. Also, my left rear caliper shat itself just before inspection about a month ago so I had to swap that out. Lucky for me a local store had one in stock. After that it passed inspection with flying colors. No issues what so ever. A couple of years ago I was thinking of an ITB setup. As of now I have two extra intake manifolds and I'm going to try and make one. We'll see how that plays out. I may convert from obd0 to obd1 if it makes it easier to tune - we'll see. 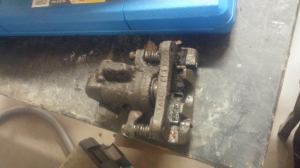 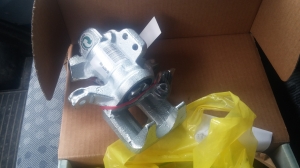 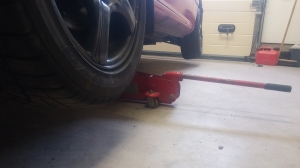 And that iratic idle that has been plaguing me for a couple of years is now gone. Now that I had the right tools again

The next thing I'd like to get sorted, probably next winter involves cutting one of these in two right after the fuel injectors. 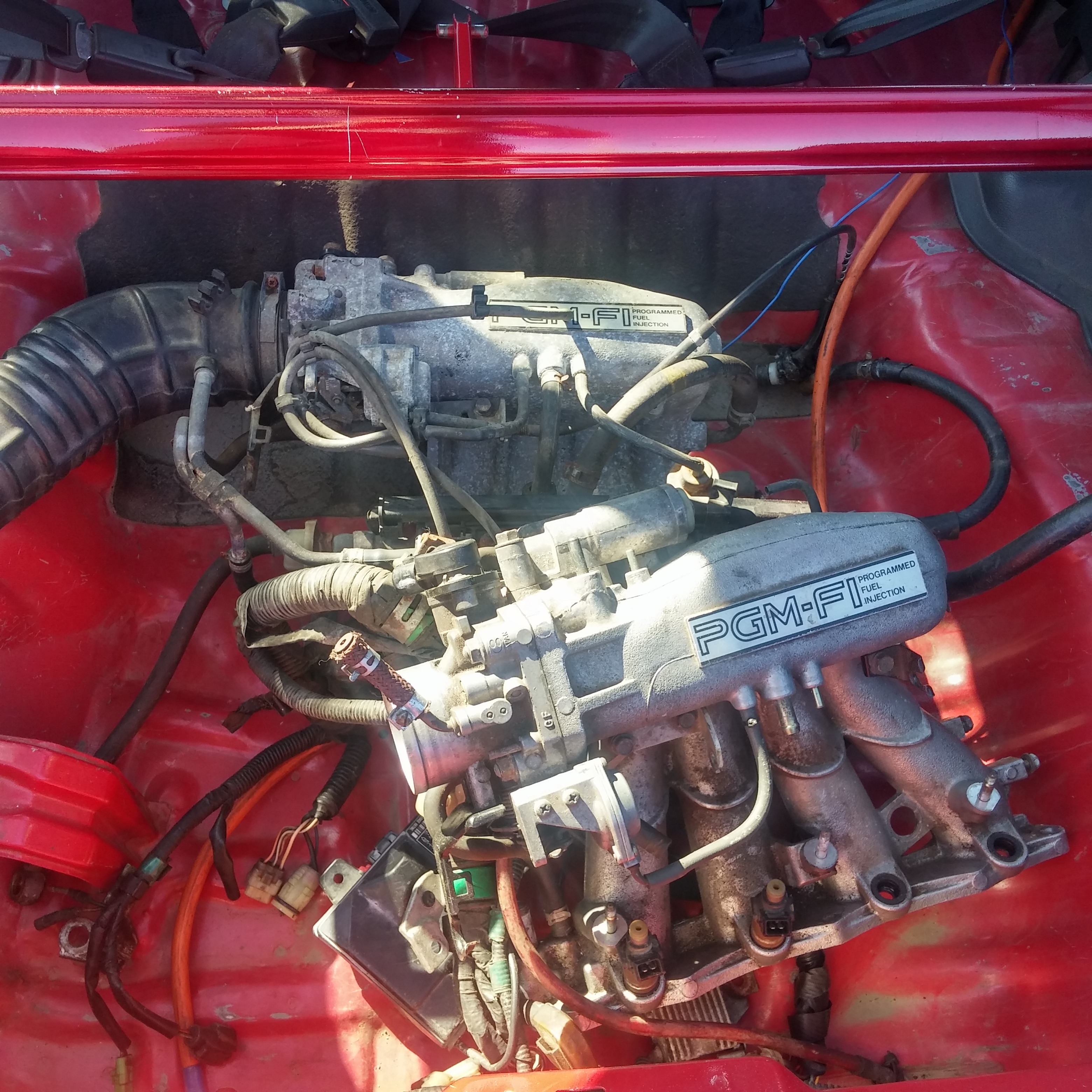 Oh, so plans for ITB's or bike carbs?
The Night Rider's Flickr​

Itb's. I'm not going to mess with carbs when I have fuel injection
Have you ever noticed that anybody driving slower than you is an idiot, and anyone going faster than you is a maniac?

Looks awesome! I would love a K-series swap. Too bad it's illegal here. A B20/vtec(aka frankenstein) is still legal though. That looks like a lot of fun

A little issue every older honda owner faces every now and then is irratic idle(not related to my previous tune issue). Is when the idle wonders between 1000-2000rpm. The cause is an Electronic Air Control Valve(EACV, or IACV in some places). It gets dirty from the valve cover breather and it starts acting up. You can clean it up for a while. At some point you need to replace it. Unfortunately it's very expensive so new is not an option.

I had already taken out the coolant circulation out of it to make it easier to remove and clean. It's only to help it work in the cold. Not needed in my case. Last thursday mine packed up so I had to replace. Two 12mm bolts and one connector.

Soon it'll time to take her off the road again. The owner of our garage sold it and is moving to spain. For a while it looked like she'd be sitting in outdoors or in a multiple car garage and I'd not be able to work on it. But our luck turned and we scored a 70 square meter two car garage that used to be a car repair shop. So, what needs to be done and what I want to get done.

After a this summers track days and an exploded oil filter seal later the things I need to do this winter include a new alternator(at least take out the old one and inspect it), new timing belt out of a mitsubishi space wagon(same size only one teeth shorter), new tensioner and water pump.

Things I'd like to get done is that ITB setup I mentioned earler, new cams and get some more weight off the car(I have plans... ).

The last track day of the year started badly. On my way home I did a little shakedown drive. And ended up in the middle of an industrial area with a good deal of my engine oil all over the place. Culprit was still to be found. I calculated that the oil pump will empty all of the oil in the engine within 4 seconds. Thankfully I was on top of it and I turned the engine off within a second of the failure. This was the fist time in nearly 11 years and 100k km that I didn't make it back home. 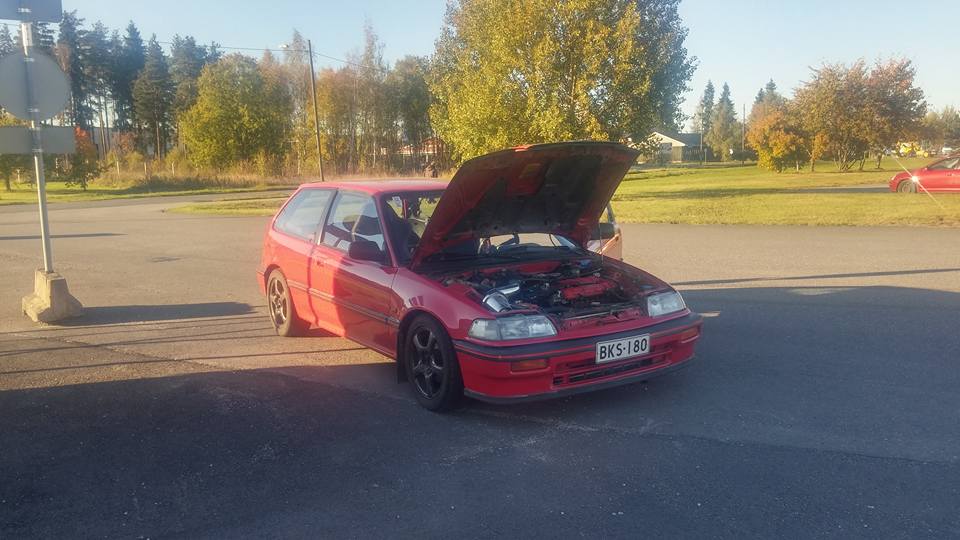 The culprit was a failed oil filter seal. I had bought it a month back. It wasn't too tight and there was no visible reason for it to fail. It wasn't on too tight and the old seal was removed with the old filter. I got new ones from warranty and the trip was on! I knew the alternator belt would possibly be a problem having being drowned in oil. I also suspect the alternator might have been damaged as well. The engine itself was all right since I caught the problem as soon as it happened.

The last track day I managed to go to(and promised to go to) was a public one. And even when the organizers failed on numerous accounts the day was fun. 1142km later I was home and the car made it home. 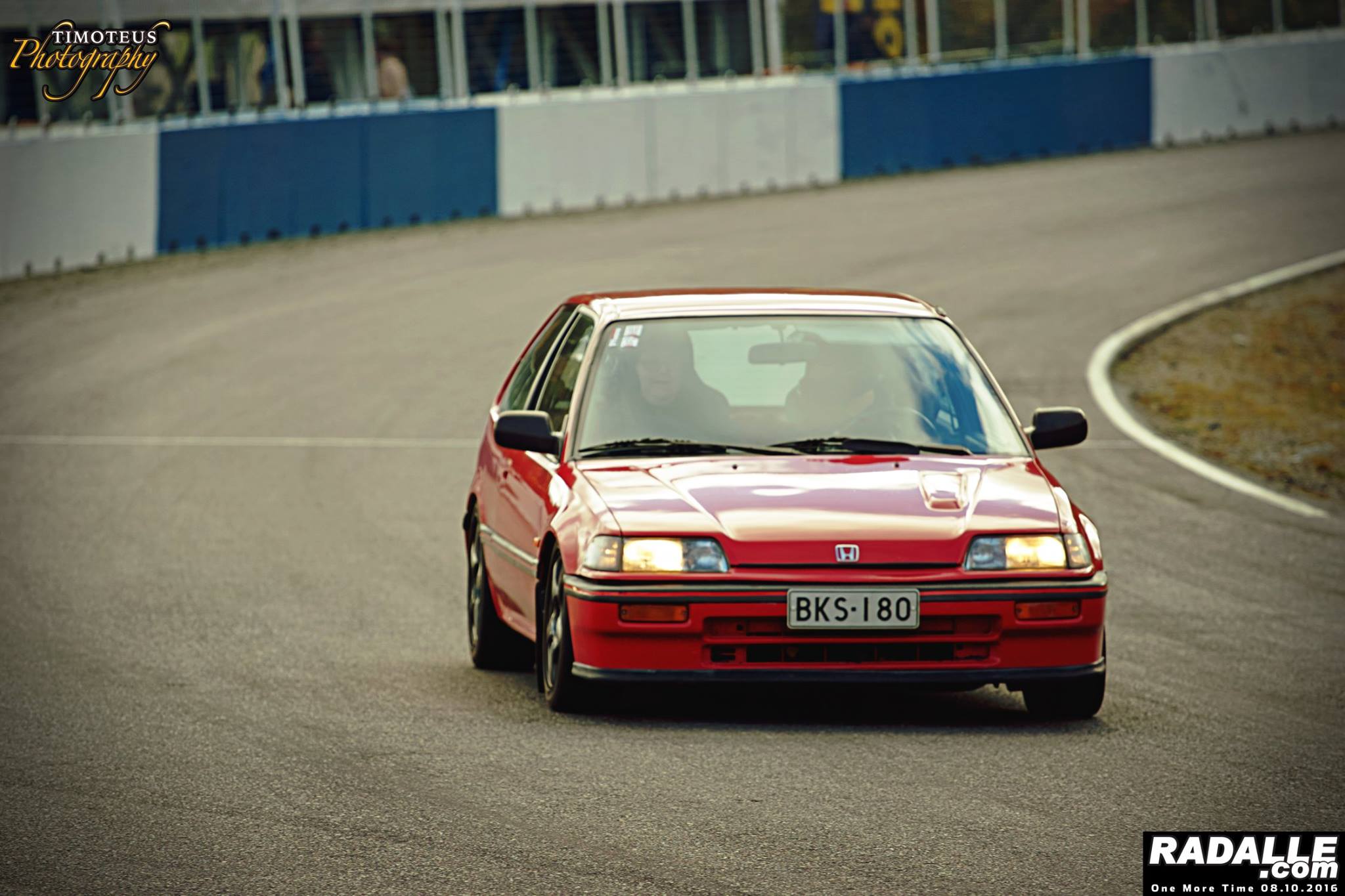 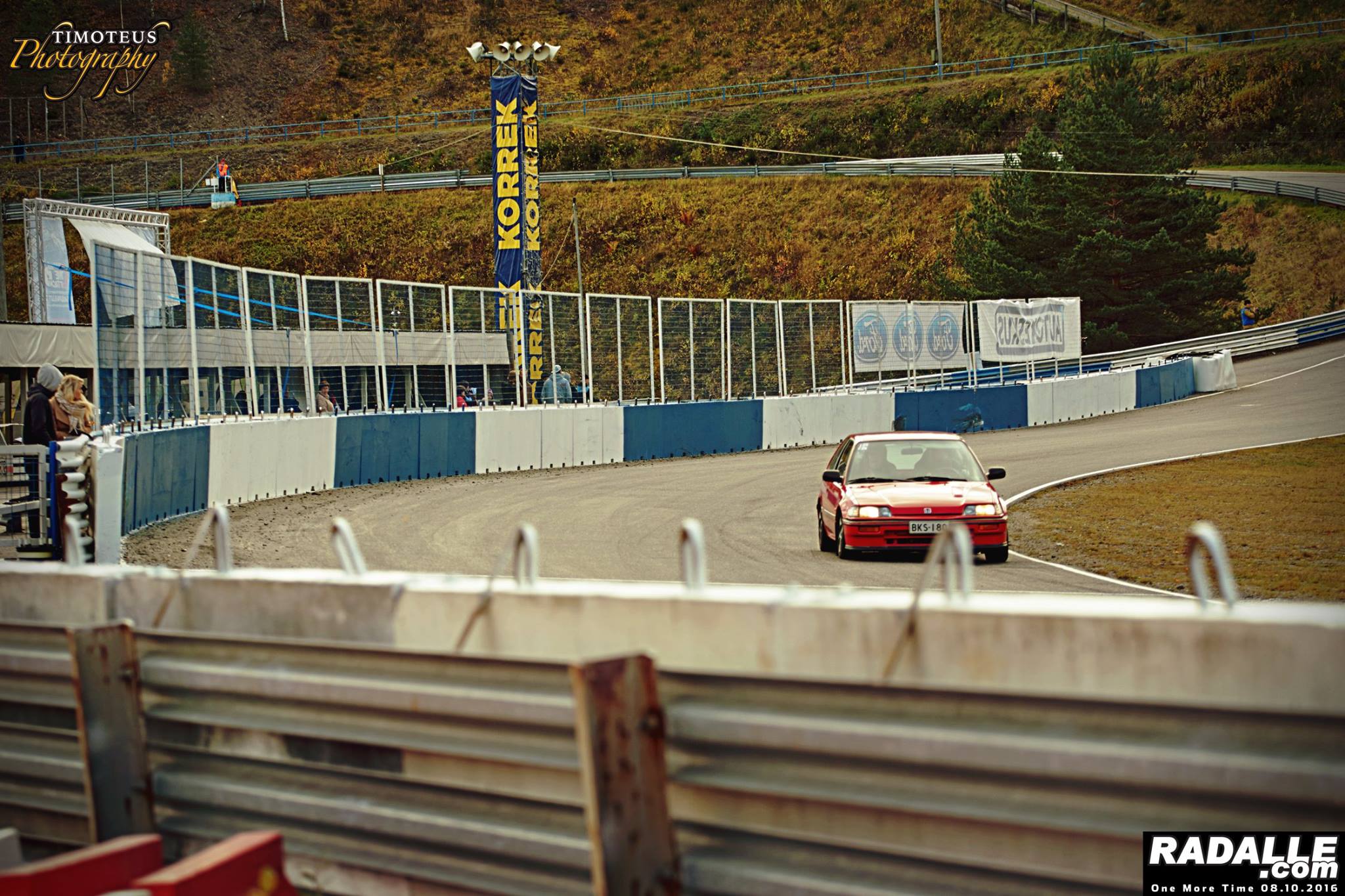 Well, as I said we had to move garages. Today I had to "break in" working in the new one. Even when the weather is bad enough to use the winter beater, it's not inspected so I have to use the dohc for now. After finding that the mixture I had in the coolant system wasn't enough for the temperature, thawing it out and fixing the situation my heater motor packed it in yesterday. Today after taking down some walls in the new garage I picked a new one from work and installed it. Job done - car warm. Tomorrow I'll sort out the sedan.

Shot from the new garage: 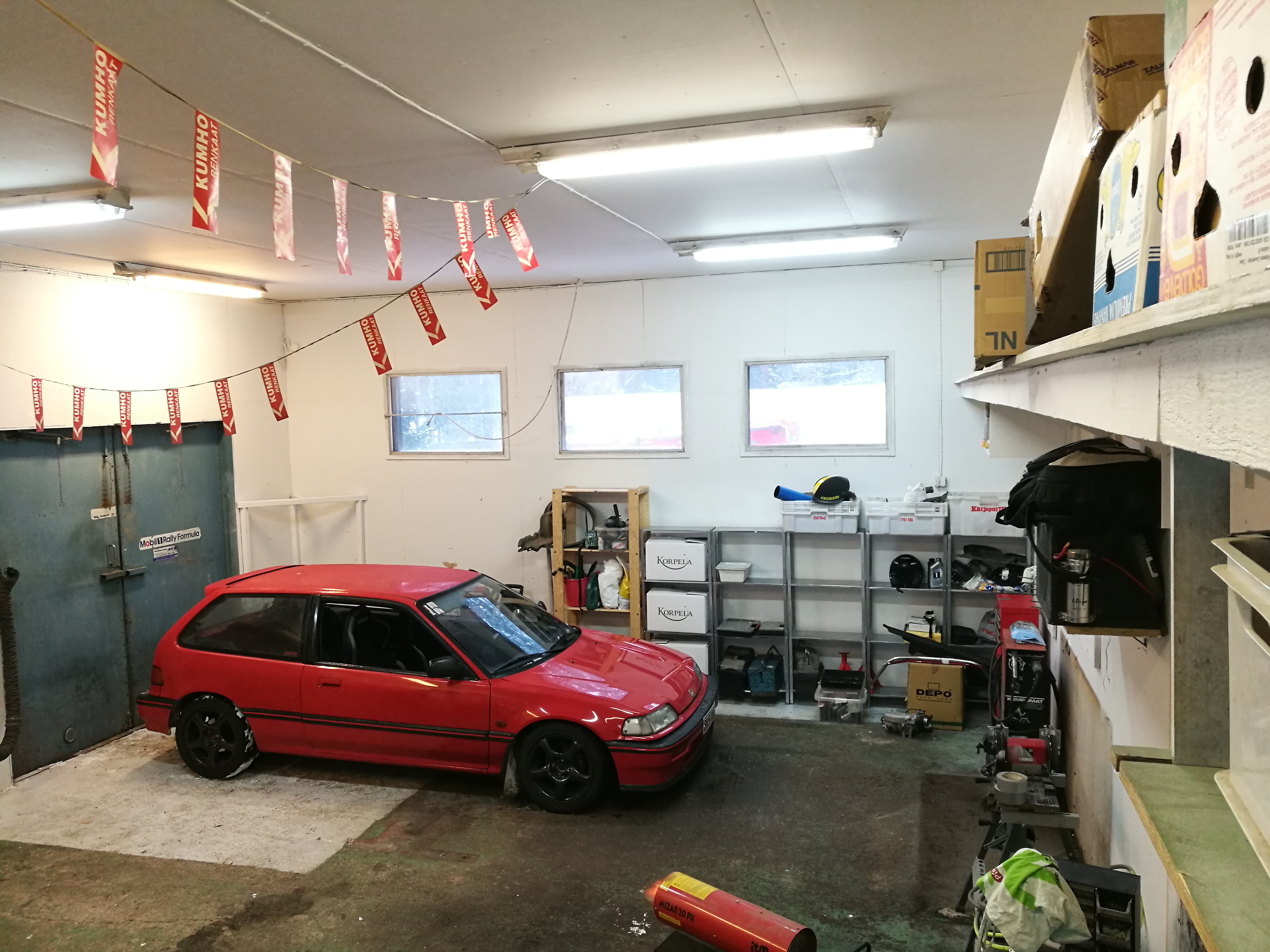 Anesthesia said:
Figure I'd post my winter beater now that I'll be using it for a while. Same gen Civic sedan, stock.

So it's a sedan, same sized engine but a sohc 16-valve same multipoint fuel injection. A little less power but enough to get around when the other one is off the road. Power steering, locks windows and mirrors. This'll be stock. I don't need it to be anything more than it is.

I had a volvo 240 that I sold last winter, I had one like this and I decided to get an other one since the previous one worked fine. Someone had had an accident in it, the front bumper is wrong and the steering wheel has been changed, I'll do something about these if I keep this one for longer than the 240. A little rust creeping on the rear wheel arches, the body is solid, so are all the other problem areas. Having played with this gen for a long time I know the problem areas and this one isn't that bad. The right hand side rear had the worst of it.

Well, I still have this thing. And it has served me well. Should have made a separate topic perhaps...

Last winter it got a set of new studded tires and that's about as much as I've had to(had any interest) do to it. Until now. The part about the right hand rear wheel arch I highlighted above? Well it started looking rather nasty so I and and a friend of mine(that threatened to come over and cut them off during the night if I don't do it) decided to do something about it. The waiting inspection is also a factor in getting rid of the massive holes we found under all that rust and poorly applied bondo(how was that even on there for so long?)

I started from the rocker panel. A customer of ours at work did some work on it years ago. Pulled a fast one on me to make a few bucks but that's a whole new matter. The spot gave up on the lif and that needed some work. After further inspection the end was so soft we just took the angle grinder to the whole damn thing. The end of the inner arch also got to go later on. As did that inner side and that crusty exhaust. 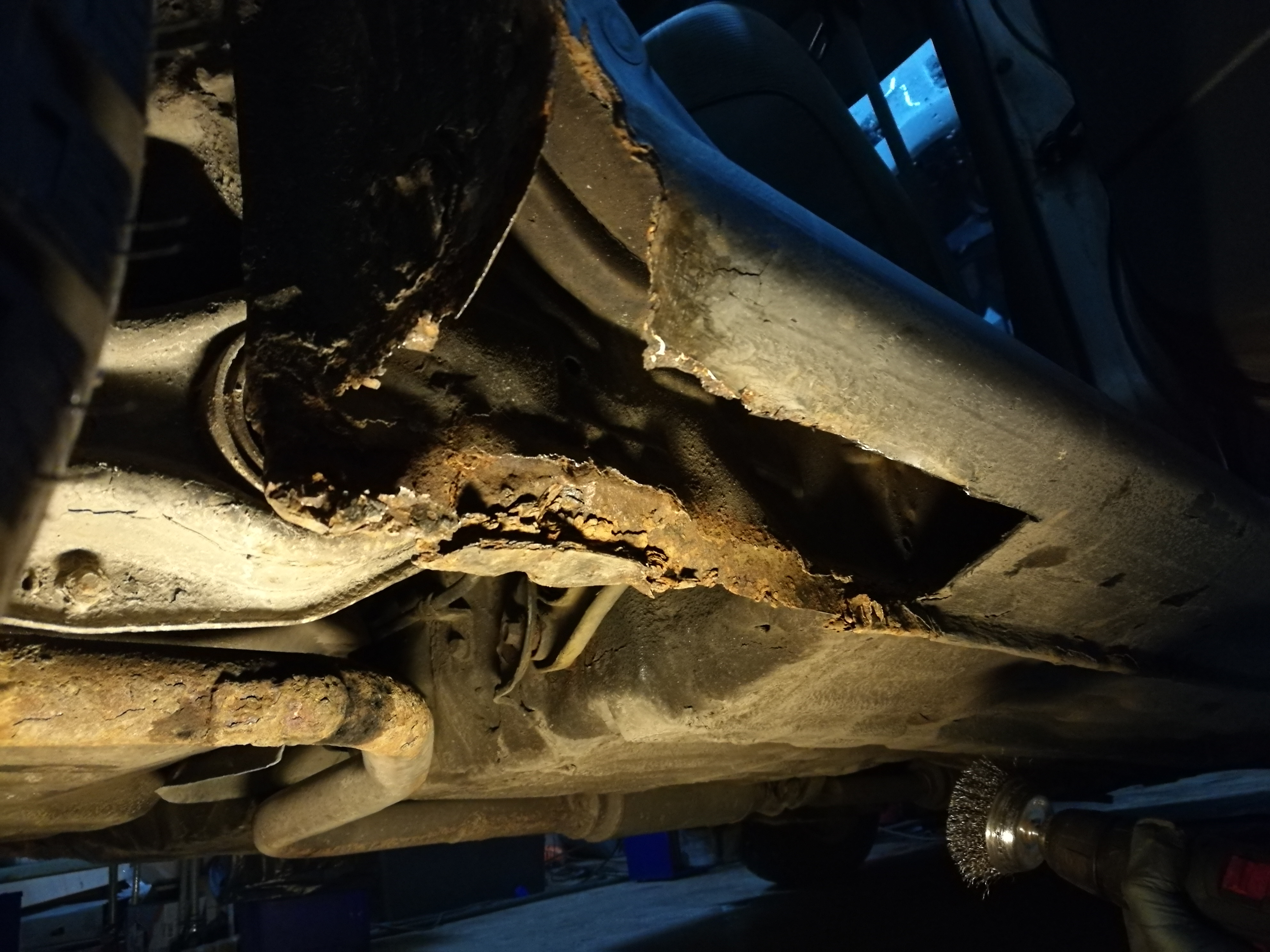 Some of the "antique metal" that started this whole operation. This is after a screwdriver was applied to make sure anything that can fall off has fallen off. 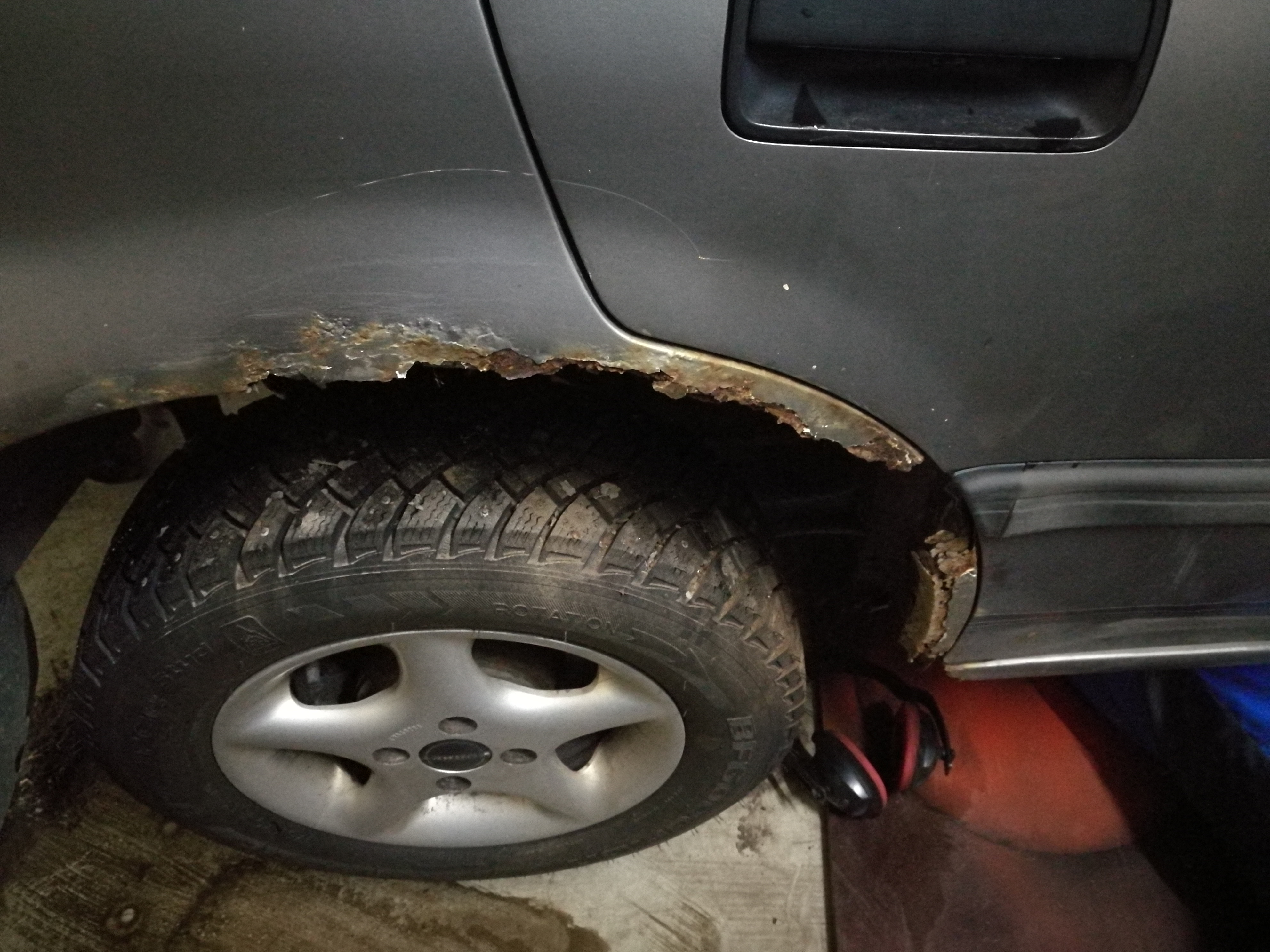 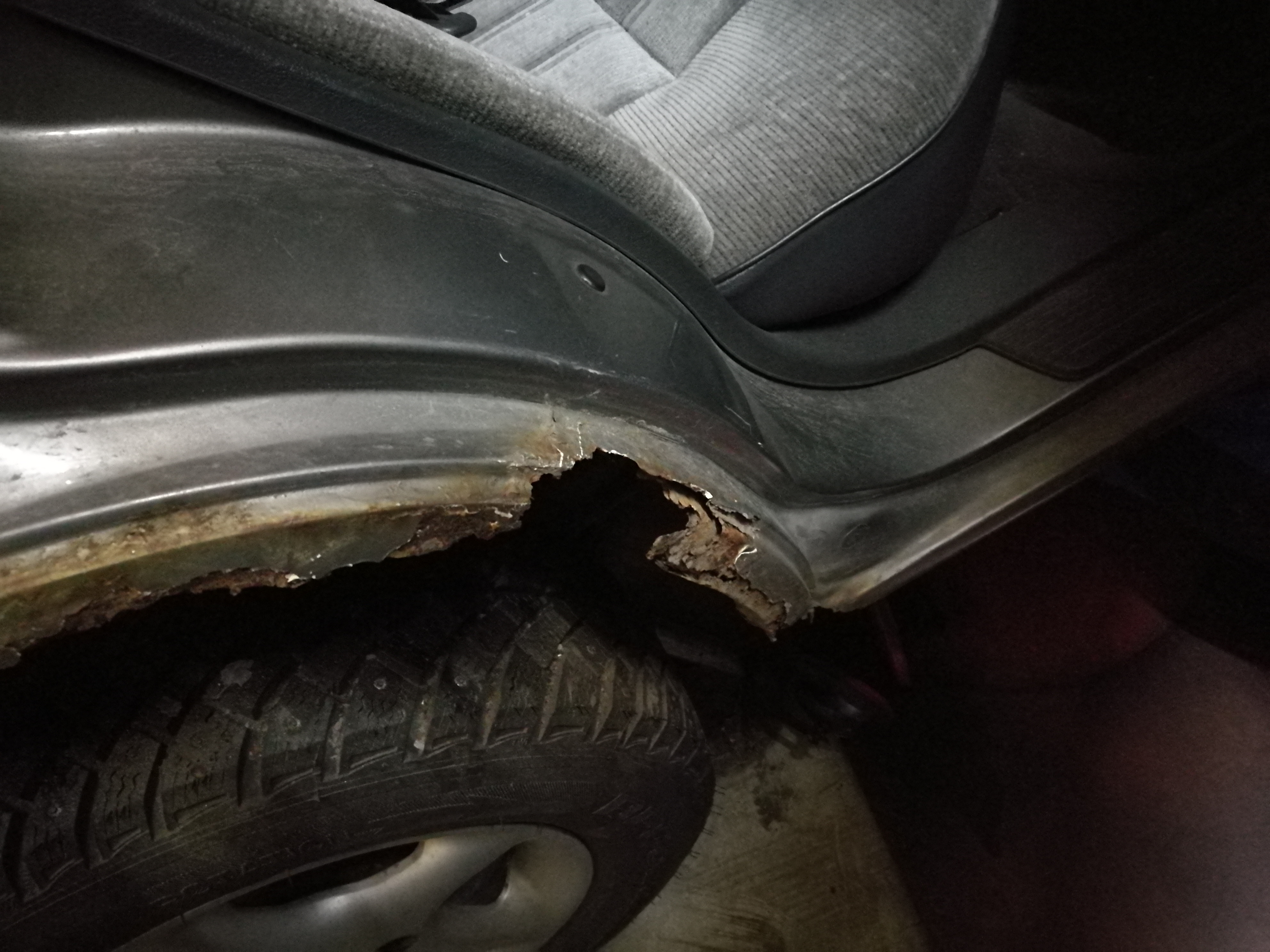 With the exception of the rear bit, the inner wheel arch fixed(the rear part was fixed later) 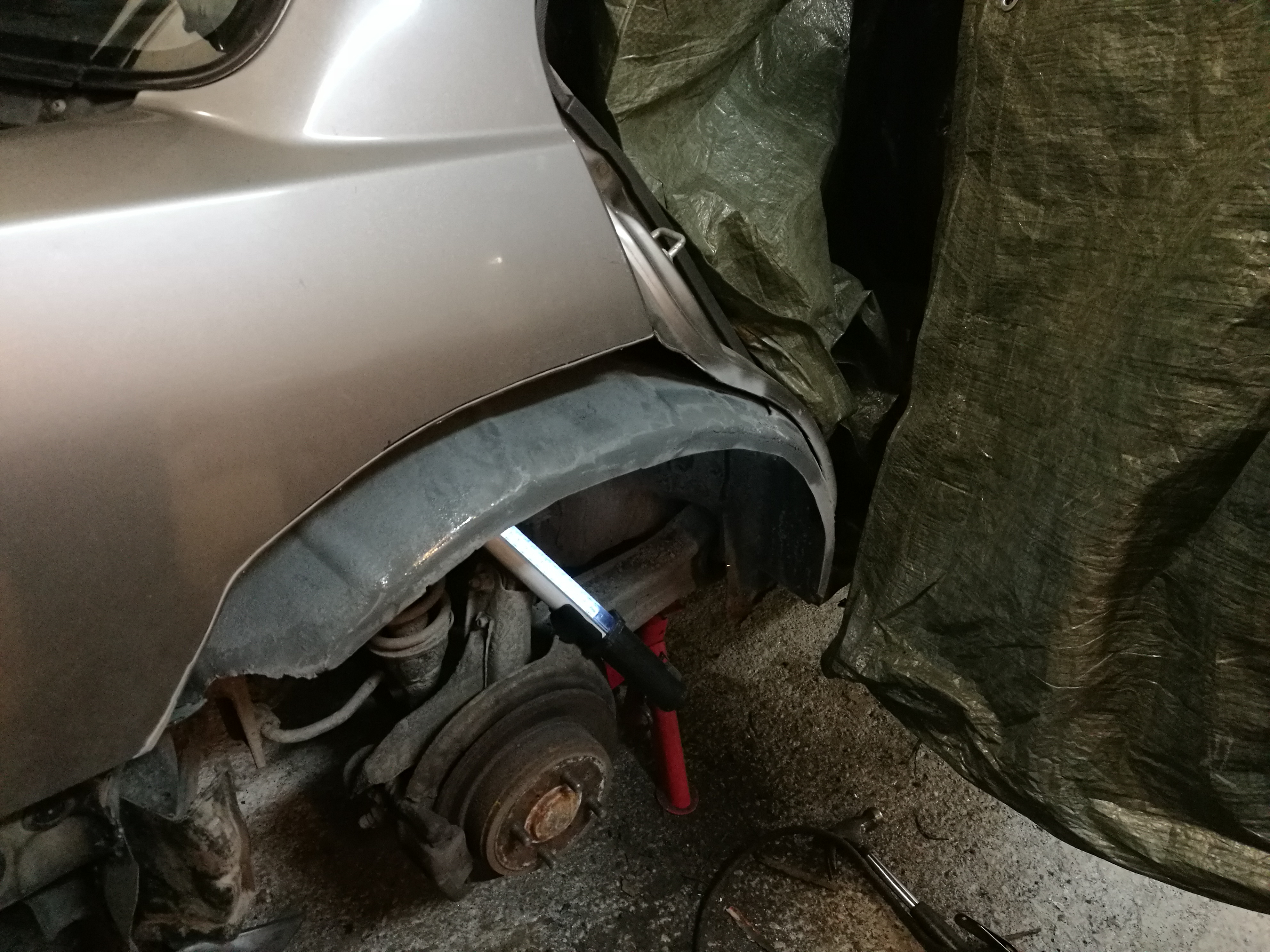 New wheel arch tacked in place. After this it was just a matter of welding it properly and applying a little layer of body filler. 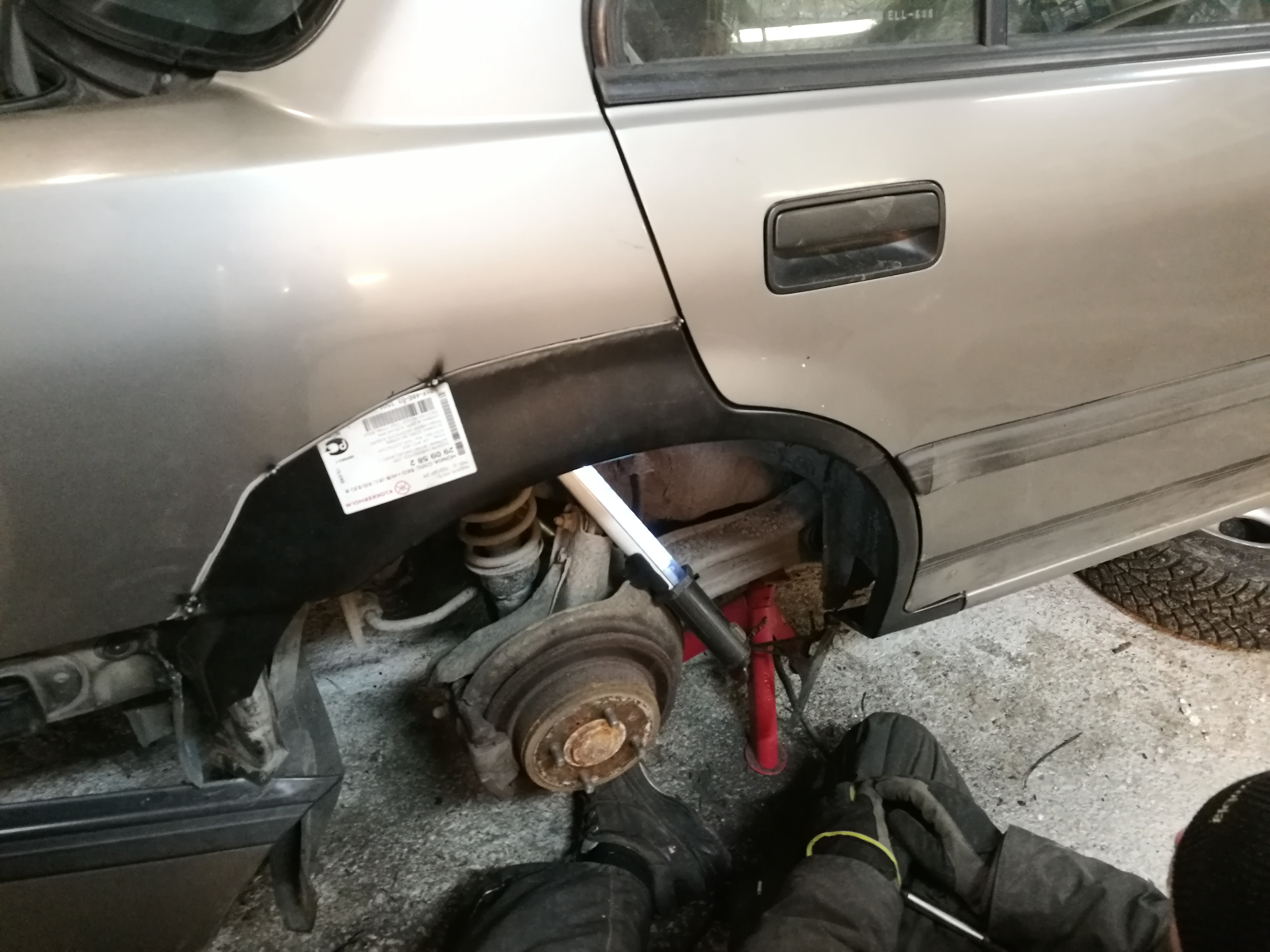 The rocker panel is also just about done. We ran out of welding gas so we couldn't finish the last 20cm or so. Tomorrow is a new day. Had I been at it every day it would be done already but I haven't. So it's not. 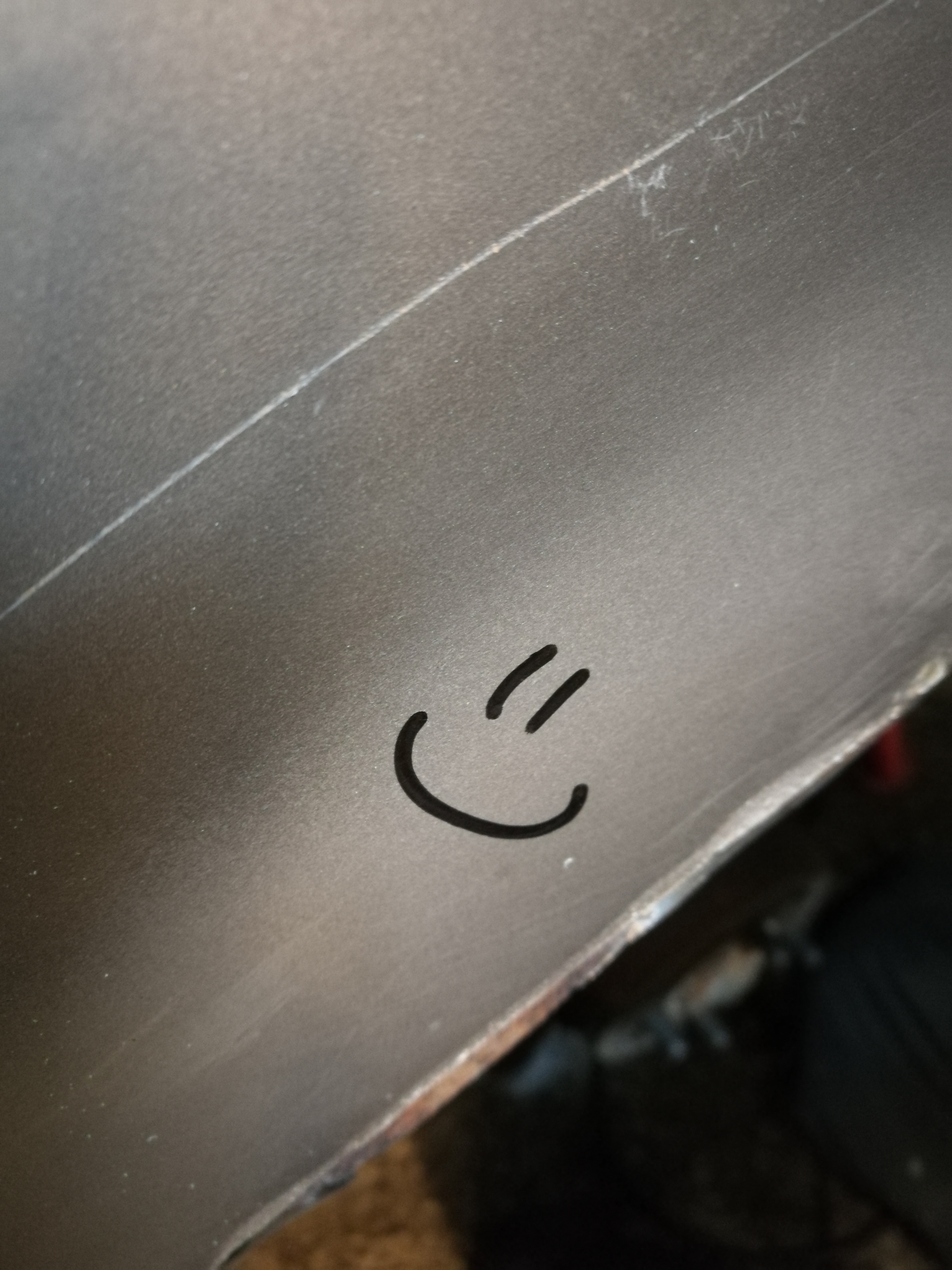 I remember seeing that car.

The very same! Back then the bondo in the rear quarters was on slightly better.
This thing has gotten the minimum TLC it could get past an inspection with. I probably should be nicer to it.
Last edited: Nov 27, 2016
Have you ever noticed that anybody driving slower than you is an idiot, and anyone going faster than you is a maniac?

At the time, I though it looked cool, but I blame that to the fact that I never saw those before. :lol:
Moths are just goth butterflies.​

It wasn't that bad looking back then with most of that hidden under bondo. I didn't want to touch it since I knew what to expect.

Also, every year at the inspection they'd point out(verbally) that I should do something about them.
Have you ever noticed that anybody driving slower than you is an idiot, and anyone going faster than you is a maniac?
You must log in or register to reply here.
Share:
Facebook Twitter Reddit WhatsApp Email Share Link
Top