Another two-seater convertible for the Texans

Woo, a Sprite, the happiest car ever designed! Awesome!

The plates look great on it.

Our focus on the Sprite lately has been primarily chasing electrical gremlins and also trying to tune the engine up. There's definitely some sort of bad ground that I need to ferret out. I installed the solid-state flasher controller and the turn signals (with LED bulbs) work great when the car is not running, but when the engine is running they don't work at all. The tachometer works or doesn't work depending on the position of (what I assume is) a dashboard illumination switch on the underside of the dash behind the steering wheel. I poked and prodded with my multimeter and I haven't found anything weird yet, but there's a lot of old wiring to sort out. It's frustrating, but I gather this is par for the course. Earlier I'd removed the aftermarket radio and removed all the needless wiring that had been stuffed behind the dash for it. Simplifying and reducing complexity seems to be a good path forward for this debugging.

More exciting, we tuned the idle and carbs yesterday afternoon. The car was previously running super rich and idling at about 3000 rpm. Diving in, we discovered that the choke cable wasn't adjusted correctly and was not actually actuating anything on the carbs. We'd never noticed this, though, because the choke was stuck open on both carbs. I adjusted the tension on the choke cable so that it can now properly engage the full range of choke, and un-stuck the two plungers. Then we were able to adjust the idle set screws and get the car leaned out and idling at about 1000rpm. It's so much quieter and happier now!

Back to the electrics is next on the list. I'm not quite sure where to start, but there are countless things to check and investigate so it's not frustrating yet.

We also received the new axle straps from Strapping Lad Shop but that's pretty far down the list on things to do.

Cool car. Neat to see something like this stay in the family. 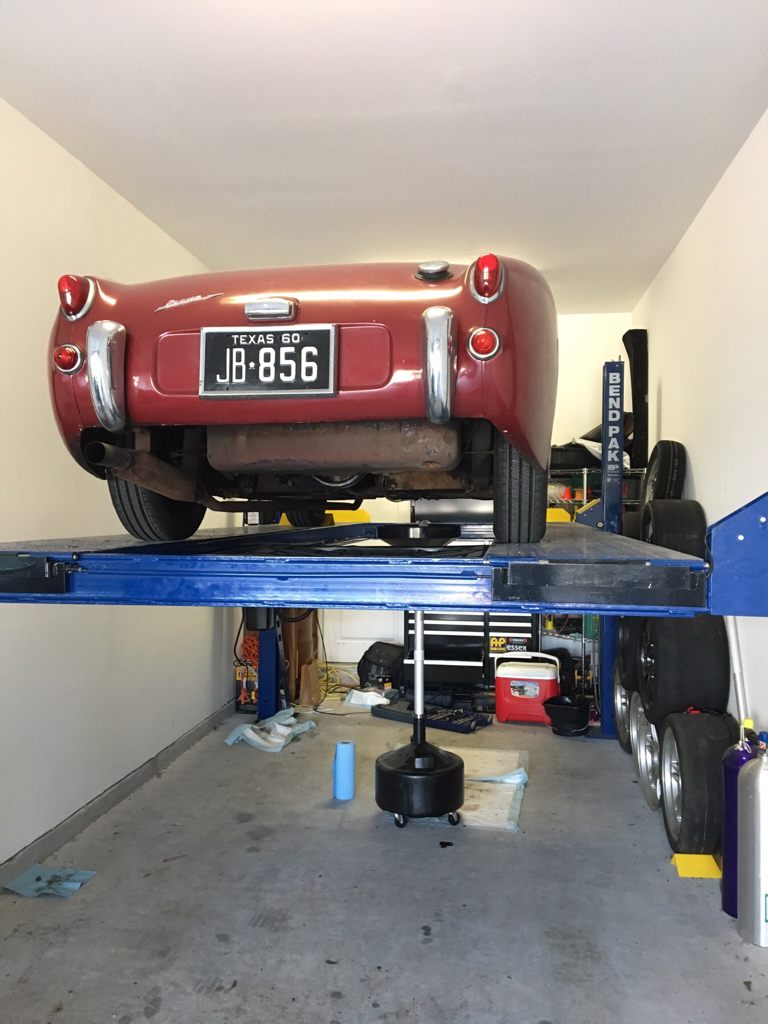 Put the Sprite up on the lift today add gave it its first oil change in probably a decade (judging from the service records). 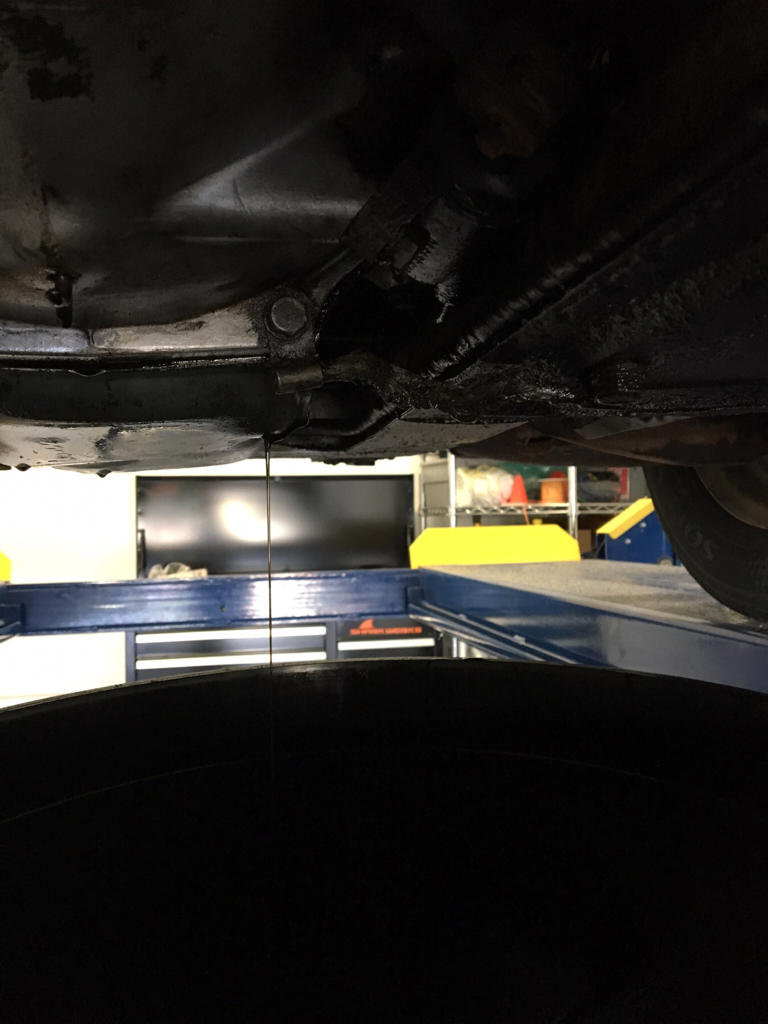 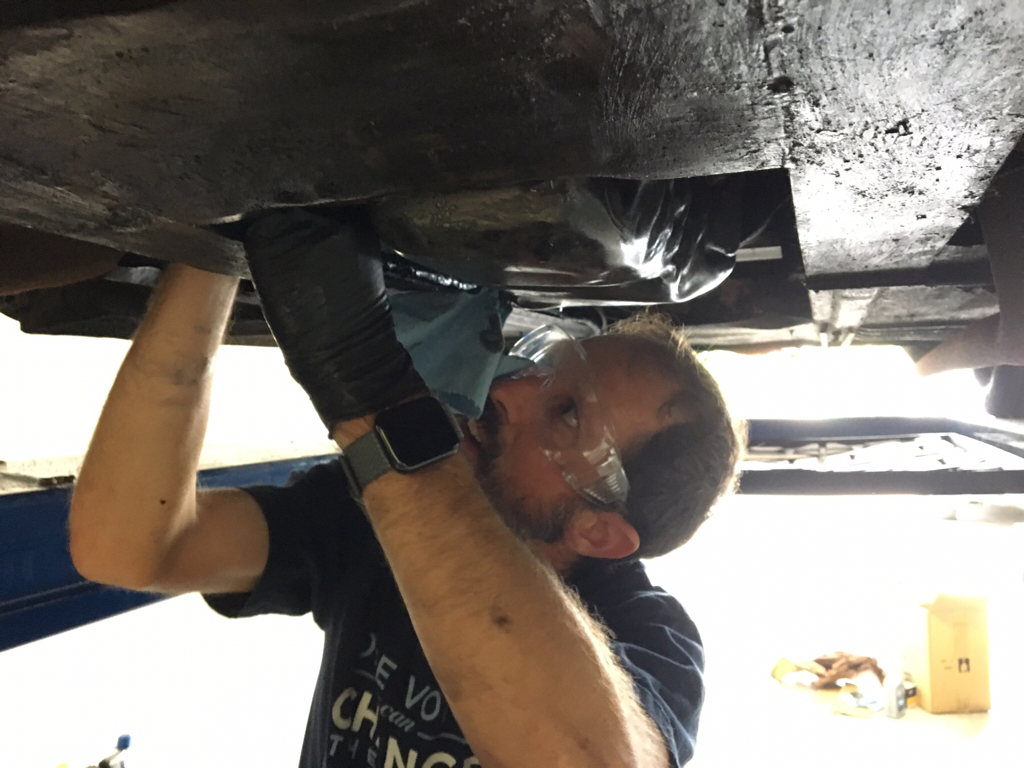 The oil filter was a huge hassle, but everything went to plan. 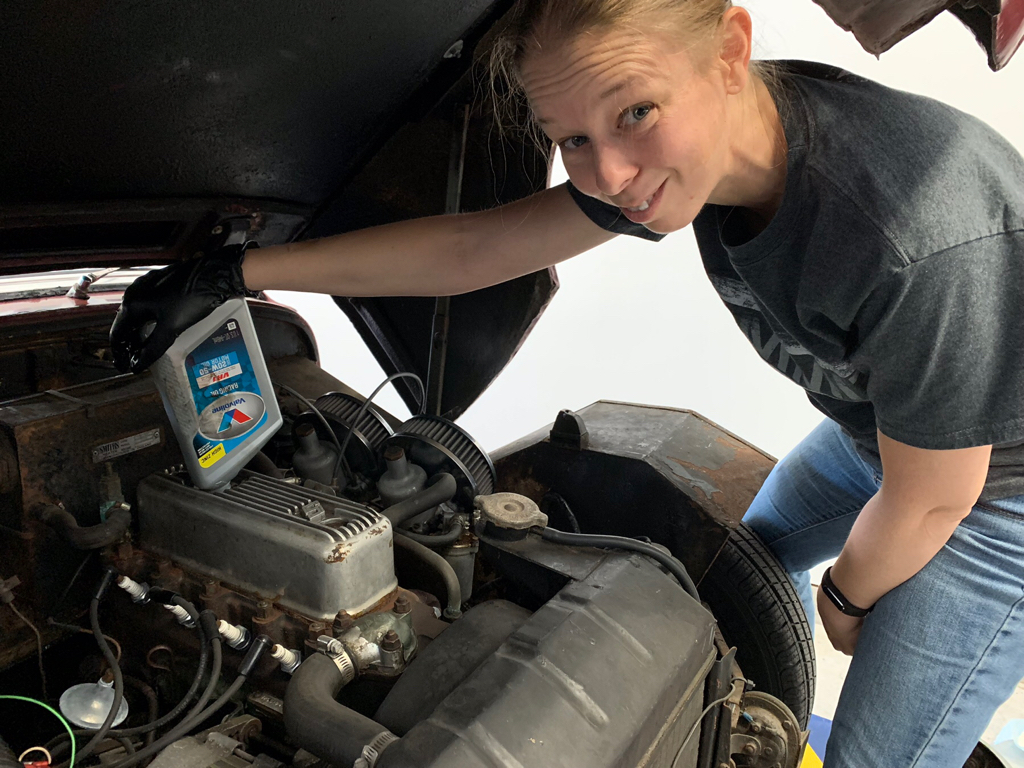 Just shy of four quarts in and the car sounds so much smoother now, which was unexpected. 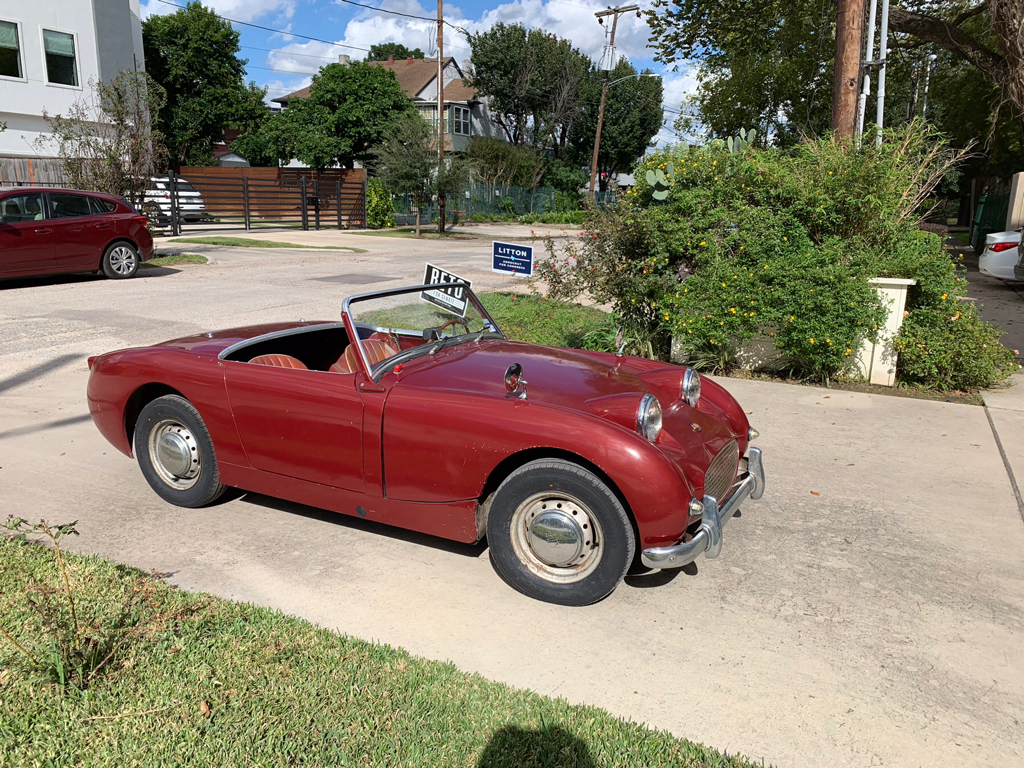 Over the summer we did a brake fluid flush and fill on the car, which wasn't really interesting enough to warrant a post to the thread. I also got an email from the local MG car club. They'd noticed that we had joined as new members and then never managed to show up to any of their monthly meetings. It turns out this is a common occurrence with British car owners who have cars that may or may not be reliable enough to make it out to the meeting location (which is way out in the 'burbs here in Houston). They offered to come to us -- and the caravan of bearded MG car freaks showed up last Saturday morning at our house to poke at the Sprite and commiserate.

Naturally the car didn't start when they first showed up (although we did eventually get it started) and it was an enjoyable time learning and chatting with our fellow car geeks and compatriots. One of the visitors left us with a puzzling carb tuning kit with the promise that we'd put it to good use and then return it to him at the next meetup. So, this weekend we did a complete overhaul of the SU HS2 carbs that are on the car. This involved some new tools and a lot of scary disassembly. We took the carburetors off the car:

... and completely disassembled them...

Then we cleaned every single part in an ultrasonic cleaner:

This was shockingly more effective than I expected it to be. Like, seriously effective. This is a good tool to have.

Sunday we had the car put back together and running again (albeit roughly) which I consider a complete and total victory considering neither of us really knew what we were doing. It was an intimidating task, but with the help of our shop manuals and a handful of youtube videos we muddled through it.

Today we set to work with the tuning kit and after about four hours of fiddling I can honestly say the car has never run better. We synchronized the flow rate across the two carbs, tuned the idle, and got it running really smoothly with an appropriate idle speed. The car feels great now! We drove over to the local park to celebrate.

Now we've got a new issue, though. It was a balmy 38ºC when we went on our road trip and the car was super crazy unhappy with the heat (especially in stop-and-go traffic). We had to hang out at the park for a bit to allow the engine to cool down enough to make the drive back. So I just ordered an aluminum radiator and that's the next project on our list.

Awesome! Glad the club came in with the assist and that you all managed to get the little Bugeye running right

Happy car is happy, and props to you guys for tackling the carb refurb. For me that would fall into the category "I could have a go but if (when!) it goes pear-shaped it will get expensive."

They're crazy. I was so skeptical at first but the results were far beyond what I expected. Seeing the tendrils of gunk and ooze spiraling up off the parts the second we hit "start" on the cleaner was amazing. We just used Dawn dish soap and it did a great job.

OOOOOOOH. Can I borrow this cleaner? Haha. Who knows what's in the menagerie of VW carbs I've got lying around...

ninjacoco said:
OOOOOOOH. Can I borrow this cleaner? Haha. Who knows what's in the menagerie of VW carbs I've got lying around...
Click to expand...

Check with Der Stig and Nabster, they have one as well. A surprisingly large one.

Emboldened by our success with the carb cleaning, the next thing we decided to work on is the cooling system. In stop and go traffic the engine temps can really get out of hand quickly.

This past weekend we swapped the old radiator for a new aluminum unit which is advertised to be much more effective. In removing the old radiator we found that it was definitely full of many years of build up and rusty silt, too, so I'm sure it wasn't operating at its original capacity. We also proactively swapped in a new water pump at the same time.

We also tried to swap to a different thermostat, but we were thwarted because it appears someone used JB weld or an equivalent adhesive to secure the thermostat cover which bolts on to the top of the engine block. I'm guessing a previous service shop didn't have the correct gasket and made a poor choice. Even banging with a rubber mallet doesn't get the cover to budge, so I think our next step may be to apply heat from a torch, acetone, or more brute force. Not quite sure yet. I don't suspect that the thermostat is damaged, so we might just forgo the swap. The cover is very corroded, though, at the neck where it attaches to the coolant tubing. It would be comforting to replace it with a fully-formed pipe.

We did manage to do some damage during the process by accidentally snapping the feeder line which leads to the coolant temperature gauge. It doesn't seem like it's user-repairable once you've lost the ether so I've had to order a new dashboard gauge so we can restore our ability to monitor the coolant temp. 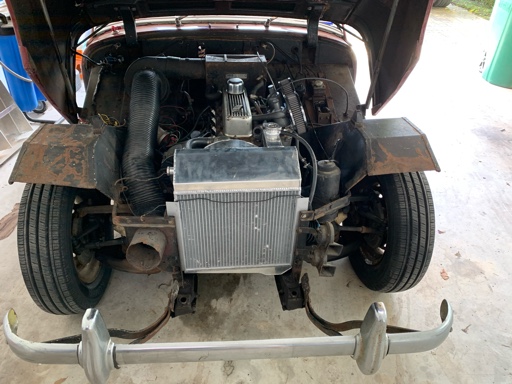 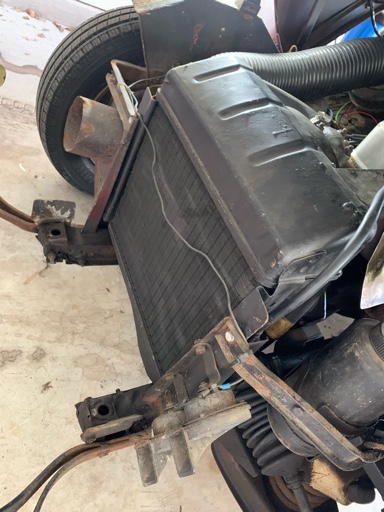 Here you can see the corroded thermostat cover housing. It has definitely seen better days: 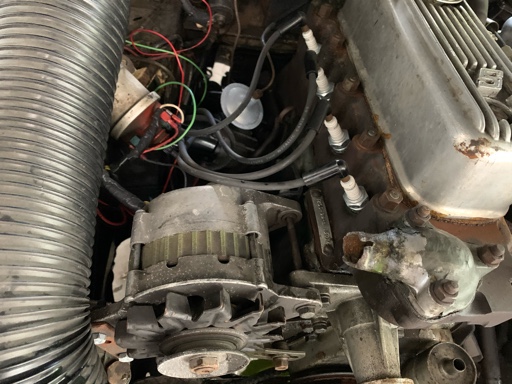 I’m tied up this weekend running an ultramarathon and next weekend we are hosting a guest out at the track in Austin, so it will be a few weeks before we can wrap this job up.

It's been a touch-and-go process trying to detach the thermostat housing from the engine block. We tried banging on it (if brute force doesn't work you didn't use enough of it). That failed. We tried heating it with a propane torch. That failed. We tried heating it even more with a MAPP gas torch. That also failed. Finally we were able to bang the housing off with a big hammer and a sacrificial pocket knife. After some minor cleanup we were able to replace the thermostat, mount the new gasket and housing, and also replace the multi-gauge and temperature probe into the new aluminum radiator. Topped it up with water and Water Wetter and we were all good to go. Yesterday we had the car running again and it made it out and back under its own power for a fuel stop and to get ice cream. I'm so chuffed to have it running again!

Well done! That thermostat housing was in truly shocking condition.

Whatever you do, don't put a rotary in it.

argatoga said:
Whatever you do, don't put a rotary in it.
Click to expand...