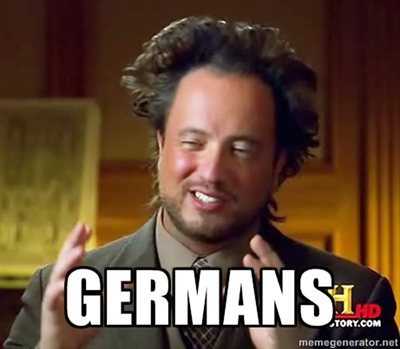 The crane company where I made my bachelor thesis started this trick years ago: But I must admit, that Liebherr took it to the... not only next level but to the insane. Thats truly awesome. Damn I loved working with these cranes. Damn I've so many awesome pictures with cranes with like 2800 metric tons on the hook, or me in front of the hook which weighs 90 tons alone. But... as awesome as it is imo, I'm not allowed to post it

PS: Refering to the "German" thing. Terex is an American company, but it was a German company before Terex bought it
Last edited: Jul 4, 2012

On a sidenote seeing that dinosaur-like crane before presumably eating his little brother ... is the name "Terex" a pun on T-rex?

That woman deserves a purple heart, or what ever the equivalent medal for tennis-line judges are ... and a parade. Give that woman a parade!
Last edited: Jul 4, 2012

Panda awareness week, why was I not told!!!

Aston Martin said:
Panda awareness week, why was I not told!!!
Click to expand...

Interrobang said:
On a sidenote seeing that dinosaur-like crane before presumably eating his little brother ... is the name "Terex" a pun on T-rex
Click to expand...

Goes to show how little they can see in those conditions. And those aren't even the fastest single-seaters in the world.

watch out for his name, he can be the next big one..

Ed Byrne (one of my favourite stand up comics) DVD Pedantic and Whimsical:

The awesome thread is not awesome enough for this...


Actually holy mother of god'd. All those CGI adverts? Fuck me they're not CGI. I need one of these robots nao.

Saw that on the afternoon news here. What a freaking psycho.