I downloaded the pilot of West Wing yesterday with mixed hopes and it turned out to be complete rubbish. Saying that I used Nip/Tuck on this thread to beat something after never seeing it b4. have since downloaded up to current episode. While I say I am not a fan of American TV my favorite TV shows are
Top Gear
Desperate Housewives
Nip/Tuck
Lost
In that order maybe I am a fan of American TV after all, American comedy works in a drama but sitcoms Yuck.

Sorry my rant is off topic.

Blind_Io said:
What? What? You must be joking. Seriously. Seinfeld? That half hour load of crap is better than what is widely considered to be the finest and most successful television show ever? The show that got more viewers for it's final episode in 1983 (about 3/4 of the population tuned in if I remember right) than Seinfeld did in 1998, despite there being more people with televisions in 1998. In fact, Alan Alda smugly pointed this out when he was on Leno following the final episode of Seinfeld.

Agreed. Mash PWNS Seinfeld, no question about it.
A man named Jeffy once said, "If laziness is craziness, then I've lost my marbles...and I don't feel like trying to find them." /still can't believe this game is going on.

Quote "The singer Mariah Carey, when asked to come down a flight of steps at a photocall, famously snapped back: "I don't do stairs."

Location
Sweden / About 50 km from the arctic circle

Saw mill > tread mill
"I was sad because I had no shoes, until I met a man who had no feet. So I said, ?Got any shoes you're not using??

Hippie environmentalist > loggers and their sawmill

"Hopefully once petrol hits $2.50 per litre all the 18 year olds with riced up Nismos wont be able to afford to drive their neon-clad tard rockets around at 200km/h anymore, and it will be back to the good old days of riding a donkey to school."

Any form of war > French (surrendering)

Sorry but it had to be done.

Most fitting on rememeance day. 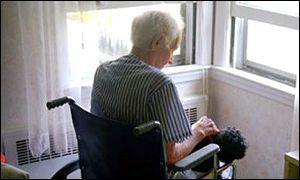 "Hopefully once petrol hits $2.50 per litre all the 18 year olds with riced up Nismos wont be able to afford to drive their neon-clad tard rockets around at 200km/h anymore, and it will be back to the good old days of riding a donkey to school."