No way! Added weight! And complexity. And weight! Does the seatpost spring back when you release cable tension? Like a suspension lock out? The rational for something like this is a bit lost to me. I thought there was a single ?right? post height for a person, so adaptability on a personal bike seems odd. Unless it?s 'higher' for road surfaces and 'lower' so you can absorb some shock in your legs on more uneven surfaces?

jibduh said:
No way! Added weight! And complexity. And weight! Does the seatpost spring back when you release cable tension? Like a suspension lock out? The rational for something like this is a bit lost to me. I thought there was a single ?right? post height for a person, so adaptability on a personal bike seems odd. Unless it?s 'higher' for road surfaces and 'lower' so you can absorb some shock in your legs on more uneven surfaces?
Click to expand...

Pretty much it. The post is air sprung with a hydraulic lever. It is amazing how much difference it makes. You can have the seat right up for a flat section and then drop it out of the way for a rough downhill. It is infinitely adjustable in the travel so can be dropped just a little bit for a technical climb. Also makes the bike easier to get on and off as it can be dropped right down as you come to a stop.

Thanks. I guess I can talk myself through it, even if I can't convince myself that it's a worthwhile option. preferences and such.

Saw this on another forum: 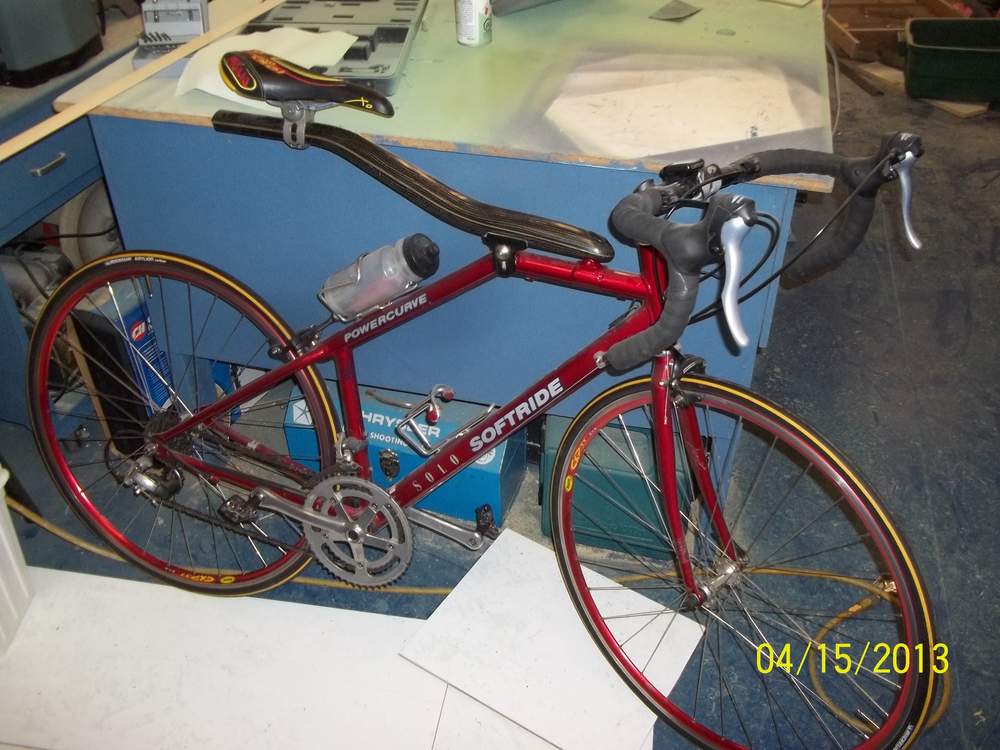 Anyone seen this before? Looks pretty comfortable; if you ponder on the mounting of the seat it makes good sense. I would liken a seat mounted by a vertical post (like every bike) similar to a woman's stiletto heel shoe, all of the energy is transferred to a small area and thus to the user.

In other news, I was very keen to go on a bike ride Sunday until I discovered my front tire had a chunk of glass embedded in it. The upside is that I never left the house because I always pump up my tires before leaving and take the pump with me (though I leave it in the car). So, I was spared driving 25 miles round trip for nothing. I used to change out my tubes and whatnot, but for $15 parts and labor I'll let someone else do it.
Last edited: Apr 16, 2013
LET | FOREVER | BE

those tires look a bit wider then the usual road bike tires.
speaking of which, I had a nice flat surprise today when I came to get the bike in
the garage. so no ride today. have to buy new ones sooner then expected.

So I was after a cheap crummy folding mountain bike to throw into the car.
Now decided it's easier and cheaper to throw a bmx into the car. Looking at under ?50, that way if I chain it up outside a pub and it gets stolen, it doesn't matter.

Went to a cycle shop yesterday, they had loads of cheap used mountain bikes outside. I went inside, the guy working there said "Yeah you're quite tall you might be better off with a bigger frame." They had a nice bike down from ?435 to ?249, I liked it alot. Loved the slightly bigger size, but don't wanna pay that much for something thats gonna get abused.

He showed me his personal bike, which he said he had spent a ?1000 on. It looked great, but I couldn't tell the difference between that and his ?400 bikes.

Looking at buying a tatty Raleigh Traveller from eBay, ?110 once you factor in delivery but old road bikes have jumped up in value now everybody wants a fixie project.

I want something to pop around town with as I keep using my car which is unhealthy for the engine and my fuel consumption, and my health.


Hehe, you mean personalised towards me?

This thing is seriously awesome though. It collects huge amounts of data, everything works flawlessly. Battery life is as promised (20 hours with GPS and no Glonass, 15 hours with the backlight always turned on)... Haven't gotten any weather alerts from it so far, but then I didn't run into any thunderstorms so far. Also, I usually check the weather beforehand and where I ride, it isn't that likely to change at a moments notice...

That Cannondale still looks good. The wider tires might be 25s instead of 23s? Supposedly 99,5% of the speed with 50% more comfort... I might try them when my current ones are worn out. I recommend Conti GrandPrix 4000S, btw. Lowest resistance, low weight, great anti puncture abilities!!!

Yep, the current rubber is a bit wide, but with these you can go over gravel roads parts without your wheels shooting off pebbles sideways into parked cars.
Btw: I hadn't a puncture in years.

Finally got my Belgian track bike ready, bought it early 2011 and haven't really put an effort into getting it done until now Somehow this seems like the sort of idea that will cost me a camera: 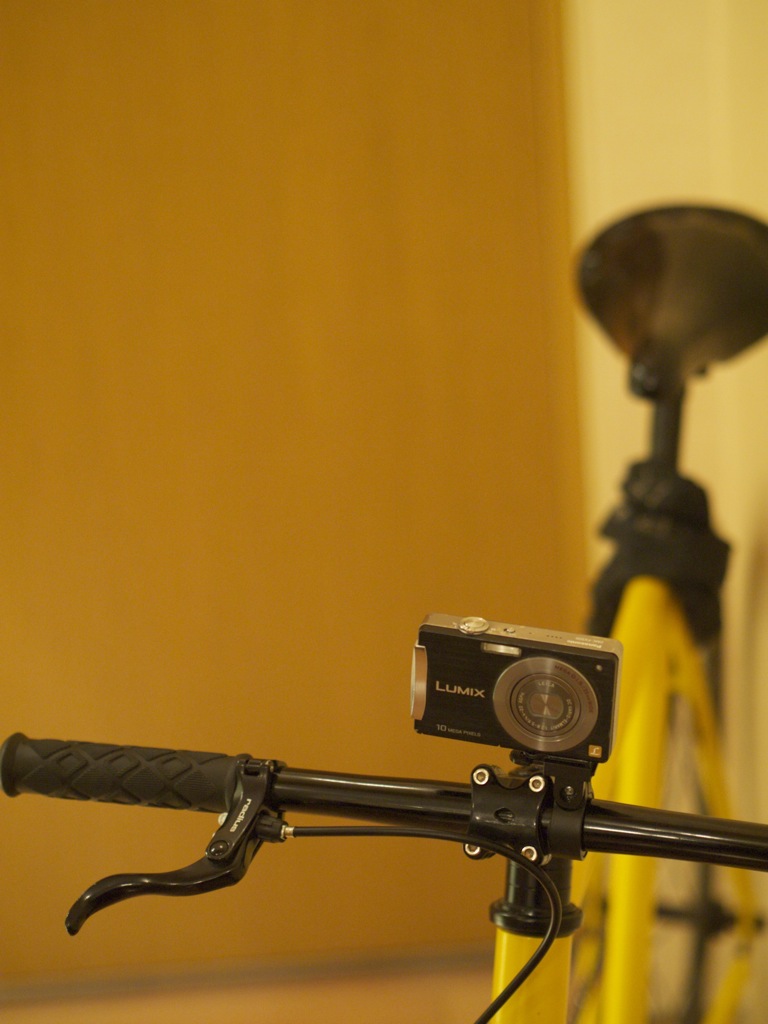 I've relocated the mount to the other side of the handlebar and reattached the wrist-wrap to the camera so I can secure it to my wrist. If the mount decides to let go like I expect it to at least I'll save the camera

If it works though, I'll have some pretty sweet videos of Beijing's traffic ^^

If you're still mounting the camera to the bike, I'd recommend attaching the strap to another mount point rather than your wrist. you don't want to become tangled up with both of them in a crash if everything holds.

That way, your camera still have two points of contact, but aren't tied to your bike like the old clips and straps

Fair enough, I think it's just going to be a one-time thing (I want to contribute to the "Take us for a drive in your country" thread, even if not in a car ^^) but I might as well do it properly

you could also set it up to record like a dash-cam for Russian style antics!

On my pic above you can see my Contour Roam mounted on the handlebar of the Cannondale. I have the cam always running.

Well, that went better than expected, the mount help up very well even though it's made of the worst grade of plastic imaginable, I will need to find some padding to stabilise the camera better though...

Aston Martin said:
So I was after a cheap crummy folding mountain bike to throw into the car.
Now decided it's easier and cheaper to throw a bmx into the car. Looking at under ?50
Click to expand...

So I saw a Diamond Back with mags on ebay starting at ?20, I sent him a cheeky message saying would he take 30?
He said no, he bought the mag wheels last month for 30.

I've seen many bikes on eBay and gumtree this week, but I really liked this one. I just won it as the only bidder for ?20.