ninjacoco was hanging around at Yeehaw, It's LeMons Texas 2010. I was driving a 1971 Volkswagen Type III Fastback, painted white at the time. Coco took one look at it and saw...

Yes, Coco saw a Puffalump bunny in something that looks very much like this: 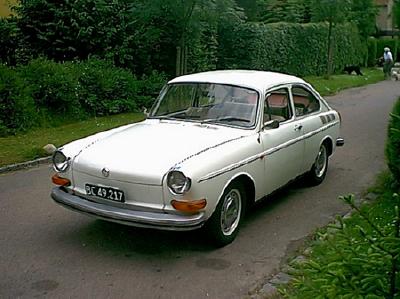 Coco kept telling us all about how the car was a stuffed bunny. She told me about it. She told spicysaurus. She told Bo, the car's owner, about it. It was a cute idea, one of those things you talk about, laugh about, and move on.

A few weeks after the race, I got a phone call from Bo. "I fixed the car," he said. It had been running poorly and annoying me endlessly. It was not a fun drive it LeMons, with the backfires, misfires, power loss, etc. One part, and now it's running beautifully. He even said it was fun to drive...

I remembered Coco and her puffalump...

This particular Type III was once green, and then blue. Then, somehow, it made its way into Bo's life, where its interior was stripped, it gained a roll cage and various other parts, and turned silver, with Sharpie lines, a head, and a tail... It became an armadillo. It ran in YeeHaw, It's LeMons Texas 2009 as the 'Dillo, number 110. Unfortunately, it was struck from behind. The motor mounts didn't hold, and the transmission couldn't take it. The car was out of the race. It was abandoned with disgust to the Harris Hill Road garage. At some point, a Type I transmission and Type IV engine were similarly abandoned with disgust - the engine was puking oil. Bo put the transmission and engine in the car, and as this LeMons race approached, he decided it was time to revive the 'Dillo. He couldn't find the oil leak, so he just rebuilt the engine. Miraculously, that worked, the oil leak was gone. So the car was to head to LeMons again, but one of our drivers couldn't stand the horrible look of the silver with Sharpie. So he and his wife took white spray paint to the car and it gained a whole new look.

The car went from this: 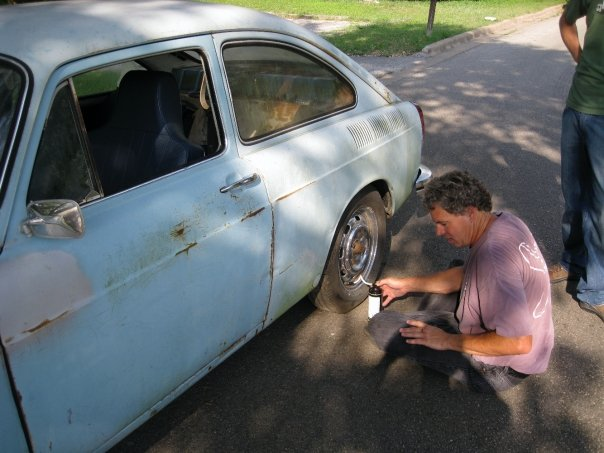 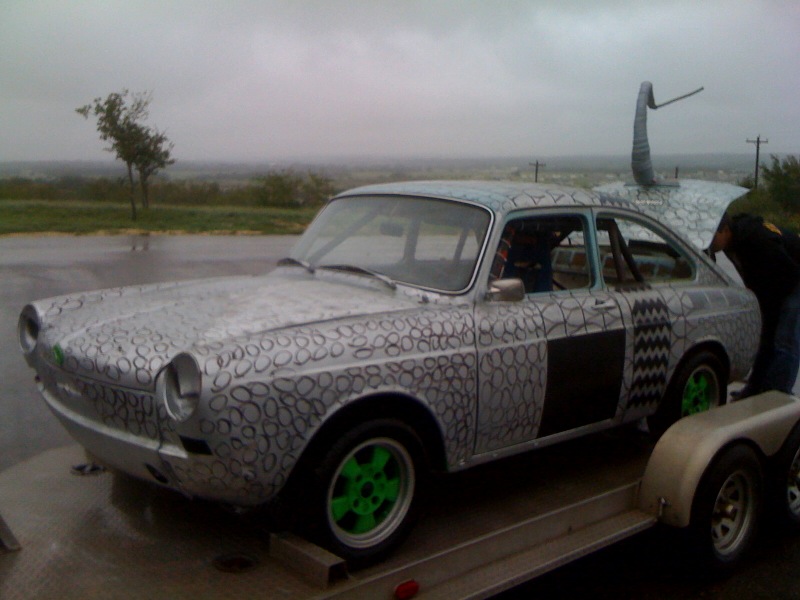 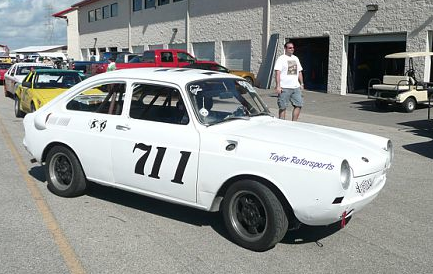 Coco has some work ahead of her to turn it into a puffalump, but I'm sure she can do it! Somewhere along the way, we decided a stuffed bunny rabbit car should have an all-not-a-dude driver team. Well... we have me... And... um... probably Spicy... And... um... well, can coco learn to drive stick in time? I think I have a coworker signed on... But we could use another few drivers.

Oh, and what do we do when it breaks mid-race?! None of us, not a one of the four, knows enough to keep this kind of old heap running. Maybe we can get Bo to keep it going, but he may be playing with his Maserati that day (oh, yes, Bo is building a Maserati BiTurbo for LeMons/Chump).

What will our team name be? How will the car get to MSR-H? Does it need new tires? What do I not know that I need to?!?!
Flying Horse Racing

Heh, I thought it was more of a Killer Rabbit at first.

Keep the Holy Hand Grenades away!

The other team probably wants to move on from the Black Knight theme, though, so this Puffalump idea...works.

Fluffy Bunny Racing, perhaps? That is that particular bunny's name, you know.


Well, it'll be more of a MS Paint job unless I decide to hijack one of the computers at school, but I need to find an ample break in midterms first.

Unless of course you want Finalgear South

I have just become a fan of the not-a-dude fluffy bunny team for LeMons
Going fast out of rage, pride or boredom is like buying a ticket to crash.

Erm, ahem, credit where credit's due?
WillDAQ: To use the technical terms: "the Mustang is to aerodynamics what horse shit is to fine dining"

Hey, MWF, if you're expecting me to remember all the details after running an enduro in the Texas summer, you think I'm far more capable than I am.
Flying Horse Racing

I was kidding!
WillDAQ: To use the technical terms: "the Mustang is to aerodynamics what horse shit is to fine dining"

If anything, the credit for getting the "bug up my butt" that drove me to actually put the team together goes to Cam. He said the car was fun to drive after Bo fixed the power issue. Fun to drive. That heap. I do not believe it. So I'm going to amass a collection of not-a-dudes, brainwash them, and get them all to agree that the VW is not that fun to drive! Epic fail in 3... 2... 1...

On an entirely unrelated topic... MWF, Yuuki, the kitten, absolutely loves your avatar and wants to claw it into tiny little pieces.
Flying Horse Racing

Labcoatguy said:
Can cross-dressing dudes apply if there's room on the team?
Click to expand...


Do you have the moobs for it?

Anyway my original thought was that the VW could be turned, with little effort, into The Flying Puffalump run by Team Not a Dude. Not sure but I suspect it might have been Coco who suggested that the all-male pit crew should spend the whole event dressed as Playboy bunnies. Fortunately as I have no skill whatsoever in auto mechanics I was able to decline that without losing any face.

And of course between now and then Coco needs to learn to drive a stick..... so drivers in Texas be warned. And Arkansas, Louisiana, New Mexico, Oklahoma......
WillDAQ: To use the technical terms: "the Mustang is to aerodynamics what horse shit is to fine dining"

Coco has already passed lesson one, and drove my car home from dinner! Lesson 2 will include more careful clutch work (likely not in my car) and more work on finding appropriate gears. We'll see how she handles gear selection, and eventually move her to a LeMons-quality transmission (be in the Autobianchi or the VW). She's been doing great.
Flying Horse Racing

In that case go Coco!
WillDAQ: To use the technical terms: "the Mustang is to aerodynamics what horse shit is to fine dining"

Mineworksfine said:
Not sure but I suspect it might have been Coco who suggested that the all-male pit crew should spend the whole event dressed as Playboy bunnies.
Click to expand...


In that case I'd better start hitting the gym. I am a fair hand at mechanical work, and my parents live in TX now so I go by there fairly often, so consider this post my application to possibly join. In fact, depending on when the next race is, I can see if my sister, who doesn't drive stick yet but once tried to learn on my last MR2, might be interested.
"Power corrupts. Lack of power corrupts absolutely."
-Redliner, ironically

Wow, I'd be up for this. I had the wagon version of this as my first car- and drove it everywhere till it died. I've gone to several driver skills autocrosses and a couple of track days with the beemer wagon, and I drive on the freeway a lot, which I think would be good prep for LeMons from what I've seen. I do live in the great "Northwet" which makes getting to most of the races somewhat difficult, but where there's a will there's a way, especially if the pit crew is guys in bunny costumes!
Proud owner of a pair of Nomex socks

That was a pass?! I don't want to know what a fail would've involved, then.

Not gonna lie, I kind of want to go after Organizer's Choice in terms of "ridiculousness of theme." Those bunny ears better be on most of the weekend, not unlike how the Clown Car guys showed up to the drivers' meeting in wigs. Tails optional, but encouraged. Anyone up for bunny hopping for BS inspection? If it is in February or March, all the Easter stuff will be out in stores. Bribes in eggs and/or baskets, anyone? Can anyone cook a wabbit stew?

I wonder if Build-a-Bear has a little bunny-sized racing suit?
Last edited: Oct 5, 2010