I don't think you can take even half of what Clarkson says, seriously. He's been around this business for almost 20 years now, so he can pretty much say what he wants. With fifth gear I would suppose it is a different matter.
If they lambast a car, chances are that they'll be on the black list of that manufacturer and with them being a strict car show it could be very bad. I noticed that with German car shows (which in general are less entertaining than watching paint dry). Even if they have criticism about cars, they critisize but try to find a positive argument immediately afterwards. I've never seen any car show that really thrashed a car, except Top Gear.
And that makes sense, for Top Gear the cars are just entertainement bits, something to fill the time between cocking-about and the SIARPC. Thats why they mainly look at cars that we mere mortals will never lay hand on anyways. I happened to watch some episodes from series 1 were they were looking at things like Ford Focus, Scoobies and whatnot, but in comparison to Series 10 despite all of Jezza's efforts, it was still dull as ditch-water.
If you go for a realistic review, watch Fifth Gear, if you want to see the thing being thrashed around by a loonatic, watch Top Gear

lukenwolf said:
I don't think you can take even half of what Clarkson says, seriously. He's been around this business for almost 20 years now, so he can pretty much say what he wants.
Click to expand...

I think you can, for the exact same reason you posted. He has been in the business for an awfully long time, driven hundreds of cars, and Top Gear aside, he is still a motoring journalist and one of the few who actually writes what he thinks. I think there is (obviously) a lot of exaggeration in his comments, but there must be some truth behind all that. He's at the stage where he doesn't have to say nice things about a car just to impress people and hang onto his job.
??​

Most of the motoring journalists over here seem to love every car they drive.. they're far too nice. For example, there was this stupid women who reviewed the Toyota Tarago/Previa. Man, was that a crap review.. half of it was complaining about how this V6 Tarago was more powerful than her 4 pot, older one (No kidding?!)

Jeremy has a very unique style. Different journalists put different emphasis on different points. I do enjoy reading Jeremy's articles as he provides a different perspective on certain cars. I don't consider his opinion serious journalism though, he has too much prejudice.

I watch Top Gear for fun, if I want proper car reviews I read Wheels or Evo.
"There were no speed limits then, because homosexuality hadn't been invented yet" - J. Clarkson

I just have to say, that is the best ad ever :lol:

Plato did complain about the understeer... But not as much as Clarkson did..

Karoug said:
Plato did complain about the understeer... But not as much as Clarkson did..
Click to expand...

Plato complained more about catching on fire than Clarkson did too, so it evens out.

epp_b said:
^ That's not an Impreza, that's an Accord in drag masquerading as one

This is an Impreza: 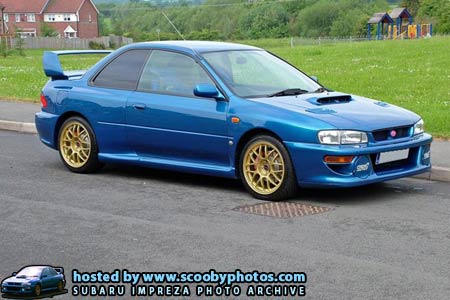