Cleaning Something Up - Matt2000's Childhood Vacuum Cleaner Obsession Comes to 2020

I've decided that I don't give a fuck if you all think I'm a massive nerd for liking vacuums as a kid, I was just interested in physics before my time...

As a child I used to be scared that my mother would run my feet over with the vacuum we had but somehow at the same time I was fascinated by them and would probably spend more time looking at them in the local electronics shop than I would any particular type of toy in Toys R Us. When I was 3 I wanted a particular handheld vacuum for Christmas and like lunatics my parents bought it for me, I've posted this picture before somewhere but here it is again:

So that's the answer to the cryptic picture I posted, it's the bag from this thing, some 26+ years on. Now the Smart is gone I can get to shit in the garage, while making a pile of scrap metal (I have five spare Land Rover propshafts) I dug this out. The bag was covered in white mould but a brush and a convenient breeze took care of that.

I tested the motor and it worked fine, time for a bit of restoration then.

Brush roll and belt were cleaned, the brush roll got lubricated and the belt was treated with rubber care stuff. It's still good enough after all this time. This is when I realised that the silver brush roll is not metal but is painted wood.

Brush roll guard floor metal thingy was next, it had a little surface rust so that was treated and then I polished it with Autosol...

Brush roll reinstalled, belt on. Apparently it ran in a particular position before but it doesn't want to go back there, it works fine though and doesn't throw off the belt.

The belt loops over the spindle of the impeller fan, which in turn is connected to the motor. Everything this little machine picks up goes through the fan and if you had particularly long fingers you could make them significantly shorter by sticking them in there when it's running.

Cap goes on or it'll have bugger all suction, then it went back together and I went as far as polishing the plastic to remove some of the fine scratches...

I can find nothing about this online, although the box suggests it was available all over Europe.

I'm disgusted to see it's made in the USA, they didn't apply the sticker too well. There was a British company called Goblin that also made vacuums so with similar names maybe I just assumed. Maybe I didn't understand the idea of importing things at the time...

Anyway the bag was washed and reunited with the front bit. I think the washing took some of the colour out of the fabric but it was unavoidable as it was nasty. These things have a really long cable, primarily so you can clean a set of stairs with it plugged in at the top or bottom.

Nailed together in Ohio. Ooh.

The box hasn't fared so well, it was never very strong to start with and it as never stored very carefully. Official sponsor of McLaren, but their logo doesn't appear on the cars anywhere. Not that I can see at least.

Apparently this was connected to a competition to win tickets to the Australian GP, presumably in 1994. Brown parcel tape peels off the print if I remove it so it's staying put.

Lid has Mario Andretti in his car on it. Always loved that McLaren livery but I'm more of a Mansell fan when it comes to drivers.

Delicious information. I still have most of the accessories with it and the strange pipe is somewhere. It plugs in to the hole at the front without any way of blocking the base, so to get any suction you have to hold the thing down on a flat surface like our man is doing in the third image.

Well there you go, if you ever see a small child interested in vacuum cleaners then be careful because they may end up with an addiction to Land Rovers or something...
Last edited: Jun 23, 2020

Matt2000 said:
Well there you go, if you ever see a small child interested in vacuum cleaners then be careful because they may end up with an addiction to Land Rovers or something...
Click to expand...

Or automotive things in general. The call of a vacuum cleaner to a young child is quite primal in nature..

I was terrified of mine because of that scene from Mr. Mom.


Which didn't really make sense because our vacuum was nothing like that old vintage one in the movie. This may not be exactly what we had, I think ours had a brown lid for the accessory tray, but it's more or less a match. 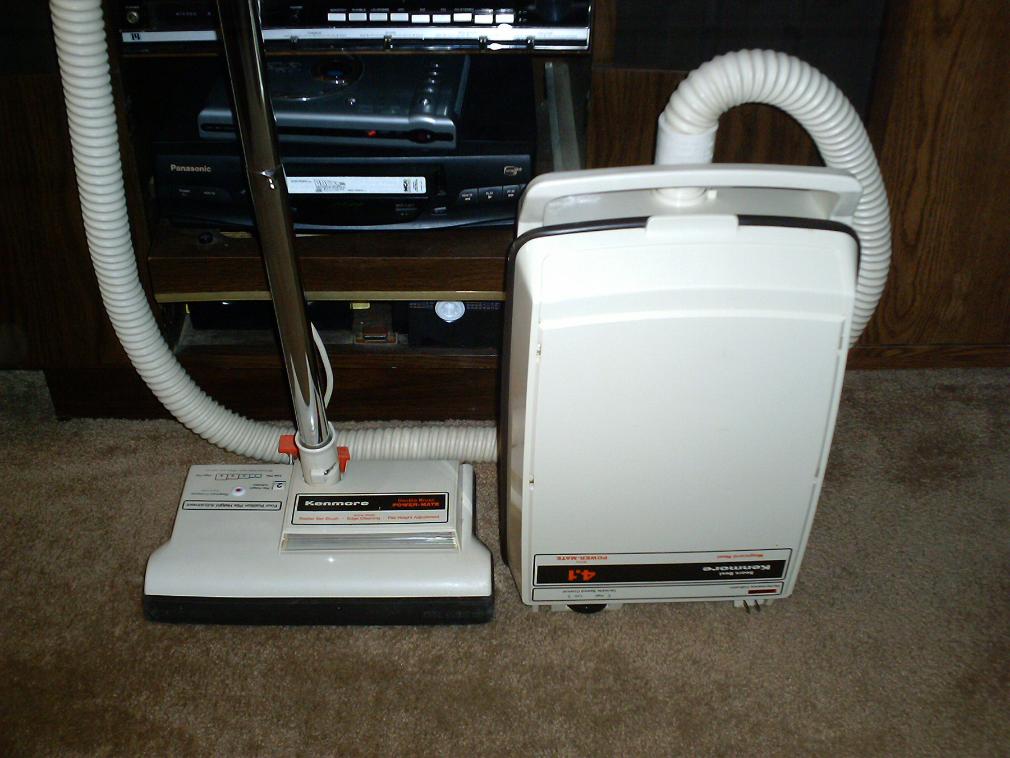 Had several different units over the years but one that really sticks with me was a Phantom Thunder, that fucking thing just chewed through belts, I actually started buying them in bulk so I'd have one on hand because it happened so often. You know how hardcore military guys can hang upside down blindfolded and disassemble, clean, then reassemble their weapon or a really fine tuned pit crew can change a tire in 5 seconds? That was me replacing belts on it.

Got a nice Dyson back in 2008 and it didn't give me a lick of trouble until this past Thanksgiving when it decided to have a stroke that morning and refuse to work. I had to make an hour round trip to go borrow my aunt's so I could finish tidying up before starting on the cooking. Later on I got it apart, fuck your torq bits, and got it working again.
The Mighty Buick Of Destruction.

And is awesome.
WillDAQ: To use the technical terms: "the Mustang is to aerodynamics what horse shit is to fine dining"

That scene is terrifying, I can see why you'd be scared. For me it was the threat of having my toes chewed off by the brush roll, my mum always had upright cleaners, I don't think I would've cared if she had a Henry or another cylinder cleaner. The cylinder cleaner with the motorised brush looks interesting, I always thought that was a more recent invention. Can't imagine using something without a spinning brush.

I'm to blame for my grandparents buying a Dyson DC01 in 96 or 97, I pretty much sold it to them when they were looking for a replacement for what I think was an an old Hoover with a fabric bag. The smell of that dusty old bag sticks with me, if I ever catch a similar whiff somewhere it takes me right back. Anyway the DC01 they bought was a limited Antarctic Solo edition in grey and blue, really nice machine that lasted for a very long time before actually falling apart due to so much use. I think the wheels were glued back on once. 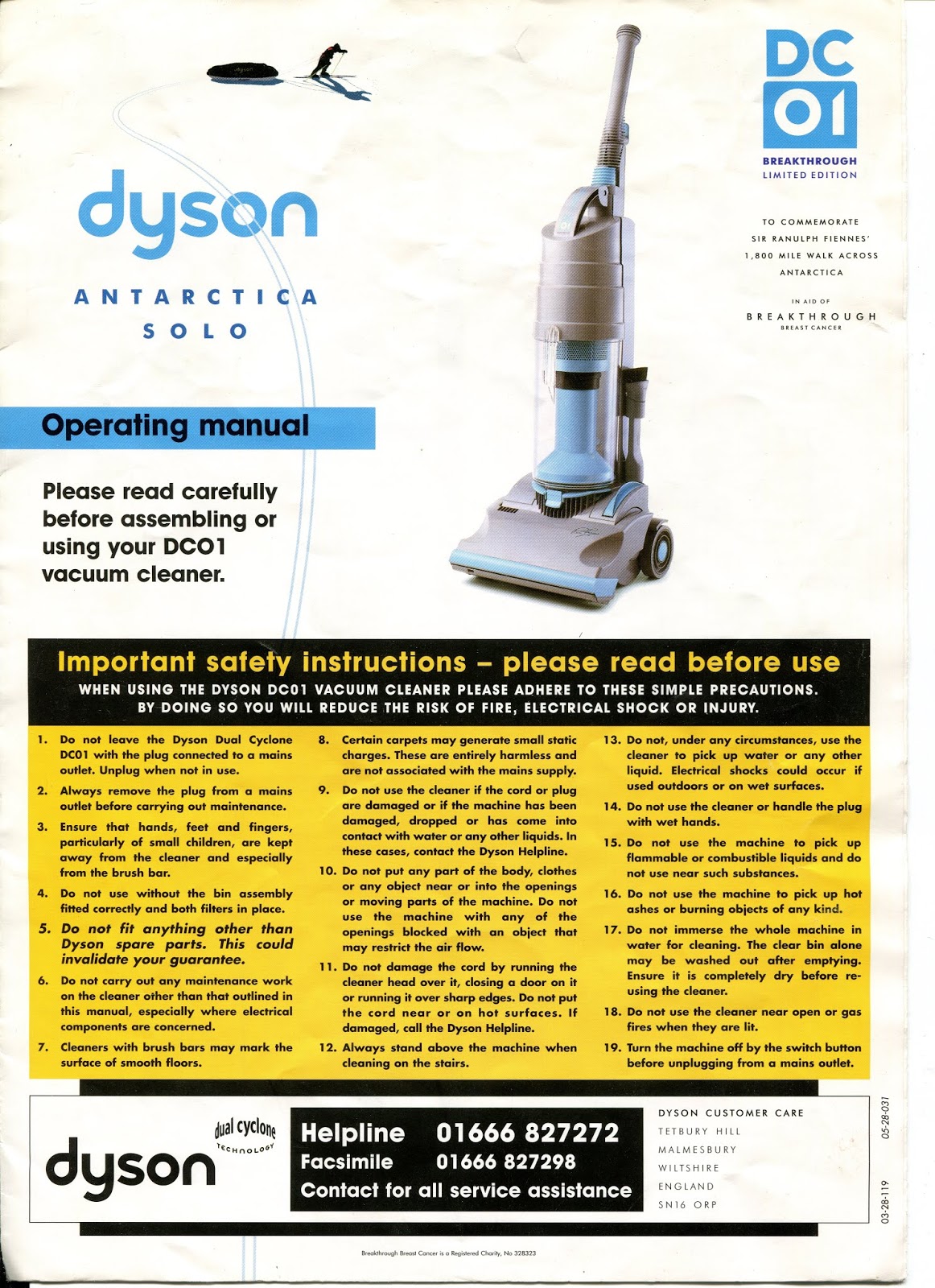 It was replaced with a Samsung which was crap and finally a Gtech which was nice and light for use in my Gran's later years.

I still believe that for 'normal' cleaners, Dyson are the one to buy. The Gtech (sold as Bissell in the US for some reason) cleaners are decent but the technology doesn't match and Shark do some stick cleaners with better brushes but their designs are too fiddly for me. I really like the new Outsize V11 stick vacuum, it finally has removable batteries. If you don't already watch Vacuum Wars, you should as he does a good job.


We're still using a V6 here and it's fine. The powered brush sometimes needs to be hooked up to my bench power supply to free it up, when it gets sticky the current limiter will kick in and stop the brush. Disassembling is dead easy and I don't think it even has Torx bits.

Still pleased with my 18V Bosch shop vac, the cheap adapter I got from eBay to allow me to use Makita batteries works great and after disassembling the hinged door mechanism I can leave the adapter on permanently and just slide the Makita batteries on. Container is well designed, it's basically a big plastic mixing bowl and it's super easy to clean out, plus the top goes on in any orientation. Much cheaper than the Makita equivalent too. It's powerful enough for a cordless cleaner but I won't be getting rid of my 1500W Aldi brand stainless can shop vac now I know of these new limits, that thing is a beast and happily vacuums the contents of a quarry out of Bob. Took the shitty wheels off (they just fell off most of the time) and it's much better.

OK so apparently the vacuum obsession never left me...

We have a Dyson but I will be looking at other brands when it dies, simply because he is an ardent Brexiteer. Same reason I avoid Wetherspoons even though their Eggs Benedict is heavenly.
WillDAQ: To use the technical terms: "the Mustang is to aerodynamics what horse shit is to fine dining"

The world would be a very boring place if we all bought the same things, I recommend checking out Shark. Very good for pet hair I understand and more keenly priced than Dysons.

Matt2000 said:
The world would be a very boring place if we all bought the same things, I recommend checking out Shark. Very good for pet hair I understand and more keenly priced than Dysons.
Click to expand...

Depends I think. I have a Shark bagless. Of course bagless has it's own problems, it's good enough but I have hardwood floors throughout my house with just a few area rugs. Vacuuming once a week fills the container, but it's mostly dog hair. It's worked fine provided I keep the reusable filters clean which I just take outside and watch the fog of dust float through my yard after blowing it out with compressed air.