Dr_Grip said:
As my shrink put it: "It will take some weeks, maybe even some months, for people to realize they can safely invite friends over and have big parties again. But once they realized there will be no end to the parties for quite some time..."
Click to expand...

There is, of course, an xkcd for this. 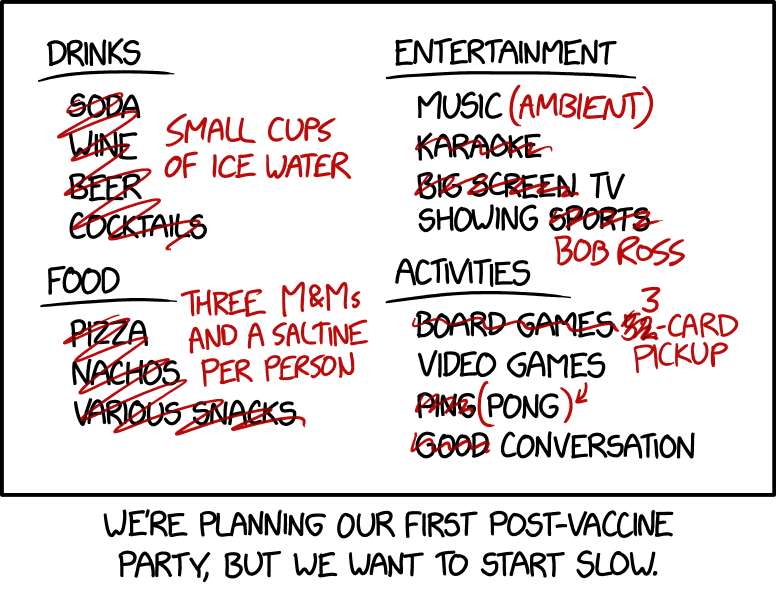 93Flareside said:
Our next task will be to figure out how to grow livers on a mass scale.
Click to expand...

Way ahead of you

As of a few hours ago, I have I feel like Windows Vista was under-rated by about 1/2. I suspect that will increase in 3 weeks, by another 1/2.
There is no such thing as a stupid question.* *but there are a lot of inquisitive idiots.

I bet the surprises nobody:

Trump’s former pandemic coordinator suggests that a restrained response may have cost hundreds of thousands of lives.

In interviews broadcast on CNN Sunday night, former President Donald J. Trump’s pandemic officials confirmed in stark and no uncertain terms what was already an open secret in Washington: The administration’s pandemic response was riddled with dysfunction, and the discord, untruths and infighting most likely cost many lives.

Dr. Deborah L. Birx, Mr. Trump’s coronavirus response coordinator, suggested that hundreds of thousands of Americans may have died needlessly, and Adm. Brett P. Giroir, the testing czar, said the administration had lied to the public about the availability of testing.
Click to expand... 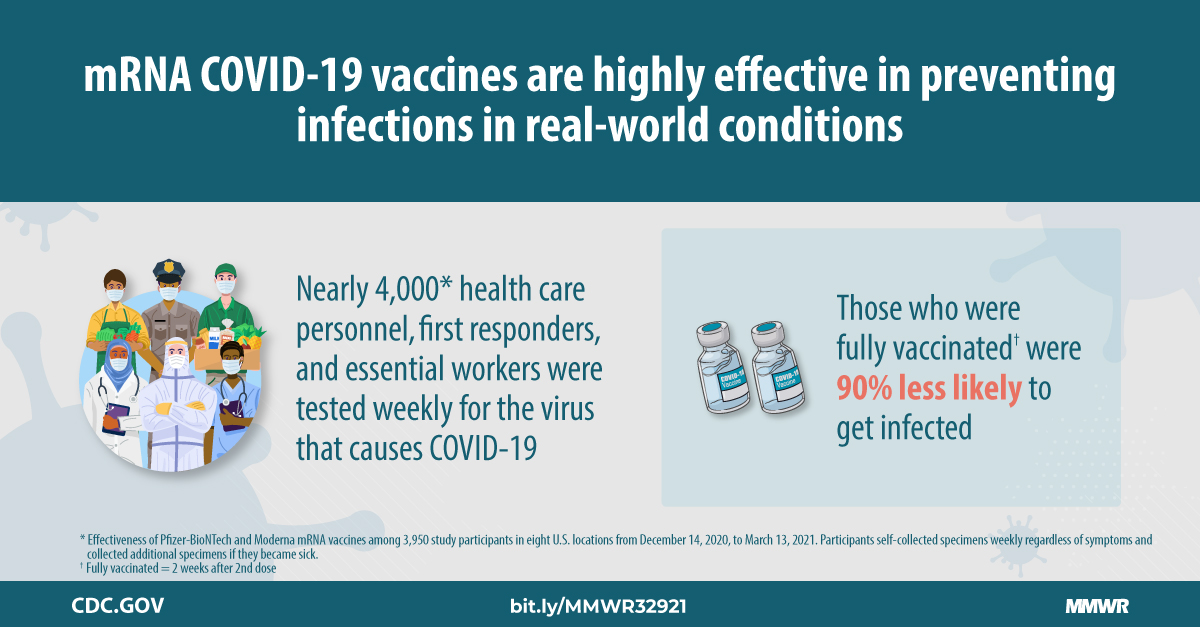 Interim Estimates of Vaccine Effectiveness of BNT162b2 and mRNA

I'm getting the 1st dose of Pfizer on Thursday. Will report back if my 5G reception improves.

Stat reports on a BioNTech vaccine study in children between 12 and 16.

Stat said:
Pfizer and BioNTech said Wednesday that their Covid-19 vaccine prevented symptomatic disease and was well-tolerated in a Phase 3 study of adolescents ages 12 to 15.

The companies say they will submit the data to [the EMA and] the Food and Drug Administration as an amendment to the vaccine’s emergency use authorization, and will also submit the results to other regulators around the world.
Click to expand...

This is brilliant, as it means we can have most kids beyond primary school vaccinated in time for the new school year.

Derek Lowe said:
[Science Mag reporter] Kupferschmidt passed on more information from Germany’s Paul-Ehrlich Institute just this morning. 2.7 million people have received the AZ/Oxford vaccine there, and 31 patients have been identified with cerebral venous thrombosis. Not all of those are HIT or VIPIT, though, because only 19 of the 31 had thrombocytopenia. There have been nine deaths, and as always, key questions are how many cases one would expect in the population that’s been dosed so far. Earlier this month, the figures were 1.7 million vaccinated and 7 cases of CVT, and the institute said that they would have expected about one case as normal background. The EMA, when they came out recommending the vaccine earlier this month, noted that figuring these background rates is not easy. But they found that if there is indeed an imbalance, it’s most noticeable in the younger age cohort and not in the older. The PEI mentioned today that of the 31 cases they have analyzed, 29 of them have been women, which certainly seems significant as well.
The UK experience with this vaccine has apparently shown no overall increase in thrombotic events – if anything, the vaccinated cohort has been slightly lower in that regard than the general population. But if there is an increased risk in people under 50, especially women, that’s actionable, as they say, even if the risk is very small (as it certainly appears to be).
Click to expand...

Last edited: Mar 31, 2021
Battered and weary after the craziness of the 1960s, the self-righteousness of the 1970s and the greed of the 1980s, I want to go home again, oh, so desperately - home to that land of drive-in restaurants and Chevy Bel-Airs, making out and rock 'n' roll and drag races and Studebakers, Elvis and James Dean and black leather jackets. Not that I ever owned a black leather jacket.
(Roger Ebert)

I took my mom to get her second round of vaccine on Monday morning, but we did have an issue come up. The guy who administered the shot copped a feel on her after he was done. He wrote down the time she could leave the observation area on a post it note and instead of putting it on her paperwork or handing it to me, I was right behind her pushing her wheelchair, he unannounced just slapped it on the top of her left breast.

My gut reaction was to just tear the guy's head off right then and there, but I didn't, I pushed her to the observation area and then asked if I could speak to a supervisor. I explained what had just happened and he talked to my mom and was very kind and apologetic about it, then he went over to have a talk with the guy.

Could have been totally innocent, but I really don't think so, there was no reason to put it on her chest like that. Even so, she felt violated and that's more than enough for me. I know I'm way off topic here, but I'm still stewing about it.

Other than that the whole thing went fine.
The Mighty Buick Of Destruction.

Covid cases in Israel are down to June 2020 levels, with the economy largely re-opened. The vaccination rate there is in the mid-50%.
The UK is more or less there at 46% (here the slightly lower baseline efficacy of AstraZeneca's vaccine may play a role), with the US and EU trailing at 29 and 12-ish percent, respectively.
Even in the EU, it'll only be a few more months - mid-50% are within reach during Q2. Hang in there, people!
Last edited: Apr 1, 2021
Battered and weary after the craziness of the 1960s, the self-righteousness of the 1970s and the greed of the 1980s, I want to go home again, oh, so desperately - home to that land of drive-in restaurants and Chevy Bel-Airs, making out and rock 'n' roll and drag races and Studebakers, Elvis and James Dean and black leather jackets. Not that I ever owned a black leather jacket.
(Roger Ebert)

My girlfriend and I had our appointment at the same time. She was in line ahead of me. She said she was asked at least 10 health questions, had to show insurance card, was offered the choice to get the record printed or emailed, and told where to pick up the print out. I was next in line, was only asked "left or right arm?", then told to sit in a chair for 15 minutes before leaving.

The next day I felt a little tired, and had a slight ringing in my opposite ear.

Follow-up dose is in 2 weeks.
There is no such thing as a stupid question.* *but there are a lot of inquisitive idiots.

Yup, this morning NYT shows 17%+ over two weeks ago, nationally.
I've always had an irrational fear of anamorphic armadillos.​

How are they doing in the "100 % open" states of Texas and Florida? I know the latter has had a problem with the spring breakers, but apart from that?

Here's the number of daily new cases for March in Florida

Texas daily new cases for the same period (please excuse the crudity of these graphs, I had to take them through screen capture. A fully interactive version is here)

Not quite the "running about like headless chickens" that everyone has predicted; even accounting for the usual massaging you expect any government to do. Were I to hazard a guess, it's because of 3 things

Not everyone matches the news panic pieces.

Texas may be 100% open but I still see most people acting as they have been for the last 9 months. Most stores still require masks, most people still realize it isn't over yet.

My county has hit more people vaccinated than have had confirmed cases.

Total population is around 2.6 million.

For those of you living in America, Office Depot/Office Max/Staples will laminate your vaccine card for free until July. I took ours up there today and because they couldn't actually laminate the originals because they have stickers on them, the lady just made copies and laminated those. Only took a few minutes.


https://media.officedepot.com/image/upload/v1616624545/content/od/tiles/2021/week_14/free_covid-19_lamination.pdf
The Mighty Buick Of Destruction.

Also, it's not just if the original has stickers on them, but they might be printed on thermal paper itself, which will turn black if heated (like most grocery store receipts, for example). You can test that by rubbing your fingernail on it to generate heat, and see if you leave a dark mark. If you do, definitely don't laminate. Mine's just on plain thick-ish paper. My Wisconsin cousin's is printed ON a thermal sticker, like from a shipping label printer.
There is no such thing as a stupid question.* *but there are a lot of inquisitive idiots.

hopefully I'm vaccinated by then, the closest office depot has signs in front "closing soon."