One of these things is not like the other.

From 15. July, I can travel to the countries in green without going into quarantine after I get back home. Roll on Ringmeet! 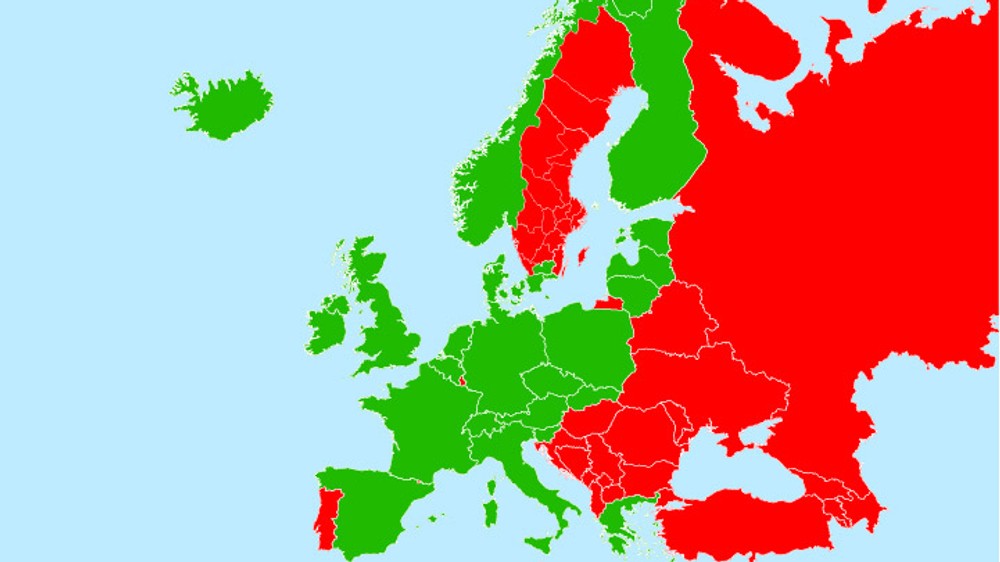 Yay! Ringmeet! Oh, wait, I'm in a "shithole country" and essentially a bipedal plague rat as far as most the EU is concerned.

Blind_Io said:
Yay! Ringmeet! Oh, wait, I'm in a "shithole country" and essentially a bipedal plague rat as far as most the EU is concerned.
Click to expand...

Yeah, I've been tired of the US bashing for 3 years now as well.
But you must admit that your marketing department has been extraordinary shit for the past 4 years or so.
The good news though is that it can't get any worse. Right?

TobiasG said:
Yeah, I've been tired of the US bashing for 3 years now as well.
But you must admit that your marketing department has been extraordinary shit for the past 4 years or so.
The good news though is that it can't get any worse. Right?
Click to expand...

As Richard would say after clarkson’s “how hard can be?” moments “Don’t say that!”

I guess politicians here know the majority have the memory of goldfish and the right wing has historically played on emotions over anything else know their rhetoric will work.

TobiasG said:
Yeah, I've been tired of the US bashing for 3 years now as well.
Click to expand...

Dude, you have no idea

TobiasG said:
The good news though is that it can't get any worse. Right?
Click to expand...

TobiasG said:
The good news though is that it can't get any worse. Right?
Click to expand...

Well, that’s because those countries are socialist and don’t have freedom. You see, it’s a choice to protect yourself and others, why should I be forced? Fucking commies. /S

We thought things were bad then, new level of hell now open, come on in.

Who convinced him that it looks bad if he doesn’t even wear a mask while his supporters are dying by the thousands?


The White House is seeking to discredit Dr. Anthony Fauci, the nation’s leading infectious disease expert, as President Donald Trump works to marginalize him and his dire warnings about the shortcomings in the U.S. coronavirus response.

In a remarkable broadside by the Trump administration against one of its own, a White House official told NBC News on Sunday that "several White House officials are concerned about the number of times Dr. Fauci has been wrong on things." To bolster the case, the official provided NBC News with a list of nearly a dozen past comments by Fauci earlier in the pandemic that the official said had ultimately proven erroneous.


Among them: Fauci's comments in January that coronavirus was "not a major threat" and "not driven by asymptomatic carriers" and Fauci’s comment in March that "people should not be walking around with masks."

It was a move more characteristic of a political campaign furtively disseminating "opposition research" about an opponent than of a White House struggling to contain a pandemic that has already killed more than 135,000 Americans, according to an NBC News tally.

Fauci, who runs the National Institute of Allergy and Infectious Diseases, had been a leading member of the White House Coronavirus Task Force and a key communicator with the public about the virus until the president soured on Fauci's sober assessments of the situation, which have increasingly conflicted with the more sanguine picture of a virus in retreat that the president has sought to paint.

In recent days, Fauci has deviated from Trump by disputing that the U.S. is "doing great" and faulting the decision in some states to re-open too quickly and sidestep the task force's suggested criteria for when it's safe to loosen restrictions. In one particularly alarming prediction, Fauci said he would not be surprised if the U.S. was soon adding 100,000 new cases per day— a figure that would reflect an abject failure to slow the spread.

Fauci declined to comment on the White House's attacks.

The White House effort to cast doubt on Fauci's judgment comes as coronavirus surges nationwide, which Trump has repeatedly downplayed as a result of increased testing rather than increased infections. Florida on Sunday reported over 15,000 new cases, the most any state has reported in a single day since the pandemic began. The U.S. on Friday also surpassed 70,000 new coronavirus cases nationwide for the first time ever.

As physicians and scientists have learned more about the novel coronavirus, the medical consensus on how to treat the virus and limit its spread has evolved — and not just in the U.S. Many of Fauci's assertions called into question by the White House official were based on the best available data at the time and were widely echoed by Trump, other members of the task force and senior White House officials.

"When you learn more, you change those recommendations," Surgeon General Jerome Adams, another member of the task force, told CBS News on Sunday. "Our recommendations have changed.”

The list of past Fauci comments compiled by the White House, first reported by The Washington Post, includes Fauci saying in January— weeks before the first reported COVID-19 death in the U.S.— that the virus was "not a major threat for the people in the U.S." A month later, it was Trump himself who told Americans that the virus would simply "disappear" like a "miracle."


The White House on Sunday declined to provide further comment about Fauci. But the signs of the White House's displeasure with Fauci's grim public assessments have been mounting. On Thursday, White House spokeswoman Kayleigh McEnany declined to say whether Trump still has confidence in Fauci, and the president himself said of Fauci that same day: "He’s made a lot of mistakes."

"I disagree with him," Trump added in a separate interview with Gray Television's Greta Van Susteren last week.

The attempt to discredit Fauci comes amid signs of growing tensions between Fauci and the president. Fauci said last week he hadn’t seen Trump in person since June 2 and hadn’t briefed him in person in at least two months.

Fauci, who has served in the federal government for decades, can't be directly fired by the president, and there were no signs that Trump was seeking to get rid of him altogether. Rather, the White House salvo appeared aimed at undermining the public's trust in the renowned immunologist in hopes that Americans will be more inclined to believe Trump's far more optimistic version of events as the November election marches closer.

Throughout the pandemic, Fauci has enjoyed broad support from the public, which got to know the gruff-speaking doctor during his frequent appearances at the task force's televised press briefings—a mainstay of the early response to the pandemic that has since fallen largely by the wayside.

A New York Times/Sienna College poll in mid-June found that 2 in 3 registered voters approved of Fauci, including half of Republicans and 4 in 5 Democrats. Trump, by comparison, enjoyed support from only 1 in 4 voters in that same poll, including just 4 percent of Democrats.

Another member of the coronavirus task force, Admiral Brett Giroir, added to the Fauci pile-on today when he told NBC's "Meet the Press" that Fauci has not always been correct.

"I respect Dr. Fauci a lot, but Dr. Fauci is not 100 percent right and he also doesn't necessarily, he admits that, have the whole national interest in mind. He looks at it from a very narrow public health point of view," Giroir said.
Click to expand...

Let it be known that from now on until the US gets this shit under control, fuck this country.
Last edited: Jul 13, 2020

'I thought this was a hoax': Patient in 30s dies after attending 'COVID party'

THATS IT SHUT HER BACK DOWN!

The state ordered all 53 counties to close indoor activities at restaurants, wineries, movie theaters, zoos, museums, card rooms and all bars. Each county on the state’s coronavirus monitoring list … must also close gyms, places of worship, offices in non-critical sectors, hair and nail salons and indoor malls in addition to the statewide closure
Click to expand...

So if California is shutting down the country probably should go back into quarantine too. So expect to see that in a month or so when the President catches up.