Actually, this is more like what you were thinking of: Especially that last one... The wheels/tires are too bright and don't fit the lighting. :lol:

So this happened tonight... 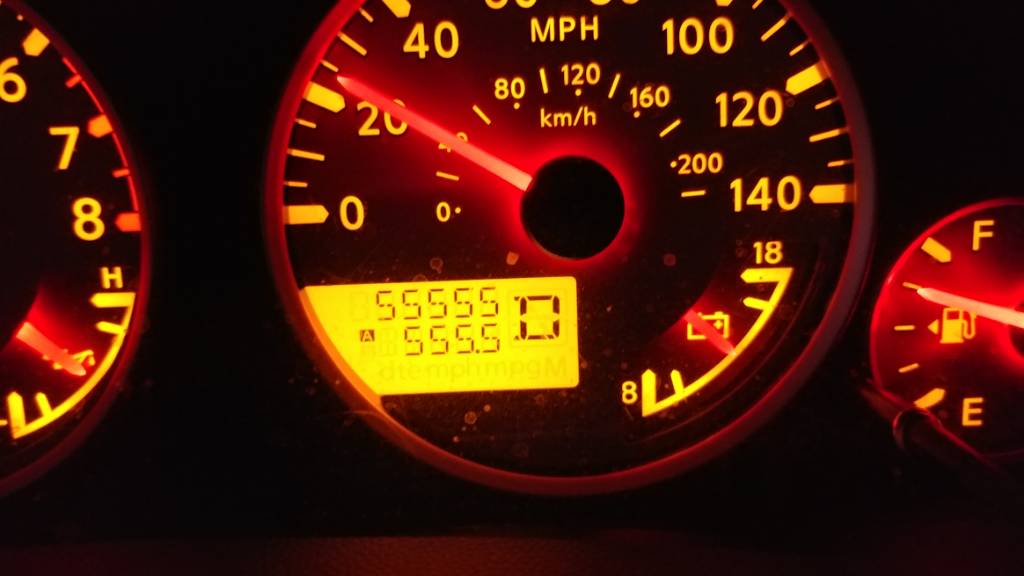 Is it an OCD thing? Not that I wouldn't do it myself I'm genuinely curious!

I actually use trip A for each tank of gas and trip B for oil change intervals.

Doesn't that thing tell you when it is time to change the oil? I thought just about everything made in the last few years did that.

Nope. Keep in mind this design dates back to 2005 without any major revision.

Long time, no update. In the last two years I have:

Hauled some work benches and a rather pink Mustang.

Lost my wheels, but they were returned with new tires.

Put the truck on a coal fire ferry across Lake Michigan.

Drove to a caboose in the woods.

Parked in an appropriate parking spot.

Went to Dallas and picked up a Mustang.

Went to Arkansas to pickup another Mustang.

Went to the Upper Peninsula (twice).

Beyond that, the truck is still just as good as mile one. It's at about 93k miles currently and all I have done is put gas in it and change oil. It will get it's first set of plugs, Sunday.

Been a few months, so I thought I'd update this thread. Since our last installment I have.

Driven through a blizzard in Arizona.

Then bought gas and Mexican food in a small town.

Went camping in the mountains of New Mexico.

Bought back an old friend.

Got the truck a little muddy.

Still been a really good truck to me. Does everything I've asked and more.

Kid I sold to sold it back to me, I have a few things to fix before I put it back on the road.

I've wanted a camper shell (topper, cap, whatever you call it) for a long while, but never could seem to be in the right place, at the right time to buy one that would fit.

So I did the next best thing, bought one that doesn't fit and modified it to fit.

This is an ARE DCU, from a long bed Frontier. That means it was about a foot too long for my truck. Set Sawzall to cut!

Picked it up at a dealer about two hours north of me in the small town of Harrisonville, Missouri. The dealer removes any campers or tonneau covers that are on a truck when they buy them at auction. Then one of the parts guys lists them on Facebook Marketplace.

First was the test fit. Indeed it was too long. Turns out it was exactly 14.75" too long.

Here we are about ready to test fit the shortened version, but first the tailgate needed removed. That turned out to be more than I expected. After much swearing and cussing, the bolts that held the hinges on were removed and...

It fits. Thus ended Monday. Tuesday was just finalizing shortening the frame, getting the front tin and trim back on. That took a couple hours and I didn't bother taking any photos.

That brings us to this evening. I got home about 6 and worked on it until it was done. First I shortened the side doors. This wasn't too difficult. I was tempted to shorten both ends, but that would have doubled the amount of time it would take, so I just shortened the front of each door. That offset the handle, but... Eh, whatever.

Lastly, I also shortened the shelf that was installed on the passenger side and reinstalled.

I also removed the stock backup camera out of the tailgate and fabricobbled a mount for it on the license plate. It's weird being that low, but it's better than not having one.

I still need to wire up the brake light and the interior lights, but I'm waiting on some parts for that to come in.

There's also a bunch of other parts on their way, things I've wanted to do since it was new. More content next week!
Last edited: Jun 19, 2020

Nice job! Almost looks factory. I would also have cut only one end of the doors. Close enough.

Here's a sneak peak of the parts going on the truck next week.

Crazyjeeper said:
Nice job! Almost looks factory. I would also have cut only one end of the doors. Close enough.
Click to expand...

Thank you. It was simple, but time consuming. Going to work on the wiring now. Want the new 3rd brake lamp to work as well as the interior lights that were already in the camper.

The camper is just about as done as it's going to get. I've got new locks to install, but they are going to take a little extra effort to work. They will take the truck's own key, which is nice.

I added a few extra lights, no particular reason, except I'm weird?