Most of you are probably already aware that I've replaced the 919 with a GS, but figured I'd make a thread about it.

After selling the 919, I was struck with replacement bike fever, even though with the proceeds from the sale of the 919, I could have gotten a locker and some nice bumpers for the Lexus. But a new to me bike would be more fun and I'd use it frequently.

Per usual, I waffled from one extreme to the other: Moto Guzzi Grisos and older V11 Sports, Ducati Streetfighters, Aprilia Tuonos, maybe even a track bike or a dirt bike. But every once in a while, I'd pull up a few listings of boxer BMWs. It started with sportier (okay, sporty for BMW) stuff, R, S, and RS model boxers...then I started looking at GSs.

It just so happened that there was a nice '99 R1100GS SE that was listed on a local forum, so I went out and took a ride, but I found it too agricultural and it came with no farkles aside from auxiliary lighting. In talking with the owner, I'd found that he'd pillaged all the nice parts off of it for his main ride. He wanted reasonable money for it, but given the high miles (81k) and that I'd have to do some shopping for bits and bobs, I passed. Another seller of a decent looking GS close by flaked on wanting to sell the bike, but there was a guy about an hour away that had a listing. @Crazyjeeper and I blasted over in the Mustang (may have chased a RCF on the way over ) with my gear in the trunk to check it out.

It was really clean, had relatively low miles (55k) and had nice Jesse bags and some important work (LH cam chain tensioner) done. The owner was an older gentleman that had hurt himself too many times on his KTM 500 and had just sold that KTM this morning to get rid of the temptation. We looked over the bike and it was in great shape, but I noted that it would need new brake lines and a new battery. He fired it up to demo that the ABS worked, there was just a fault in the system. Well lo and behold, when he turned back into his driveway, it died. Between the three of us, we did some diagnosing. No spark. The gas was also suspect. CJ and I made a 40 minute roundtrip to Autozone and picked up a set of spark plugs and starter fluid while the current owner drained the gas and filled it up with gas from another station. Still no dice. I knew in the back of my head it was probably the hall effect sensor (basically a crankshaft position sensor). The owner was ready to move it out though and I got a helluva deal. He was a class act and great seller to buy and I couldn't be happier with how things worked out. So with that, CJ and I rocketed back to his place in record time, swapped for the truck and drove back to collect it. 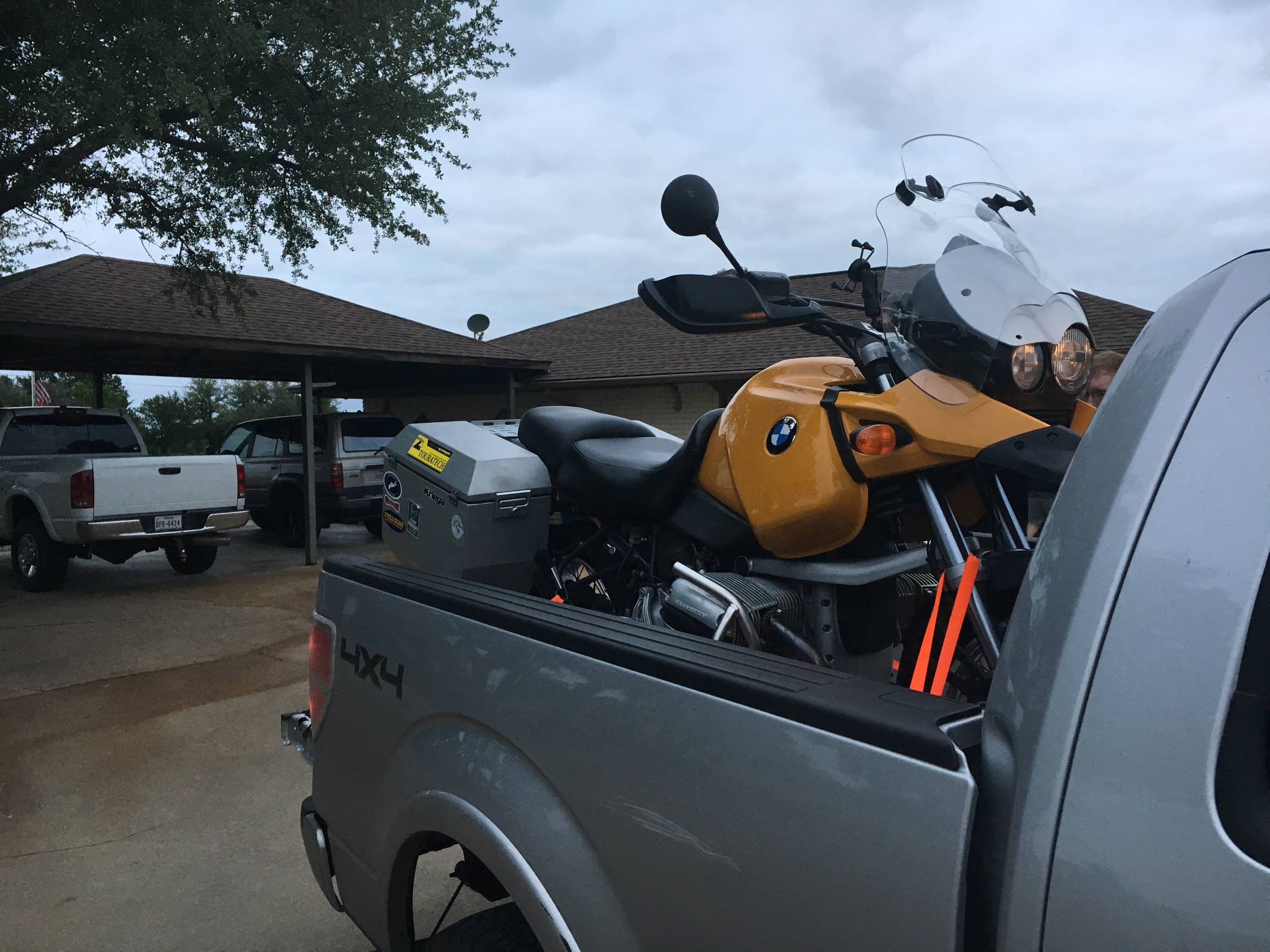 After I brought it home, I set to work on the repairs. Replacing the HES required removal of the tank, so here's a nudie. 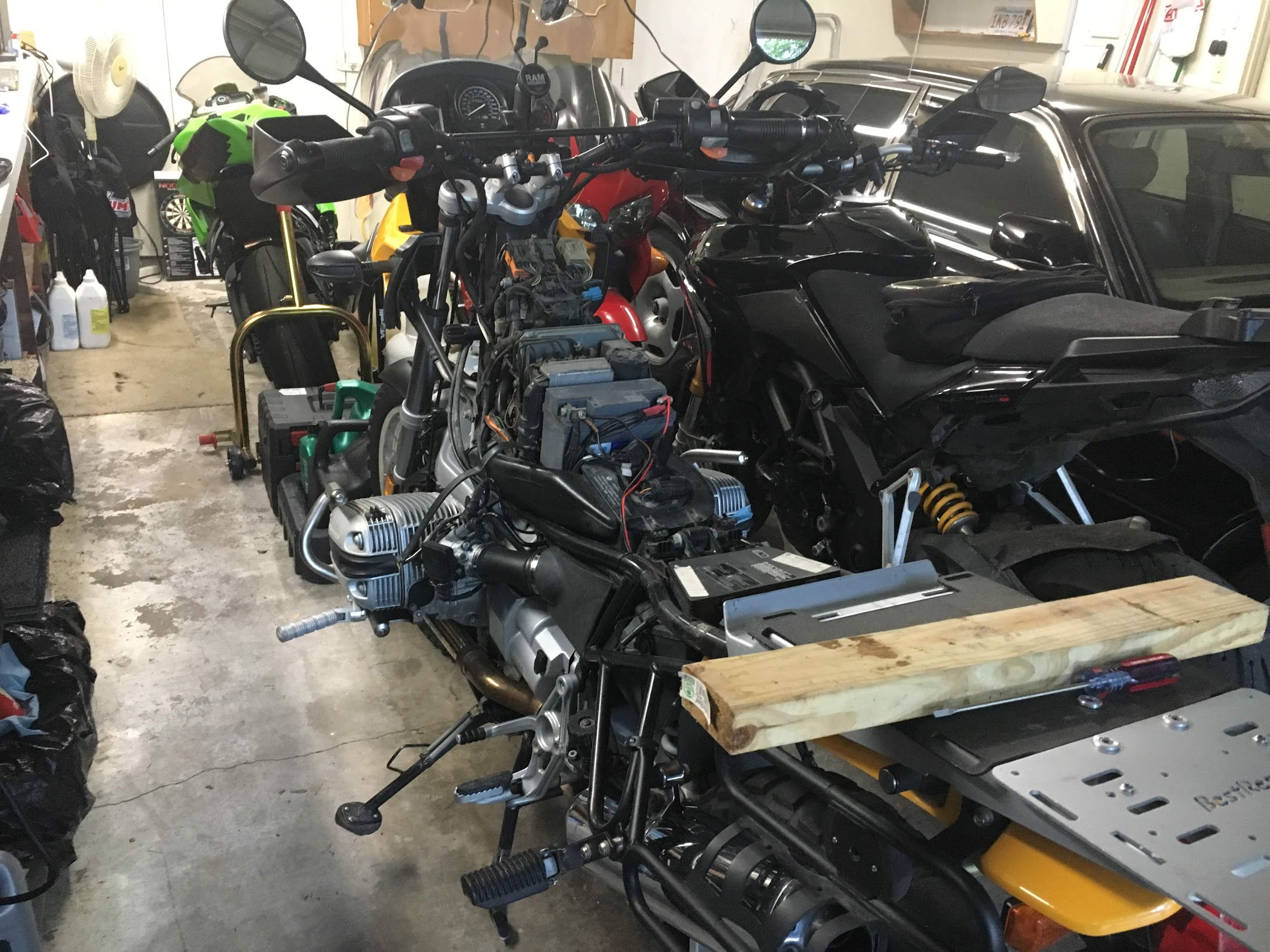 
So far, I've swapped in a new battery and changed all the fluids on it. Annoyingly, the new battery did nothing for the ABS, so I suspect the module may be toast. Also, bleeding the brakes is way more of a pain than it should be courtesy of zee BMW specialty tool BS. I feel like the oilhead era of Beemers was the beginning of the stupid tools (thankfully pre-CANBUS though) to make things more annoying for the home mechanic. Case in point, the right caliper does not have a bleeder screw, but rather a grub screw and this weird canister. Of course, BMW sells the proprietary bleeder screw for $9. This same screw also allows you to bleed the clutch as it has the same stupid grub screw at the end of a hose

But I'll be damned if I don't enjoy farting around on this bus. It's comfy, cruises nicely, is quiet (well those Shinkos start screaming at about 70), and feels like a quality machine next to my plastic fantastic Multi. 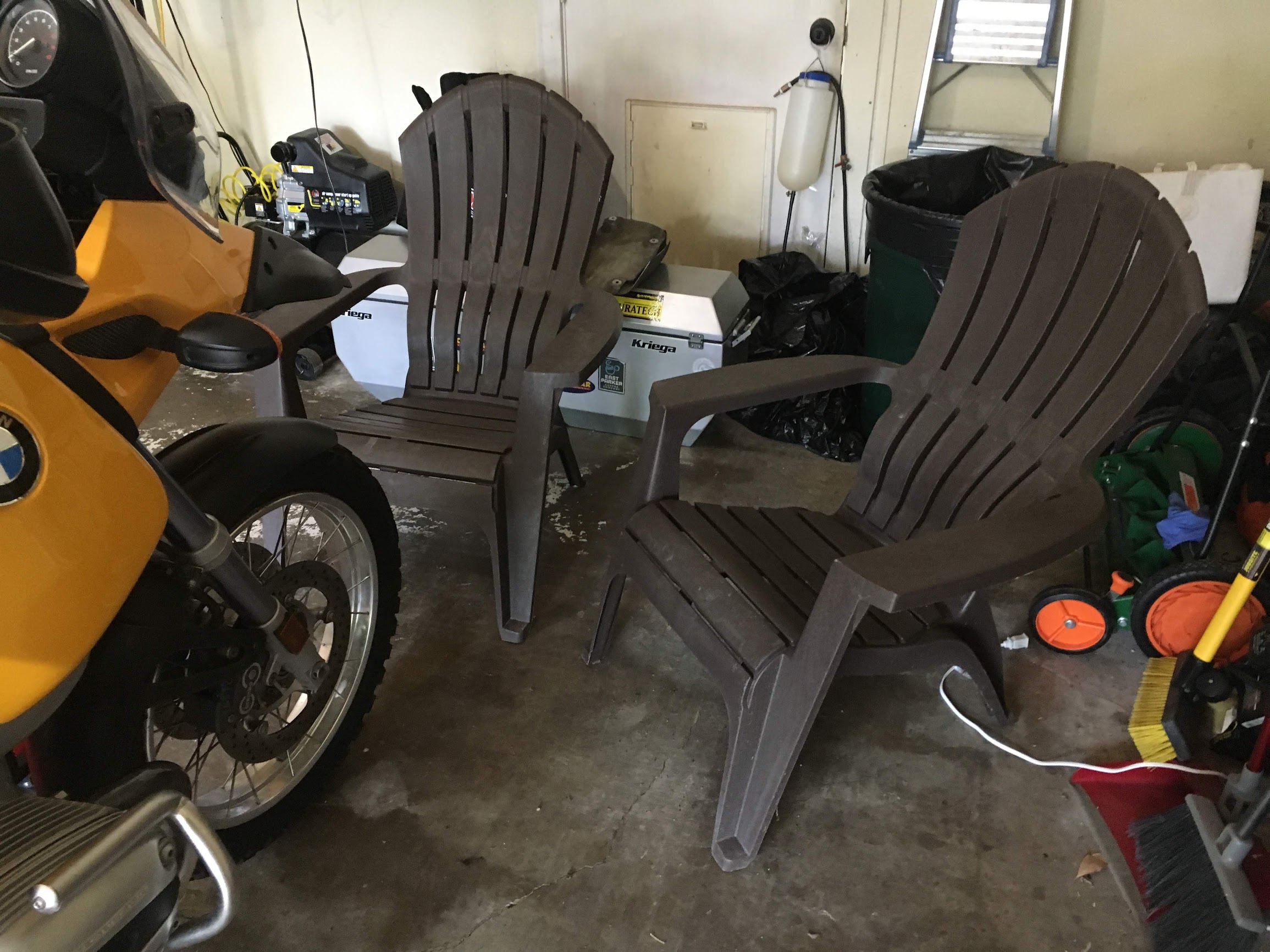 Had to clean all those stickers off except for Heisenberg. Goo gone to the rescue. Jesse bags are really nice. Thick aluminum, stout, but light. 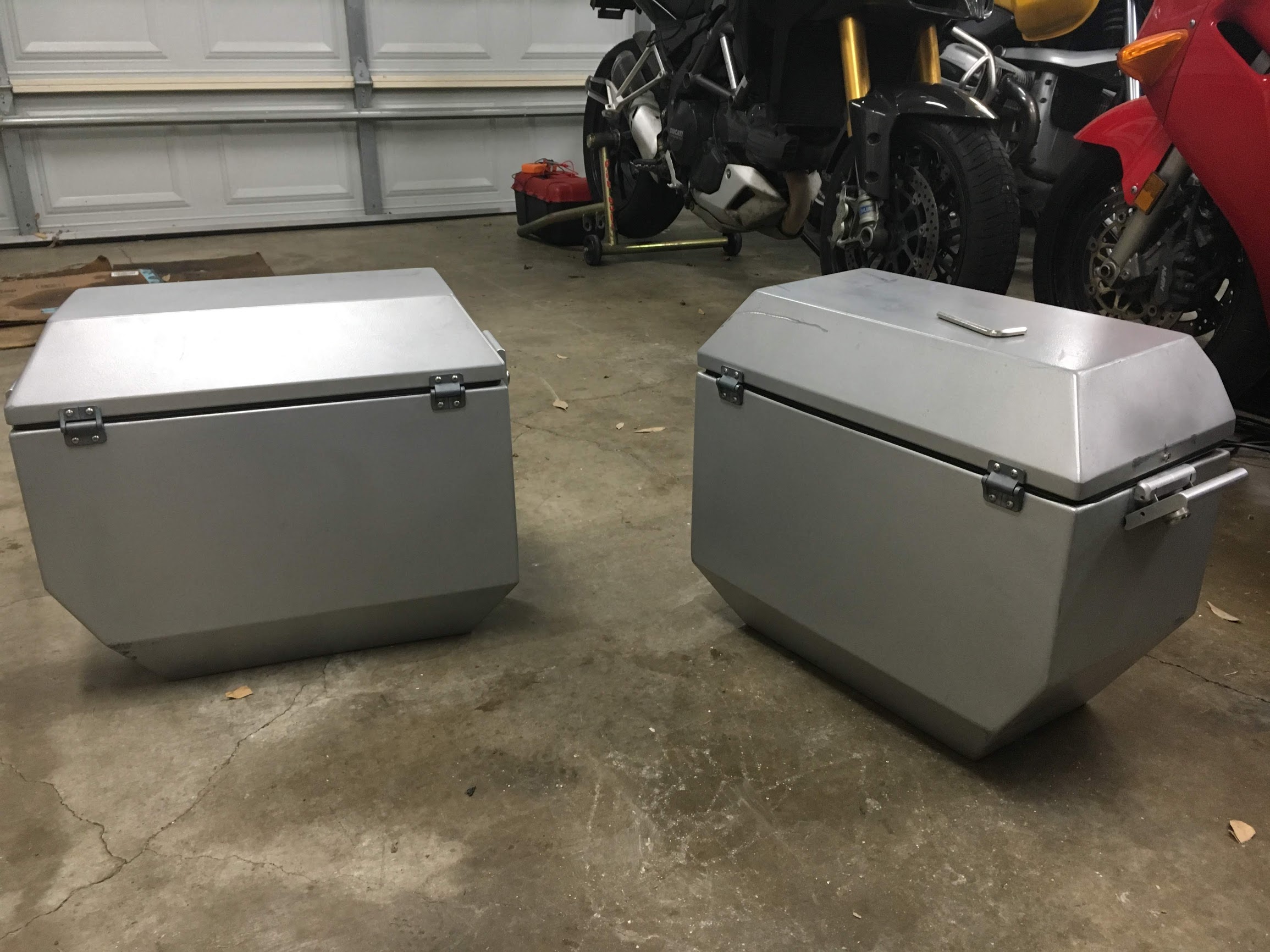 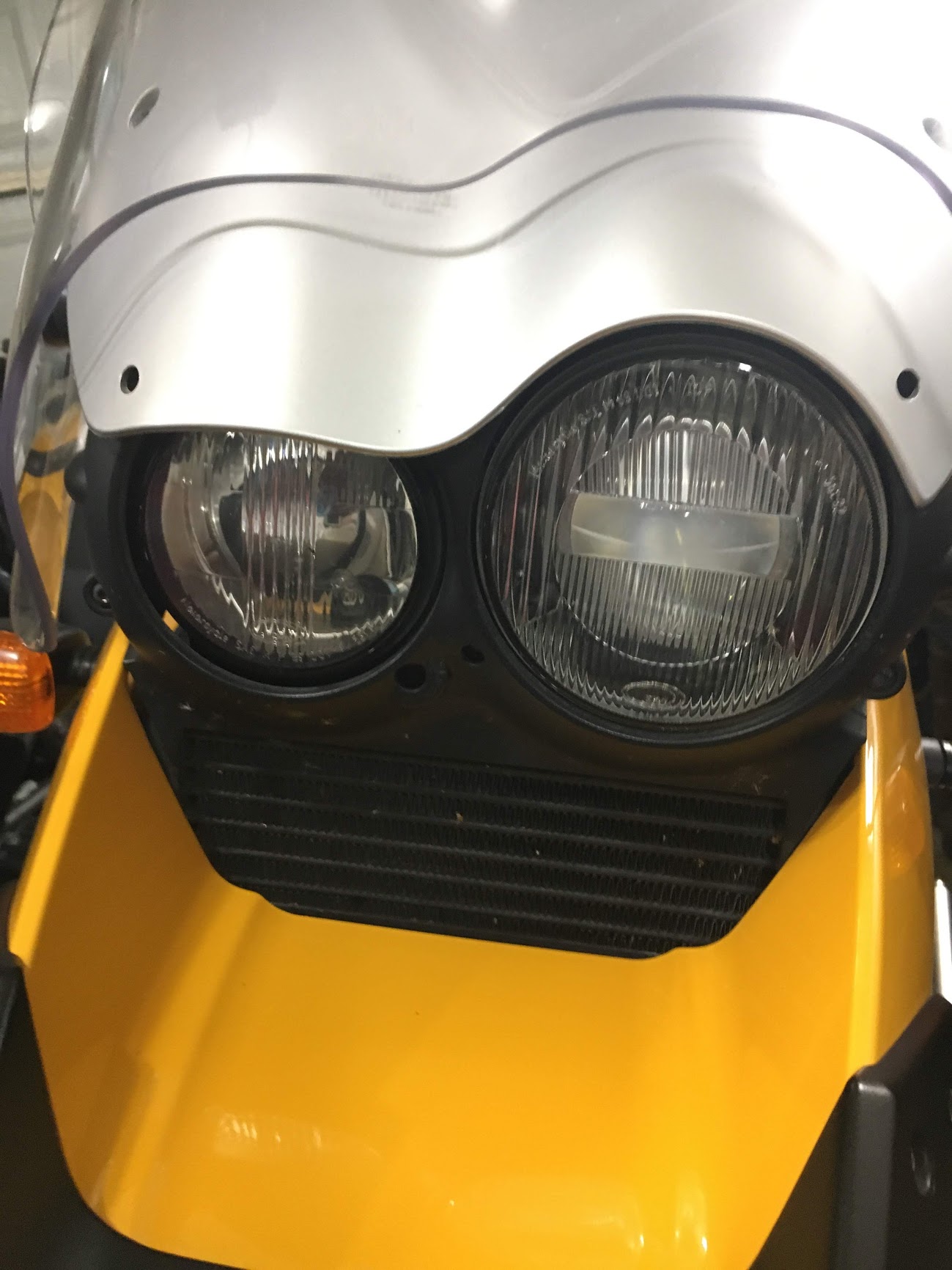 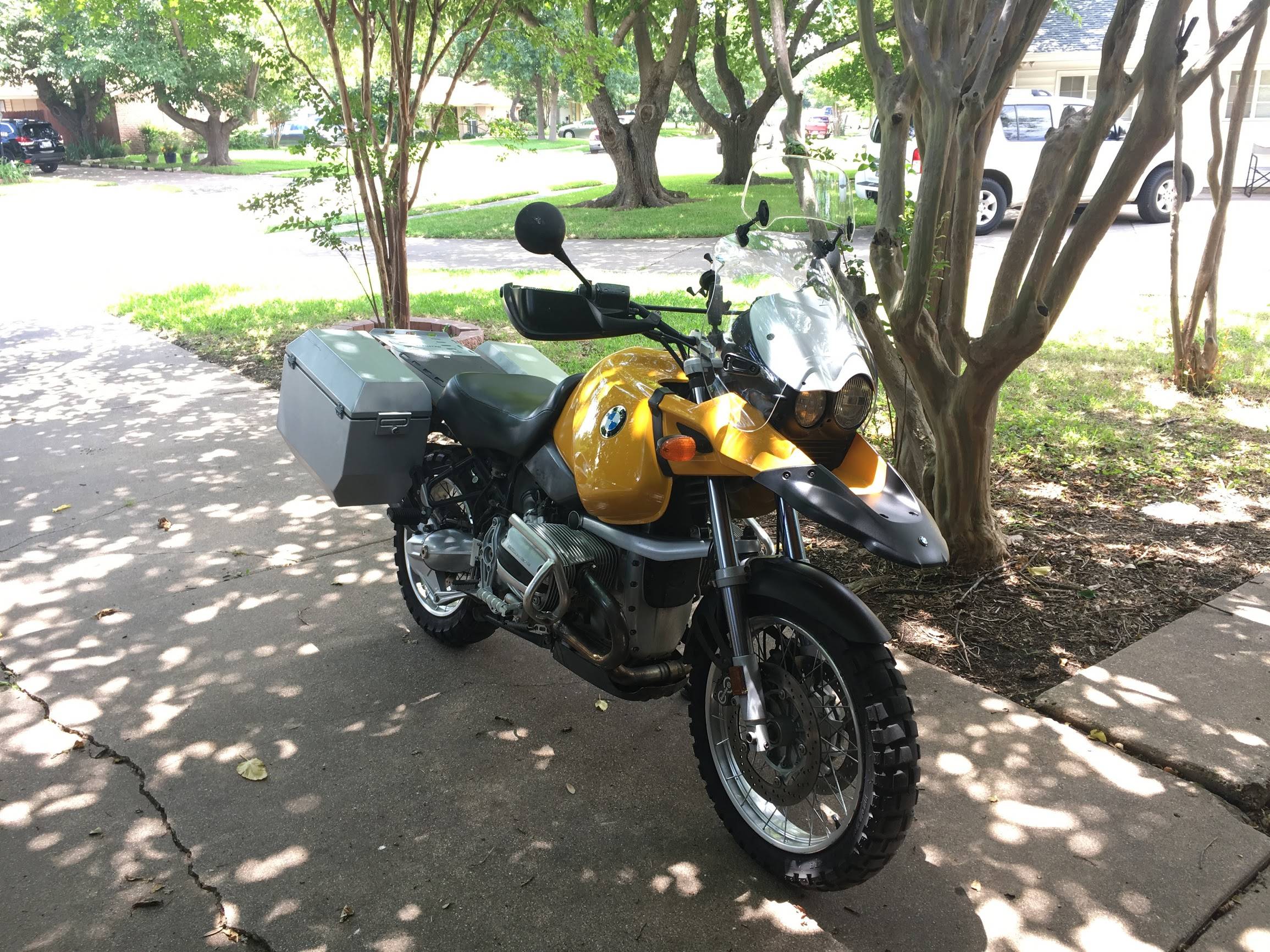 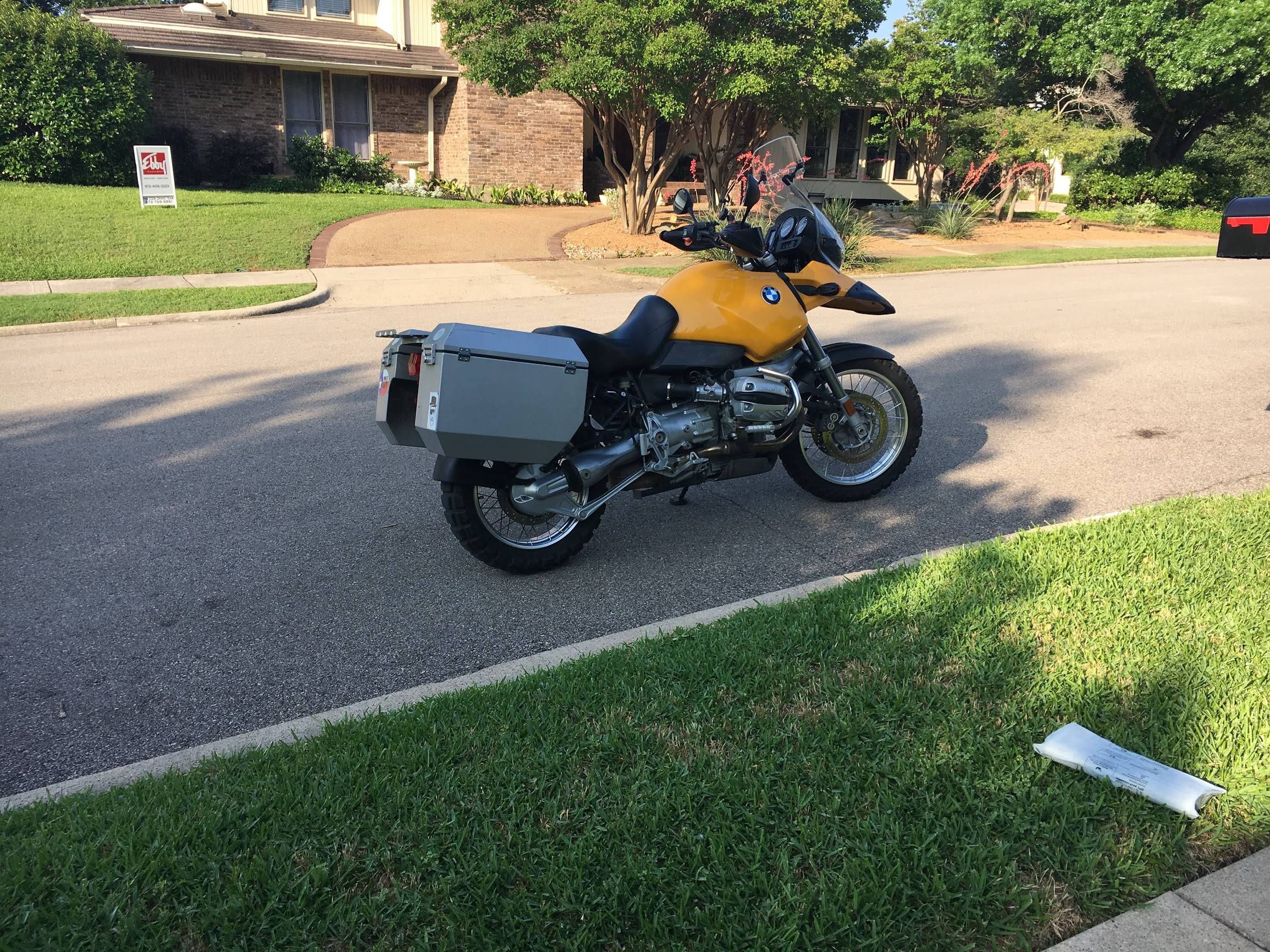 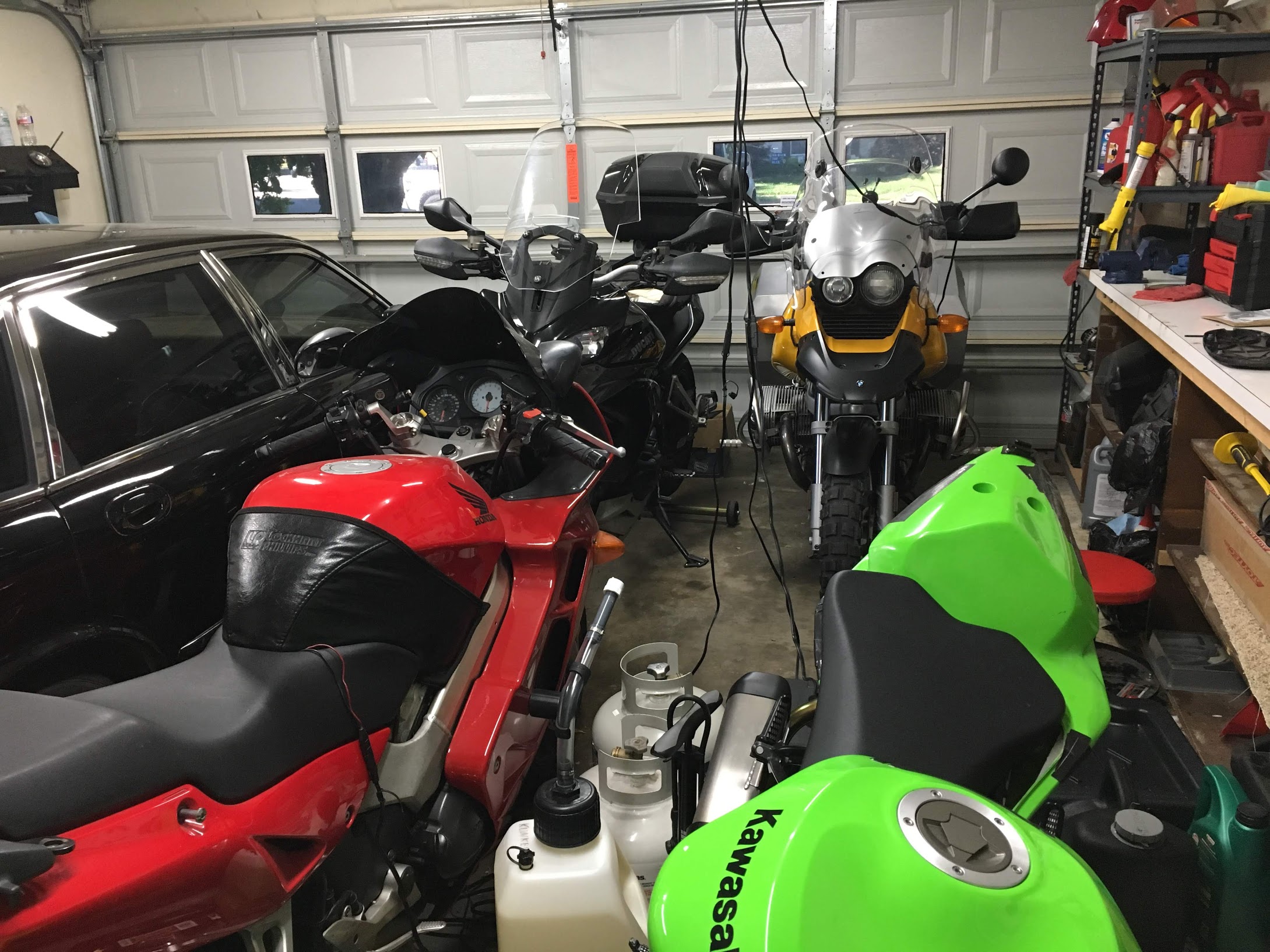 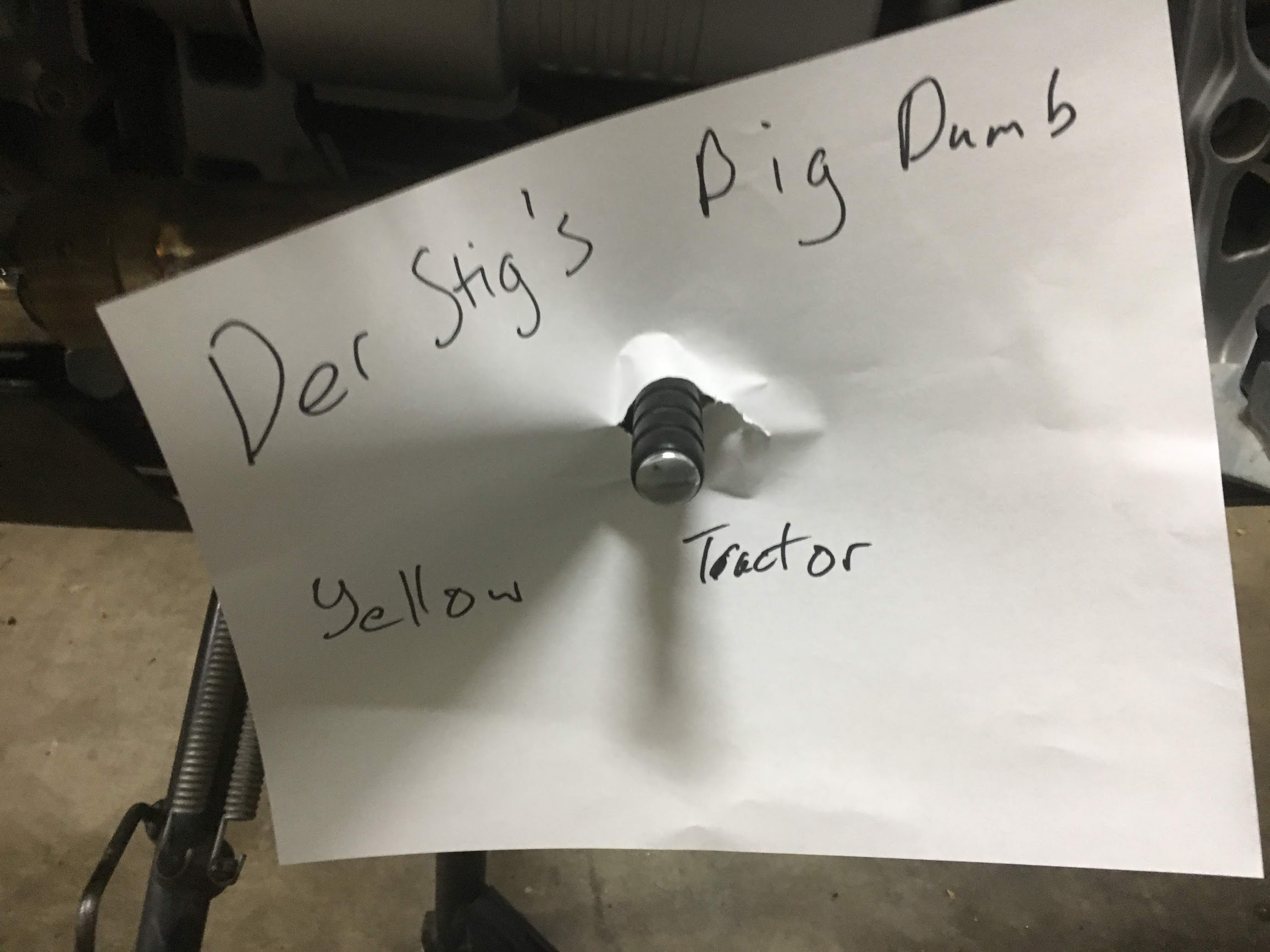 This reminds me we need to replace that hex key that was, uh... overextended during use

My car is Greener than your car.​

Nabster said:
This reminds me we need to replace that hex key that was, uh... overextended during use

Pro tip- if you lock the fly wheel with a 1/4” hex key, don’t forget to take it out before trying to start it, then try it three more times before realizing you dun goofed.

Added more farkles in the form of a wooly seat cover (Alaskan Leathers literally saved my ass (tm)), PIAA LED auxiliary lights, and a migsel GPS speedo mount and hardwire for my Garmin. In an attempt to keep the bike from catching fire, I also added a Fuzeblock.

Thanks to @Crazyjeeper for the seat cover recommendation until I stop being poor and have a Russell Day Long made and to @Nabster and @Spectre for the wiring help.

Farkles were added last minute in prep for a trip with @Nabster to Colorado by way of New Mexico back in September. The Gummikuh did the whole trip without any problems. This is the one where I ground off the right side highway peg and almost bought him a new windshield

Oooh, yeah... you guys really planned this road trip well! This is a good combo of color!!

I kind of want a turn on it some day, I have no love for the 1200, but I very much like the 1150 for some reason.
No trees were killed in the transmission of this message;
but a stupendous number of photons and electrons were terribly inconvenienced.
​

Your experiences reflect mine. First boxer I rode was an 1150 RTP and I enjoyed it, even though it was a rough example. Then I tried an early 1200 GS with the servo brakes and felt no love for it. Then I tried an 1100 GS and that was too agricultural.

The 1150 oil heads are just right. The Kool-aid tastes right. Love mine.